Matthaus: "I Am The Best"

Lothar Matthaus has once again sparked uproar and controversy in the football world, by claiming that he is the best current manager in the game. He has only been back in management since 2012, but has had great success with Portuguese champions Sporting Lisbon, Manchester United, and Italian giants AC Milan. This comes in the wake of rumours that Matthaus may be looking to take a break from management at his current post with Europa League winners AC Milan.

Many who know Matthaus have said how he has told them about a great tiredness after an exhausting two seasons with three different teams in three different countries. He rose to success by winning four trophies in 2012-13 with Sporting CP, winning every game in the process. He then moved to England, and joined Manchester United late in 2013, but was unsettled, and left just three months later to replace the sacked Pellegrini as AC Milan boss. He staged a big recovery at Milan, and managed to finish as runners-up to Juventus, and also win the Europa League against Lille in Turin. Many expected him to build on this success and win the title with Milan this season, especially after making key signings in the summer, such as Antoine Greizmann from Sociedad. He took over Chile, and started well with them, before suffering his first loss in over two years away to Spain in September.

It was indeed after one of his Chile games that Matthaus has made this bold claim about being the best of them all. He had just watched his side stage a good comeback to win 2-1 against Australia, before taking a press conference post-match. One journalist oddly asked how Matthaus thought he compared to some of the other great managers, to which the German manager replied "I certainly don't think that I am one of the greatest managers of all time just yet. I've only been successful for the past couple of years, whereas some of the greats have been in jobs for years and years, accumulating great success. I want to emulate that in my career, and especially here at Milan. I think here at Milan I have bought youth to really dominate world football over the next few years, and I want to be here to see it happen. I think with me at the helm we can certainly accomplish greatness. Onto your question, I think right now, I am the best manager in the world of football at this present moment. Sure there's manager's like Conte who will win the league every year, but once you get the hang of that, it's easy. What I did last season with Milan was difficult, taking us from 6th in February to 2nd at the end of the season, and also winning the Europa League. Lille are a tough side, but we managed to beat them without too much difficulty. I still think I can improve as a manager, but I'm not quite sure how to achieve it just yet."

After this press conference, angry managers and players took to Twitter to tweet their outrage at the comments made by Matthaus. Players such as Joey Barton was one of the main culprits to this, after typing out at least six strongly-worded tweets, only to have his account blocked after several Rossoneri fans reported the former Newcastle midfielder. Many managers, however, tweeted their respect for Matthaus both as a player and as a manager, and spoke of their desire to continue his success as a manager.
Login to Quote

Blue:After this press conference, angry managers and players took to Twitter to tweet their outrage at the comments made byMatthaus. Players such as Joey Barton was one of the main culprits to this, after typing out at least six strongly-worded tweets, only to have his account blocked after several Rossoneri fans reported the former Newcastle midfielder.

Lovely update, will be a great shame to see this end (if it does, which I like to think it won't).
Login to Quote

Blue:Many managers, however, tweeted their respect for Matthaus both as a player and as a manager, and spoke of their desire to continue his success as a manager.


Andrei Kanchelskis, Rubin Kazan manager, has been one of the first to praise Lothar Matthaus, as both a player and a manager. Kanchelskis stated the following:

"Lothar is one of the greatest people in football. He was an exceptional player, but an even better manager. It was Lothar who inspired me to become a manager - his wonderful life story and the way he presented it to the world. The way he managed at got teams together is unthinkable - it was truly magical.

I would like to praise Lothar for his exceptional work done as a manager. To me, Sporting have become a legendary side, that all teams should be scared of, and because of one thing. The way Lothar managed, and changed them. Every team Matthaus has managed have changed for the best because of him, and because of this, I hope Lothar will carry on as a manager.

I do not only see him as a manager, I see him as a friend, I see him as a legend. Lothar, whatever you decide to go with your career, who have gained my eternal respect. Thank you for your inspiration, well done on your success, and may your managerial legacy live on forever.

Someone's a bit full of himself.

Justice
9 years
Who is Matthaus?

Blue
9 years
Guys, I just want to say thanks for all the support throughout the story. I hope you'll all be following my next venture with Hajduk Split

BeanyUnited
9 years
Good update there mate! Nice way to make Matthaus sound like the Special One

I will definitely be a follower of that. A great new challenge for you.
Login to Quote

Matthaus To Take A Break 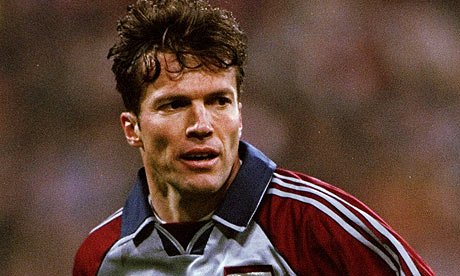 AC Milan manager Lothar Matthaus is to take a short break from the job, his club have confirmed. This has been rumoured for a while, but until no there has been no indication from either manager or club over whether these whispers have any truth behind them up until now. There is still no indication as to why Matthaus is choosing to take a small break from management, although many expect it is due to stress. He has moved countries three times in the last two years, and this is putting a considerable amount of strain on his family. His last two moves, to Manchester then Milan have seen him moving on his own, and his family staying in Portugal. It has been almost a year since he left Lisbon, and has seemed lonely in recent months. He is expected to spend his break back in Lisbon visiting his family.

The reason Matthaus' family stayed in Lisbon when he moved to Manchester United is also unclear, but sources close to him have been quoted as saying that it is so that his family do not rush into the move, and end up unsettled in an area they are uncomfortable. Indeed, Matthaus himself was unsettled in Manchester, which is why he jumped at the opportunity to move to AC Milan in February. He has enjoyed great success since he joined, winning a European trophy, and guiding his team to second in the league. In recent weeks, Matthaus has been dropping hints that he wants to stay at Milan for a long time. This could be just the sort of indication Matthaus' family need to move to Milan.

A statement on Milan's official website read "AC Milan can now confirm that first team manager Lothar Matthaus is to take a short break from the job, to return to Portugal and see his family. He has been suffering loneliness in recent times, and we all hope this short break will help him recover and come back better than ever. Assistant manager Mauro Tassotti will take control of the first team until Lothar deems he is fit to return to work. We all wish him a quick and speedy recovery."

Whilst on his short break, Matthaus is also expected to spend time watching his good friend Niko Kovač take on a new challenge with Hajduk Split in Croatia.
Login to Quote

JasonRM
9 years
Sad to see this go, but I think Hadjuk could be even better!

Gashead
9 years
Fantastic update. A nice way to put a break on the story, hopefully it is just a break and we see the return of Matthaus!

Looking forward to seeing your new story with Hadjuk Split.
Login to Quote