LiamB
7 years
Good luck for the season ahead mate!

keep it up.
Login to Quote

Jamesg237
7 years
Good luck for the seasonahead Madrista. You deserve success this season so stick at it and I am sure it will come your way! GO AJAX!
Login to Quote

A pretty good month for us, as we start off the season with just two losses. We had a good start to the season with a 1-0 win over FK Austria Wien, in which Marko Marin scored his first goal for Ajax. We continued our winning form against VVV who we trounced 5-0, with 5 different people scoring. We finished off Austria Wien at home with a solid 3-1 victory, 4-1 on aggregate. After a 1-0 win against Utrecht, we suffered our first loss of the season, in Russia. Rubin beat us 4-3, but we did come back from 3-0 down to give us an almost assured win at home. Then, another loss, a devastating one against league leaders FC Twente. We started off the game by hitting the post and then taking a 1-0 lead through Siem De Jong. Twente came back to scored 2 straight goals. In looked like we had tied it up again in the 60th minute, but the ref called Marko Marin's crucial goal offside. We would tie up the game in the 86th minute, but Twente scored a 90th minute stunner to end our league winning streak. We regained some of our dignity against Rubin, who we trounced 3-0. We are currently in 7th with a game in hand, but a win over Vittese will push us up to 4th in the table, so it's a crucial game! 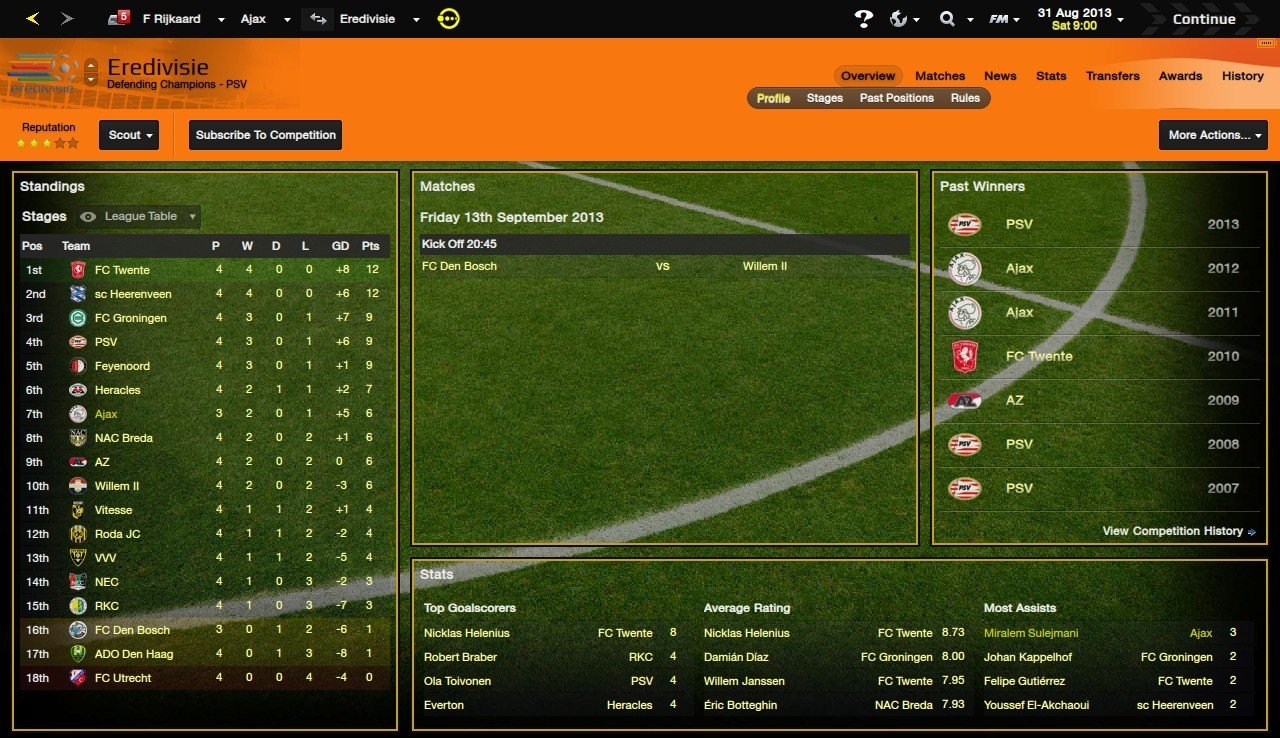 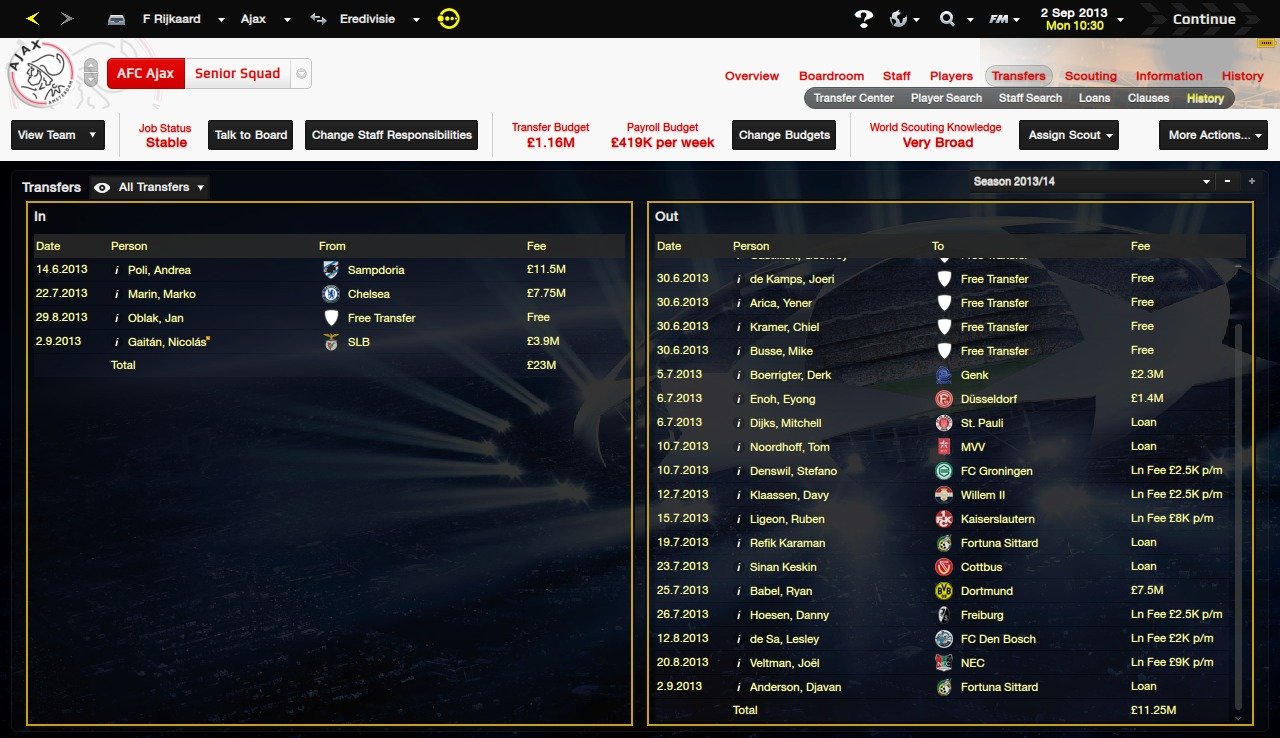 Andrea Poli: Andrea is a talented Center midfielder who can pass very well. Poli and Erisksen will be the hub of the team in the middle and for us to win, they need to play well. Poli will be a key player this season. He cost 11.5 million pounds

Marko Marin: Marko Marin is a pacey winger who I'm counting on to score lots of goals this year. He plays in the winger role, with lots of open space on the left, and if he plays up to his potential, he can b our top scorer this year. He cost 7.5 million pounds

Nicholas Gaitan: Gaitan is an attacking midfielder who can control the game and score important goals. Right now, he's back up to Enzo Perez, but Gaitan will start now that Perez is injured for 3-4 months. He cost 3.9 million pounds

Jan Oblak: A goalie with ok potential that I signed for free.

Ryan Babel: Babel, a pacey left winger that is 26 years old, left for 7.5 million pounds to Dortmund. Babel played ok last year, but with Marko Marin coming in, he was no longer needed and we'll be glad to get rid of his high salary.

This attacking left midfielder was unhappy all of last year and heads to Genk for 2.3 million pounds. He wasn't starting and I'm glad to have him gone.

Eyong Enoh: Enoh got offloaded to Dusseldorf for 1.4 million pounds after playing poorly all of last year and getting sent off against PSV in one of our last games. 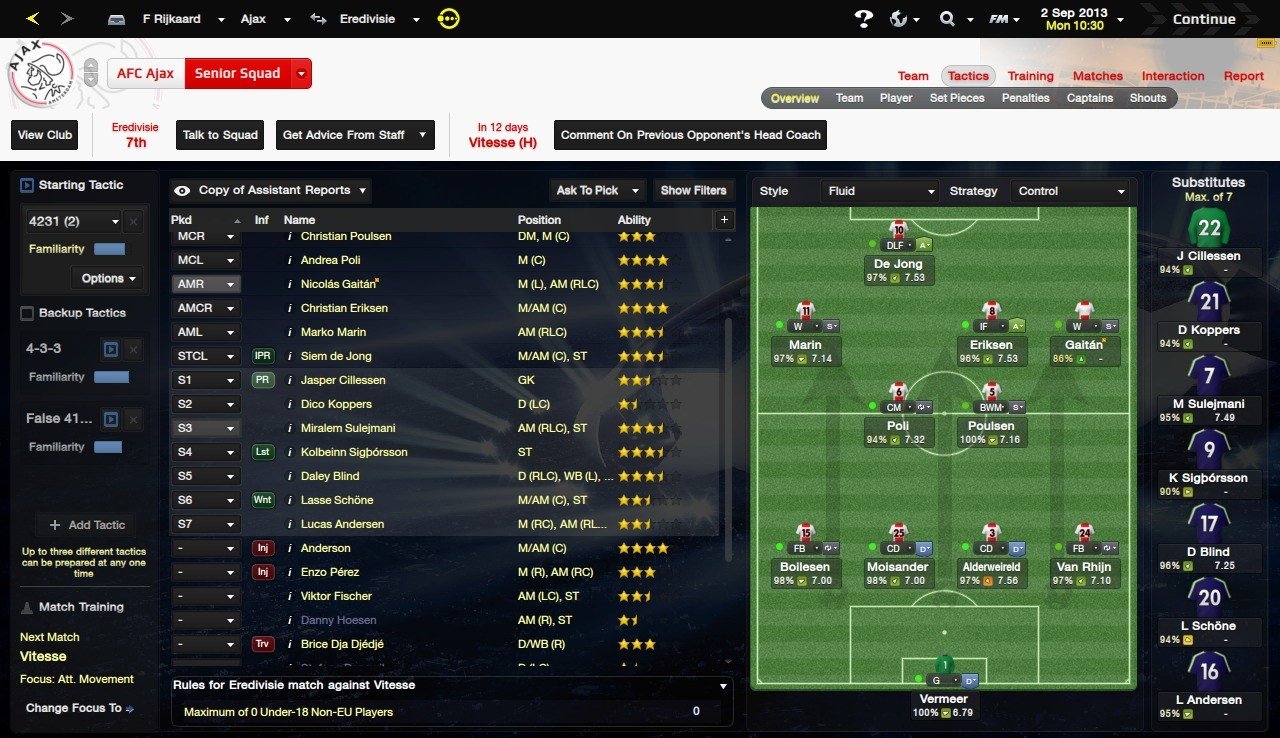 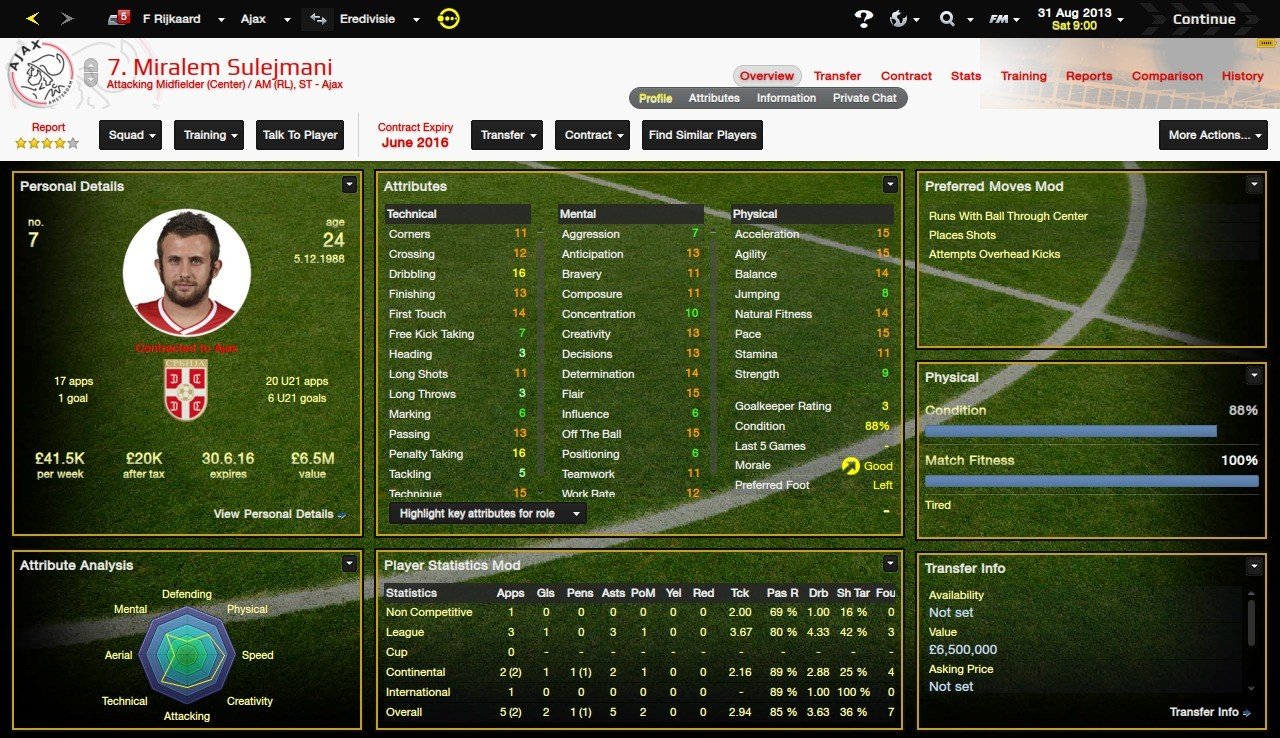 Miralem Sulejemani, who scored 2 goals and had 5 assists this month.
Login to Quote

Blue
7 years
Could have been a much better month in my opinion, but it'll improve

Joe
7 years
Can you post a screenie of Eriksen?? Good to see how he will improve

I hope all the sports betters keep placing their bids on Ajax. They've looked ok at times, but their defense if vulnerable and if FC Twente was able to beat them in Amsterdam, then I expect the best sides will be definitely be able to beat them away. The team lacks a killer instinct, when their are opportunities, Ajax are to cautious and can't push forward and score goals. Siem De Jong can't win games on his own, and I expect the loss of Ryan Babel to hurt the team. If I were a sports better, I'd put my money on Twente, because they have that killer instinct that Ajax can't seem to find.
Login to Quote

Blue
7 years
I reckon you'll come out on top anyway

Pistolero to stay at Liverpool! Anyways, get Fischer and Andersen playing in your second tactic because they are wonderkids and great players!
#AjaxForGlory
Login to Quote

You are reading "Ajax- Total Football".