After Obi Anouro left, he failed to sign for a club and he has since retired, unfortunately

Chris
9 years
Dayum, 50K views is alot of views, keep going at it you Vauxhall Motors legend!
Login to Quote

CRW5252
9 years
Whilst I was on holiday I wanted something to read whilst lying in the sun, this story was perfect so thank very much!

Although I'm no Vauxhall legend

No need to thank me for it


Our first half of the season was very impressive. We were second in the league, just behind Manchester United, and we had easily qualified for the latter stages of the UEFA Champions League. I had quite a lot of players to offload, whether that was through selling them or loaning them out. Here is the total list of players leaving the club: 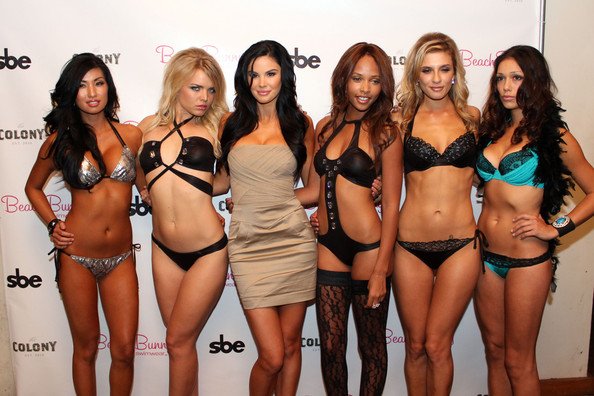 This picture may be misleading, so I will make myself clear. We did not pay any of these women any money for sexual intercourse or anything as such! However, we did upgrade our training facilities and our youth facilities. They are now both of a high standard, but they are not yet the best around. I will be looking to invest more money in to these facilities in the future.
1
Login to Quote

Jer
9 years
Dibs on the blonde of the left..
Login to Quote


It's not just you mate.
Login to Quote

wellsy1498
9 years
I really really don't get that picture one bit. Is it me being stupid?
Login to Quote

@wellsy1498, it's just in to fill up the update lol
Login to Quote

Hey guys, so here is the second half of our 2023/2024 season. By the end of December, we were second in the league behind favourites Manchester United, but we had won six of six Champions League group stage games to see us go through top of our group. We were, unfortunately, knocked out of the Capital One Cup. Satisfied with the current squad, I did not purchase any players in January, although fan favourite Gary Gardner departed for Tottenham Hotspur in search of playing more regularly. Having already won the Community Shield, we were looking to add to our trophy talent this season, with three of the biggest club competitions up for grabs. 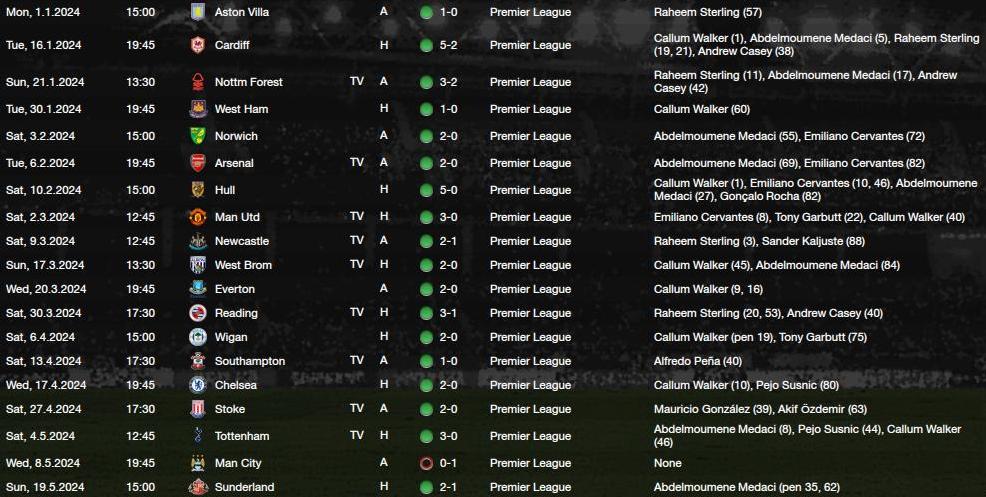 I don't there is much more to say than wow. We played unbelievably well in the second half of the season, winning eighteen of our nineteen league fixtures, and losing just one. I think the most impressive results were beating Arsenal 2-0 at the Emirates, and beating Manchester United 3-0 at home. Our only slip up was against Manchester City away from home, which is no surprise considering the ability of the Manchester City team. We scored forty-three goals since January, and conceded just eight. I am delighted with how we performed, and I can only dream of playing like this in future seasons. 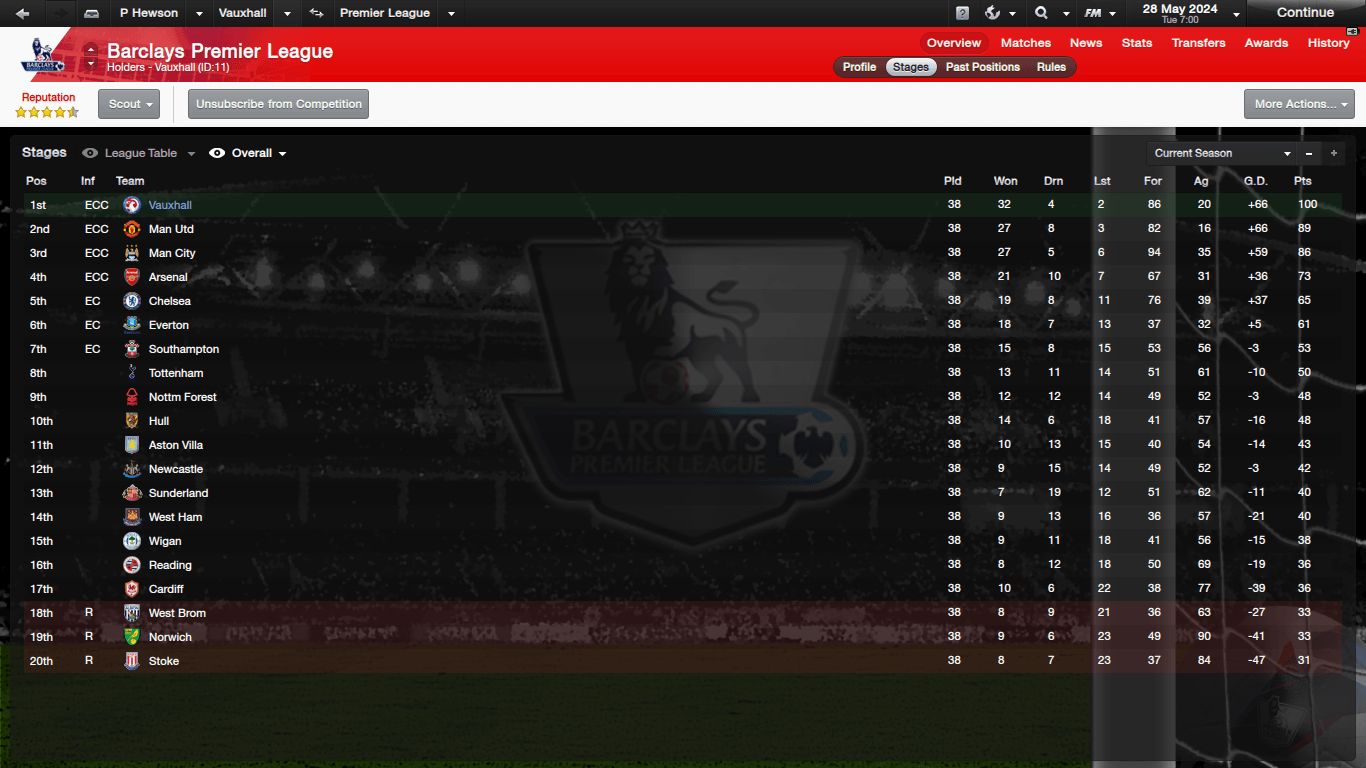 In the end, we won the league by a considerable margin of eleven points! We had broken the Premier League record for points which was 95 (set by Chelsea), by earning a total of 100 points! To go along with this, we scored 86 goals and conceded just 20, setting our Goal Difference at +66, only matched by second place Manchester United. We have improved dramatically since last season, which was seen through our final league standing. Manchester United, Manchester City and Arsenal completed the Top 4, while Chelsea, Everton and Southampton claimed the Europa League spots. At the other end of the table, West Brom, Norwich and Stoke were all relegated to the Championship.
Awards: 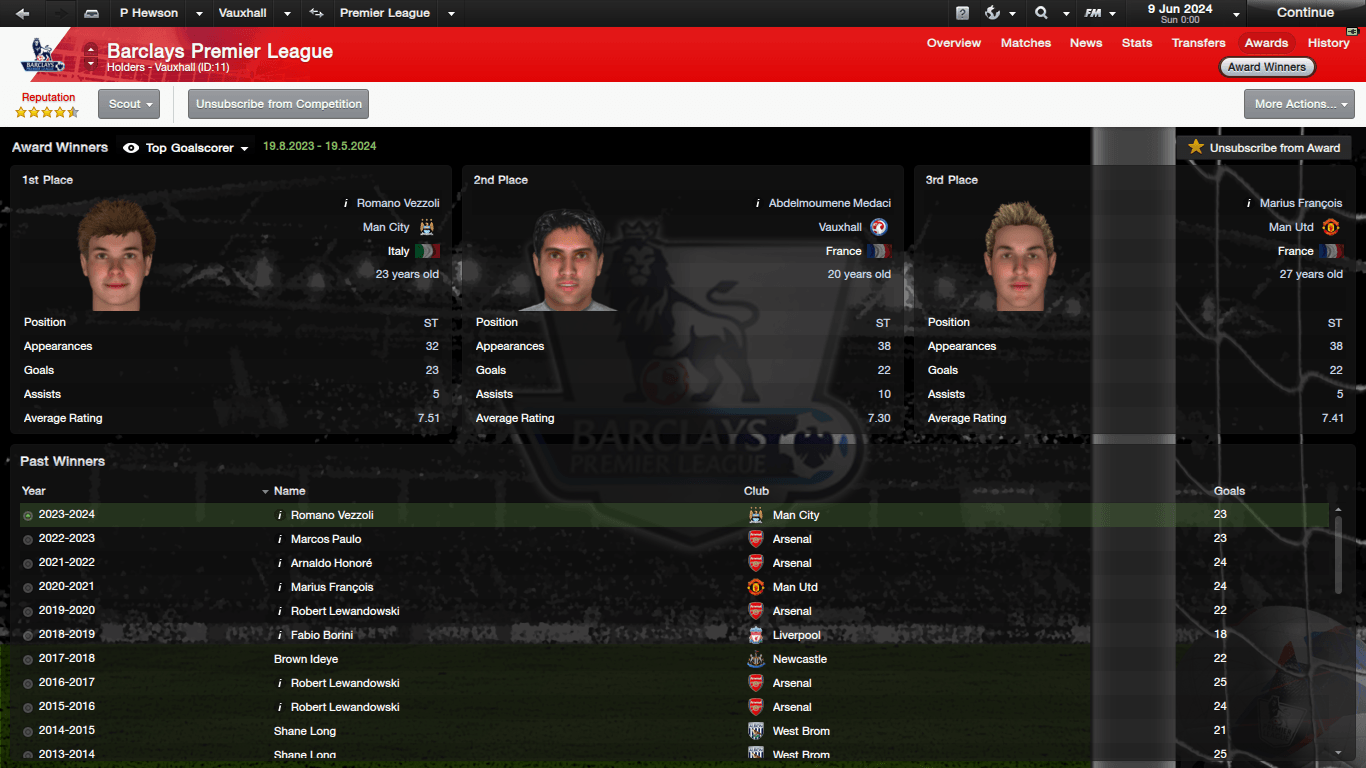 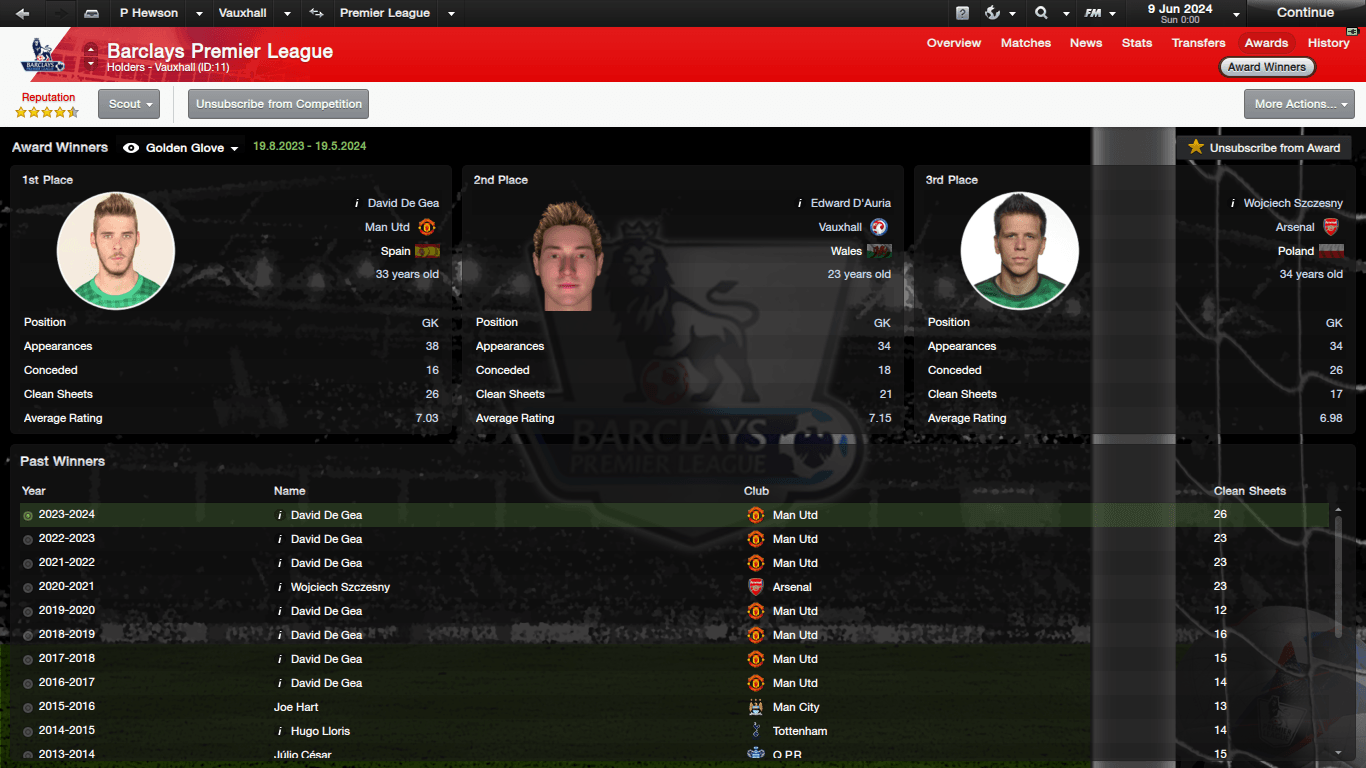 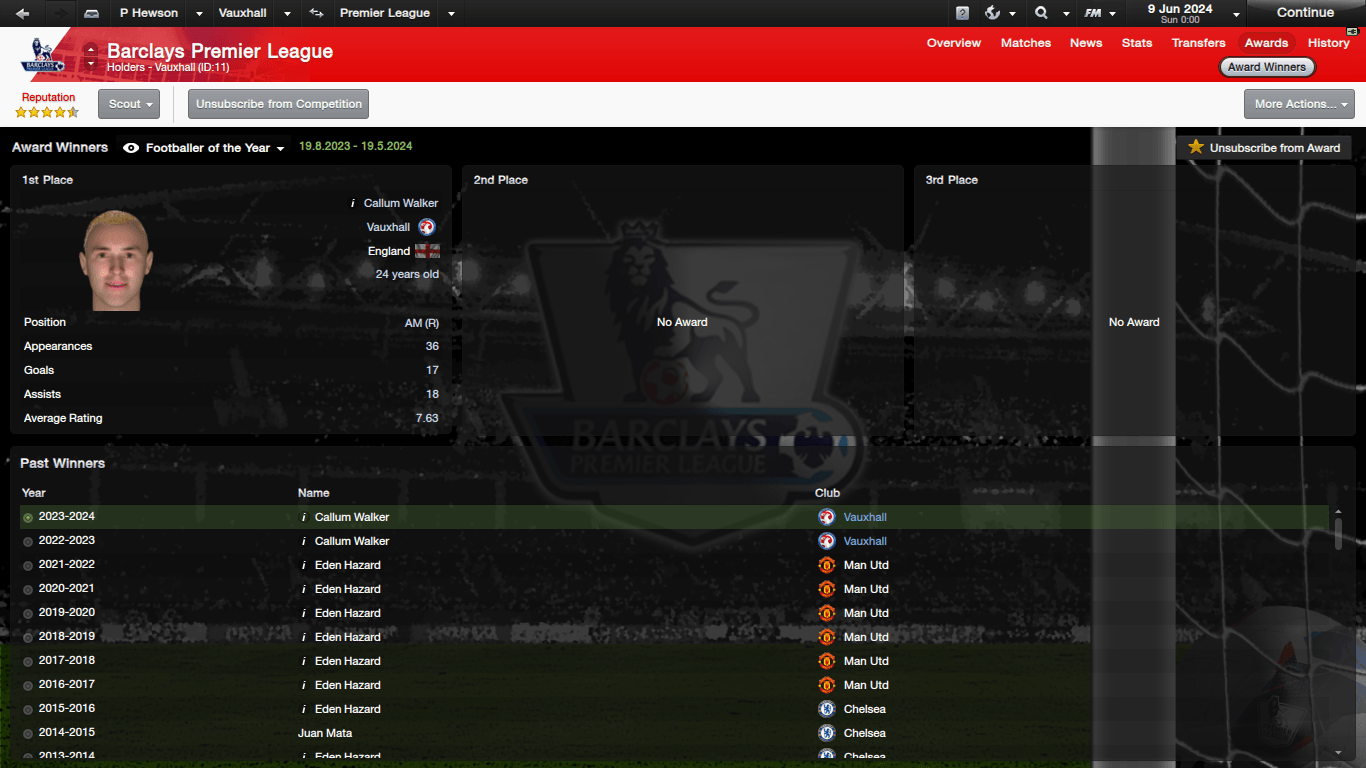 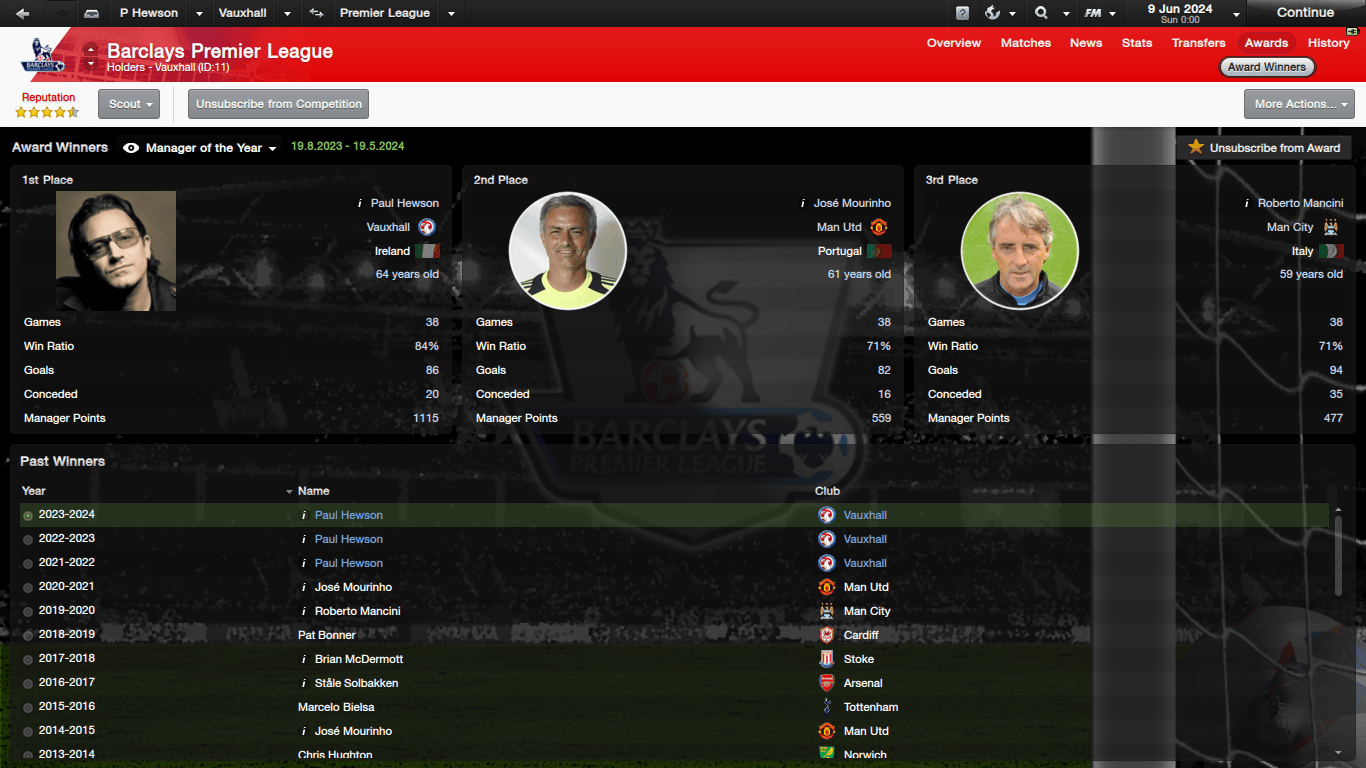 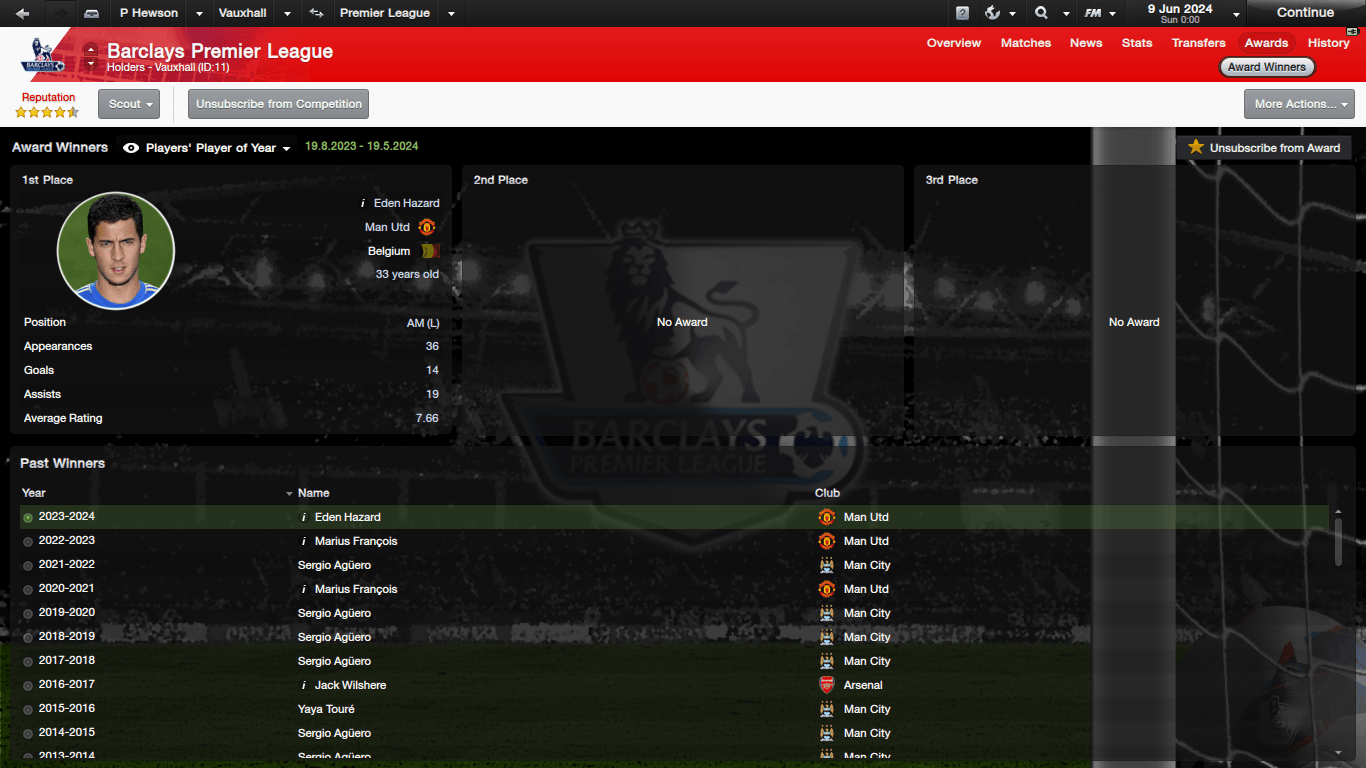 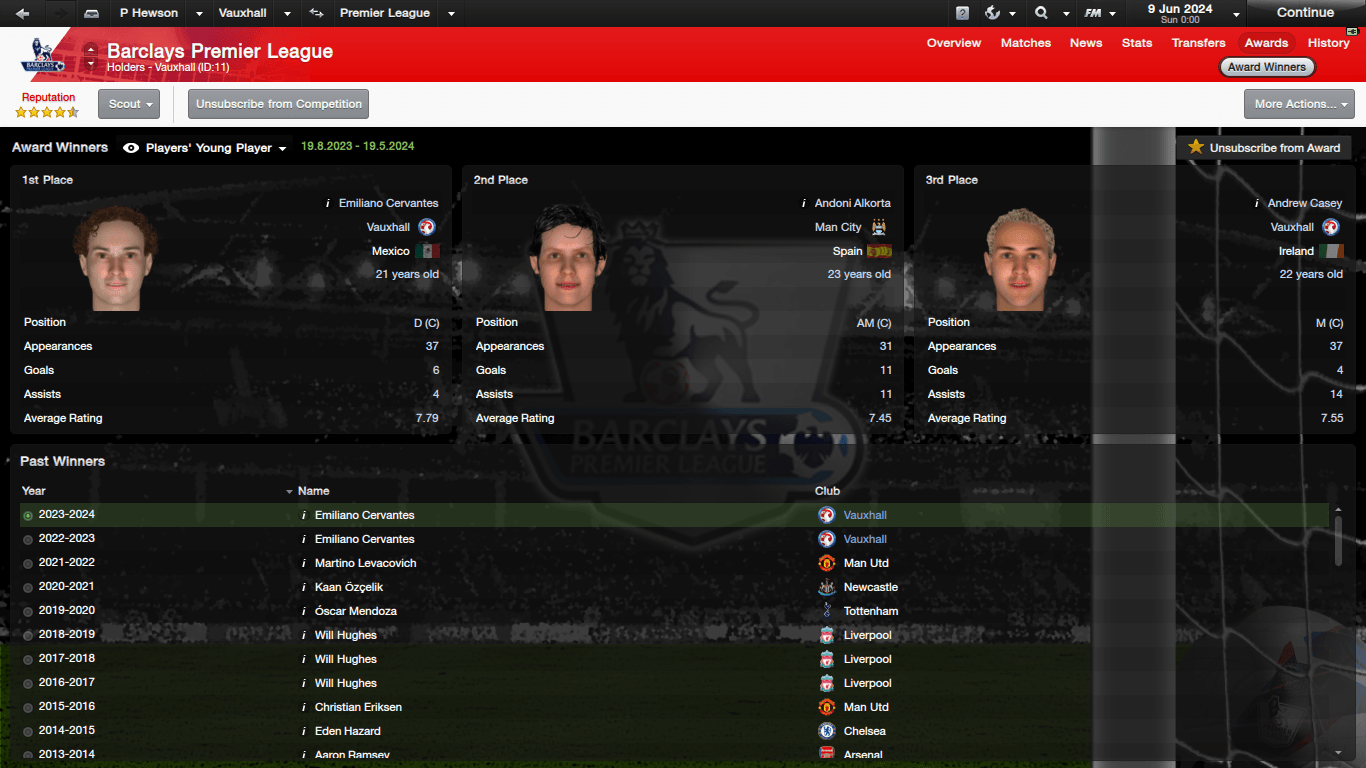 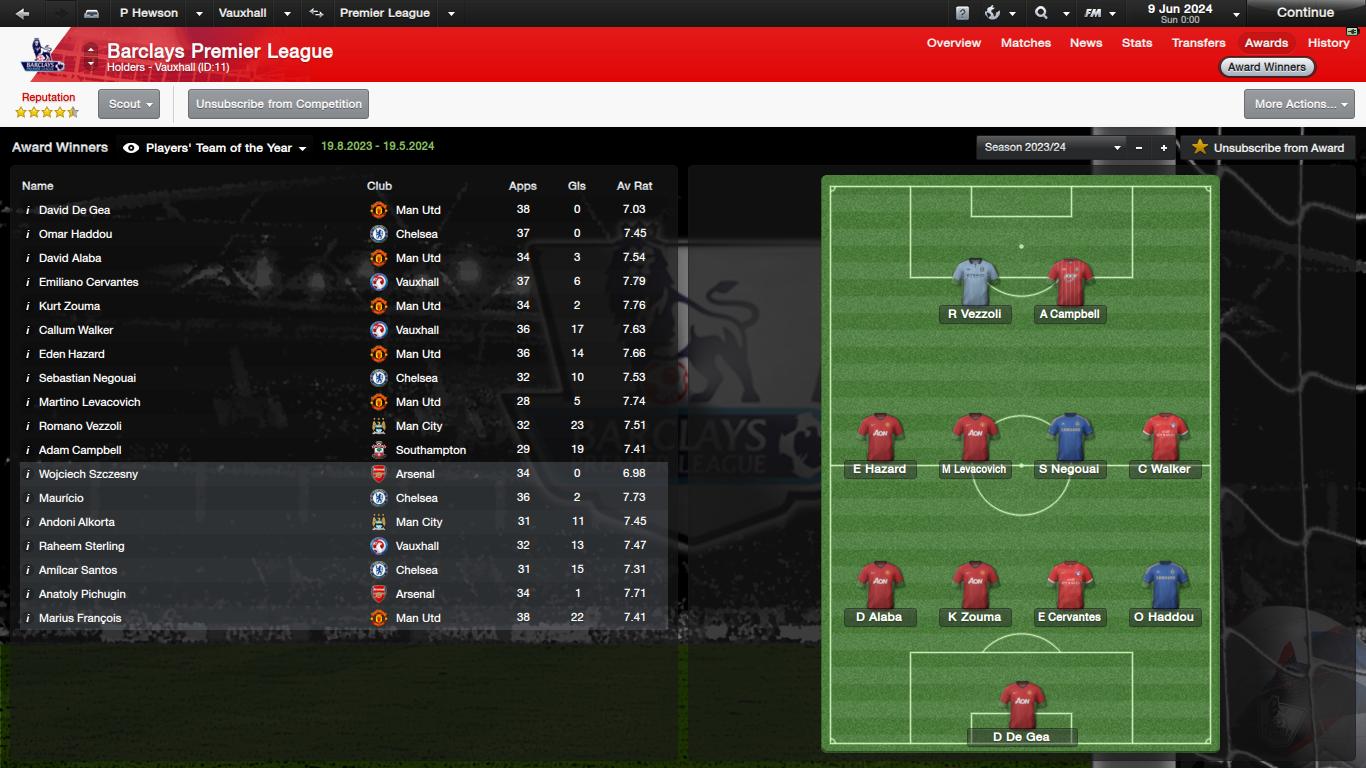 We dominated the group stages, winning all of our games against PSG, Ajax and Anji. We drew Sevilla in the Last 16. We demolished them 6-0 on aggregate, after a 5-0 win away in the first leg. We drew another Spanish team in the quarter finals, this time in the mighty FC Barcelona. After picking up a shock 2-1 win at the Nou Camp, we dispatched the Catalan giants 4-1 at thome to win the tie 6-2 on aggregate and progress to the semi finals. We faced a familiar foe in Manchester United in the semi finals, with them looking to gain revenge over us after we took their spot as the best team in the Premier League. However, they could not beat us as we won 4-1 on aggregate, seeing us go to the final. A third Spanish team stood in our way, this time Real Madrid. The final was contested in Old Trafford, and Real Madrid might have been accused of playing the better football on the night. However, the UEFA Champions League would be returning to Vauxhall Motors, courtesy of an early Abdelmoumene Medaci goal, which saw us win 1-0. This was our first ever European trophy and to win the greatest club competition on the planet is amazing. I am delighted that we have been crowned Champions of Europe, and hopefully we can win the mighty European Cup again! 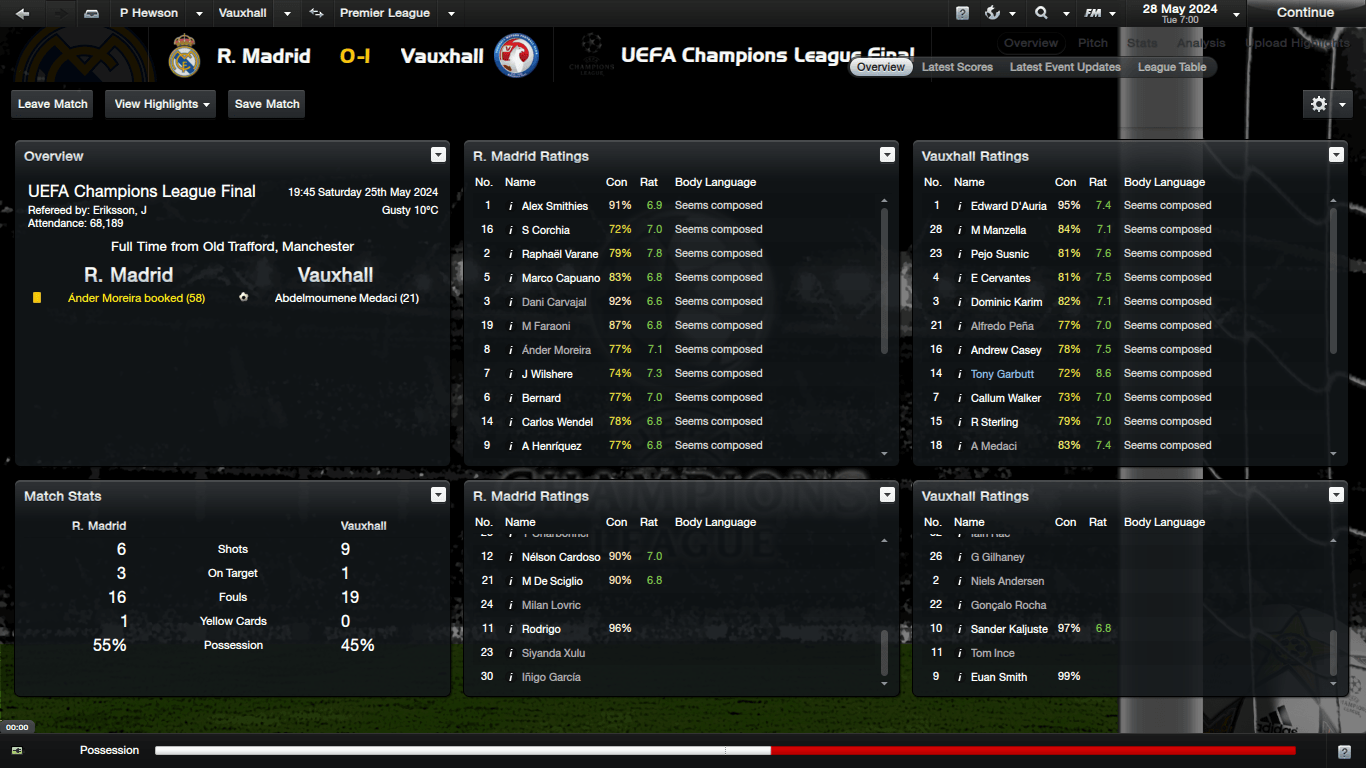 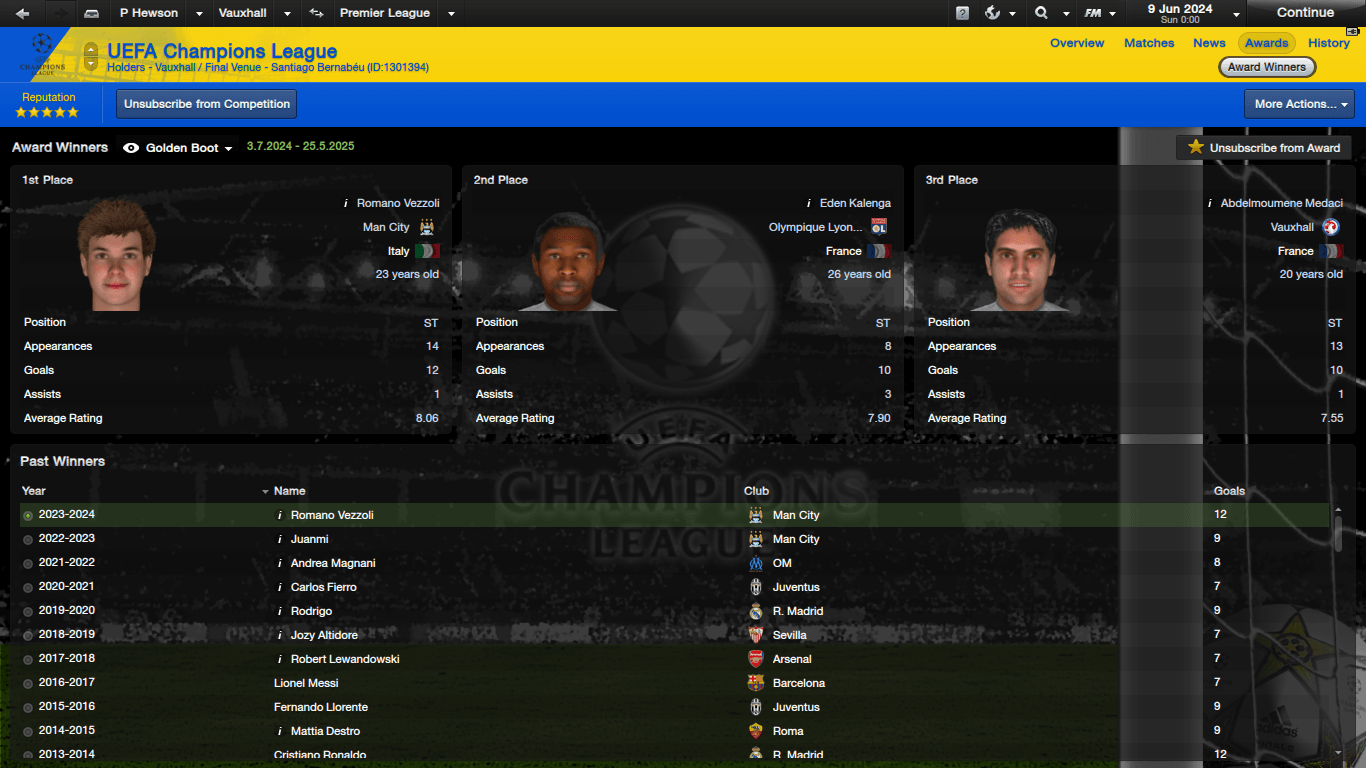 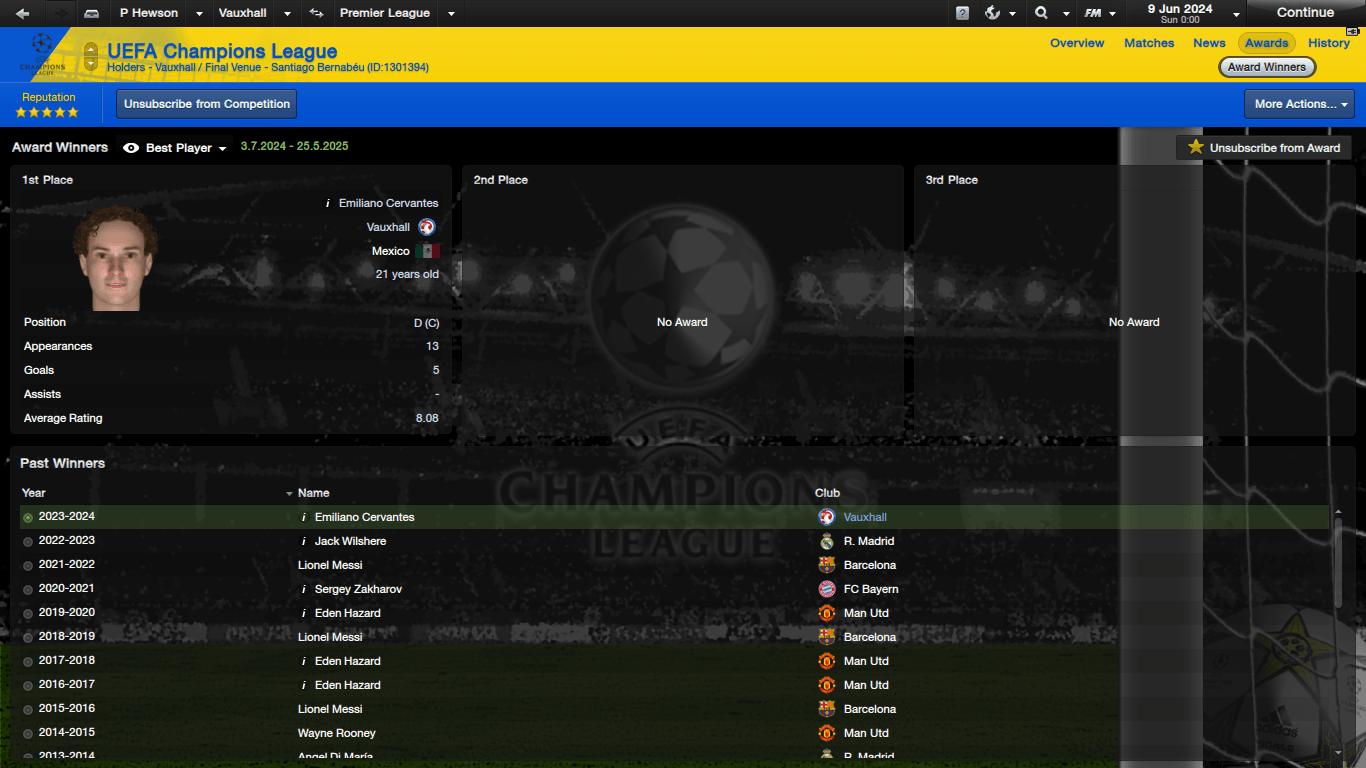 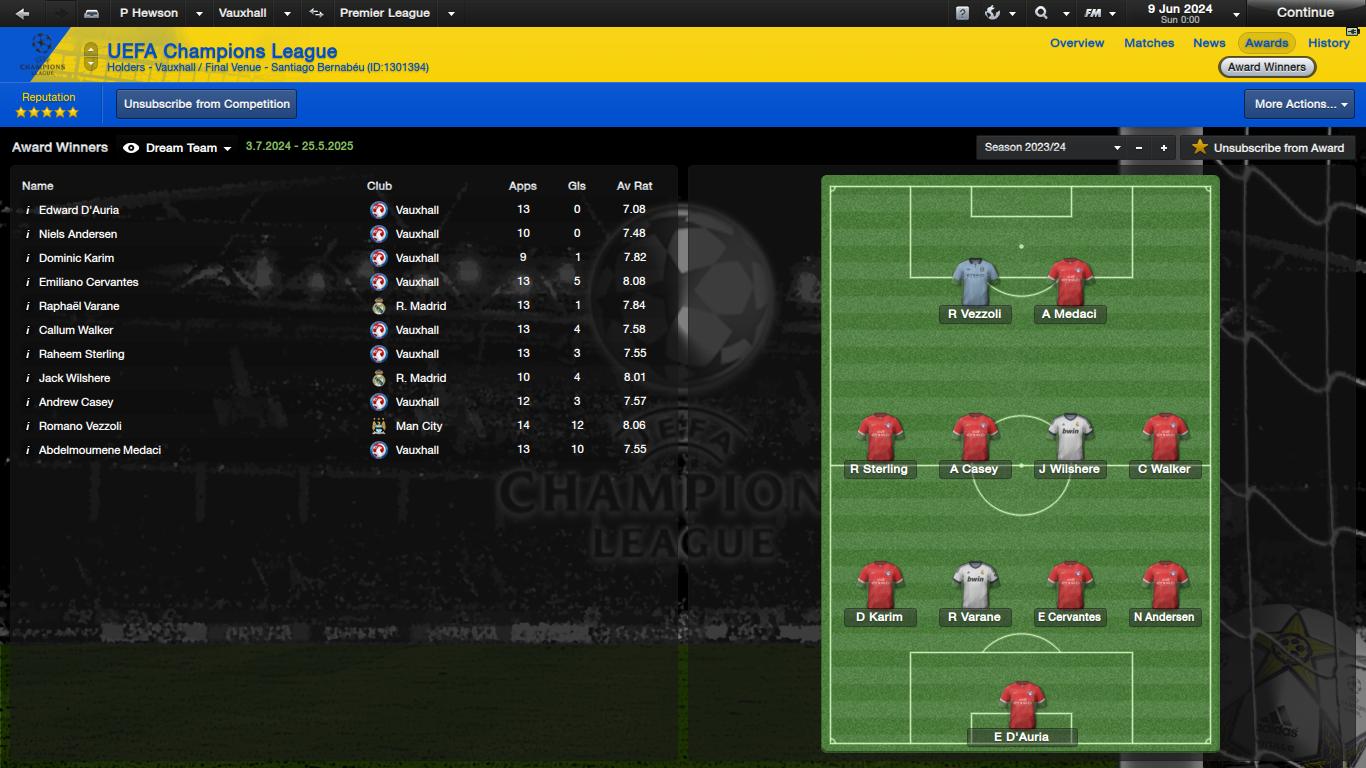 Our first opponent was Wigan, whom it took a reply to beat. We then defeated Chelsea before having to need a replay to beat Arsenal. Manchester United were our opponents in the next round, but we had no problem dispatching them. QPR were our semi-final opponents, but we demolished them to put us in the final, where we faced Everton. We deservedly went 2-1 up after Sterling's goal on the 50th minute before Everton began to throw everything they had at us, but a Cervantes-lead defence kept the Toffees out, securing us the FA Cup. I am delighted with winning this competition for the first time, especially considering our tough run of games in the tournament. Hopefully there will be plenty more memorable campaigns in the "Cup of Dreams". 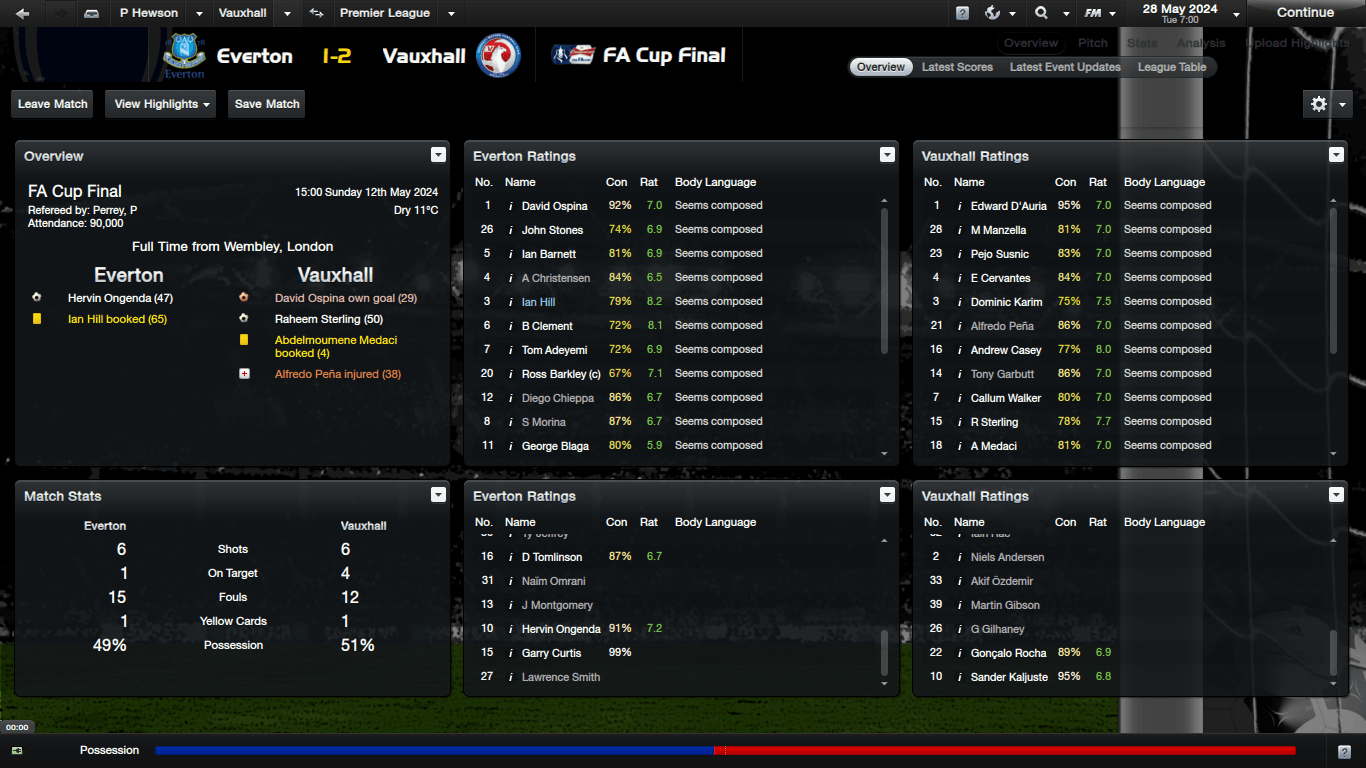 We easily demolished Everton and West Brom before losing to Sunderland on penalties in the quarter finals. I am disappointed with our performance in this competition as I felt that we could have challenged to win the trophy. Hopefully we can do better in the future. 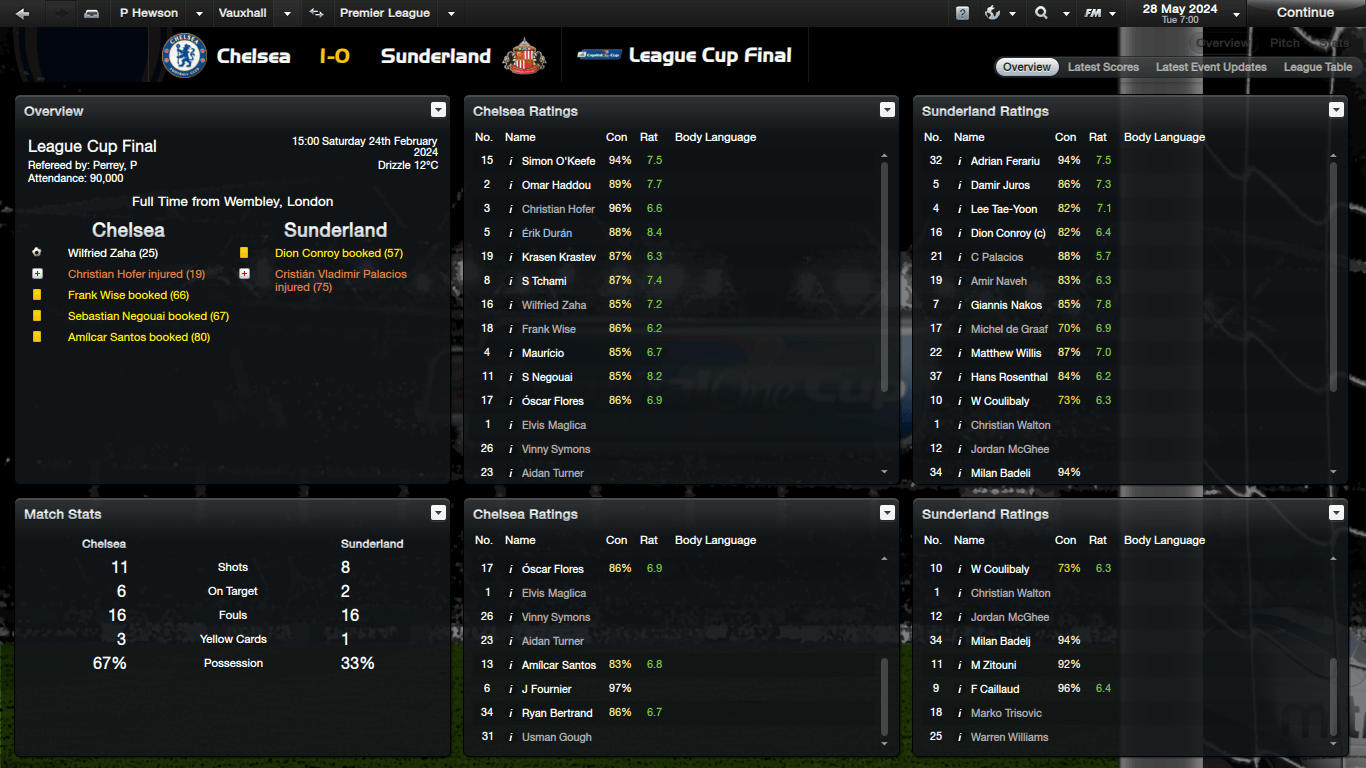 We beat Arsenal on penalties to win the Community Shield. 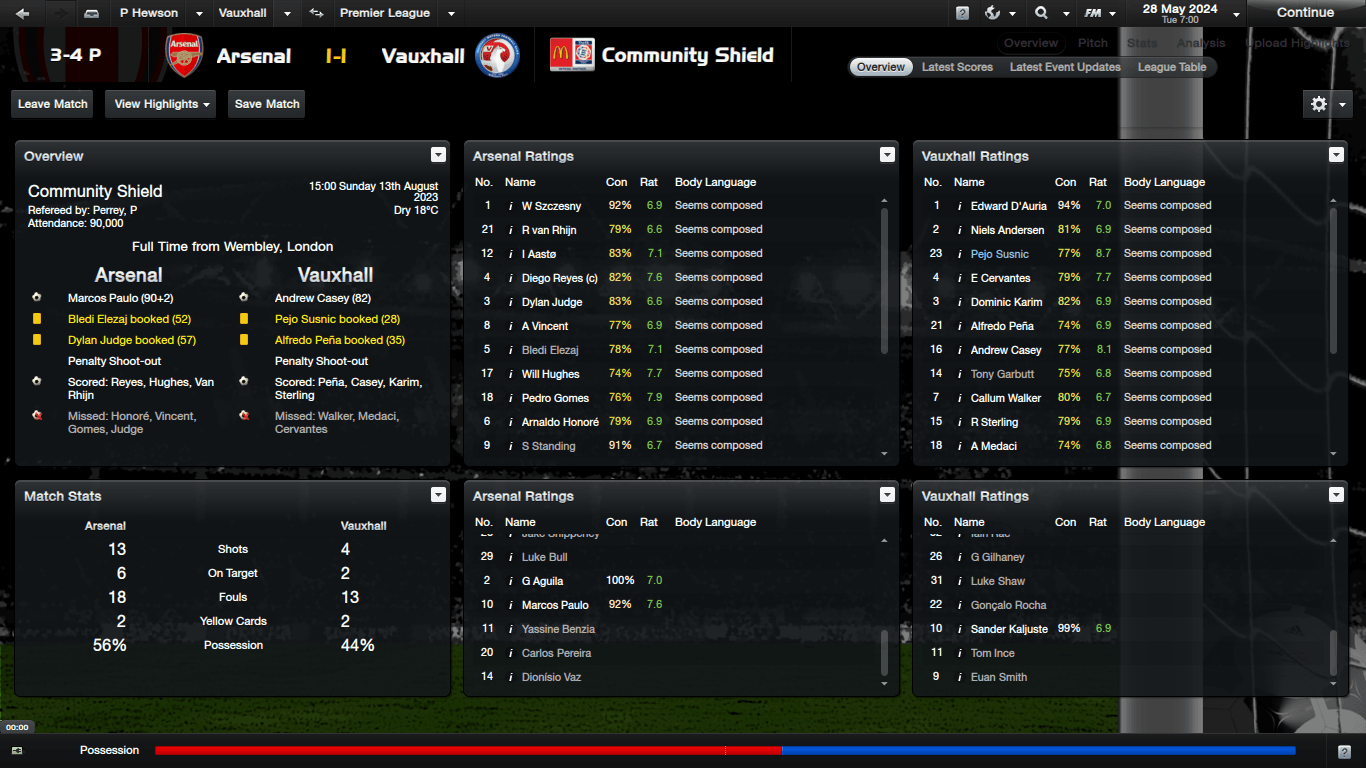 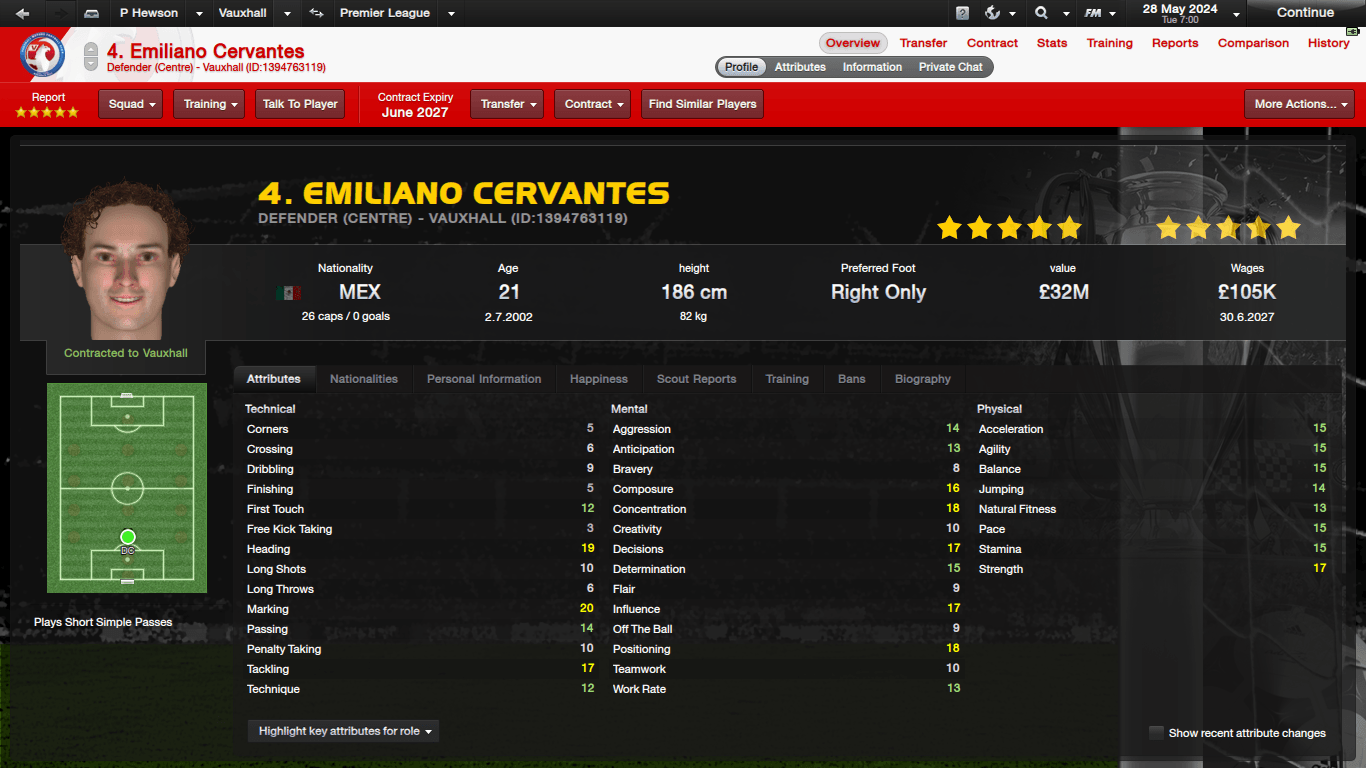 Emiliano Cervantes has earned himself the reputation of being the best defender in the world, and one of the best players in the world too. He is just on a different level to any other player, even Eden Hazard or Jack Wilshere, the best players of the recent years. He is such a reliable defender, and he has made some fantastic tacklers which has won us many, many points in the league. I think that in terms of performances, he is unmatched by any other defender in the world. He is already a cult hero, and he will be staying around for a very long time. 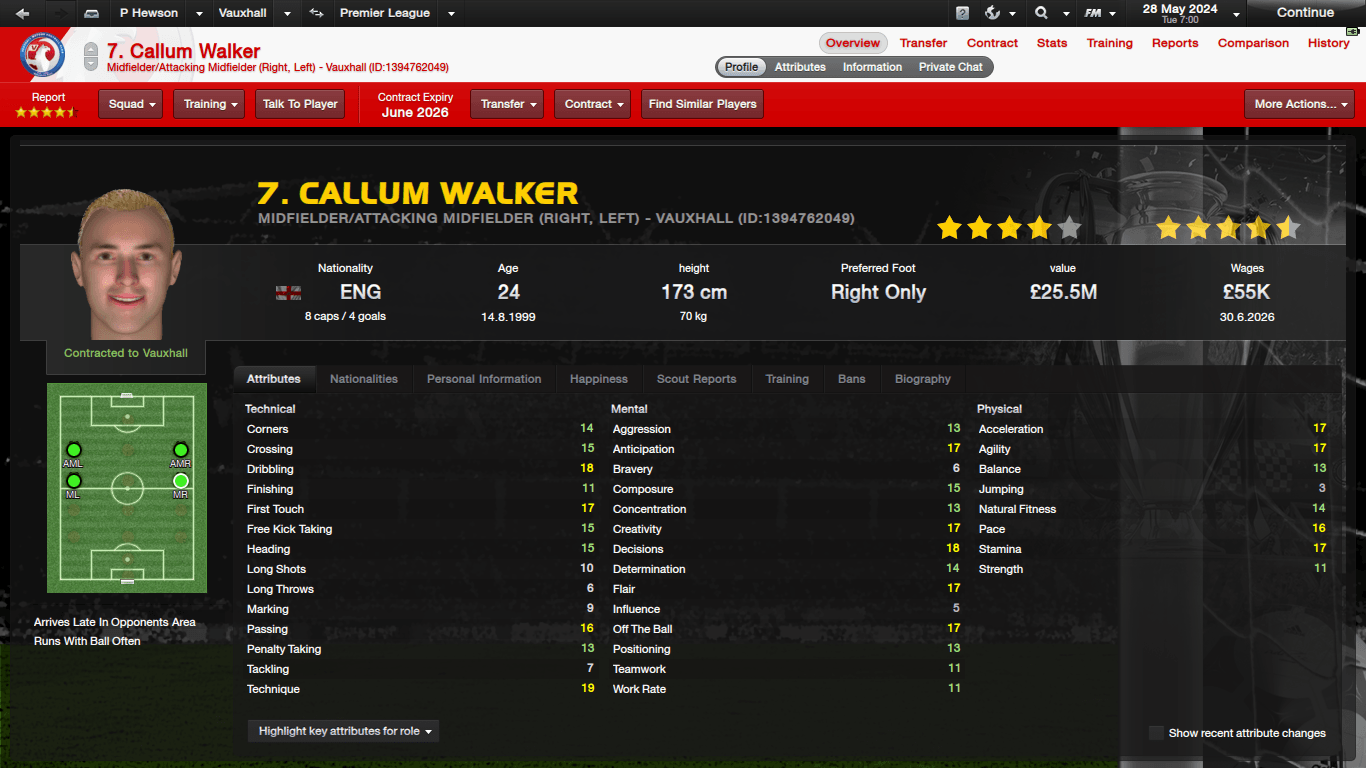 Callum Walker was possibly the most exciting player to watch in the Premier League, and he produced the magic which saw us win four trophies this season. His fantastic dribbling ability, combined with his eye for goal and his creativity, saw him score and create many goals this season. I think that he is the best English player right now, and his nation can be proud to have a talent like Walker. He is a true hero for both club and country. 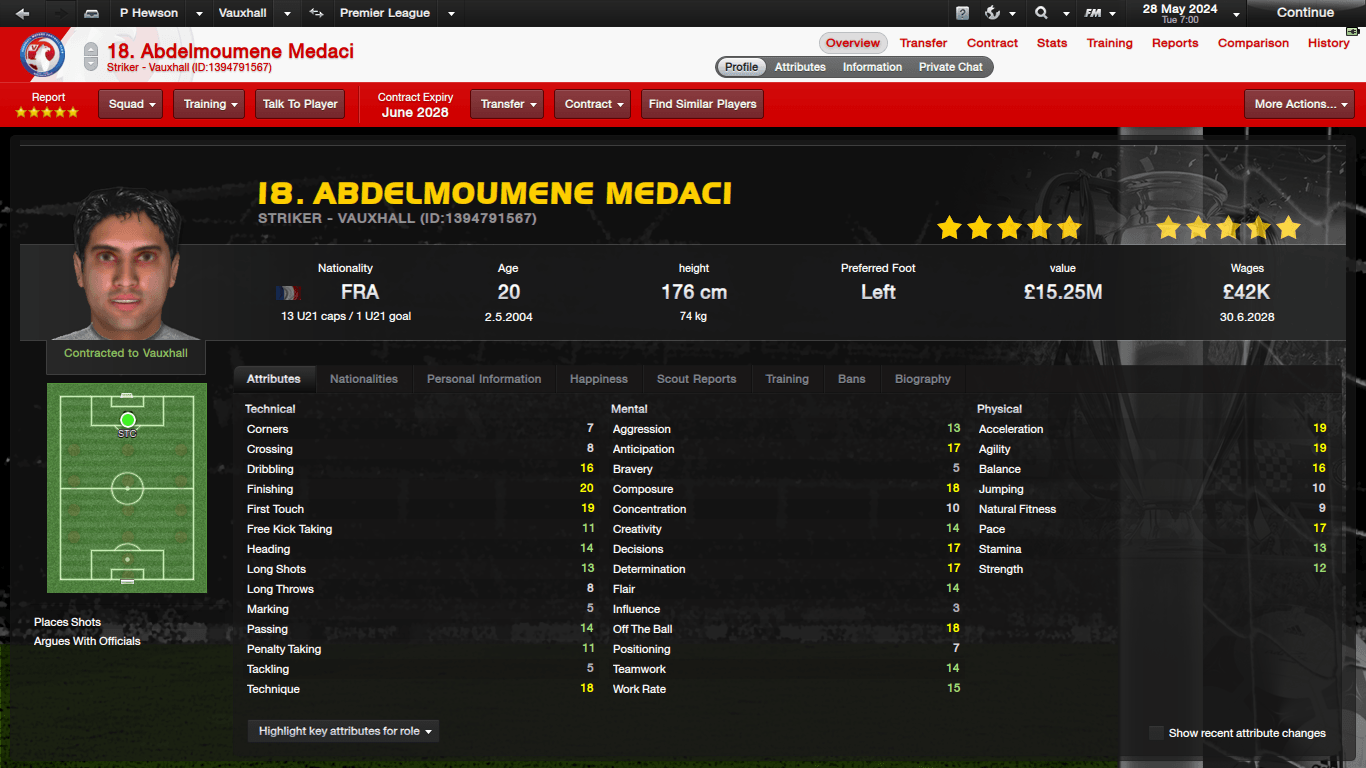 The French wonderkid striker has been a wonderful asset for us over the last couple of years and he has really come in to his own this season. He bagged over thirty goals in a campaign which saw him finish runners-up in the Premier League and Champions League Golden Boot awards. He has lit up the Premier League with his lightning pace and his precision shooting and he has just been inducted in to the French national team, where he is expected to be quite a hit. I reckon that he can become one of the greatest strikers in Premier League history, to be mentioned alongside the likes of Alan Shearer, Robbie Fowler, Thierry Henry, Didier Drogba, Wayne Rooney, etc.

A wonderful campaign where we won four trophies, including the prestigious European Cup (Champions League). This has been our best season so far and hopefully we can have many more like it! The plan for the summer transfer window is to value the current players in my senior, reserves and youth squads and decide which players to sell and which to keep, as I look to strengthen the finances of the club and remove unnecessary wages.
Login to Quote

But seriously, you realise now everyone's gonna be asking for more tits and less results, right?

k1rups
9 years
What a season! Great win in the CL final and Medaci will only score more! Great stuff
Login to Quote