The Motors are going to win the League!

The Motors are going to win the League!

Hopefully we can, but I won't be too disappointed if we don't

DeanByrne1995
9 years
Just getting back up to date on this story, Fantastic updates and some unbelievable results, Keep it up!
Login to Quote

Man UtD_777
9 years
Just went through it quickly, Incredible! just how did you do this! Wow!
Login to Quote


It took a lot of time, that's for sure


Keep up the brilliant work, I and many others will keenly track this work, well done!
Login to Quote


Our first half to the season was extremely impressive, with us reaching the latter stages of the Champions League, and leading the Premier League by a significant margin. With that in mind, we did not need to strengthen our starting eleven as such, but bring in one or two players who would help bring consistency and strengthen the squad as a whole. But first, I did make a sale and a few loans.

We were given a pretty big budget for this transfer window, but I wanted to keep most of it to spend during the summer transfer window. We were looking to sign a solid left back who would not mind being on the bench most of the time. So we did sign a left back, for a fee of £8M. Who did we sign? Here he is: 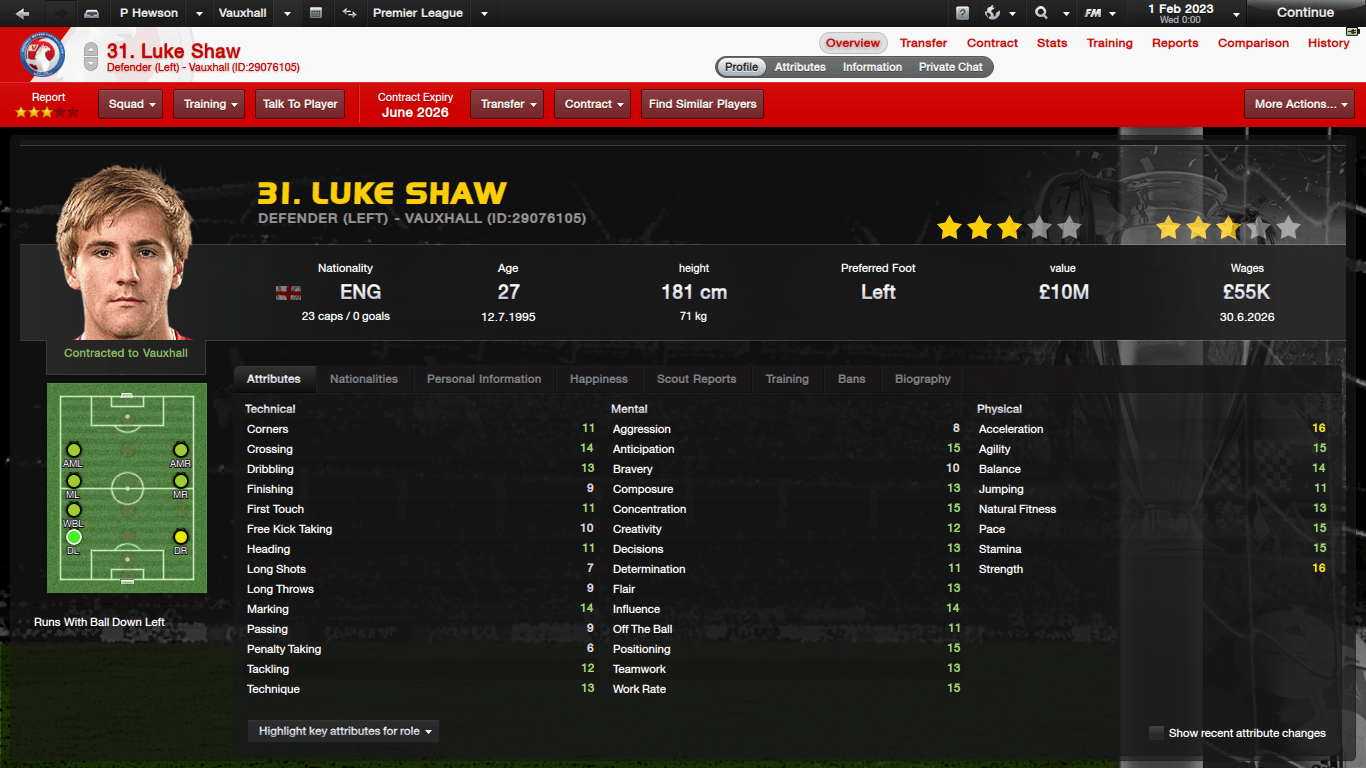 Once one of England's hottest defensive prospects, Luke Shaw's career did take a sudden plummet when he signed for Reading in 2016. After two seasons at the mid-table Premiership club, then Champions League runners-up Newcastle came knocking and Shaw made the move to one of England's best teams. After four years of fantastic service for a top team, he was exchanged to Liverpool at the start of this season for a promising midfielder. With Liverpool struggling to avoid relegation, it was an ideal time for me to swoop in and unnerve him. He took the bait and Liverpool's £16M valuation of the player quickly dropped to £8M. He is a very solid full back with great all-round stats. He is also a very good attacking player, and is great physically. I couldn't sign a more consistent player than him, and he will help bring stability to us, a club in major transition. Hopefully his experience as a top-club player will help us over the years.
Value for money:

Nic
9 years
Reading ruined one of my favorite players of FM13! I hope he'll rise under your leadership! 8M what a steal, despite his stats.

Shaw's experience with a top club will help tremendously and you just can't put a price on such a unique opportunity to help mentor younger players.

@Bourani44, hopefully he will be able to revive his career


Hey guys, so here is the second half of our 2022/2023 season. We were topping the league by the end of December, and we had also topped our Champions League group, which contained Barcelona and CSKA Moscow. With our very young team developing well and performing even better, we were beginning to look like an elite team. The signing of Luke Shaw as a back-up player showed our intent on becoming the best team in the world. Hopefully the nerves wouldn't get to us and we could finish the season with a trophy.

We started 2023 with six consecutive wins, before slumping to a draw against Manchester City. A 5-1 thumping against Everton away set us on our way to title success, before losing away to Arsenal. We bounced straight back with three wins in a row, before Chelsea gave us another set back at their place. With four games to go, we won three and drew one. I was pleased with our overall run of form since January. In 18 games, our record was 14-2-2. We scored 36 goals, and conceded just 8. I am delighted with how well we played and that we really showed our dominance at times. Let's see how it affected the league table. 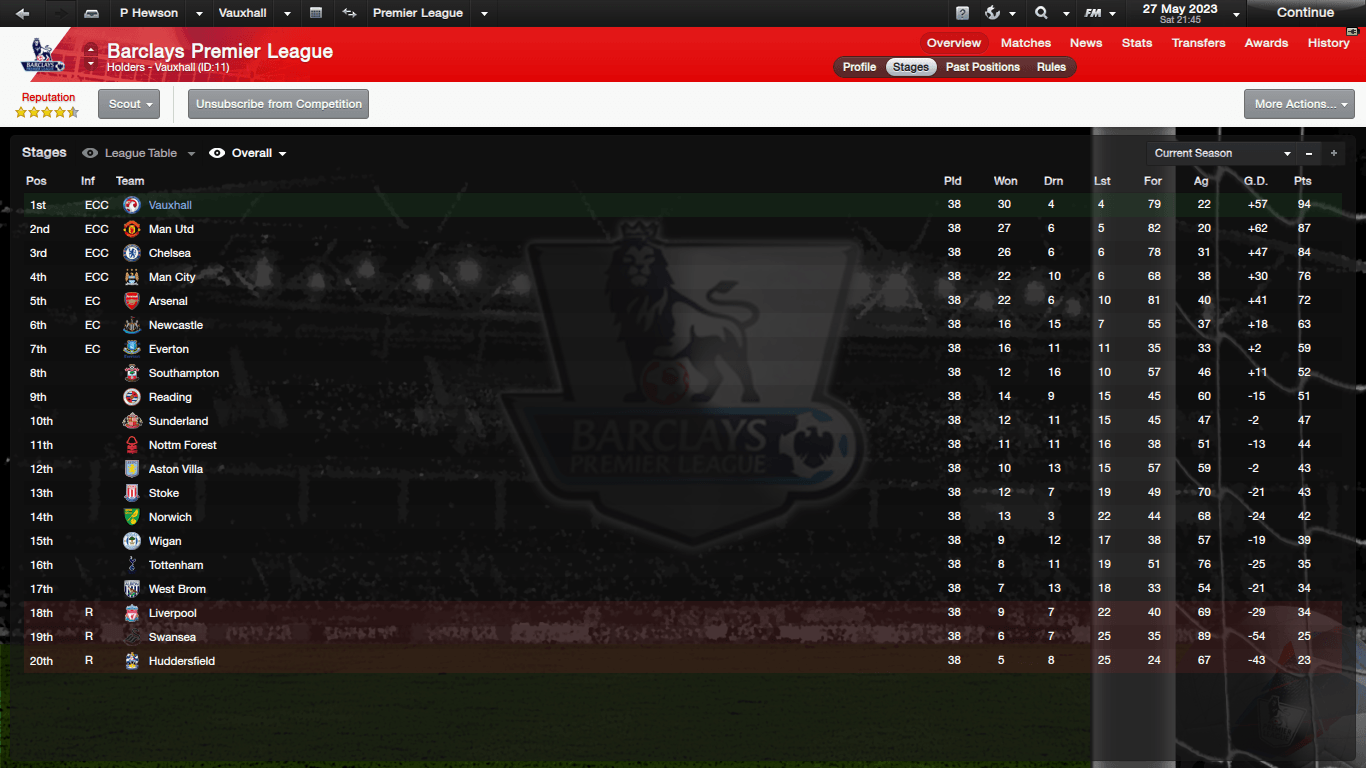 We were crowned champions with 94 points! An amazing tally and an amazing accomplishment for us. Man Utd were 2nd, 7 points away from us. Chelsea and Man City completed the Top 4, while Arsenal, Newcastle and Everton claimed the three Europa League places. On a more surprising note, Liverpool were relegated from the league, following a shocking management term from Roberto Martinez. Spurs were not so far off relegation either, finishing in 16th. I guess the world of football really has changed! Looking at our Goal Difference, we did superb. Only Man Utd beat us on that front. Hopefully we can improve on this for next season. Also, Callum Walker won Player of the Year, Emiliano Cervantes won PFA Young Player of the Year, both of them featured in the PFA Team of the Year, and I won Manager of the Year too! 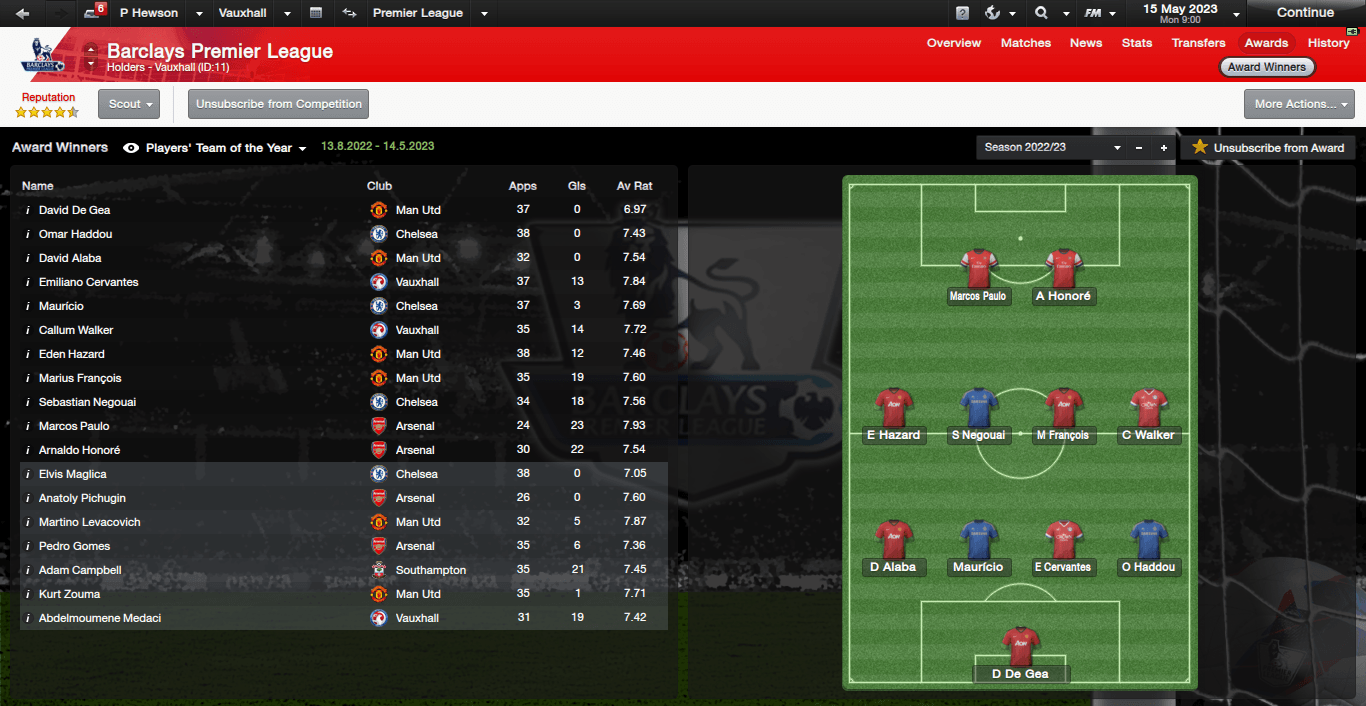 So we did very well to top our group, which was a very tough one, but we were knocked out in the Last 16. We faced Italian giants Juventus, who were just too strong for us. They were on a different level of football entirely, and showed that even one of England's best teams didn't stand a chance on the European stage. Maybe next season will see us get further in the Champions League. 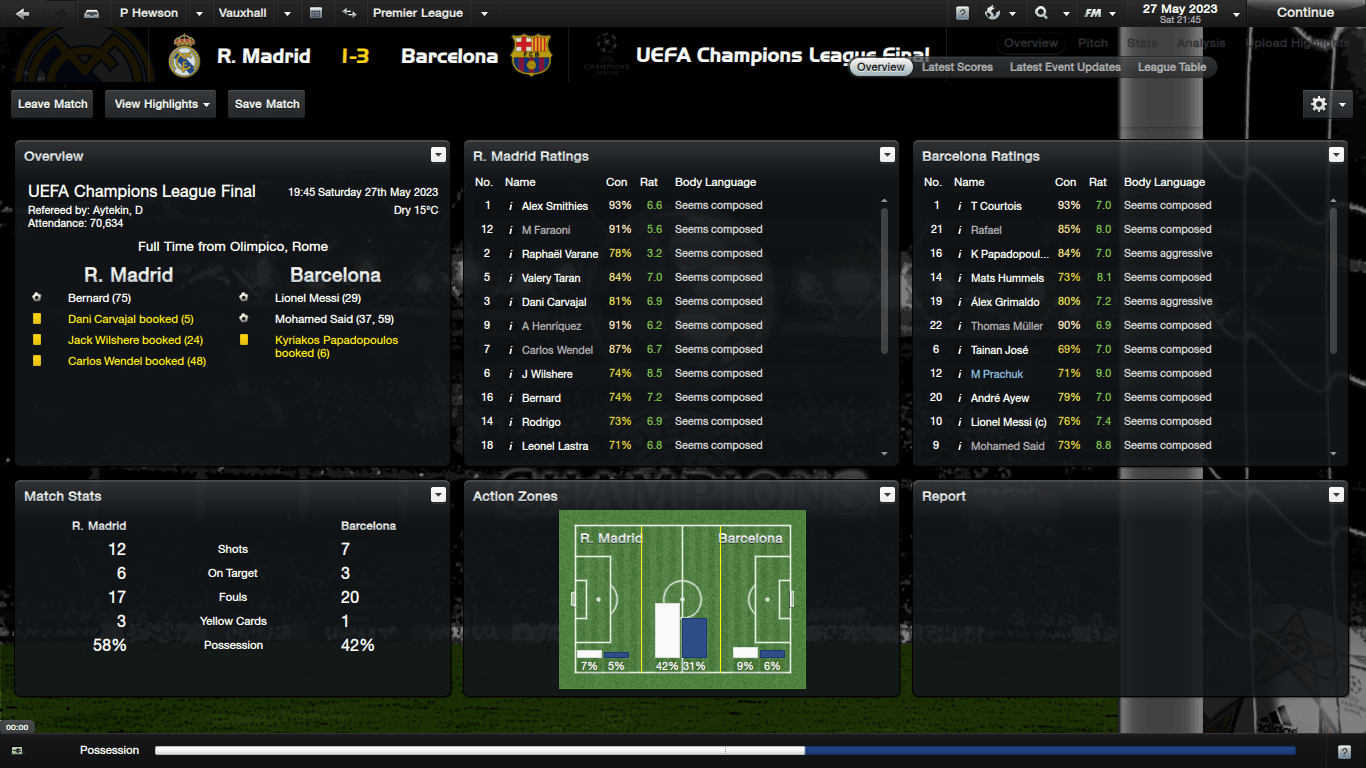 We beat Reading and Spurs in our first two FA Cup rounds, before facing Man City away in the 5th round. They won 2-1, and deservedly too. They out-played us during most of the game and won the game fair-and-square. I am slightly disappointed with our performance in the FA Cup, but we were battling for the league title, which we won so I'm not too worried. 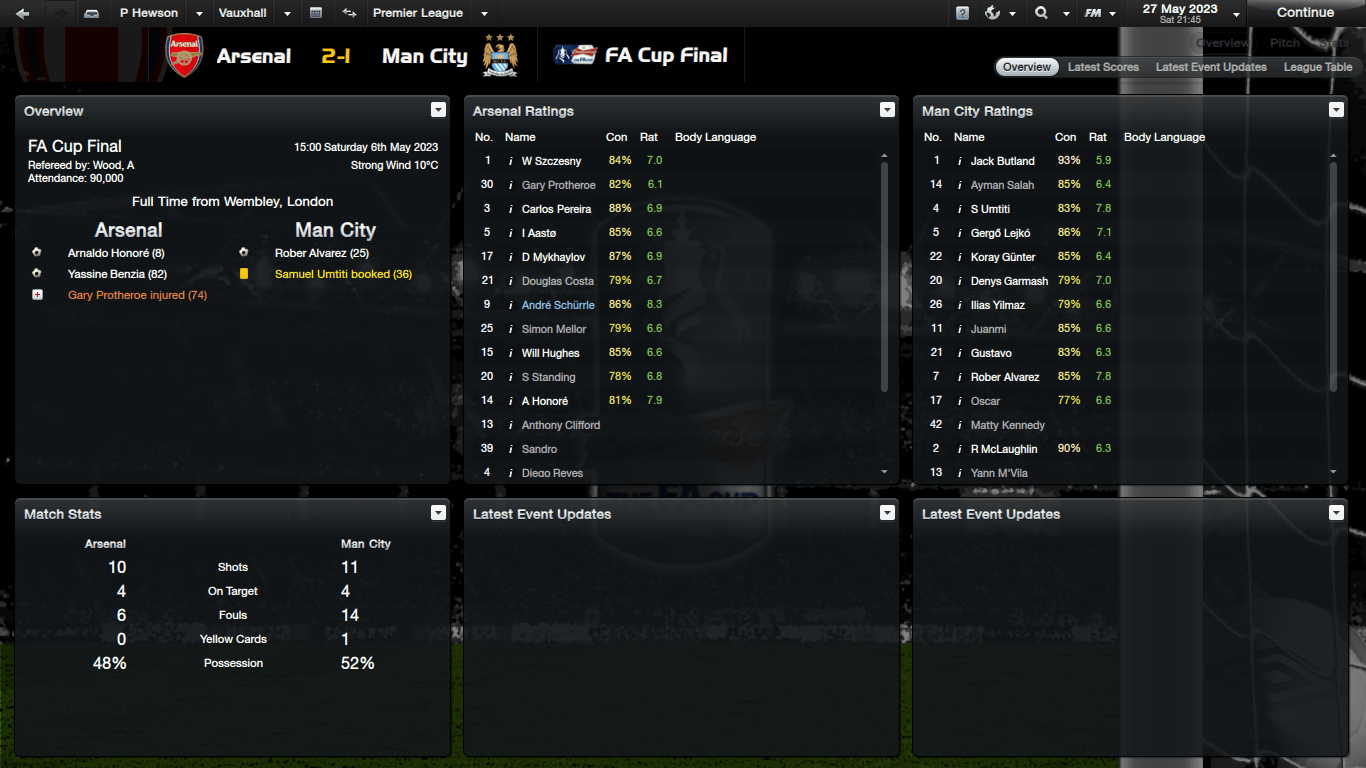 We struggled to penalty wins against weaker teams in Burnley and West Brom, before Man City put us to the sword. I'm not going to lie, I wasn't too concerned with this competition, but hopefully we can win it in the future. 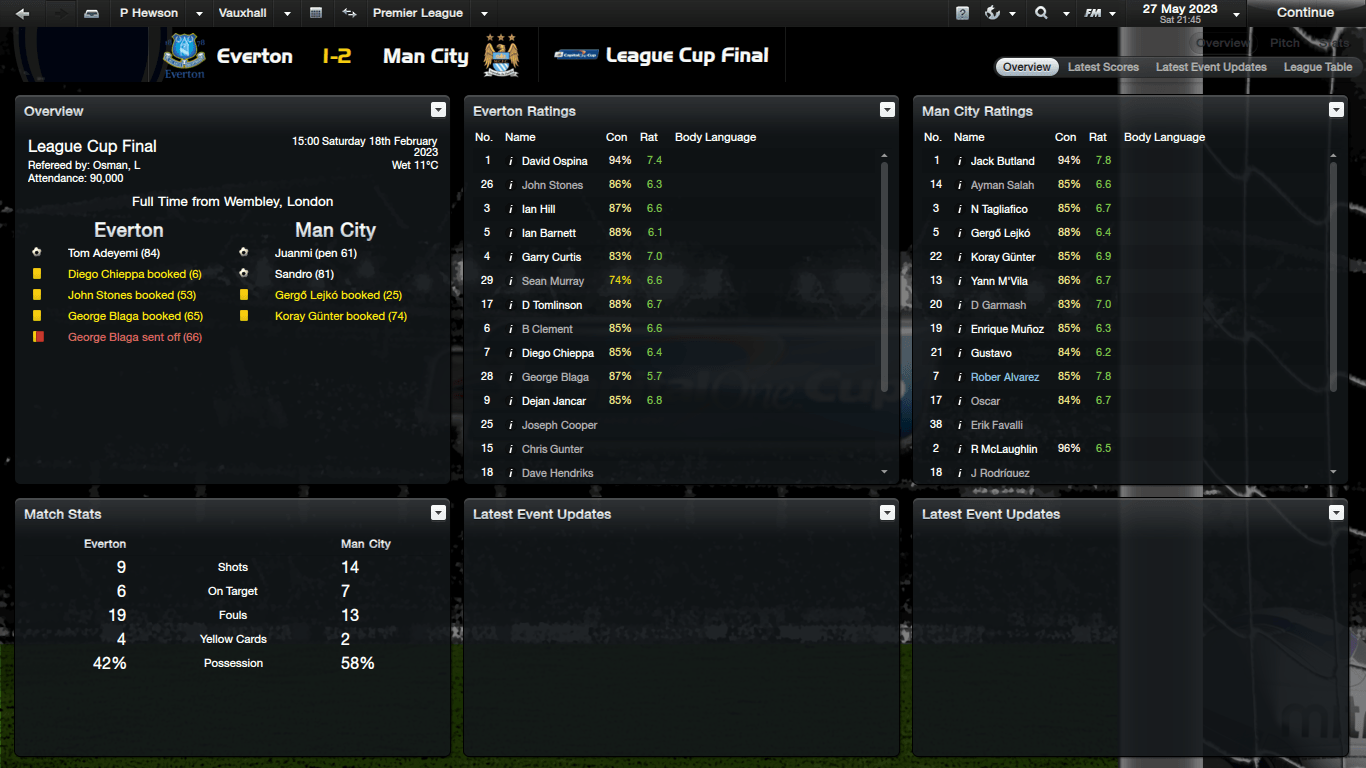 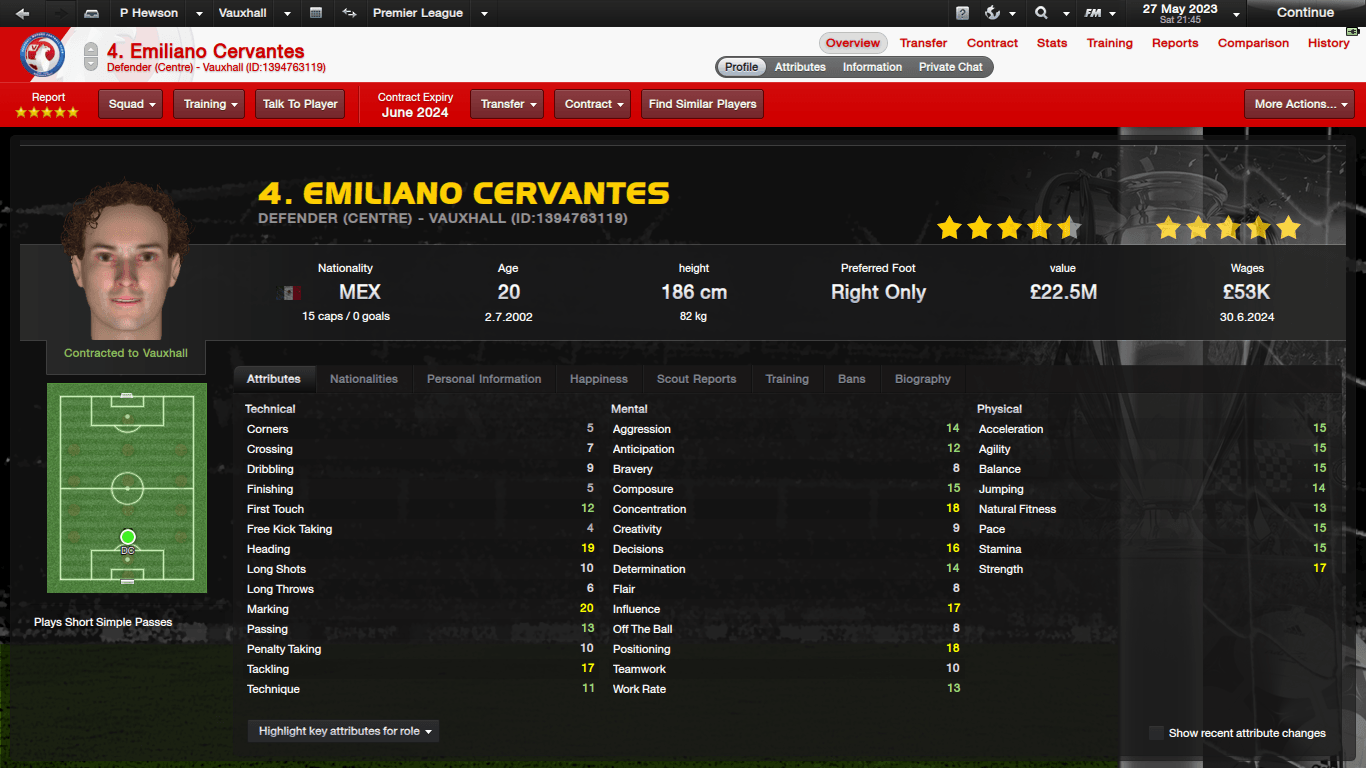 Emiliano Cervantes has been just outstanding this season. Easily the best defender in the league, and one of the best in the world, and still only 20 yrs old. He has just been so solid in defence, being able to defend absolutely anything that comes his way. He is fast, strong, intelligent, and tough. He has also brought goalscoring to his game, scoring 17 goals this season in all competition, 13 in the league. This is extremely impressive for any player, let alone a defender! He has been our best player since joining, and continues that tradition. 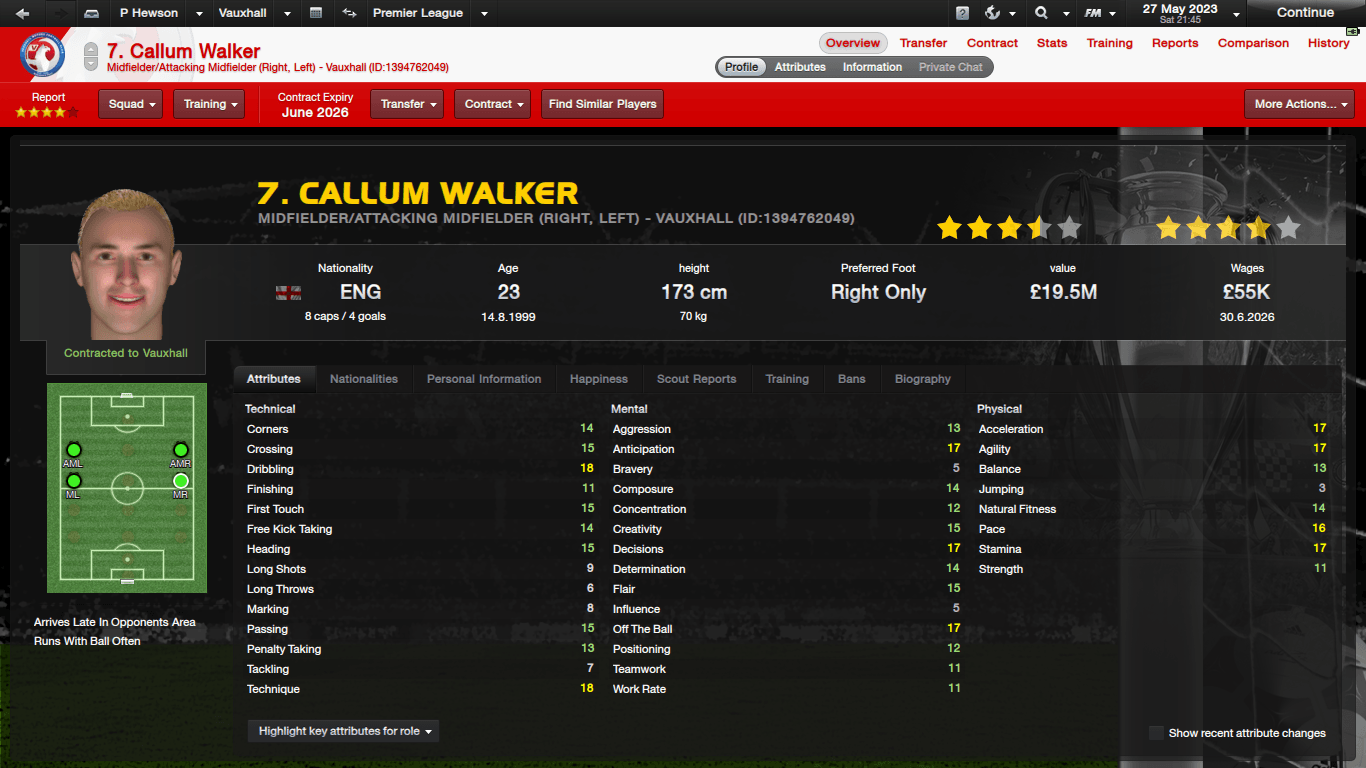 Callum Walker has just been absolutely electrifying for us this season. His insane dribbling ability, combined with his technique, creativity, flair and off-the-ball movement, makes him a lethal winger, with his pace and acceleration being nice bonuses. He has been such a master going forward, and deserved his Player of the Year award. His goalscoring and creation ability was on full display for everybody, as he scored or assisted in 50 goals this season, a stat which cannot be ignored whatsoever. He has just been unstoppable! 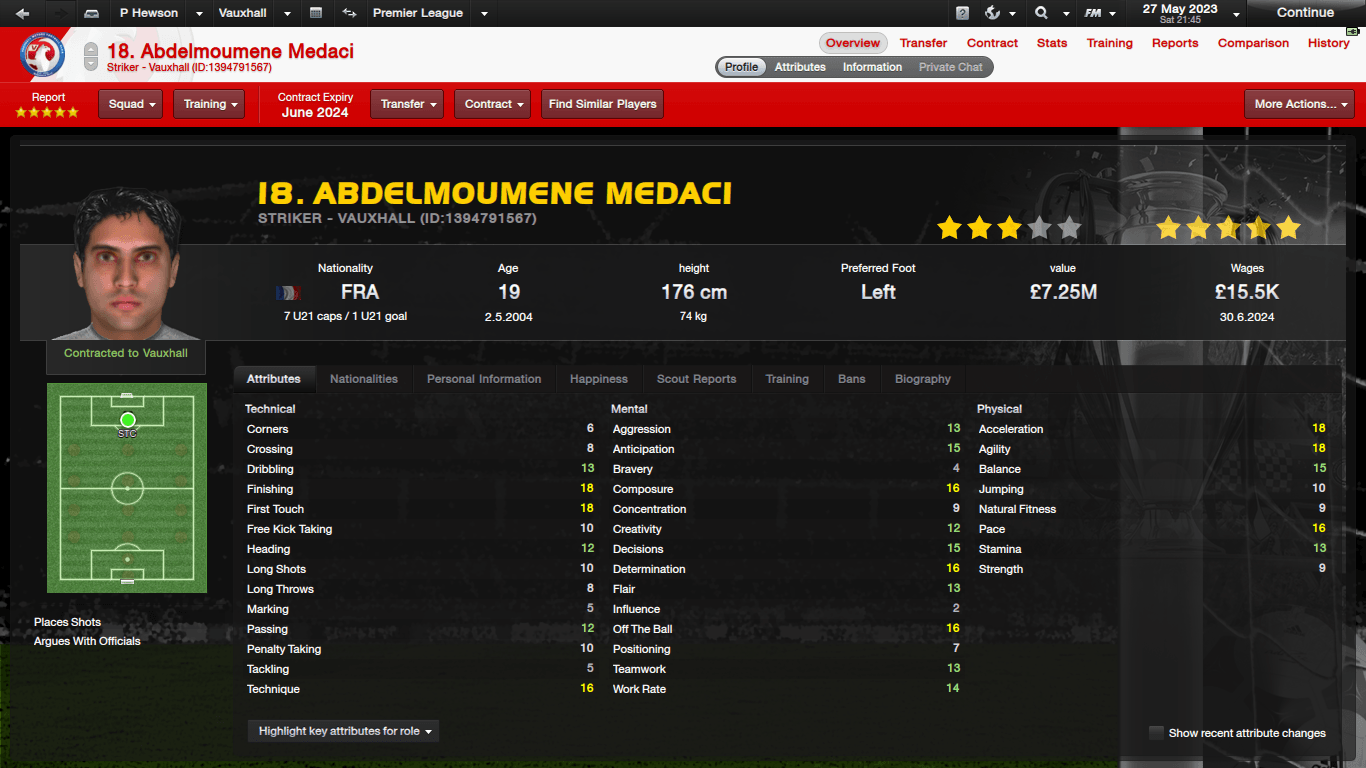 Abdelmoumene Medaci, our wonderkid striker who just turned 19, was a revelation this season. Euan Smith was injured in pre-season and missed the first couple of months this season, which meant that Medaci had to step up and play up front. He did so incredibly well, scoring goals almost for fun. Despite being a bit limited in terms of what he brings to the pitch, he does his duty by scoring plenty of goals, scoring 25 in all competitions this season. He still has another 10+ years of playing at a top level, and I can only predict bucket-loads of goals to come from him.

So another season has passed, and this time we were crowned Champions of England! This was our best season yet, and I hope that you all enjoyed it. The summer transfer window will be interesting, as I will be looking to offload more scrap players, and bring in one or two top players to help strengthen our team. Thank you all for reading and supporting me, I hope that you are all thoroughly enjoying this.

wellsy1498
9 years
Wow well done on winning the league. It is such a great achievement. I think you know we are all still enjoying this and we cant wait for the transfers

Nathaniel
9 years
Fantastic! I said it! I said after the first half of the season that you would do it and you haven't disappointed! Superb half season!

Superb update on a fantastic story
1
Login to Quote