I am going to attempt to write a report of the results in each competition this season. Also, if you have any suggestions on how I can improve this story, please comment below 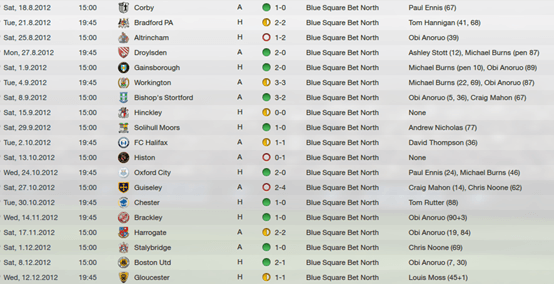 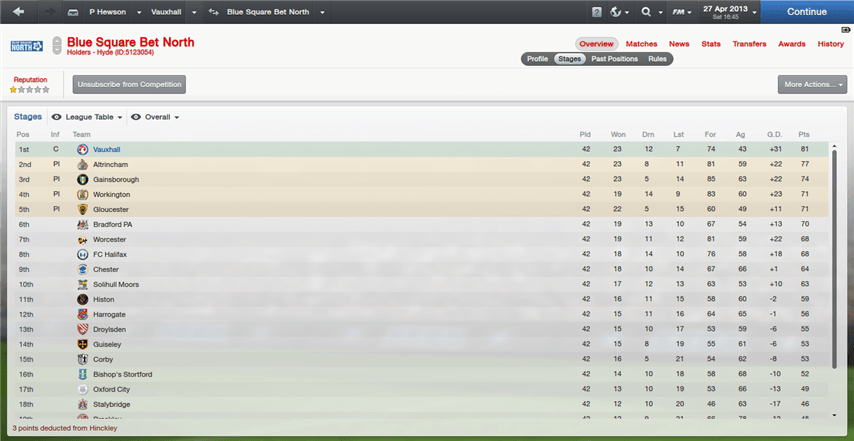 Altrincham won the play-offs after beating Gainsborough 5-0 in the final.

I was also voted manager of the season: 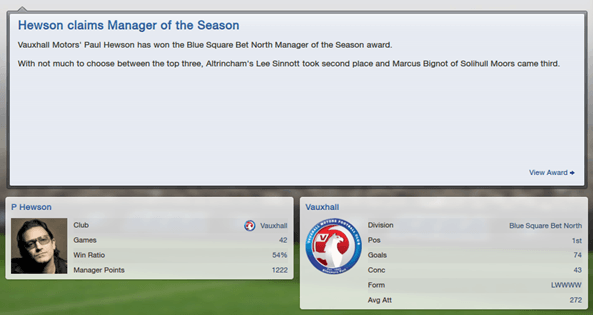 At the start of the season, we were expected to finish around the relegation zone. We proved our critics wrong straight away with an opening day and from there, the flood gates opened. Our defensive record, combined with Obi Anoruo's goalscoring exploits, lead to some very high quality football. I have found that my 4-2-3-1 tactic worked excellently as my defence always had protection in my two DMs. Next season will be much more different in a higher division. Hopefully we can play well enough to not get relegated.


I did not expect a single win in this competition but we managed to get much further than we were expected to. This is how our run in the FA Cup looked like:

NPower League One side Stevenage were the team to knock us out emphatically.

Here is how the Final went: 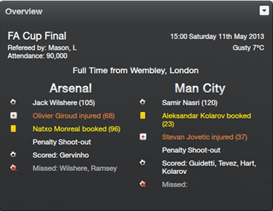 Hopefully we can do as well as we did last season.


I was not too concerned about this cometition but it is now one which I would love to win. Here is how our run in the competition looked like:

We had some great games, including a fantastic last minute win against Harrogate. Macclesfield showed their class to put us out of the copetition.

Here is how the final went: 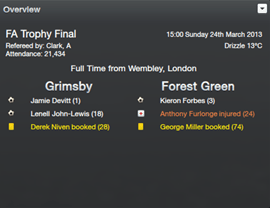 I am dreaming of the day that we can win this trophy.

My next update will be a press-conference with Paul Hewson 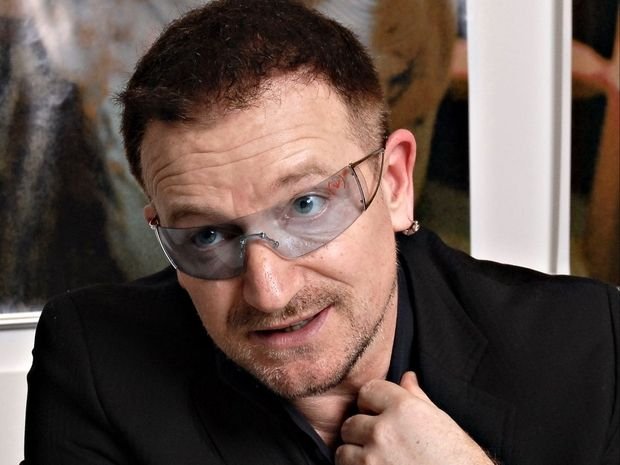 "I have told you before that the spirit of the squad is second to none and the way we won our last four games proved that. It was an amazing way to end the season, lifting the league trophy in front of our own supporters. I am blessed to be able to have won a trophy in my first ever season as a manager. I can honestly say that it is a dream come true for me!

I have signed a one year extension with Vauxhall Motors. If I can fulfill our (the staff's) expectations, the board have promised to give me a longer contract. I am delighted to have signed an extension as I absolutely love life here at Ellesmere Port. I now have the motivation and the confidence to keep on going and trying to bring this club as far as we can go.

I am very proud to announce that the club has been granted planning permission to build a new stadium. It is looking likely to have a capacity of over 6,800 and should be finished after next season. This is fantastic news for the club as we want to continue our progress and also for the fans, who will be able to watch our matches in style. We do not have a name for it yet but until we do, we shall call it 'Vauxhall Stadium'. Hopefully we will have plenty of memories to savour there!"

Jer
9 years
Great stuff Justice. Congrats on winning the league and I think that you can do it again this season. Anxiously awaiting for the transfers though!
Login to Quote


After our glorious league victory last season, we climb up a division. The Blue Square Bet Premier will be a much harder challenge than the Conference Regional but it is one we will take. Our club is constantly growing in reputation and in belief. We are one step away from the Football League and that is where we want to be, no matter how long it takes.

Here are the expectations that I agreed with the board:

If we can somehow avoid relegation, we can then start preparing for a bright future with our new stadium which will be completed in summer 2014. I am happy with the wage budget as it give me a little room to spend on players.

The finances are far from being "in the black" but that is expected for a non-professional football club. My only concern is the loan debt which we must re-pay and the construction of the stadium will surely do our finances no good.

I am also very happy to announce our new sponsorship deal with Nike. They have offered us a great deal which we could not decline. They are fabulous kit makers and have made us a spectacular array of kits to choose from. Here are what will be our three sets of kits for the up and coming season:

My next update will be our friendlies and transfers. I hope you are all enjoying this story and will continue to follow

I'm confident that you can exceed the board's expectations this year and maybe even get promoted. Kits look very nice as well.

I will be updating later today


I was looking forward to a fresh season in a new league but first came the pre-season. We had some tough friendlies but we made a decent amount of transfers. Here are the results from the friendlies:

Far from being the greatest set of results but we will look to put that pre-season behind us and prove our worth once the season starts. Oni Anoruo and Michael Burns were the most impressing players, yet again. 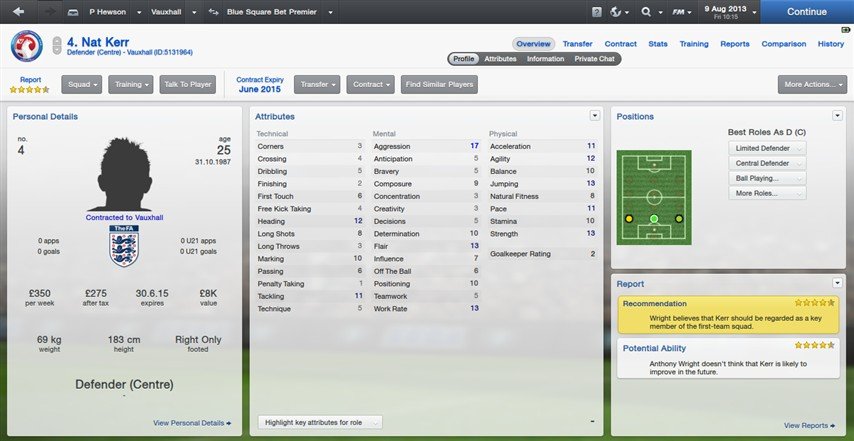 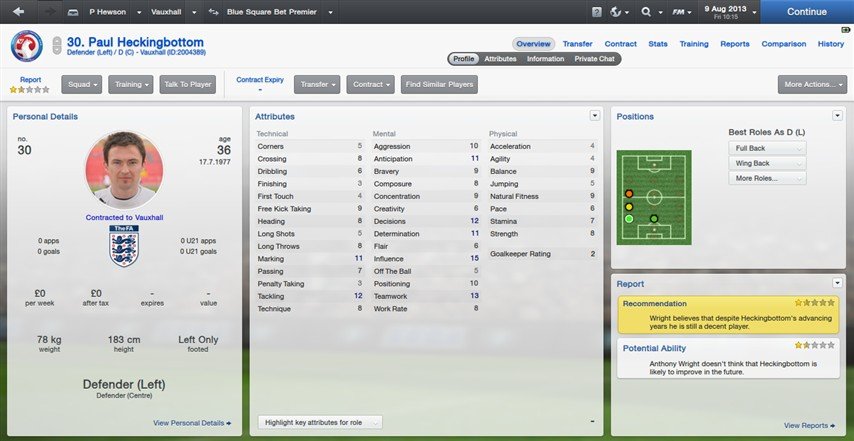 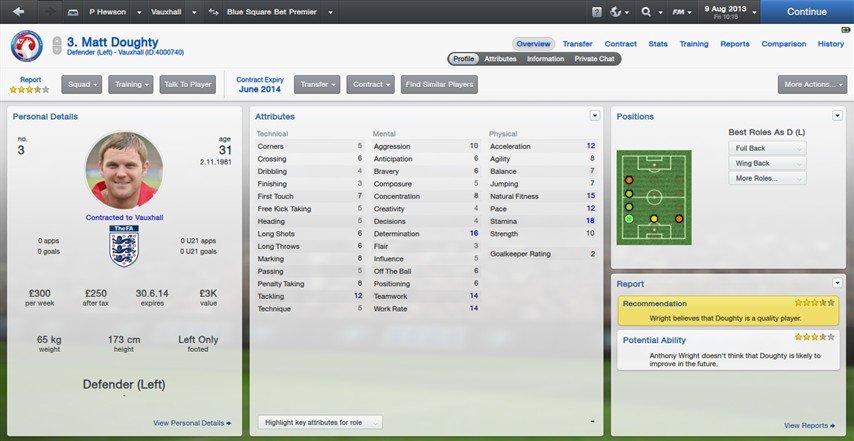 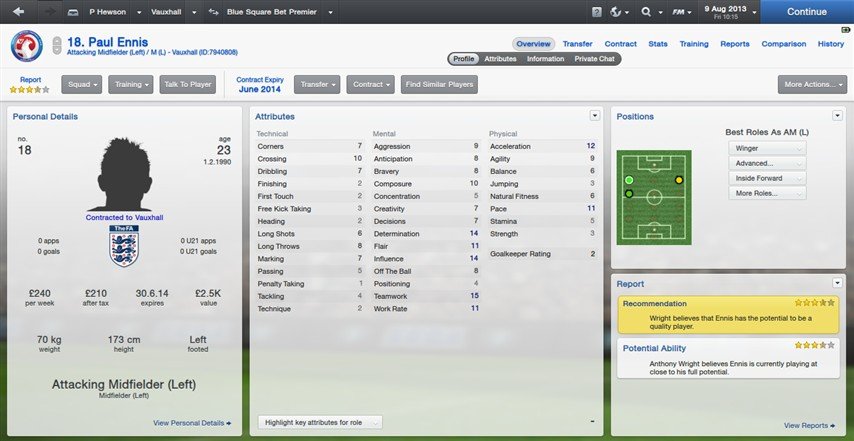 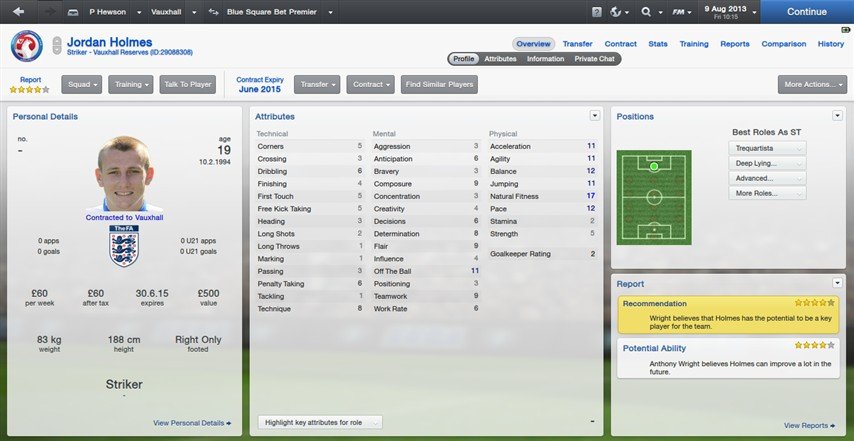 
Nat Kerr is a top central defender for Vauxhall's level and will hopefully form a successful partnership with Andrew Nicholas.

Paul Heckingbottom and Matt Doughty are both fairly old but they provide great experience and some qualities on the pitch. They will be important this season.

Paul Ennis was on loan with us last year and he performed very well. I took the chance to snap him up on a contract and he will be a good player.

Ray Putterill is a top left winger for the BSP and looks like he will be a focal point for us this season.


Jordan Holmes was a bit of a panic buy to replace Ashley Stott as back-up striker to Obi Anoruo. Hopefully he will be able to prove that he deserves his relatively high wages.

We have a very tough set of matches. Hereford, Hyde and Luton are big contenders for promotion and will prove to be very challenging. I would hope that we could get at least five points to help us to stay away from the relegation zone.

Let's hope for a good start to the season!


It was the start of the season and we were looking to start brightly. We were very confident, maybe over-confident. Would we be complacent in our opening games? Let's find out!

We were very poor. We were torn to shreds by Hereford in our opening game. Salisbury were weaker opponents but we didn't take our chances against them which is a real shame. I was very surprised that we picked up a comfortable win away to Hyde but our longest unbeaten run of the season, standing at one game, was ended swiftly by a defeat to Luton and then Dartford burried us in the sand. We took the game to Stockport and we scored in the last minute in real snatch & grab circumstances.

Obi Anoruo has been great so far, scoring four goals in five games. Hopefully he will score plenty more. 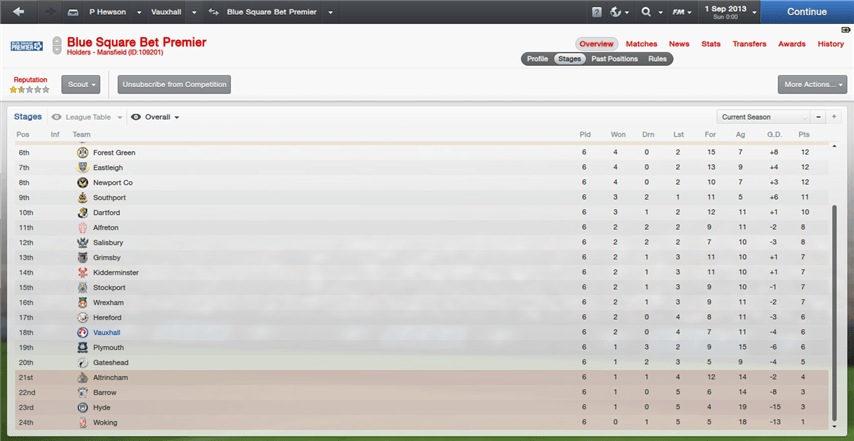 We are narrowly outside of the relegation zone. Hopefully we can stay away from there.

Our fixtures for September:

We have tough games against Plymoth and Wrexham. Hopefully we can pull together some sort of run to keep us away from the real danger. We are living on a knife edge at the moment and we need to start building our confidence again.

Glenn T
9 years
Come on Justice. A great club like Vauxhall can't stay in the bottom half of the table.

Shanked
9 years
If you manage to get points off the weaker teams you should easily stay up this season and build up to push for promotion next season.
1
Login to Quote