2013-03-09 16:52#83933 Jamesg237 : I have to say I thought having Bono as manager may have made this story a tad...weird. But it certainly hasn't, especially as you can include great songs like Beautiful Day. Reminds me of football highlights on ITV a few years ago.

Well done for getting to the top of the league. Really do hope you can stay there.

Bono and U2's songs will never be forgotten

Thanks for the comment, and I really do hope I can stay on top!


Hey guys, I have finished the month of January now. We came in to the month surprisingly on top of the table and we were hoping to finish the month in the same position. This is how the month went:

I am very happy to keep our unbeaten league run going. We continue to step up to the plate to grab results. We did well to beat Harrogate in the FA Trophy but Macclesefield are a class above us (and a division!).

Craig Mahon and Obi Anoruo have been our big performers this month. They have been excellent in our attacking play. 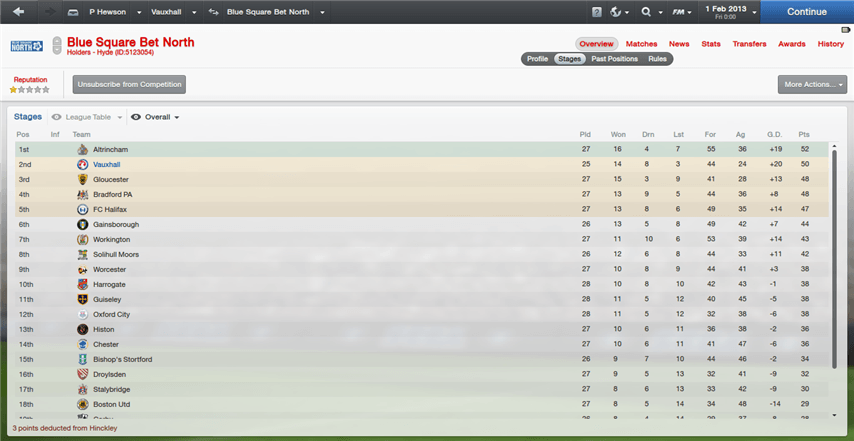 As you can see, we dropped down to second. We do have two games in hand to take a comfortable lead, however. We have the least defeats and the least goals conceded which really pleases me.


Here are our fixtures for February:

We have seven games to play and I would be delighted with five wins and two draws. I will hope to claim this target.

patrick1
9 years
you beat harrogate, how dare you lol nice results pity lost to maccs but are in a higher league but you only lost by the odd goal keep it up hopefully can achieve top spot
1
Login to Quote

The FM Rookie
9 years
I'd like to complain about a car you sold me. It seems to accelerate when free-wheeling up hills

I don;t know if I will be able to hold on but I will try my best!
Login to Quote


With a final spot amongst the elite teams in the BSN looking more and more likely, Paul Hewson's Vauxhall Motors were gunning for the top spot. Finishing in the top spot would not only give us the league trophy but automatic promotion to the Conference Premier.

This was far from the most consistent of months. Three wins, two draws and two defeats isn't ideal. The only positive is that Obi Anoruo scored seven goals this month. 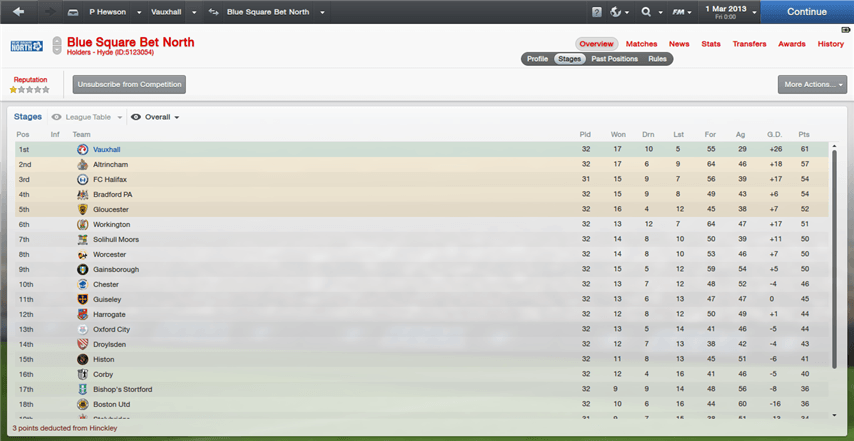 We are still topping the table by four points. Our goals conceded record is spectacular. Zak Jones has been incredible in nets and has pulled of some extaordinary saves to keep us in matches where we looked second best.

A man who has been showing his class this season is 21 year old striker Obi Anoruo. These screenshots tell the full story:

He has been a class above most other players. Being only 21 years old, he has pleanty of space to improve. I hope he performs like he has this season for years to come!


Here are our fixtures for March:

The Altrincham fixture might end up being the fixture that makes or breaks our title hopes. Hopefully we can get a firm grip on the league title before then.

loving this so much!!!
1
Login to Quote

Jer
9 years
Get a hold of that grip mate! Plus, Onaruo deserves it.
1
Login to Quote

loving this so much!!!


Thank you for such high praise!

Once this season is over, can assess our progress


Obi Anoruo is jut immense at the moment! Definately a must-bye for any Blue Square team!

JasonRM
9 years
Fabulous job in the BSN, loving the story and the amount of goals Anorou has scored. Keep up the good work!

Thank you for such high praise

I am enjoying writing this so much