With only a few months to go before the World Cup this summer, the last international friendly break is upon us. Giuseppe Bergomi and his highly rated Italy side will be taking on European powerhouse Germany in a week's time to test their World Cup mettle and see if they can mix with the world's elite.

This 23 man squad will be a strong indicator of how the team will be lining up during the World Cup this summer. Bergomi told reporters, "Of course I will use this game to look into a few different options, but also we want to try and look at potential teams I can put out during the World Cup."

If that is the case, a number of players will be worried about their potential spots on the roster for this summer's tournament. For starters, Mario Balotelli was left off the squad. The Real Madrid player, who is currently on loan at Bayern Munich, has scored 12 goals in 23 appearances this season, but was not given a spot. In his stead, Parma striker Alberto Paloschi has been called up; the 28 year old leads Serie A with 17 goals already.

Also worried will be defenders Domenico Criscito, Davide Santon, Mattia De Sciglio, and Giuseppe Bellusci. The Zenit St.-Petersburg left back Criscito has fallen behind Guilherme Siqueira in the national team pecking order, and it seems now that star Valencia fullback Alessandro Crescenzi is the preferred backup.

De Sciglio and Santon seem to have also fallen out of the national team picture. The fullbacks have only played 14 Barclays Premier League games combined for Manchester City and Tottenham respectively and thus have not warranted call-ups to the national side. Perhaps most surprisingly, though, Bergomi's own club player Giuseppe Bellusci also was not called up due to becoming 4th choice center back for the Nerazzurri. Marco Capuano has instead been brought into the 23 man roster.

Daniele De Rossi, however, continues to be picked. Despite being 34 years old, the gritty midfielder has impressed greatly in his first season at Bayer Leverkusen after AS Roma's relegation last term. The Italy captain has made 134 caps and will likely retire at the end of this summer's tournament.

LFC
8 years
What a team! Best of luck

Walter
8 years
I still find it weird the majority of your squad aint regens!

Jer
8 years
Very nice squad, best of luck, although you will not need it.
Login to Quote

Neal
8 years
LFC: Thanks mate, Germany will be a tough test but I'm hoping we can pull out a win

Walter: Yeah, so far it's only Mattia Ronconi, AC Milan center back / right back

Pauker: Against Germany? I'll need all the luck I can get

ITALY & GERMANY PLAY TO AN ENTERTAINING 0-0 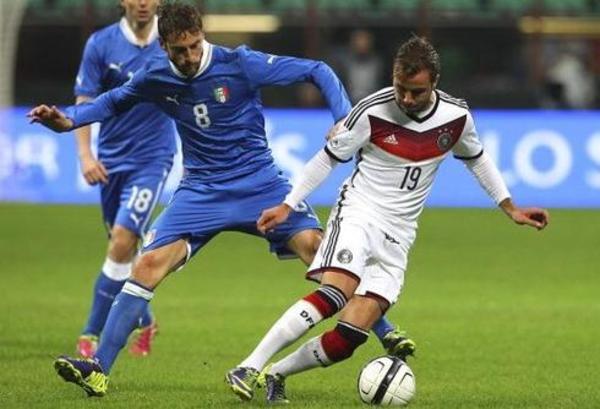 When the fixtures for this international break were announced, Germany vs. Italy stole the headlines, and for good reason. Two of the best teams in the world were to clash, both heavy favorites to lift the upcoming World Cup, and we'd get to see which team looked more prepared to live up to that billing.

The match started off with a bit of celebration for AC Milan youngster Mattia Ronconi, who made his Italy debut at right back at the age of 20. Along with him, five Inter Milan players started the match; Ranocchia, Poli, Crisetig, Insigne, and Destro, exemplifying the Nerazzurri's dominance and Bergomi's supposed preference.

The Italians were definitely the stronger side in the first half. In a matter of one minute (the 16th, to be exact), the Azzurri saw Bonucci's header crash off of the crossbar, Ranocchia's follow up be cleared off of the line by Benedikt Howedes, and Lorenzo Crisetig's long distance shot be just tipped over by Manuel Neuer. Things looked promising.

Not long after, Andrea Poli was causing havoc, beating Schweinsteiger and Lahm to put in a deadly cross to the backpost, only for Sebastian Giovinco's stunning volley to just creep wide of the bar.

After that, Germany found more of a foothold in the game, and the two sides went into the break level. Coming back out after halftime, Bergomi opted to introduce an entirely new striking pair, giving Alberto Paloschi only his second cap and Gianluca Caprari his very first. He also brought on Francesco Bardi for Salvatore Sirigu, the Ajax keeper's third cap.

Jurgen Klopp had certainly motivated his troops, however. Die Mannschaft came out with a vengeance, peppering Bardi's goal. The 26 year old was forced to make a string of saves against long range shots from Mario Gotze and Timothy Ayas early in the second half to keep things at 0-0.

In the 80th minute, however, things did turn a bit sour for Italy. Alberto Paloschi had to come off with a hamstring injury, leaving the Azzurri down to 10 men for the final 10 minutes. Germany stormed forward, but Francesco Bardi was up to the task making a number of spectacular diving saves against Marco Reus just before the final whistle to ensure the end score to be an exciting goalless draw.

"Obviously we wanted to win this game, but we fought to a very creditable draw in the end," said Bergomi after the match. "I think there were a lot of positives to take from this match, especially the first half where we played very well. Today we showed we can play with the very best teams, and that bodes excellently for the World Cup."
Login to Quote

Walter
8 years
Germany are a top nation, so this result is quite good

Aaron
8 years
I'm sorry but a manager of your class should be tearing Germany apart 10-0 any day.
Not good enough.
Login to Quote

Neal
8 years
Walter: Yeah I'll definitely take it, hopefully when it comes to the World Cup itself we can manage to nick that winning goal

ZapdosTheGreat: Yeah, after AS Roma were relegated, Daniele De Rossi's contract also expired so he made a free transfer over to Germany and now plays for Bayer Leverkusen

Nathaniel
8 years
Errmm, I am commanded to read this recent update story and I see you have stuttered to a draw with Germany. You have Destro, Insigne and Paloschi up top. You should be scoring 2 minimum. Also, you used the word "peppered". I am disappointed.

However the style and content of the update is nice.
Login to Quote