Louis O.
7 years
eb: I must admit I have not heard of Hernández either, but he seems to be quite the player! There is a screenie up in the update for you to look at and you can see that he's already gone up to £7m in value even though I paid £3.5m only!

TSO: It's not the most original idea ever but it's still amusing

Wellsy: Glad you think so

DeanByrne1995
7 years
You've just got your self a new follower

k1rups
7 years
The Sun?? I have a bit more class than that

haha 2 very good signings imo they will be great for you!
Login to Quote

Inq: Thanks mate, Diskerud won't join 'til January though

k1rups: Not possible to be classier than Page 3

Pre season is underway for the Lions and new boss Klopas 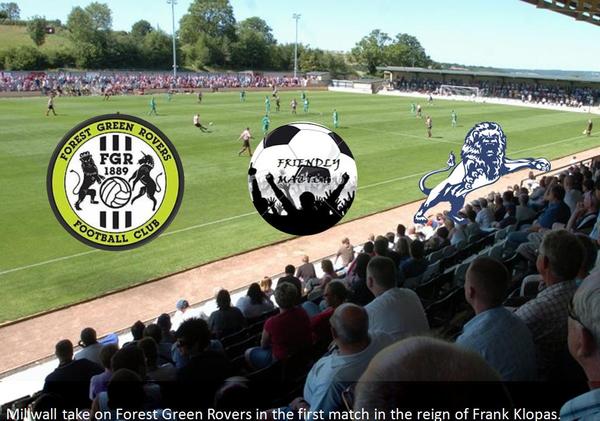 Millwall faced off against Forest Green Rovers in the first game of their pre season. New manager Frank Klopas took his side to the New Lawn in front of a mere 2,000, somewhat of a culture shock for the American given the large numbers and passionate crowds in the MLS.

Despite the clear gulf in quality between the two sides, Milllwall took a while to get up and running, but admittedly the Lions were playing a second string line up. The London club opened the scoring early in the second half through Rob Hulse and made it two later on with a Dany N'Guessan header. Both players were delighted with their contributions, as they look more likely to be bit part players next year. Hulse said afterwards:

"I think it'll be tough this year, there will be new faces, and I think the more experienced players will be let go, so I don't know if I'll stay at the Den much longer. Today I think I played well, I put in a good cross for the 2nd, and bagged a great goal too. I know it's not the most difficult of oppositions, but you can only beat what's in front of you." 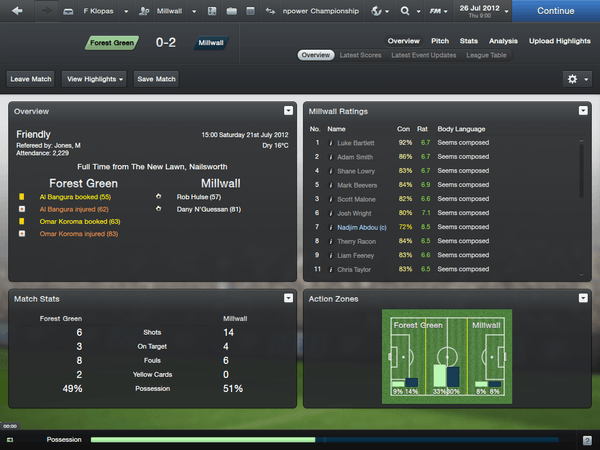 gambit84
7 years
Very nice start mate! Interesting choice, I did a story with Milwall in FM12... Will be following!

Gambit: Good to know you're enjoying it 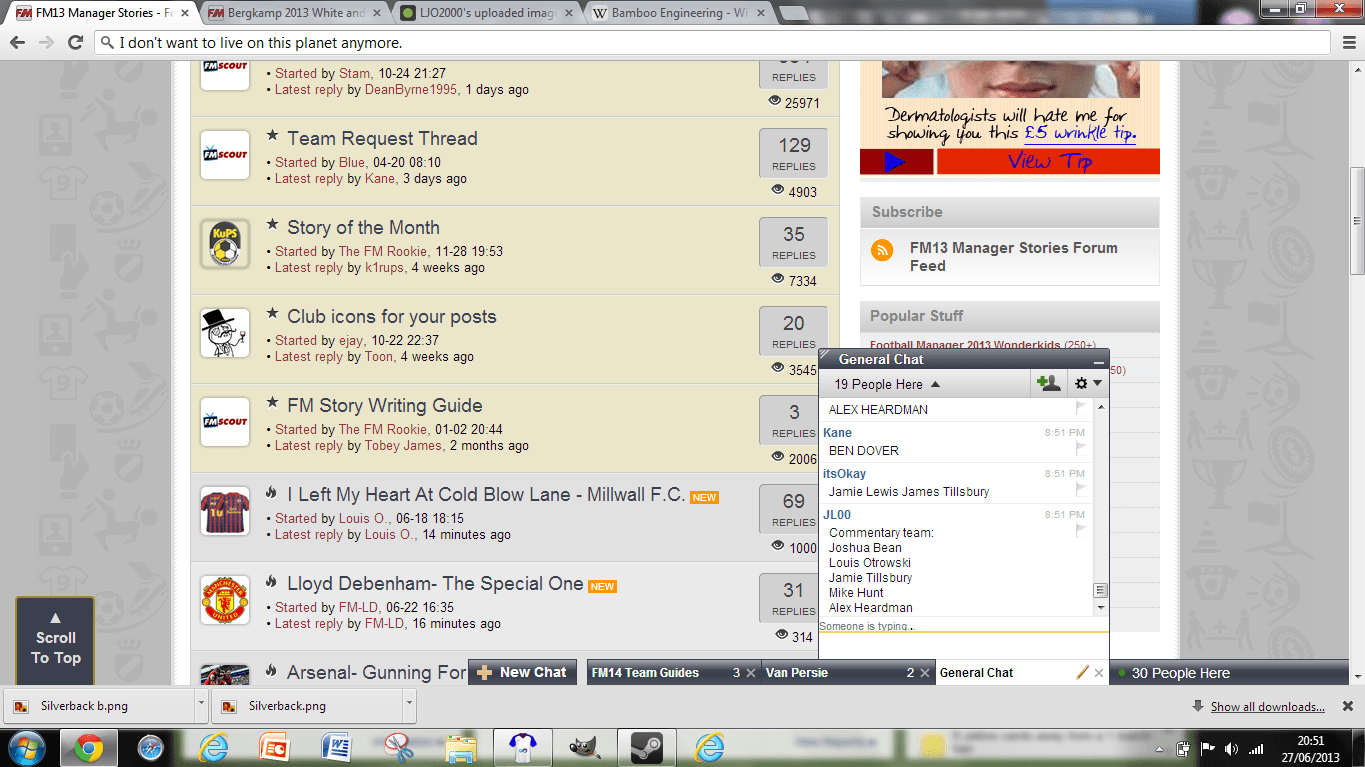 Rablador
7 years
That SS, complete with Ben Dover and Mike Hunt, may well be the best thing I have ever seen in my life. Millwall fans will be dancing to the Samba beats as the club confirm the signing of Bazilian wonderkid Wellington Nem. The 20 year old will join for £17.5m and reportedly turned down both Shakhtar Donetsk and Ajax Amsterdam before deciding Millwall was the club for him.

Nem will join from Brazilian club Fluminense, who he joined in 2007 as a youth player, and he has since spent time on loan at Figuirense and made 20 appearances last year for his permanent club. Despite not having much experience to his name, Millwall manager Frank Klopas believes he will justify the high price paid out for him.

"I think we've done well to get Wellington for 17 million, he's a top player already, and he'll only get better really, so I have no doubts he'll shine here. He's already been a favourite at Fluminense despite his age, so I'm confident he'll be a favourite here too. We've not overpaid, I think it's obvious, Shakhtar and Ajax came in for him too, so he's clearly a top player. He will be the Championship's player of the season, no doubt." 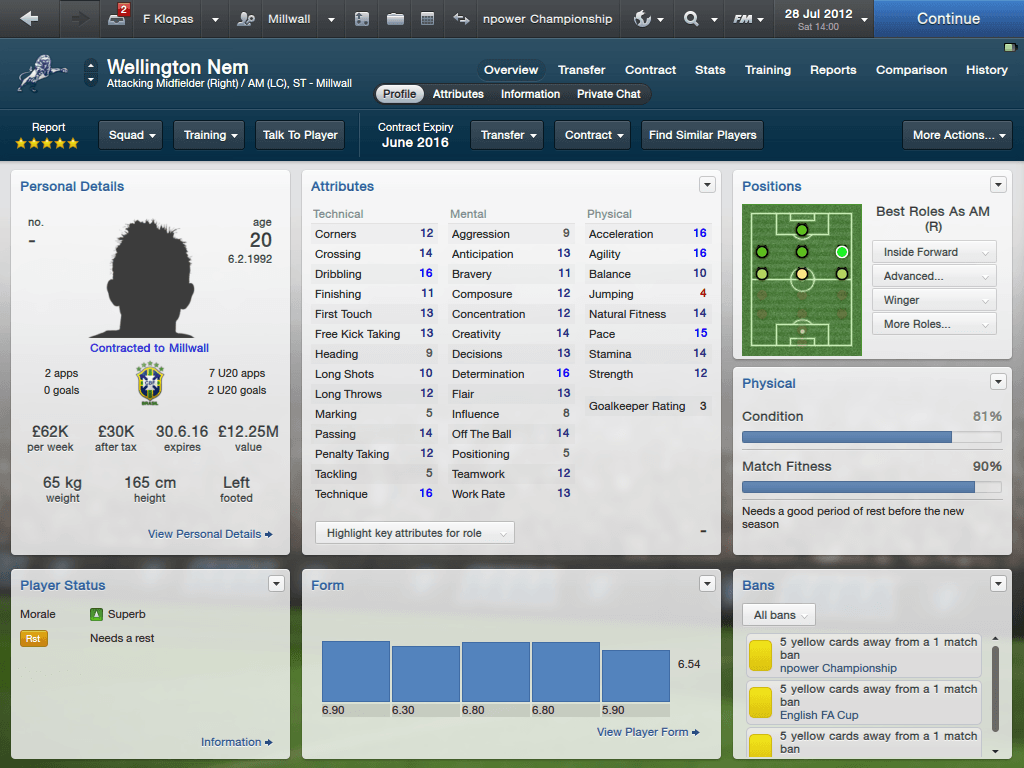 Justice
7 years
FANTASTIC signing! He will be boss!
1
Login to Quote