wellsy1498
6 years
Interesting to see how this develops with more money coming into the club.
1
Login to Quote

Jozef
6 years
no one likes Mr Jackett
Login to Quote


Who will Millwall appoint?

After Kenny Jackett's resignation from his post as Millwall manager due to the recent take over, us at FFT got thinking, after the statement about the American staff coming in, who might they be considering for the hot seat?

Jamie Redknapp:
"I think they'll have to get an American manager to come in with all the American players they are apparently looking for. The problem is whether they can persuade the top managers to come over, I think one man they could go for is Bob Bradley from Egypt. He has experience with the US's national side as well as Chivas USA and Chicago Fire, so he can certainly pull his weight at this level."

Alan Shearer:
" I think the biggest problem the new owners will face is getting someone from the States to come over, so why not take a British manager that's worked in America? That man is Martin Rennie, who is actually managing Vancouver Whitecaps in Canada. He will still understand the American football culture as he has also worked with Carolina Rail Hawks and Cleveland City stars, so he will be the perfect fit."

Neville Southall:
"Well if I'm brutally honest, the pool of managers they can find from America is not particularly talented, so they'll have to go without an American if they want to go up, and who better to fit the bill than my old team mate Robert Warzycha? He's been managing across the pond for a while, and he has the international experience that Millwall will need. He can easily be tempted out of his job at Colombus Crew because quite simply, he will take Millwall to the best league in the world if he joins."

Gary Neville:
"If they want the most American manager around, they can look no further than a former American international in Chicago Fire boss Frank Klopas. He has made Fire better than they have been for years. He's got international experience at playing level and he's got experience with young players, and he's the best person they can pick. I have no doubts Klopas can take them forward."

Tony Cascarino:
"As much as I enjoyed my spell at clubs like Celtic, Chelsea and Marseille, Millwall will always have a big place in my heart. I want them to do well and with all their money, I'm sure they can now attract top players, and a top boss too. If they have really high hopes, they may be able to attract the current national manager Jurgen Klinnsman. He is one of the greatest managers around. If they can get him, I know they will."

So who will be the new Millwall FC manager? Tell us who you think by tweeting us at #FourFourTwo!
Login to Quote

k1rups
6 years
Nicely written update mate! No idea at all who it might be though :p
1
Login to Quote

Lol, in all seriousness, that was a class update. Really well written and original

Louis O.
6 years
Wellsy: It'll be interesting to see who comes in as manager and also which players

k1rups: It might not even be any of those ones...

Beast: He's in the running

Jozef
6 years
I would like to say that the Colombus crew badge is the best badge I have ever seen.
Login to Quote 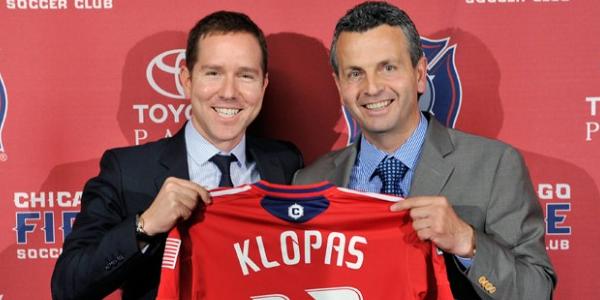 Klopas had a distinguished career in professional football, despite being born in Greece, he made 39 appearances for the USA, scoring 12 goals and played at the '94 World Cup and the 1988 Olympics. He played nearly 100 times for Chicago Fire and AEK Athens combined, scoring 12 goals, although he had most success with Chicago Sting where he scored 62 times in 140 games. He became interim manager of the Fire in 2011, and was later given the job full time. He also managed Chicago Storm, meaning Millwall is the 3rd club in his managerial career. He will be available for an interview before the club's first friendly game versus Forest Green, but he has already said of how delighted he is to receive the job.

"It was always going to be difficult to leave Chicago Fire but when an offer from a club such as Millwall came in, I don't think I could reject that. The club will be one of the best in a few years time, and I want to be part of it. How could I turn it down?"

Millwall are already searching for players from across the pond as they look to rebuild the squad with mainly American players. However, with criticism still coming thick and fast at the club, Jozy Altidore has reportedly rejected a huge deal, claiming it would not be fair for the club to buy all the best players around. Klopas however is reportedly looking for bargains rather than blockbuster deals, and has said he'd prefer to bring in some young talent to the club.

Jer
6 years
Not expecting that at all mate. Good luck!
1
Login to Quote

Louis O.
6 years
TSO: Either that or it is the worst

Pauker: What did you expect?

wellsy1498
6 years
Wow good luck. With the new owner have you used any editor

Inquisition
6 years
Story looking great so far! Keep it up!
1
Login to Quote

Louis O.
6 years
Wellsy: Yes I have, but there is still a twist coming