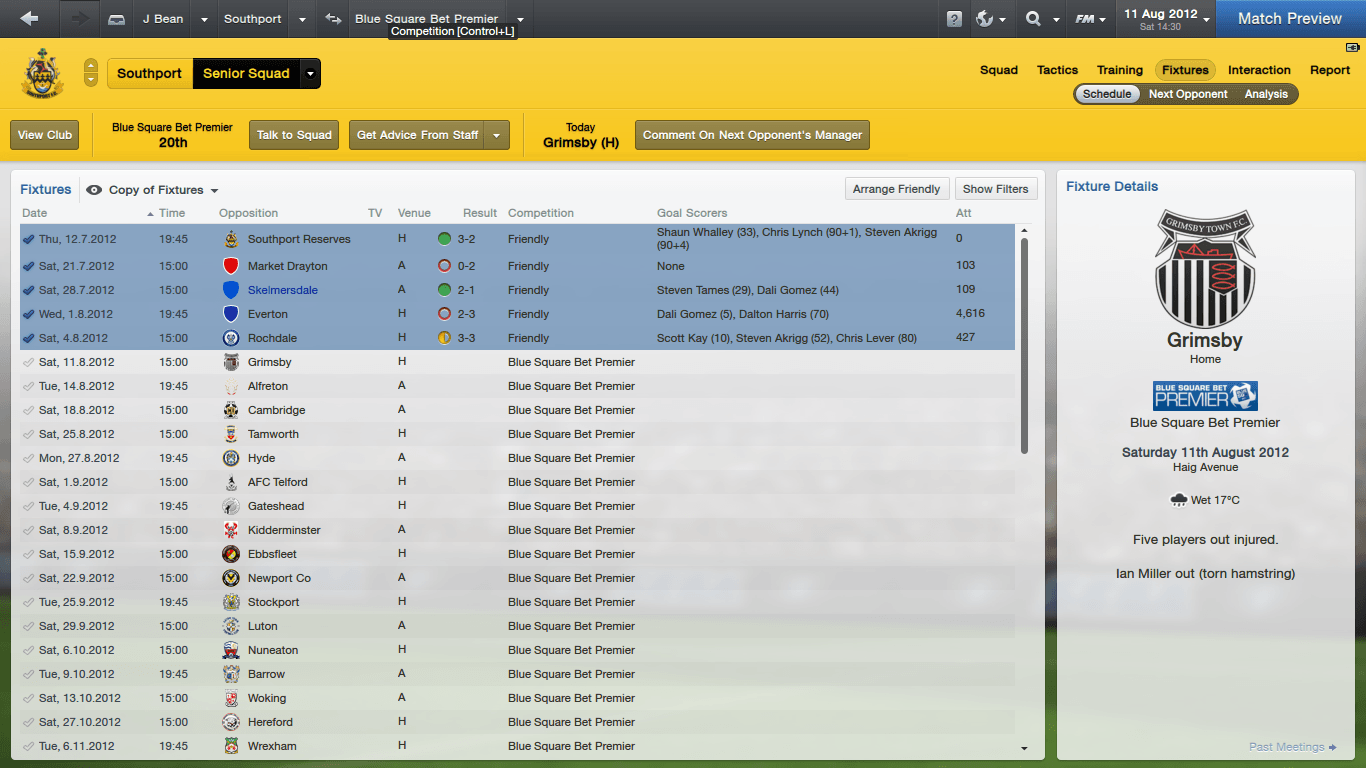 Joshua Bean's first ever pre-season in football has the left the fans of Southport excited for the start of the new season. Southport may not of won all their games but they fought hard against better teams and only lost to Everton by one goal leaving the fans very pleased. Bean asked the fans to remain patient as he claims the players are still getting used to the tactics he is installing.

Bean stated. "It is a good pre-season for us and I can fully expect us to fight for a play-off spot this year. But I do also urge the fans to understand in the September/October period we will really struggle due to the matches coming thick and fast but all in time we will be fine."

Deleted
7 years
Decent pre-season, how do you think you'll do this season?
Login to Quote

The Special one: Cheers and thanks mate

Decent Start For Bean And Southport

Life under Joshua Bean has started of better than expected for Southport with them only losing one game in the first five of the season. Bean has quickly been established as a counter attacking manager setting his midfield up with five midfielders and only one striker. His team sits back throughout the majority of the match and soak up lots of pressure then break very quickly through their wingers. Southport have shown they are very clinical when give the chance and will punish teams if given the chances. Southport fans will be delighted with this surprise start to the season with many pundits expecting them to fight relegation after such a tough off the field build up. But things have started well for the under pressure manager. 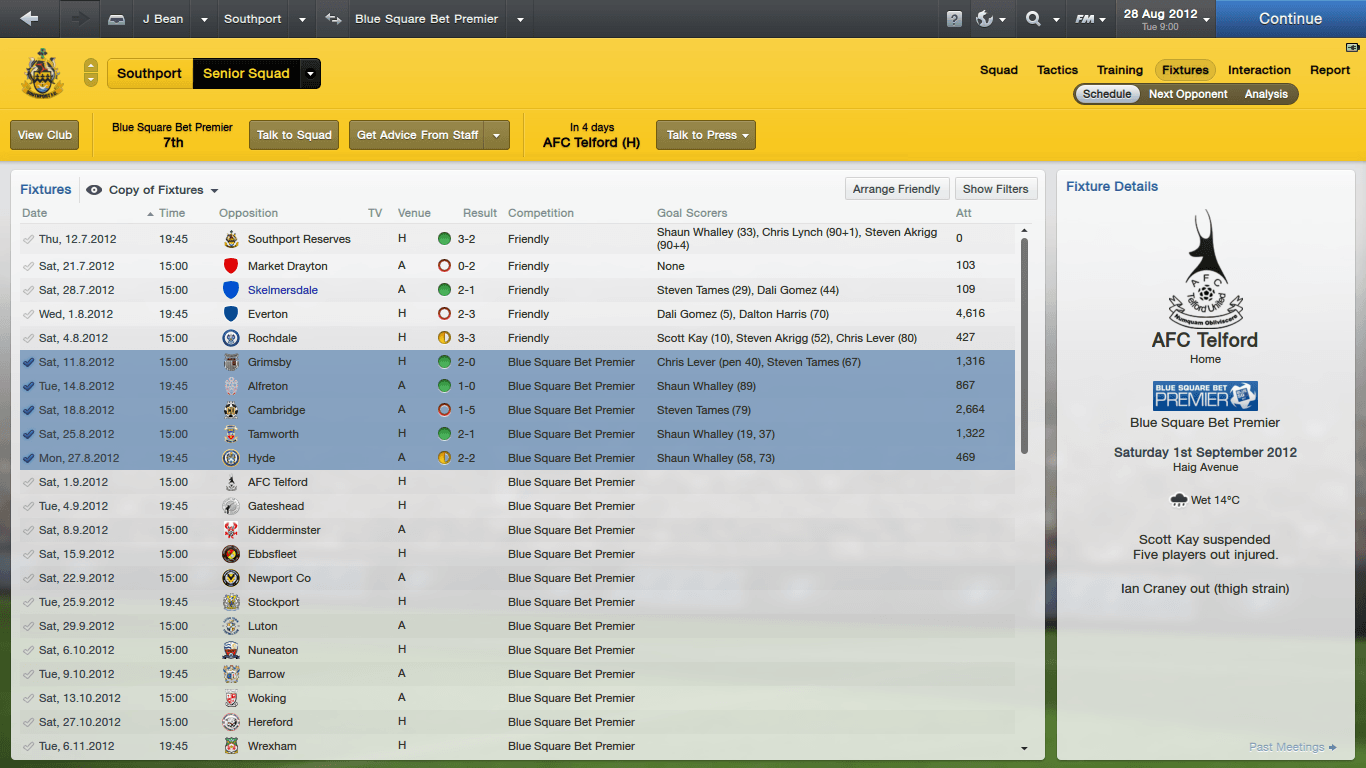 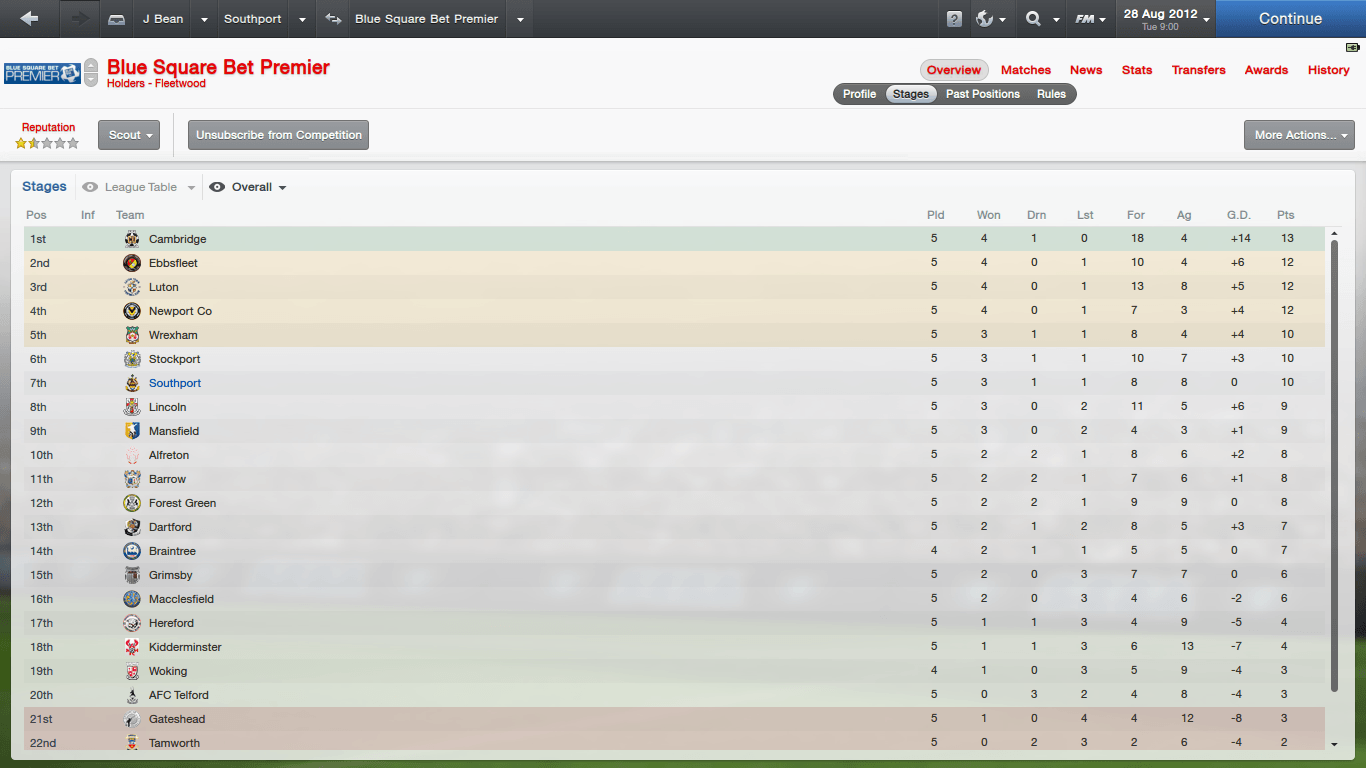 Goal of the month: The goal of the month also goes to Shaun with a great individual effort. He took the ball in his own half passed to the man next to him then received the ball straight back. Ran past two opposition players and as cool as you like slotted the ball into the bottom corner.


A very poor two months has seen Southport fall down the table rapidly much to the fury of the fans. The fans were left stunned during the two months when Southport went on a six game streak without winning one of them. The fans were quick to turn on the manager Joshua Bean claiming that he does not know what he is doing and that he should not managing their club.

Bean however has hit back at the fans who are threating to kick off again. "I find it bemusing that these 'fans' so quickly are turning on me and the players. We try hard and we will fix this issue. But we have just had a bad two months. That is literally all it is and all it will be. By the end of the season the fans will not even remember this poor form. Any fan who is thinking of kicking off can leave the ground. We will find the true fans out soon enough." 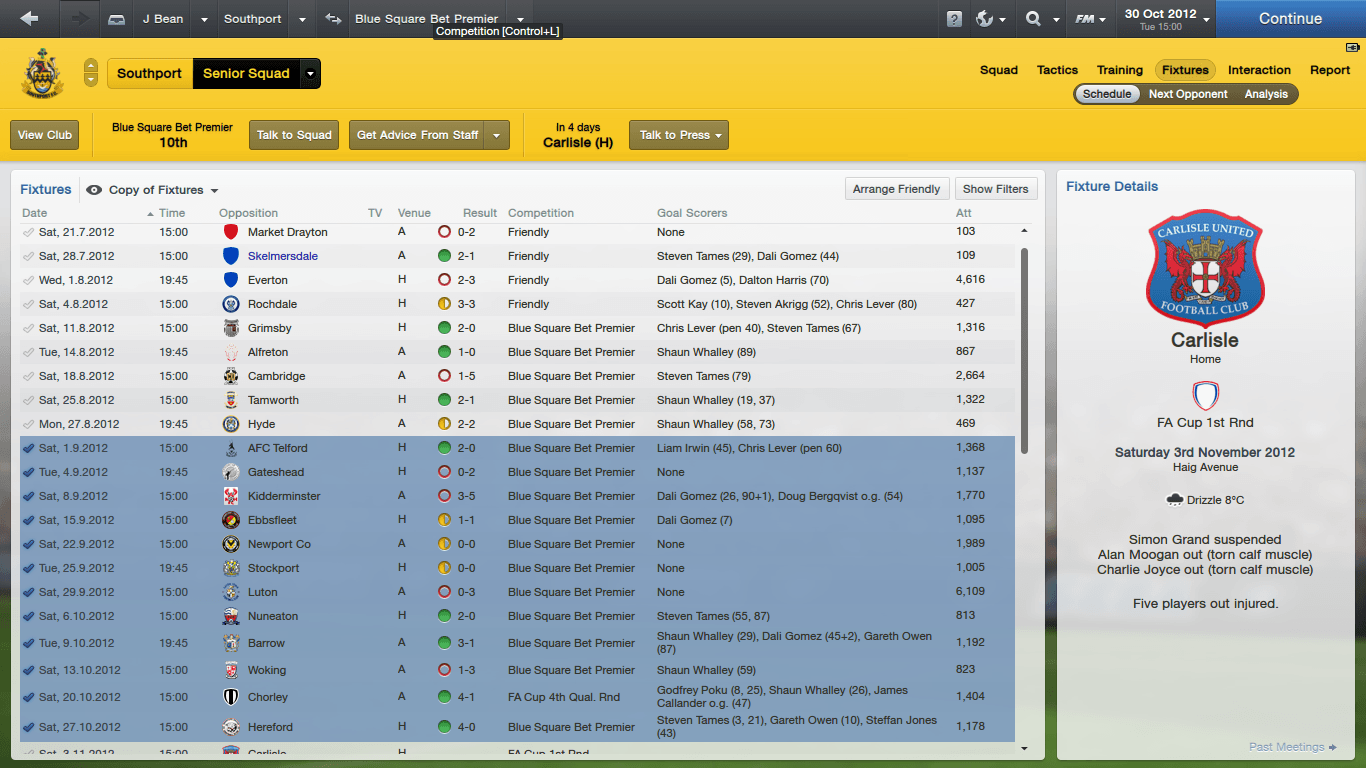 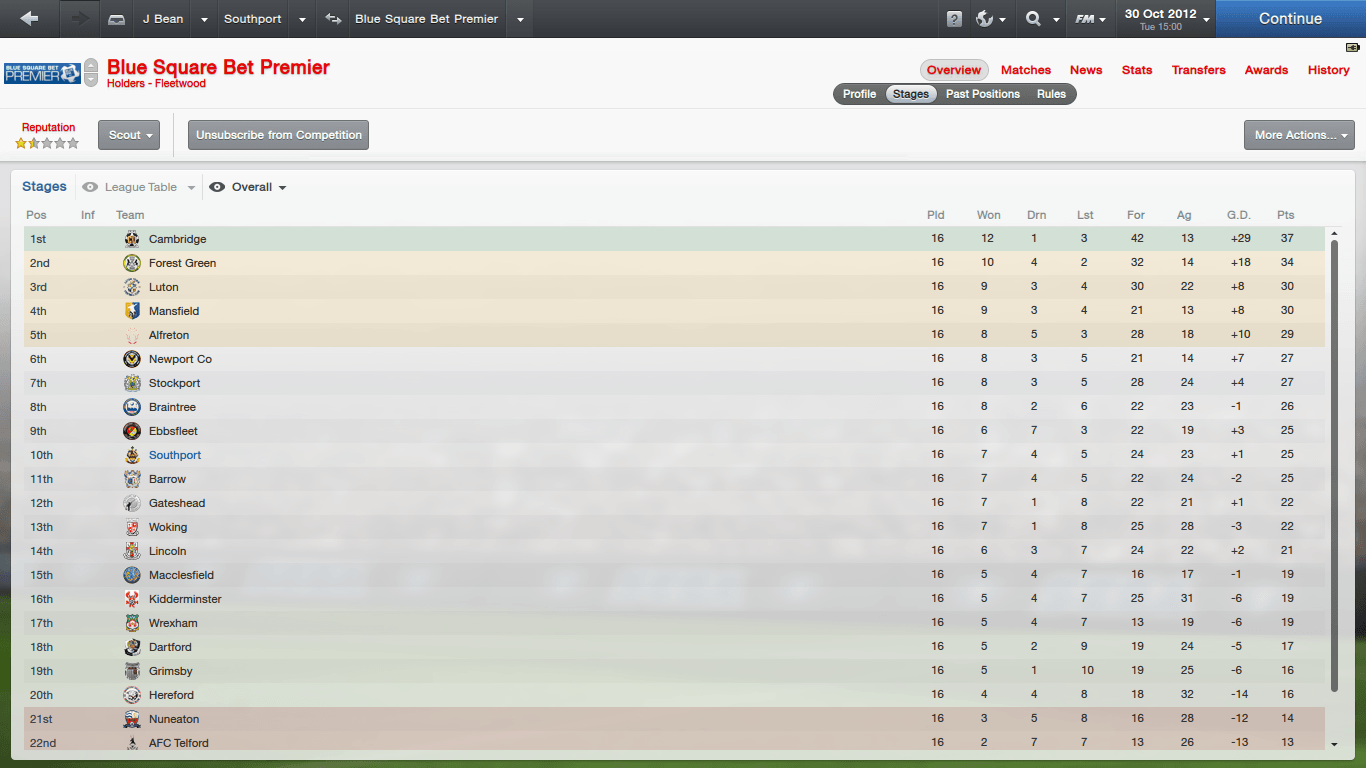 shylax
7 years
I know that feel, going on a losing streak and trying everything to turn it around, you know you have a quality team but it just isn't coming together right. I know you can turn it around!
Login to Quote

Another Poor Month For Southport


Life at Southport for Joshua Bean has started well and the pressure is seriously starting to mount from the fans. Despite the fact that Southport were only expected to finish around 13th or 14th the fans are not happy with the fact that Bean has led them to 11th spot. The board however have quickly came out to support Bean in his career so far.

"All this ridicule from the fans is completely ridiculous. Bean is so far doing a splendid job and the fans need to realise that they are doing more harm than good." 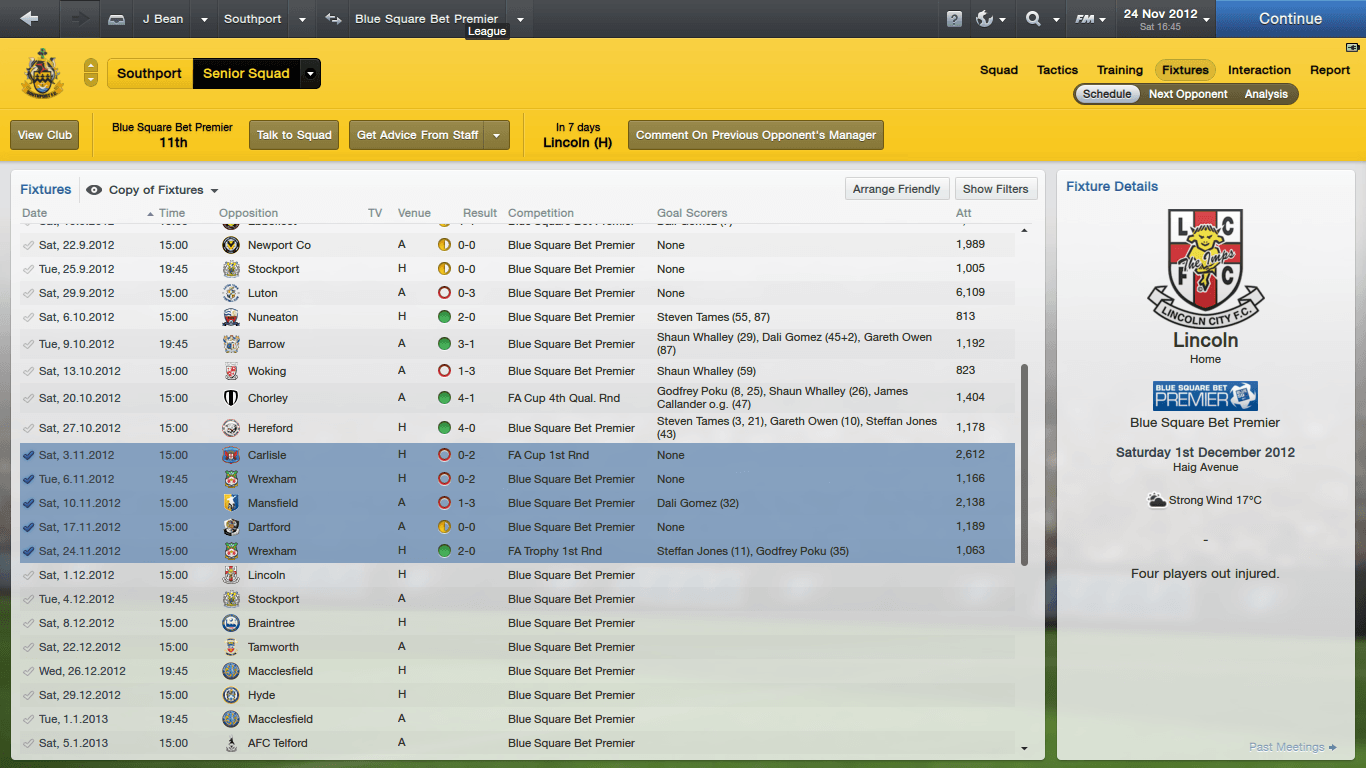 
Player of the month:
Even though this was a very poor month we deserve to give this to at least one player. Steffan Jones my centre back who prevented my side to being slaughtered every game and without him we would not of even won one game this month. So well done to him! 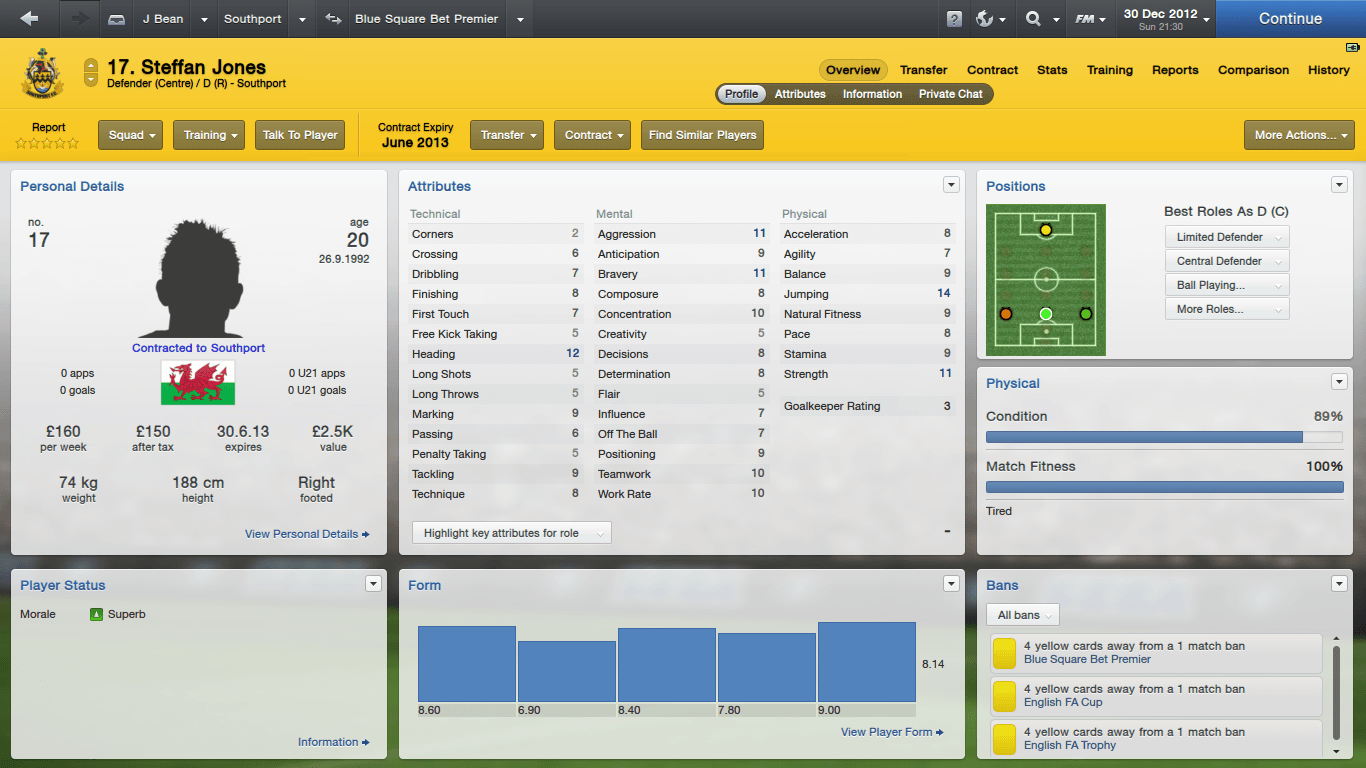 Goal of the month:
Gomez scored the only goal in a 3-1 defeat to Mansfield and it was a nice goal. From on the edge of the area he curved the ball into the top left of the goal to give the fans something to cheer about.


Obviously I am not very happy with how things are going but I am certain that I can turn things around regardless of our current form. The fans however need to be more patient with me and the players.
Login to Quote

Deleted
7 years
Not the best month, but once you get on a bad run in the BSP it's quite hard to turn it around!
1
Login to Quote

No1VillaFan
7 years
I am FRIGGING LOVING THIS STORY. A poor few months so what stay in the division and work towards a big push next season
1
Login to Quote

jasonvilla4ever: Thanks a lot for the support mate

And that is the plan thus far
Login to Quote


After three months of poor form Southport have turned things around with a stunning set of results. Southport did not lose a single game in all of the Christmas period and only dropping four points out of twenty four. After three months of pressure Bean had vowed to make it up to the fans and make a surge for the play-off places and that they have done. The fans finally accepted Bean this month as his name rung around the stadium during their three nil win against Braintree.

Bean has accepted the fans sudden change of heart by openly praising the fans for being the true fans that he knew they could of been. Things at Southport are looking good at this moment of time. 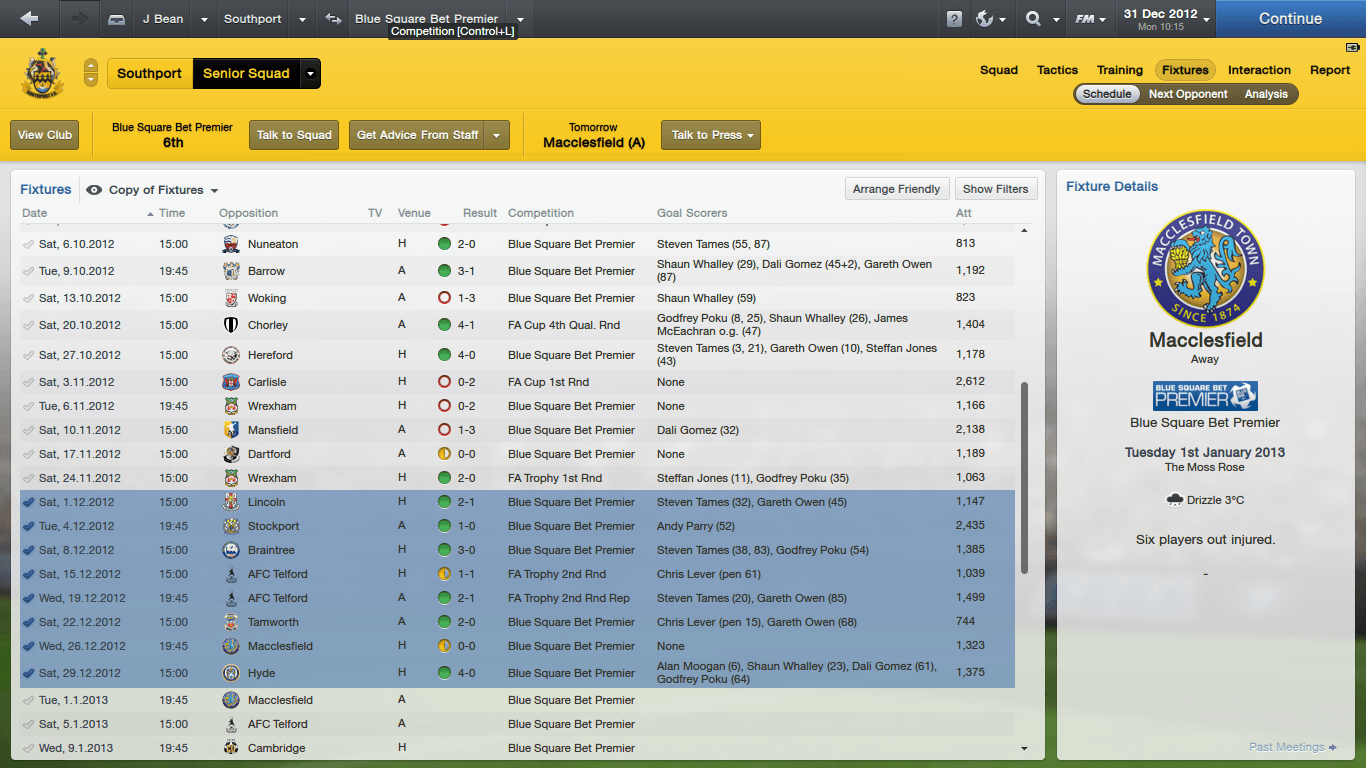 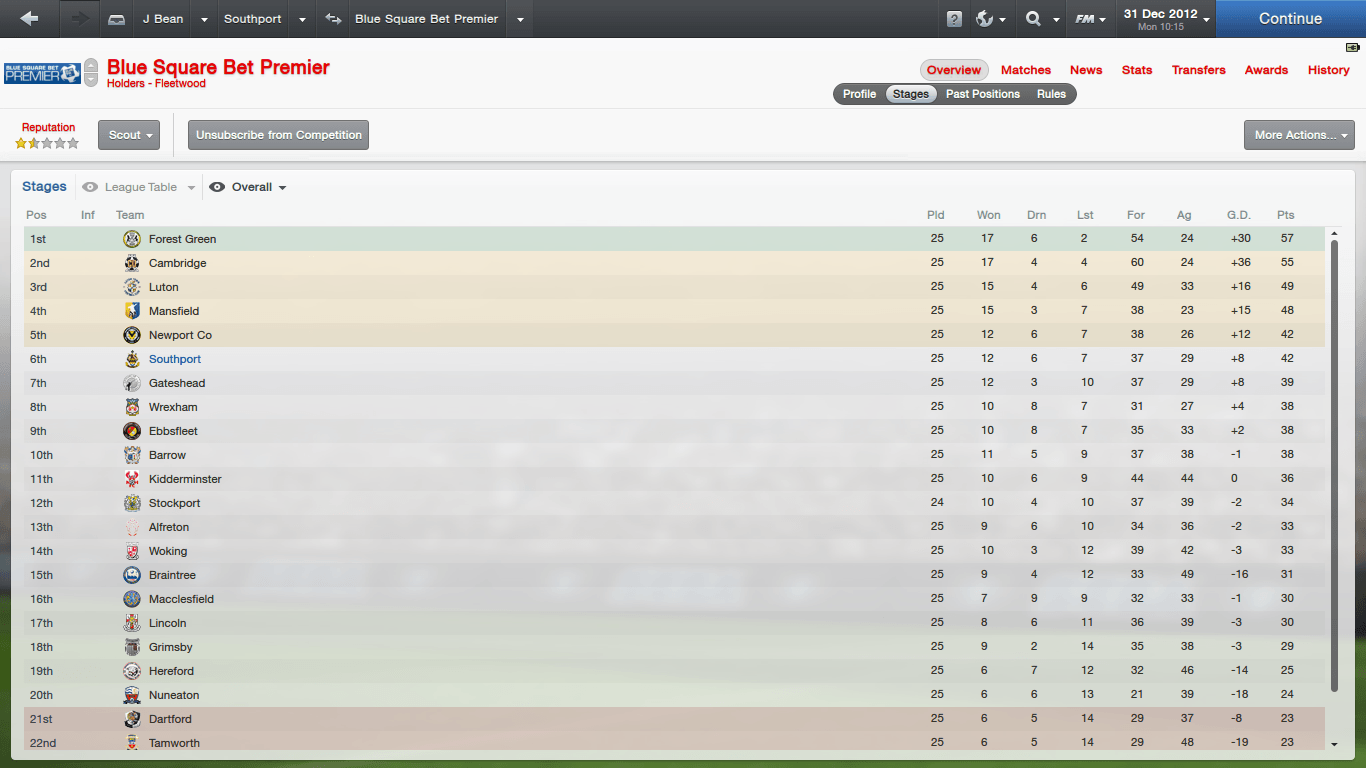 
Player of the month:
Gareth Owen has been a machine at the back so far and even chipped in with a few goals of his own to help the team to this play-off push! 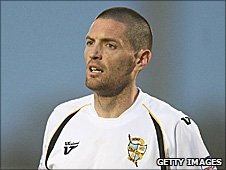 Goal of the month:
Goal of the month will be given to Steven Tames who scored a thunderous volley into the right hand side of the net leaving the keeper rooted to the spot. A cracker! 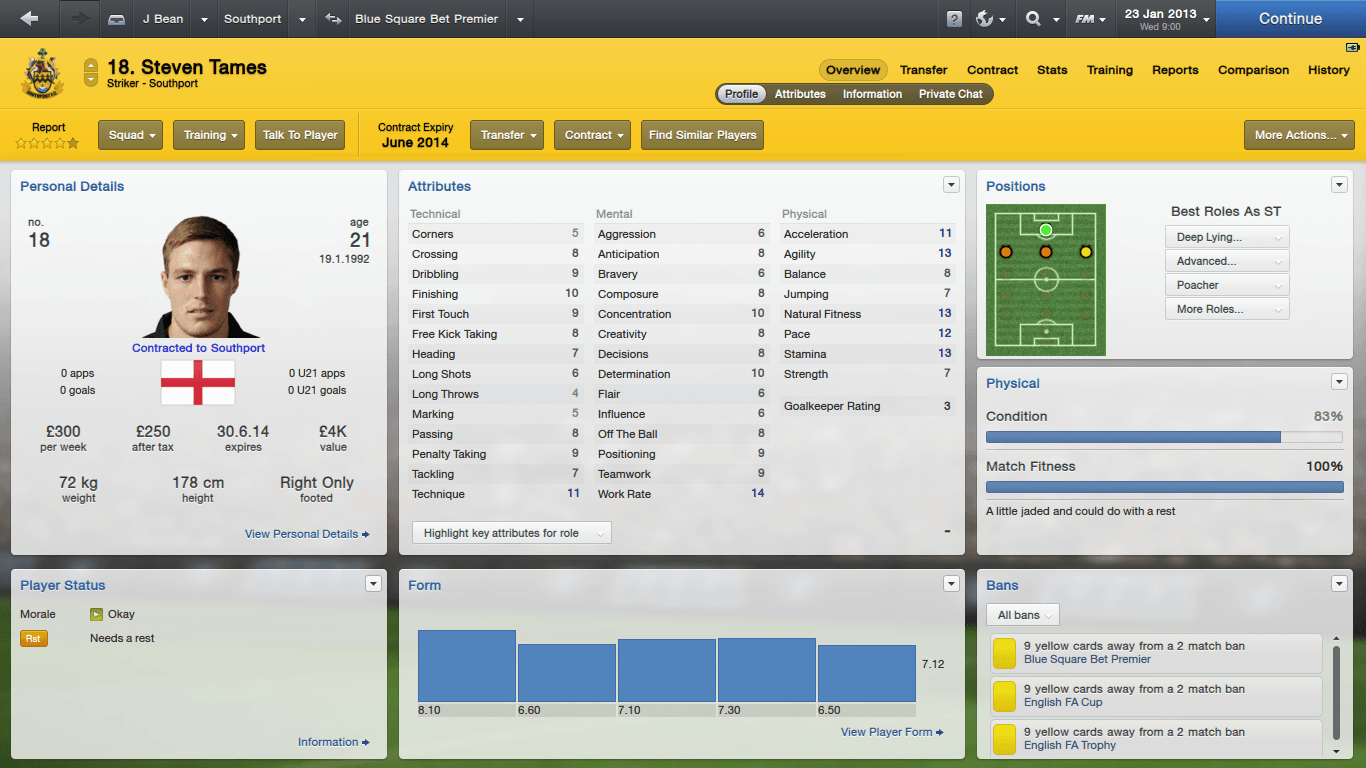 
I am very pleased with this month! Even if we don't carry this vein of form on then we have still secured ourselves a top half finish unless we completely collapse beyond repair. So a good month for us!
Login to Quote