Jozef
7 years
Great month mate, keep this up and you could be promoted.
Login to Quote

wellsy1498
7 years
Keep going mate and hopefully you will be promoted.

If you get them far then prepare for the championhsip.

BeanyUnited
7 years
The Special one: Hopefully mate thanks

wellsy1498: Never managed in the championship before so I am looking forward to the challenge when I finally get there!
Login to Quote

Mix Two Months For Southport Leaves Them Lagging Far Behind


A very average two months has left Southport miles behind in 14th place with all chances of a play-off spot gone meaning Bean can start thinking for next season in the league. However the cup run is very much still on. Southport have shocked the conference by getting to the final of the FA Trophy after a 2-1 win on aggregate against Mansfield. 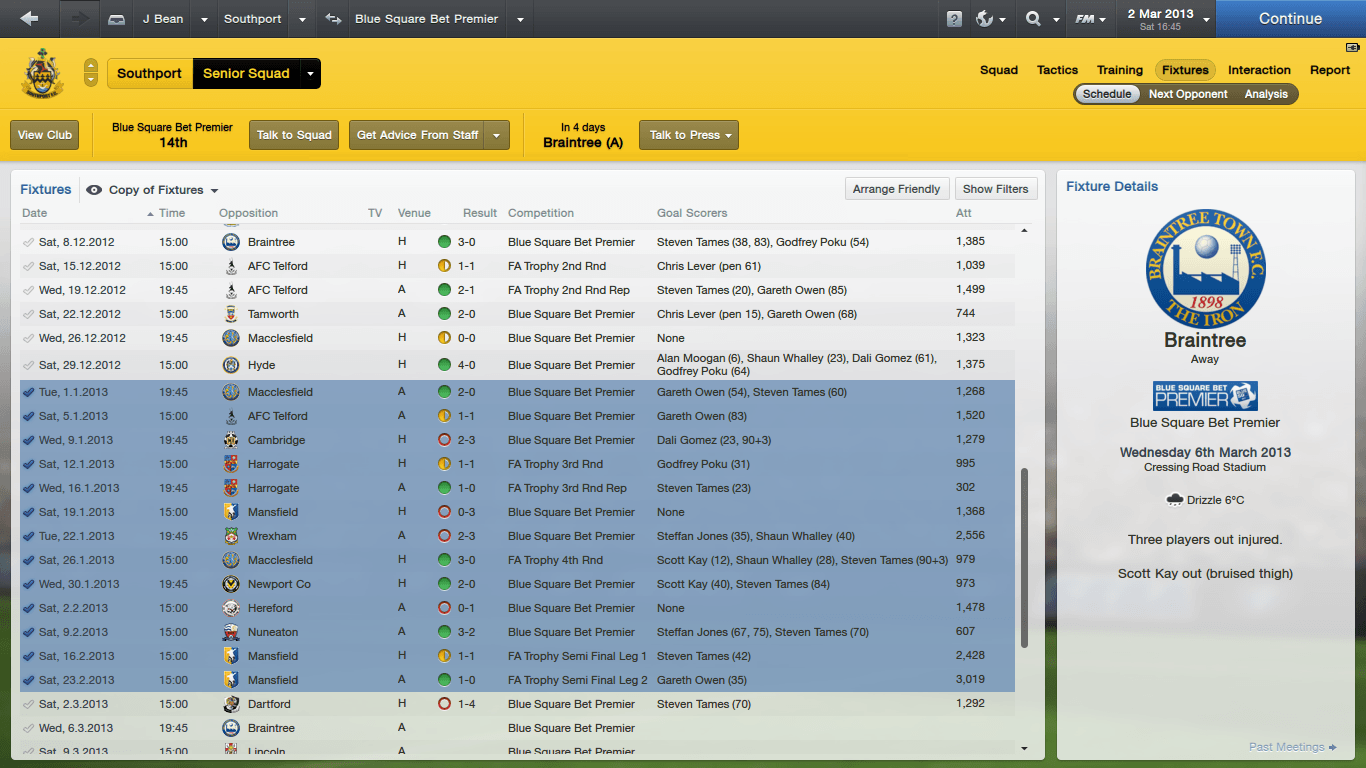 
A stunning two legs with my counter attacking tactic working to a tee here today. We soaked up all the pressure from Mansfield and hit them on the break on all three separate occasions. The fans went mental when the final whistle went in the second leg as they invaded the pitch to celebrate with the players. 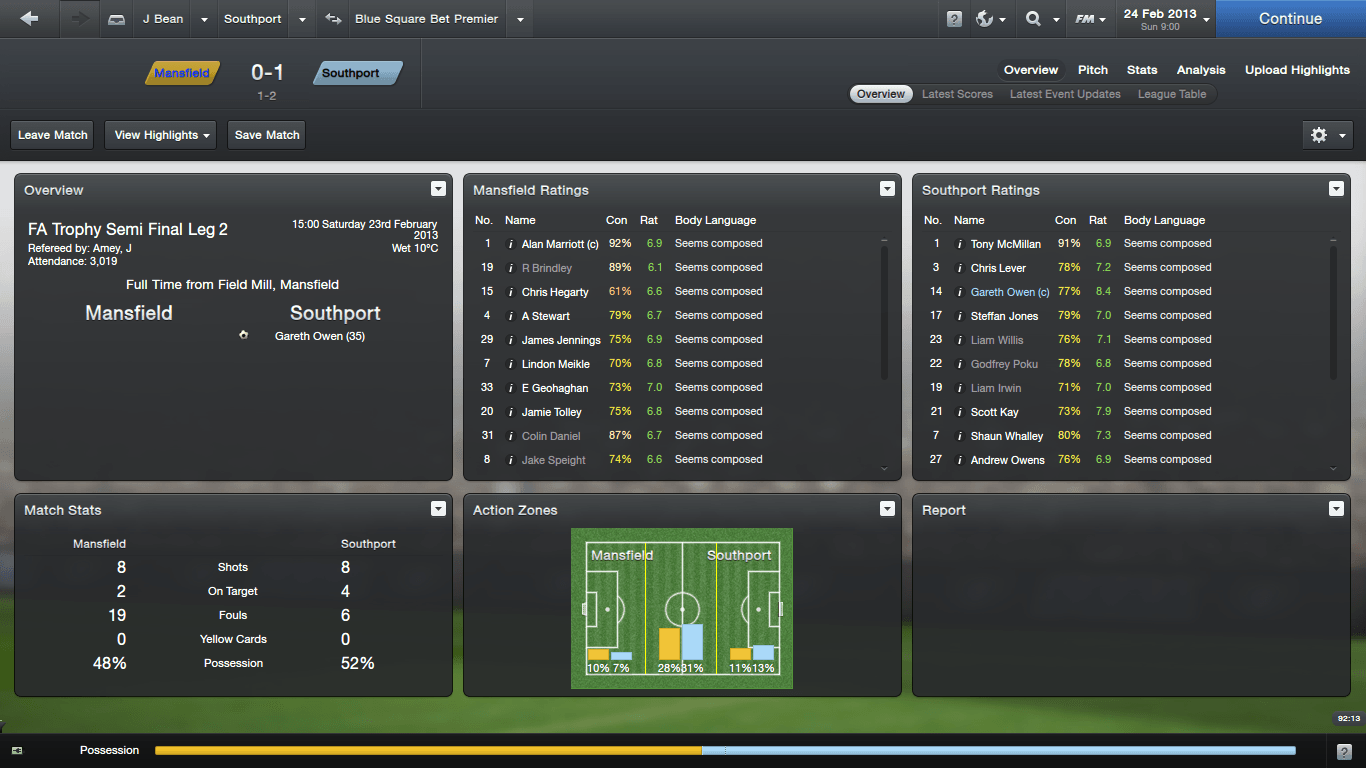 
Joshua Bean is delighted to announce that he has got a new two year contract worth £1000 p/w which is a very impressive wage for a conference manager. This contract has helped form stability within the team. 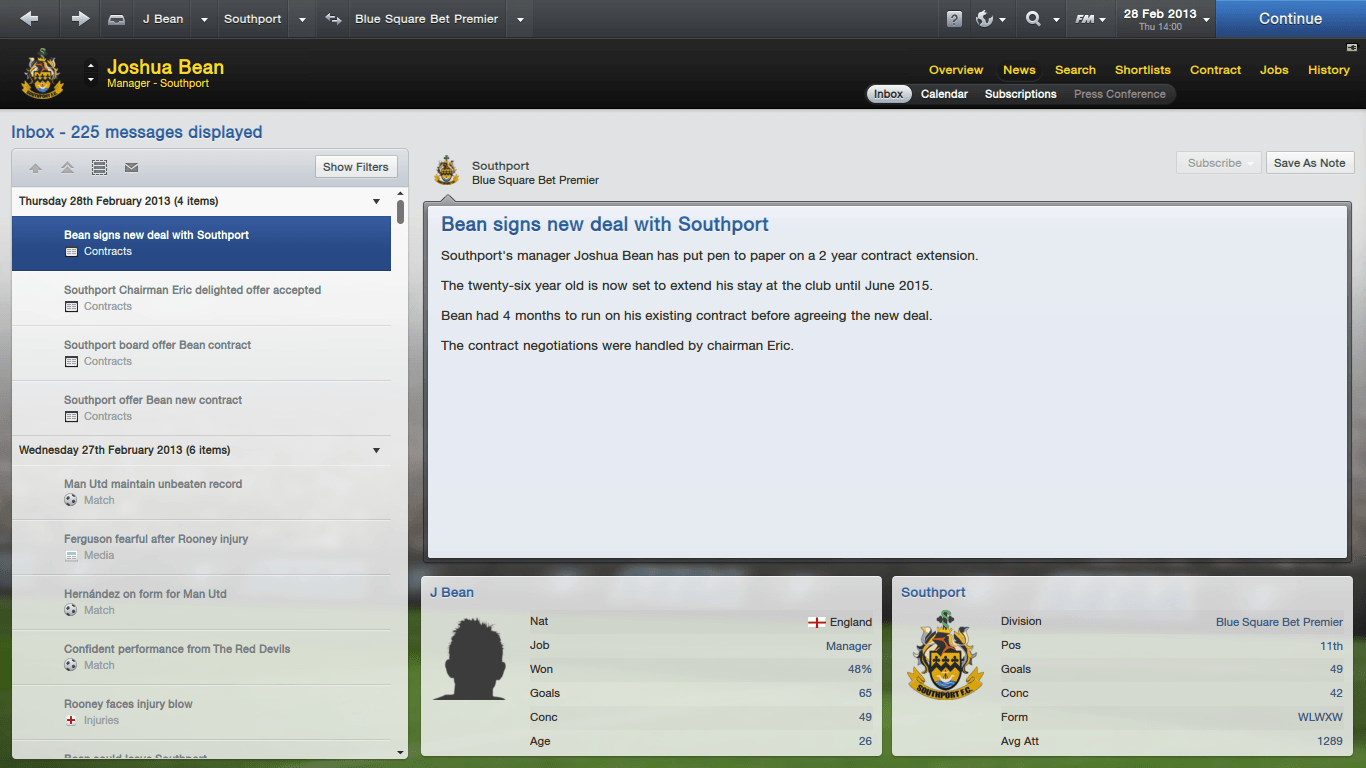 
Player of the month:
Gareth Owen scored the vital goal in the second leg against Mansfield but not only that he was the 'rock at the back' throughout the entire two month period. He was on stunning form and kept us in the games for the majority of them.

Goal on the month:
It may not of been as spectacular as some of the other goals but Owen's header from a corner against Mansfield to take us to the final is my vote for goal of the month! Huge goal.


Very mixed feelings on these two months. Firstly our league form was awful but on the other hand we have got to a very unexpected final which no one at the beginning of the season would of expected. I also got another new contract which will keep me here for another two years.
Login to Quote

Rablador
7 years
How are you only 14th! Those are some great results!

Justice
7 years
You're doing well, unfortunately your players don't seem to have that footballing "brain"

gambit84
7 years
Coming here a little but late... but the story looks awesome and I will be following!

BeanyUnited
7 years
Rablador: Conference is very hard to be honest. Have a bad run and your fall behind by miles. It is a less talented version of the championship

Justice: My players are idiots

gambit84: Thanks a lot mate


Today is the day that Southport and Joshua Bean has been waiting for. The FA Trophy is Southport's last chance to win any form of silverware, the league is finished for Southport as they have no chance of winning the league or getting to the play-offs. The final is the last chance saloon for Southport to win any form of silverware in Joshua Bean's first ever season in football. Many fans have stated this week that if Bean manages to bring home the trophy then it will still be a year to remember for all connected to the club. Southport have lined up with three in central midfield to stem the flow of the never ending attack from a very attacking Eastleigh side. Southport are set up very much to hit Eastleigh on the break as they pore their wingers and wing-backs forward. Southport have got the pacey Gomez up front who will help with the counter attacks more than most strikers.

7:34 Gomez through ball to Whalley. One on one with the keeper he hits the bar!! Southport have the first chance of the game but it goes begging.

34:00 Winnall has the ball for Eastleigh he turns and shoots JUST WIDE!

45:00 Half time here today a very average first half but Southport have most likely been the best side.

67:23 Eastleigh have a free-kick just outside the Southport box. To be taken by Hughes. He runs up and hits the post! Eastleigh are getting closer!

92:00 Eastleigh corner here last kick off the game before possible extra-time. Winnall curves it in HUGHES!!!!!!!!!!!! GOAL!!! 1-0 EASTLEIGH WITH JUST SECONDS LEFT WAIT IT IS CANCELLED! IT HAS BEEN RULED AN INFRINGEMENT OF THE KEEPER!

101:00 Gomez a great one-two with Poku he shoots and it is cleared of the line by Todd!!

123:34 Hughes screams for the ball as Eastleigh counter attack. He receives the ball inside the area. He strikes at goal it's wide!


Eastleigh penalty 1: Peacock runs up to take he scores in the bottom left corner! He sends the keeper the wrong way! 1-0 Eastleigh

Southport penalty 1: Lever to take here for Southport. Long run up and he blasts it into the top right corner!

Southport penalty 2: Grand to take here. GOAL!! 2-2 Bottom right corer great penalty keeper was no where near it.

Eastleigh penalty three: Williams to take for Eastleigh. IT'S SAVED!! SOUTHPORT HAVE THE UPPER HAND!

Eastleigh penalty five: Leadbitter need to score here or else Southport win the FA Trophy. HE SCORES!!!! THE GAME IS STILL ON!!

Southport penalty five: Gomez with a chance to win the trophy for Southport. HE HITS THE POST!! GAME STILL ON!

Eastleigh penalty six: Little to take here. IT'S SAVED!! STRAIGHT AT THE KEEPER! WHAT A HOWLER!

Southport penalty six: Jones with a chance to win the trophy for Southport..... HE DOES IT IS IN!!! SOUTHPORT HAVE WON THE FA TROPHY SENSATIOANL!!!!!

The players and fans stream onto the pitch as Bean sprints on in pure ecstasy this is what football is all about! Well, I guess one of them had to

Justice
7 years
Congrats on the cup win, that's already one more cup than I have in nine seasons

Justice: Haha I didn't get promoted though

The end of Joshua Bean's first season in charge has drawn to close. It has been a very good first year for Bean guiding Southport who were only expected to finish 13th to 9th spot and a dramatic and very unexpected FA Trophy win against Eastleigh has already etched Bean's name in Southport's history books. But are greater things to come?

Bean has promised that next year the Southport board will heavily invest in the side and Bean will give promotion a real push next year. He had this to say.
"I am delighted with how the season went this year. To fall so far away from the play-off spots hurt us but we carried on fighting for higher places to get some much needed money to invest in the squad and we did that. But I am delighted I was able to give the fans a unexpected trophy with a tense win on penalties! It has been a great season but I really believe next year can be our year!" 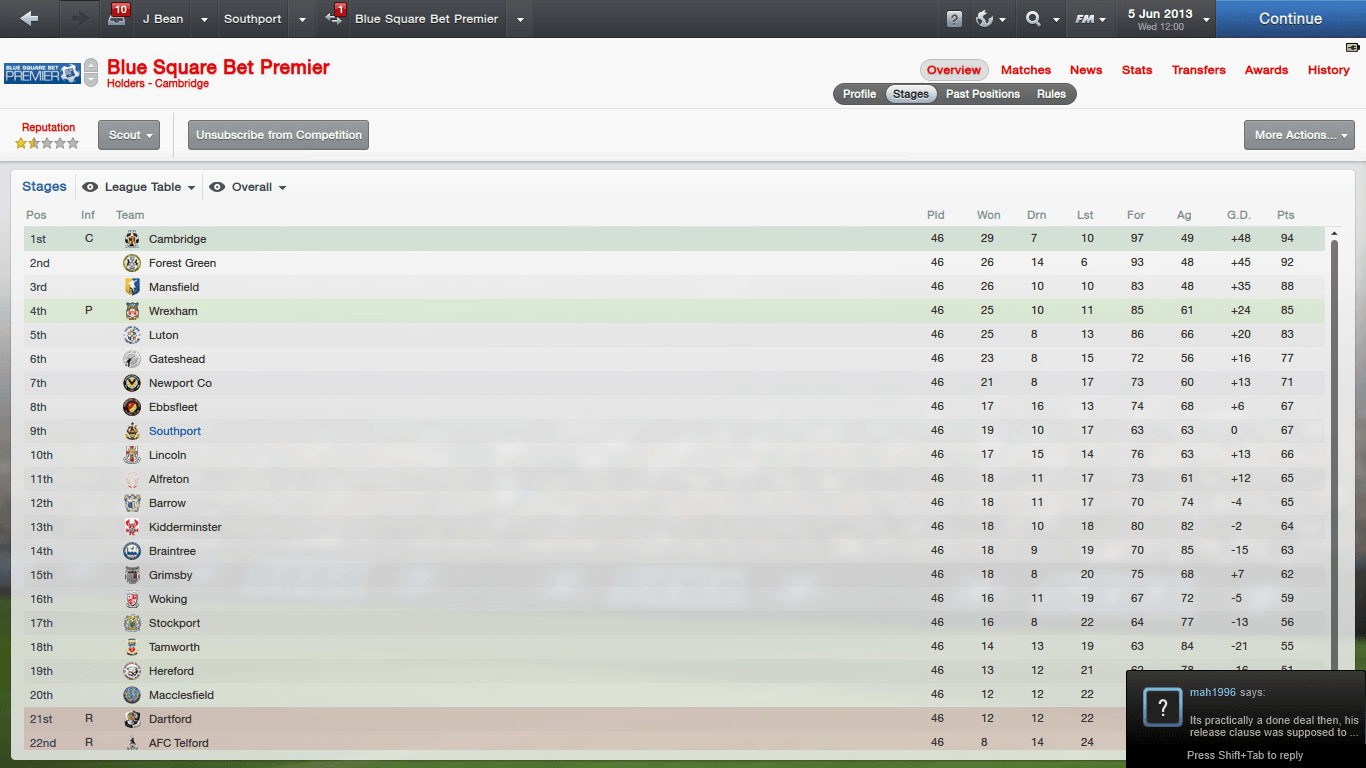 FA Cup: Expected exit first round. Exited after the second round.

FA Trophy: Expected exit the second round. Won the cup.


Player of the year:

Goal of the month:

We had several great goals this year but the best was scored by Whalley in the first month of the season. He scored a stunning volley from just outside the area to win the game.