Before match i had last talk with Sylvestre. I wish him all luck and i responded with confirm to four teams so that he can chose his next team. So right now i am with 3 forwards and Duje Cop will be given bench and chance to show what he can do. I am also hapy with transfer, Sylvestr was pretty good sell for us. Of course i hope Beciraj will continue his great games and hope players will cope with new tactic which will be not too much tweaked but i have no DLF and that will change a lot in front of opposition and back. Press conference went well, only Pivaric didnt was not happy with it. We also signed 23 year DL Thiago Carleto from Brazil to have more players in defence. Of course he is very good player and have much more that Ruben Lima or Pivaric but it is still soon and he will need to harmonize with squad and i will need to find space for Pivaric who will probably play more forward but i am not one hundred percent sure do we will need to make some changes in tactic because Pivaric and Thiago Carlos both can play wingers or DL positon while i do not prefer wingers in any tactics plan. So i think that first half of the season Thiago will be rotation because Pivaric showing that he is a for every game. We also get Bostjan Cesar and i cannot wait to see what he can do. He will play defence and will be first team player from begining. There is Sodini from Bastia and we didnt spent too much money on him, i know him good and i hope he can make contribution to defence. We wait to see when we will can register both three players because without them it will be hard to keep defence fresh for all games.
Login to Quote


Almost all set for match and fans are coming to stadium which will by information be full for eternal rival. 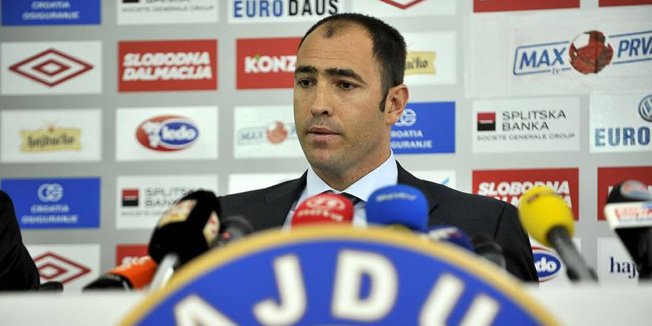 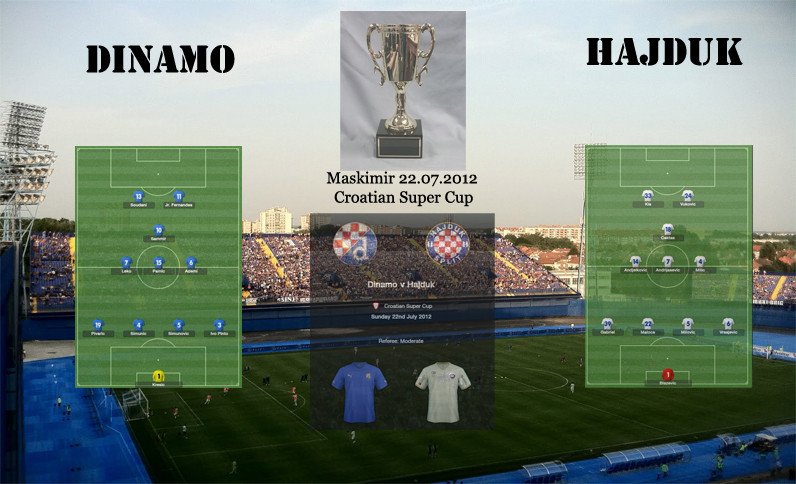 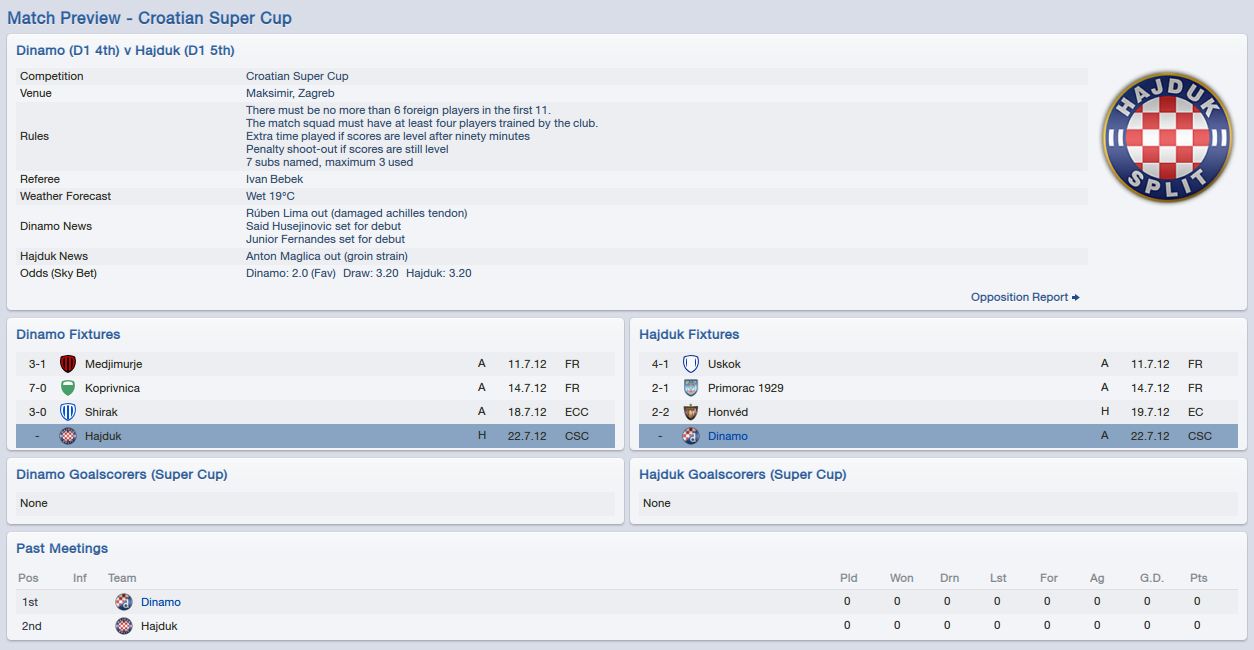 5' Goal for Dinamo! Soudani scored with header after excellent cross from Ivo Pinto from big distance.

8' After goal to 8 minute Hajduk was trying to get in game right away. There was a nice Pivaric tackle on Andrijasevic in penalty area for second corner. After that Pivaric runned trough whole pitch and cross it low for Soudani. It was key tackle in penalty area by ***.

13' Goal for Hajduk! Cakas puts the ball into net after Kis found himself in plenty of time to cross nice ball.


14' Sammir has tryed long shot but it goes wide. 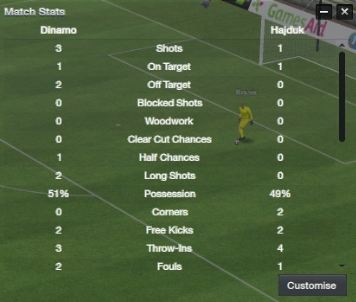 20' Soudani tryed his luck from long distance but Blaževic is focused.

23' Andrijašević found Vuković who breaked defence and turn over result.

24' We have Anđela down on pitch to tell us if she had some reports on Dinamo and Hajduk's bench.

Anđela: yes, well after goal whole Hajduks bench jumped out. Tudor is standing on manager line lookin calm what is going on while Mr. Diazepamll i swearing on players, and gives direction to hassle Hajduk players and to pump the ball up to attacking players. He also saying to Sammir to get himself trying put more ball in the box rather than shot. 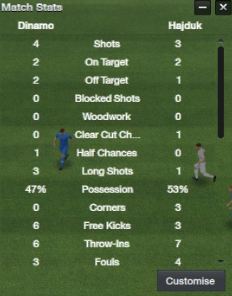 31' Soudani was in great situation when Fernandes pass him a great ball to box.

37' Caktas was in chance but off target

HALF TIME AT MAKSIMIR - DINAMO vs HAJDUK 1:3 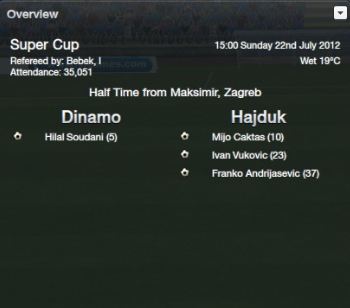 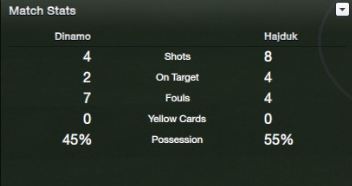 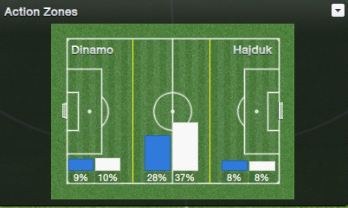 45' Bebek has given sing to start second half

Pivaric goes to his place. 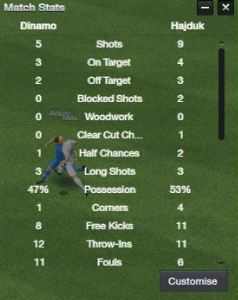 Dinamo fans are getting out of stadium... they seen enough.

Anđela, do you have some information what is on Dinamo bench?

Anđela "Well yea, Diazepam is constant standing and looking kind despite result is on Hajduk side". Also too add he does not speak to no one and right he kicked a bottle of water." 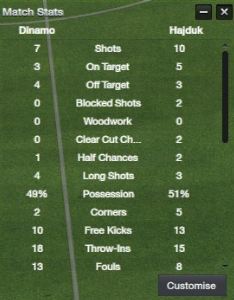 78' Mr Diazepam showing all players to move up.

79' There was mess in Hajduk defense and Dinamo players looked penalty on Soudani but Bebek do not show on spot, after that Cop missed best chance for Dinamo in second half.

83' Dinamo manager swearing, belive you can hear on tv. He is screaming to players to defend. 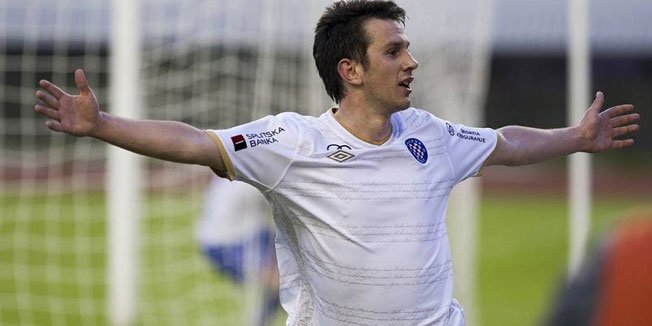 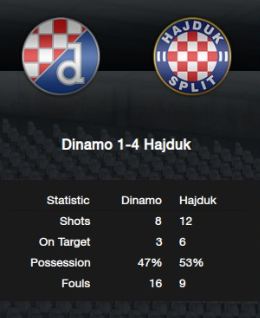 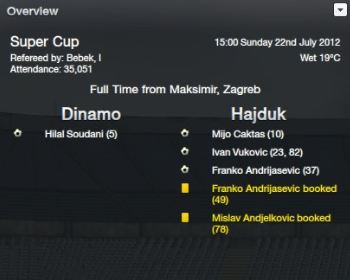 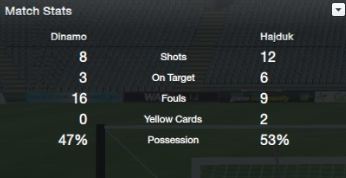 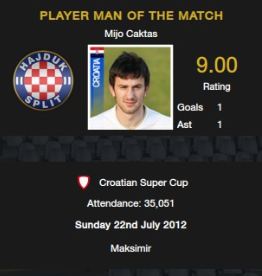 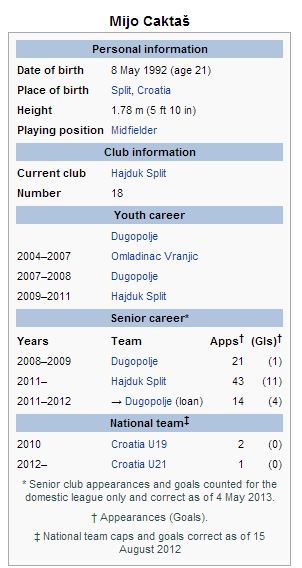 A native of Dugopolje, Mijo Caktaš started training with his hometown club NK Dugopolje, moving to the NK Omladinac Vranjic youth team when he was 14. After two seasons there he returned to Dugopolje, debuting for the senior team in the 2008–09 season of the Treća HNL South, at only 16 years old, he drew the attention of Hajduk Split scouts.

He was integrated in the Hajduk U19 team the following season. In summer 2011, he was sent to Dugopolje on loan, and his performances in the autumn Druga HNL leader earned him a call back to the Hajduk first team. In February 2012, he signed a four-and-a-half-year contract with the club. He made his debut for the first team in a 1–1 draw against Istra 1961 on 25 February 2012.The following month, he scored his first goal in Prva HNL in a 3–0 win against Rijeka and also provided two assists for Ante Vukušić.In the next game, he scored the only goal in a 1–0 victory over Cibalia. 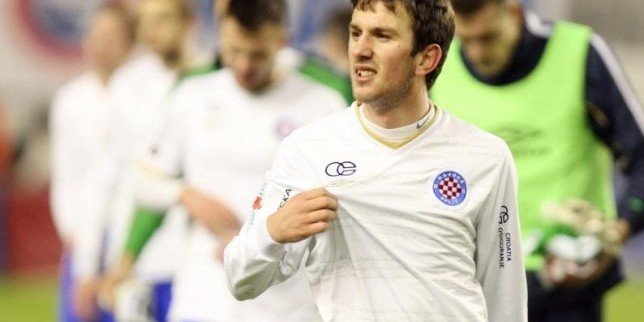 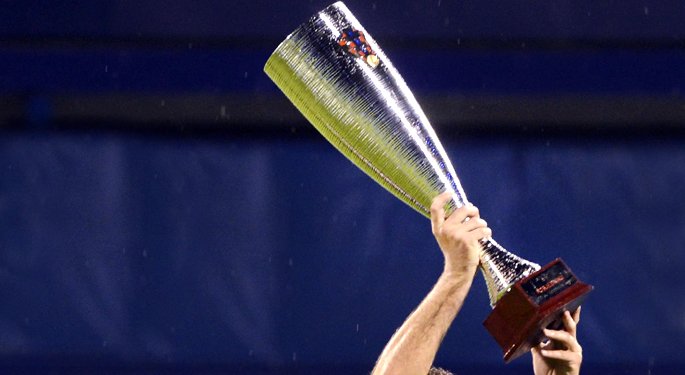 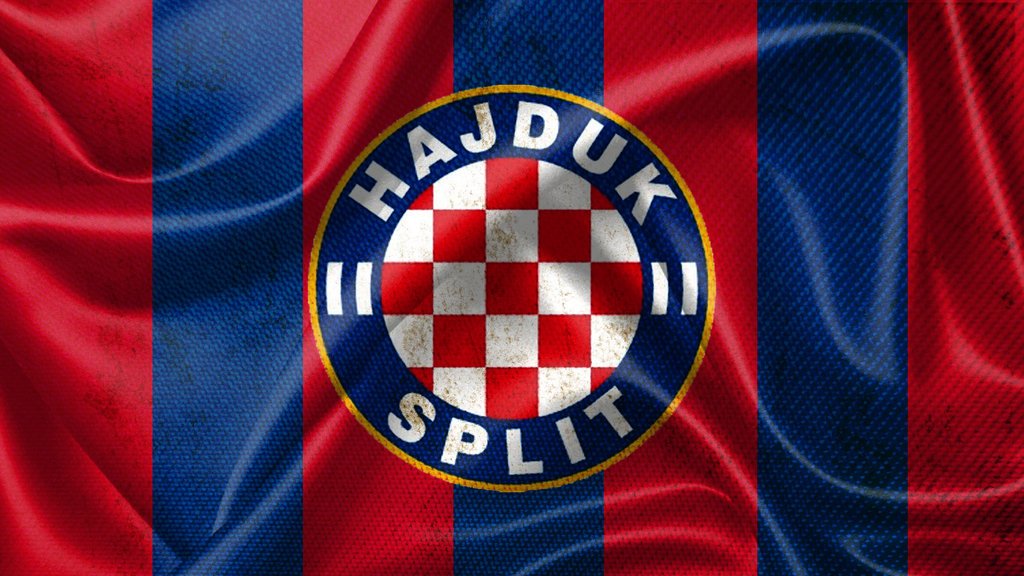 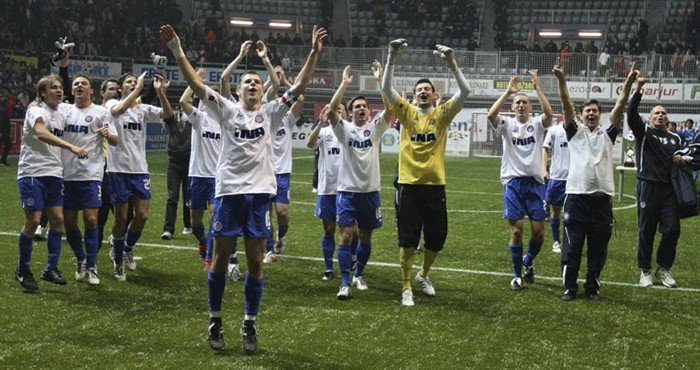 Dinamo Boss didn't get out of dressing room after the game so we cannot get to him to see reaction after biggest lose against eternal rival.
Login to Quote

Thnx. Rablador but from how much i seen first half, very hard... and i must attack. I have feeling tbendis will take this.
Login to Quote

Diazepamll
7 years • Edited
Yea, i think its time for me to get out of dress room and go to press conference. I am sure fans are hate me already
Login to Quote

tbendis
7 years
Ooohoohoo... I thought you were going to try to buy Čaktaš
Login to Quote

well, no, not considering that because i think that defence was the main reason why we lose. they were anxious from start, even when Soudani scored for 1:0 they were anxious after 1:1 its was mess in defense but Soudani and Fernandes was motivated but if no one cannot give them a ball they cannot score of course. Sammir didnt play good at all, he was bad in almost all situation. After second goal i was confused, i knowed that we must score but maybe i should stop and check solutions but i started to panic and shout players to hassle them knowing that my players are tired and i put pressure on Hajduk players and maybe years was deciding factor, also didnt expect from Tudor to put formation 5-3-1-2 with Kiš and Čaktaš for who i was thinking it will not play, was expecting Oremus who didnt played. After third goal i didnt see way out. I know that i must attack from start of next halftime but game was over, in 70 i mess with shouts again after starting attack, then Pivaric get injured, he will be out for 3 months and thats bad because whatever media and other says about previous matches players of Pivaric in all mathes showed his quality and assisted few times with crosses with runs from defense. So Thiago will take his place after FC Shirak, he is not registered in Q 1 leg. Petar Mamic will play that position before going to Poljud. Also i made wrong decision, Beciraj was tired before game but i didnt count, he does not need me against Shirak and he will need me against Hajduk. I am not sure how he feel not playing this one. So i think i am in problems, litle or much yet to be seen. But i must say that Hajduk played good, 4 goals to Dinamo in Supercup, not small thing.
Login to Quote

Thnx Wellsy, but i will need to cut details... its too much for me.
Login to Quote 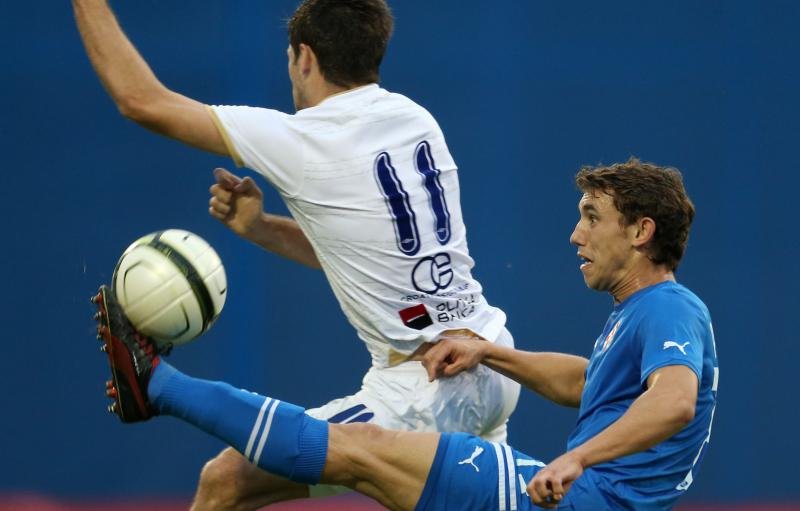 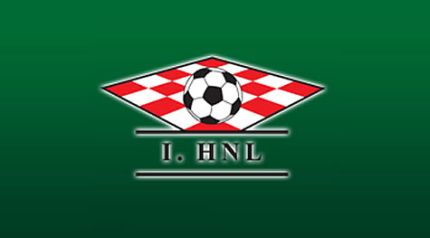 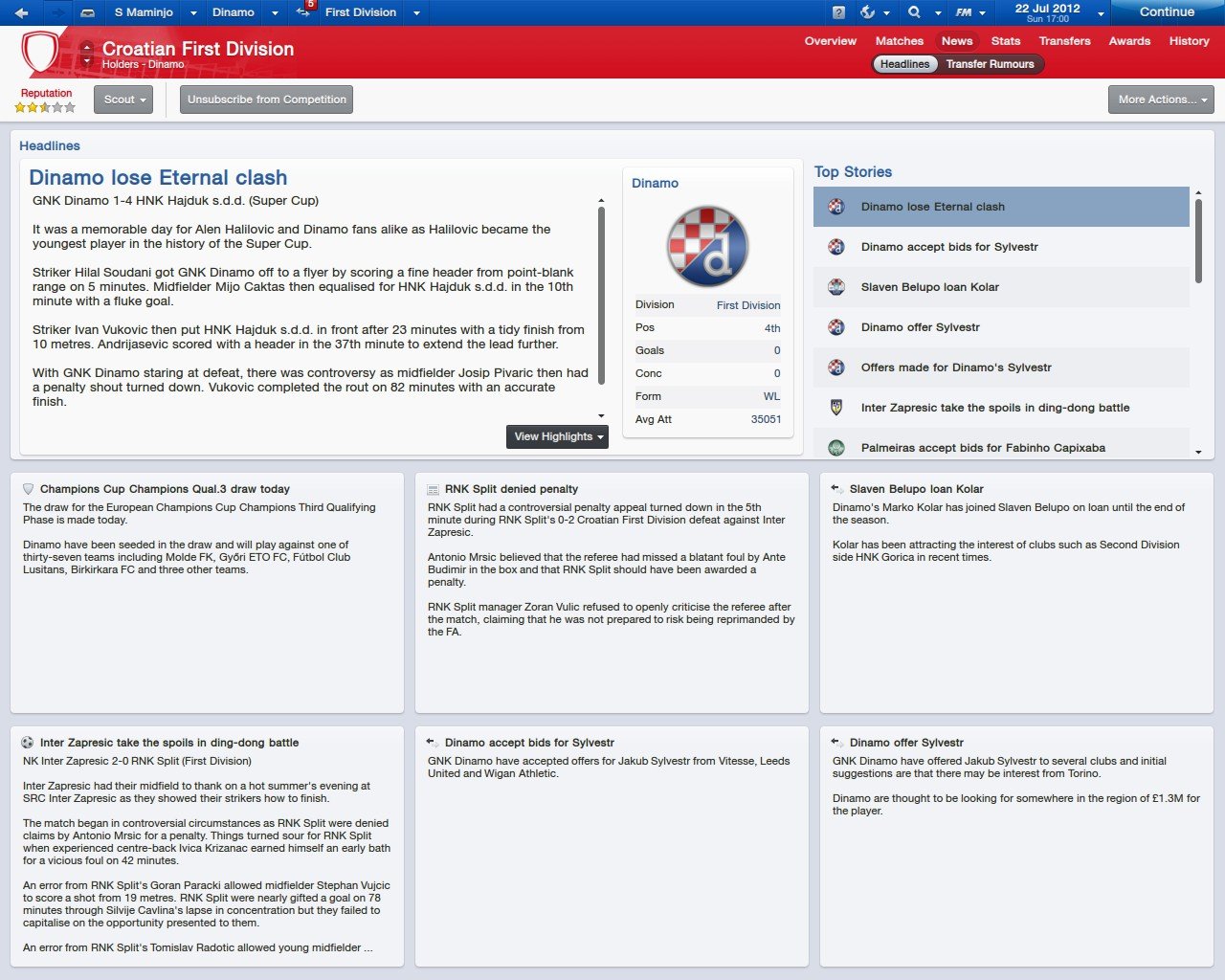 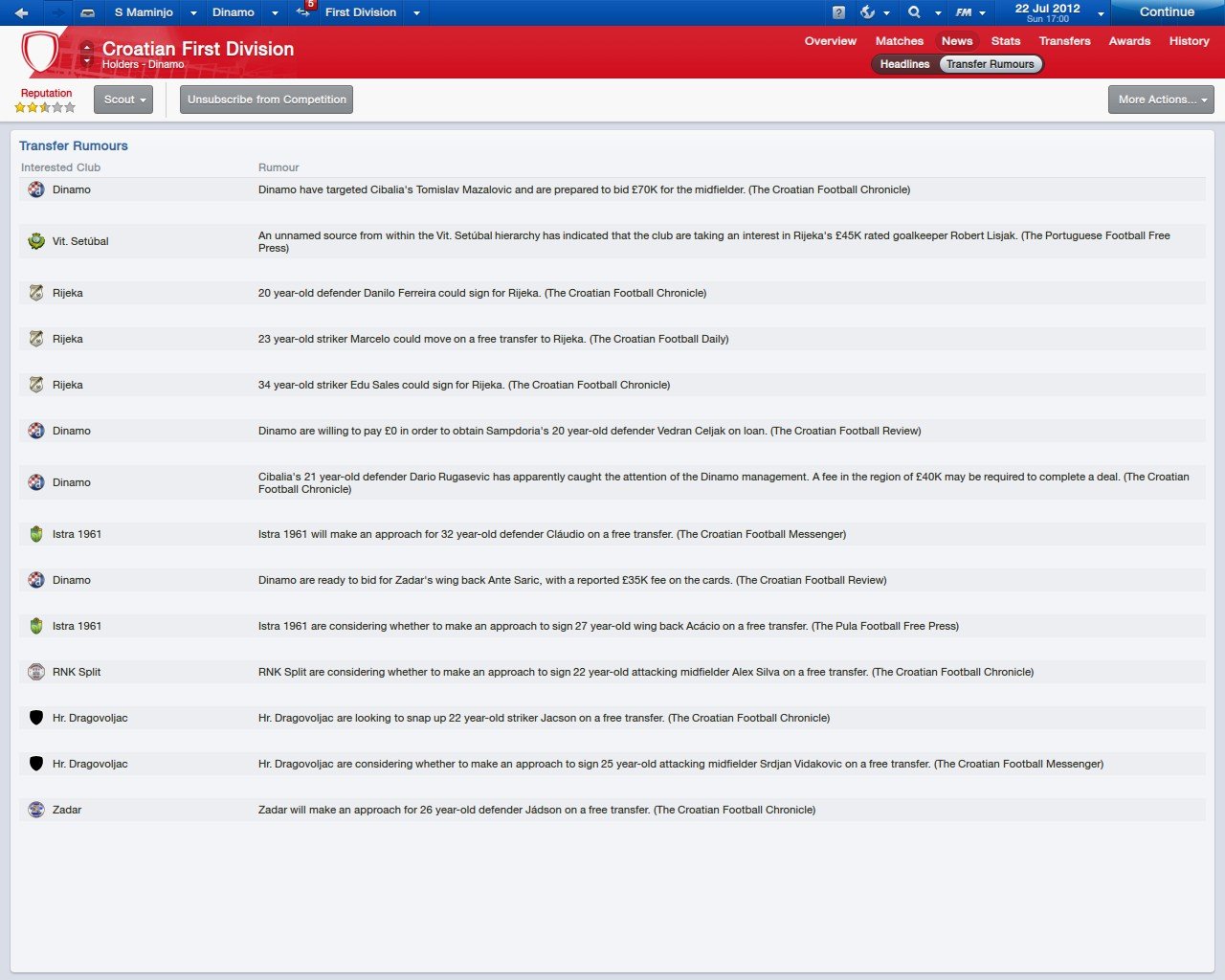 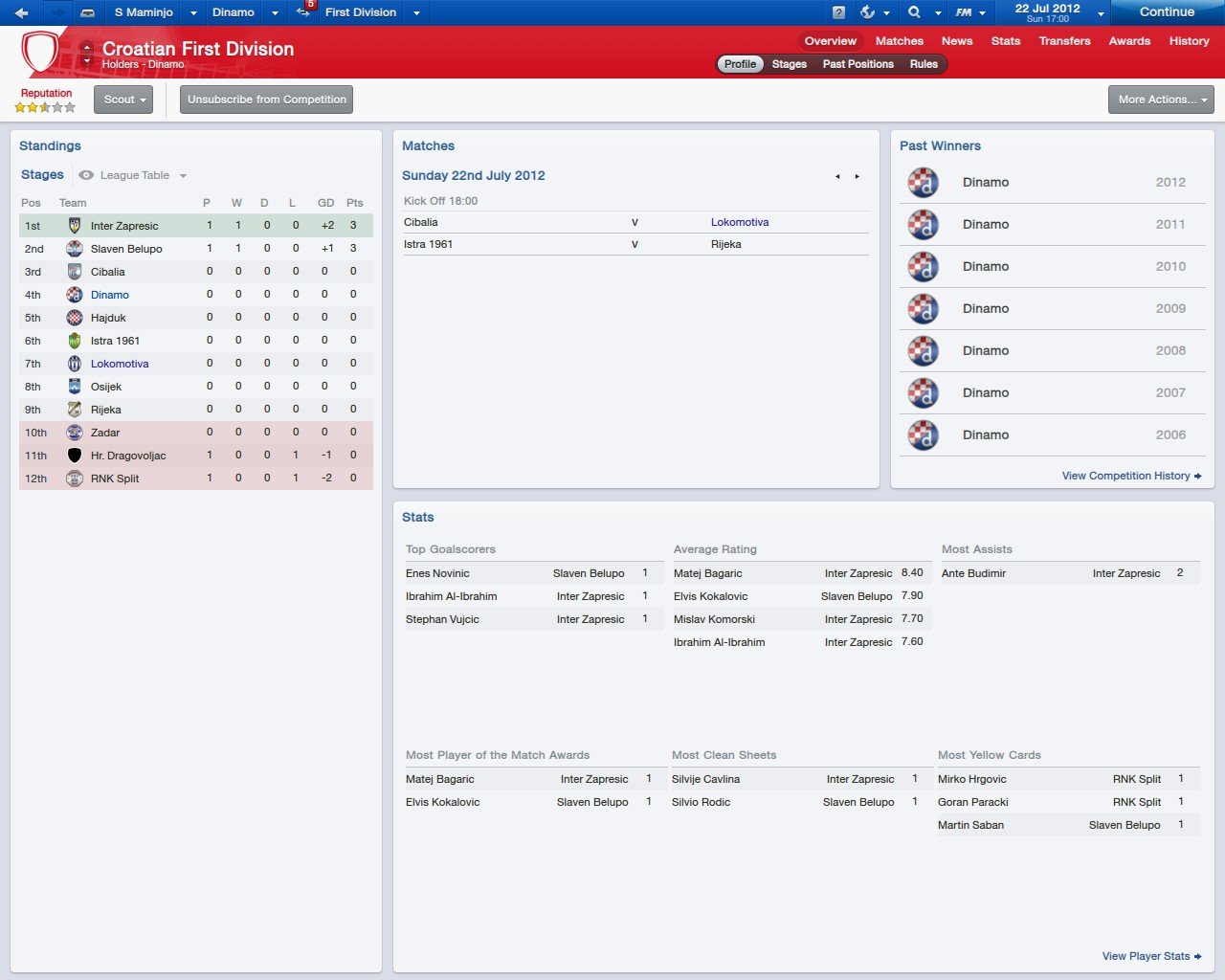 It's confirmed that Dinamo boss ended in hospital after losing supercup. He sayed that he does not know how much it will take for him to forget that. 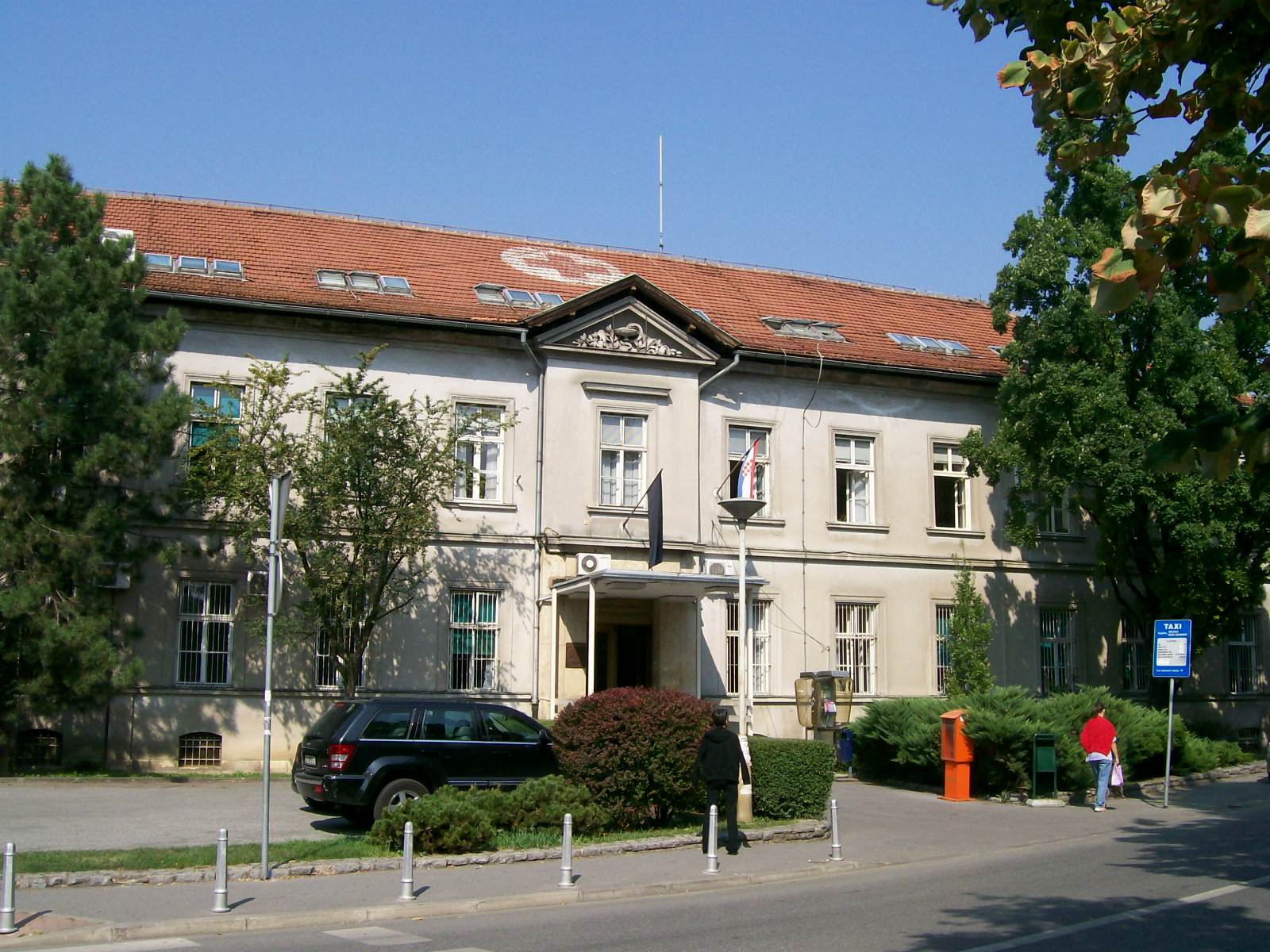 I am still very unhappy about Croatian Super Cup and i do not want to give any suggestion how we wil play first game in HNL1 competition against them. Any way board know what to do, we didnt change much, we train and looking forward. I apologize to all fans for not taken'g Super Cup and i will do anything to get it back if i will be here or somewhere else. Its my fault and i will hard live with it my entire life.