Verdinho
9 years
Good start, but I will say I expect domination because Bayern are far superior to most in the league
Login to Quote

Seni
9 years
I really like this story!
1
Login to Quote


Thanks mate glad to know you are enjoying it 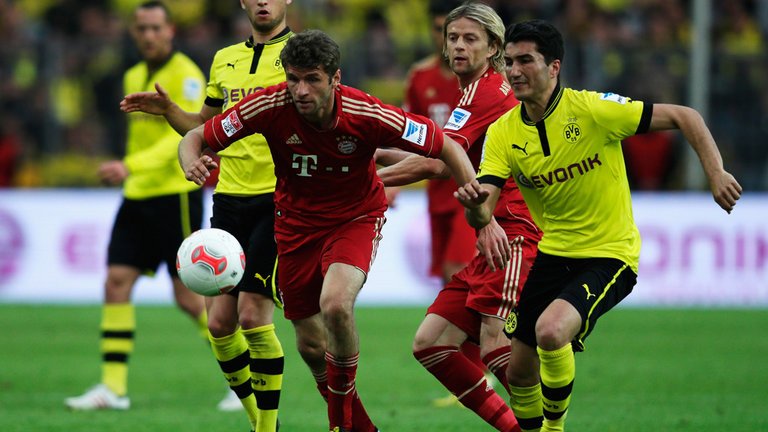 We have started well this month but we also slumped to shock defeats towards the end of the month. 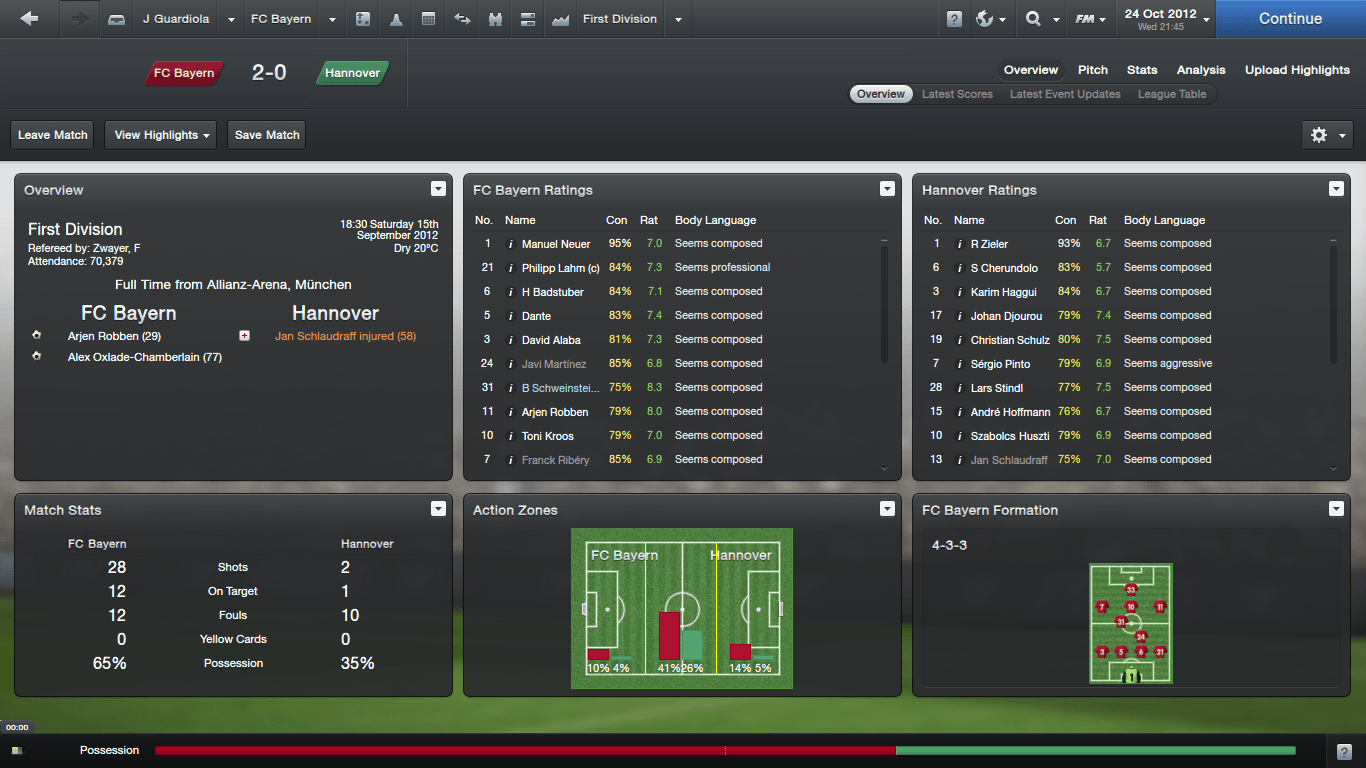 PEP’S NOTES: Another good win against a team that will be in the European places come the end of the season. We dominated the game again with 65% of the possession and that is what I like to see especially against weaker teams. Oxlade-Chamberlain got his first goal for the club and it was a great one as he ran from inside his own half to slot a powerful shot at the inside post. 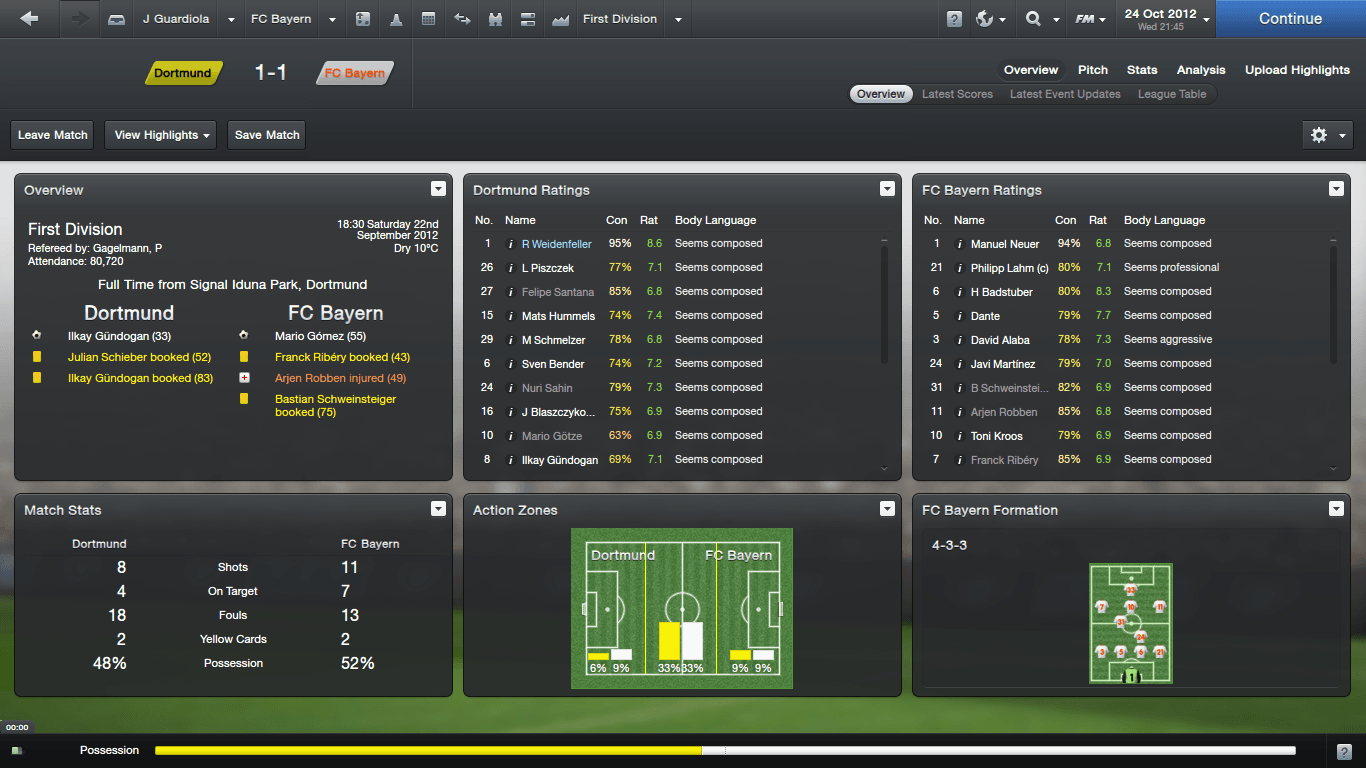 PEP’S NOTES: What a game. This was a great show but on by two great German clubs. We did the Bundesliga proud. An excellent end to end game that finished all square. I was happy to take the point due to Dortmund really going for it in the closing stages of the game. Mario Gomez scored a peach of a goal to bring a point back to Munich. 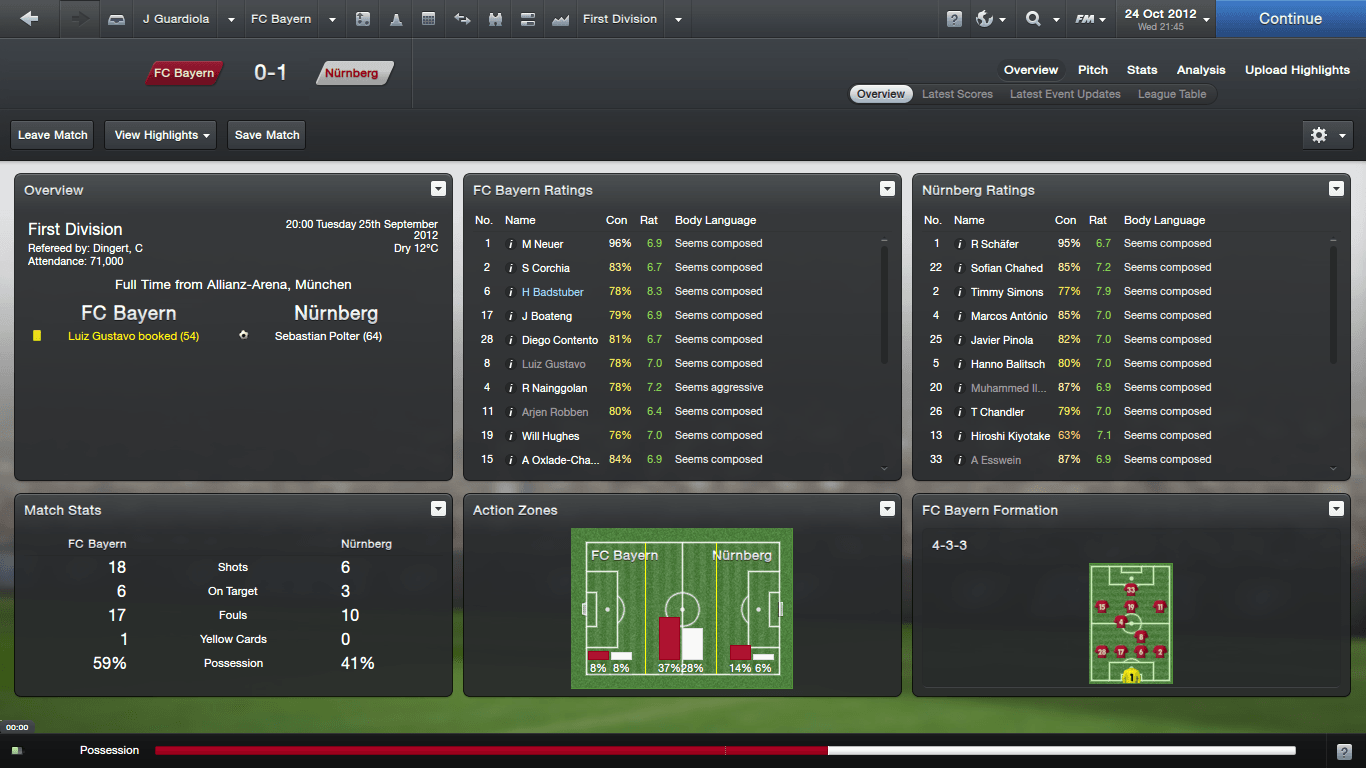 PEP’S NOTES: Nein nein nein nein. We dominated the game but we just could not put the ball into the net. I did play a weaker team so that did play a part in the result but we still should be beating teams like this. I am very disappointed we had to suffer a defeat at home but we must press on now and recover well from this. 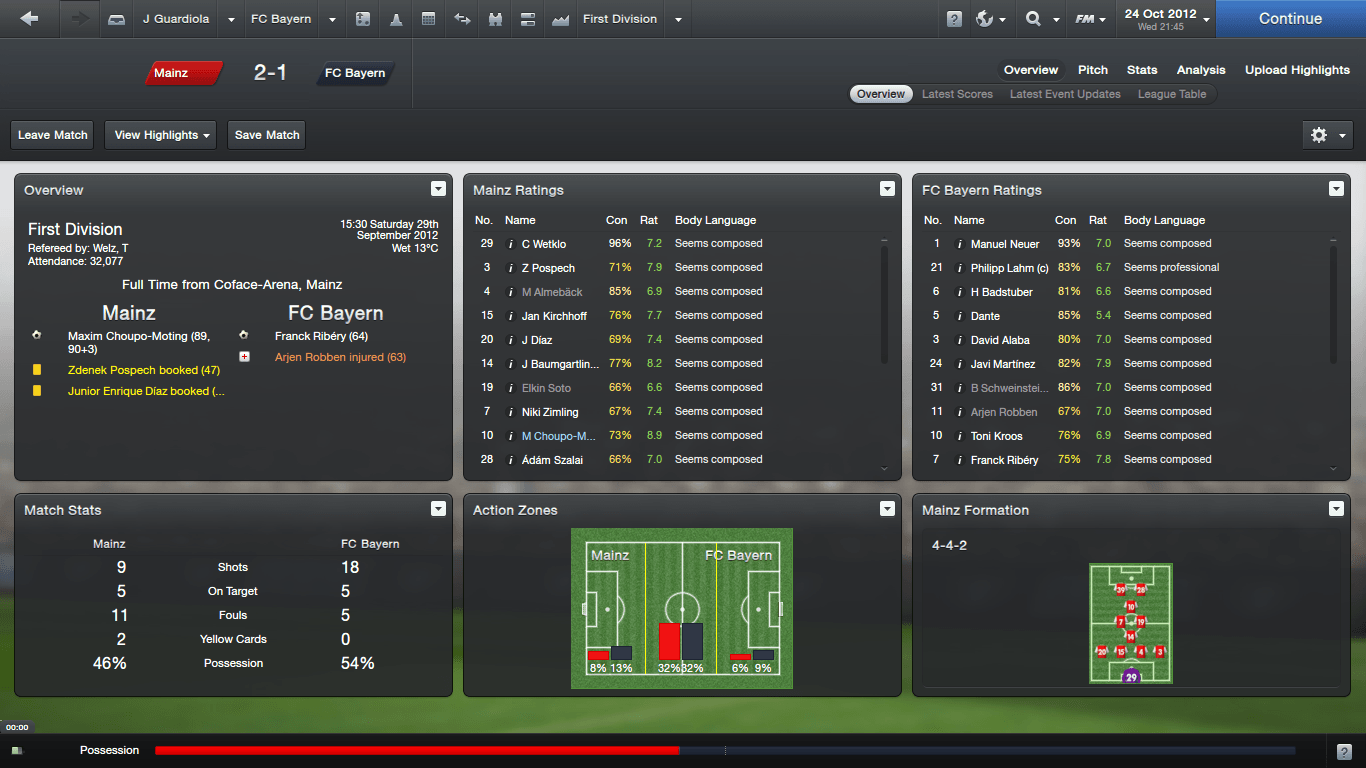 PEP’S NOTES: This was one of them games you knew they were going to comeback. We got our goal which was tough to get so I told the boys to sit back and hit them on the counter. The scored in the 89th minute and then again in injury time and there was no time left to recover. I must hand it to them though as they played excellent and never gave in at all. 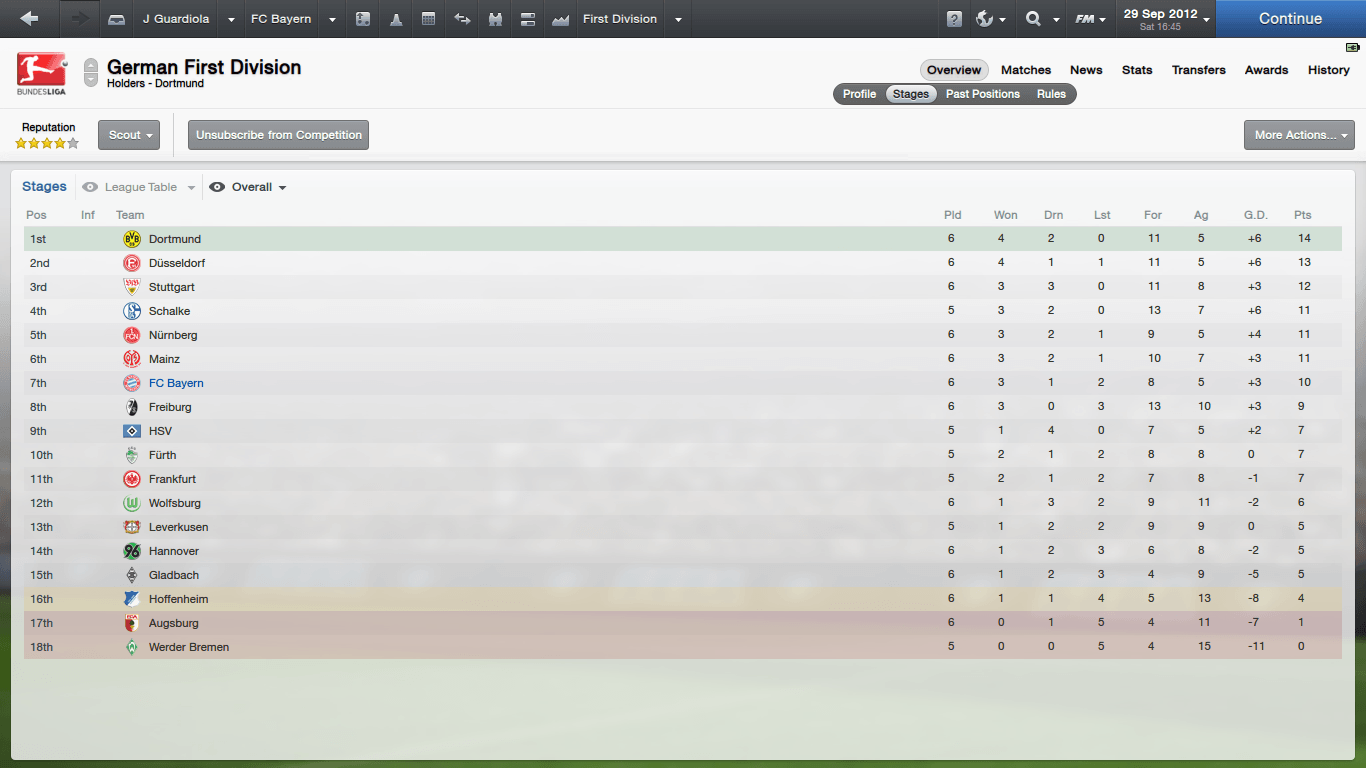 The position looks bad but we are not that far off the top. All we need to do is recover well and we will be right back up there within no time. 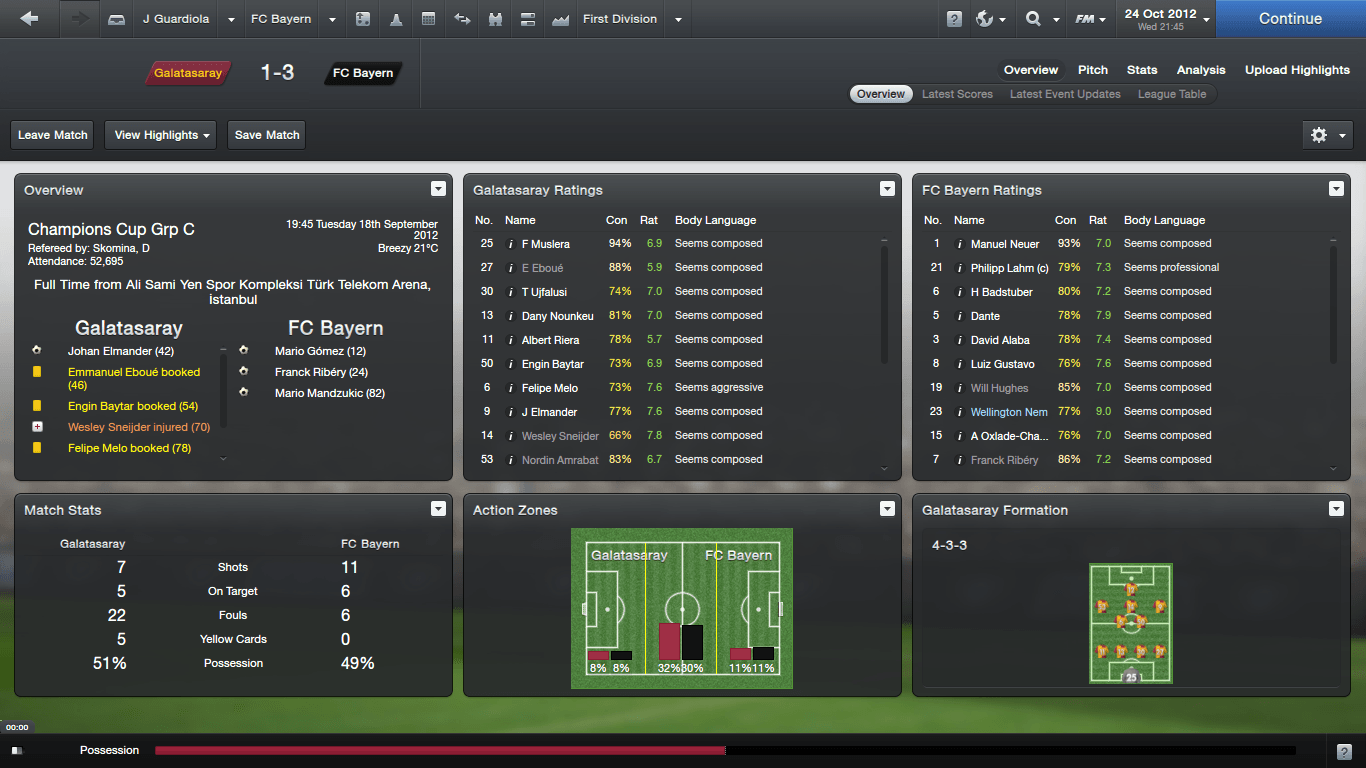 PEP’S NOTES: A great start to our European campaign and this is a competition I want to do well in this season. This game was always going to be tough so to come away with a 3-1 win is a great result for the boys. 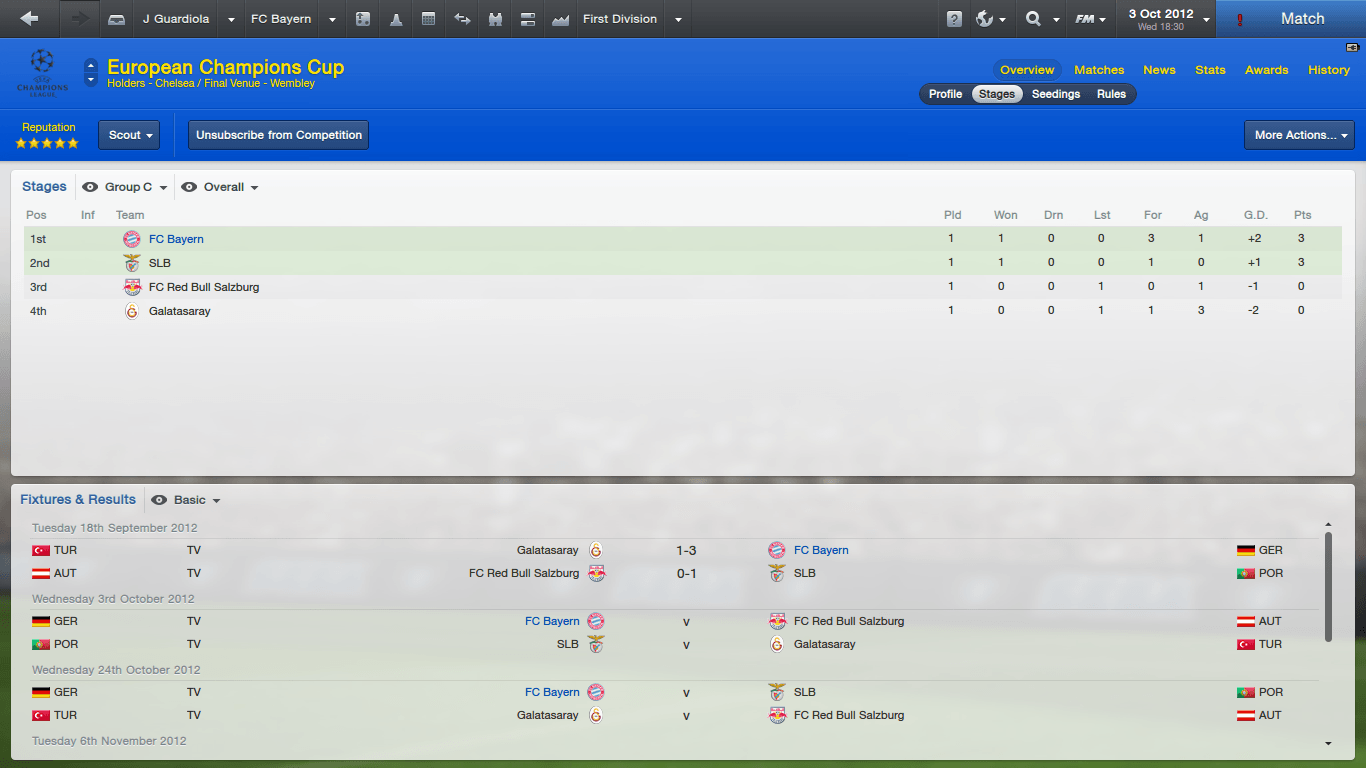 We sit top of the Group and I intend to stay there all the way thought the Group stages. 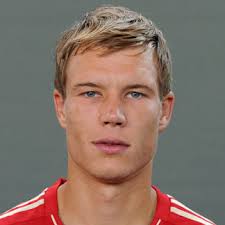 Holger Badstuber has been excellent all month. He has dominated in the air but he has also pushed forward to help the attack out which I am very pleased about.
Login to Quote 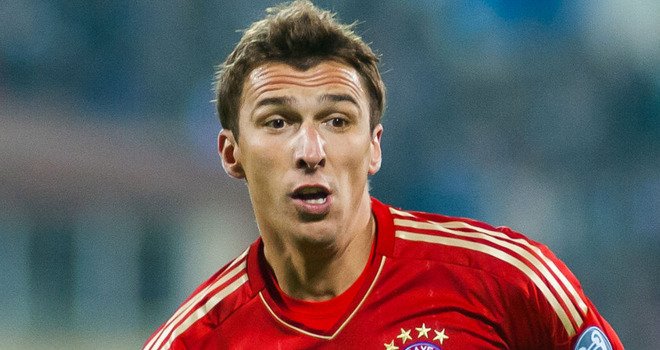 Mario Mandzukic has hit out at manager Pep Guardiola for being ‘Unfair’. The Bayern Munich striker admitted that there is a rift between the pair of them and that they don’t get along well. He also said that he feels he is unwanted at the club due to him not fitting into Gaurdiola’s playing stlye.

“I have been treated badly”, said the Croatian. “It is unfair. Mario Gomez gets to play week in week out but I am not even allowed to be in the team. It is not right. He (Pep) feels that he can just leave me out of the team to rot on the bench and ruin my career”.

“He told me that I had to adapt to his style of play and that I had to play his way. I play with my soul not how anyone else wants me to play. He does not speak to me, he does not want to play me and all of the team are on his side and not mine”.

Pep Guardiola has always been known to have special relationships with his players and he was astounded by the outburst from his striker.

“It is all lies. I treat him fairly. Every player has to adapt to new styles when a new manager comes in and the rest have the team have. He is not special. He has to adapt like everyone else and he need to stop sulking and do something about it. Mario Gomez is on fire right now I can’t just take him out of the team, that would be a stupid decision”.

“He needs to grow up”, added the Spaniard. “He needs to stop acting like a baby and prove to me why he should start and stop complaining to the media about this. All of my players will back me and they all know I have given him a fair chance so if he wants to be like this and moan then so be it”.

This might signal the end for Mandzukic’s Bayern career even though he has only been at the club for less than 6 months.
Login to Quote

Nathaniel
9 years
Nice update, you have to sell him!!
1
Login to Quote

Joe
9 years
Great update, but surely you have to sell him
Login to Quote


Cheers mate. I think his time is done here and I am looking for a new striker already