Nathaniel
9 years
Nice Update, need to sell the guy just not to Dortmund

PS Is it just my chat that has vanished?!
Login to Quote

PS Is it just my chat that has vanished?!


Cheers mate my chat has gon too

Seni
9 years
Very nice updates and a quality story you have here, keep it up! 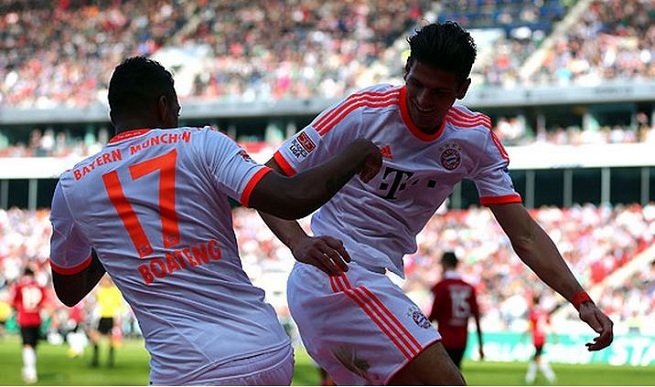 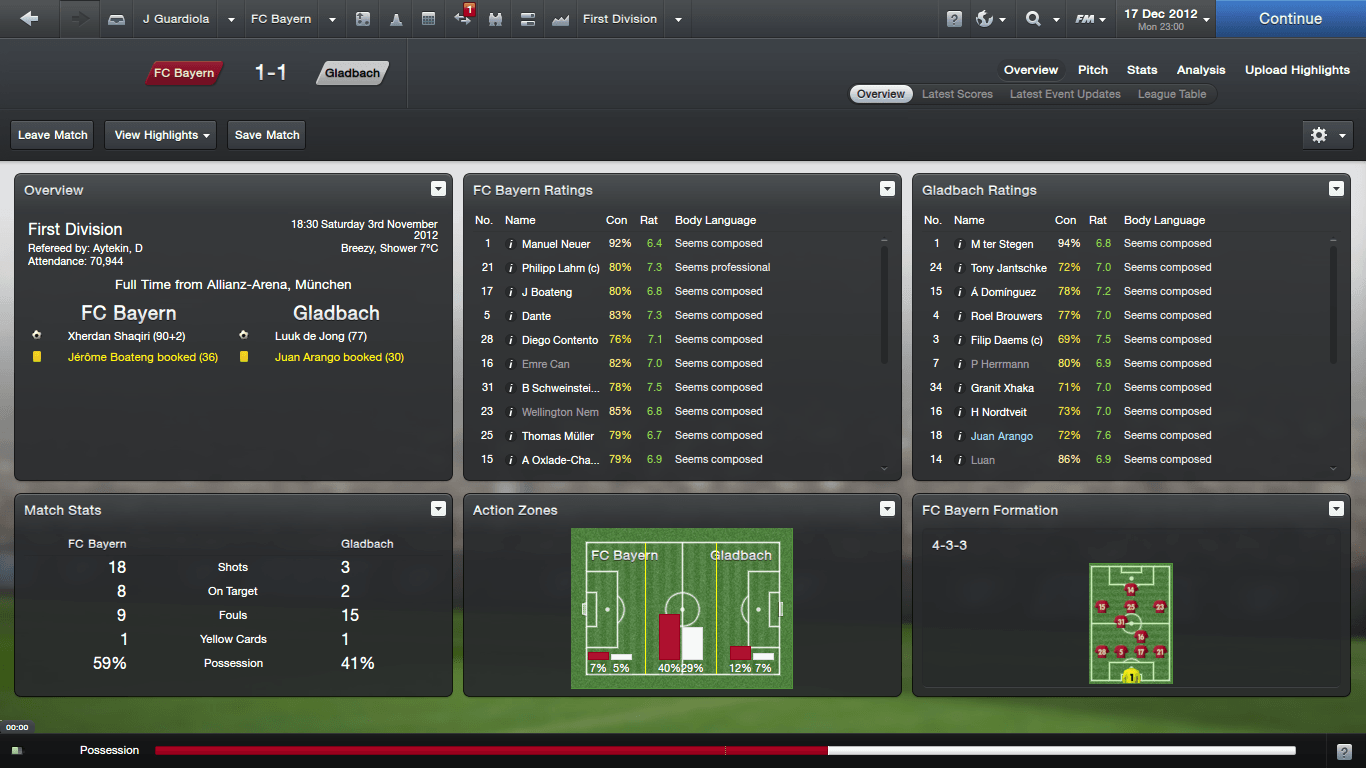 PEP’S NOTES: Well a very disappointing game. We are dominating teams but we just can’t seem to break some teams down and that leads to them scoring. We eventually found the equalizer with Shaqiri scoring from a tight angle in the 92nd minute. It is another point for us but we need to be winning games if we are to win back the title from Dortmund. 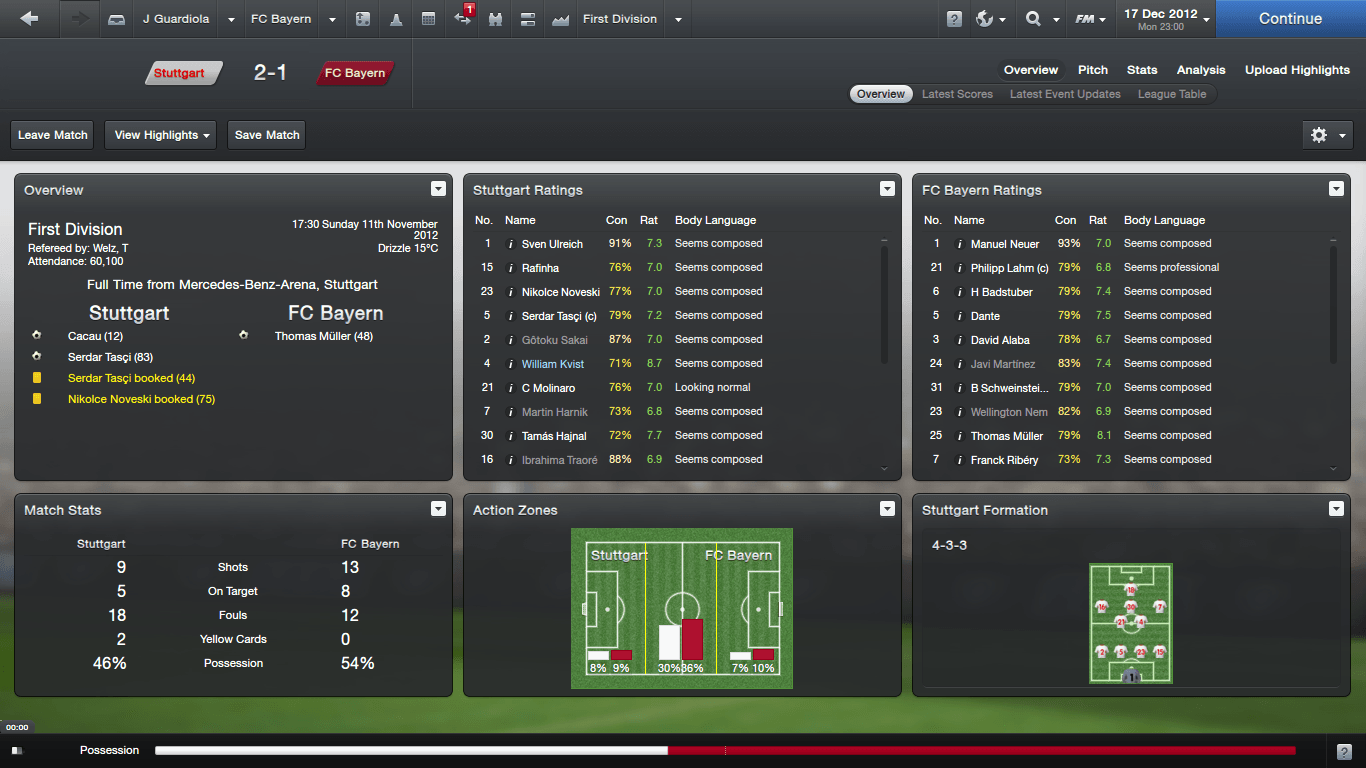 PEP’S NOTES: I am very disappointed with this result. We knew we had to beat them and to lose like this is not good enough. Again we are dominating teams but not putting the ball in the back of the net often enough. We are almost there with the perfect formula for a winning team but now we just need to be consistent. 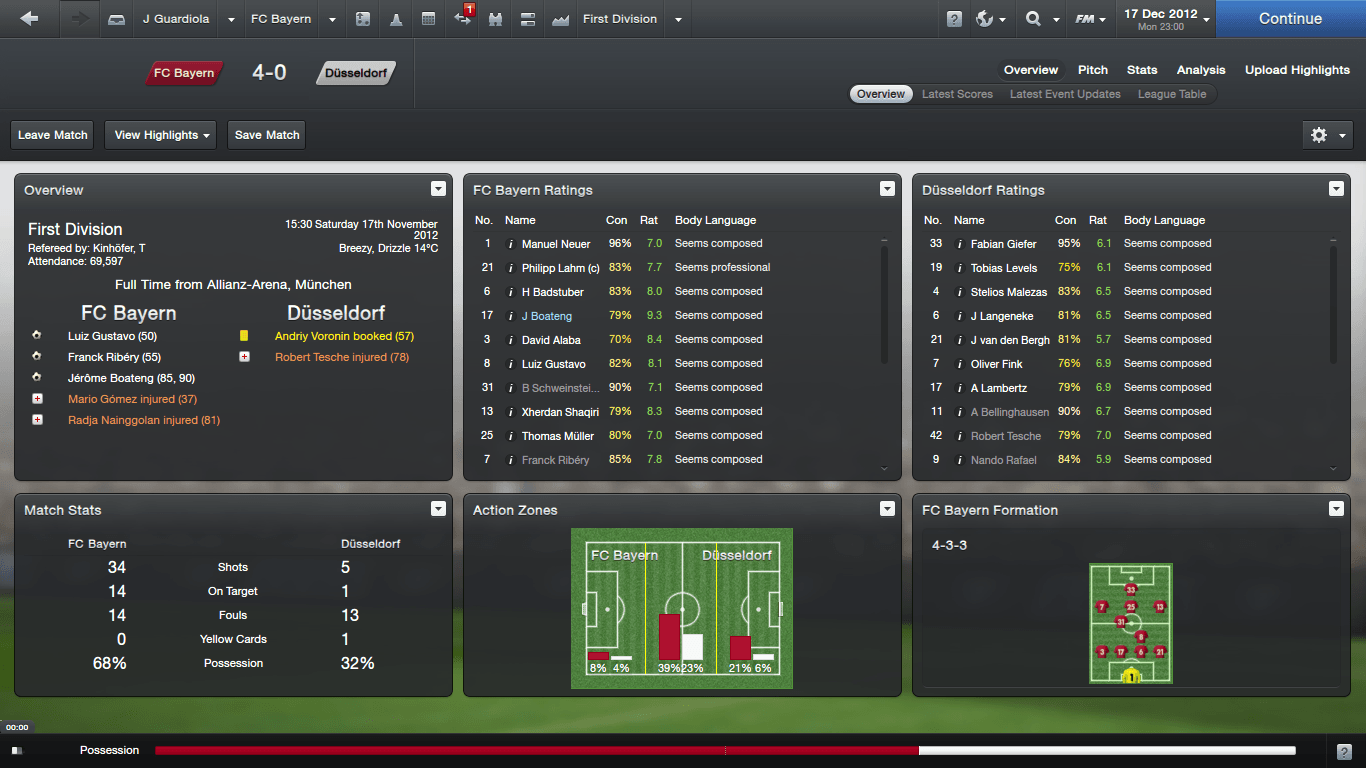 PEP’S NOTES: Yes this is more like it. What a game. We were excellent and we deserve this big win after a tough few games in the league and in Europe. We just never sat back here we just kept on going and we made sure we truly gave them an absolute thrashing. Boateng was excellent as he grabbed 2 late goals from Shaqiri free kicks. 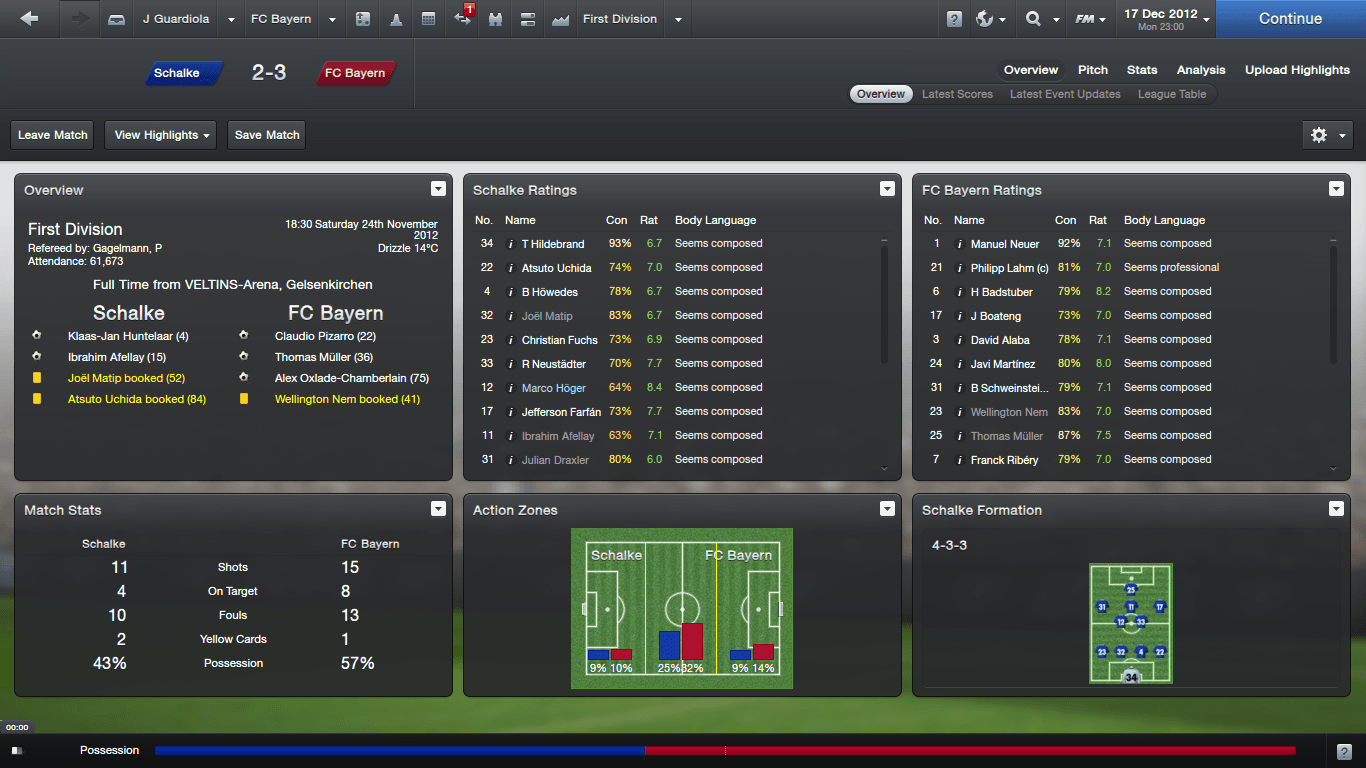 PEP’S NOTES: What a game. We went 2-0 down early on in a game we had to win and we eventually came back to win the game 3-2. Pizzaro got the comeback going and then Muller equalized. I had to change it up so I brought on Oxlade-Chamberlain who has settled well to German football and he banged in the winner late on in the game to bring us closer to Dortmund. 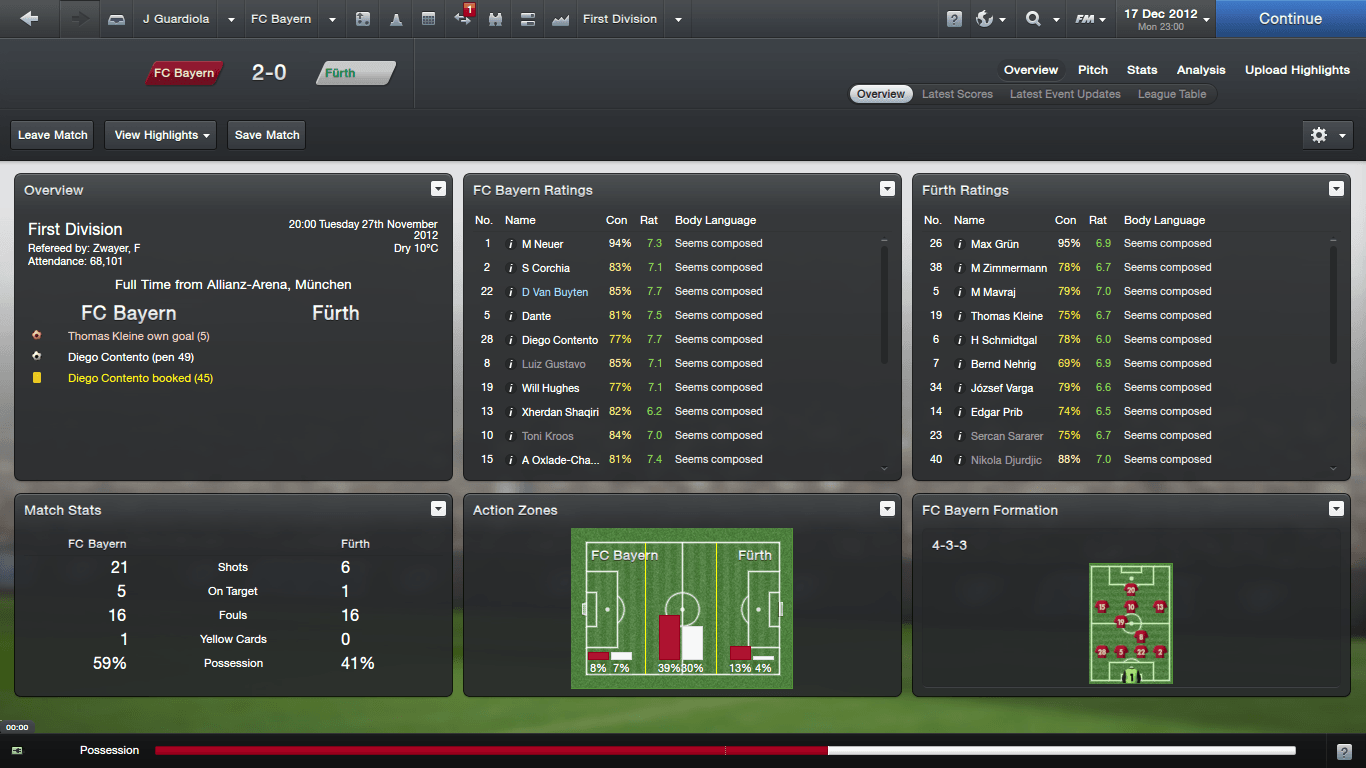 PEP’S NOTES: A good win for us to continue our winning run. I played a very young and weak team and we won comfortably which shows the quality in depth we have at the club. 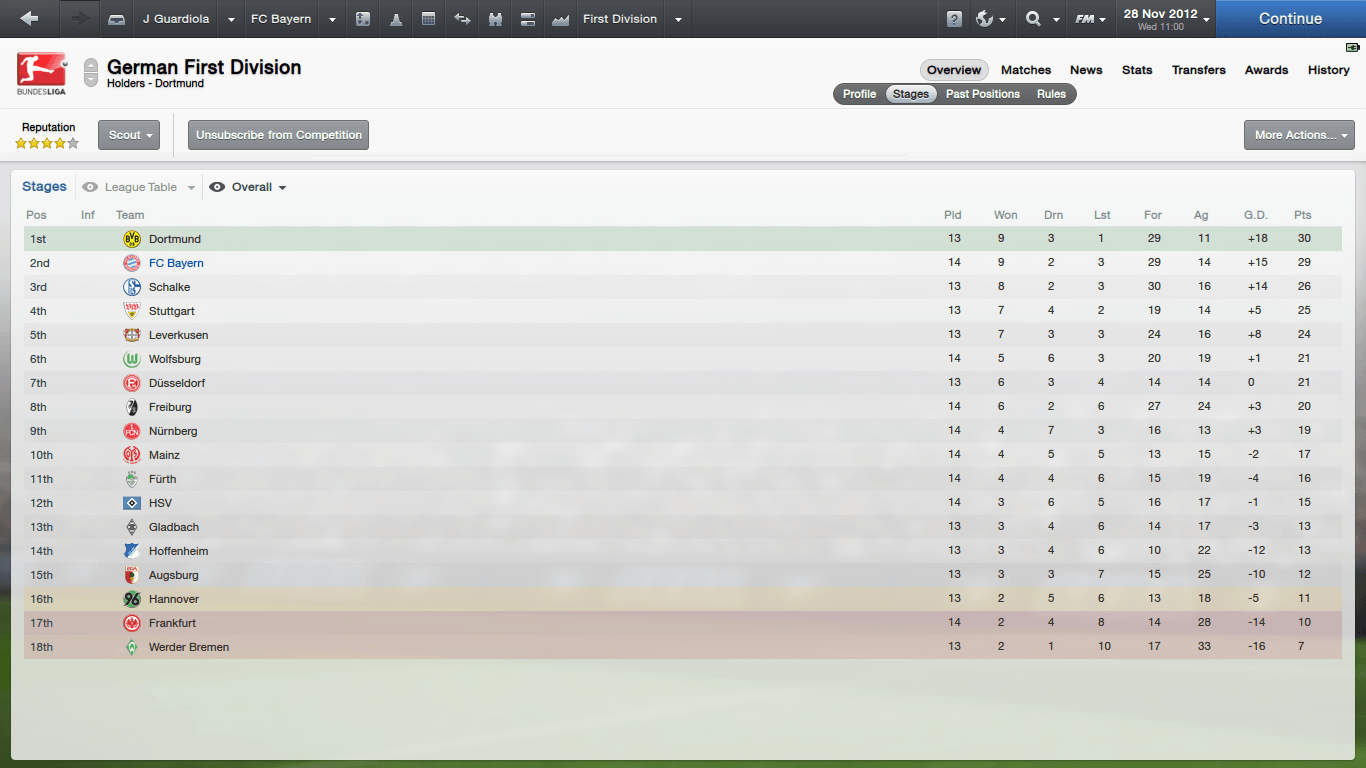 We are ready to pounce and overtake Dortmund but we need them to slip up somewhere for us to do that. 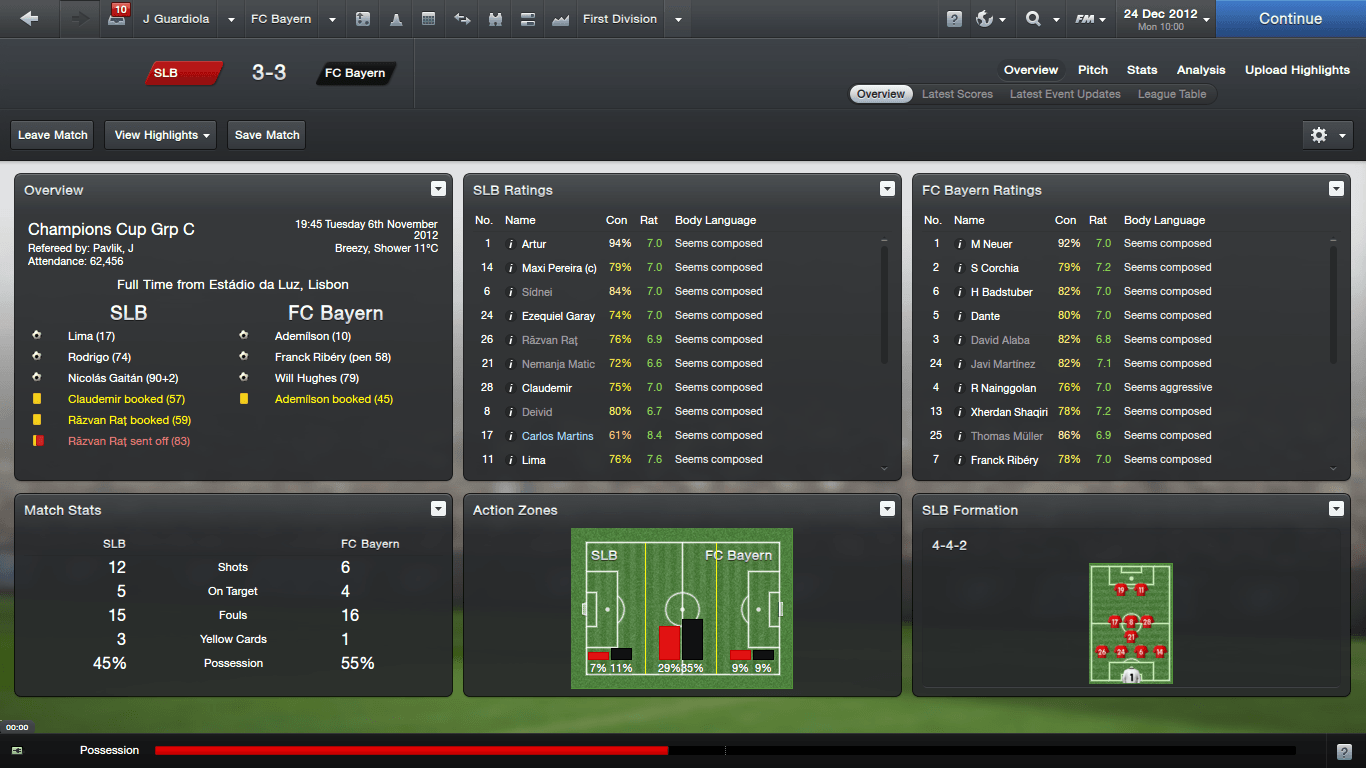 PEP’S NOTES: This result secured our place in the last 16 of the Champions League. I fielded a weaker team and well this is what makes this tournament so special. A great game and both teams enjoyed it and it and it was great experience for the younger players and it was nice to see Will get on the score sheet. 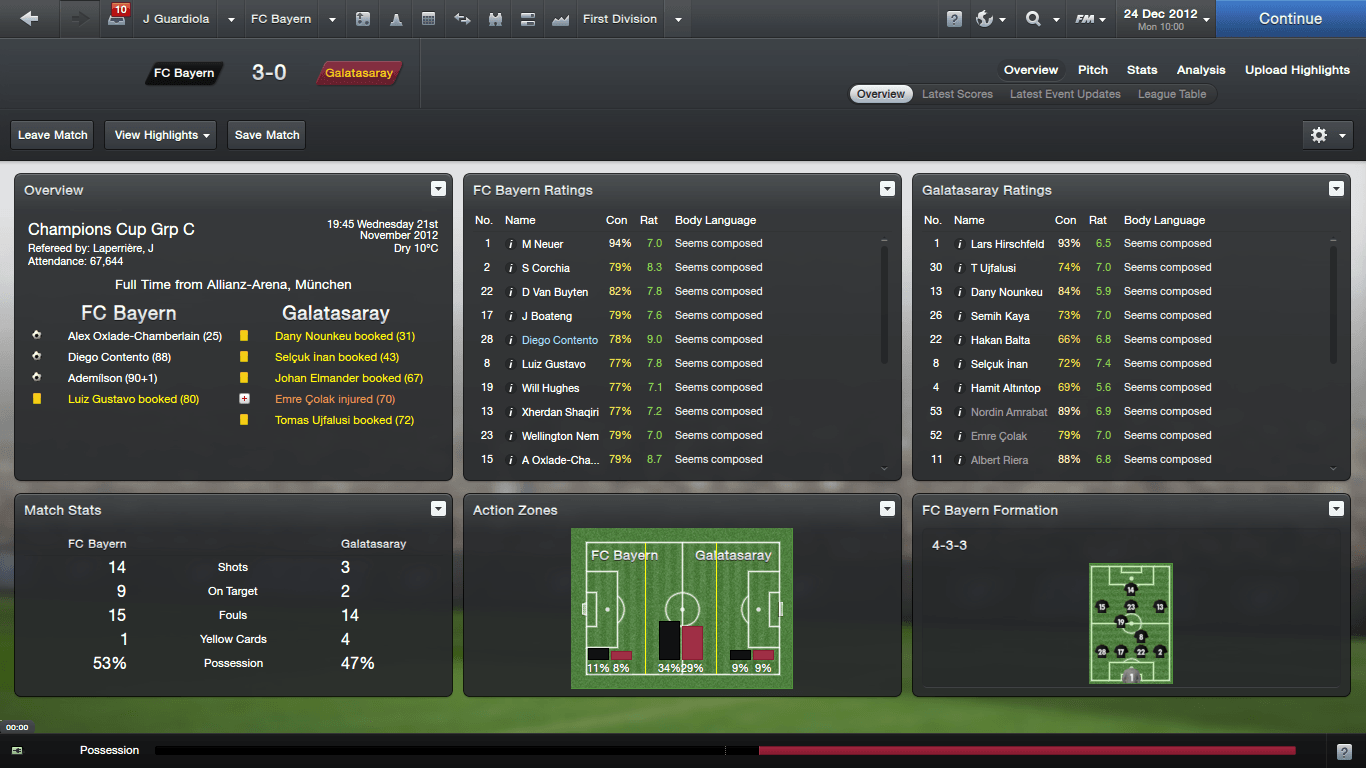 PEP’S NOTES: A very similar game to the last as I fielded some young players just to give them experience. It was a great game and we deserved the 3 points that we got from it. I am very happy that I know my 2nd team (which is my young team) can perform in such important occasions. 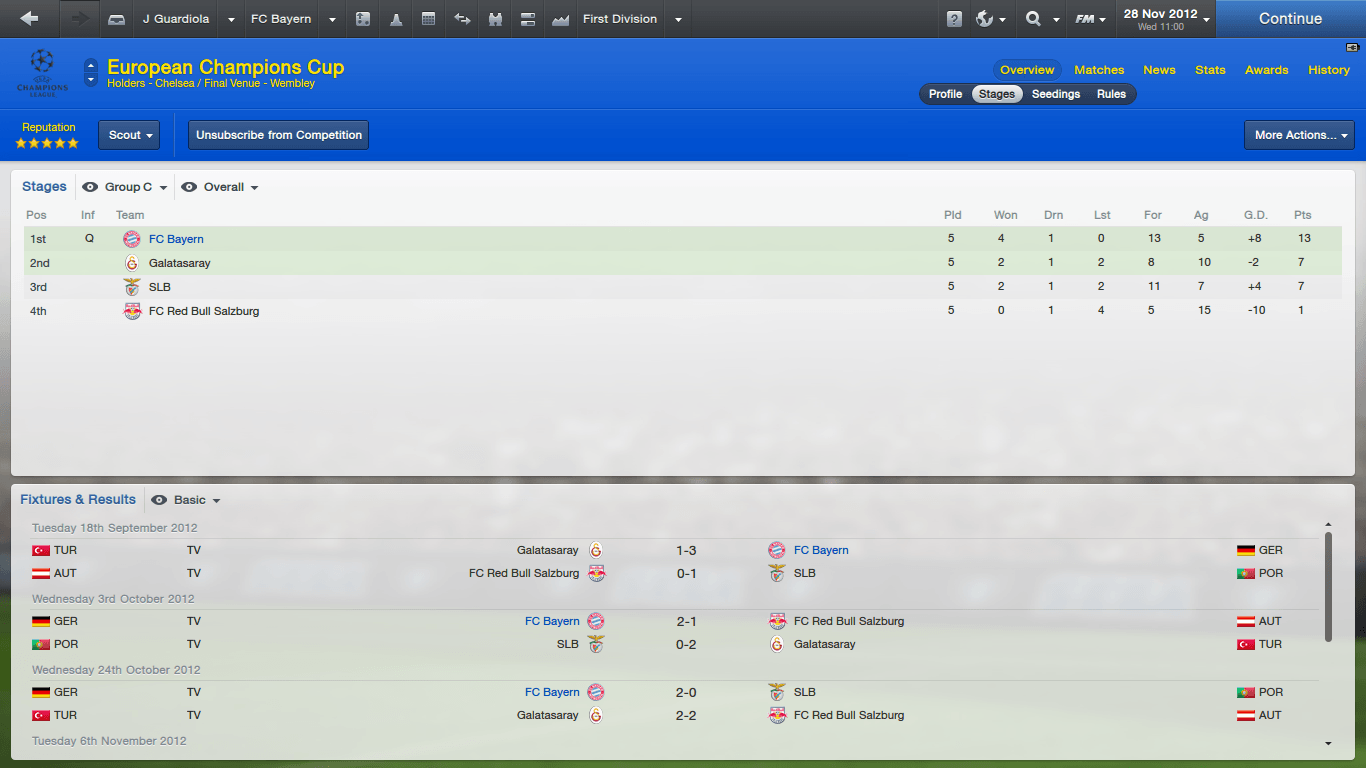 We were the first team in the tournament to qualify for the last 16 and I am very happy with how the group went so we need to focus on the league for the next 2 months before the Champions League starts back up again. 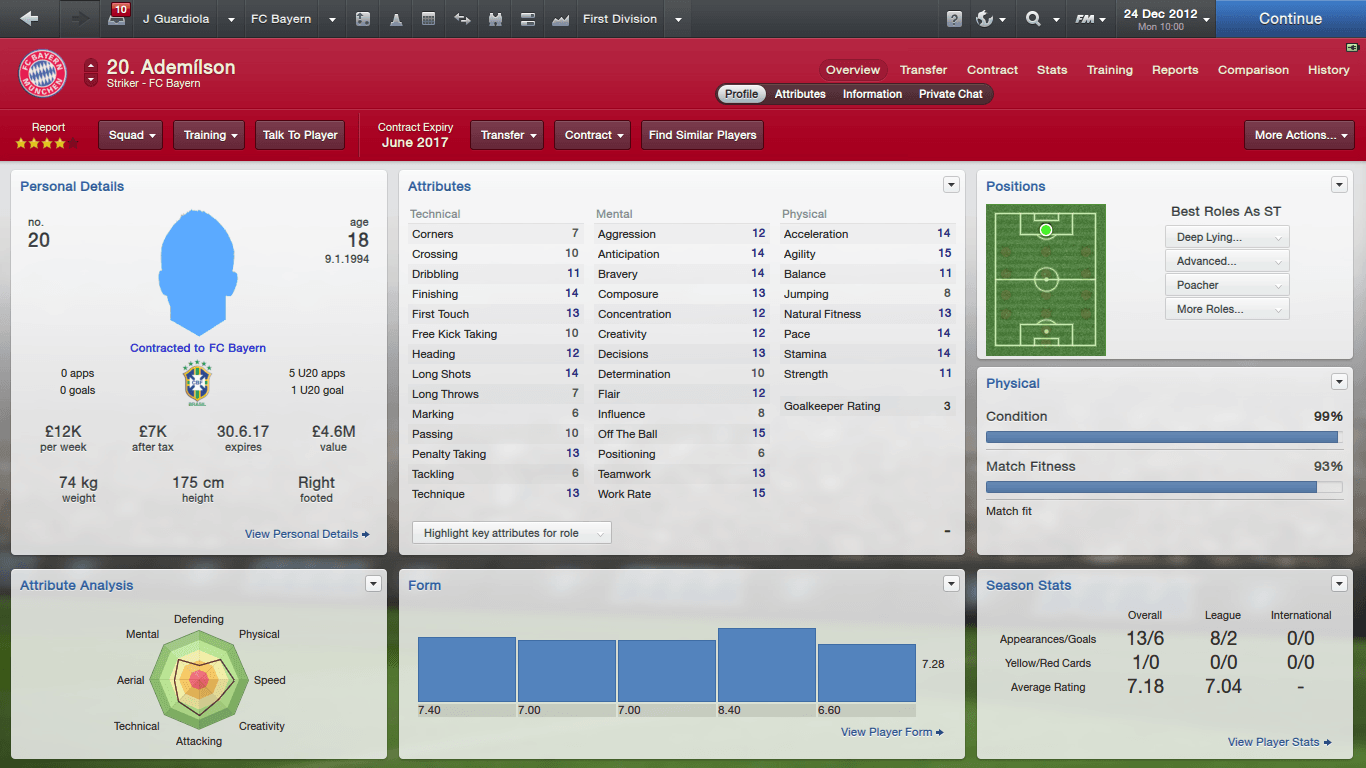 This kid has been very impressive for me this month and this season. He has settled well and has scored 6 goals this season. I am considering loaning him out during the second half of the season due to the possibility of a new striker coming in so he can gain more experience.
Login to Quote

Cheers mate your in for a treat next month

Seni
9 years
Nice, you need to catch up with Dortmund!
1
Login to Quote


Cheers mate I have them in my sights
Login to Quote

DeanByrne1995
9 years
Just began reading the story and loving it! Stick with it and you may have one of the stories of the site in time.
1
Login to Quote


Cheers mate. That means a lot hopefully we can break our SOTM virginity's together lol

AlexTHFC
9 years
I wanna lose my virginity! SOTM, that is...

HAHA Dont we all

Jack
9 years
Some great results and you romped through the group stage! Well done!
1
Login to Quote 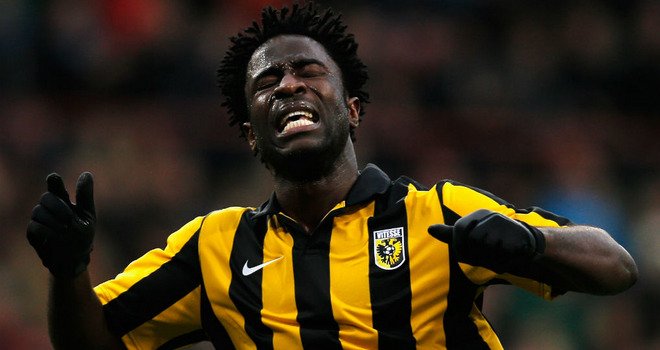 Bayern Munic have completed the signings of Wilfred Bony and Jelle Vossen. Bony joins from Vitesse on a deal worth £8M and Vossen joins from Genk for a fee of £8.25M. The two strikers will join up with their new squad when the transfer window opens in January.

Wilfred Bony spoke to press earlier and said that he was delighted to be given the opportunity to prove himself at a top club.

“It is a great feeling to sign for a big club like Bayern. I am very happy to be here and I feel that I can now prove myself that I can be a great player. I owe a lot to Vitesse and it is a sad feeling to leave Holland but I will always remember what they did for me and how they helped my career develop. I am also looking forward to working with Pep Guardiola who is a fantastic manager. He told me that I will be in the team and that I will get my opportunity to play in the Bundesliga. I feel this is the right move for me and I will be able to be a success at Bayern”.

Jells Vossen joins from Genk after a great start to the season In Belgum scoring 8 goals in the league. Vossen is a highly rated player at home and is also looking forward to proving himself in Germany.

“It is a big surprise for me. I was not expecting Bayern to sign me. They made a bid in July but they pulled out at the last minute. I am happy to be here. I know I won’t be 1st choice but I want to be able to help the team when I play. It means a lot to me that Bayern came in for me and that they want me to play for them”.

This then signals the inevitable departure of Mario Mandzukic with teams such as Real Madrid, Stoke and PSG interested in the striker.

Manager Pep Guardiola has also announced that Claudio Pizzaro will not be offered a new contract at the end of the season.

“Claudio is a great striker and he has served the club well in his two spells here. We feel it will be best for him that he plays more football so he can prolong his career. We wish him the best in the future and he will always be in the hearts of Bayern fans”.

“Ademilson will also most likely be sent on loan. I will be looking for a team in Germany that will be willing to take him on loan for the rest of the season”.

Many fans are happy with the deals but are upset to find out that Wilfred Bony will be heading to the AFCON on the 19th of January which is the same day Bayern play Leverkusen when the Bundesliga re-starts after the winter break. 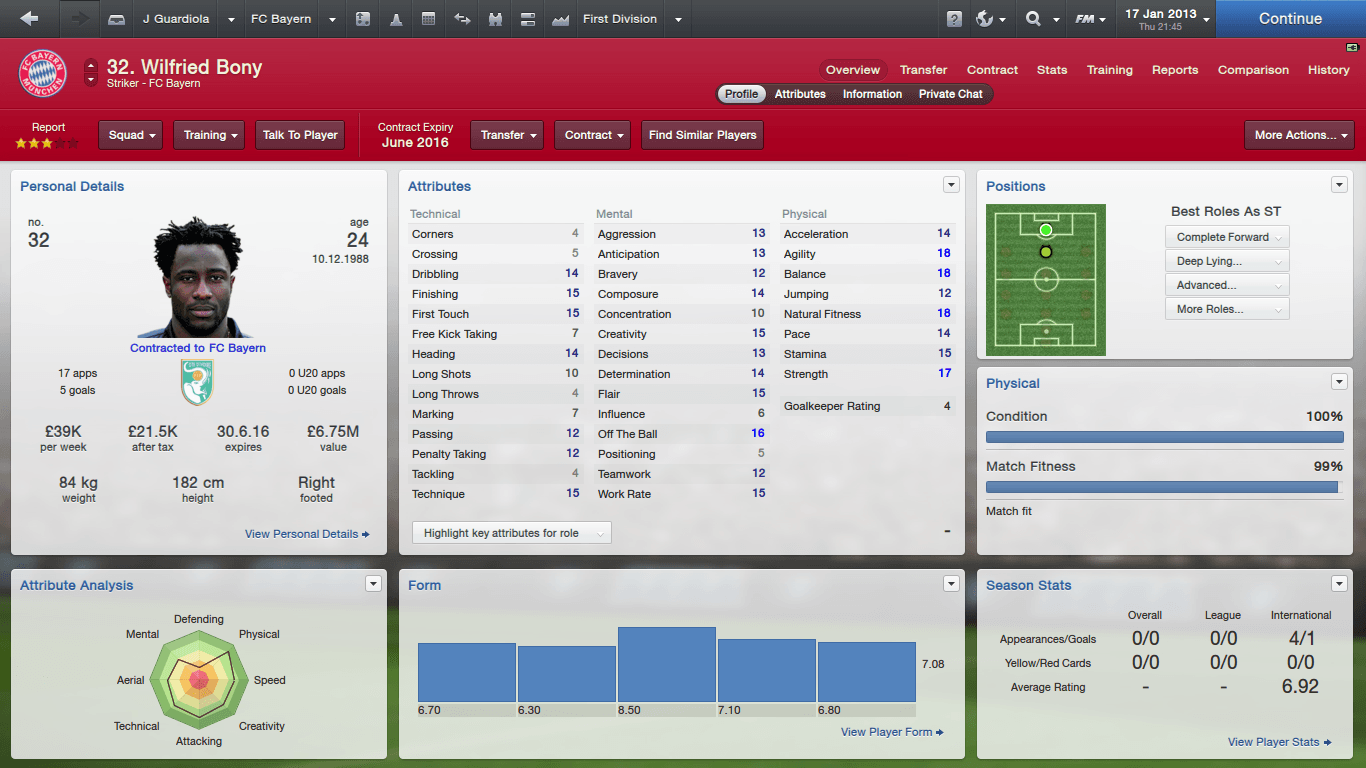 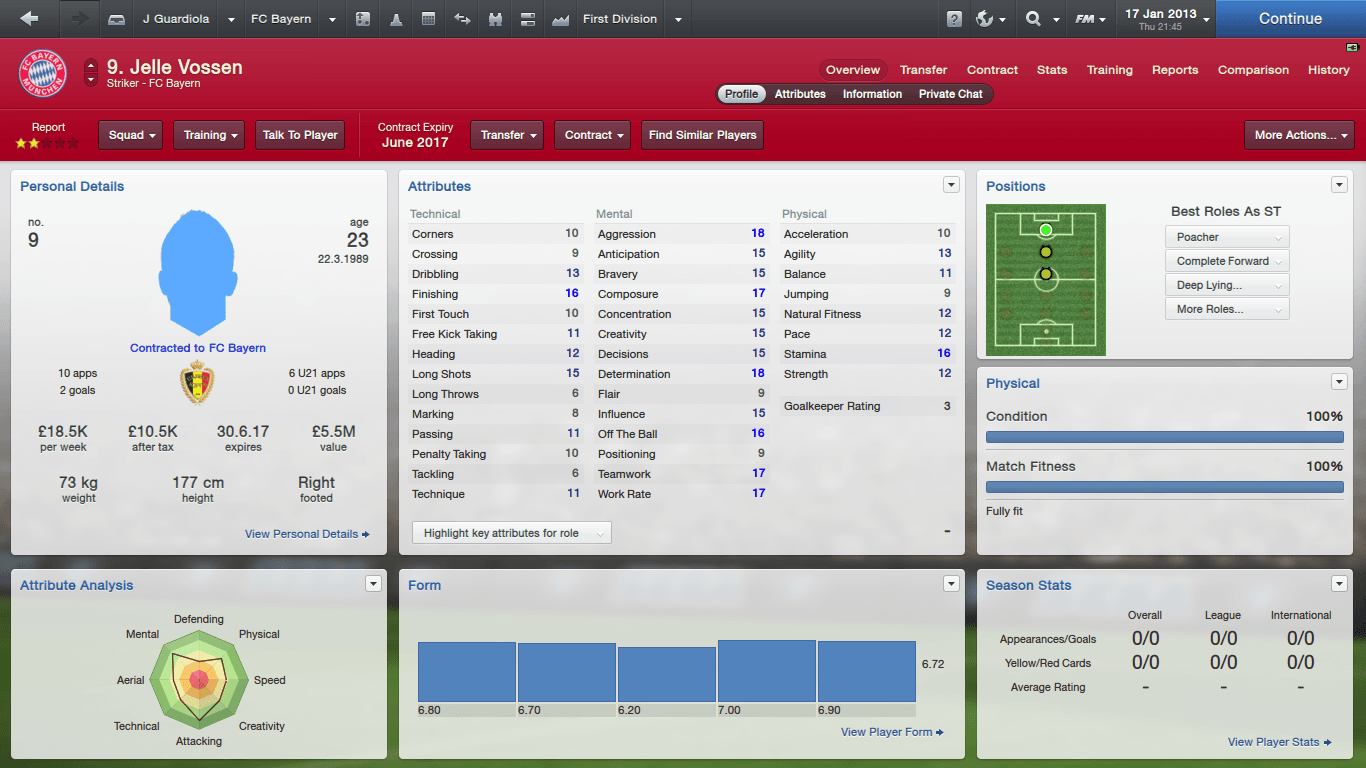