Although disappointed that you beat my VfB

I didn't think I was going to at first they put up a good fight!
Login to Quote

Glenn T
9 years
Great month Zeeby! Nice to see you're having life easy at Hannover. Time to knock Bayern and Dortmund off that perch!
Login to Quote

I have never had this before where the team clicks on my new tactic instantly. Either way its working and I am excited to push on. Thank you
Login to Quote

Hannover fans were out in force as Hannover played Newcastle at St.James Park. Many people believed that Newcastle would bring it to Hannover starting from kick off but with the form that Zeeb's boys were carrying into the game led to a much different series of events. Newcastle played hard in the game but Die Roten managed to keep the lead despite Dragovic's sending off late in the second half. Reducing the game to a 10 on 11.

I know quite stoked on it!
Login to Quote

With winter on its way clubs look to push for those points that will determine whether they will be fighting for the title or against relegation. For Hannover 96 they will undoubtedly be looking for a UEFA Champions League spot. Unfortunately after Die Roten's game against Augsburg they have to play current title holders Borussia Dortmund, who are also holding the spot at the top of the league.

Unfortunately for Hannover after the Augsburg game their star keeper Ron-Robert Zieler was injured with back strain in a training exercise expected to be out for 2 weeks. This will affect Hannover as in their next fixture they would have requested everyone to be fit.

Jer
9 years
Quoting Game of Thrones now? Hahaha. Not much can be done against BVB but the other match was a great result. Keep it up Inq. I got 96 reasons but a b*tch ain't one.
1
Login to Quote

JasonRM
9 years
Great job so far Inq, I'm sure next time you play Dortmund the result will be flipped!

Glenn T
9 years
Unfortunate result against Dortmund, but like Jason said, I'm sure it'll be the other way around next time

shylax
9 years
Good results beating Newcastle and Augsberg, unfortunate against Dortmund but they're Dortmund so I can't chastise you too much.

Since Marcel Risse's transfer from fellow German club Mainz he has moved mountains. His performance in the Bundesliga and out have proven the larger clubs wrong. Due to the nature of the game it is only common for hidden gems like Risse to be skimmed over by the large international competing teams. Lucky for Hannover as they brought the 22 year old in. Marcel being the main reason the move happened promptly. Due to the difference in stature of Mainz and Hannover.

Risse's performance in the league have been exceptional. Scratching two goals and three assists to his impressive tally performance. His transfer has largely been met with positivity fan sources stating that the capture for four million euro's a truly inspiring catch. Risse has stated that he also is happy with his form for Hannover. With his form total average rounding off at a reasonable 7.20 it would be hard to see anyone doubting the wingers influence on games. This is ideally seen as Zeeb's first ever master piece signing.

All in all though there are still problems with Risse that can't be ignored. Although his form doesn't lack much his fitness does. Every game we have seen Marcel Risse start we see him sub off after the first half. Undoubtedly Zeeb has pushed him on an individual training regime but, with fixture flying in locally, nationally and internationally, Risse's fitness and availability leaves much to be desired. Hopefully Risse can improve on this and show that he can remain fit for consecutive games. Else Hannover might be looking elsewhere for better alternatives on the right wing. 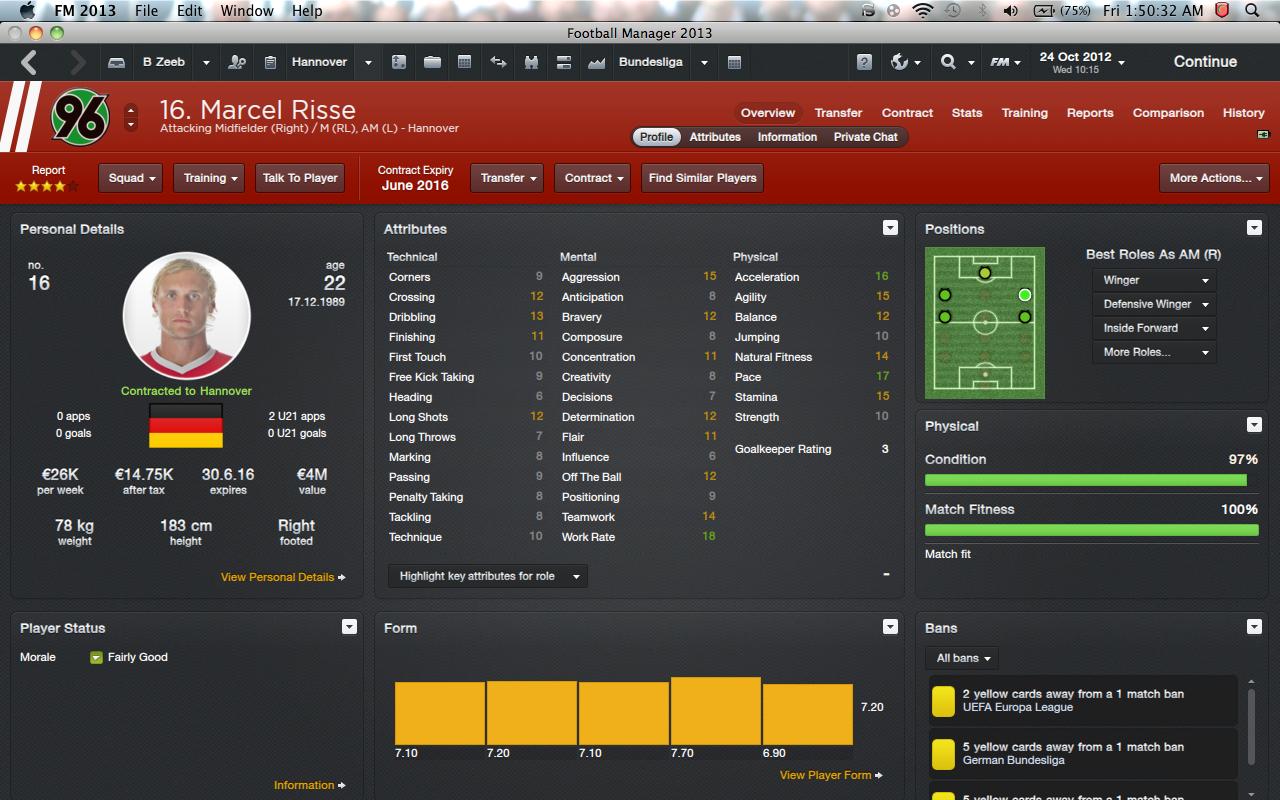 shylax
9 years
That was a pretty good update, I wish I could do writeups like that!
1
Login to Quote

shylax
9 years
That was a pretty good update, I wish I could do writeups like that!
Login to Quote