Verdinho
9 years
What a result v Bremen!
Login to Quote

Inquisition
9 years
So my save crashed so I have to re-edit the last game as I saved after the Freiburg one. At least I managed to bag a win as I did last time.
Login to Quote

Verdinho
9 years
At least you got all 6 points again. Keep the updates coming!!! I've not seen so much of the story recently
Login to Quote


Will have a a few posts tonight after work. Sorry been real busy!
Login to Quote

The road to Malaga

Beno Zeeb's men push on to Malaga today where they face off against recently appointed Javier Irureta's side. The 64 year old took charge at La Rosaleda in December after long time manager Manuel Pellegrini left for Inter Milan.

Irureta's time at Malaga so far has been uninspiring. Early in the league Malaga were boasting a position widely expected of them while Pellegrini was in charge. Shortly after match day twelve they dipped in form and them team showed a lack of work ethic. Where the only decent performances came from crowd favorite Isco and Uruguayan Diego Lugano. Lucky for Hannover as they head into an away match against Los Boquerones. A match that would have seen pundits expecting Malaga to walk away with an easy win last season, when Malaga made a heroic effort domestically finishing 4th in the Liga BBVA. This year the fixture is a whole lot different where both sides have completely switched positions, in terms of their domestic positioning.

Even with this added boost to morale for Die Roten, they still have to be wary of the capabilities of Isco and French Toulalan when they come to play football. Wonder kid Isco is an absolute unstoppable force behind the striker creating and finishing chances while Toulalan can break down attacking play while sitting in his preferred position of a defensive midfielder.

Stuttgart fans looked on in disbelief as their dominant team let a mistake cost them the game. Gotoku Sakai made a clumsy clearance to Stuttgart's goalkeeper Ulreich which Hannover's Mame Diouf picked up on and smashed the game winning goal into the net.

Walter
9 years
What a win against Malaga, especially away from home

Thanks man! I really was surprised!
Login to Quote

Die Roten have been playing out of their shoes as of late, completely contradicting any lost points between December and February. Which caused conflict in whether Zeeb could keep Hannover performing at the level they were.

Malaga heads to the AWD-Arena for the second leg of the round. Down three (away) points Malaga have work to do and nobody counts on them to roll over on their backs and take the beating. On the other side though Hannover fans are looking for a similar performance from them at home and Zeeb will undeniably be looking for the same presentation from his side.

After Hannover's win against Spanish side Malaga the German side has drawn Russian super power and financial beast Zenit St.Petersburg in the Europa League second round knockout round. Hannover will have to be wary of Zenit's Hulk and Italian Criscito. The first game is at Zenit's home ground the Petrovsky.

Walter
9 years
Another amazing win vs. Malaga, you absolutely smashed them!
1
Login to Quote

Louis O.
9 years
A great win Inq, you demolshed them over the two legs!
1
Login to Quote Hannover face a relegation battling Mainz in their 23rd match of the Bundesliga. To top this off the game recedes only three days after their game against Malaga. Zeeb will without a doubt be looking to replicate their 2-0 win over Mainz they showed in September 2012. After this game Hannover do have to other relegation candidates Augsburg for the 24th game of the season.

With only ten more games after these two Zeeb will be looking to open the gap between Hannover and fourth place and close the gap for second place. If Zeeb can manage to finish with Champions League football not only will it bring income to the club to buy better players, but it will increase Zeeb's stock. Lots of fans have been speculating whether Zeeb will stay with the German side or choose to move on. Unfortunately for the fans the Hannover board hasn't presented a new contract with Zeeb yet to put the rumours to rest.

Nicolas Gaitan joined Hannover 96 from SL Benfica in the January, replacing an inform Huszti. Once the the replacement had been complete fans from Hannover were heard to be skeptical of the piece of business done by Mr.Zeeb. No one was sure of whether Gaitan could effectively replace the Hungarian Huszti. Yet Zeeb was optimistic and it has looked to have paid off.

Since his arrival at the AWD-Arena he has made six appearances so far for Hannover. Boasting an average rating of 6.93 and scoring his first goal for the club. Gaitan looks promising for Hannover and with the addition of Sadio Mane to rotate with him it is undeniable that the Left Wing is as strong if not better without Huszti.

Gaitan in the past week though has been hit with an injury after twisting his ankle in training. This sets him out for the most part of the season (3-4 weeks recovery). Zeeb can only look forward to have him back for the final games of the Bundesliga to secure their spot in the Champions League. His pace and agility is missed greatly on the Left side of the field. 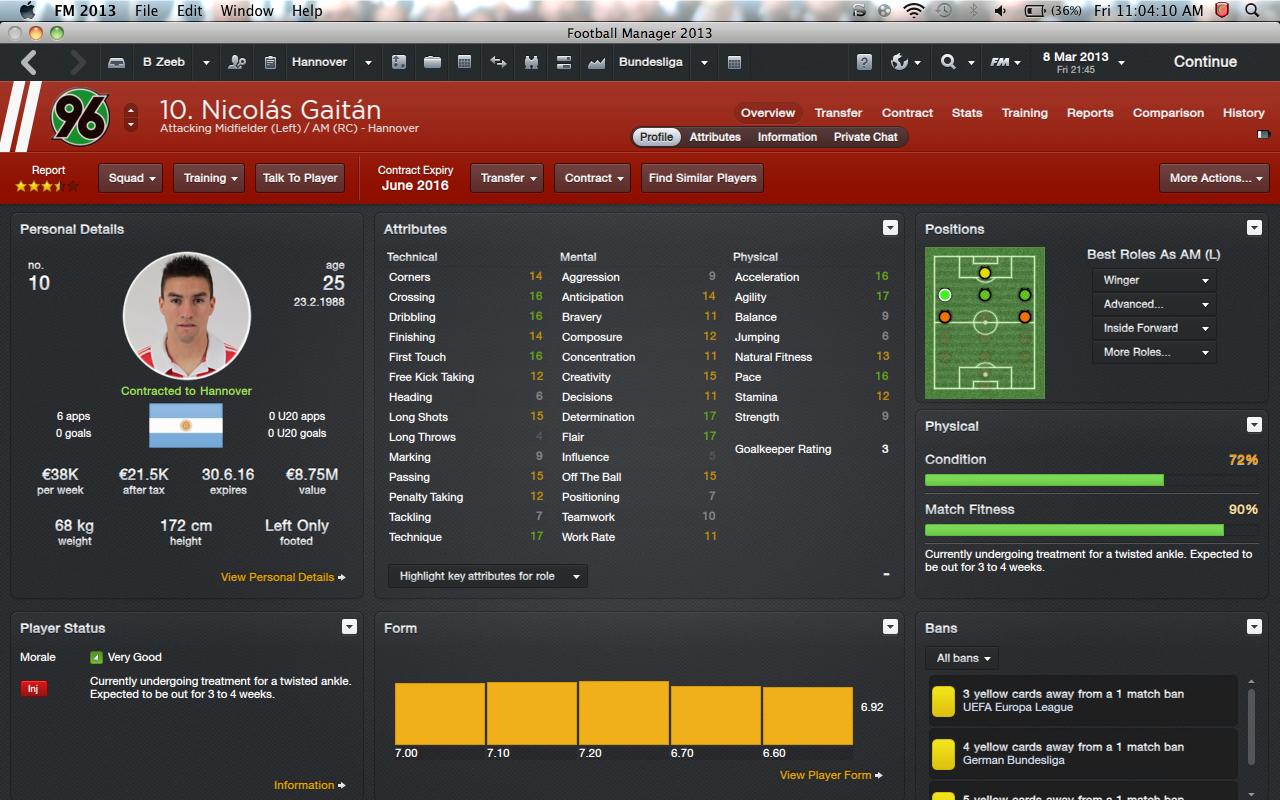 Zenit St.Petersburg were knocked out of the Champions League Group H by Arsenal and Juventus. Zeeb openly stated that if Hannover manage to beat Zenit then the chances of Hannover making a good run in the Champions League (If they qualify) are very strong. Zeeb also stated that he backs his boys to take it to the Russian side in both fixtures but, the likes of Hulk will try to counter that.

Hannover have been on a strong run lately winning seven games in a row. Should they fall here it could potentially break down the morale to the bone. Not to mention their game against Dortmund only a few days after.