And of course I will make those two banners

wellsy1498
6 years
What a sill man to reject you. Keep up the good work

@Justice: With the revolution happening at Racing, he won't even get the chance to be coach here.

@Walter: You = 4 year old.. Thanks, will appreciate it

Raul's Sinks Into His Memories

I walked to training, with Dominguez, my assistant manager, carefully tracing my steps. It was almost like I had a pooch on my back. I shrugged it off, and headed into the practice, where a loud cheer and claps could be heard. It was Ivan Bolado, the new signing, that seemed to be on fire, scoring almost any opportunity that he had. It was a joy to watch, and then a wonderful chip goal to Sostres, our 2nd, yet talented goalkeeper, could do nothing about.. It was then, that some of my memories were triggered.

The date was September 18th, 1998, a match against Italy. Yes, Italy. I remembered. The Stadio Arechi was packed, and it was just over 80 minutes, and we were behind. It was one of the last preparations we had before the World Cup, and I had only been at the senior Spanish set-up for 2 years, and I was ready to impress the manager, Jose Antonio Camacho. I was not at my best, yet the manager, had appointed me vice-captain, and when the captain was subbed off, I was given the armband. A team-mate of mine had chipped the ball towards me, and I was alone, with the defender a couple steps behind me. The goalkeeper rushed out to clear the ball, but he was too late. I chipped the ball first time, and the Italian goalkeeper, Angelo Peruzzi, could do nothing, but stare at the ball go over him, and slide into the goal. The match ended 2-2, which ended a 10 year barren spell of losses against Italy. 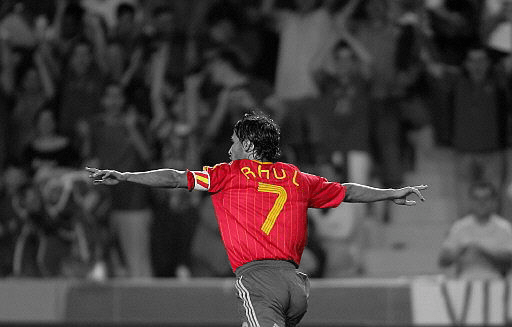 Raul celebrating his goal against Italy.

I stared into an empty football field, with Dominguez waving his hand through my face. I immediately reacted, and shoved his hand away. What the hell just happened to me, and how much time was I out? It didn't matter, as I ignored my assistant manager, and praised Bolado with his brilliant goal. We were ready for the opening game against Ourense, and we were going to win.

Yet again, Justice has done the graphics for me, and boy, it looks spectacular!
Login to Quote

@Rab: What the hell? Is it your period again?!
Login to Quote

Raul Gonzalez, currently the Racing manager, has announced the arrival of different staff members, including Jack Karadas, a former staff member at Real Madrid. Another notable arrival is now-former manager of Sporting "B", Inaki Tejada, joining up with Raul immediately.

First up is Juan Ramon Martin, who was without a club, before Raul snapped him up on a 5 year contract. After ending his playing career in 2006, he was offered a place as a staff member, which saw him overtake the Assistant Manager role. Not long, he would move on to be a goalkeeping coach, after the club asked him to take such role for 2 years. However, he retook the Assistant Manager for 6 months, as the club could not find an adequate replacement for the departing assistant manager. However, these last 4 years, he was working as the Director of Football role and the assistant manager role at Ecija, where he was left without a contract at the end of the season. Now, taken under the wings of Raul and Racing, he has been given the U19's Assistant Manager role, and will be trying to work his way up through Racing. Juan Ramon Martin will be earning £240 p/w.

Next up is Jose Sicart, who has only worked with Gimnastic at the staff role for two spells, lasting from 2003-2007. However, the new Racing Director of Football returned for a 1 year spell last season, but was let go by the club. He will be earning £1,000 p/w until 2018 for Racing.

After Raul had a major staff clear-out, he decided to bring up a replacement for the departing Elisardo, with Juan Nogal replacing him. Nogal had a massive spell at Conquense, which lasted up to 12 years. The new staff signing was in Conquense from 1998 to 2010, something very noble, and hopefully, Racing fans can count on their new Physio to stay as long there. He will be earning £275 p/w, with a deal lasting up to 2018.

Perhaps the better known staff signing from Raul, Pablo Pinillos, agreed to be the U19's Coach for 5 years. The fans have lauded Raul, after Pinillos spent 6 years at Racing before, as a player, and has captained the side before. The Spanish right-back was offered a staff role as a scout at Racing, and he accepted, before stepping down himself, claiming it 'was too hard for him'. He will now be taking over the youth side, hoping to teach something to the 'new generation'. He will be earning £500 p/w.

Up next is Inaki Tejada, who will replace Alejandro Dominguez as the Assistant Manager, with Raul personally pursuing the new staff member. Inaki had different spells at Sporting, as an assistant manager in the senior side, and the reserve side, which is Sporting 'B'. Hopefully, Tejada will be a great signing, as Racing had to pay a £40,000 compensation fee to Sporting 'B'. Now, the former Bilbao player will team up with Raul, and will be earning £825 p/w for the next 5 years.

Raul's last staff signing is Jack Karadas, a Norwegian scout, who had been out of work for the past 5 years. His first and last job was at Real Madrid for the 2008-2009 season, where he failed to convince Real Madrid that he should stay, prompting him to leave. Now, 6 years later, Karadas has joined Raul's revolution at Racing, and will be overseeing a scout role. He will be earning £475 p/w at Racing for the next 5 years.

I HAVE NEVER HEARD OF ANY OF THESE PEOPLE

Jer
6 years
@Walter: Hehe, thanks mate. Hopefully, I'll be able to improve every day, for you guys

@Justice: Yeah, they have some decent stats, and remember, I'm in the 3rd Division in Spain!

@Rablador: To my fair share, I can understand you, but I know two

This pre-season was pretty good, which saw us visit teams such as Albacete and Guadalajara. Without hosting any matches at El Sardinero, we did pretty well, only being defeated once, which was the first game, which we made a mistake, and fielded a player out of his comfort zone. The team looks really good, and I can definitely see us having a successful season.

The banners from the Segunda Division B1 and Copa del Rey were made by Walter, with lots of love. lol. They are really nice banners, and if you need any help with any banner, do NOT consult with Walter, because he's already taken.

Did you see what I did there ;)
Login to Quote

shylax
6 years
Nice pre-season results, but of course league competition is much harsher. By the way, did you post the tactic you're using?
Login to Quote