Jer
6 years
@Akash: He's BBVA standard, and I wanted him a long time ago. The only problem is that he decided to sign on deadline day.

@Neal: Didn't know that he was that good :P.

@Walter: The experience will serve us well, especially since we are in the third division!
Login to Quote

After picking up maximum points against Ourense, Racing were storming the Segunda Division B1, with the new signings their new manager, Raul, had made. Into their journey of the Copa del Rey, Ivan Bolado, their new striker, awkwardly twisted his ankle, as he was tackled by a player of the opposition. After the match ended, Racing's Head Physio, Jose Manuel Mantecon, analyzed the injury, he communicated to Raul, that Bolado's injury, could see him miss up to early November, leaving Raul with 2 other strikers, Moussa Kone and John Ayina. However, he is expected to start David Miguelez up front instead of those two, as Bolado and Miguelez had been exchanging first-team places.

Ivan Bolado whilst playing at Racing this season.

Raul commented to the press,"It's unfair that Ivan (Bolado) has to go all of the treatment to get back on his feet. On the first look, it gave the false expectation, when we thought that he was going to miss 2-3 games, 4 tops." The manager, did give a strong statement to the forwards in the club by saying,"Whether John (Ayina), Moussa (Kone) or David (Miguelez) take over the striker role next match, I expect them to step-up, and challenge Bolado for the first-team spot." Now, the question remains.. Will Racing be able to cope without Ivan Bolado?

Fast forward two weeks later, and their main play-maker, Francisco Yeste, fell down early in the match against Guijuelo, and was diagnosticated with a torn hamstring, which will see the 33 year old miss up to 4 months, according to Jose Manuel Mantecon, Racing's Head Physio. With the player just settling in at Racing, both the player and the manager, Raul, will be disappointed to see his new signing out until January of 2014, something that puts his stay at the club into consideration.

The player himself, said,"I'm really mad at the fact that I'll probably be watching from the stands, in both the practices and the matches. I really hope that someone can take my place, as I'm the sort of player that prefers the team winning with or without me." The former Bilbao player continued,"The physio will try to do the best to get my to my top condition, but at the moment, I'll be out." It is up to Raul to see who will take Yeste's place, and whether he makes a better replacement.

Justice
6 years
unlucky with the injuries

Walter
6 years
Two very unlucky injuries, hopefuly you can adapt and recover from them!
Login to Quote

Unlucky, though.
Login to Quote

Neal
6 years
Unlucky injuries, hopefully you can push out without those players!
Login to Quote

@Walter: Hopefully someone will arise from the situation, and be the better player.

Hey guys, myself, Justice and Walter have decided to make a partnership between our three stories. What this basically means is that we will play versus games against each other using our three teams (Racing Santander, F.C. Viikingit and Botafogo FR), add fictional scenarios involving our three stories, and much, much more. Yes, this is very experimental proccess, but I am confident that it will help to make our story writing to be that bit more enjoyable.

After deciding to do this partnership, we decided to play the Mathers-Raul cup, with two legs, and in two neutral stadiums, to attract more fans. In the first match, Racing Santander dominated every aspect team, with Vikingit failing to score, thanks to the heroic attempts by Racing's goalkeeper, Mario.

Myself and Pauker have already played a little versus competition between F.C. Viikingit and Racing Santander, which was extremely entertaining and very enjoyable to play. It was a two-legged affair which brought plenty of action and excitement. Let's see how it went. 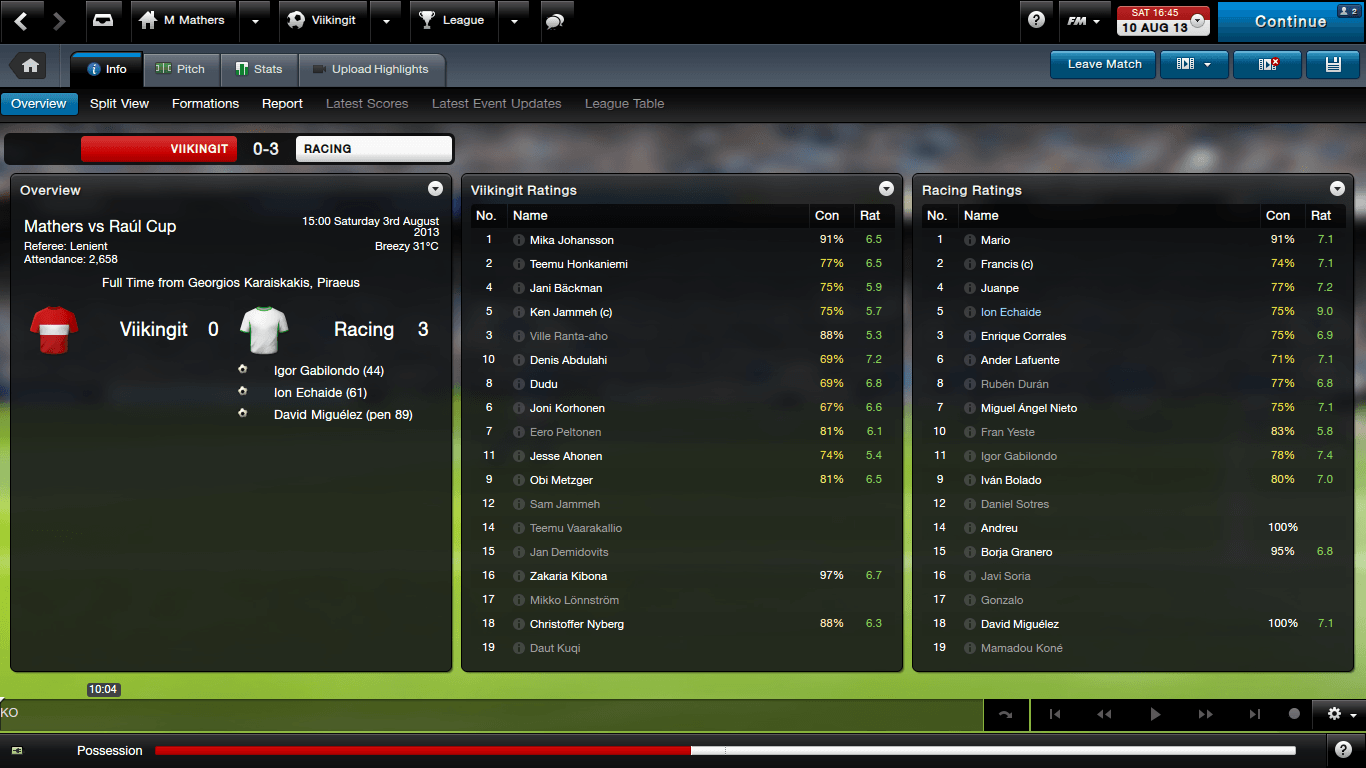 The first game demonstrated the difference in class between our two teams. Racing's players are a step up from Viikingit, but Racing's tactical system was also superb and unbreakable at times. Racing deservedly won the game by a comfortable score of 3-0, and put themselves in a very comfortable position in the tie. 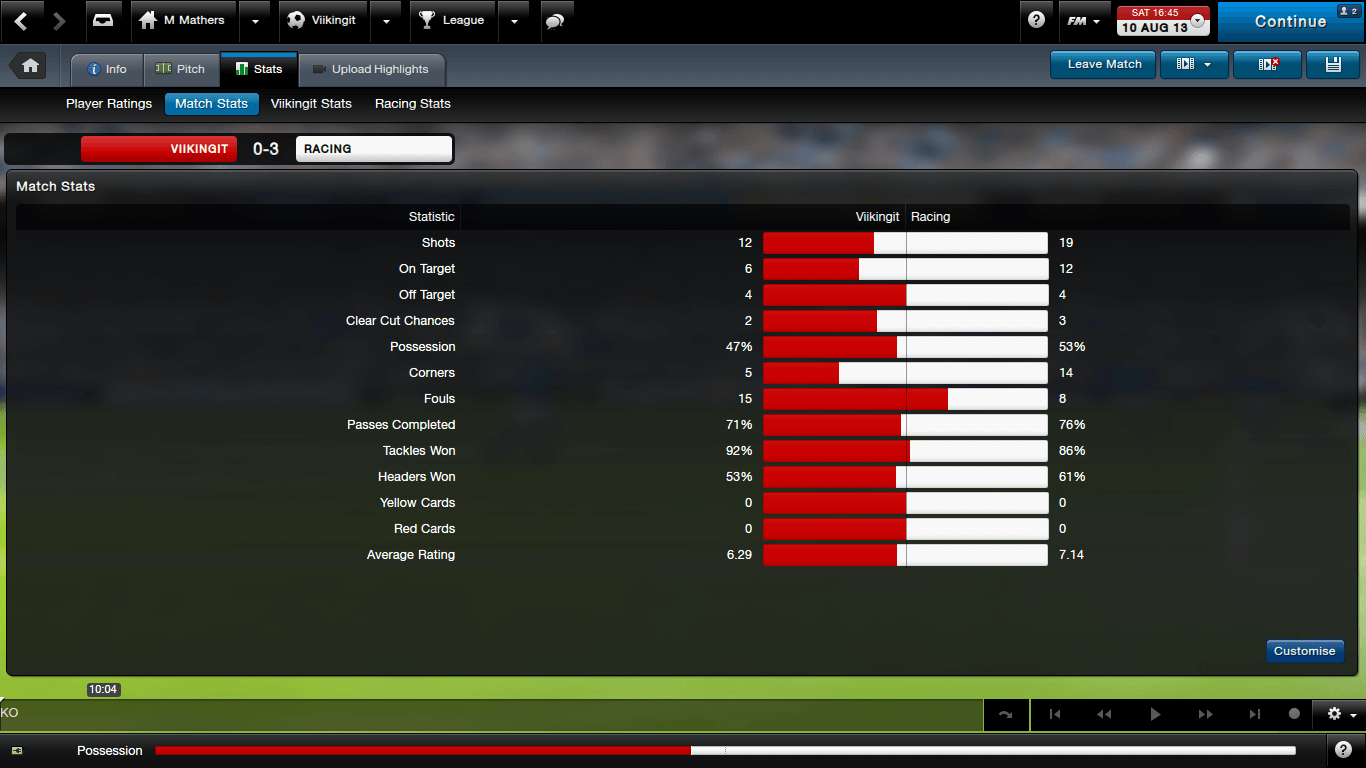 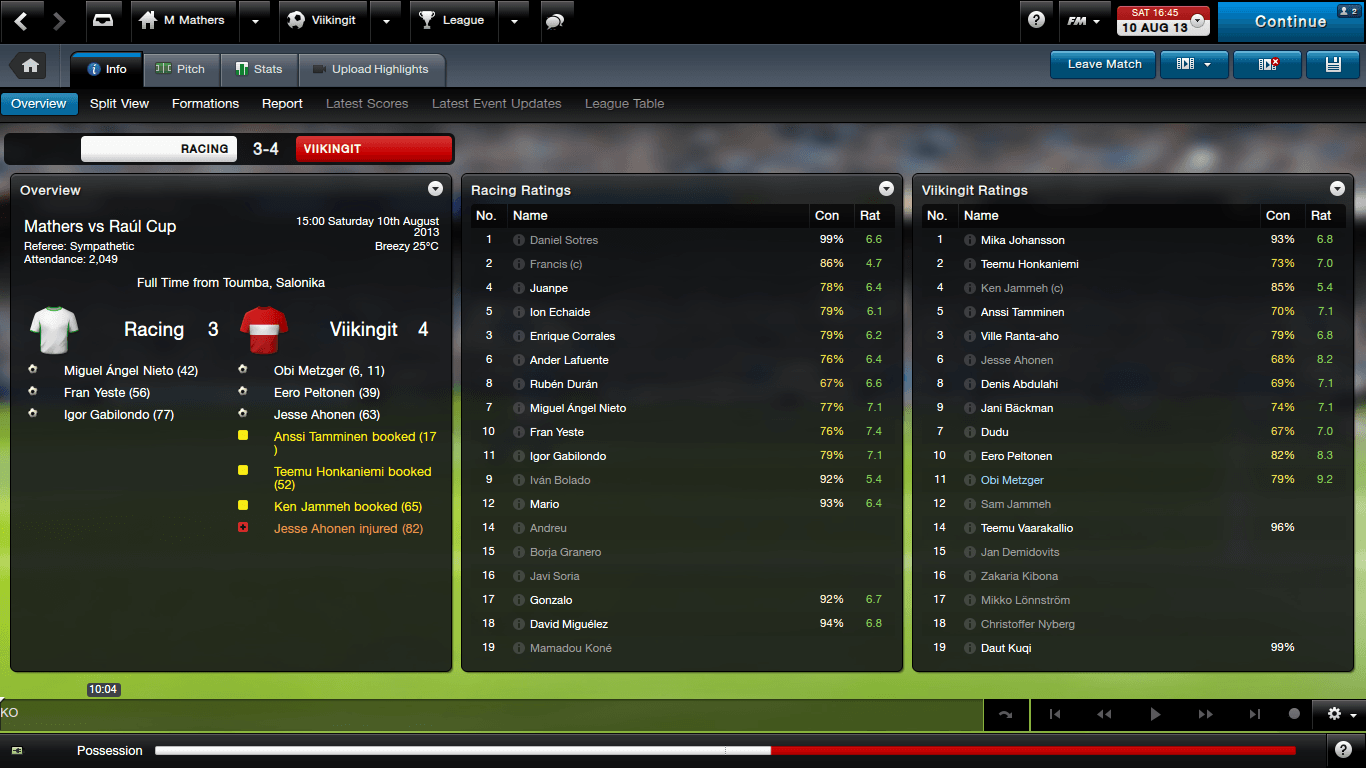 I can certainly say that the second match was full of excitement, and produced seven goals! F.C. Viikingit somehow, and in spectacular fashion, made up the three goal difference by going 3-0 ahead by the 39th minute. However, a spectacular display by Racing saw the game finish with F.C. Viikingit just about earning a 4-3 win, but what was still a huge shock win. With a some tweaks into the side, Raul managed to win the cup on aggregate. It was a spectacular game full of goal action on both sides of the pitch, and was one of the most exciting games that I have played in years of FM, with the goalkeepers tested various times. 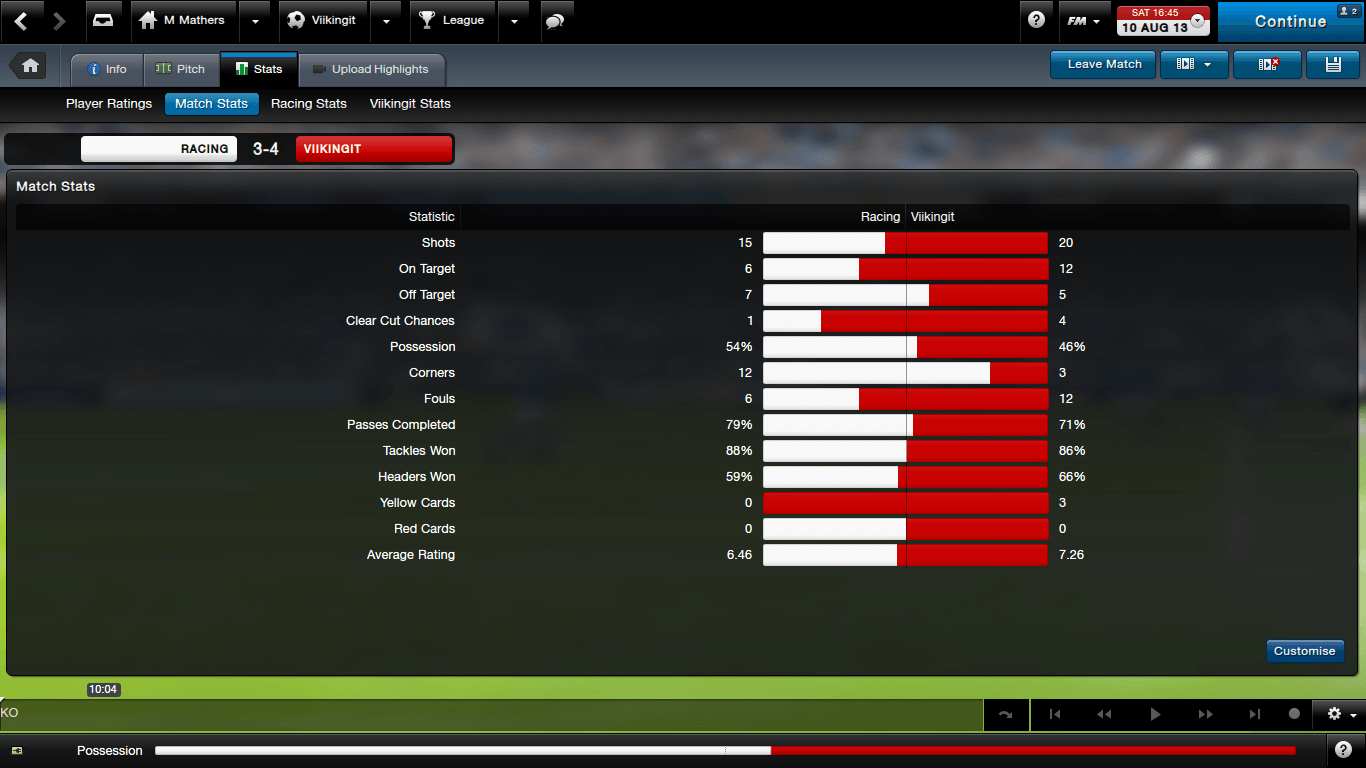 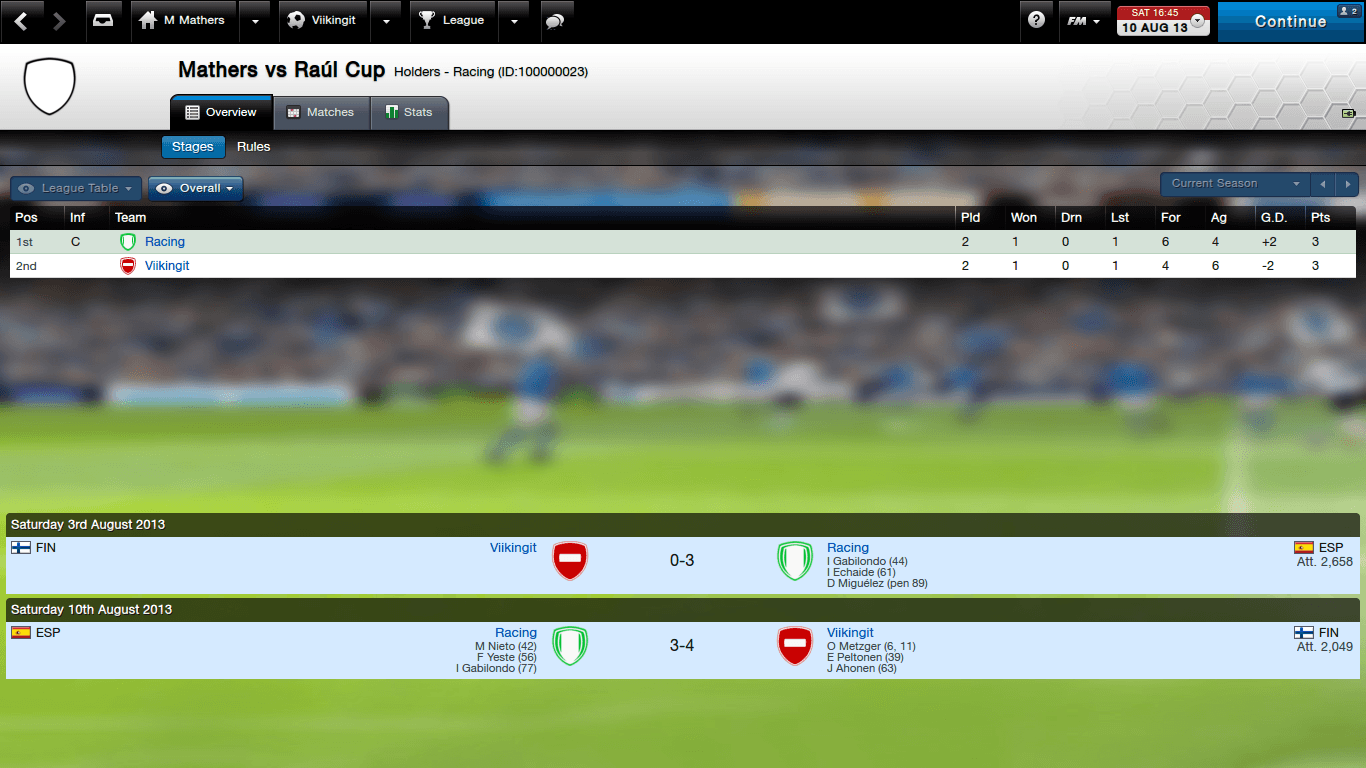 Despite F.C. Viikingit's superb second match fight-back, Racing Santander ran out as winners of the first Mathers-Raúl cup, and deservedly so. They showed their quality to win the tie in the end, even though it was by goal difference. Congratulations to Viikingit for their final match attempts, and indeed to Mathers, who's tactical prowess earned his side an unexpected, yet well deserved shock win. Long live the relationship between F.C. Viikingit and Racing Santander!
Login to Quote

Keep up the good work Pauker. Unlucky with the injuries but i'm sure you can do well without them!
Login to Quote

Jer
6 years
@Radders: Thanks mate, means a lot :). We should be okay, might be drawing some matches, MAYBE losing one, in the worst case

Kane
6 years
A very nice idea, expecting to see it take off on here now. Everyone on here is so original you see!
Login to Quote

Walter
6 years
Very nice cup results for both teams, looks like there were a lot of goals!
Login to Quote