I woke up feeling tired. Last night was brilliant, COD with my mates is the real deal. I quickly shaved, showered and put on my tracksuit in preparation for training and left my house for Spotland. I was a bit late today, but I think the manager can be excused for something like this. There were a few cars in the parking lot, suggesting that the backroom staff were already here and also emphasising the fact that I was late, although it wasn't my fault... it was the alarm clock's.

The massive automatic doors opened as I approached them, and I walked in gripping the sack of footballs Beech had left in the waiting room. I was in a good mood that day as well, the best I've ever been in since the promotion actually... since then it's been hectic. I turned into the hallway of offices and placed the sack outside the dressing room and walked towards my office to boot up my computer and get the day started before training did. When I passed Chris Beech's office I heard him talk on the phone to someone. I thought about knocking and entering, but I decided to eavesdrop for once. I could barely make out what he was saying, but something really stuck out...

"...yeah I see what you mean Pete, everything's pretty much the same around here since he kicked you out." Who's Pete? Surely, not... THAT Pete?

"Oh really? I don't think he knows what he's doing mate, sure he's got us promoted and stuff, but he's an actual prick in the dressing room, especially when he terminated your contract though, that really pissed me off." He was talking about me! With Peter Cavanagh. The man whose duties I relieved a few months ago...

I wasn't going to listen to anymore, I smashed the door open. Beech dropped his phone and the battery plundered out, ending the conversation. "You cunt," I said. "You absolute cunt of a man."

"Say no more, I thought you were better than that. Pack your bags homie, you're getting replaced." And that was it. The look of dismay on his face was priceless, but he deserved it nonetheless for backstabbing me. Who's going to betray me next? Who's going to backstab me? Who's going to walk out on this club? The coaching staff need replacing, and I have a good friend who might be willing to join us...

More ex-internationals are on their way to Spotland Stadium as Rochdale gaffer Justin Credible signs England and Manchester United legend David Beckham as a coach, and replaces assistant manager Chris Beech with Ugo Ihemelu -- a former USA defender. These two signings have come in wake of Credible himself announcing that "the club will be doing everything to move forward" and by bringing international experience into the team, he is perfectly on par.

The former Manchester United and Real Madrid midfielder has made his friendly relationship with Credible very clear since signing for Rochdale, and has said that he knew Justin Credible was an ambitious man and was pleased to see the club in League One. He will be linking up with his ex-Manchester United and England teammate Andy Cole, who is also part of Rochdale's intriguing coaching staff for similar reasons.

The 31 year old former USA defender Ugo Ihemelu will be Credible's assistant following a rift between the latter and Chris Beech, which ultimately led to Beech's sacking. Credible and Rochdale AFC refused to elaborate and the details of the row will forever remain a mystery within Spotland...
Login to Quote

Neal
6 years
What a f*cking beech!

MJK46
6 years
Nice additions to the staff
Login to Quote

Ahh, I see what you did there haha

that son of a beech


Things have definitely been going our way. It's been a joyful ride up until now and we've been working hard:

We started off after the 3-1 defeat by Colchester with a narrow 1-0 win over Shrewsbury in which Bahamboula calmly slotted the ball past the keeper after 33 minutes. The next game was a Johnstone's Paint Trophy match against Peter Schmeichel's Bury side and needless to say, despite their manager's ability we beat them 4-2 on enemy soil. After that we again beat our bitter rivals but this time it was Oldham Athletic... we beat them 3-0 on their turf despite being underdogs. We beat Leyton Orient 3-0 yet again, but the next game we played was awful. We were losing 2-0 at half time when substitute Esteban Lopez fired in two free-kicks to rescue us a draw. We then went on a 5-match winning streak, beating old opponents Chesterfield, Bradford (in the FA Cup 1st Round), Gillingham, Carlisle and Shrewsbury (Johnstone's Paint Trophy North Quarter Final) in the process.

In the next game versus Tranmere, we gave up a solid 2-0 lead to draw 2-2 in the final minutes of the game but bounced back win yet another win in League 1 against Yeovil, which again required a late goal to get us the three points, and we also beat heavy underdogs Nuneaton 4-1 in the FA Cup 2nd Round in which long lost signing Ryan Noble finally scored his first goals since signing for Rochdale.

I reckon we can definitely win the Johnstone's Paint Trophy and League One this season, those are my aims.

Unbeaten since our last game with Colchester (winning 11 out of 13 games), we're doing brilliantly in the league (even though we're predicted to finish 21st AND we've got two games in hand):

I only managed to bring in one player to bolster our midfield. 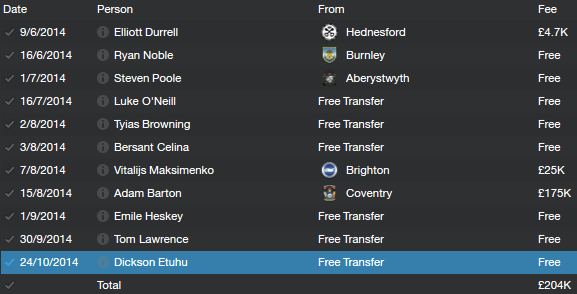 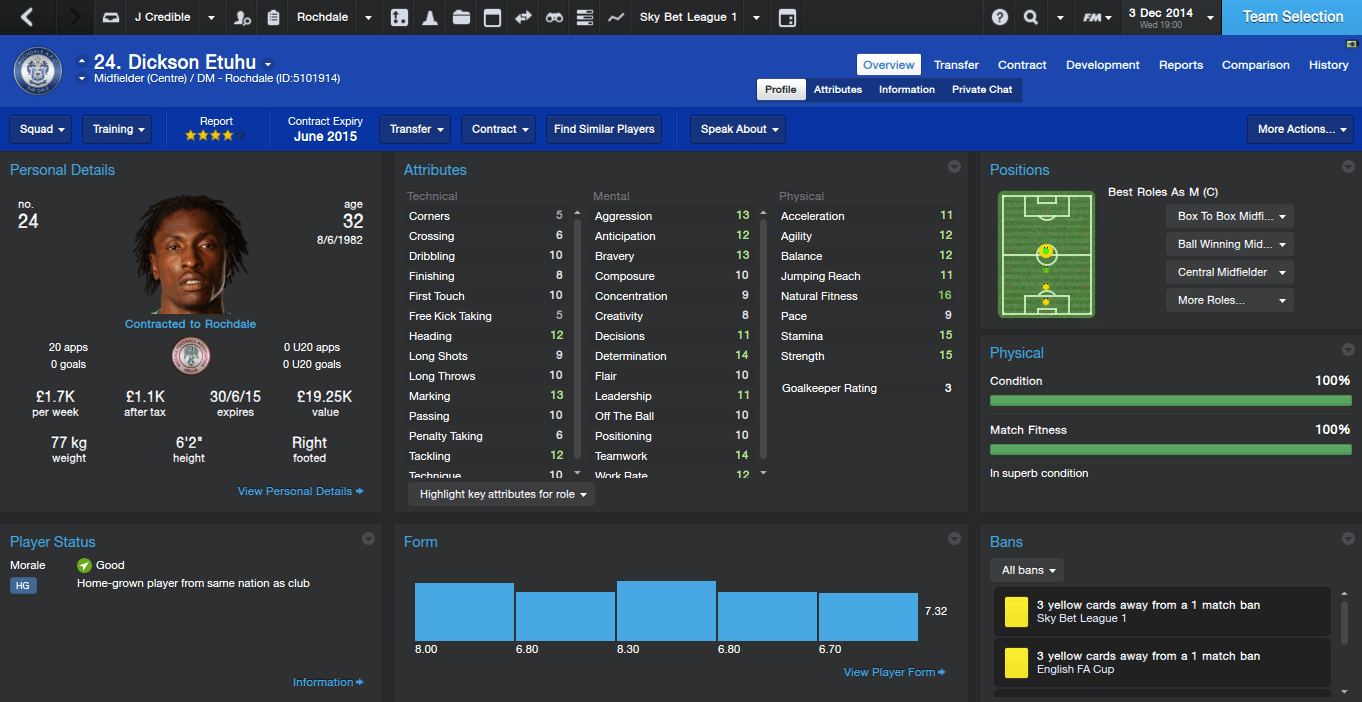 Etuhu is a quality midfielder, he has lots of top level experience with teams such as Fulham, Blackburn and Manchester City. He will ply his trade in the central midfield area of the pitch and he's been great so far... A bargain at the best.


The upcoming fixtures are going to be a breeze if we carry on our current form, but the key here now is to maintain our performance levels. If those drop, then we as a team drop too: 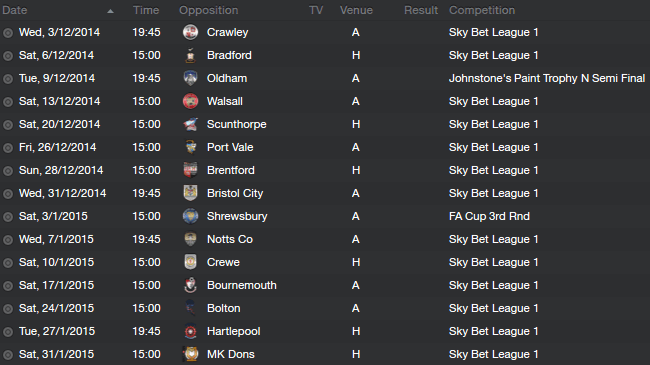 JasonRM
6 years
Absolutely fantastic month for Rochdale, the championship is in sight for sure

I can see Rochdale becoming a major force in Europe in a few seasons!

@Lucas: Haha tell me about it mate

@The Madridista: Yeah man, only if the team doesn't get complacent

I was only hoping for 6th place so we could try for promotion, but I'll take this any day xD
Login to Quote

Aaron
6 years
There are some insane results there mate, and some decent signings! Well done!!
Login to Quote

cheers mate, and yup it is