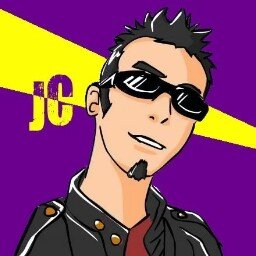 My name is Justin Credible. I was born and raised in Rochdale and I support my local team: Rochdale AFC. My dream is to manage them some day and lead them to the top of the world because I only recently managed to get coaching certificates that will enable me to become a manager. I could never play football physically, but I have an uncanny understanding of the game itself which will benefit me if I become a manager.

: 1. The Beginning
Login to Quote


"Thank god they sacked Keith Hill," I thought as I sealed up my Rochdale managing application letter and posted it into the red letterbox. "Imagine if I get chosen as manager, it's a long shot but it's totally worth it." As I walked back to my car, I pondered as to how slim of a chance I had to become the manager of Rochdale. I was doing it as a prank anyway since today was April Fools' Day... my 25th birthday. The only things relevant to managing on my CV were assistant manager at Tesco's, a small-time P.E teacher trainee and some meagre coaching qualifications, definitely not enough to get me into management. Oh, and if I remember correctly, I also wrote that I brought Rochdale from League 2 to winning the Champions' League in Football Manager 2013... Now THAT's an achievement and a half.

Months went by, yet I'd still received no response whatsoever from the club. By this time I knew they'd realised that it was a joke and must have thrown it into the trash along with many other applications, or they must have asked the caretaker manager to take the post permanently. One night, I received an email...

"Hello Mr. Credible, my name is Chris Dunphy - the chairman of Rochdale AFC. We regret to inform you that you do not have enough qualifications to fill in the vacant managerial role at Rochdale AFC. However, there were not as many applications as we expected and we do admire the courage you showed with your ambitious and amusing application so I want to be the first one to congratulate you on behalf of the board as the new manager of Rochdale AFC. We have organised the meeting for Tuesday 9th July, 2013 at 9:00am. If you wish to withdraw your application then simply email me back and we'll cancel the application immediately.

I couldn't believe what I was reading. This couldn't be a joke could it? No, it couldn't be. Why would the chairman waste his time joking around with me when he's supposed to be looking for a manager...? I had to re-read the email about ten times to take it all in. Tuesday was going to be the best (and the most apprehensive) day of my life...

Jamesg237
9 years
A cracking name and good luck with this story.
Login to Quote

hope you enjoy it!
Login to Quote

@BayernAmerica thanks!
Login to Quote

The meeting on Tuesday went well. 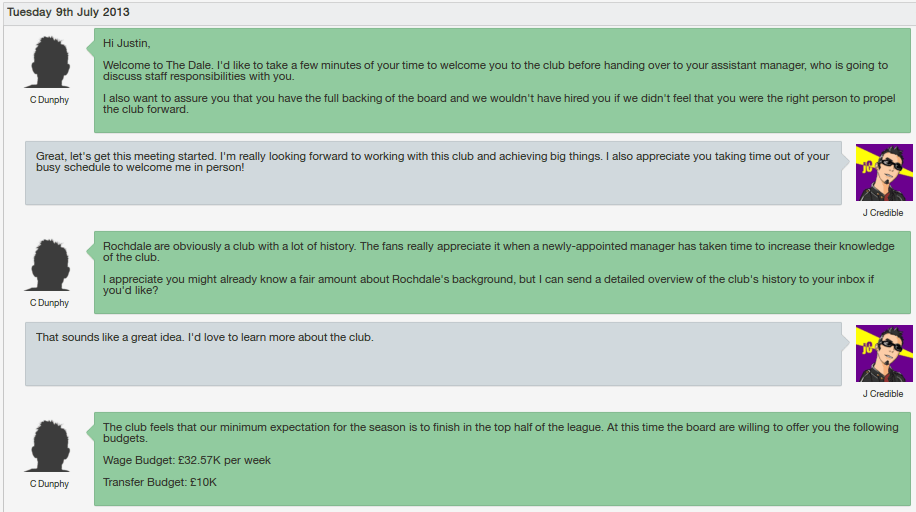 I signed a one year contract until June 2014 with a wage of £1300 per WEEK! That's more than enough money to sort my weekly expenses out and to save up for something awesome. My transfer budget for this season has been set at £10k with a wage budget of £32.5k plus the strong condition that we fight for a top-half finish this year, although I believe we can get promoted. 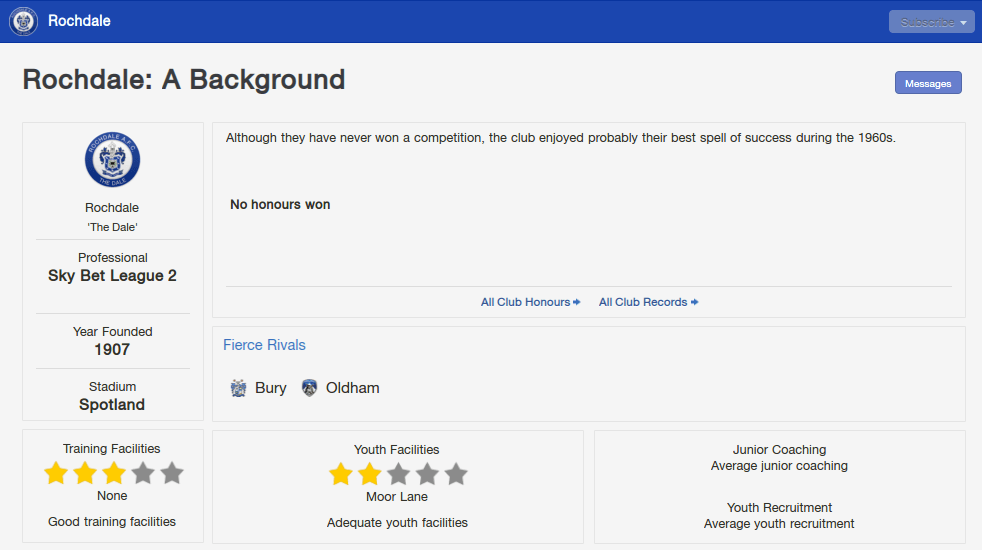 My assistant manager is called Chris Beech and I hope I can get along with him in the future. The chairman organised a press conference to welcome me to Rochdale AFC in a few days before he announces the fixture list to the public:

As I was sat in my new office reading the fixtures list, the alarm on my phone went off to remind me that I was supposed to meet the players in a few minutes before the training session:

JC: I know that many of you don't know who I am, so I wanted to introduce myself as your new manager.

PC: We're looking forward to working with a lesser-known manager that can lead us to the top by bringing in new ideas. What are your plans for this season boss?

JC: Thanks Peter, this season I'm gonna aim for a top-half finish mainly because it usually takes a rookie manager a season to evaluate his squad; even though I'm familiar with you guys, I need to be a bit realistic.

G-Dicker: That's exactly what I think a manager should aim for, you're a pretty ambitious person Mr. Credible! We'll definitely get a respectable league finish this season for the very least.

JC: Hmm, maybe you're right Peter, maybe we could go for promotion.

PC: Yeah, because I'm sure we could get the right results if we're motivated to perform well this season.

G-Donnelly: Peter, I think you're being a bit too unrealistic here. I really don't wanna be judged against an impossible target.

JC: George, nothing's impossible okay? You're not going to get anywhere with that sort of attitude towards football. Be more ambitious from now on. Okay lads, meeting's over and it's time for training, see you all there in 10 minutes!

As the players left the room, I realised I needed to ask Beech to compile a squad report based on the current squad just so I have an idea of who's deadwood and needed to be sold.

Thanks Silas!
Login to Quote

Training went well yesterday, I already have a gist of who's going to be in my first team and who isn't good enough for the club. Having said that, every player WILL get a chance to prove themselves in these coming friendly fixtures and I wish them all the best of luck. So yesterday after I'd woken up, I checked my emails as usual and the latest email was the squad report from Beech: 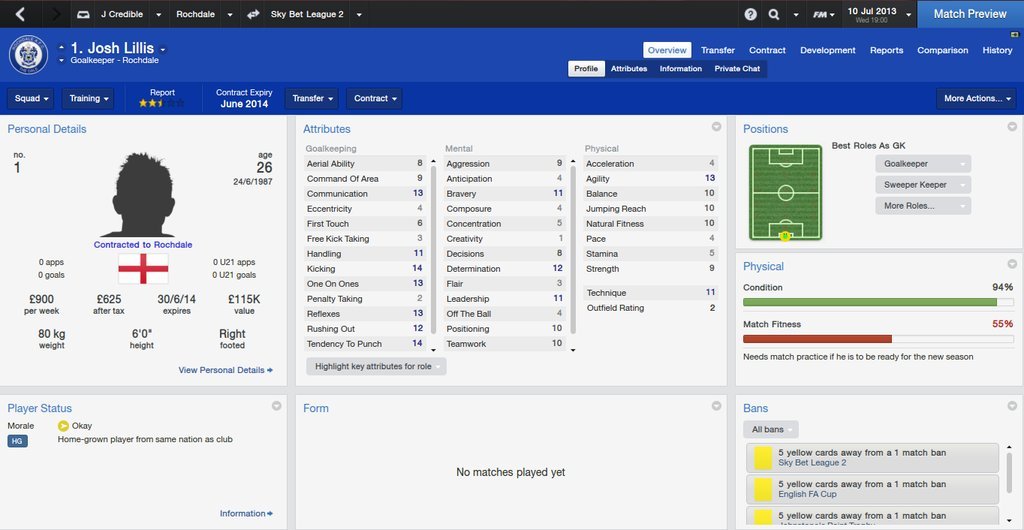 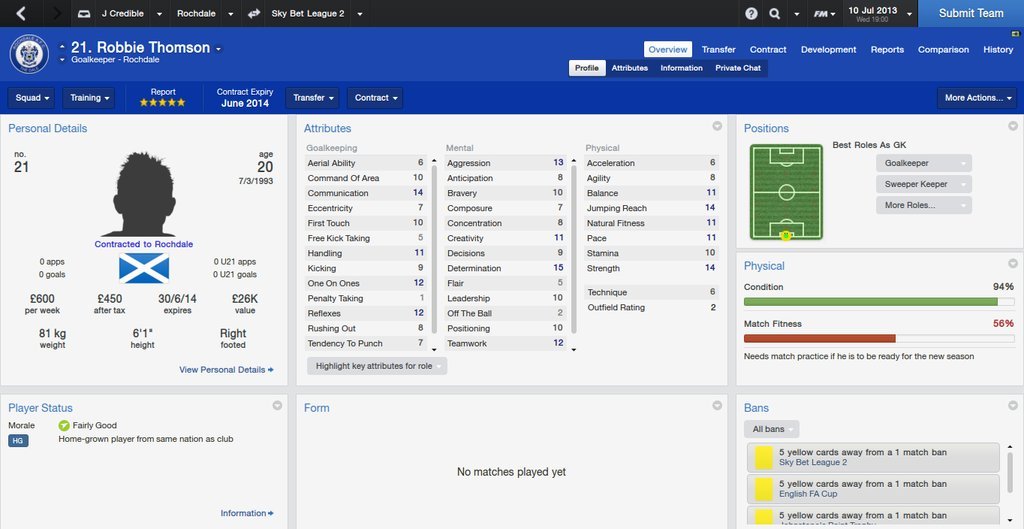 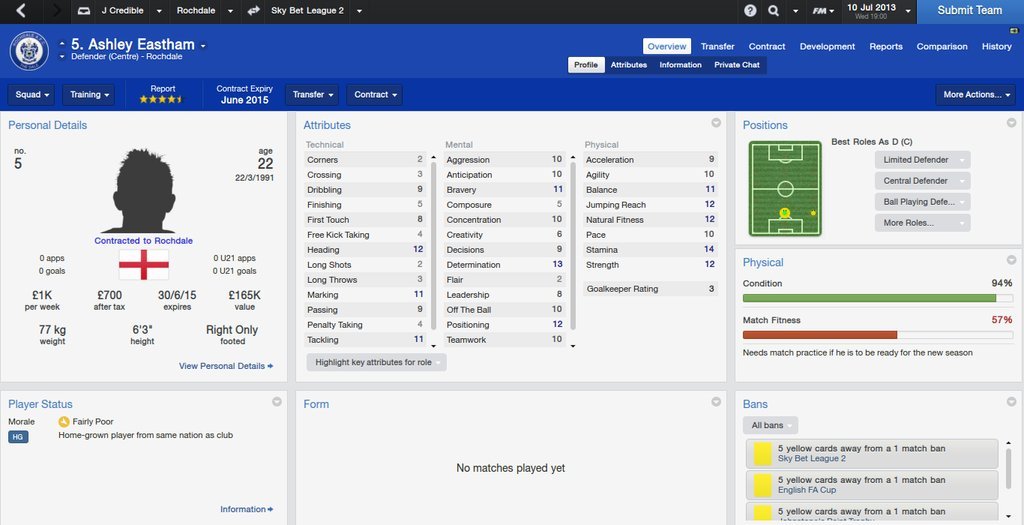 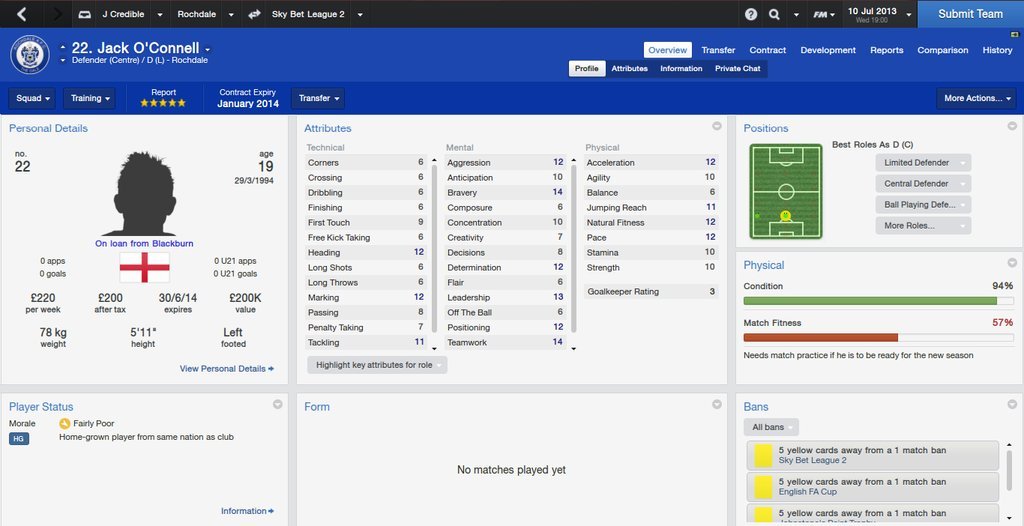 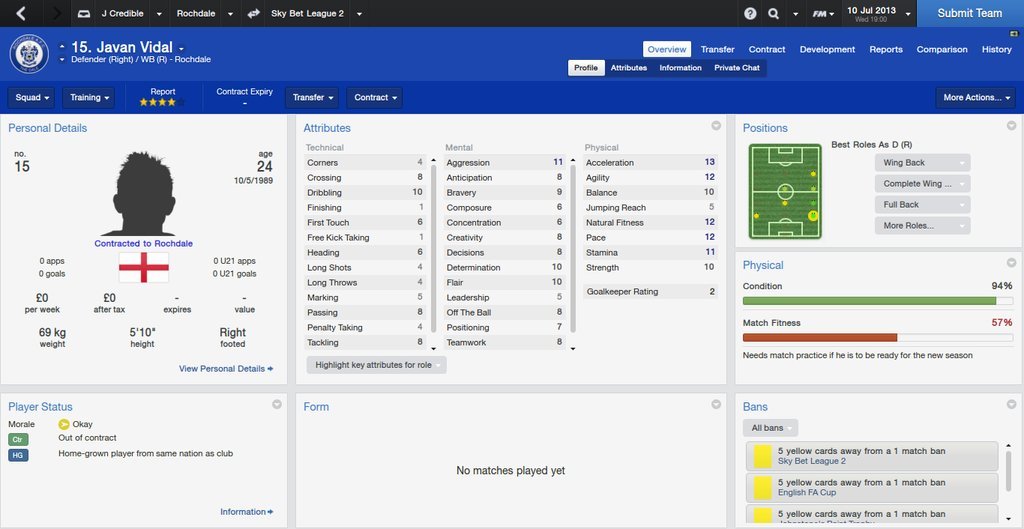 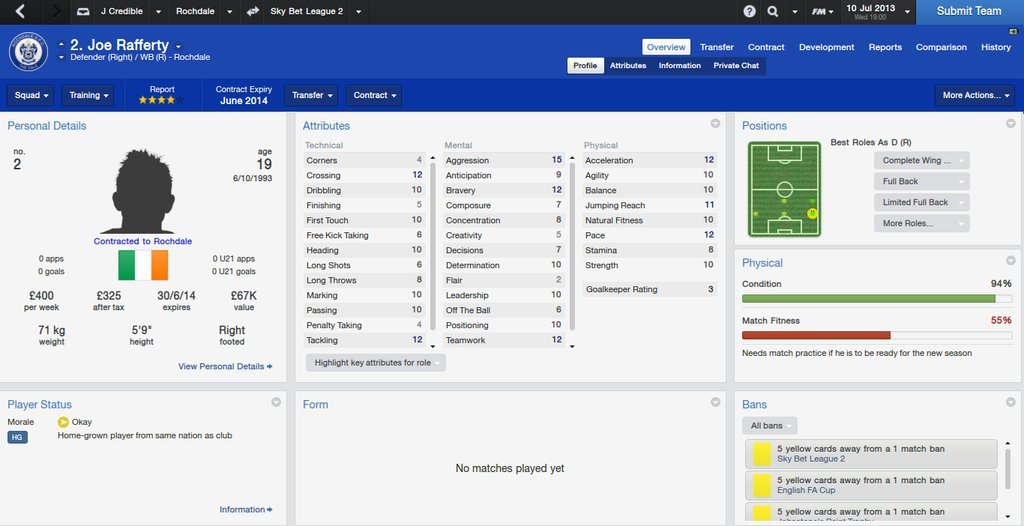 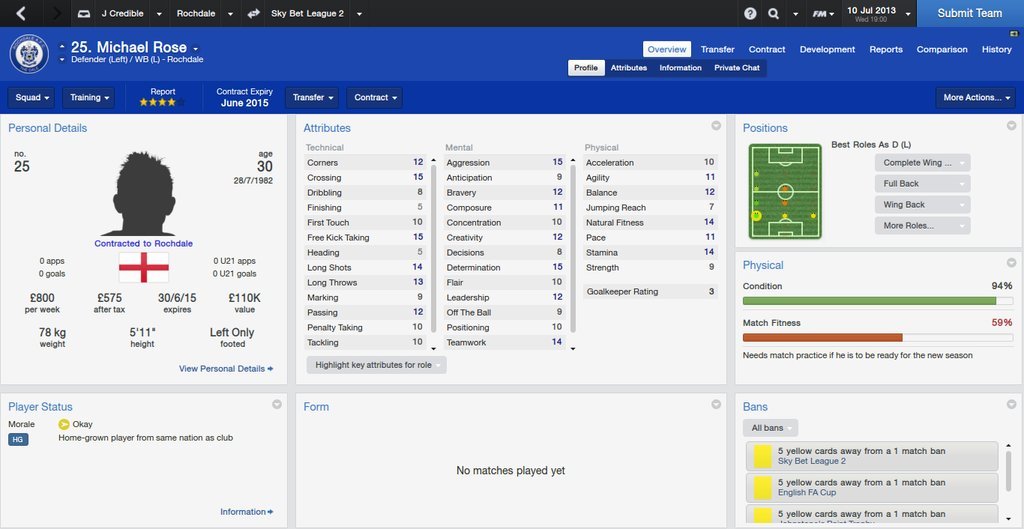 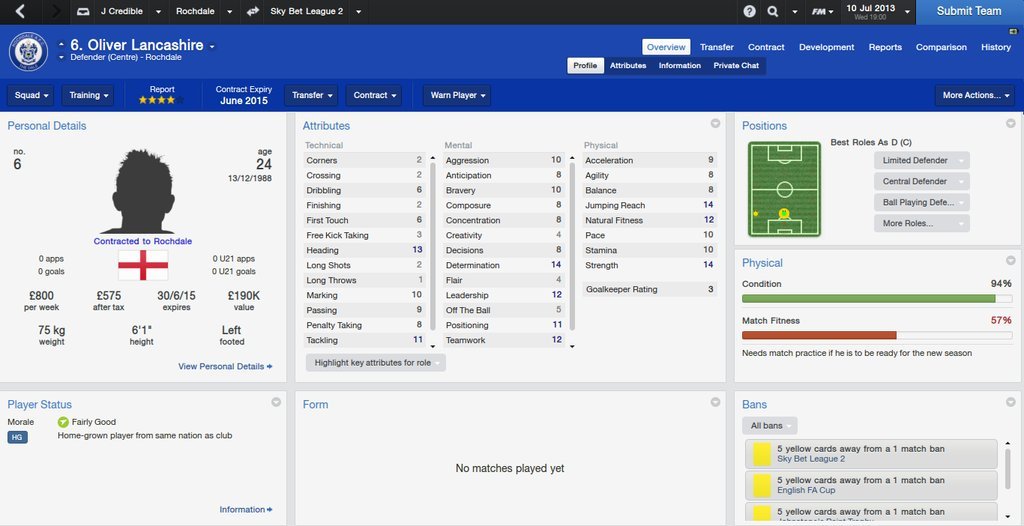 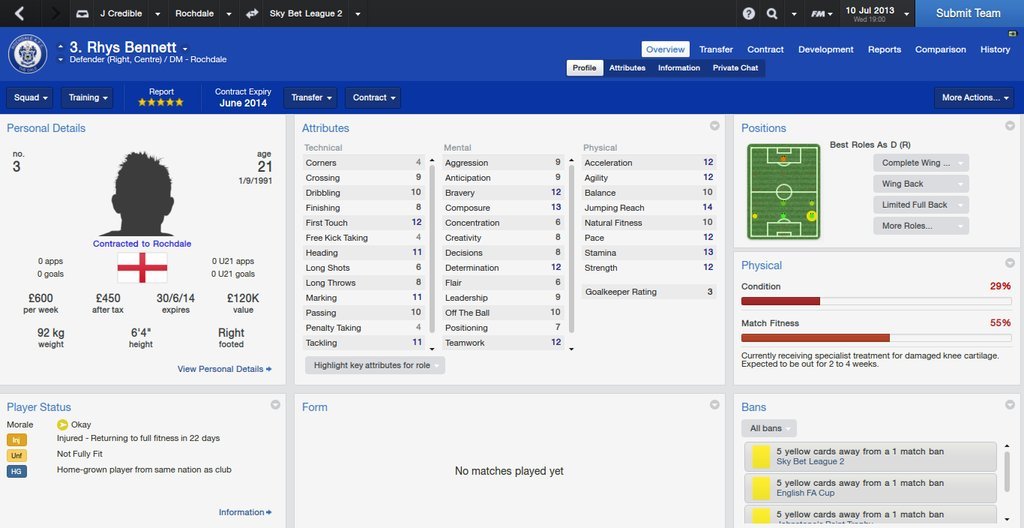 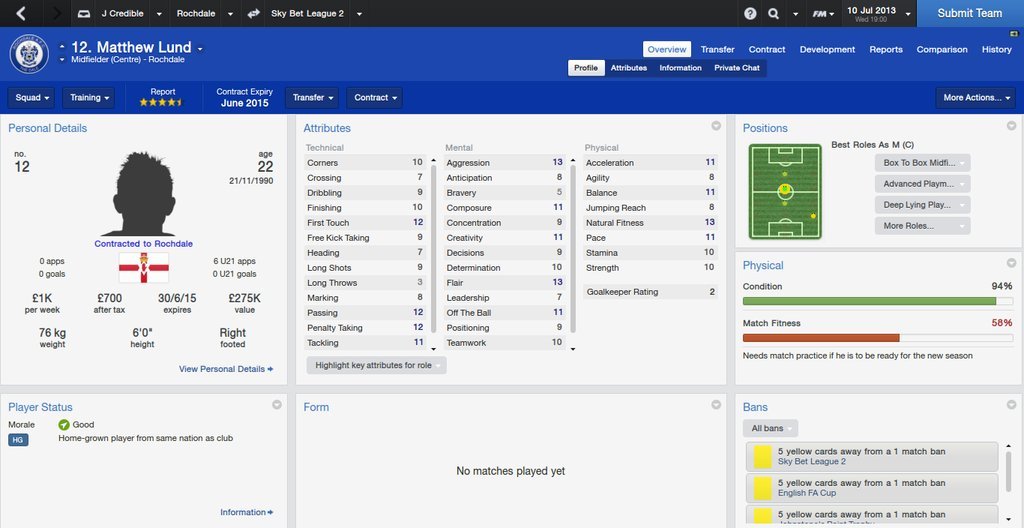 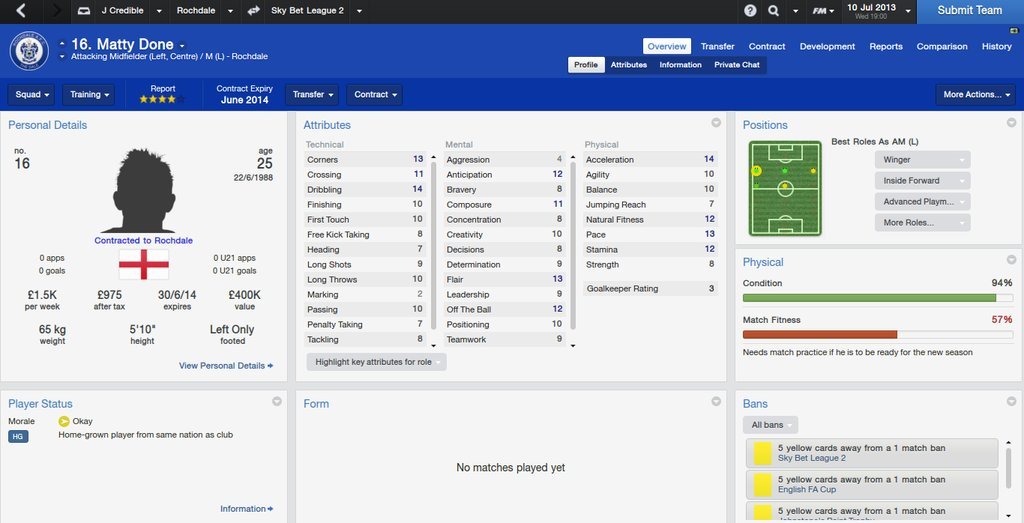 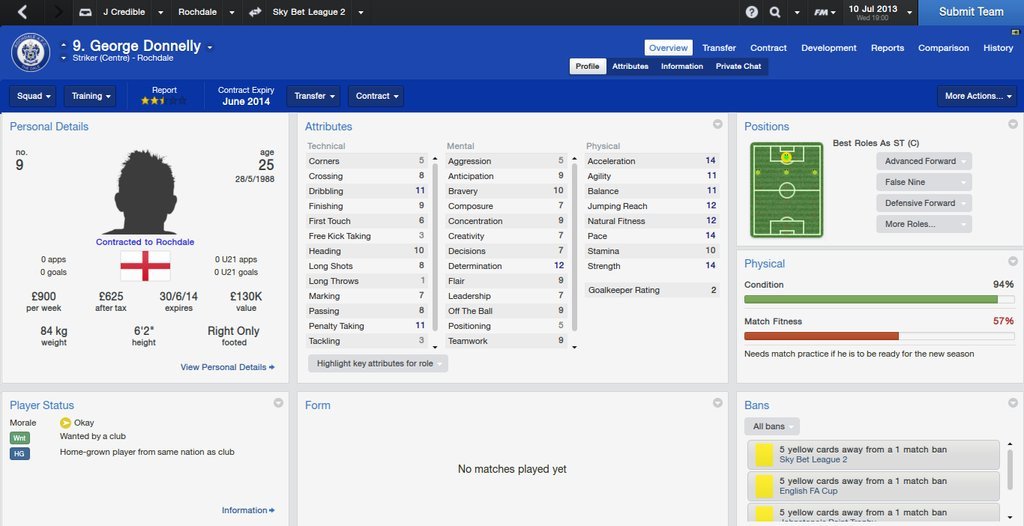 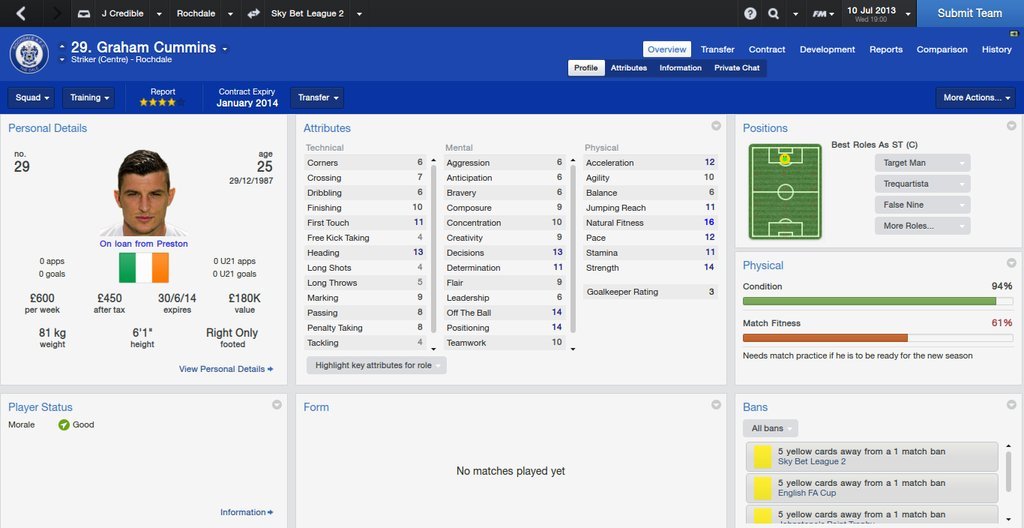 Most of the players have the potential to be playing in the Sky Bet Championship which is two leagues above where they are right now, all I need to do is to motivate them to work hard before every game and achieve promotion this season. They think it's impossible... my job is to change that around and give them the self-belief they need. I doubt I'll sign any players this season because I'm fine with the squad but that could change once I've played the friendlies.

AlexTHFC
9 years
This is looking great so far... love the name and keep up the good work!
1
Login to Quote