Thanks man! I hope it works out well
Login to Quote

Some pretty good signings as well!
Login to Quote

Some pretty good signings as well!

Thanks I hope they do well.
Login to Quote

JasonRM
9 years
Great story so far mate, I'm loving the way all the graphics make the story so realistic. Great win against Blackpool too!

Its getting even better

Everton Stunned as Middlesbrough get the draw

Everton had their midfield to thank on a crisp winter's afternoon at the Riverside Stadium as they showed their strikers how to finish.

Winger Ross Barkley gave Everton the lead with a deftly executed from long rang in the 13th minute. Later on Everton's winger Steven Pienaar would get a red card for unsporting behavior in the 19th minute. With 10 men left on the pitch Everton surely looked concerned.

"I knew as soon as Pienaar received his red card, we had the advantage."- Middlesbrough Manager Doug McKenzie.

Boro's new striker Lassad equalized in the 28th minute with a well timed close range finish. An error from Boro's defender George Friend caused Barkley to score again. With seconds remaining in the match Lassad would once again get his name on the score sheet as he knocked in a header from six yards out.

For Everton this was a disappointment but for Middlesbrough supporters they will be delighted. The two will face off in a replay on 5/2/2014 at Goodison Park.
Login to Quote


Yep lol. How about that Rooney pic? lol
Login to Quote

January has been the best month for Boro since McKenzie's tenure began in November. With only three league matches the guys needed to have a good month. The only blemish was the match against Charlton where we lost 0-1. At the end of the month the club finds themselves in 14th place with 35 points.

"We are getting to a point in the season where every match matters and a loss like the one against Charlton can really hurt you in the long run."- Doug McKenzie

The club during this month welcomed four new players during the first few weeks of the Winter Transfer Window.. Both Lassad and David Bentley joined the club on free transfers. Also with the partnership with 2013 Barclay's Premier League Champions Man Chester United, we were able to add two players on loan, Tyler Blackett and Larnell Cole. Marvin Emnes would move to Reading for £2.7M.

One of the highlights of the month was the FA Cup Campaign. It started with a victory against relegation threatened Blackpool. Striker Lukas Jutkiewicz would be the man of the match scoring the only goal. Later on Boro faced their toughest opponent this season, Everton. Newly signed attacking midfielder Lassad would help the club get the draw. 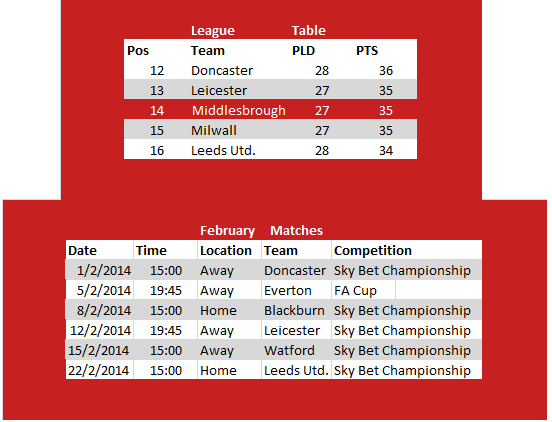 February will be a great month for the club as they will face Everton in the replay of the FA Cup and face clubs such as Doncaster and Blackburn. Stay tuned next month for a special BORO+ episode featuring Doug McKenzie as he talks about everything from personal things to management.
Login to Quote