This time last year I was a member of Toronto FC and never thought that in a million years that I would be managing a club such as ours. On that fateful day in November things changed for the good. This past season has been a blast and I like all of you are looking forward to next year in the Premier League. I promise we will NOT GET RELEGATED. You can trust me your manager who gave you the 2013/14 Sky Bet Championship title.

From the outset promotion was the number one priority, but we thought it would be in the form of a playoff. Nothing has really changed except for the fact I want us between 10th and 15th in the upcoming season. It's our aim to ensure that this goal will be accomplished by May of next year. Sadly though last year we were knocked out of both competitions. For this upcoming season I would like to go farther and try for a victory.

Of course winning the Championship has lead to so many new things. Having the opportunity to be showcased around the world is one of our main aims. By the end of the decade I want Middlesbrough to be a household name like Manchester United. On the Manchester United front we have officially broken the partnership with them since we are in the same league. Thank you Mr. Moyes for the help.

The fans have been tremendous. At first you were all apprehensions about me joining but now you all welcome me with open arms. I will continue to communicate with you all via twitter. It really helps to see how our fan base feels and if I have to make adjustments I will. Also thank you for defending me in many articles in the English Press.

Many have been asking where are the new kits? Well I have news about them, we will be keeping the current style for this upcoming season. The board and I felt that it is unfair and against all things right selling a new kit every season. With the way the economy has been, having the same kits again will be good for everyone's wallet. We want to strive for the best interest of our customers and that means you.

I know I have said I want more people to attend and the crowd active at The Riverside Stadium, but it's the support like I said in the last paragraph that is helping our club grow. I can't wait to see you all travel to the away games. Our focus at Boro is the fans so this upcoming season I made a deal with our ticket office to give you all half priced tickets to each away match including the marquee ones. Hopefully I will see each and every one of you at the stadium this coming season on what will be another chapter in the Story of Middlesbrough.

pompeyblue
9 years
Really nice update, hopefully you will have a good season

Today we will be previewing our fourth club in this year's version of 20 clubs in 20 days. These guys are no strangers to Premier League action and will return to the top flight for the first time since the 2008/09 season. They are Middlesbrough FC who are the current champions of the Sky Bet Championship.

For those who do not know about Middlesbrough here is a little information about the club. Founded in 1876 Middlesbrough also known as "Boro" play at the Riverside Stadium located in Middlesbrough. Their rivals include Newcastle United (Tyne-Tees Derby) and Sunderland (Wear-Tees Derby). The club has one Capital One Cup which they won it in 2004.

Boro have a few impact players that should be their go to guys. They are Lukas Jutkiewicz, Lassad, Charlie Mulgrew and Jason Steele. Jutkiewicz last season lead the Championship and the club in scoring. While goalkeeper Jason Steele had a streak of five games without conceding a goal.

Manager: Only 27, McKenzie has already shown that he could manage in a high quality league. The ex TFC coach came to Middlesbrough last November when Tony Mowbry was sacked. He surprised many in the English Media when he lead the club to a 15 game win streak that helped them move from 17th to 1st in the table. Now this season we will see if he is truly ready or not. The step up from the Championship to the Premier League is huge and can destroy a new managers confidence in no time. Will his 4-2-3-1 work against the big boys?

Outlook: Middlesbrough have the talent to possibly stay in the premier League but will coaching make or break the squad. If they can acquire more depth by the end of the window I can see they might survive. A few days ago McKenzie hired Eric Cantona to help out, we see this as a positive in the right direction.

Prediction: 18th. Close but will struggle all year. Coaching and lack of depth are the issues.
Login to Quote

shylax
9 years
ProSoccerTalk. XD It actually does read like an actual ProSoccerTalk story. It's going to be hard because you don't have as much money as the big boys but I'm sure you'll survive this year!

Sadly, I can't critique your transfers because I know who none of those guys are. 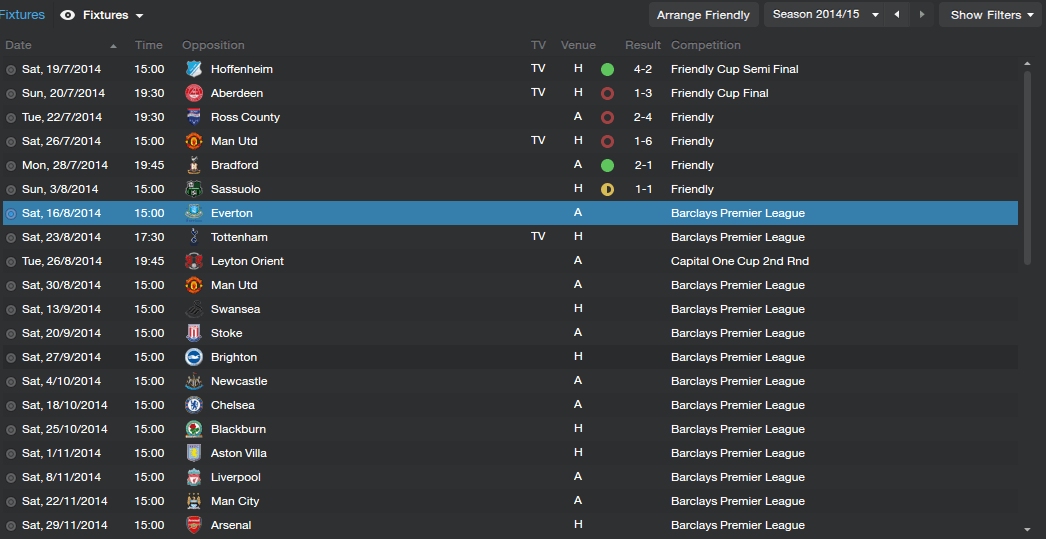 2013-11-21 18:32#145363 ebEliminator : ProSoccerTalk. XD It actually does read like an actual ProSoccerTalk story. It's going to be hard because you don't have as much money as the big boys but I'm sure you'll survive this year!

Sadly, I can't critique your transfers because I know who none of those guys are.

Tell me about it. I am using a bunch Italian dudes on loan. You will see all transfers later on. If we survive it will be like a Miracle on 34th Street lol
Login to Quote

It was Middlesbrough's first match in the Premier League since being relegated a few seasons back. They were eagerly looking to cause an upset at Goodison Park aginst Everton. Last season these two faced off in the FA Cup Fourth Round where Everton would win in the replay. The final score would be 4-2 thanks to Nikica Jelavic and his two goals.

Midfielder Darron Gibson got Everton off to a flyer by scoring a powerful long range strike in the 6th minute. Middlesbrough would equalize thanks to a mistake by Keisuke Honda. The goal would be scored by Emmanuel Ledesma. Jelavic would then put Everton back on top as he scored a header in the 61st minute. Three minutes later he would score on another header. An error from Middlesbrough's Jacob Butterfield allowed Seamus Coleman to score an effort from range. In the 86th minute Ben Gibson would score Middlesbrough's second and final goal.

Overall it was a good effort from Boro even though they were heavily picked as underdogs. This team will struggle all year but I see them working hard all season.
Login to Quote

Welcome to the 29th of August episode of Coaches Corner here on talkSPORT. For this weeks segment we are talking with the manager from the newly promoted Middlesbrough. This upcoming weekend they play Manchester United on the BBC Match of the Day.

"Welcome to the show Doug how are you today?"
"Great it is nice to be on the show."
"Well many have pick your team to get relegated what are your thoughts?"
"I really do not like to read the media due to the negativity but to answer your question, it's going to be a hard season but if we can get a few results to go our way I see us staying on top."
"Well we all know how some managers and chairmen have different relationships, what is yours with Steve Gibson?"
"We have a good relationship, now I am not trying to blow smoke up his ass and say we are best friends, there are some things we disagree on but everyone has that problem."
"We know you have very limited finances how has that been?"
"This is where Steve and I have the most confrontations, this club needs better players and I know he has the money but it sucks having to rely on a bunch of frees."
"Sunday you face former parent club Manchester United, are you ready?"
"We are as ready as we can, now I doubt we will win and the guys know that, our goal is to get a draw and have people talking."
"What was your relationship with David Moyes like?"
"Honestly screw him, he is nothing but trash. He was like that dude trying to get in a chicks paints, at first all nice and friendly later on you see his true colours and motivations, David gave us some worthless players that had no chance to play much. Also his goal was to raid our club so......he can go to hell for all I care."
"So no handshakes then?"
" I mean I will if he offers because that the proper thing to do but i will never go to a BBQ if he invites me to one."
"Well thanks for the interview Doug, good luck for the season."
"Thanks have a good one!"
Login to Quote

Thanks!!
Login to Quote

pompeyblue
9 years
Great updates Bayern!
Unlucky with the game against Everton but I think you will survive in the league this season.
Login to Quote

Thanks, the next month gets better
Login to Quote