Jer
9 years
Totti <3 :D. Must be tiring to play and manage at the same time

Slid3Tackle
9 years
Great first matches mate, but also Juve have maximum points. It won't be easy to beat them so good luck!
Login to Quote

Neal
9 years
Pauker: Even at his age he's got the stamina for it

BayernAmerica: A couple more updates and we'll have one

AAN: Might be tough but I think we can do it!

ROMA TOPS JUVE IN CLASH OF THE TITANS

It was first against second when Juventus paid a visit to the Stadio Olimpico to take on high flying Roma, and it was a cracking match between the two top teams. Antonio Conte’s men had looked incredible over the last two seasons but have been faced with an early challenger in Totti’s men, and all of Italy was waiting to see how the sides would fare against each other.

Despite having scored an own goal after coming on against Verona, Michael Bradley was given a start in midfield over Marco Verratti for AS Roma, perhaps a defensive move on their part to help solidify against Juventus’ midfield maestros. However, manager and captain Francesco Totti had said before the game, “We will not look to drop everybody back and play ugly football. We will go out with confidence and win this match.”

Those plans were given a serious blow just a few minutes in, however, when Kevin Strootman went down grasping his hamstring. It became known later that the Dutchman had pulled the muscle and will miss 4-5 weeks of football because of it. Miralem Pjanic came on to replace him.

Approaching halftime, it seemed the two sides would go in level. Both teams’ midfields had been battling strongly and shown flashes of brilliance but had failed to create a clear cut goal scoring opportunity. However, it was a poor tackle from Giorgio Chiellini on Alessio Florenzi just outside the box on the left of the semicircle that set up Francesco Totti for a hit at goal.

The player-manager and of course legendary captain stepped up with confidence and whipped the ball over the wall and in off of the post, leaving Buffon stranded and resulting in wild celebrations in the Olimpico as the Giallorossi took an unexpected 1-0 lead into the break.

After the break, Roma came out slightly more defensively and looked to stop Juventus’s inevitable assault to search for the equalizer. The Bianconeri pushed many men forward and at times put the Giallorossi under great pressure, but they survived. As the last ten minutes came, the game began to open up once again.

The first chance fell to Juventus due to a moment of inspiration from Fernando Llorente. The big Spaniard took a delightful touch to bring down Pirlo’s trademark long pass before flicking the ball through to left wing-back Paolo De Ceglie. The Italian, one on one with Morgan De Sanctis, hammered the ball off of the crossbar, only for the play to be called offside anyway.

The Giallorossi almost scored straight after when Gianluigi Buffon made an acrobatic save to deny the on-form Alessandro Florenzi and keep the game alive. However, at long last, the referee blew the final whistle, and Roma came out the victors by a 1-0 scoreline after a brilliant match of football.

Francesco Totti, the manager, captain, goal scorer, and man of the match, said to the press, “This is a brilliant feeling. Juventus are probably one of the best teams in the world, and we’ve beaten them here today. We played with a lot of heart and commitment and we thoroughly deserve to have won today. We have to focus on our match against Inter now and continue to win games.”

After that early crucial match, Serie A looks as follows: MJK46
9 years
Good to see four wins in a row early on.
Login to Quote

Aaron
9 years
Meh, I beat them with Catania. What's the fuss?

Haha, you know I'm joking;) Great win mate, it will show the league you are not to be pushed around:P
Login to Quote

Radders2109
9 years
Going very strong in the league! Keep up the good work

Neal
9 years
Justice: It's still early days but I think a title run in may be possible

Radders2109: Cheers bud, hopefully we can keep up this fine form! 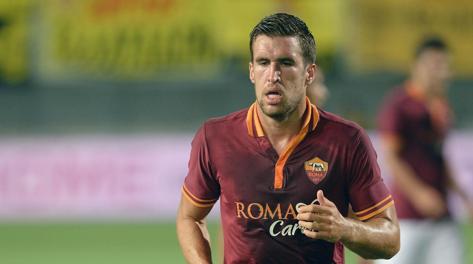 In what will come as sorry news to AS Roma fans, two players have been sidelined after suffering injuries in the previous league match against reigning Scudetto winners Juventus. Summer signings Kevin Strootman and Vasilis Torosidis are the victims, and they will be out for 5 weeks and 2 weeks respectively.

Strootman had to be replaced by Miralem Pjanic just 5 minutes into the 1-0 win against the Bianconeri when he went down clutching his leg, and it has now been revealed that he has injured his hamstring and will miss 4-5 weeks. The Dutchman had played in all 4 Serie A matches thus far, starting 3, and will be missed greatly by the Giallorossi. However, his absence offers opportunity to players like Pjanic and Michael Bradley who have not appeared as much so far this year.

Vasilis Torosidis had strained his thigh against Juventus but had not been subbed out, and will miss 2 weeks. The Greece international has thus far played second fiddle to Maicon, but due to earlier injury problems for the Brazilian fullback Torosidis had made 2 starts in Serie A. Torosidis has looked shaky at times, especially against Sampdoria, when two goals were his fault, but put in a very strong defensive performance against Juve.

“Obviously it is hard for a team to lose two good players, but we have the quality and the depth to continue to win matches and play well without them,” said Francesco Totti. “It is an opportunity for other players to prove why they should play, and when Kevin and Vasi come back there will be even greater competition.”

There is some concern that fitness could be an issue for AS Roma over the coming season; these two players are hurt, while Maicon had also sustained a light knock earlier in the campaign. Mattia Destro also started the season with a long term injury and will not return for some months; could injuries be the downfall of the Giallorossi’s potential title bid?

“It is nothing but poor luck,” reassured Totti. “Soon the lads will get back to fitness and we will have the full team available for selection again. In this regard it is nice to not have to worry about a competition like the Europa League and be bogged down my many fixtures; instead, we focus every week on doing well in Serie A.”

The Giallorossi continue their campaign in a few days’ time when they travel to the Stadio Giuseppe Meazza (also known as the San Siro) to take on Inter Milan in another high-profile match for the league leaders.

JasonRM
9 years
Unlucky with the injuries, but I'm still confident that you'll managed to beat the Nerazzurri at the San Siro!