Not losing any match was very important was we are still in first. Losing five key players is not so good. The big loss was Julio Cesar who will be out for a few months. This right there really hurt since Vigouroux is good but he is still young and makes mistakes from time to time. The best part of the month were the two matches aginst St. Pat's got us to return to the AIC Semi-Final. 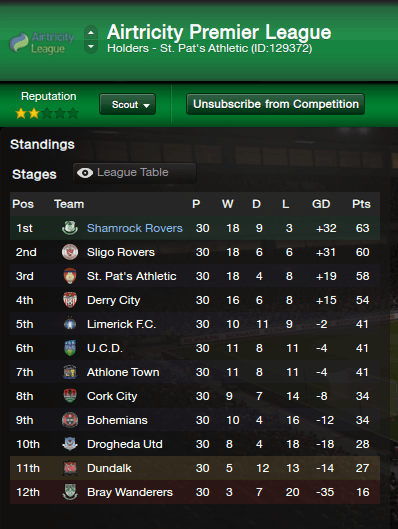 17 time Airtricity League of Ireland Champions Shamrock Rovers FC have just announced two major sponsorship deals that will help improve the club's visibility around Europe and the world. Chairman Johnathan Roache just recently signed off these deals. The companies are Eircom and Under Armour. Irish telecommunication giants Eircom and Shamrock Rovers have announced a partnership that will last for 10 years and will be featured on the clubs uniforms as well as other merchandise Eircom is not new to football in Ireland. Previously the company was the sponsor of the League of Ireland and the National Team.

Next American Sportswear company Under Armour will become the clubs new kit supplier. Starting the 2015/16 season the club will be in all Under Armour. The company based out of Baltimore Maryland is becoming a powerhouse when it comes to sportswear. With their designs Under Armour are one of the most technologically advanced kit makers on the market.

Shamrock will continue with Umbro for one more season.
1
Login to Quote

A decent month where we still kept the number one spot. The only bad thing was the loss against St. Pat's in the semi of the FAI Cup. In the All Ireland Cup we advanced to the final after a 4-2 aggregate victory over Cliftonville. So now all that is left is the final vs Sligo on the 17th. Oh in league we have one more match. If we beat U.C.D. we win the league. If we get beat and Sligo wins their match then we come in second. 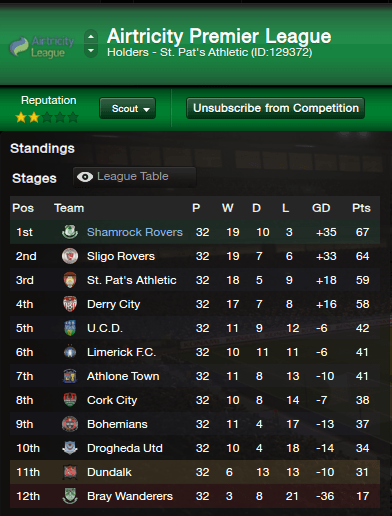 DUBLIN- on a fine afternoon in the Irish capital two teams faced off. League leaders Shamrock Rovers will travel a few miles the face U.C.D. Shamrock would be the victorious team, as striker Sylvan Ebanks-Blake netted two goals to give the Rovers the win.

The win gives Shamrock their 18th league title and their first since the 2011 season. The club was predicted to be the champion during the preseason. They delivered and have really shown why they are Ireland's most successful club. The season was not as victorious as the league was. They failed to win both the FAI Ford Cup and the EA Sports Cup. Yet Shamrock still have a chance to win one more trophy this season. They will be facing Sligo Rovers on 17 May for the All Ireland Cup final.

This championship was Michael Korrigan's first title in his professional coaching career. The American during the club last May, right after manager Trevor Croly step down. Croly was later on rehired as a manager for the reserve squad. The young American at only 27 years old was able to play the market well. The vast majority of his signings including league leader in goal scoring Sylvan Ebanks-Blake came to the club on free transfers.

Shamrock are the early favorites for next year's title. The club has already made agreements with several well-known footballers from all over the Irish and British Isles. They will be bringing in names such as Richard Dunne, Stuart Holden and Samuel Galindo. With squad bring in so much experience next season the club will be favored to win every other competition and Ireland. The club also gets a chance to return to Champions League as they will be entering the competition in the second qualifying phase.

With this victory in squad manager Michael Korrigan's name could become very popular in the coming months with the open vacancies in the Football League.
Login to Quote

Pompey Thanks man, the journey towards European glory starts soon!!
Login to Quote

As Shamrock Rovers have just won their second straight All Ireland Cup we here at the Football Association are proud to announce the award winners for the 2013/14 season. In a historical year that saw a change in schedule, we got to see many things including another title by Shamrock. Here are the winners..

Neal
8 years
Great work winning the league, keep it up!

Oh my oh my, last season was one of the great seasons ever, at least for me. I'm a little disappointed on the fact that we were not able to win out in the two major cups that we got knocked out of. It's a shame that happened because the squad really really could've won everything. At the end the victory of the All Ireland cup was extremely special. It feels good to know you are the best team between both countries on the island. Can you say three-peat!

One thing I would like to talk about is her new kits. This is the last season with the Umbro contract until we start with Under Armour next year. It's going to be a shame once the contract with Umbro is up. They have some classiest kits and designs out there. Our home shirt is loosely based off of the Paris Saint-Germain redshirt from a few seasons ago with our traditional gray and white hoops. Next our away one of the national teams kit from a few years back, it features a black and green stripe on the side of the emblem. Finally our third shirt which will be used mostly during European play is black and green that is loosely based off of the black national team shirt. All three shirts have our new sponsor Eircom featured on the front.

This off-season has been really kind to me. I was able to head back home to America and relax for a few weeks since I honestly have all the transfers done. A few might happen before the window shuts at the end of August, but making those deals during the season was probably the best decisions I could have ever made. Even the British press and other major footballing and sport media are getting a hold of what I do. I call this money ball 2.0.

Money ball 2.0 is probably the greatest invention ever in the history of football and sport. As you know here in football it's all about the younger, faster, exciting and marketable athlete. Will honestly right now Shamrock there is no way in hell that we'd be able to get those type of players that have the big names. So that's why I devised a plan called money ball 2.0. So basically the runs like this, find him good players who are either past their prime or decent youth that were passed over by the clubs and sign them. Due to the fact that the club and the league are not that high on the list this is perfect. The key to this is to sign them as soon as their contracts are running out.

Do you want to know something funny as hell? Half the guys from the Academy squad were let go ha ha ha ha ha ha ha ha. Yeah you might think with the fuck is he thinking, well most of them were too shitty to even make the squad. Luckily we are improving our Academy so this doesn't happen. I don't want to be seen as a team that only goes for outsiders, youth of Ireland is the key.

So that the season is almost here. Our first match is a friendly against good ole Derby County. Aside from Derby we get to face Port Vale, Exeter and Burnley. This test against English clubs will help prepare us for the season as well as Champions League. This will be a very important preseason since I need to figure out who works together and will formations the guys can be extremely successful with. I will be testing out a new secondary formation that we can use. It will be a variation of the 4-2-3-1 with no defensive midfielders and a fluid all out attack. If this tactic becomes really successful, I might put that of the current one that was used last season.

After that we get the play in the Irish Shield. Don't ask me who we are playing because I cannot remember. I know is it's going to be us will be victorious. Ah Shit now I remember... It's those bastards from Dublin, St. Patrick's Athletic. They were the one team that really gave me a headache. They're so good that I'm going to enjoy future derbies but I still can't get over the fact they beat us in penalties during the FAI Cup.

Finally like to talk about how bad as the fans are. The Shamrock Ultras are the greatest thing for this club's fan base. They keep things fresh and travel all the time no matter where the hell we are. During her first training session they had a few awesome banners on display. One said welcome back Mike and the other said, COACH MIKE IS A PIMP, I'm serious coach Mike is a pimp that is probably the greatest thing I've ever seen life. These guys know how to party, they support that all of us and have been behind me since day one.

Starting 16 July we get to start Champions League this year we will be starting at the second qualifying phase. The team will be facing is Kazakhstan league champions FC Aktobe. Luckily we get the advantage of starting out at their home stadium. As I seen in the past is pretty hard to be a team inside of Eastern Europe. Hopefully we can get a good result and want to the next round. Realistically I believe we will be in Europa League later in the year. I feel we can make the group stage and that competition. Making it past that around will be extremely difficult.

May the 2014/15 become one of the best seasons ever for Shamrock Rovers. THIS IS OUR YEAR... We are going places baby!!! Oh one more thing. I have decided that I will be journaling or whatever the hell is that thing the kids are into these days. Later skater!!!
Login to Quote