Season One: Player of the Season 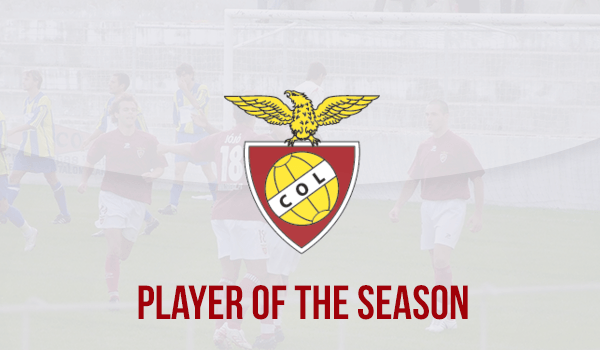 Fan's Spokeperson Daniel Almeida:
This season for Oriental was nothing short of brilliant. We raced to the title comprehensively and we had lots of standout players in the team, too, who helped us get to where we are now. We've drawn out the top three players of our season so far and are here ready to present them here to you... 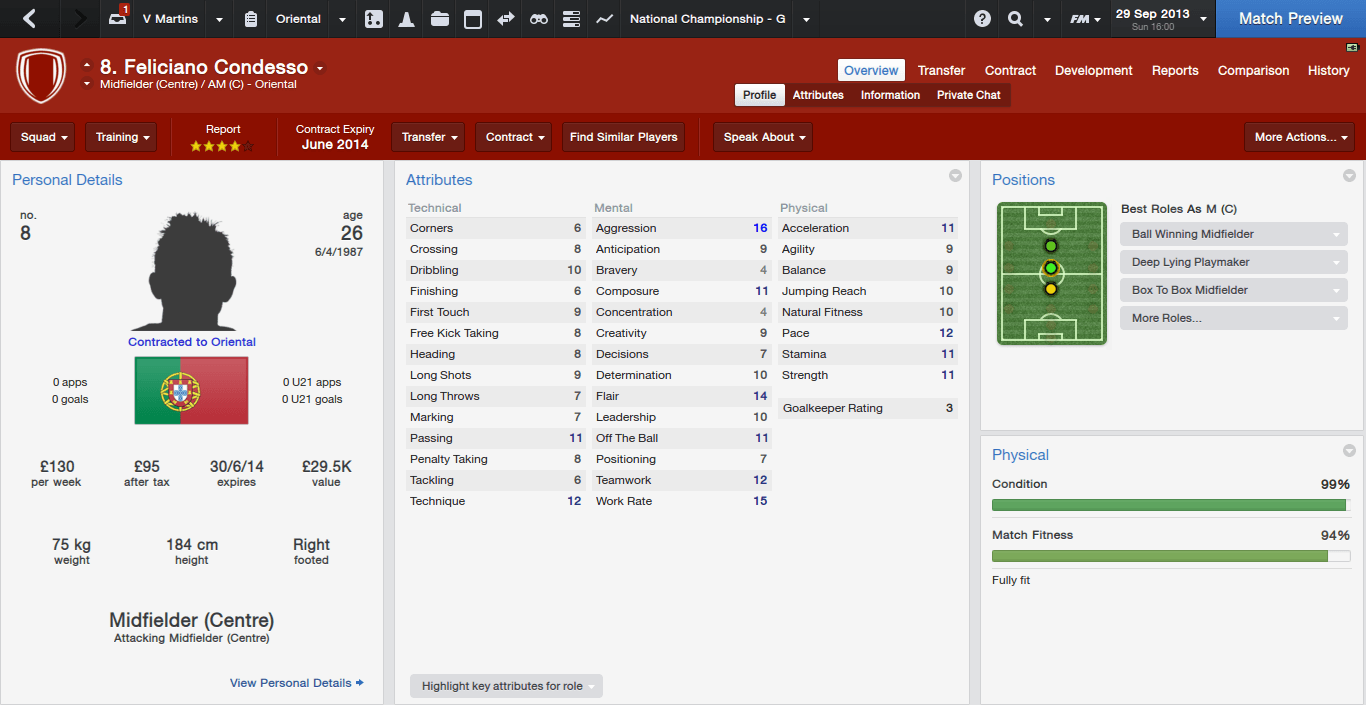 Feliciano Condesso can be attributed as one of our best players this season. Surprisingly he was given no official Player of the Matches but in my eyes he was one of the main reasons we ticked last season. Operating as a box-to-box midfielder he did excellently and worked tirelessly. 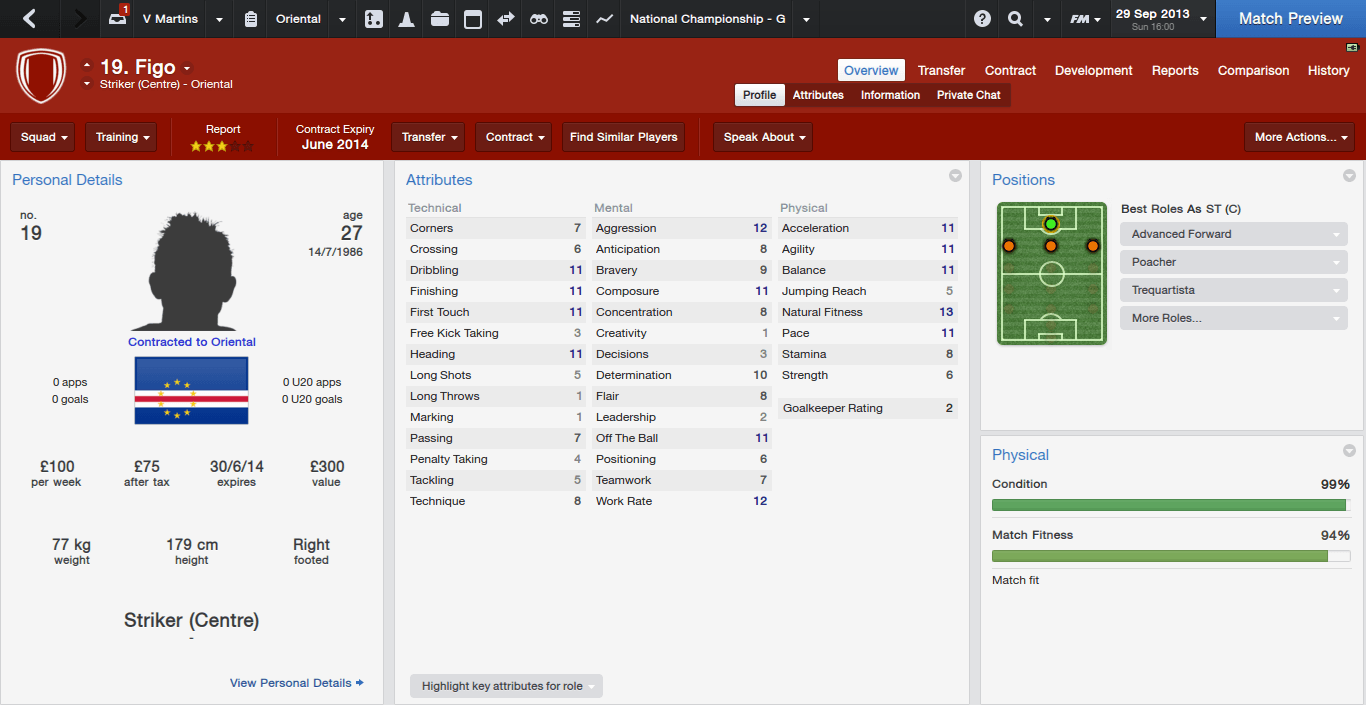 Figo played an amazing role in promotion. One of the keys to lower league management is guaranteeing you have a player who can score goals on a regular basis. Thankfully, we had two and Figo is just half of the Cape Verdean connection!

Balack completes the Cape Verdean connection. He and Figo combined to score 40 goals together, a phenomanal hit rate. Balack is definitely someone I'm going to keep around next season! *Unfortunately something messed up Balack's history and most of his stats other than the ones I got disappeared

Tiago Mota was our main threat this season. He deservedly won the Fan's Player of the Season and he won mine too! Not only did he contribute 17 assists from right wing this season he added 10 for himself. Infuential week in week out, he boasted an average rating of over 7.40!

Well, there you have it! It really has been an absolutely remarkable season. There have been lots and lots of highs, and we really have shown that we can be a great club in the future. That elusive goal of becoming a Primeira Liga team is still there, this is just the first step to success. We now know, however... that we're One Step Closer
Login to Quote

Feliks
6 years
great work mate, it must have taken ages!
1
Login to Quote

Josh_MU
6 years
WOAH. I absolutely love this update Walter, really nicely presented, love the use of the icons for goals, assists etc! Very good season with some exceptional performances!
1
Login to Quote

Nick
6 years
Love the layout, Heisenberg - it's tight. Tiago Mota absolutely beasted it for you :o
1
Login to Quote

Jack
6 years
Some great work on this update, keep it up! Amazing story!
1
Login to Quote

Walter
6 years
fmzemdegs Thanks it did take a while

Josh_MU Thanks for the kinds words

Nick Cheers Nick, and yes he did!!

Jack Thanks for reading Jack

Season Two: Down To Business!


The new season is approaching us and if we're going to continue to build on our fantastic first season we know we cannot just sit and rest on our laurels, we need to be prepared. We have some very tough teams in this league. Relegated teams include Rio Ave and Académica, whereas other teams like Portimonense and Beira-Mar are yo-yo teams and regularly find themselves in the top division.

Other tough teams that are regularly in the higher reaches of the league could be a big challenge to us, so anything above the three relegation spots is fine for me!

This window had to be busy for us. We had so much to prepare for in our new league and signings were the first step in creating a side that could stay up. We had to get what we needed against what we saw, and that meant choosing our signings very carefully and remaining financially intact in terms of being under the wage budget, something the chairman had not forgotten to remind me about.


We made many signings that could improve our team but not wreck team chemistry or morale. Here's some of the key signings we came away with (alot more were made). 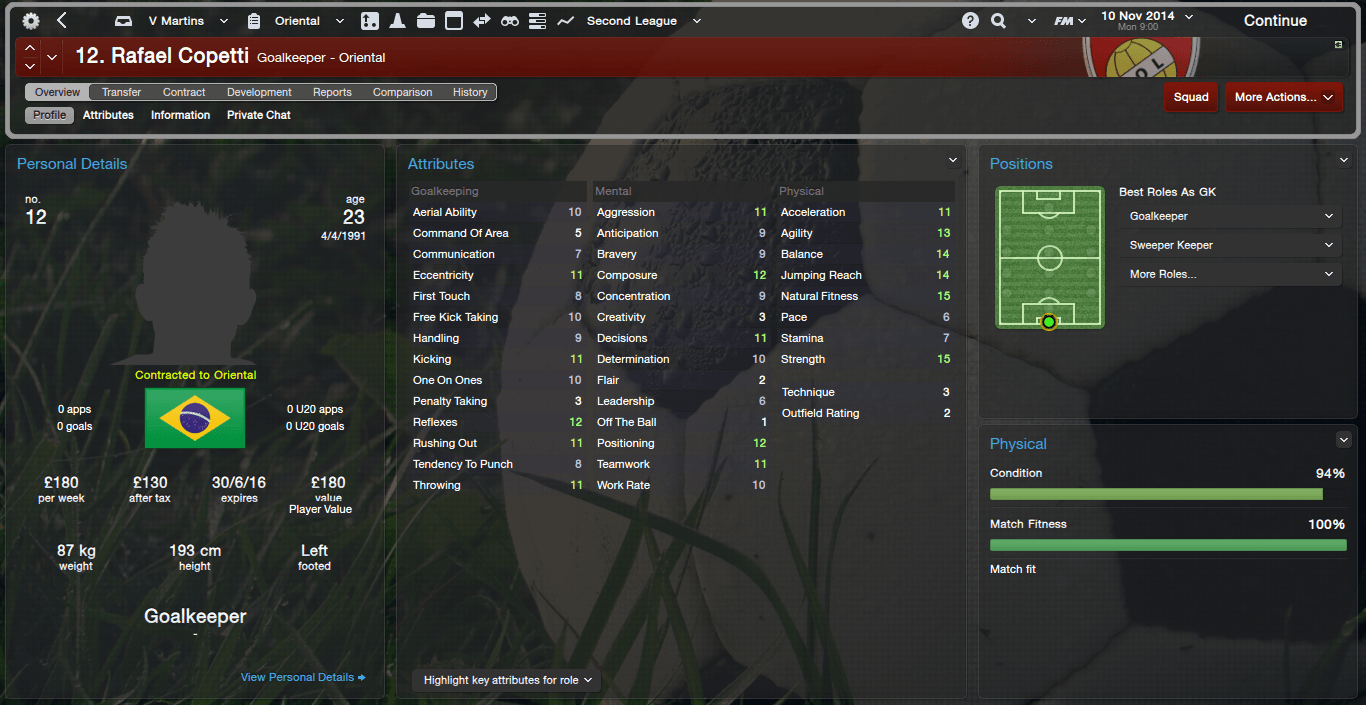 Rafael Copetti is a promising young keeper. His best attributes are his strength, balance and positioning. As well as having these great attributes Rafael is still only twenty-three, meaning we've got years to develop him and mould him into the player we want. He and Tiago Mota are evenly matched ability wise so it will be interesting to see if that sparks some good performances. 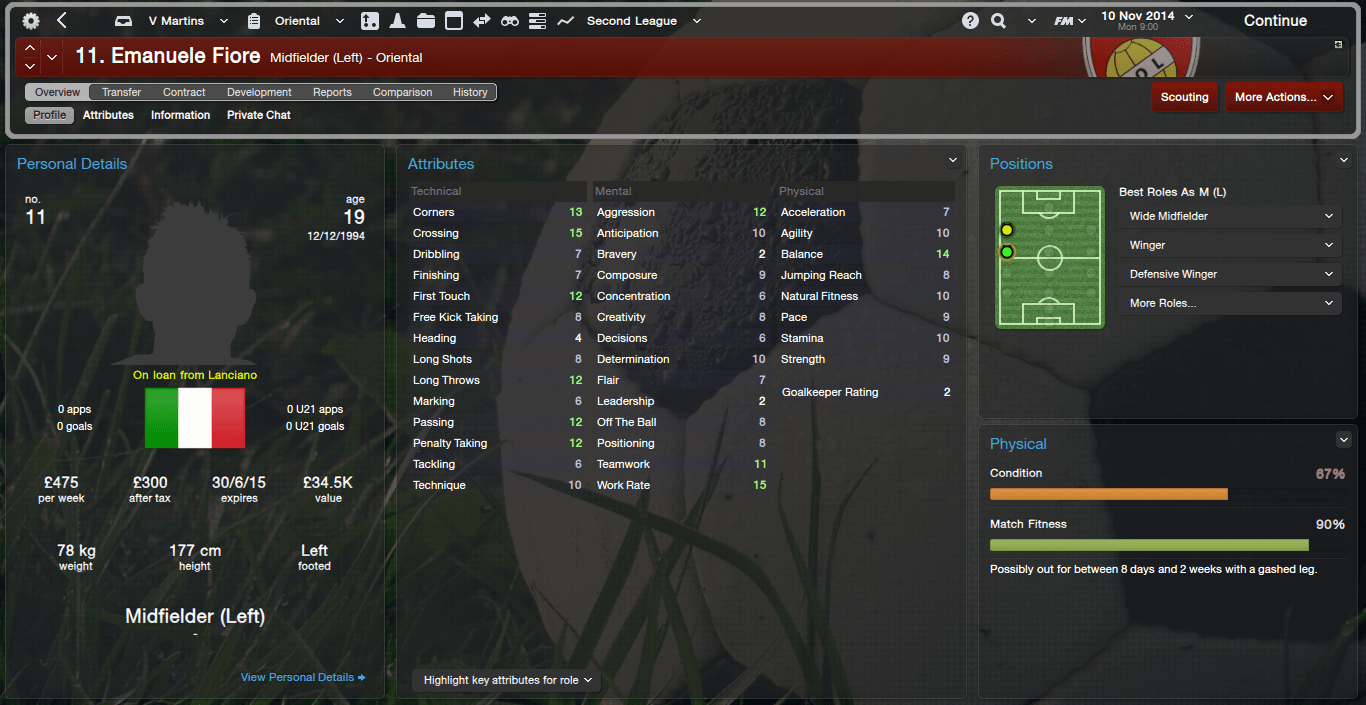 Emanuel Fiore is an Italian winger/wide midfielder who will assume the left midfield position in the team. He's able to cross and pass, and will work all day. Despite this, his pace and stamina are a worry, but it's not like we can't work on that and try and improve it. After the season we will assess whether he will still be apart of our plans. 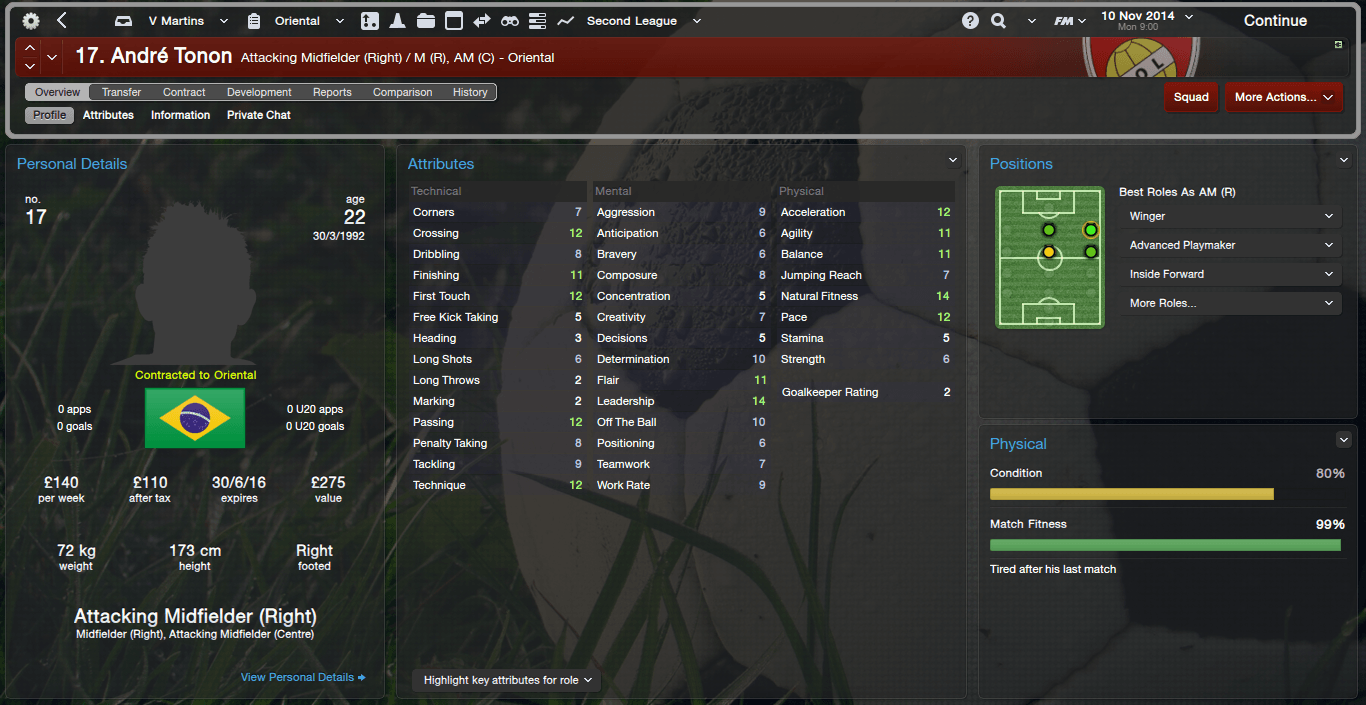 Young Brazilian winger André Tonon joins from Moura and will be backup to Tiago Mota on the right after Nogueira's contract expired. He's quick, can cross and finish - and he's still got time to develop. Could be sold for profit in the future, or if we develop him correctly he could be a very good player. We will have to wait and see! 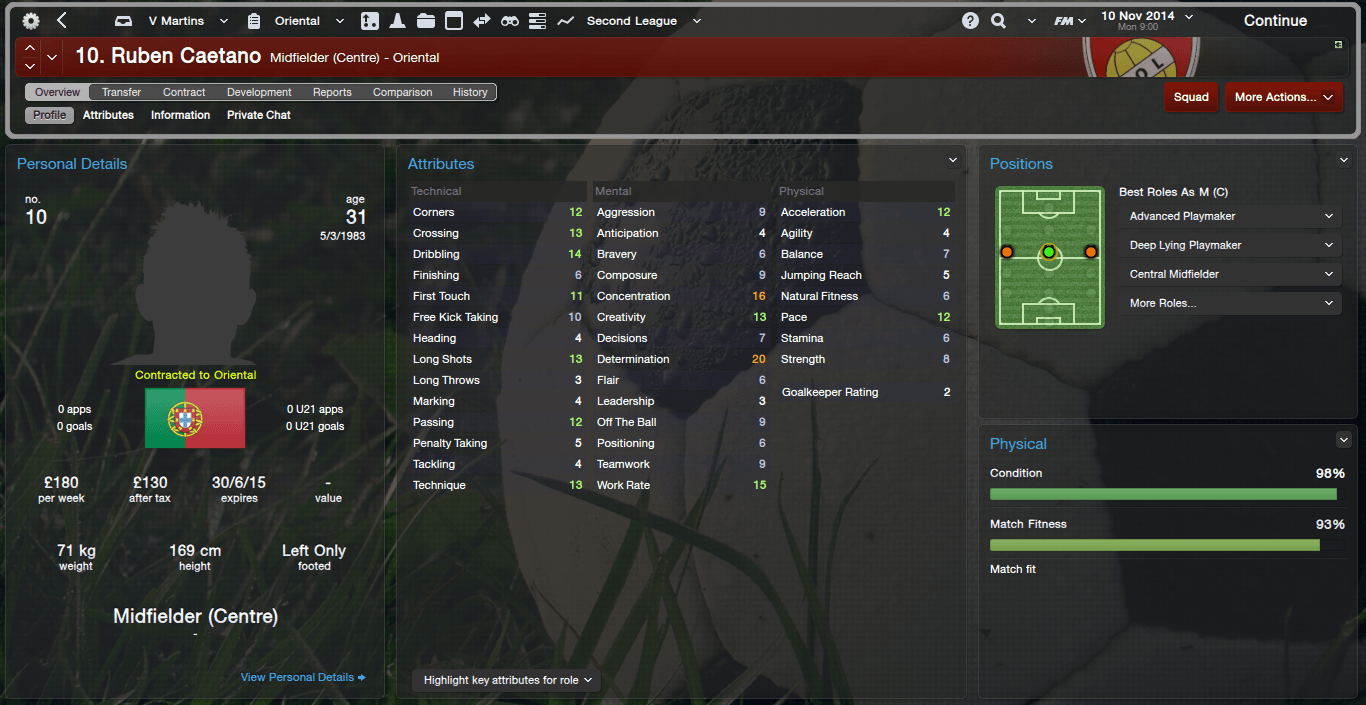 What Ruben Caetano brings to the table is a driven personality and a sharp mind. As well as this, he is a rare player in our team over 30 - which can be good for us. This experience and his great technique are something we will need very much in the league next season. He and Feliciano Condesso will more likely than not be the two midfielders in the middle, Caetano acting more as a playmaker.

Here are the rest of the signings

Due to my lack of organisation - screenshots come at a rarity. The two crossed out are signings made in January and will be announced later.

That concludes our preparation for the new season. We are going to adopt a counter attacking philosophy because we know a lot of the teams in this league will be much better passers of the ball, controlling the play etc. If we can hit them on the break with pace and accuracy, we can snag a few upsets!

Next update is on preseason. How did we fare and will it be enough? Stay tuned.
Login to Quote

Josh_MU
6 years
Some good players there Walter, I love your superb editing skills with the red lines and all

pompeyblue
6 years
Some good additions to your squad there, hopefully they will have a big impact this season

Cheers AAN, hopefully they produce the goods!
Login to Quote