http://danlynch.org/wp-content/uploads/2012/09/BrendanRodgers1_1519872a.jpg
Brendan Rodgers unexpectedly announces his departure from Liverpool and leaves the fans at Anfield shocked.


Brendan Rodgers steps down from his position as Liverpool's manager and the fans are left stunned. The reasons behind Rodgers' sudden parting remain unknown at the moment but rumors claim the Northern Irish manager and ex-player quit after a major letdown by the management, following the sale of Liverpool's star and ex-striker Luis Suarez for Barcelona.
Suarez scored 33 goals and created more 21 goals in just 33 appearences last year for The Reds in Premier League and has finished as top goalscorer of the league and jointly shared the European Golden Shoe with Real Madrid's Portuguese star, Cristiano Ronaldo.
Despite the heavy punishment received for an unprofessional act during Uruguay's game against Italy when he bited Giorgio Chiellini, Suarez was still in the plans of Brendan Rodgers for the upcoming season with expectation he will be as lethal as last year.

According to a sources in the club, the Northern-Irish manager has had many talks with the management regarding the negotiation with Barcelona for the international Uruguayan footballer but apparently his requests were rejected and Luis Suarez was sold which led to a major incredulity between the sides and made Rogers to take an unexpected decision such as leaving Liverpool after a successful season when he led The Reds into the 2nd places, 2 points away from the championship Manchester City.

Following Rodgers' departure, the future in the red side of Liverpool is unclear as of now and a replacement needs to be found, and the fans expect and hope that the successor of Rodgers will do as good as him or even better.
The media reports that the former player of the club, Sami Hyypiä, is one of a few candidates to takeover however André Villas-Boas and Rafael Benitez are linked to manage the red-side of Merseyside this season.

We all will be waiting for the club's announcement about the new manager of the Premier-League team.

Joe
7 years
Nice start mate. Good luck with this! Would really like to Hyypia as manager!
Login to Quote

Shanked
7 years
Seeing Vilas Boas give it another try might be interesting, gonna keep an eye out for this story as it seems promising.
Login to Quote

Coxy
7 years
Good luck and welcome to the site! Hyypia would be great to see!
Login to Quote

Can't wait to see you continue.
Login to Quote

Oz96
7 years
joethequin: Thanks a lot mate and he might take the reigns, who knows?

MCox93: Thanks and wait to see who takeovers.

basham97: Thanks for all of the help, respect.
Login to Quote

Jamesg237
7 years
I definitely recognise the title of the story...not sure where though

I hope things go well for you in the coming season.
Login to Quote Sami Hyypiä celebrates a goal in Anfield. He is now back to bring home the lost trophy which is the Premier League title.

Fenway Sports Group (FSG) and Liverpool Football Club announced that Sami Hyypiä has been appointed as the club's new manager, after signing a contract for one-year.


The announcement of Liverpool FC this afternoon has ended the rumors and speculations in the media for the past week surrounding Liverpool's vacant managerial post.
Sami Hyypiä, 40, is a former international Finnish footballer who made 464 appearences and scored 35 goals while winning no less than 10 trophies during his 10 years as a Liverpool player, between the years of 1999 to 2009. He has also been Liverpool's captain for a year before replaced by the English legend, Steven Gerrard, who still is the team's captain.

Hyypiä is regarded as an ambitious and determined manager but is still inexperienced, despite his endless knowledge he gathered as a player. Since his retirement from football, Hyypiä was an assistant manager for Finland before he was handed over Bayer Leverkusen's reins in 2012.
He held the position of a Leverkusen's manager for two years prior to his dismissal in 2014 after a loss to Hamburger SV. Hyypiä finished 3rd as his first season as manager in 2012\2013.
He recently signed for the Football League Championship club Brighton & Hove Albion, two months after the discharge from the Bundesliga club but terminated his contract in order to complete his signing as Liverpool FC manager. 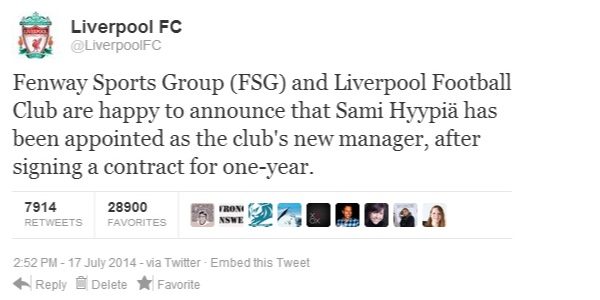 According to a reliable sources in Liverpool's system, Thomas Werner has held an urgent meeting where few candidates were suggested, including Rafa Benítez André Villas-Boas who released statements to the media that despite being flattered by Liverpool's interest, they are under contracts and will remain loyals to their teams, Napoli and Zenit St Petersburg, respectively.
Another candidate whose name was offered is un-employed Roberto Mancini but only as a back-up plan as Hyypiä was the club's first choice.


"I am very excited to come back to Liverpool FC, it is a wonderful opportunity and I am determined to bring Liverpool back to the top, a spot the club belongs to. I want to take the chance to thank John Henry, Thomas Werner and FSG for trusting me to lead the club to glory."


The captain who is considered as one of the great legends of Liverpool, Steven Gerrard has congratulated Sami Hyypiä for his appointment as Liverpool's new manager:


"I want to congratulate my old teammate and my new manager, Sami Hyypiä, for becoming the new manager of the club. I wish you best of luck and I'm looking forward to work and learn from you, my friend."


We will have to wait and see how the new, ambitious, determined an inexperienced handles the pressure this season.

ARSENAL_ruleZ: Thanks a lot, mate.

Jamesg237: What? And thank you very much.
Login to Quote

My Liverpool story had the same title

Its great to see Hyypia back at the club!
Login to Quote

Jamesg237: I did not know and I was offered the name. Thank you for the comment.
Login to Quote

Oh and James, yours is called 'Liverpool FC: The Future' ...y u no remember?!