Hey guys, I have an important announcement to make regarding the story. My mentality at the minute is to reach the Premier League as soon as possible and moving the story along at such a slow pace slows down my playing a lot too, unfortunately. For this reason, I'm going to do one huge update to cover rest of the current season (already played and completed), and then do bi-seasonal updates until I reach the Premier League. From there, I will slow down and return to 30+ updates per season. Sorry if this disappoints anybody, but I do need to get to the BPL ASAP. Thanks for all the support, you guys have been great!
Login to Quote

Season One: January - May 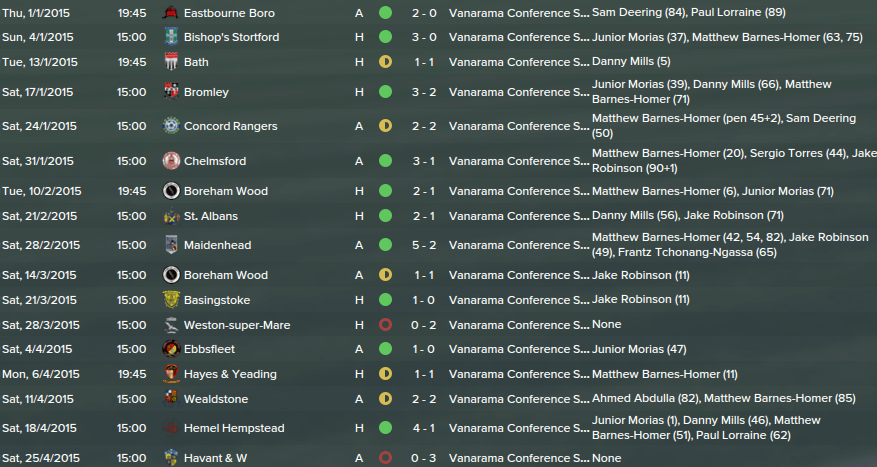 We extended our unbeaten run in the league all the way up until the end of March, where our thirty game streak without a loss was broken by Weston-super-Mare. Our record in the league from January onwards was 10-5-2, which is a fantastic record. Our highlight of the second half of the season came in our last home game of the season, where we won 4-1 against Hemel Hempstead. We had already won the league long before that and it was nice to end our season on a high by winning our final home game with ease. 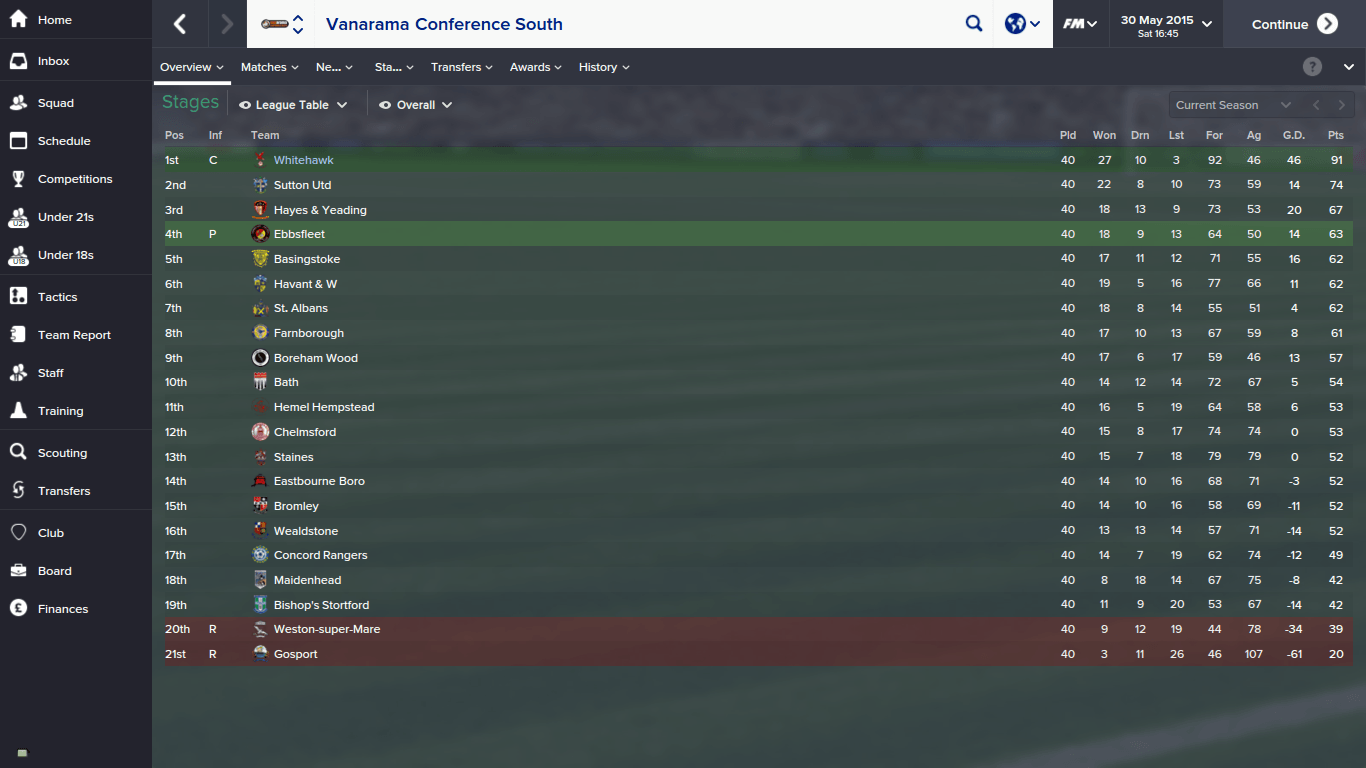 We topped the league table and lead by some distance! 91 points from 40 games saw us finish a whole 17 points ahead of second-placed Sutton United. We conceded the joint-least amount of goals in the league that season (46) and scored by far the most (92). We were in a league of our own, in many respects, and dominated from day one. Hopefully there will be more trophies to come!

Manager Of The Season 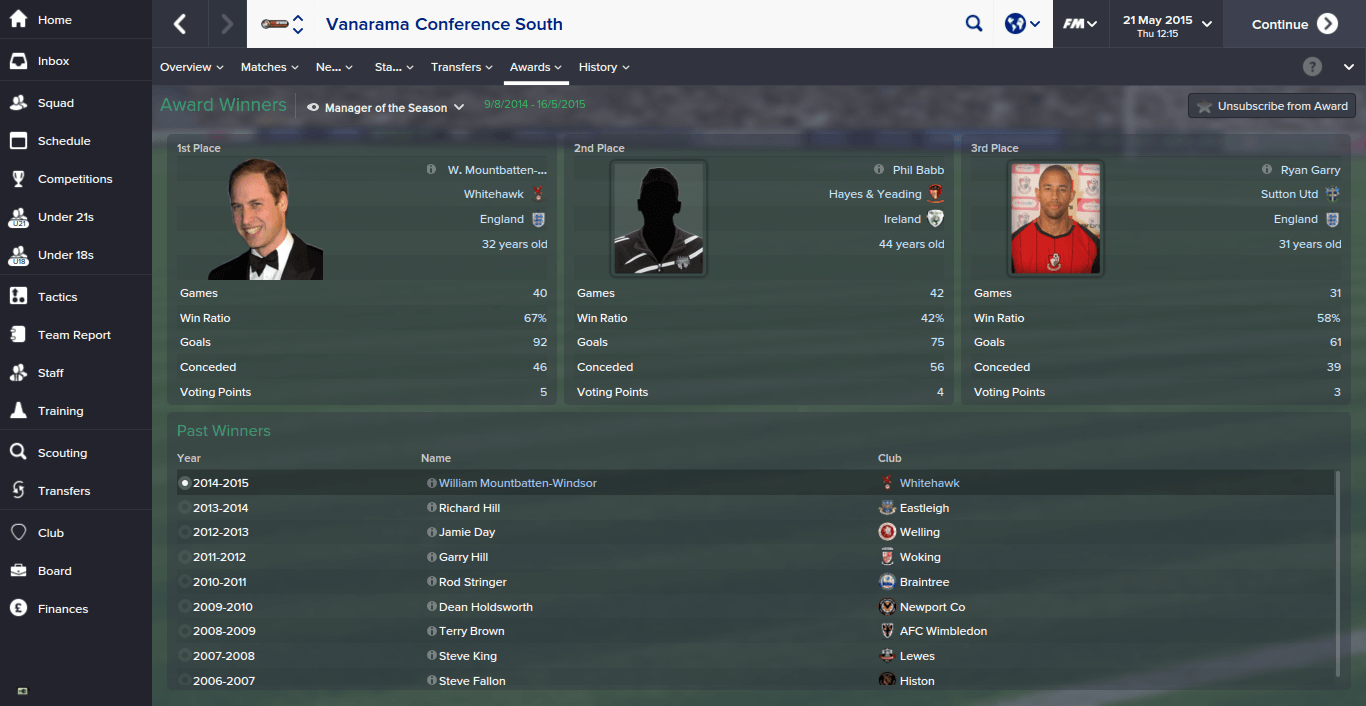 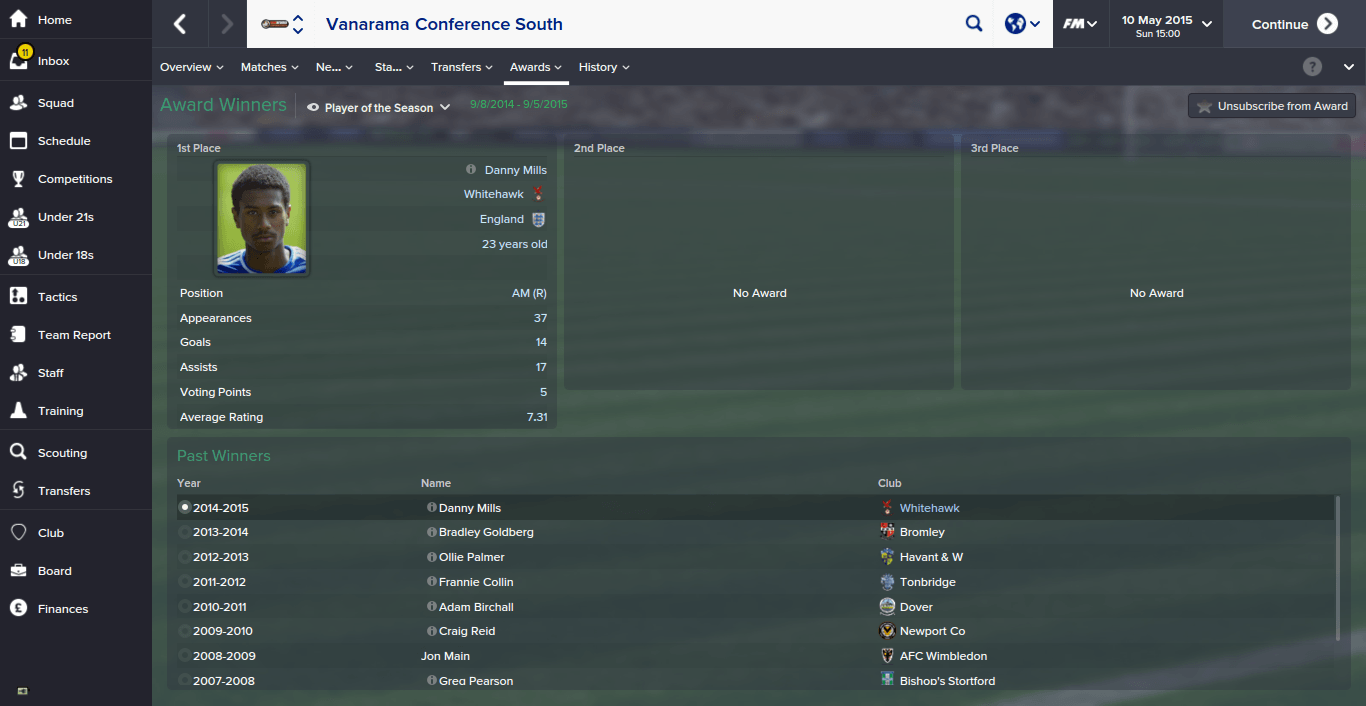 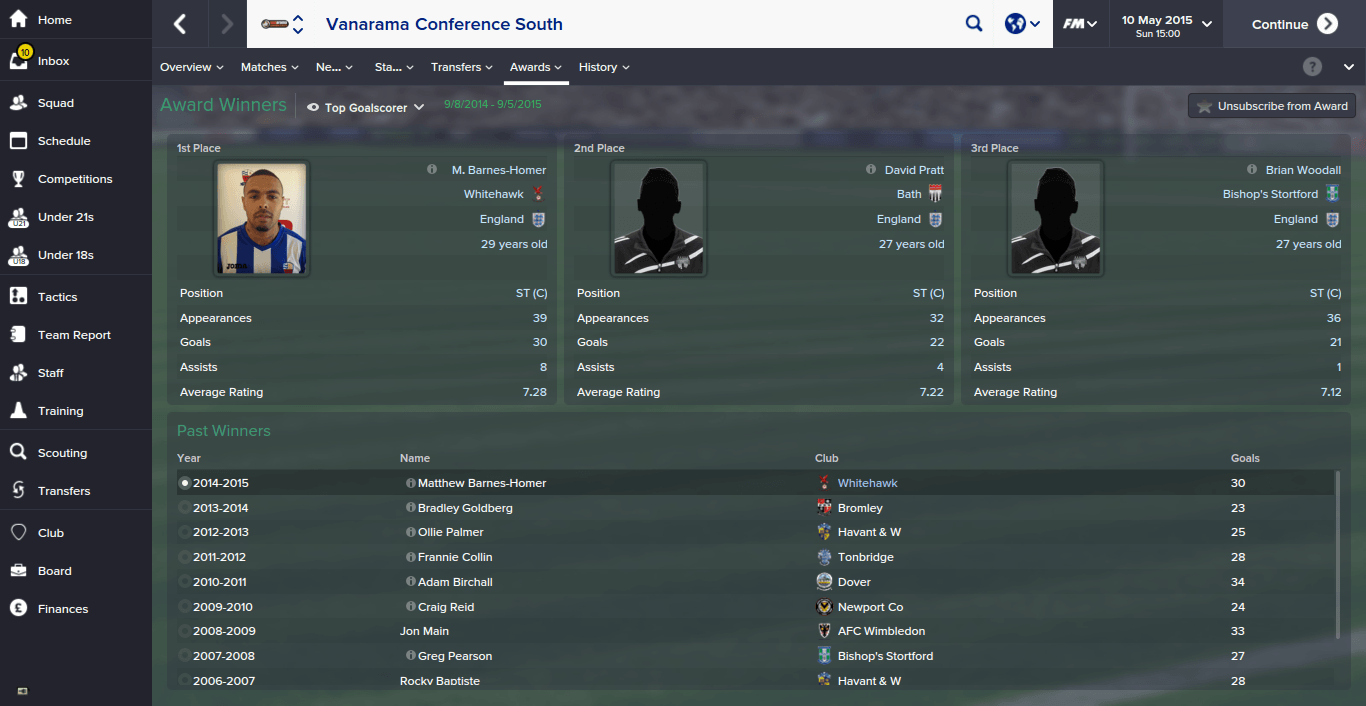 We performed absolutely superbly in the FA Cup this season, even going as far as the second round! It took a team two divisions above us to knock us out and we can be very proud of how we performed. I would love to win 'The Cup Of Dreams' some time and hopefully that can come soon. For now, however, the trophy goes to Arsenal (again!) and Wenger has entered the continental hall of fame. 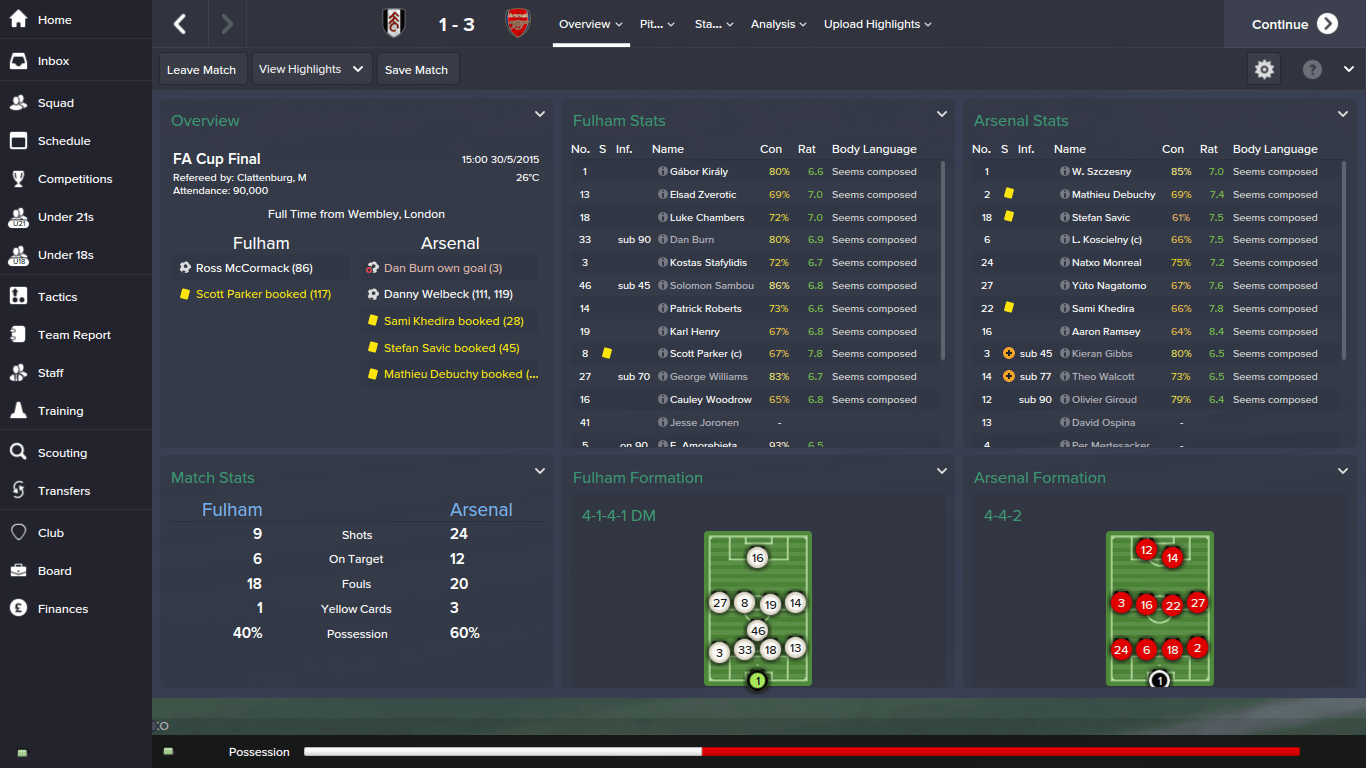 I'm disappointed that we were knocked out so early on in this competition but our success in the league and FA Cup overshadow our misfortunes in this cup. 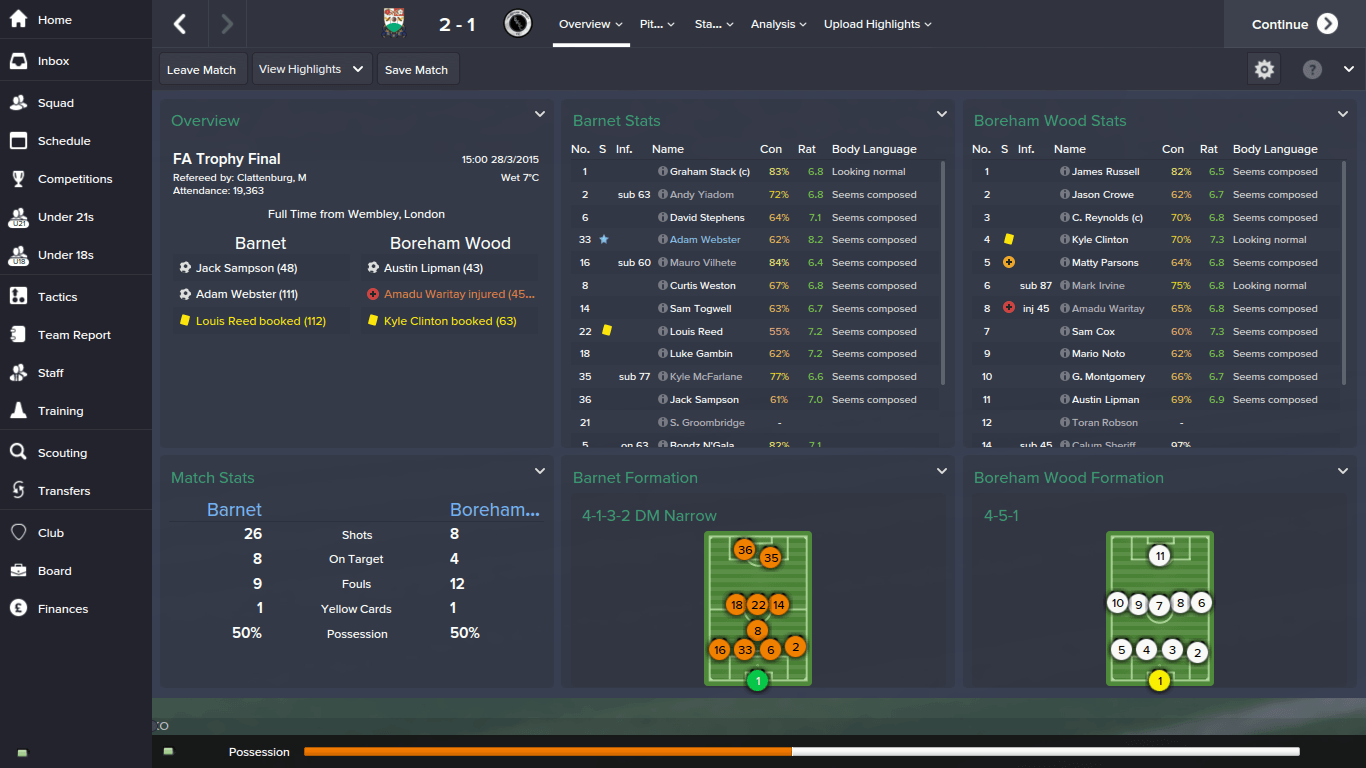 The biggest piece of news is that we are expanding our stadium in order to comply with the new league demands of Vanarama Conference Premier. Unfortunately we will need to spend a large amount of money every time we move up a league in order to comply with these regulations but it is something which we will have to deal with. In other news, I was offered a new contract and I accepted a £600 p/w wage cut (from £850 to £250) in order to help with the running costs of the club. It was a one-year extension which will hopefully see us have another successful season.

So that is that for this season. My next update will be August-December of the next season, which should hopefully be up soon. Once again, I apologise for cramming all this together but I want to get to the Premier League as quickly as possible. Onwards and upwards, come on you Hawks!

pompeyblue
8 years
Marvellous season review, for a marvellous season.
Not quite the 99 point tally I managed with The Hawks but I suppose your 17 points above second place is pretty good

Walter
8 years
Fantastic season, but only a one year contract?

Justice
8 years
pompeyblue, to be honest I just played my reserves as soon as we had the league secured

Walter, yeah it is the most I could be offered on a part-time contract

Neal
8 years
Decent end to the season there

Well done on promotion, can't wait to see how y'all fare in the step up next year!

Iconic
8 years
You have had a fantastic season Justice you are really deserving promotion. Premier league here you come!
1
Login to Quote

Jamesg237
8 years
A damn good season and great to see the board putting some funds into the club and expanding the stadium. They are obviously expecting an influx of new supporters to the club. Long may the success continue.
1
Login to Quote

Justice
8 years
All Above Commenters, thanks guys! 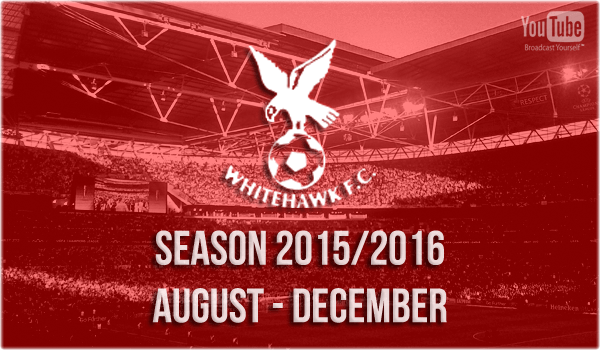 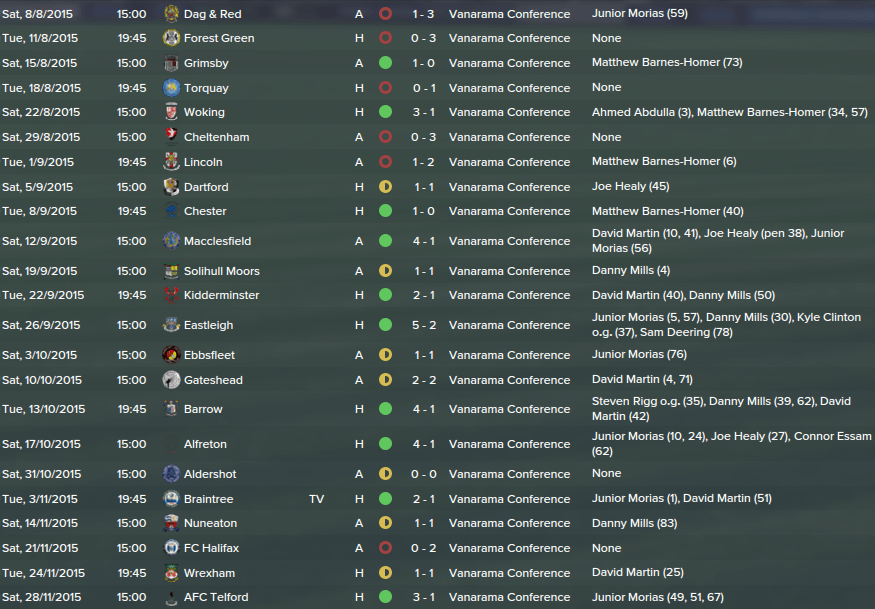 This season was never going to be an easy one for us and it took us the best part of a month to even start settling in to our new division. Five losses from our first seven games underlined this. However, we started to put good performances together and built a run of ten games unbeaten, which included six wins and four draws. This impressive form kick-started our season and after a total of 27 league games played so far, we have a record of 13-7-7. Our away record hasn't been all too great, with a record of 3-5-5. However, we are newcomers in this league and we can be very proud of what we have accomplished so far. 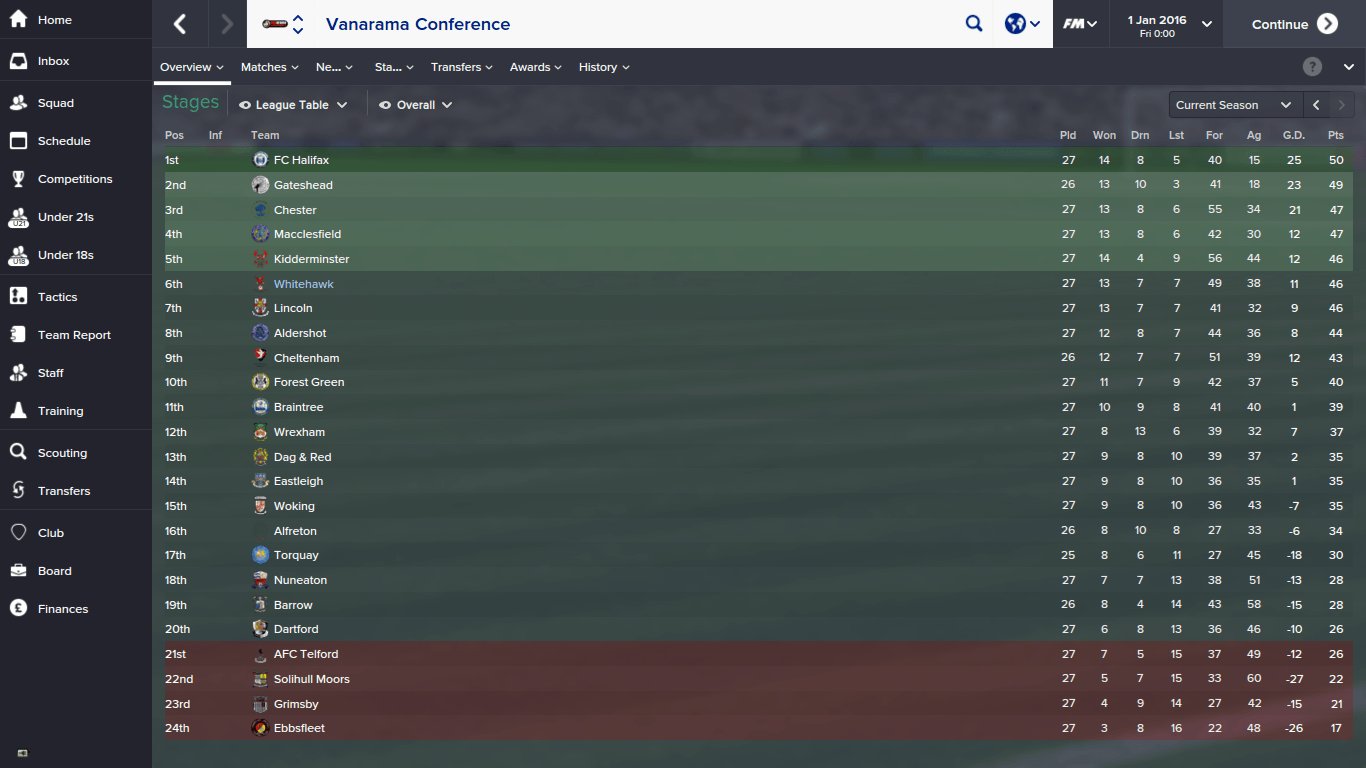 Surprisingly, we sit in a very very respectable 6th position! 5th placed Kidderminster are above us on mere goal difference. We have been a true credit to ourselves and with a gap of just four points between us and first, we still have a lot to play for yet. If I am being honest, I would be happy with a top ten finish. While this is my expectation, I will play for a first place finish and try to win every game possible. After all, every little victory does add up and if we were to put a decent run together, who knows what would happen!

We got hammered by Cheltenham in the FA Cup. They thoroughly deserved the victory and progression to the next round.

Neal
8 years
Really tough start to the season, but once you picked it up you really started getting some nice results. A playoff push is definitely on the cards, c'mon Whitehawk!
1
Login to Quote

pompeyblue
8 years
Indeed you can be very proud of what you have achieved so far, it has actually been a really encouraging first half of the season, for Whitehawk.
Yes your away form hasn't been the greatest but you're still in a good league position and definitely can reach the play-offs!
Any chance of showing us your signings?
1
Login to Quote