Ta31_a, when world class English players who will improve my squad come along, I will buy them. I do want to bring more English players in to my squad, and you can see that in my signings. Stephen Murray cost £15.5M, Matt Ursell cost well over double that, Samuel Hamilton cost £17.75M, Roger Hartley cost £9M, Tony Hood cost £11M.... These are all very big prices for English youngsters. So far, Murray & Ursell are in my senior squad because they've developed in to that quality. The other three will be there or there abouts when they develop. Will I sign more English players? If there are good prospects, I will sign them. I won't sign English players for the sake of it. I'd rather sign trophy-winning players from abroad than failure-burdened English players any day. 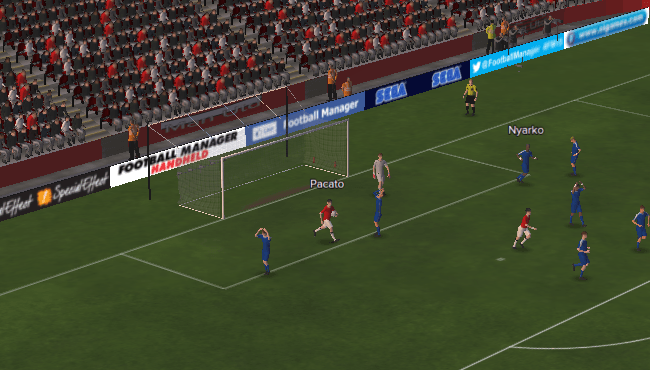 Sky Sports understand that Whitehawk manager Prince William is weighing up a move for Manchester United full-back Pacato. Reports from sources close to Whitehawk claim that the club are looking to prepare a £30M bid for the Brazilian international. Manchester United are unlikely to be willing to part with their prized defender, although Pacato may look to push a deal forward should interest arise in him.

Prince William wants to make 24 year old Pacato his marquee signing of the window, having already let Malte Köhn go in the other direction. Vicente Acosta and Guido Robellaz are Whitehawk's current options at right-back but the latter isn't considered to be good enough yet to be considered Whitehawk standard, being seventeen years old. While Robellaz did play on ocassion for the senior team last season, Prince William is thought to want a second top class right back in his squad to add more competition for places.

Pacato has already played under Prince William for Brazil, winning the Copa América in the summer. Despite not being name in the Dream Team (surprisingly), Pacato was instrumental in Brazil's success, claiming three assists in five appearances. Pacato also picked up a very impressive 7.38 average rating (courtesy of whoscored.com), and fit seamlessly in to Prince William's side.

As a full-back, or wing back, Pacato has it all. He has great defensive composure and, as the Copa América proved, fantastic attacking ability. He may be small in stature (173cm or 5'8), but has great physical ability. Pacato is certainly a determined individual, and has great experience on his side. At the age of just 24, Pacato has already recorded 205 Premier League appearances for Manchester United and is well on the way to becoming a Premier League great, whether that be at Manchester United or at Whitehawk.

Sky Bet has listed Pacato at 13/4 to join Whitehawk, while he is at 2/5 to stay at Manchester United. With rumours building and the new season just a month away, will Whitehawk and Prince William make a move for Man Utd's star man? 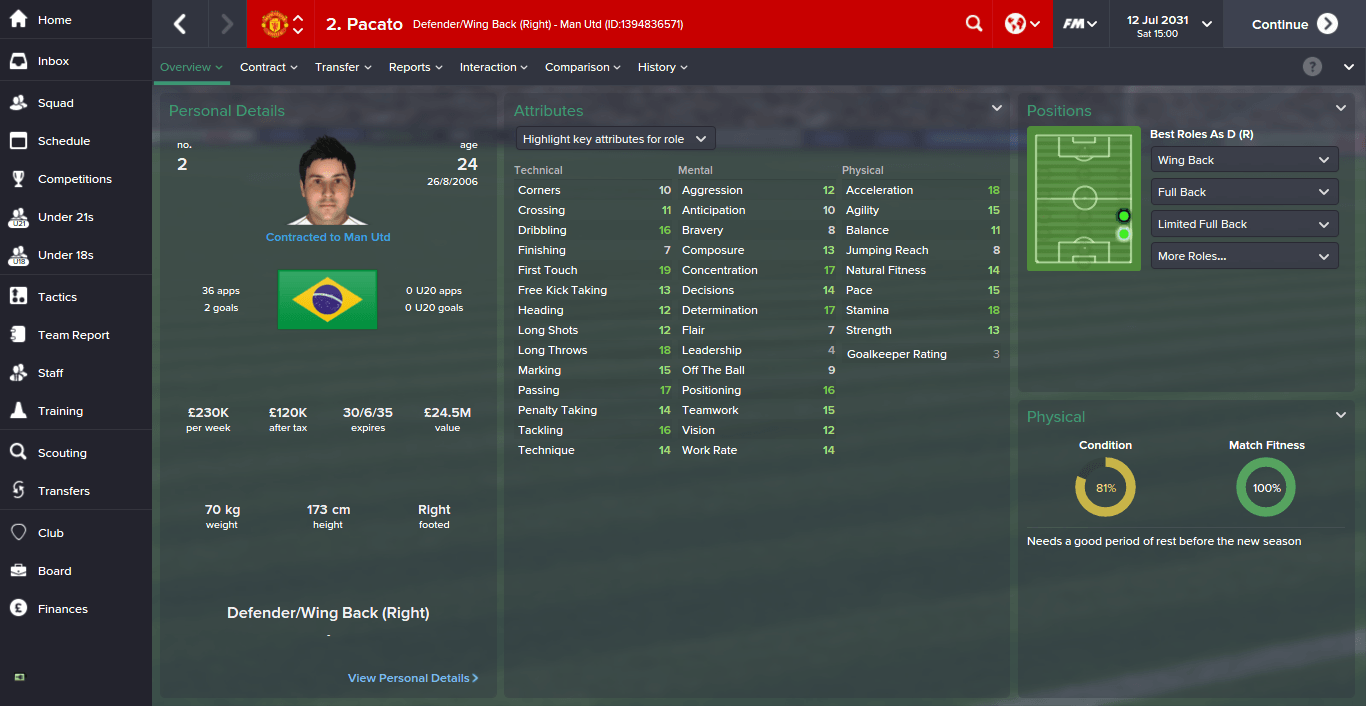 Walter
5 years
He looks incredible, would be a great acquisition to the side. I feel that he'd cost a lot of money though. Not that you don't have that

Justice
5 years
Walter, I won't reveal anything yet

Tallery
5 years
The French-Bearded-Hippo will be a huge player for you this season. And another Brazilian? Trying to replicated Chelsea

Justice
5 years
Tallery, Chabbert has a big season ahead of him to see if he can claim the starting spot. As for the Chelsea reference... I'm offended!

Whitehawk Going Down Under 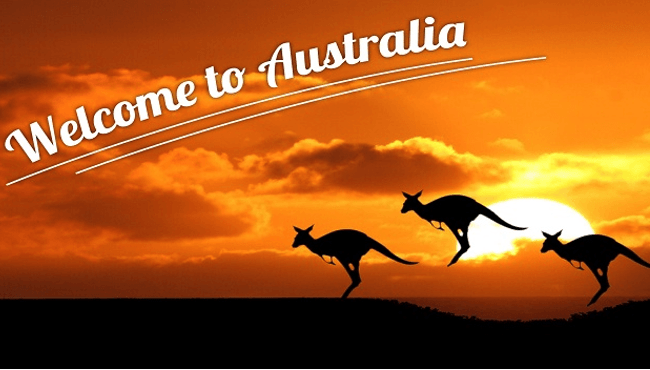 World leaders Whitehawk will begin their pre-season tour of Australia when they fly to Melbourne on the 10th of July. Whitehawk will play four fixtures in Australia as part of their tour, and participate in many social events such as meet & greets, fan Q&A's, merchandise give-away's, sponsored events, charity events and much much more.

Almost every member of Whitehawk's senior squad will make the trip to Australia, while there are still a number of players who will stay in Brighton to rest and recover before meeting up with the squad in Australia on a later date. The players staying in Brighton for the time being are Claudio Elorrieta (GK), Emmanuel Acuña (DEF), vice-captain Adauto (MID), Bismark Nyarko (MID) and Hippolyte Chabbert (FWD). The first three named players participated in this summer's Copa América and so have had no holiday, while Bismark and Hippolyte picked up knocks in the final games of the season which they are yet to fully recover from.

Whitehawk will open their pre-season tour of Australia when they face QAS at Meakin Park in Brisbane. This match will be played on 20/07/2031, and is available to watch online for all whitehawklive.com subscribers. Whitehawk will then play in front of a sold-out 45,500 crowd against Sydney FC in the Sydney Football Stadium on 24/07/2031. On Monday 28th July, Whitehawk will play against Brisbane Roar in front of a crowd of over 50,000 spectators, before concluding the tour against Melbourne Victory on 1st August.

Whitehawk have already faced Celtic in a friendly at the Whitehawk Stadium last Saturday, coming out victorious in a 3-0 win. Once the tour of Australia is complete, Whitehawk will stop in Verona, Italy to play against Whitehawk's affiliate Verona. This match will take place on Wednesday 6th August, three days before Whitehawk face Manchester United in the FA Community Shield. Whitehawk will then face Manchester City in the UEFA Super Cup in Telia Parken stadium in Copenhagen, Denmark, before then beginning their league season.

Are you excited to see your favourite players come to Australia? If you are looking for tickets, jersey, merchandise or any information about Whitehawk. go to www.whitehawkfclive.com to for more details.

LFC
5 years
Great crowd numbers for those Australian games. Nice win against Celtic and good luck for this season 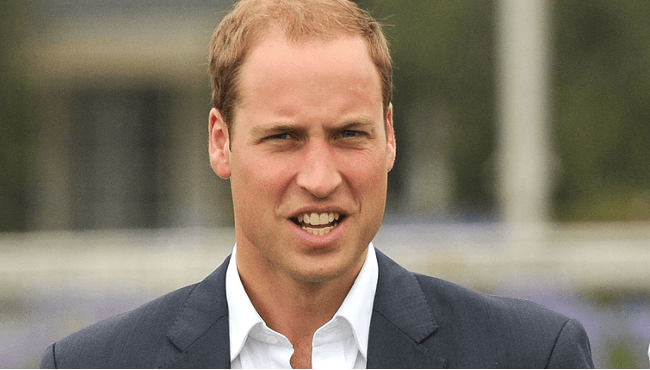 Whitehawk manager Prince William has publicly announced his interest in bringing Manchester United full-back Pacato to Whitehawk. William managed Pacato in the Copa América this summer, where the defender shone in a trophy-winning campaign. In a squad which is already bursting with world-class players, Pacato would be the final piece in the jigsaw puzzle for Prince William as he prepares for yet another crazy trophy-laden campaign.

Prince William was speaking ahead of his team's tour of Australia, where they have, surprisingly, never traveled to before in a pre-season. He was full of praise for his current squad, and especially for Pacato, a player who he truly admires.

William: "I'm more than happy with the squad I've got. We've won 14 trophies in the last two seasons which is a perfect record, and that's not something I can ever complain about. We are truly the best team in the world and I can't be arrogant when I say that because we have the titles to prove it.

The rumours are true, we are interested in bringing in Pacato. Can we do a deal? Hopefully. He's a world class right-back and was a pleasure to work with at the Copa América. He has it all, really. He can defend, attack, run, sit back, and link up well with his team mates. I don't think there's been a right-back as good as him since maybe Maicon or Philip Lahm. I think he'd be a perfect fit for this club and this club a perfect fit for him. It all comes down to the manager Guardiola and Pacato. Would Guardiola be willing to part with Pacato? Would Pacato be willing to leave Manchester United? I don't think there's a better club in the world to be at than Whitehawk."

Pacato also had his say in a recent interview. He admitted that he could not turn down Whitehawk, but he feels at home in Manchester.

But I would not be able to turn down a move to Whitehawk. I am very ambitious in my career and I want to play for a club who has the best chance of winning trophies. For now that is Whitehawk. They are unbeaten in over three seasons in the league and have won everything there is to win. While my heart will forever be in Manchester, I would not say no to Whitehawk."

Feliks
5 years
Sign him... may as well
1
Login to Quote 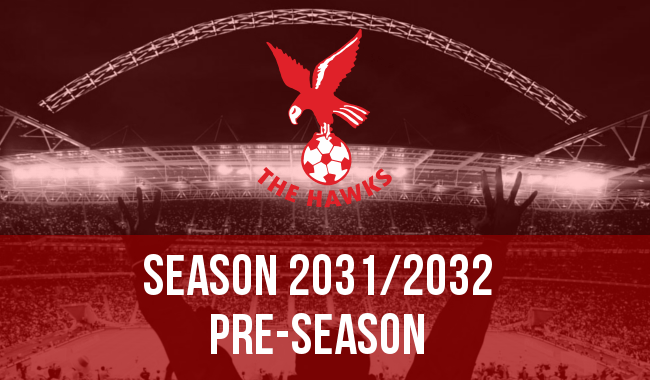 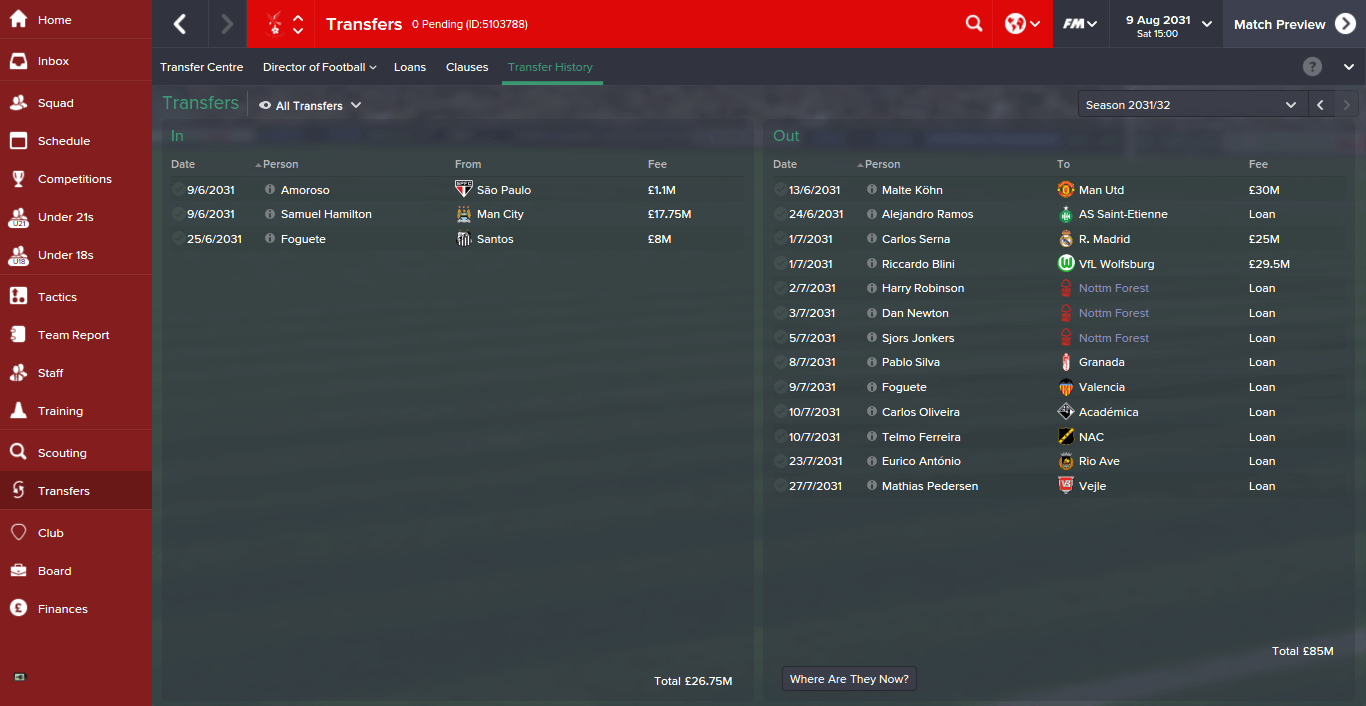 We brought in three youngsters for a combined fee of £26.75M, and sold three for £85M. Some players went out on loan to clubs. If you want to see screenshots of the players bought or the players sold, scroll back through the updates. With three weeks left in the transfer window, there's bound to be some more movement.

You were already aware of our 3-0 victory over Celtic at Whitehawk Stadium before we embarked on our tour of Australia. The tour itself turned out to be extremely successful, as we played in front of four capacity crowds and sold plenty of merchandise. The friendlies themselves went well. We played four and won all four, scoring 27 and conceding just 1 in the process. We squashed QAS 4-1 in our first match, before Matt Ursell lead us to a 9-0 romping of Sydney FC. Hippolyte Chabbert joined up with the squad after recovering from a slight knock to spearhead our 7-0 battering of Brisbane Roar FC, and Miodrag Kostic starred in the 7-0 destruction of Melbourne Victory. We concluded our pre-season with a friendly away to Verona. With the Community Shield three days after, I fielded a side composed mainly of U21s, and Verona came out 3-1 victors. All-in-all, the players gained match fitness and gelled well together, while plenty of merchandise sold in Australia. I do have to say that it was a rather enjoyable and successful pre-season.

We open our season with the Community Shield game against Manchester United at Wembley, before travelling to Copenhagen to face Manchester City in the UEFA Super Cup. I will then look to organise one more home friendly before we kick off our league campaign away to Blackburn, and we round off the month by hosting Arsenal. I'm going to be saying this every month but I do expect to win every single one of our upcoming games. We have the quality in our team to do so.

But then again, nothing makes me happier than seeing Melbourne Victory getting absolutely obliterated so hats off to you