Neal
5 years
TodayAtTomorrow: #TeamReus is the only team worth being on, but knowing FIFA's injustice he won't even come close

Nick: He always is killing it, to be fair

Shanked: No love for goalkeepers even in the game, it seems

Ronaldo is a beast but I like Neymar. Congratzzz on the 10k!!!!!!
Login to Quote 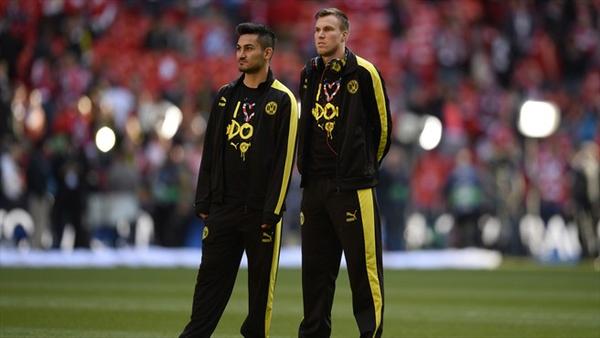 Two of Borussia Dortmund's Germany internationals have signed five year contracts with the club, ensuring the national backbone of the side will live on.

Ilkay Gundogan and Kevin Grosskreutz, two big fan favorites at the Signal Iduna Park, have accepted pay raises and signed long-term contracts with Borussia Dortmund through 2019 as Brian Laudrup continues to seal up his stars for the future.

After a rocky start to the season that included a tough 3-4-2 stretch, Borussia Dortmund finally seems to be cruising. The results, the tactics, and the security of the manager all seem to have finally come together, and this has been buoyed on the contract extensions of Milos Jojic, earlier, and now Ilkay Gundogan and Kevin Grosskreutz.

Though not quite boasting the likes of Bayern Munich's Germany international contingent, Dortmund has its own platoon of German footballers that have the love and affection of der BVB's fans. Veterans like Roman Weidenfeller, Sebastian Kehl, and Marcel Schmelzer are joined by regulars Sven Bender, Marco Reus, and Erik Durm.

Two players that are perhaps underrated in the national team fold are Ilkay Gundogan and Kevin Grosskreutz, and yesterday it was announced that those two very players have been given the five year contract extensions. Despite having only 23 caps between the two of them, Gundogan and Grosskreutz are both hard-working, talented German internationals who seem set to spend their careers at Westfalenstadion.

Versatility and work rate the keys

Of the three players who have had their contracts extended by Brian Laudrup, the trio share three things; a midfield position, high versatility, and a very good work rate. Milos Jojic, who was given a new contract a few months back, has stepped into an important central and/or left midfield role this year and made an impression with his attacking craft and defensive pressing.

Ilkay Gundogan also has that box-to-box ability out of the middle of the park. Able to sit in front of the defense or even sit underneath the striker, Gundogan offers a major threat. Kevin Grosskreutz is also known for his vast versatility; the Ahlen youth product can play in any position up either flank.

Still no movement on Reus contract

While numerous other players seal up new deals, the biggest player yet to receive a new contract is the most important player on the team; Marco Reus. The German international left winger has been in lethal form this season, but as January approaches with his €24M release clause, Bayern Munich are rumored to be heavily interested.

No matter how many other players he keeps, if Brian loses Marco Reus, there will be serious consequences for der BVB this season. Until then, however, Dortmund fans will at least be able to celebrate the extensions of two German fan favorites as the new year approaches.

Neal
5 years
Walter: Yessir, don't want to be one of those clubs with not a single player from the country the club is in


My bad entirely on this monthly update, I totally forgot to screenshot the league tables! However, you can rest assured that I'm roughly eight points behind a rampant Bayern Munich in the Bundesliga and I'm three points ahead of Real Madrid in La Liga, but they have two games in hand. Anyway, on to the results!

As the 2014 calendar year comes to a close, despite another string of positive results for Brian Laudrup's men, there isn't all too much for fans of Borussia Dortmund to be celebrating over the Bundesliga's annual winter break. Trailing Bayern by eight points and finishing second in their Champions League group, the second half of the year is set to be twice as hard as the first.

Henrikh Mkhitaryan, Marco Reus, and Karim Bellarabi were in fine form this month, each player scoring two goals. The trio, who are the three attacking midfielders behind the lone striker, have had to pick up some of the goalscoring slack left by the misfiring Ciro Immobile, Pierre-Emerick Aubameyang, and the out of favor Adrian Ramos.

The lack of goals was made very apparent in a stretch of three games where der BVB could not muster more than a single goal, most crucial in the loss against Paris St.-Germain. The game in France carried another problem as well; Matthias Ginter, already deputizing for Sven Bender and Sebastian Kehl in defensive midfield, pulled his hamstring, ruling him out all month.

This loss means that Borussia Dortmund will have an extremely difficult test in the First Knockout Round of the UEFA Champions League; FC Barcelona. The Spanish giants, currently battling Atletico Madrid and Real Madrid for La Liga, could knock der BVB out of the Champions League quite early and potentially add more distaste to this season.

Now, though, the German sides will all have a month off of football due to the Bundesliga's winter break. With the Hannover game taking place on the 20th of December, they will not play again until the 24th of January when they take on Paderborn at Signal Iduna Park. Perhaps this chance to refresh is exactly what they need before the second half of the year.

It's been an amazing couple of months for Atletico Madrid; that final draw of the year against Athletic Bilbao snapped an incredible thirteen game win streak for Michael Laudrup and his men who have suddenly began to scintillate the country with their caution-to-the-winds, all-out attacking football.

A 6-0 dismantling of Numancia over two legs in the Copa del Rey was a big positive for Atletico as they moved on to the next round, where they will play fellow La Liga side Malaga in January. A win over Ludogorets in the Champions League also assured they won Group E easily over second placed Ajax.

This has not spared them much in the First Knockout Stage, however, as the Mattress-Makers will be forced to take on Italian champions Juventus. The Old Lady of Italy finished second in their group on goal difference against Atletico's archrivals, Real Madrid, and will now have to beat another Spanish side if they are to advance.

Surprisingly, as we head into the new year, it seems Los Colchoneros are in a very strong position for the title. After losing Simeone over the summer, most people assumed the squad would not have the harmony to keep fighting, and yet here they are, right up among the front-runners, battling to defend their title.

pompeyblue
5 years
Another great month for both clubs, great work!
Oh and, congrats on 10k views

Sameericale
5 years
The Laudrup Brothers are two great managers! A very interesting story...good luck!
I sense a meeting in the Champions league

Sameericale: I really hope they meet in Europe, that'd be awesome

Feliks: Yes they are Feliks, and aside from those dropped points, December rocked