A quick note about this second monthly update; my bad entirely for forgetting to screenshot the Champions League groups for both teams, so you'll have to just imagine it for this month. I have the images for next month, don't worry 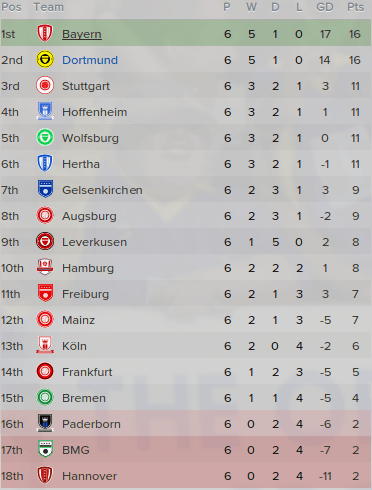 It was another excellent month for Brian Laudrup's Borussia Dortmund as they stormed their way to four wins in six games and kept pace with Bayern in the Bundesliga and Arsenal in the UEFA Champions League.

At home, we continued firing on all cylinders. We managed to score fourteen goals in three games at the Signal Iduna Park including an absolutely sensational 4-1 thrashing of French giants Paris St.-Germain that really got me optimistic. We also managed a creditable 2-2 draw at the Emirates, coming back from 2-0 down at half time to keep the results flowing in Europe.

Domestically, we managed two 5-1 wins in the Bundesliga over Mainz and Augsburg. Karim Bellarabi has been instrumental in these wins; Laudrup's first signing in charge in Germany managed to chip in two goals and six assists throughout September, utilizing his blistering pace and dribbling skills to make a huge impact.

The only truly frustrating result of the month was a 1-1 draw on the road against Stuttgart. However, because Bayern drew Borussia Moenchengladbach in the same week, der BVB managed to stay point-for-point with the title favorites and manage to save some face in the process.

Next month, that duel with Bayern will come the fore again when Dortmund play the Bavarian giants at the Allianz Arena. Until then, the two will rest atop the table, fighting to find a way to just stick their necks ahead. 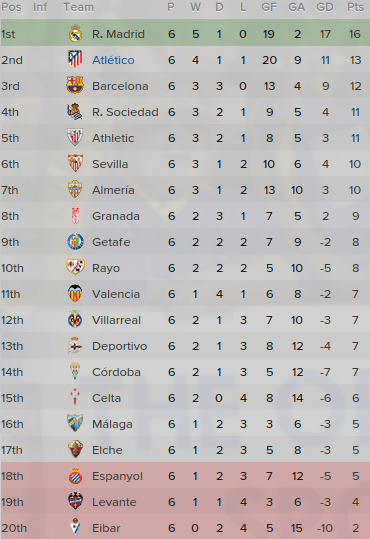 It was an incredibly frustrating month for Atletico Madrid fans as Michael Laudrup's start to the season took a bit of a sour turn. The month started off with a Derby Madrileno thrashing at the hands of Real Madrid. The whole club felt optimistic going on, but we were by far the inferior team and paid a heavy price.

The match against Ajax was perhaps even worse. Up 1-0 after 60 minutes, Laudrup decided to make a triple change to his side that was suddenly struggling to even hold on against Ajax's rampant defense. Within ten minutes of that major shift, both Gabi and Joao Miranda were sent off, leaving us down to ten men. We then gave up the lead...twice...and dropped two points at home.

We then managed a big win against Celta before yet again massively disappointing against lowly Almeria. After coming from 1-0 down, we were leading 2-1 with just ten minutes to go when Thievy scored an equalizer to prove Atleti fans another kick in the teeth.

After that, Los Colchoneros finally picked their form back up to win two straight matches, including a very strong win at home against Sevilla. A 2-1 win over Ludogorets also gave the side their first win in Europe this year and something to build on in weeks ahead.

Next month will have to be a lot better for the capital city side. It will start tough on the road against Valencia, but from there, winnable fixtures loom. If Michael Laudrup wants this reign to be as successful as he wants, the wins need to start flowing now.

Walter
5 years
Love the layout of the update, and some of the results certainly match it. Unlucky about the Madrileno derby loss but they've got arguably the best player on the planet at the present time, along with lots of other Galacticos, so it shouldn't put you off!

Verdinho
5 years
Mkhi Mouse seems to be having great fun for Dortmund, as did Real Madrid

Neal
5 years
JasonRM: Thanks m8, hopefully we continue in this form and don't get thrashed again

Walter: Thanks Walt, glad you like the style! Los Blancos have a formidable team, I was just hoping we could muster more out of the match...hopefully we can redeem ourselves at the Vicente Calderon later this season

Jonaldinho: Yeah that was a blight on the month but almost everything else went generally to plan 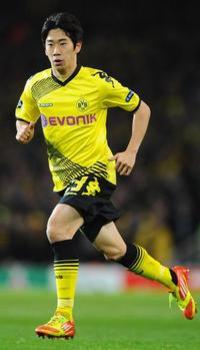 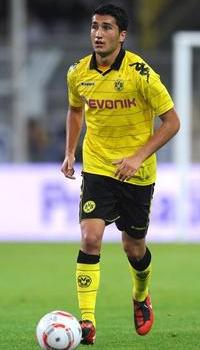 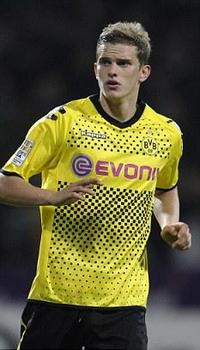 Borussia Dortmund has been struck down by the injury bug. Six important first team players have been ruled out for extended periods of time, including hugely influential midfield trio Shinji Kagawa, Nuri Sahin, and Sven Bender. Der BVB are now down to bare bones as they try and keep pace with Bayern in the league.

Generally, it's been a bright start to the season for Borussia Dortmund. Newly appointed manager Brian Laudrup has kicked of his career with multiple high-scoring victories in the Bundesliga and DFB-Pokal, urging supporters to believe that he is the right man to lead them forward from the wondrous Klopp era.

Those plans, however, have taken no less than six serious hits over the last few weeks. Neven Subotic, Sebastian Kehl, Sven Bender, Nuri Sahin, Shinji Kagawa, and Karim Bellarabi have all been ruled out from a range of 2 weeks to 3 months, leaving the side down to backups and makeshift replacements in key positions.

The biggest hit to Dortmund's squad is in the most crucial area; the middle of the park. Club captain Sebastian Kehl is out for a month with a twisted ankle. More importantly, however, Sven Bender will miss three months with a torn hamstring, meaning that no defensive minded midfielders are left. Reports suggest that Laudrup will employ young Matthias Ginter in that ball-winning midfield role as cover.

Nuri Sahin is also out for at least another month, still working on recovering from knee tendonitis he picked up over the summer that has ruled him out of the season so far. This position seems generally covered as Ilkay Gundogan has just returned to action to join breakout star Milos Jojic in competition for the deeper playmaking role.

Along with midfield woes, der BVB's depth in the back is looking shaky as well. Things are looking difficult at center back, mainly. With Neven Subotic out 2 weeks with a twisted knee and Matthias Ginter set to be deployed further up in midfield, only two first team central defenders remain; Sokratis Papastathopoulos and Samuel Umtiti.

There are some concerns especially about Umtiti. The Frenchman, who recently signed for Borussia Dortmund for €20M on deadline day, is still only 21 years old with no previous Bundesliga experience. However, after a shaky start against Arsenal, Umtiti has put in some very solid displays against Stuttgart, Mainz, and PSG to prove that he's cut out for the job.

What might be most frustrated for fans at Signal Iduna Park is the loss of two new signings in the attacking third. Shinji Kagawa, returned to Germany after a failed stint with Manchester United, has admittedly not played much thus far due to the incredible form of Henrikh Mkhitaryan. However, he will now miss four weeks with a groin strain.

Karim Bellarabi is also out for a month with a twisted ankle. The German winger who just signed from Bayer Leverkusen has been in absolutely outstanding form, scoring and assisting with magnificent ease and earning the love of the fans. In his stead, Pierre-Emerick Aubameyang will have to shift out wide and allow Ciro Immobile to step up top.

It will be interesting to see if Dortmund can handle all of these injury issues. No team is immune from the loss of key players, but if Laudrup and his men can keep winning without them, there is no reason to believe that when they all return they will be a force to be reckoned with.

No1VillaFan
5 years
Wow your not having a good time of it so far, but you will bounce back I am sure of it
Login to Quote

Hope the players that are currently backups step up to the plate!
Login to Quote

Neal
5 years
No1VillaFan: Yeah it has been tough in terms of losing players but hopefully we can fight on!


We've officially hit the swing of the season, two months in. It's no longer the breakneck start that always ensues, it's now the regular scheduling of matches of the mid-season slog. However, at the same time it was one team's very worst month thus far...read on to see who. 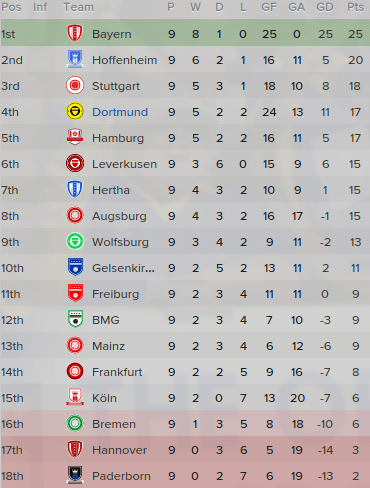 This was undoubtedly the most brutal month I have ever experienced. Ever. It all started with an atrocious 2-2 draw to lowly Freiburg where we surrendered the lead twice, the second time in the 87th minute to Maximilian Philipp's uncontested header. Not the best way to prepare for a Bayern Munich matchup.

Guardiola's side took us to the cleaner's. Milos Jojic and Matthias Ginter, my only truly 100% fit central midfielders, were never going to be able to handle the likes of Thiago Alcantara and Bastian Schweinsteiger, and FCB dominated possession. Xherdan Shaqiri and Arjen Robben were deadly down the wings, and it was the Swiss winger who gave them their lead before Kevin Grosskreutz made things worse with a late sending off.

The game against Sparta was frustrating because we were undoubtedly the better side. More possession, shots, shots on target, and corners all meant nothing when Lukasz Piszczek's own goal cancelled out Gundogan's early go-ahead goal, and from there we struggled to put away any chances we might have created.

The game against Hamburg was the biggest low of the month. Up 1-0 just after half time, I could only watch in utter disbelief as the Imtech Arena exploded, watching their home side put four straight goals past Roman Weidenfeller from the 50th minute to the 88th. We managed a late consolation goal in the 90th, but it meant nothing to me. I'd never tore into a team that badly before, but by God I let them know of my wrath after the final whistle.

The only positive of the month came when we advanced in the German Cup against Stuttgart. There was the rampant Dortmund I knew, and if we are to have any hopes of success this season, we need more performances like that. Right now, we are slipping. 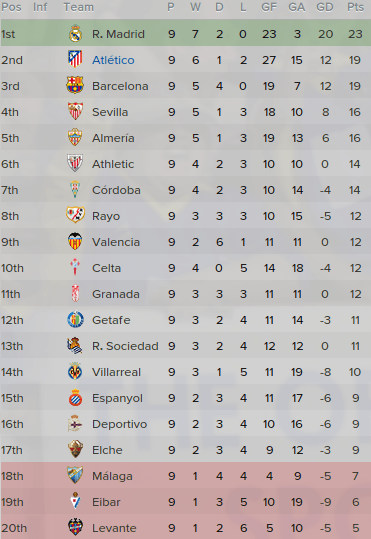 Atletico got off to just as poor a start as Borussia Dortmund is, being flogged by Valencia 4-2. I was afraid we'd go the same way as the German side, but thankfully we seemed to learn our lesson after this match (especially a certain Alessio Cerci), and results started to pick up.

October can also be called the Alessio Cerci month. The Italian right winger, who had been decent at best since coming over from Torino, absolutely exploded into life in the final three matches. He and Mattia Destro led the team past Espanyol and Zenit, combining for all five goals between the two of them.

The final game against Getafe, a Madrid derby, was an absolute thriller. A brace from Cerci sandwiching a Vicente Guaita own goal had given Los Colchoneros an easy 3-0 lead. A late quickfire brace from Alvaro Vasquez, who previously played under Michael Laudrup at Swansea, put Atleti's position under threat. Alessio Cerci nearly finished a great month with a hattrick when his side won a penalty in stoppage time, but he was expertly denied by Guaita, and the game finished 3-2.

Next month should be even easier for Atletio Madrid. Even though they have a full six games, none of those teams pose a serious threat to Atletico's power. A winning streak is exactly what the team need now, to put pressure on the big two and put themselves in a good place to try and defend their La Liga title.

Tallery
5 years
Neal Brian I expect better of you

Walter
5 years
Tough month with all those injuries culminating for a depleted Borussia Dortmund squad, Atlético also put on a good month despite the setback at the Estádio Mestalla