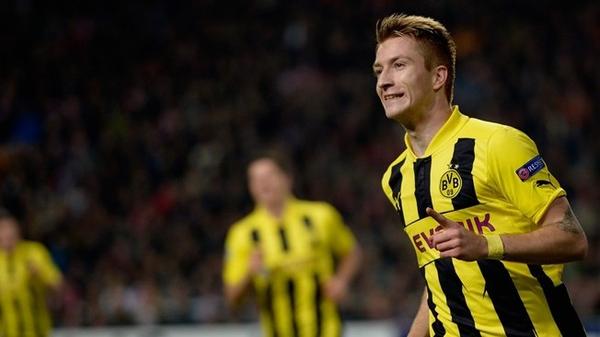 Spanish powerhouse Atletico Madrid has emerged as the new favorite to sign Marco Reus after meeting his release clause in an official bid launched this morning.

After a bit of an up-and-down first half of the season under new manager Brian Laudrup, disaster has struck here at the beginning of January. Superstar German international left winger Marco Reus, who has yet to agree a new contract with the club, has had his €24M release clause met by Atletico Madrid and continues to be heavily pursued by Bayern Munich.

Many fans were hoping that Reus would agree a new contract; with Milos Jojic, Kevin Grosskreutz, and Ilkay Gundogan all sealing five year deals with the club, it seemed only a matter of time before Reus followed suit and committed for the long-haul.

However, rumors have persisted over the last six months over whether or not Reus would be on the way out. Bundesliga monopolizers Bayern Munich, who have already signed the world class duo of World Cup winning Mario Gotze and prolific striker Robert Lewandowski from der BVB, seemed the favorites to land Marco Reus as well, completing their trident of rival players.

Now, though, Atletico Madrid has put itself in the driver's seat for garnering Reus's signature by officially matching his €24M release clause. Currently flying high on top of the La Liga table and having advanced to the next round of the Champions League, the Estadio Vicente Calderon could be an unlikely yet logical destination for the young German who is determined to make a mark on world football.

None of the intrigue, however, compares to one simple fact. Brian Laudrup has repeatedly told the press that Marco Reus is not for sale, that he will sign a new contract, and that it was just taking time to iron out the details. In the meantime, Brian's very own brother Michael Laudrup, who manages Atletico Madrid, has decided to bid for Brian's star.

Just two days after beating his brother to Danish wonderkid Marco Ramkilde, it seems Michael is not yet satisfied in his sibling rivalry. Now, the Great Danes must battle it out over Dortmund's most coveted prince and the future of German football, to see which brother can improve their team and more successfully carry out the Laudrup legacy.

It's not as though I submitted a €5M bid and had that accepted; I met his release clause. Also, as you'll see, Brian isn't going to let this happen without a fight! I'm not cheating

Tallery
5 years
Surely that is cheating....

Only teasing. You're not the type of guy who would do that, Interested to see how the situation pans out.
Login to Quote

ARSENAL_ruleZ: THANK YOU for understanding, goodness gracious. It will be interesting indeed to see how things turn out!


"What the fuck do you think you're doing?!"

"Well?!" Brian was about ready to throw his fist at a wall, to smash the phone against his desk, toss the newspaper with the Reus headline into the fire, anything to let out the rage that was building up inside him. How dare he?!

"Don't tell me to calm down, Michael! Stop fucking with me like this!"

Michael sighed exasperatedly on the other end. His brother was rarely ever like this; it took a lot to really get him angry, but when he was angry, like this, there was no containing the hate. All he wanted now was to find a way to lower the phone volume.

"I just met his release clause, Brian. That's all." Michael's voice wavered a little as he tried to explain himself in as soothing a tone as he could manage. Now he was the one listening to silence, as Brian steamed on the other end.

"You've always thought you were better than me, didn't you."

That one was like a backhanded slap to the face. Michael opened his mouth to reply, but no words came, even as his lips stood gaping.

"You've always known you were better. The better footballer, the better son, you're that goddamn Ramkilde's kid's hero, and now you want my best player."

Again Michael tried getting a word in, but Brian drove on, his voice growing louder and angrier as his long-concealed jealousy came to the fore.

"I told you about Ramkilde, I told you I'd turn him into a star, so what'd you do? You signed him yourself, just to say you were better than me again. And now, you want to make sure I know, so you try to sign Marco."

Michael put a bit of steel into his voice as he replied icily, "I met his release clause, Brian. This isn't personal. I'm improving my team. That's what I'm paid to do, damn it."

There was a pause again, as neither knew what to say. Brian broke the deadlock, his words spat across the phone in disgust.

Laudrup threw down the phone.

Shanked
5 years
Which laudrup threw down the phone?
Login to Quote

Neal
5 years
Shanked: It's all about the ambiguity

Feliks: As you can tell they have a very constructive relationship