Verdinho
5 years
First time I've read this. You've got a very good story going here! Congratulations for your consistency and presentation in what is (Correct me if I'm wrong) your first story. Bags of money rolling in and out of the Guiseppe Meazza and you have a very young and exciting teams on your hands, now! Having a top season too, so keep it up!

2014-12-04 14:27#202547 P-KIDDY : First time I've read this. You've got a very good story going here! Congratulations for your consistency and presentation in what is (Correct me if I'm wrong) your first story. Bags of money rolling in and out of the Guiseppe Meazza and you have a very young and exciting teams on your hands, now! Having a top season too, so keep it up!

Thanks I appreciate it, ya a lot of transfers in and out right now. I did a Gladbach story in FM 14 but it wasn't very good and I didn't really know what I was doing haha.

Luis Figo has once again sent shockwaves throughout the football world by bringing in two of the most up and coming young players of the next generation by bringing in strong Brazilian center back Marquinhos and highly rated English right winger Raheem Sterling for a combined fee of $123.5 million, to bolster his squad as he prepares to challenge Juventus for the title. A feat that no one thought possible at the start of the year with their 10 point deduction

Figo has also made everyone aware no one is safe in his squad as he has shipped out two of his best players out in this transfer window. Juan Jesus finds himself on the way to PSG for a fee of $70 million as the big spending PSG came in with an offer that the Nerazzurri could't turn down. Wellington Nem came to Inter in the summer of 2014 from Ukrainian side Shakhtar Donetsk for a fee of $26 million, after picking up 23 goals and 23 assists in 46 games in the year and a half he was with the club before he signed a deal at Camp Nou costing Barcelona $121 million which was another offer that Inter Milan just couldn't turn town
Login to Quote

TaroMisaki
5 years
Almost 200 mio, because of Juan Jesus and Wellington Nem! That is a hugh bunch of money!
You might have enought money, for a big star!
Login to Quote

Verdinho
5 years
All that cash for Wellington Nem & Juan Jesus, plus Marquinhos and Sterling in for less? Figo's laughing all the way to the bank!
Login to Quote

mgriffin2012
5 years
How the hell did you sell Juan Jesus for that much. He told me wanted to go, and Roma were interested and I had to ship him out on loan, with the option of a £2.5m future fee to get rid of him
Login to Quote


Ya I decided to spend the money on potentially two huge star in a couple of years.


That's crazy he was great for me then PSG enquired about him and I tried to high ball them and it worked.
Login to Quote

Icarus
5 years
Finally caught up, your presentation has gotten heaps better I really like what you're doing with Inter <3 Really impressed
Login to Quote

Thanks, I hope I can keep my teams good form going
Login to Quote


Inter Milan have their worst month of the season picking up just three wins, three loses and a tie. They started the month off on the right foot beating Lazio in the first leg of the Italian Cup Semi-Final with a 2-1 win at home with Kempf and Pereyra putting in goals. They picked up another big win in their second game of the month against Roma beating them 1-0 thanks to great defending and a goal from Mexican striker Carlos Fierro. Inter's month went all down hill from there as they lost 3-2 to Lazio in the second leg of the Italian Cup but Inter were still move onto the final off of the away goals rule.


Inter's bad form didn't stop there as they would lose their next Serie A game to Torina 2-1, Martin Odegaard scored on the night for the Nerazzurri. Inter struggled to defend in the first leg of their Europa League tie with Sparta Prague drawing with the hosts 2-2, even though they picked up two away goals Figo expected to win that game easily and was not happy with conceding two goal but thanks to Carlos Fierro and Raheem Sterling they were able to get out of there with a draw. Inter got back to winning form again Virtus Entella even though they struggled to defend again allowing the hosts to score three goals on them but thanks to five goals from five different goal scorers the Nerazzurri were able to prevail 5-3, Januzaj, Fierro, Rozzio o.g, Sterling and Bernard all scored goals for Inter. In their last game of the month Inter lost their third game of the month to Cagliari 3-2 which saw Cagliari move past Inter into second place in the table, Inter dropping into third to end the month, Ranocchia and Bernard scored goals for Inter in this game. 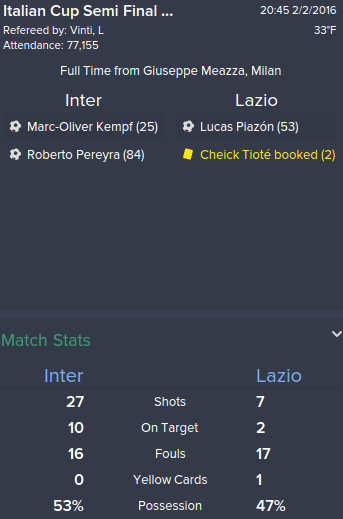 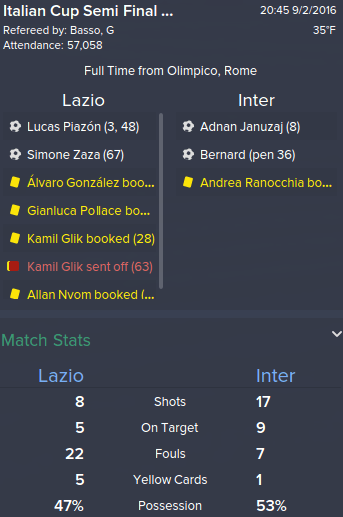 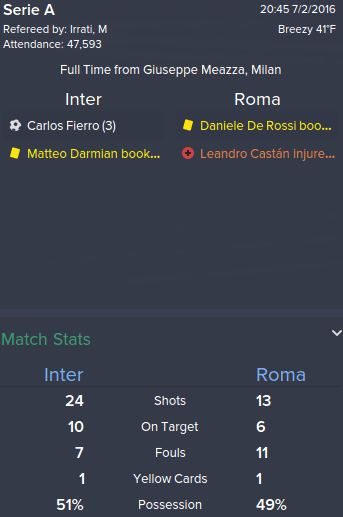 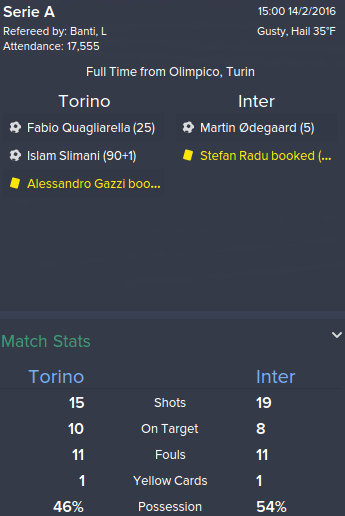 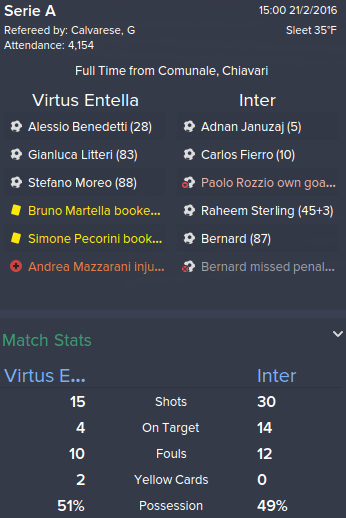 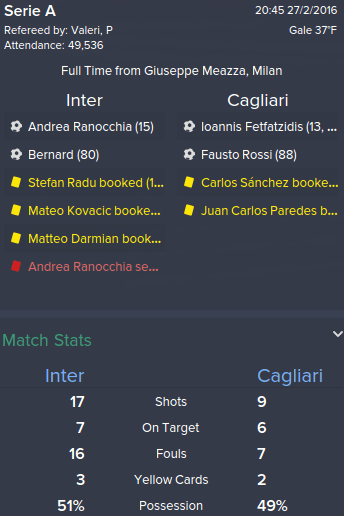 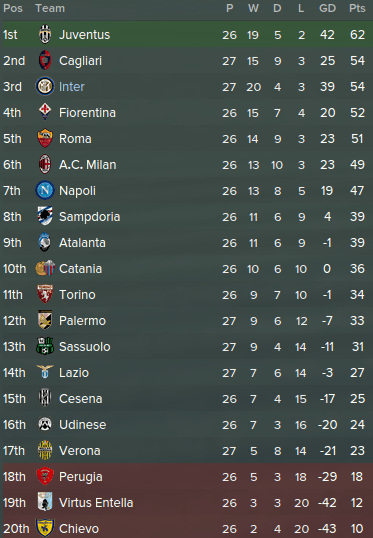 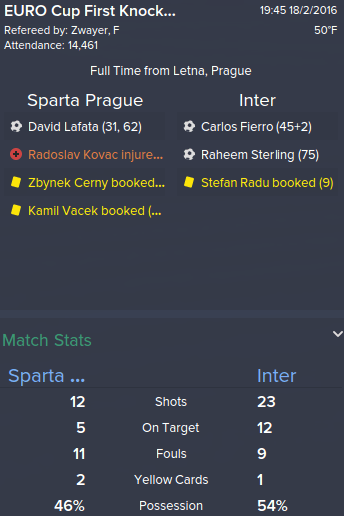 Player of the Month - Adnan Januzaj

http://static.goal.com/395500/395546_heroa.jpg
Adnan Januzaj has once again won the Player of the Month Award. Even though the team didn't have a good month, he still lead the way for the Nerazzurri with two goals and two assists in the six games he played this month for Inter. Januzaj come to Inter last summer from Manchester United for $69 million and so far he has lived up to that price tag.
Login to Quote

Neal
5 years
Really crap month, but thankfully you're still within distance of Juventus to catch up! C'mon you Nerazzurri!
Login to Quote

Icarus
5 years
Not a bad month but... Virtus Entella scored 3 past your defenders mate, you should revise your tactical approach a little

Ya that definitely raised my eyebrows a little bit at least we scored five on the day.


Ya definitely a bad month but thankfully Juventus didn't have the beat month either.
Login to Quote


After a bad month of February, Inter were able to rebound by winning all seven of their games in the month of March. Four of these wins came into the Europa League as Inter were able to knockoff Sparta Prague in the First Knockout Round 7-3 over the two legs, the second game which finished 5-1 in Inter's favor with two goals from Bernard, Fierro and one goal from Raheem Sterling. In the Second Knockout Round the Nerazzurri took on Dutch side Feyenoord who they beat 10-4 over the two legs with a 5-1 and 5-3 win. Bernard scored four goals over the two games with Sterling and Kovacic each pitching in two and Fierro pitched in one of his own along with Bakkali.


Inter also took all nine points from their month in Serie A when they played Sampdoria, Sassuolo and Perugia. The Nerazzurri beat Sampdoria 2-1 thanks to a goals from wingers Raheem Sterling and Bernard. The front three of Fierro, Sterling and Bernard all fired home goals against Sassuolo which propelled them to a 3-1 victory. Inter finished their Serie A month against Perugia where Inter were able to win the high scoring affair 4-3, Adnan Januzaj bagged himself a brace with Sterling and Fierro also scoring for the Nerazzurri on the night. 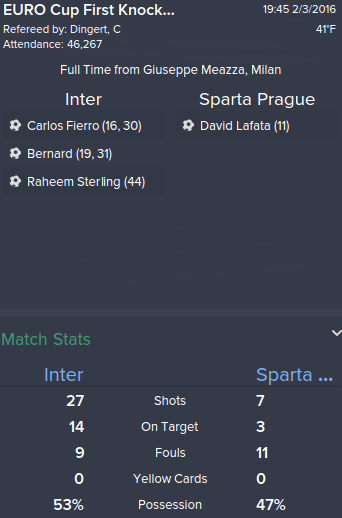 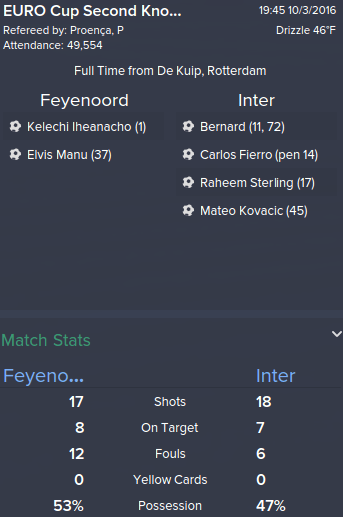 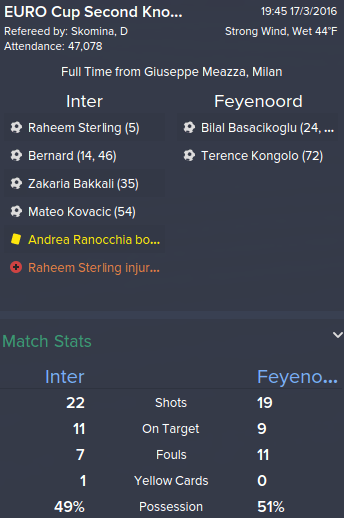 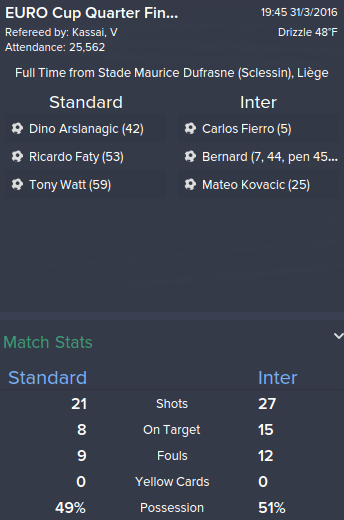 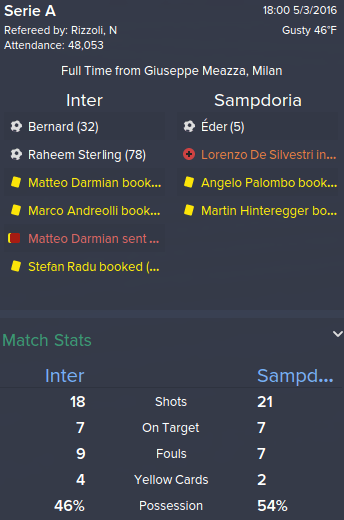 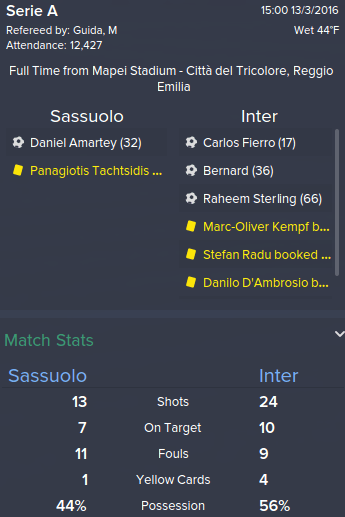 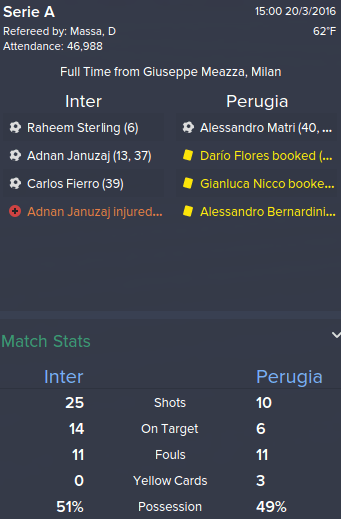 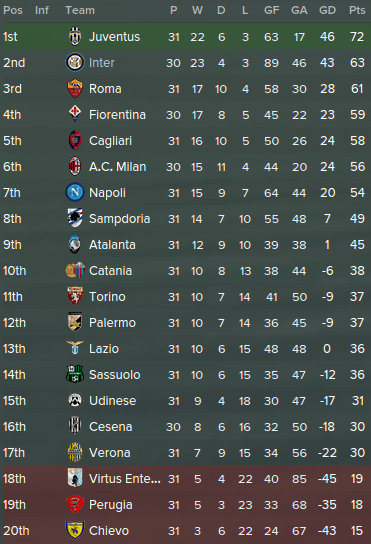 Player of the Month - Bernard

http://www.standard.co.uk/incoming/article8697813.ece/alternates/w620/Bernard-Brazil.jpg
Bernard led the for Inter this month leading them to seven victories in the month of March earning himself the Player of the Month award for the month of March. Bernard picked up a massive 11 goals and 5 assists in the month of March to see himself rise to take the lead in goals in Serie A and tied for the lead for goals in Europa League with Everton striker Romelu Lukaku.
Login to Quote

OUFC2k14
5 years
Good story so far:) Picking up some good results along the way... you've done pretty well to keep your first story up for this long!
Login to Quote