Walter
6 years
pompeyblue Thanks pompey, I'm hoping we can make a late charge for promotion and surprise a few.
Josh_MU Thanks Joshwa!
Neal There aint no playoff spots it's automatic promotion Venezuelan Lower Division outfit Hermandad Gallega F.C have reportedly become the interest of a mystery foreign tycoon, reports are suggesting. The identity of this potential owner is still unknown to reporters but negotiations have begun with current owner Kelvin Mea Vitali.

Hermandad Gallega, currently sitting fourth in the third tier of the Venezuelan football league system, are managed by Englishman James Bond and were founded in 1998. They are based in Valencia, Carabobo and play their home games at the Polideportivo Misael Delgado.

Despite being probed for answers chairman Mea Vitali refused to comment on the situation, reiterating that all the details of the takeover saga were to remain confidential and that business between the two parties had only very recently commenced.

Asked as to whether he could shed any light on who this foreign tycoon could be, Mea Vitali, 46, again declined to comment. James Bond, manager of 'Los Gallegos' also was unable to reveal anything either. Whether because he's also in the dark about the situation or he's under instruction from the club's hierarchy is unknown.

Fans of the club are hoping that the takeover is swiftly completed. Hermandad Gallega have run into financial trouble of late and a tycoon would promise significantly raised funds and possibly a quick ride to the top.

If this takeover is successfully completed questions have been raised as to whether manager Bond, 37, will successfully retain his job. The Englishman, who has no prior managerial experience, was a surprise appointment and it remains to be seen whether Mea Vitali's appointment was the right one.

Neal
6 years
Oh, you could get a tycoon! Now you'll be able to spend upward of €200 each window!

It'll be some villain for Bond to fight of course!
Login to Quote

It'll be some villain for Bond to fight of course!


This.
Login to Quote

Walter
6 years
Neal So comical, you.

Josh_MU We'll just have to wait and see The festive season was packed with action

Amid rumours of a takeover it was quite hard to stay completely focused on the task ahead: retaining our position in the league table. The players and I also tried hard to maintain some concentration ahead of what was set to be a gruelling two months of action.

Defensive training was the focus of the week's training ahead of a must-win game against bottom club Victorianos FC. It seems to have paid off as we kept a clean sheet alongside goals from Eduardo Cañas and Freddy Granados. The scoreline depicts a fairly even match but we were by far the more comprehensive team.

In the next two weeks we had away journeys away. First we faced Fundación Cesarger and that was a relatively easy game. Two goals from Eduardo Cañas and one each from Carabali and Archila meant this game ended up being a walk in the park. Next was the match against Academica Emeritense, which was marked by the return of star striker Jesús Reyes. Him and his partner Cañas combined to score one each for themselves in a match that finished in a 2-2 stalemate.

Following that we secured a routine 5-3 victory over struggling Pellícanos FC before we hit the hardest part of this two months report. Firstly, ULA FC are a side that are promotion contenders and despite two Víctor Archila goals we were defeated pretty badly by the final score of four goals to two.

Estrella Roja, much the same as ULA FC, were in and around the top three places on the standings and a win against us would all but put them even further ahead. Eduardo Cañas kept up his fantastic scoring record but it was to avail as we sunk to consecutive defeats.

The clash with mid-table side Atlético Píar was a case of same old same old as we fell back in to bad habits. Comprehensively ahead, we let another lead slip and nearly threw away another certain three points. I'm starting to think that this has more to do with my players' concentration levels than our defending abilities.

Two big wins against Estudiantes de Caroní and CA Lopez Hernandez rounded off what could be considered a successful month. I'm still a little bitter about the two losses to our promotion rivals but these two victories improved morale and boosted goal difference. 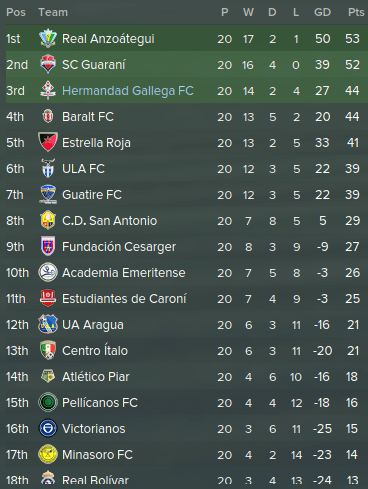 Even after losing out to both ULA FC and Estrella Roja, the form that sandwiched those two defeats means we catapult into third place, the final promotion spot. The problem is that this situation could easily flip on us. We are eight points behind second placed SC Guaraní and we are even on points with Baralt FC. Furthermore, Estrella Roja is only a win away from leapfrogging us.

November-December Player of the Month 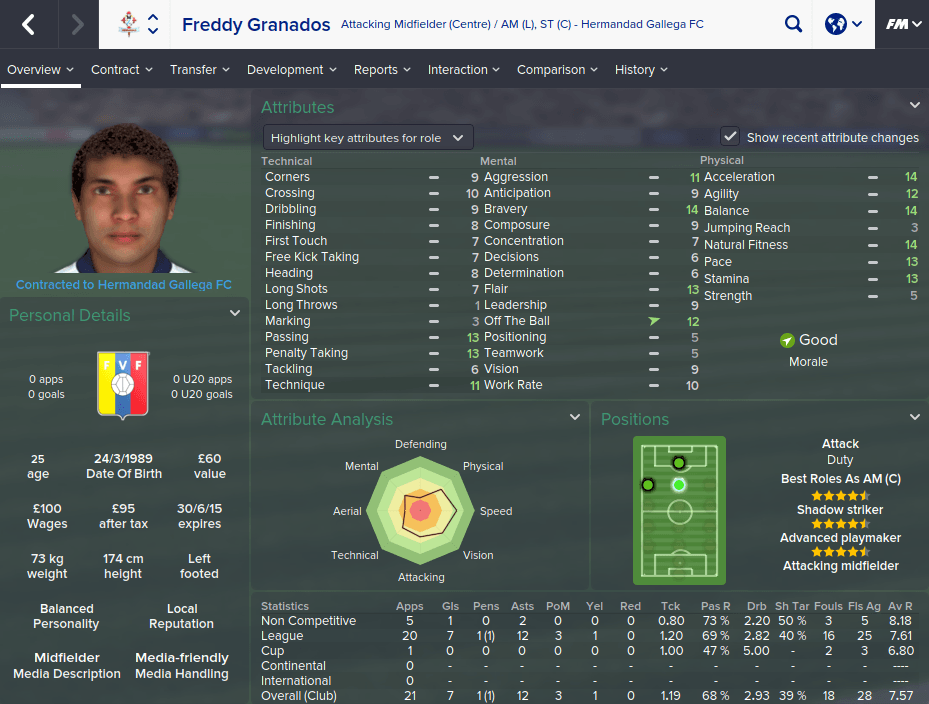 It would've been easy to give this award to Eduardo Cañas, our in-form target man. He knocks in goals nearly every game and is certainly one of our key players and in no way does he not deserve this award. But winger Freddy Granados knocks in his own fair share of goals and usually creates his strikers', too. For this reason, the award goes to him.

Contrary to news reports, I am as in the dark as everyone else with this takeover. I have no clue who this tycoon is and at what stage the negotiations are in or where they're being taken place. The current chairman has asked for my patience and confidentiality and I will oblige. What I am worrying about most is my job - what happens if I lose it?
Login to Quote

Josh_MU
6 years
Great update Walt! Some very positive results but you're slacking with your images!

Haha jokes aside third place is a very good position to be in and I wish you the best of luck for the rest of the season.
Login to Quote

Neal
6 years
Cañas is in some amazing form, nice to see he is being aided by Granados. Defense needs some work, though, you are leaking a lot of goals

Feliks
6 years
Nice finish to the year, a good springboard for 2015 and the rest of the season!
Login to Quote

Walter
6 years
Josh_MU lol yeah, didn't notice that when I previewed xD.
Neal Yeah defence is our weak link, need to work on that.
Feliks Yup it was, thanks Feliks.
Login to Quote

pompeyblue
6 years
A tough two months of fixtures, but a really good set of results! As Feliks said, hopefully you can use this as a springboard for more success in the new year.
Login to Quote

Walter
6 years
pompeyblue Thanks pompey, it would be nice to carry on the momentum. Thank you for the comment.
Login to Quote

Kelvin Mea Vitali has taken action regarding the potential takeover at Hermandad Gallega FC, placing a transfer embargo on the club while takeover talks reach the final stages of negotiations and a deal may be struck within the next few days.

The saga has been dragged on for a while now and rumour has it negotiations have been anything but smooth as the Venezuelan chairman attempts to sell his club to a mystery foreign tycoon.

While the embargo is in place, manager James Bond will not be able to make any transfers - in or out. Whether he will be able to cope with such restrictions is unknown, but the Englishman will just have to cope with the squad he has. Problems could come to the fore should an injury crisis take place.

Members of Hermandad Gallega are still waiting for light to be shed on this tycoon who has taken an interest in the Valencia-based outfit. No clues have been dropped by the current owner and the possible heir to Mea Vitali has managed to steer clear of all media attention.

The question still stands for most fans about this new owner and if he will seriously be commited to the Hermandad Gallega cause. Is this tiny club just his hobby or cash cow? Or does he honestly see a bright future for the club? Only time will tell.

Josh_MU
6 years
I hope some Russian billionaire invests in you.
Login to Quote