@Atoobie - Yes, I did do them myself

Griffo
6 years
A team in New Zealand might wanna speak to you about something... haha *cough* SAME NAME *cough*

mgriffin2012
6 years
This is looking really cool man, looking forward to seeing where it goes!
Login to Quote

Jack
6 years
The detail going into this is absolutely outstanding 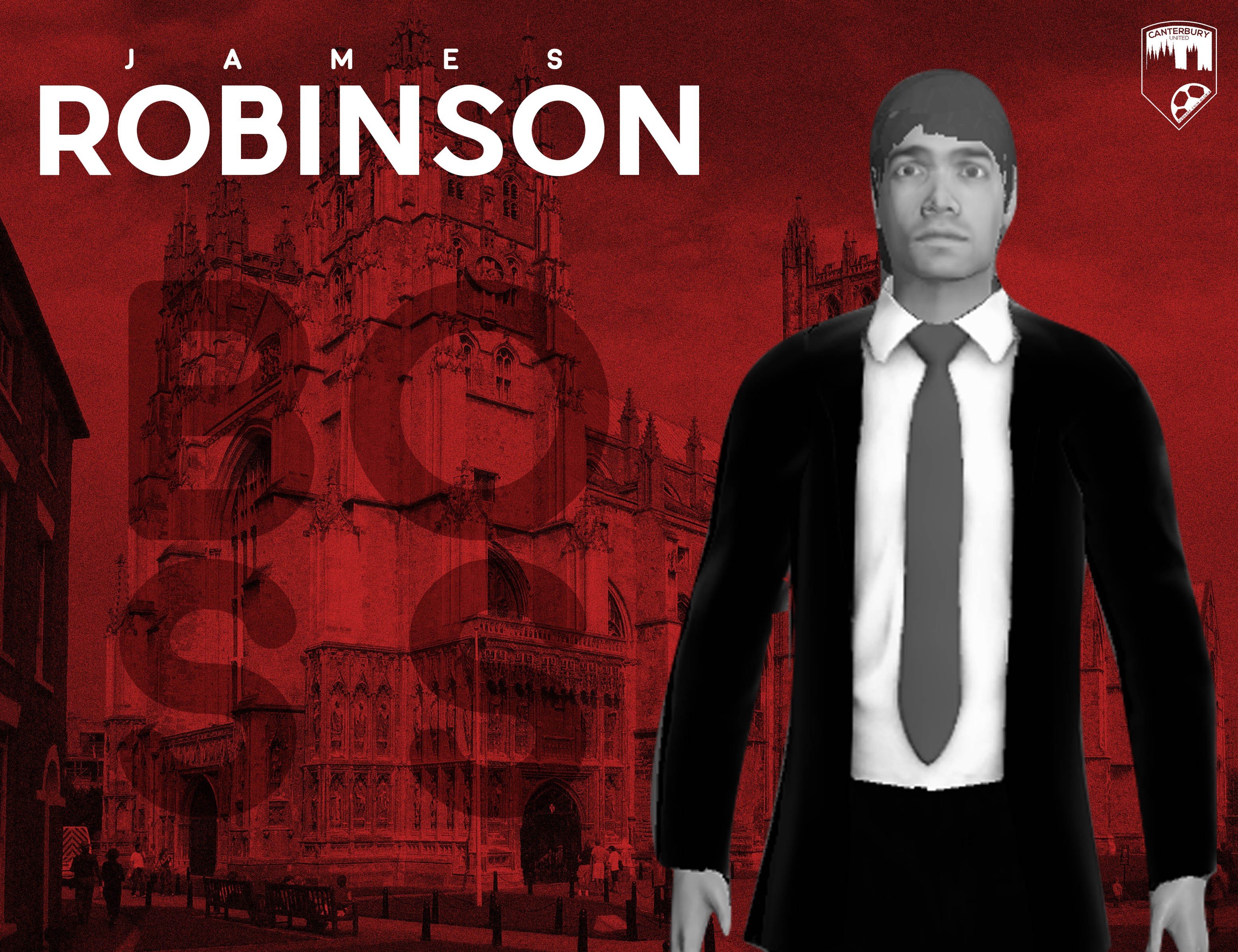 Billionaire-backed club Canterbury United have today announced that twenty-year-old Englishman James Robinson will be the first manager in the club’s history.

Robinson will take charge with immediate effect and will want to get this reign underway in the best way possible. A statement released by the Bishops Chairman George Wilmont.

George Wilmont:James was a fantastic candidate. He is young, has tonnes of potential, and wanted to bring new, interesting ideas to the table, something that all the others didn’t bring to the table. We are delighted to announce James as our manager and we will give him time and patience to achieve what we know he can.


The twenty-year-old was born in Canterbury, but moved up north when he was young, before returning to the city to attend the University, he told the club’s website.

James Robinson:I am from here, but I moved away, but I wanted to come home for Uni. When I saw the advert, I was intrigued and put my name down, I never thought I’d get the job at all. I’m very honoured to have the opportunity to manage the club for the first time, whatever happens – my name will go down in history! All jokes aside, I have a clear idea of where I want this club to be, how I want to play, and I have a few targets in mind for potential signings. I just can’t wait to get started!


Someone with no experience in football coupled with such a young age will make people wonder if Robinson can get the squad, which is yet to be announced but potentially has a lot of players that are older than him, believing in his ability and that he has the right skill set to take Canterbury United to the heights that the board expects.
Login to Quote

Tallery
6 years
@Griffo - Get them to give me a call

Balik
6 years
You know...I would've been a better choice...but he's alright I guess...
Login to Quote

ImDonkey
6 years
Why does he look so sad?
Login to Quote

Atoobie
6 years
I agree with Donks, your manager going through some hard times?
Login to Quote

Griffo
6 years
I dunnnoooo seems like a shady bloke to me!
Login to Quote 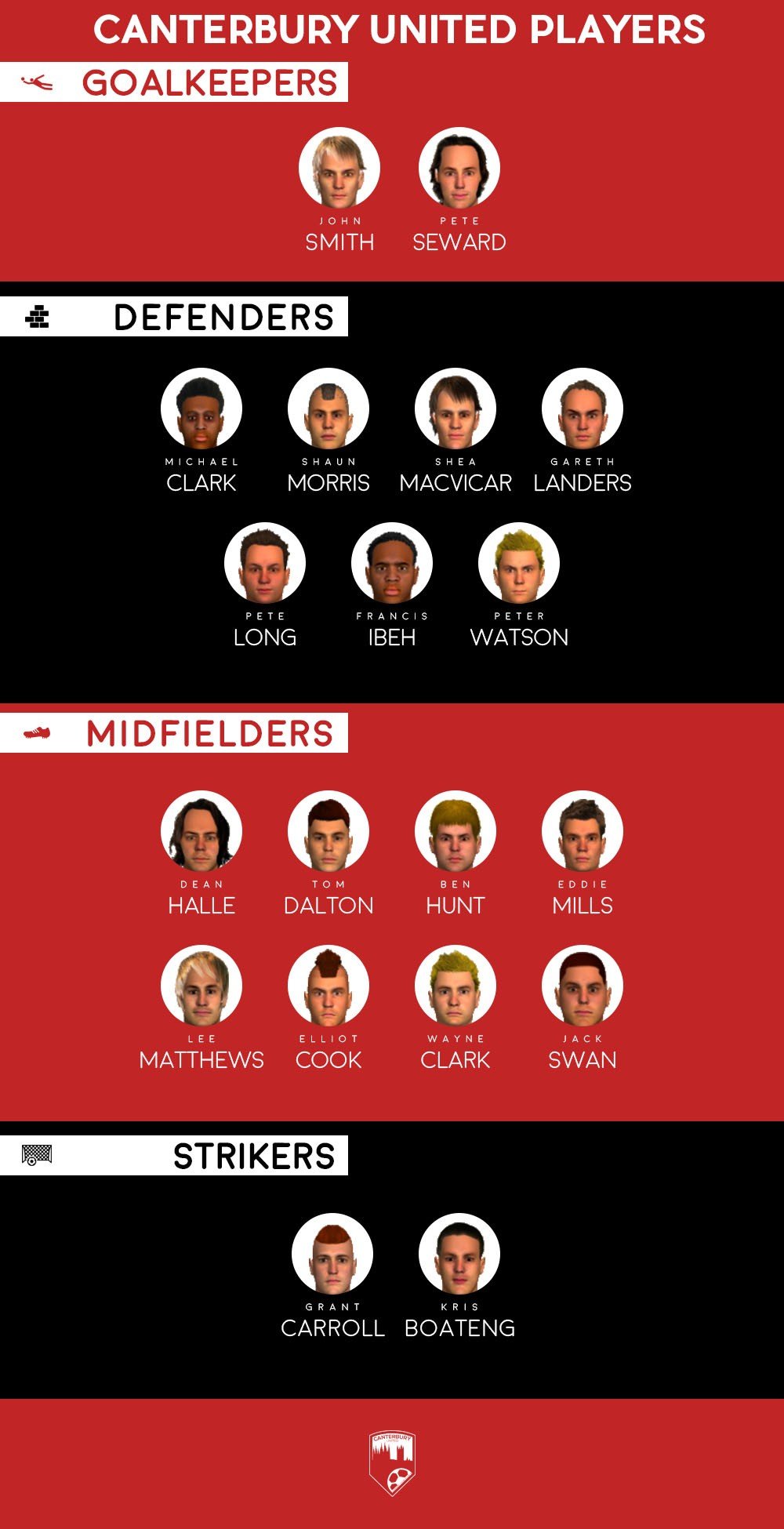 Canterbury United have today announced the club’s first playing staff for the upcoming season. They have managed to recruit eighteen players for the first team, who will work under new boss James Robinson, and eleven youth team players, who are spread out over the U21 and U18 teams, who will be looking to make the breakthrough into the first team soon.

John Smith is the eldest member of the first team, being twenty-eight years old, and is likely to be made club captain. There are four players in the first team who are sixteen, and seven who are still considered teenagers. Manager James Robinson was quick to praise his new first team – saying they had ‘quality to go far’.

James Robinson: I’m very happy with the recruits. They’re all local, very talent lads, and they can take our club far – and they have the quality to go far in the game themselves. We obviously need to make some signings, as we have a few shortages in the squad, like we have no natural left back or centre midfielder. But that takes nothing away from the lads, they’re all quality – I can’t wait to get to know them and win a few trophies with them.


We also spoke striker Grant Carroll, who said he couldn’t wait to be a part of the club’s history.

Grant Carroll:I am very happy to be here, I want to make history with this club. It’s not like any other club I have played for, we have pressure, and we’re under the spotlight considering the people we play for and the press interest. But I can cope with that, I can’t wait to get started.


Despite his age, the players were impressed with boss Robinson, according to defender Michael Clark.

Michael Clark:[James] Robinson looks like he’s a quality manager – he’s got real potential. His ideas for how to go about things. I think he is going to impress a lot of people that doubted him. I’m looking forward to playing with him.


The club still haven’t confirmed what league they will play in next season – or where for that matter – and it remains to be seen just how they can perform under an inexperienced boss.
Login to Quote

mgriffin2012
6 years
Hopefully that is a squad that is full of potential to go on and get the results you need!
Login to Quote

BeanyUnited
6 years
I am really liking this story has the potential to be something special!
Login to Quote