Tallery
6 years
@Atoobie - yeah, it should be!
@Justice - Thank you, elder
Login to Quote

TheArchitectFM
6 years
This story is fantastic. The graphics are class man, will be following it.
Login to Quote

Tallery
6 years
@BeanyUnited - Thanks!
@TheArchitectFM - Thanks a lot man, glad to have you on board!
Login to Quote 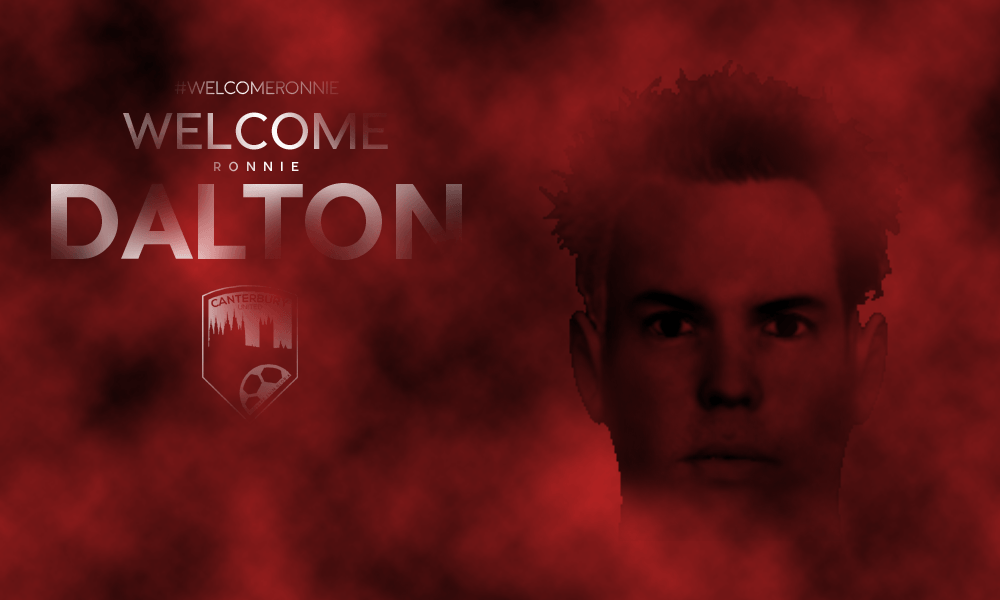 Canterbury United are delighted to confirm the transfer of Ronnie Dalton to the club with immediate effect.

The attacking midfielder joins from Isthmian League First Division North side Maldon and Tiptree on a free transfer, but due to rules regarding players under the age of twenty-four, are required to pay a £5000 compensation fee.

The sixteen-year-old told the press of his delight of joining Canterbury United.

Ronnie Dalton:Yes, I have taken some steps down the pyramid. But Canterbury came and told me they wanted to make me the centre piece of the team – how can I refuse that? Any player, at what any level, would find that attractive. And also, to be a part of this club’s history – the first ever signing and to take part in the club’s first season is a truly special thing for me. I am honoured.


Despite being so young, manager James Robinson said that he has the potential to carry the club to many successful seasons ahead.

James Robinson:Ronnie is a class act. I watched him play for a youth team a few years ago, while I was doing my badges, and I was astounded by the talent, he’s a special player with lots of ability both on the pitch and off – he’s a nice lad – and I am looking forward to working with him in many successful seasons ahead – hopefully!


Dalton, who shares a surname with now teammate Tom Dalton, although not related, hails from Maldon and supports the club he moved from – but will be hoping to adapt to life at the Bishops as quickly as possible.

Ronnie Dalton:Being so young, sixteen – just finished my GCSEs – and moving here is a big thing, but if I want to succeed, I need to adapt quickly and learn to make it where I want to be.


The attitude will certainly impress fans, and his willingness to learn will certainly help him go far in the game, and fans will hope it will be in a Canterbury United shirt. 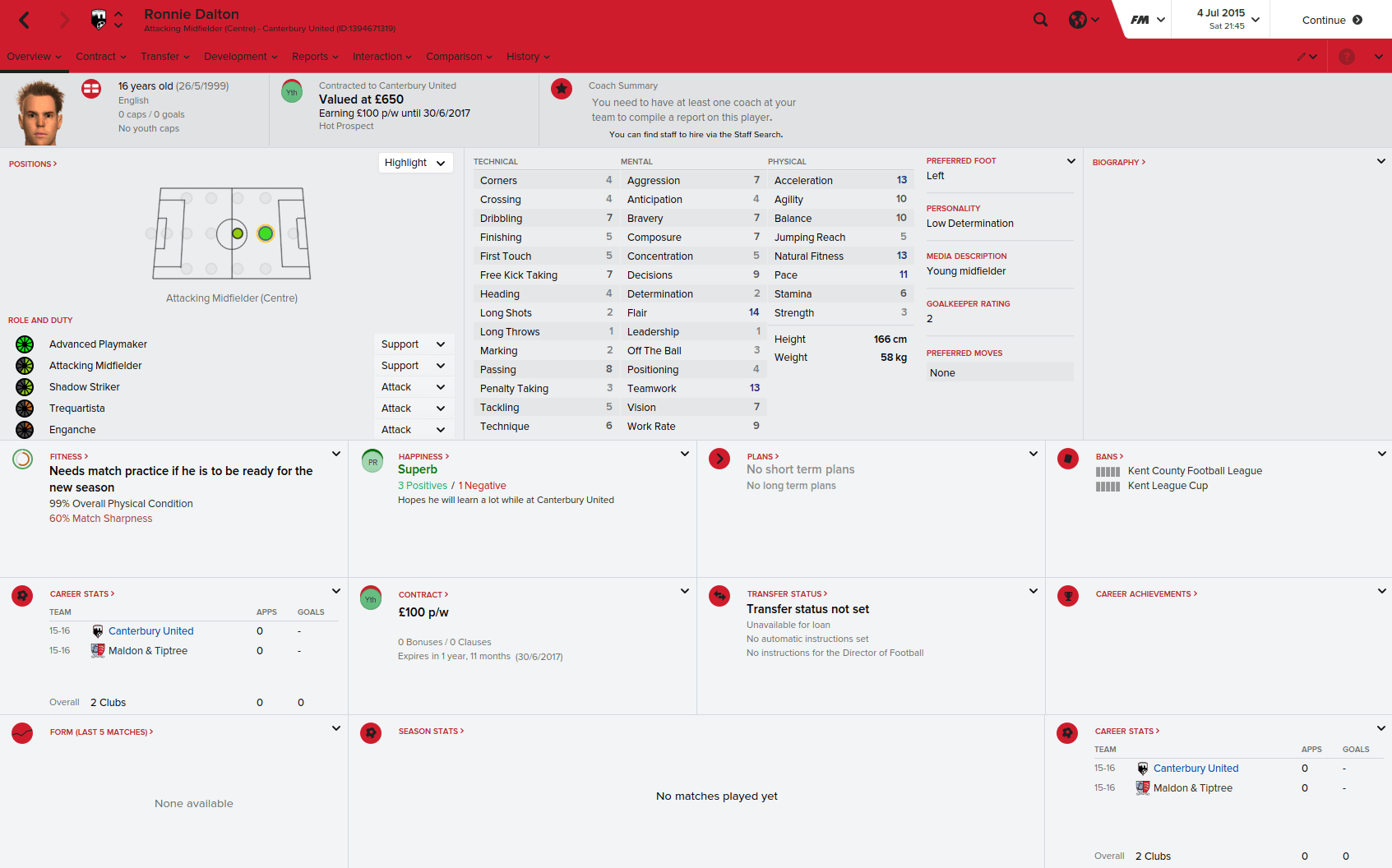 Griffo
6 years
No idea who he is, good luck to the lad!
Login to Quote

Soze
6 years
Hopefully he is worth the money, but it's not like that's of any worry to you...

Tallery
6 years
@Griffo - He's a sixteen year old regen, that may be why

@Soze - haha, I hope he does perform though!
Login to Quote

Jack
6 years
At 16 he looks like a prospect for now and years to come - great buy!
Login to Quote

mgriffin2012
6 years
Loving the update man, hopefully he can become a real star for you!
Login to Quote

MJK46
6 years
Holy crap dude this is amazing and I love the graphics.
Login to Quote

@Justice - You may just have read my mind 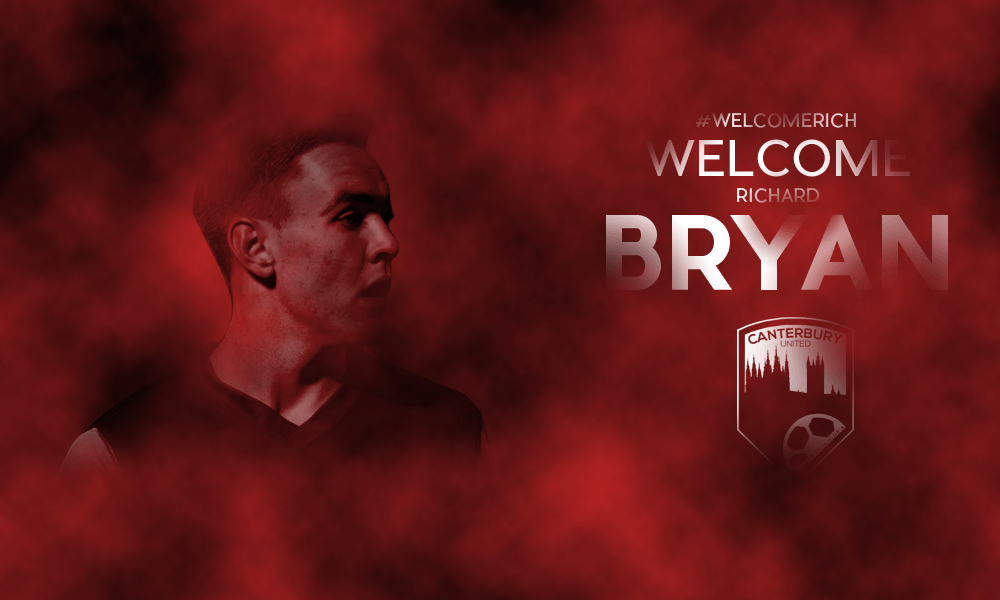 Canterbury United are delighted to confirm the signing of centre back Richard Bryan on a free transfer. The twenty-one year old had been a free agent since his contract expired at the end of last season, and told the club he was looking forward to playing regularly again.

Richard Bryan:I am very happy to sign. This is a club that can offer me a lot now and in the future, and I hope to stay with them for a while. I want to play week in week out, that is the only real way you improve as a footballer, and Canterbury United offered me this, so I had to join. I am also very much looking forward to the challenge of taking them to the top.


The Irish defender started his career at English club Aston Villa in 2010, but failed to make the breakthrough in two years, and was subsequently released. He then joined Hinckley United, who at the time were in the Vanarama North division, and made six appearances for the club.

After a season, he left to join Chasetown, who he joined on a free transfer, and played a season in the Northern Premier League First Division South, before re-joining Hinckley United the following season.

He once again left after a season, and was a free agent for the summer before linking up with Canterbury United. Boss James Robinson was quick to praise the Birmingham-born defender, who also holds and English passport, saying he was a ‘brilliant defender’.

James Robinson: Richard is a very good, young defender who will contribute lots to the team over the next couple of years. He has experience at a higher level, which is also very important if we want to get where we are aiming for – it means he’s been tested against better players, and come out alive. He’ll be a very valuable player for us.


Signing a deal until 2018, he will be hoping he can lead the club to a few promotions and provide a few memorable moments in the years to come. 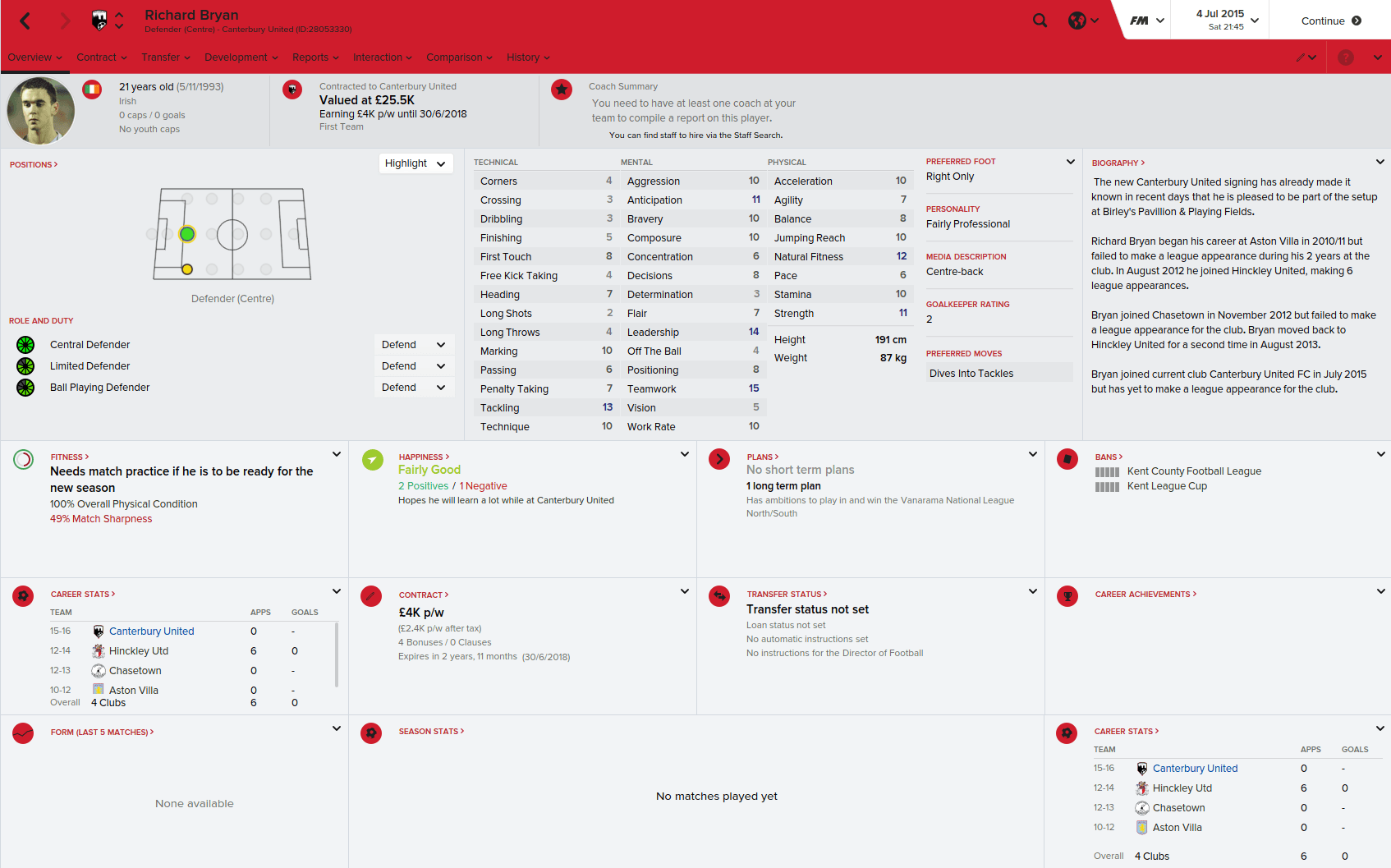