Love how all the owners are self promoting
Login to Quote

CoreyE
6 years
Great story so far. Keep it up, cant wait for you to make the conf south and lose to hayes ;).
Login to Quote

@CoreyE - It may take a while 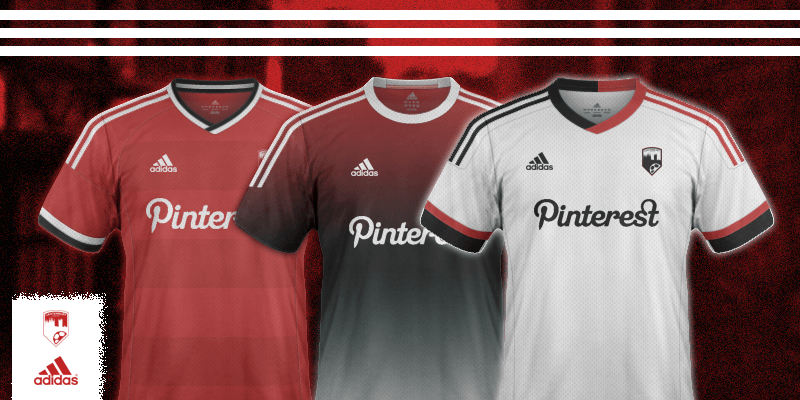 Adidas today have revealed the kits for Canterbury United’s maiden season, just days after announcing a £37.5million kit deal with the Bishops.

The home kit is the club’s light red colour, with slightly darker hoops providing a bit of depth to the design. The colour is Adidas’ famous two colour design, with black being the top and the under layer being white, which extends out to Adidas’ signature three stripes on the shoulder. The cuffs and the bottom of the shirt are also two colour, with white this time being the top strip, with black being to border. The shorts will be the light red with black three stripes down the side, and the socks will have the same colour scheme but with Adidas’ three hoop design. 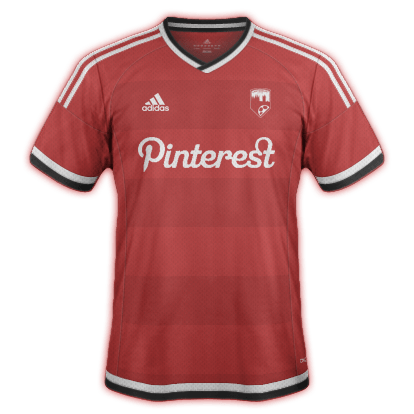 The away kit features a gradient design, with the club’s three colours fading down the shirt – the red being at the top, fading to black, which fades to white, which is carried on through to the shorts and socks, and they have black stripes that are synonymous with German sportswear giants. On both the home and away kit, the club crest, Adidas badge and Pintrest logo are white and one colour. 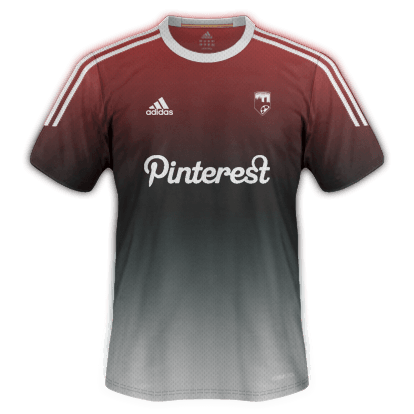 The third kit is mainly white, with light red and black features. The top half of the kit is split, with the left side being black and the right side being the red that will become the image of the club and the inspiration behind the name Project RED due to its unusual shade giving it identity. The bottom of the kit features three stripes – possibly homage to Adidas – which is the red sandwiched between the black. The club crest, which sits on the chest, is the full club crest, and the Adidas and Pintrest logos appearing in black. The shorts base colour is also white, with the stripes running down the side in the red, and the socks following suit. 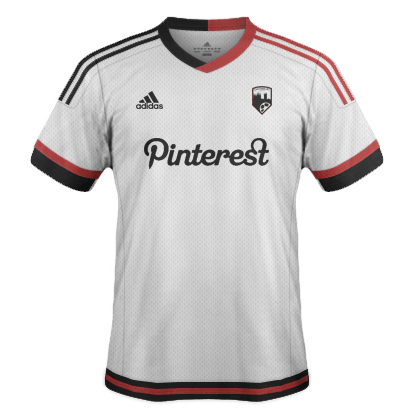 The players seemed hugely positive about the design, with striker Kris Boateng telling the club’s website that he thought they were ‘stunning’.

Kris Boateng:The kits are possibly the most stunning things I’ve ever seen, they’re beautiful- almost as beautiful as my girlfriend. They’re a fantastic thing to wear for our first ever season, and I am very excited about putting them on for the first time. I’ll certainly be framing one!


Manager James Robinson was also quick to praise the Adidas designers, saying the training gear – which has not been publically unveiled yet – is also nice.

James Robinson:I know you guys haven’t seen it, but the training stuff is also really nice, I cannot thank Adidas enough for what they have produced! It’s stunning! The lads all really love the kit and hopefully it will bring so many positive memories and go down as one of the most successful kits in the clubs history! 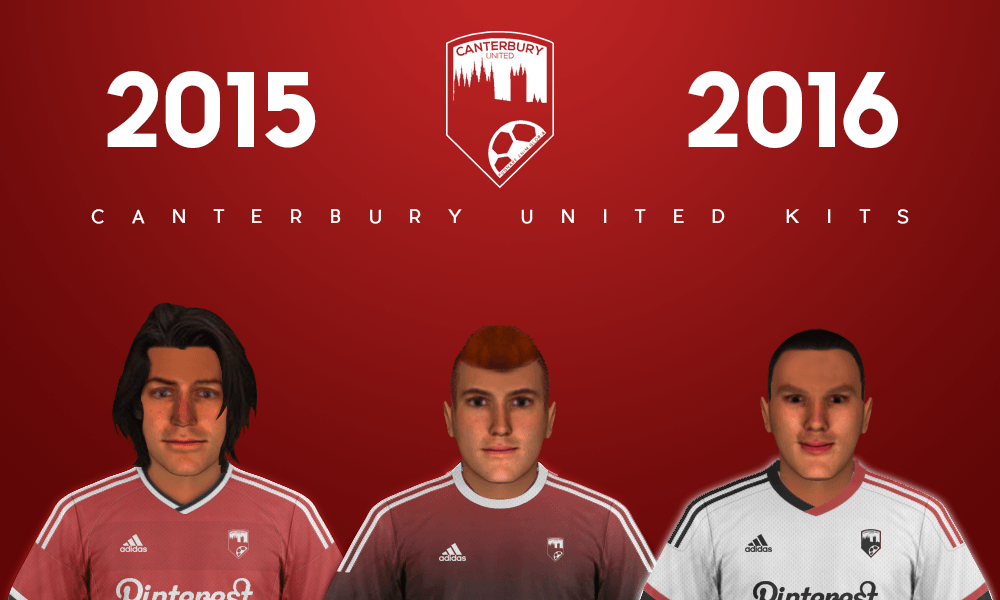 With the club now confirmed in the league and with kits to play in, the players, staff and fans will be anticipating the clubs first game, which will reportedly take place against Reigate Priory, who play in the Surrey Elite Intermediate Football League at the Birley's Pavillion & Playing Fields in a few days time.
Login to Quote

C.J.Lippo
6 years
If Canterbury's football looks half as good as their kits I'm sure they'll be winning fans in no time!
Login to Quote

Jack
6 years
Superb kits man, and it's great how your players are loving them too 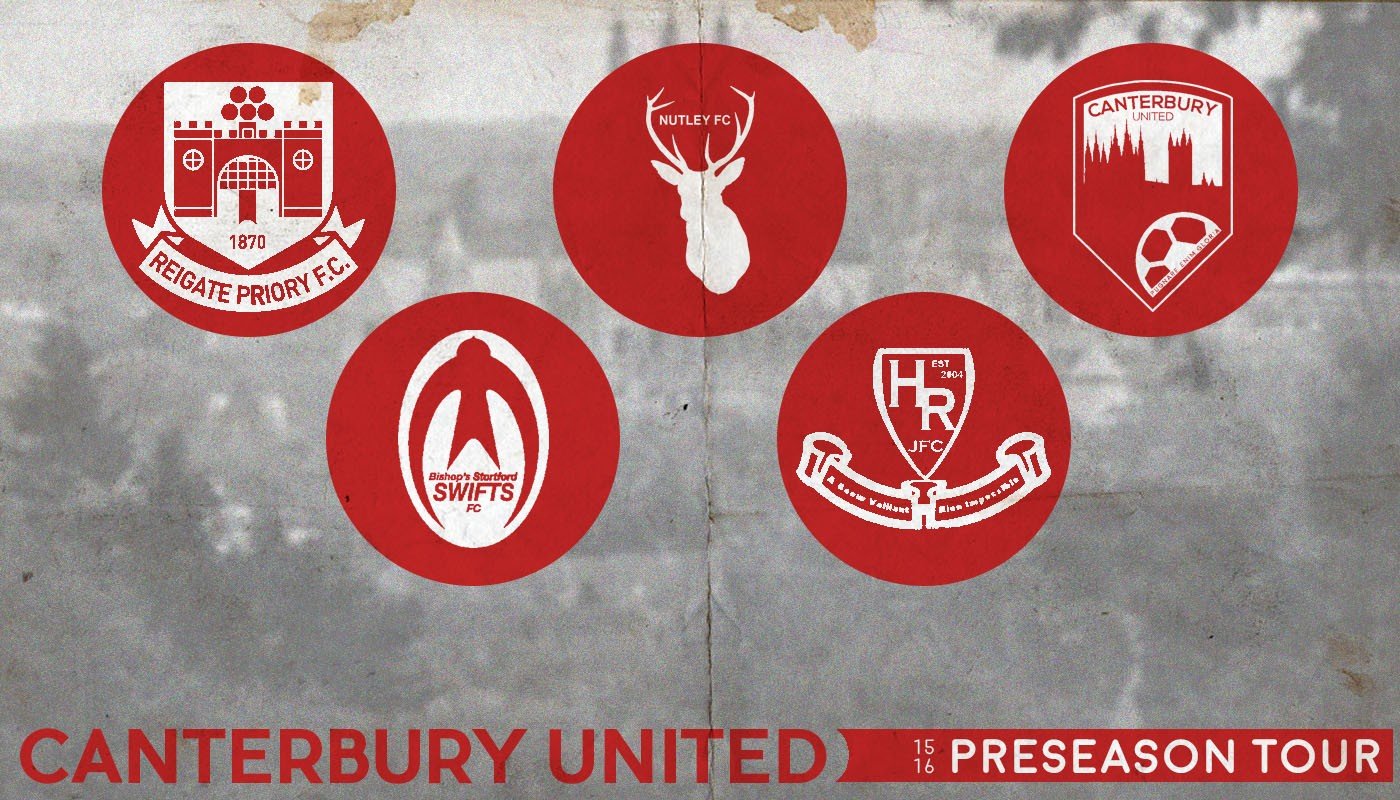 Canterbury United can today confirm the club’s first ever preseason tour which will see them play teams from Surrey and Sussex before kicking off their league campaign against Kennington in just over a months’ time.

The first ever Canterbury United game will take place at the home venue, Birley’s Pavillion & Playing Fields, in ten days’ time against one of the oldest football clubs in Surrey, Reigate Priory, who – funnily enough – call Reigate home.

When asked about the first test, manager James Robinson said he was excited.

James Robinson:I am really looking forward to the first game, it will be a proud moment for me, a local lad realising the dream, and the players as it’s their chance to get their name in the history books. It’ll be a tough test against a good side, and we’ll be able to see what we are made of.


The Bishops will then travel 62 miles south-east to play Nutley FC a week later and then will travel 81 miles north to face Bishop’s Stortford Swifts before rounding off their preseason four days later against Heath Rangers, who play their football in Lindfield, which is back in Sussex, and a one and half hour journey.

Midfielder Dean Halle said he was looking forward to showing the fans what he could do, and put his name into the history books.

Dean Halle:Preseason will be great, it will be an opportunity to really get to know the other lads that we will be playing with next season, and hopefully for many, long successful time ahead. I want to impress the fans with my performances and the teams as a whole, and it will be nice to know that I will, hopefully, take part in the club’s first ever game.


After preseason, the club will participate in its first ever competitive game, playing Kennington away before making their competitive home debut a week later against Greenways.
Login to Quote

Griffo
6 years
Graphics on the mark as per usual, keep up the good work!
Login to Quote

mgriffin2012
6 years
Im with Griffo on this, the graphics are quality!
Login to Quote

Atoobie
6 years
Loving the kits buddy! Proper great work, and looks like a fun little pre-season too
Login to Quote

Justice
6 years
Not bad graphics at all, young Tallery.
Login to Quote