Hi there, my name is John Warrington and this is my journey in football (manager). After beginning my career back in 1997, I had a playing career spanning 20 years starting and ending at Tranmere Rovers with spells at Liverpool, Swansea, West Brom, Preston and Leicester in between. Now though it's time for the next chapter in my career. I'm going to leave this post free to keep a track of my career.

Here is my playing career in full (Simulated on FM18).

Watch this space
Login to Quote

So after my retirement, I decided to spend some time away from the front line of football, working within the Centre of Development at Tranmere doing some coaching and continuing to work on my coaching badges. Fast forward to July 2019 and I've found myself a little restless as of late, therefore when Warrington Town approached me asking if I'd like to take the manager's job vacated by Paul Carden in the summer, I jumped at the chance.

The goal for this season is simple, promotion to the Vanarama National League North. We have the squad to do it and the media are predicting a 2nd place finish for us. Warrington play their home games at Cantilever Park which holds 2,000 people. It's one of the smaller grounds at our level but I think it does the job for us for now. As you'd expect for a semi-professional side, our facilities are either basic or at best poor. Given that I want to be able to bring in young players from our development squads, improving our youth set-up will definitely be one of my priorities moving forward.
Login to Quote

ScottT
3 years
Warrington certainly have the financial capabilities behind them to aid their cause, mainly due to runs in the FA Cup in recent times. There are some decent sides in the Northern Premier League though like South Shields and Scarborough Athletic, so even the first hurdle won't be easy. Best of luck.
1
Login to Quote

Griffo
3 years
Warrington... not a bad rugby league side... but football hmmm, best of luck
1
Login to Quote

2019-11-21 17:05#262988 ScottT : Warrington certainly have the financial capabilities behind them to aid their cause, mainly due to runs in the FA Cup in recent times. There are some decent sides in the Northern Premier League though like South Shields and Scarborough Athletic, so even the first hurdle won't be easy. Best of luck.

Thanks very much. I'm actually surprised by the level of teams at this level. Will be a challenge for sure

The aim is to eclipse the achievements of the rugby league side......I hope
Login to Quote

Trotman9165
3 years
Good luck mate, will be following with interest love a journeyman save.
1
Login to Quote

So the first thing I've noticed since joining the club is the lack of staff here! Here's a quick look at the current team I have to work with.

As you can see, it's paper thin and in desperate need of a couple of new additions. My aim now is to find some new recruits including a new Chief Scout and a new Head Physio. I'll report back here once I've managed to sort things out.

Speaking of paper thin...the squad isn't in the best of shape depth wise. On first glance I can see that I'm going to need to find a left-back and a couple of centre-backs in order to strengthen us ahead of the new season.

2nd July
I won't be going into detail with our friendly fixtures but our first one saw our first team take on our U23's.

9th July
Former Wolves midfielder Ross Finnie becomes the first signing of my managerial career as he joins on a free transfer.

Griffo
3 years
Interesting way of writing updates, haven't seen this before, I quite like it
Login to Quote

ScottT
3 years
There's some real quality in the squad. A good mix of youth and experience in the form of Steve Jennings and Jack Dunn, in whom both have Football League experience. They'll be useful assets this season, I feel. Some good acquisitions in both the playing and non-playing staff. The experience of Darren Bent is always welcome.
Login to Quote

With pre-season done and dusted, here is how the Warrington Town squad is looking going into the new season in the Evo-Stik Premier League

Friday 2nd August
Callum Harris joins us on a one week trial.

A fantastic start to my managerial career! I would have liked us to score more but I can't argue with three points on the board and a first clean sheet.

Tuesday 6th August
Midfielder Callum Harris signs for the club on a one year deal.

Thursday 8th August
The board bring in George Marshall as our new Director of Football.

It kind of set the tone for the game when Jack Mackreth scored with just 16 seconds on the clock. From them on, we were the better team for the majority of the game, aside from a 5 minute spell in the first half, during which Witton Albion scored. A superb three points in my first away game as boss.

Not a good one for my heart this one. They took an early lead which was disappointing but we roared back with three goals. Their second with just over 15 minutes to go made things a bit nervy for us, with them missing a great chance with 5 minutes left. Thankfully for us, Danny Racchi saw red for them late on which killed the game off.

Another great win in the end. I thought that we weren't really at the races in the first half, despite going in with a one goal lead. For the first time in my managerial career, I had to give the players a piece of mind and to their credit, they dominated the second half and deserved to win.

The first time we've dropped points this season and it was more than a little annoying. We had enough chances to win about three games but didn't take any of them before they then hit us on the break in the second half. That goal took it out of us and we never recovered. Disappointing. 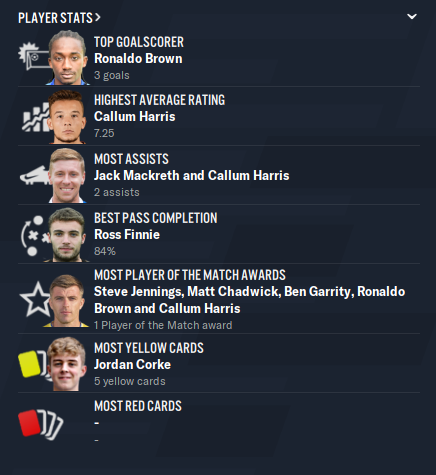 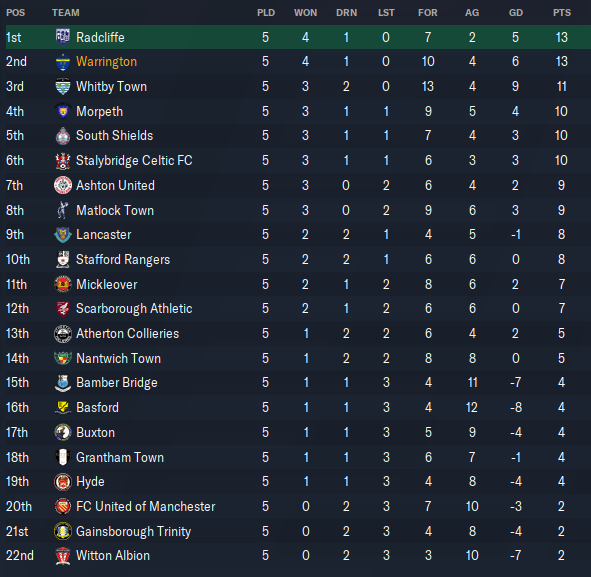 ScottT
3 years • Edited
A very good start to the season. I'm surprised to see newly promoted Radcliffe Borough accompany you at the top of the pile, albeit we are only five games into the season. A slow start by some of the more favoured clubs for promotion could aid you in your bid to secure promotion. South Shields will be your toughest challengers personally. They have a budget that could attract some excellent players to this kind of level. Josh Amis' departure to Southport strikes me as an interesting one considered he didn't start in either of the two games he was available for. Either you've missed a trick or you have a strong pool of options, I'd lean towards the latter! Have to mention that I love the simplicity of the lay-out. Simple but very effective. Keep up the good work.
1
Login to Quote

TheLFCFan
3 years
Won't pretend to know half as much as Scott! But second is a good place to be, lets hope you only continue to go up! Good start, going unbeaten, keep it up!
1
Login to Quote