crisrko
8 years
Just played it, we had an average game, and Wallyson is slowly going out of form, which is a problem, considering I loaned out Markovic. Granada had the luck of a point-blank header in 93rd minute. I'm still wondering how they managed 3rd last season!
Now, I must pray Granada defeats Sporting, because if I loose to Bayern, and Sporting wins, I'll have to consider myself in Europa League.
Login to Quote

crisrko
8 years
Mass-exodus firing after Northwood departure! Northwood decided to put an end to his reign at Steaua, going on a long managing trip to Germany, to take charge of Schalke. Schalke haven't been consistent lately, and he's the best chance for them to get back on track.
"The last manager has driven the club backwards, which can be seen in the poor quality of the majority of this squad. I cannot understand why would've he spent such ammounts on this type of players. I have alot to do!"
The Steaua owner, George Becali, was quoted : "Darral has been magnificent to Steaua, and so I will not be looking at him as a traitor, he done more than I could've ever dreamed off. I hope his replacement would have the same quality".

Northwood will have a hard challenge in Champions Cup, the one and only Real Madrid. 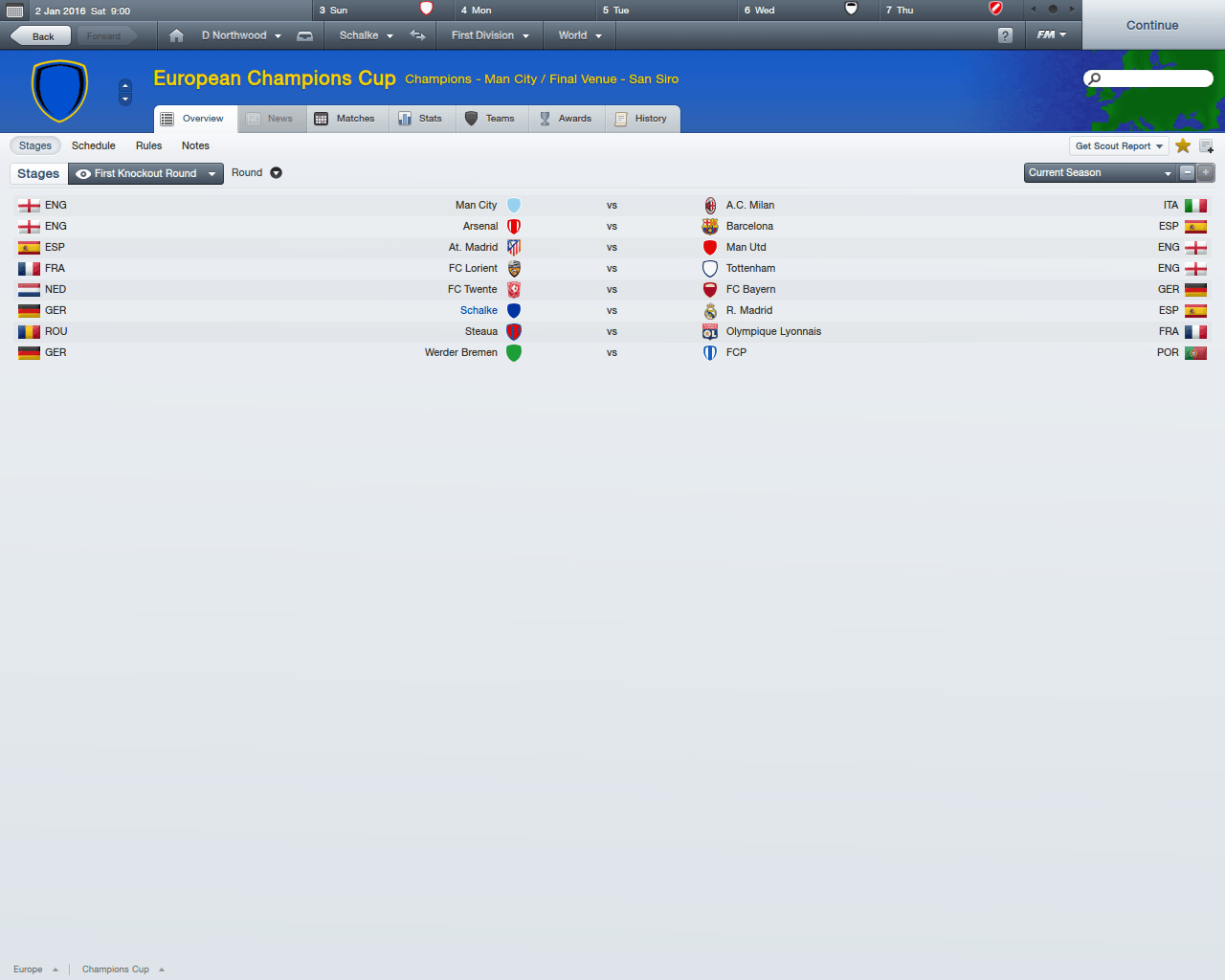 This is the squad. 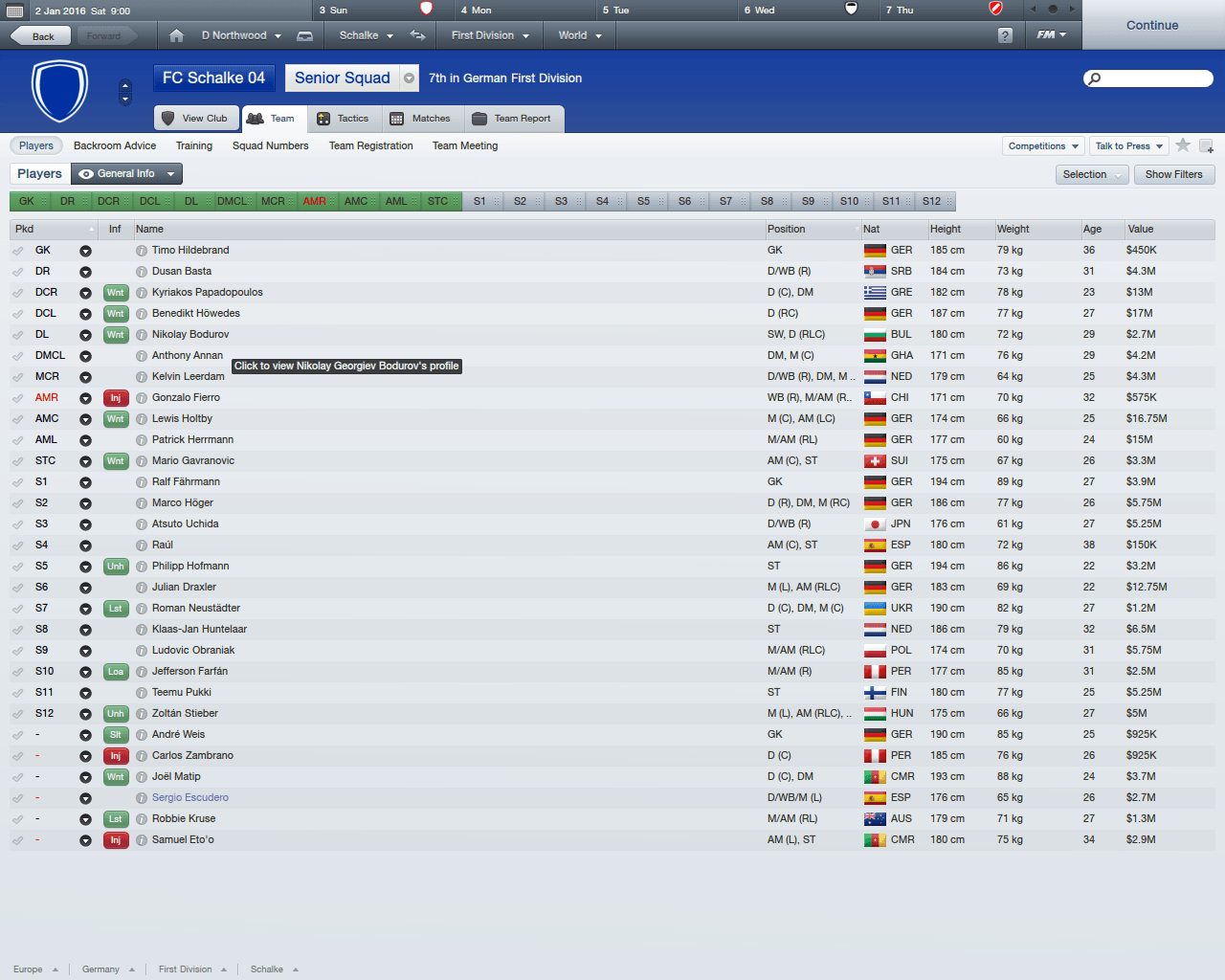 Northwood is looking to sell a few certain players, possibly bringing some of his boys from Steaua, and some on loan/free.
Login to Quote

crisrko
8 years
The Schalke squad has been improved drastically, as you will see in the history below. ter Stegen along with Kravchenko and Nagatomo have joined the squad, being bought by Northwood. Huntelaar, Fuchs, Bastians have left the squad to balance abit the books. 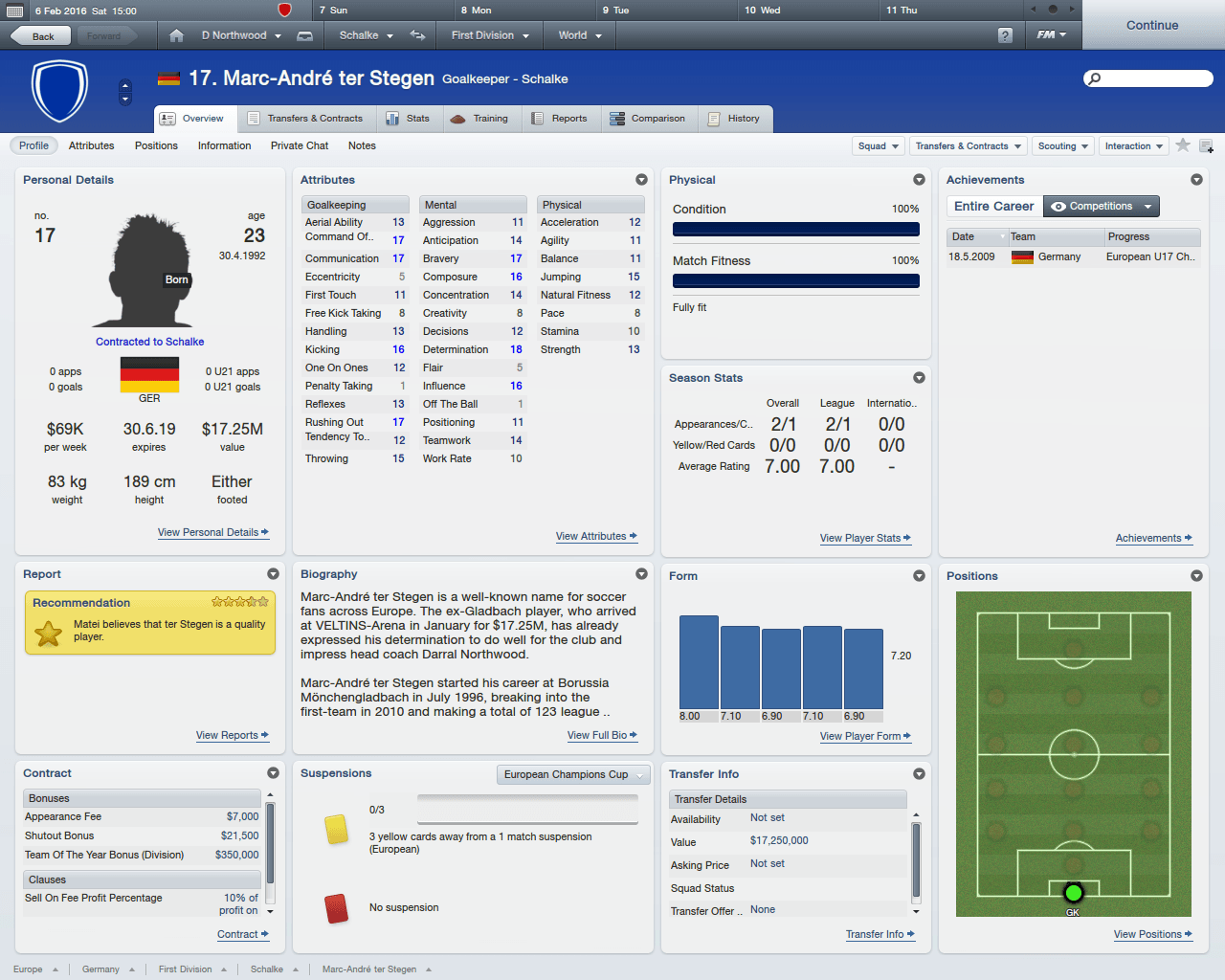 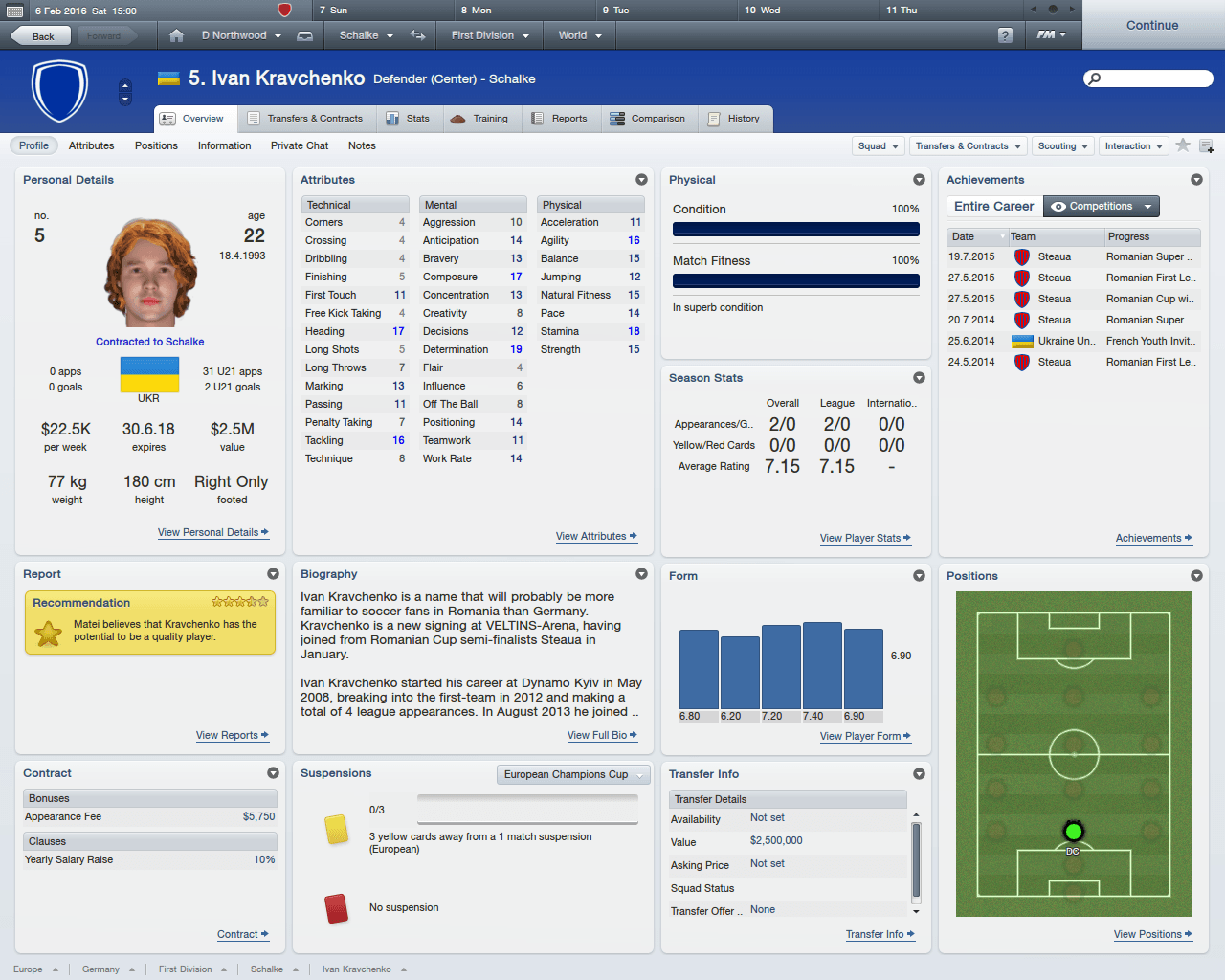 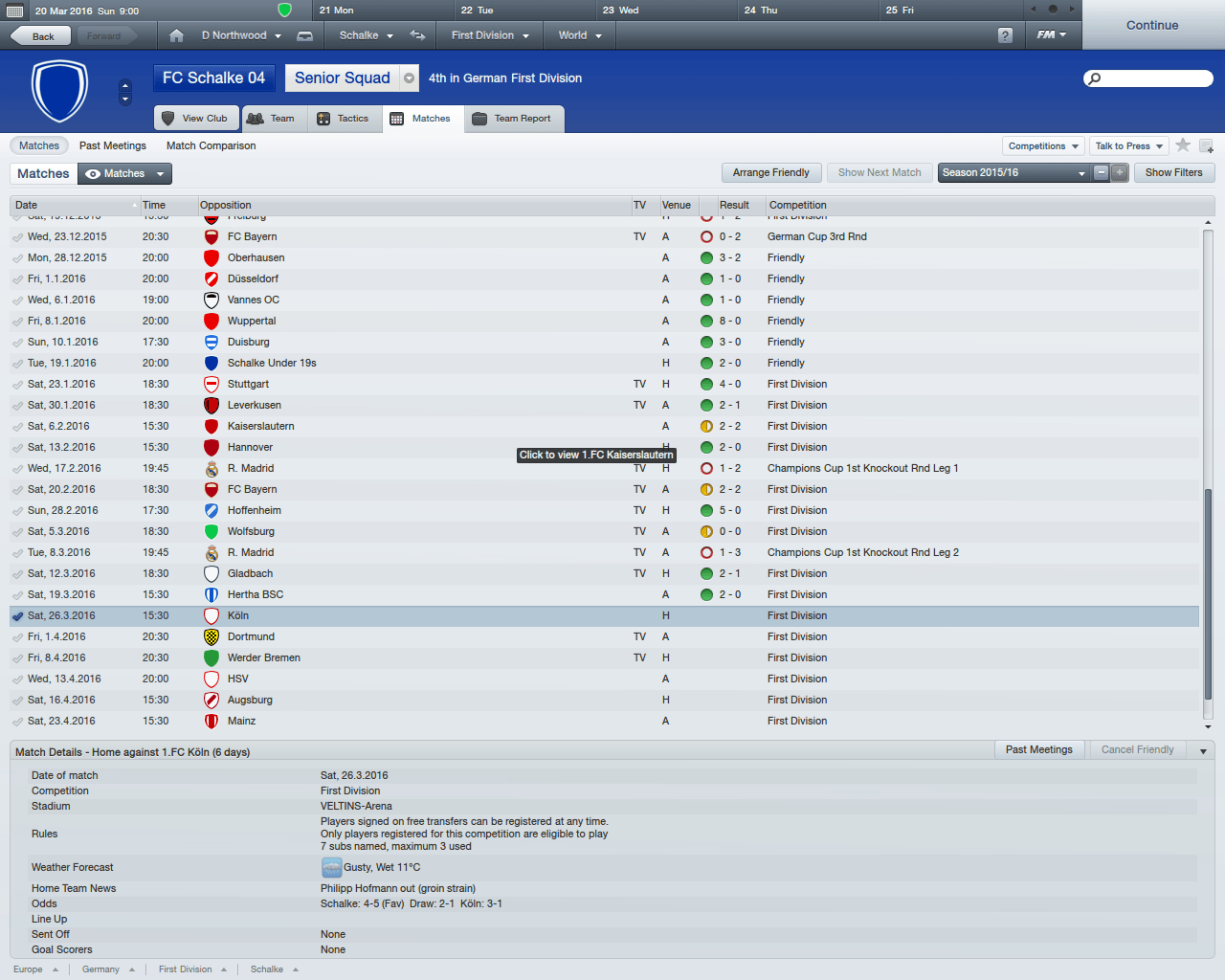 Here you can see the results Schalke made under Northwood's reign. I am STRUGGLING to work with this team, due to the low-par budget and payroll. Carlos Zambrano, a weak defender is complaining about first-team usage, this went net-wide and you can see what people think. 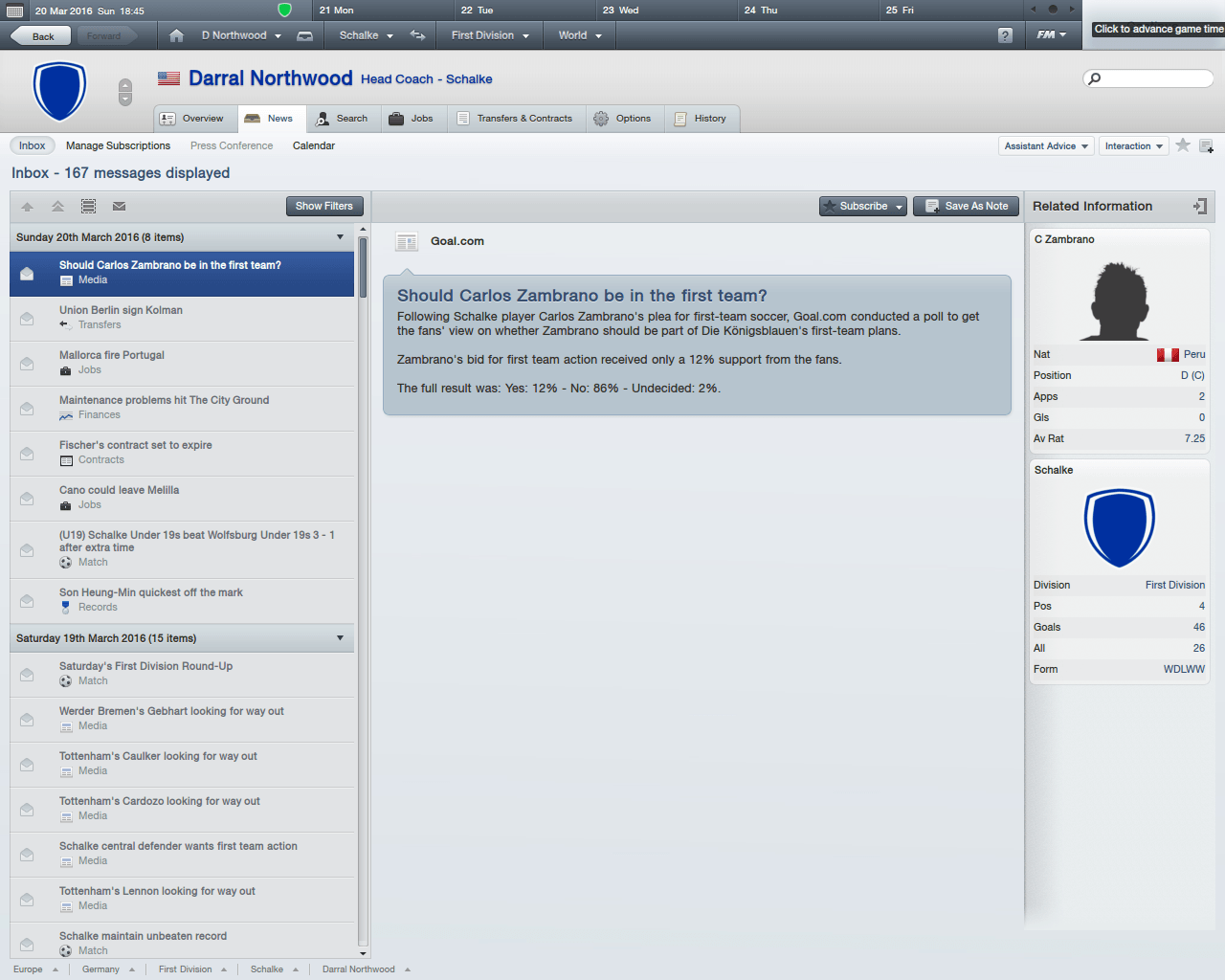 Northwood was quoted by the media : "I am struggling to adapt to this team, I am constricted in any possible way by the low-par budgets and payrolls. It was ten times better at Steaua. Unfortunately, I'm considering about leaving this summer, because I do not fancy another season here, at Schalke."
Login to Quote

The FM Rookie
8 years
Ultimately the decision to leave is up to you. A return to Steau would be great. Great story and keepp it up.
Login to Quote

crisrko
8 years
So this is it! The German First division comes to an end. Schalke secure 2nd spot after a long-battle taken by Darral Northwood and his boys. Schalke come from 8th place and manage to finish 2nd, thanks to the tinkering of Northwood. Even though Northwood is considering his options about leaving, the fans and the board are pleased by the turnouts. 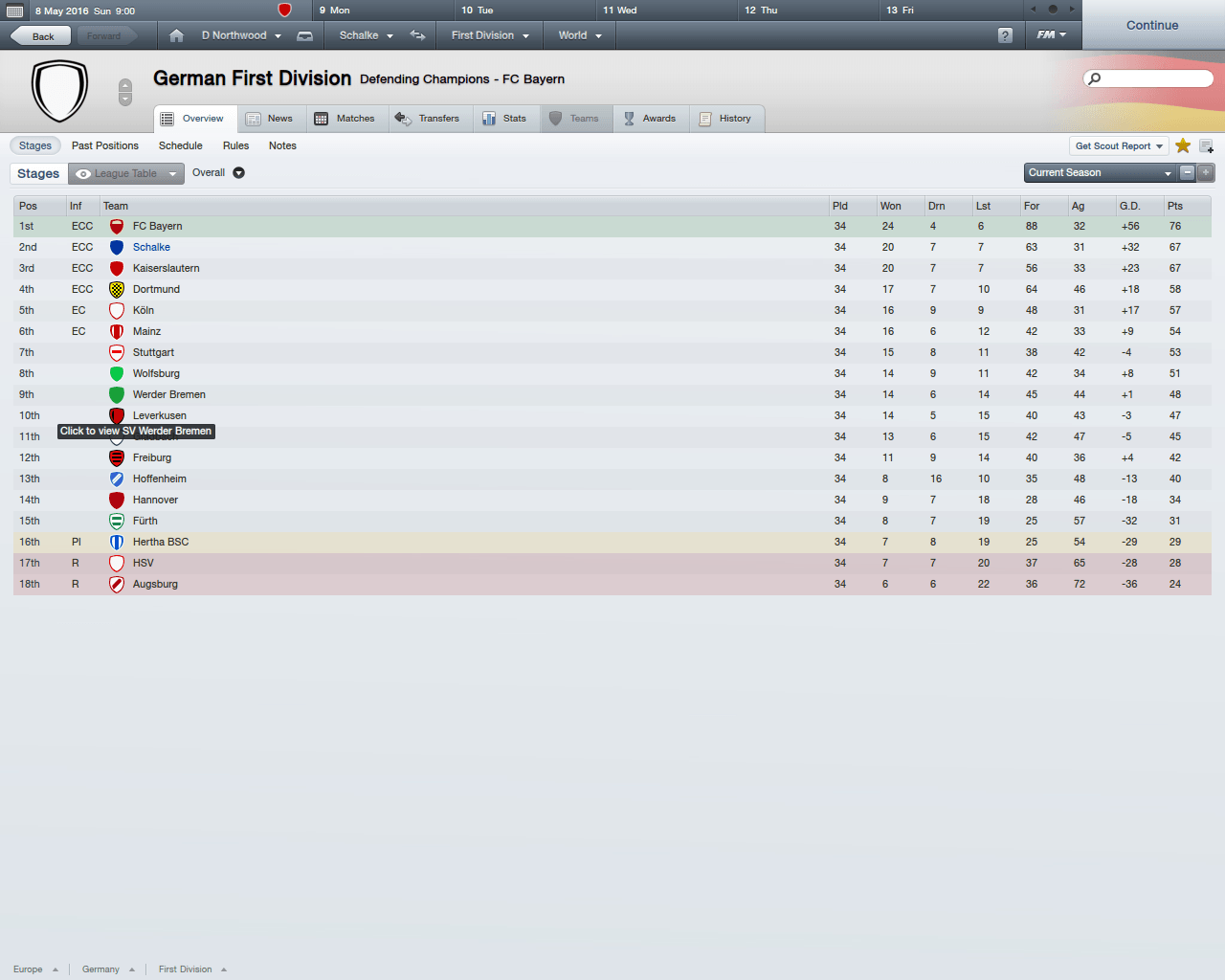 crisrko
8 years
"I am truely delighted to be hired" were Northwood's words this morning, in the press conference as the new ManUnited manager. He is going to manage them on a contract of 5 years, hoping to bring further succes to the club.
"The facilities are fabulous, and I'm glad I am able to manage a team at such a high level."
The transfer budget was undisclosed, but its believed to be at around a hundred million dollars. Now thats alot of money. The fans are hoping the best under Northwood's era, and with all the money and facilities, and the fabulous team, he just can't do a bad job. 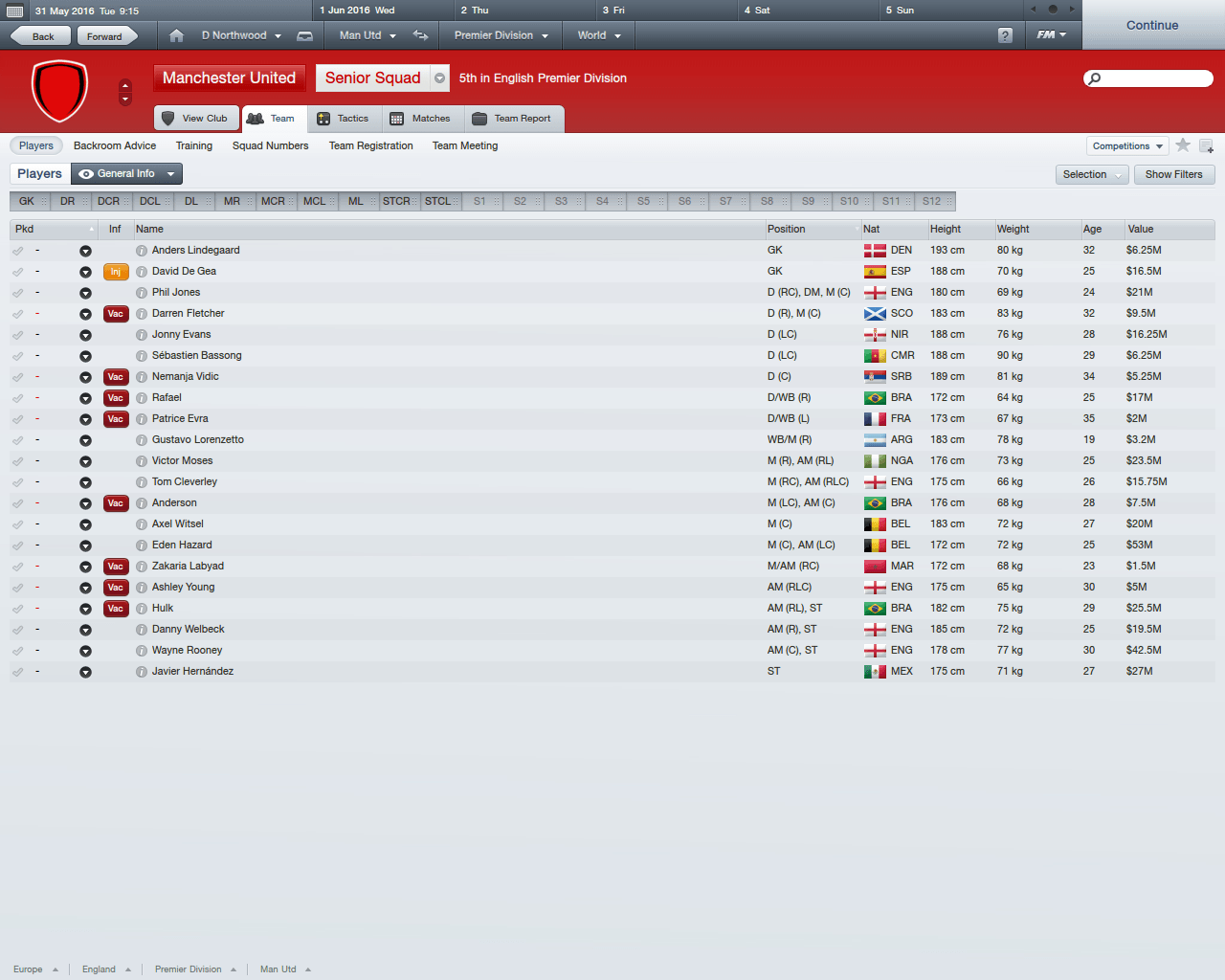 crisrko
8 years
ManUnited have spent a ton of money this summer window for their new signings, and the fans seem to be pleased with them. Northwood has invested around 100 milion dollars this window, bringing to the club the following.
Christian Eriksen 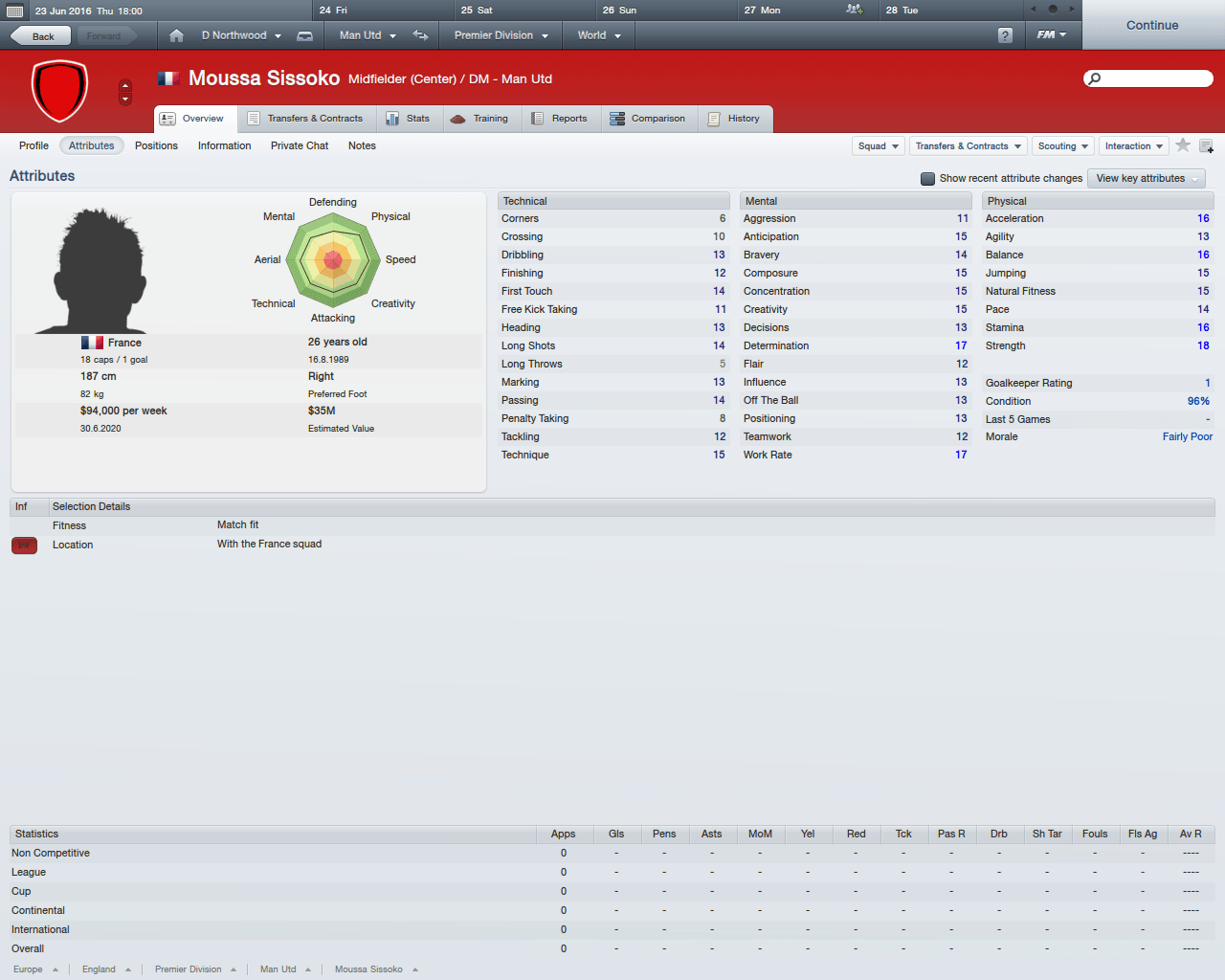 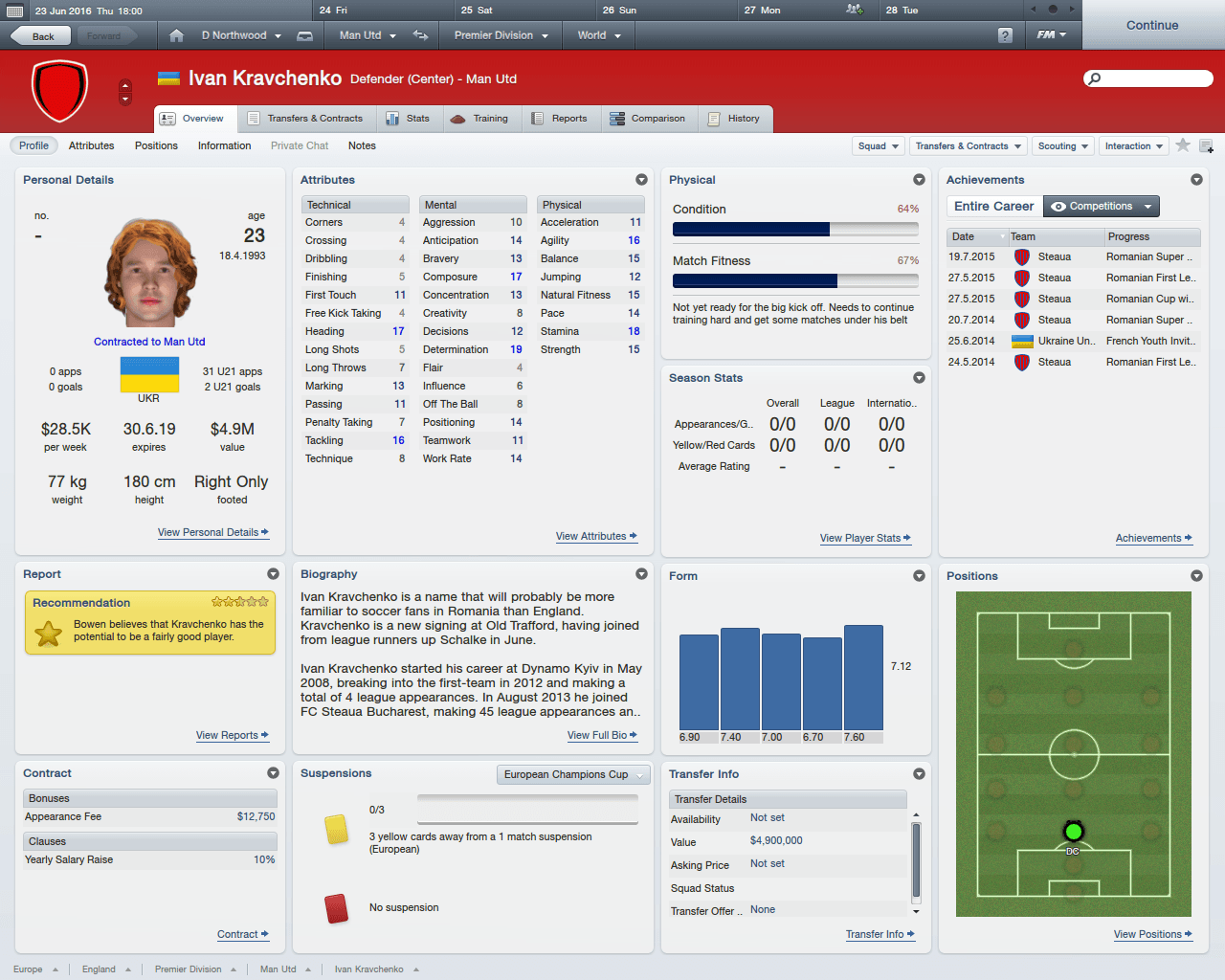 Besides them, a small number of players have left the club. Darren Fletcher leaves for Valencia, Tom Cleverly leaves for West Ham and Sebastien Bassong for Stoke City.

Quoted earlier by the media :
"Indeed, I have spent a fair enough of money, but its been done to strenghten the club. We lacked talent in the center point of the midfield, along with the right side of the defence. I can agree I would've made decent signings for a smaller ammount of money, but for a club of Man UTD's stature, we need only the best"
Login to Quote

crisrko
8 years
Pre-season comes to an ending! Manchester United have performed decent during the pre-season, and the new signings and Darral's tactics seem to fit well the club. Next stop is Wembley stadium, where Man City awaits them in a clash for the community shield. 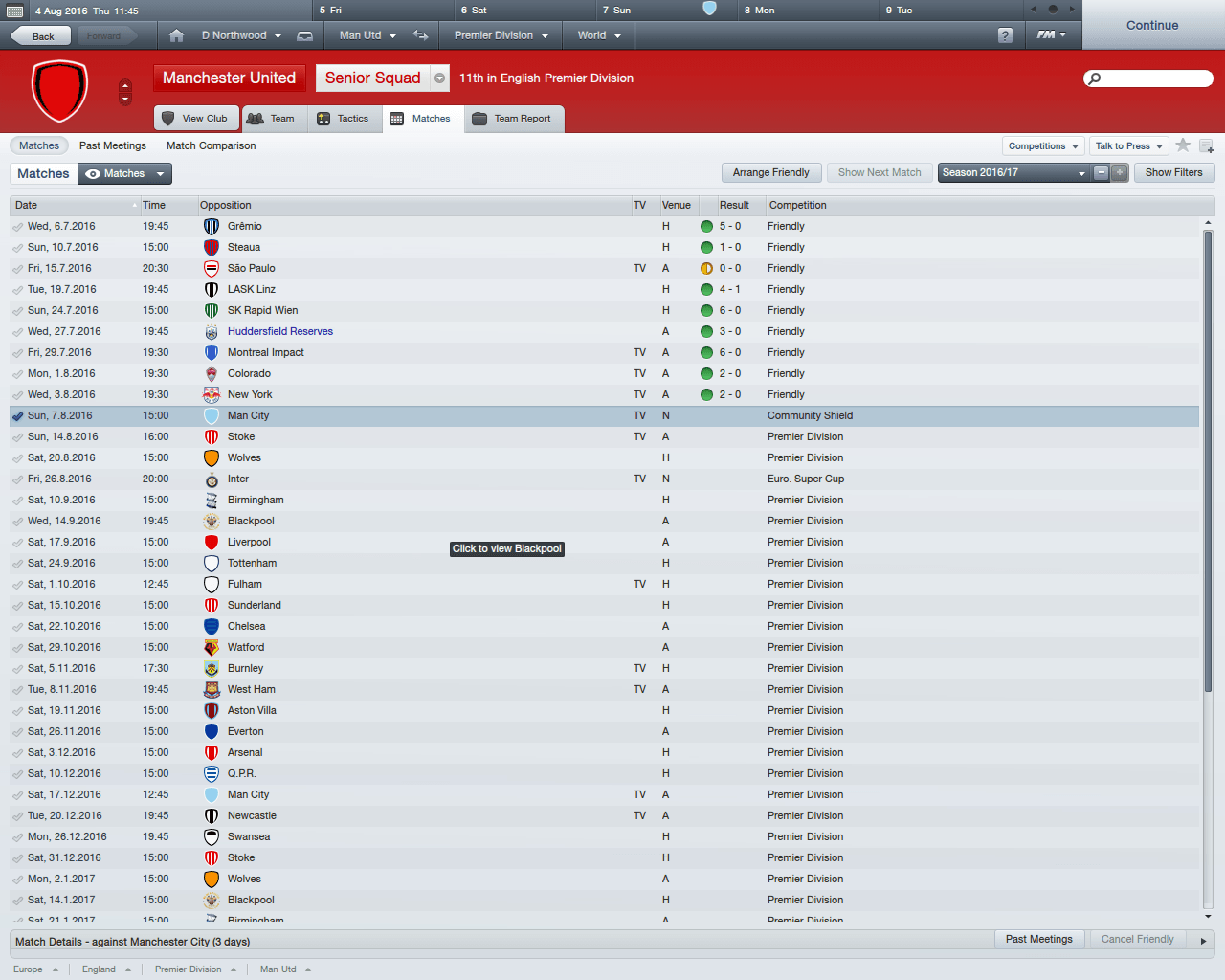 Regarding the matches, the team seemed very strong, but not too incisive infront of the net, probably didn't get used to the tactic? In the end they started playing well. The match against Steaua left me surprised, as we won in the 92nd minute from a header coming from Hazard. Steaua performed exceptionally, but they hand upfront a youngster and Bogdan Stancu ( both signings made by me ), without Wallyson and Tanase. As much as I'd try to deny it, I think that if Wallyson and Tanase were up there, I'd get my ass kicked. I'm glad to see my signings paying off, talking about my Steaua legacy. 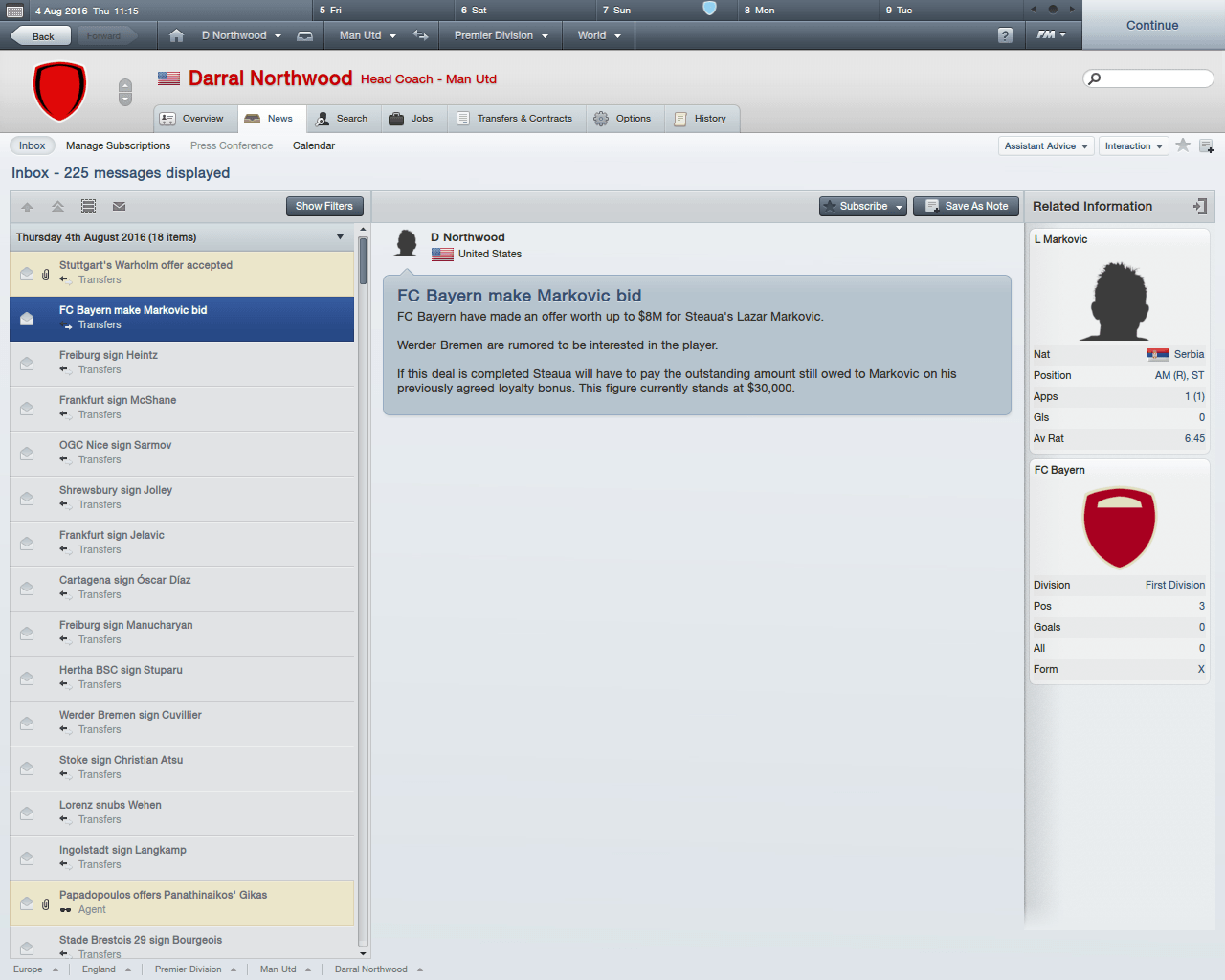 Finally, this is my squad, I received some players on loan, two defenders, and Pogba, Carrick and Vilhaena returned from their loans back in July. 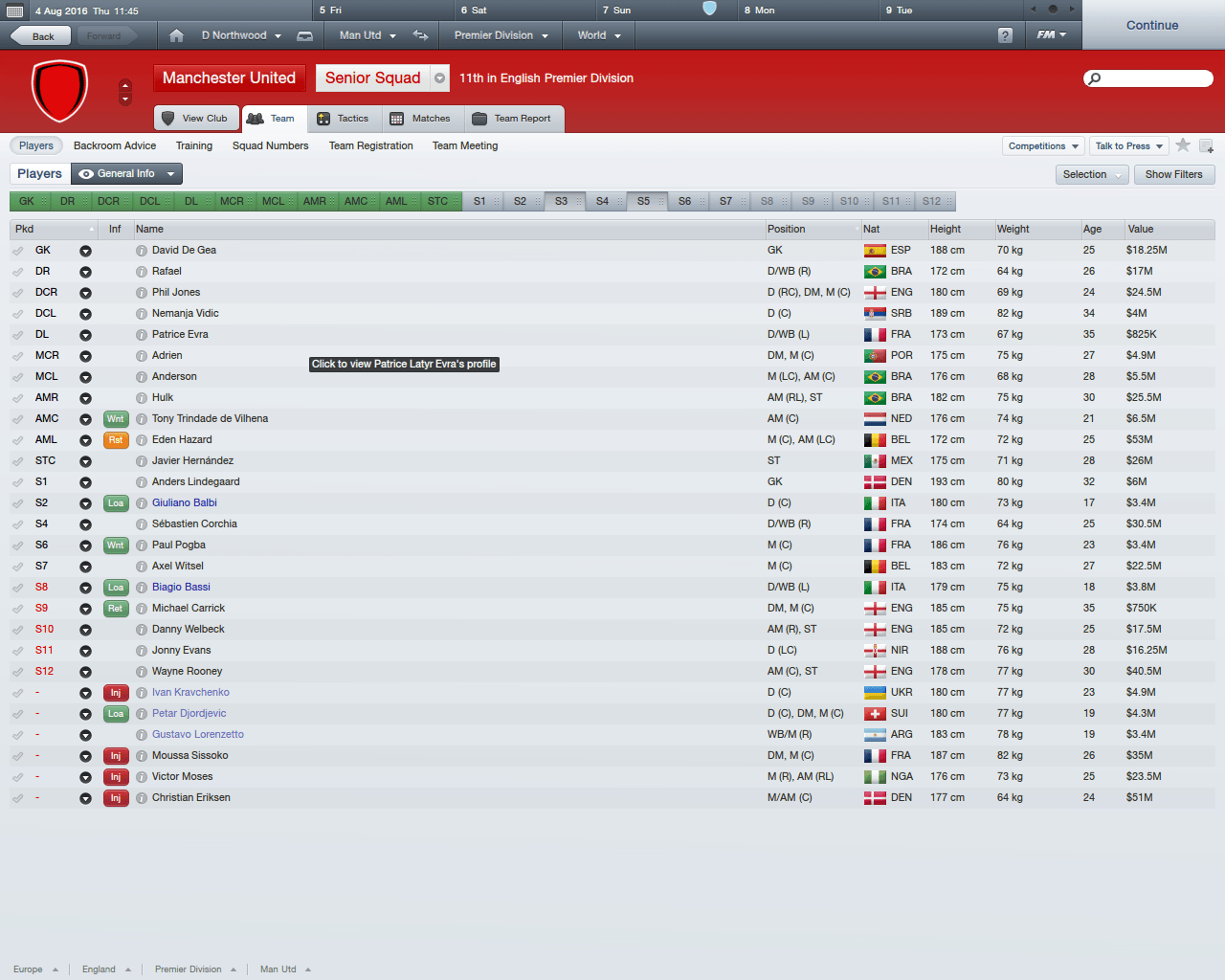 The media was roaming around the Man United facilities, looking towards interviewing Darral, once again. The spotlights are on the young manager due to his results. "Mr Northwood, one reported from Sky Sports approached him, What do you think about this new season? How will your team perform? The competition is stronger, with Mourinho departuring from Real Madrid to Man City. Are you afraid of the clash on Sunday? You shall face Mourinho for the third time, after his Real Madrid team beaten your Steaua team.
Northwood was reluctant in his speech : "I can't say I'm afraid of Mourinho. He had the advantage of Real's resources, a team he built with billions of dollars, while my Steaua signings went up to fifty million, -IN TOTAL-, over four seasons. Yet, I had achieved things he would never be able to with the resources I had. Sunday's clash will be nice, and we'll see how it goes. My team is raring to go."
Login to Quote

crisrko
8 years
Man United have done it! Darral Northwood wins the Community Shield on his debut as the Manchester United manager, also defeating the rivals Man City. What a match the team fielded.
This is the formation I used, it paid off. 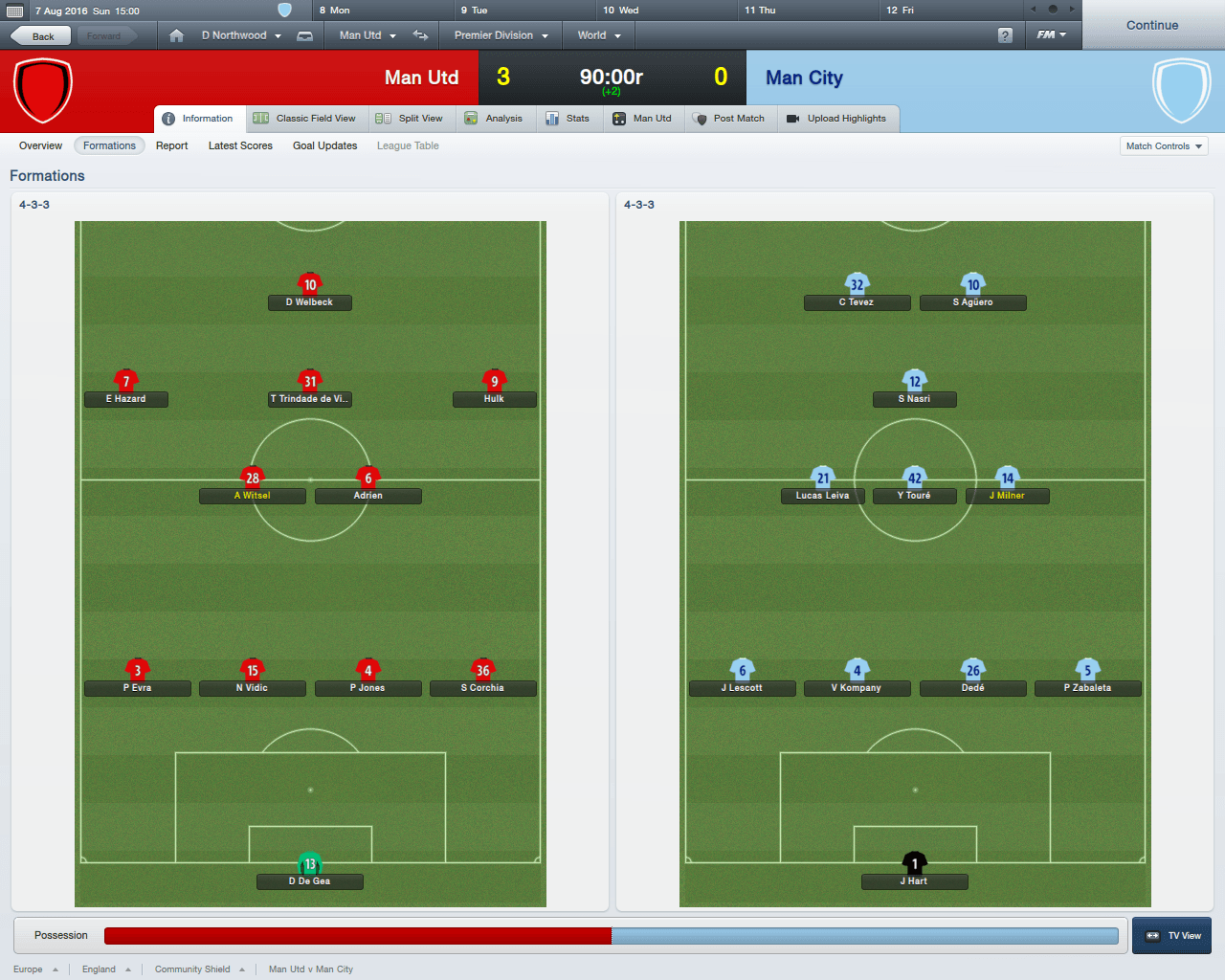 Goals were like this. Welbeck strikes for top corner, but Joe Hart blocks the ball, sending it to Vilhaena, who puts it inside for a debut goal.
Vidic scores from a slide-in at a set piece, more precisely, a corner. Welbeck completes the rout with a tap-in, as he outpaces Joe Hart, pushing the ball inside. 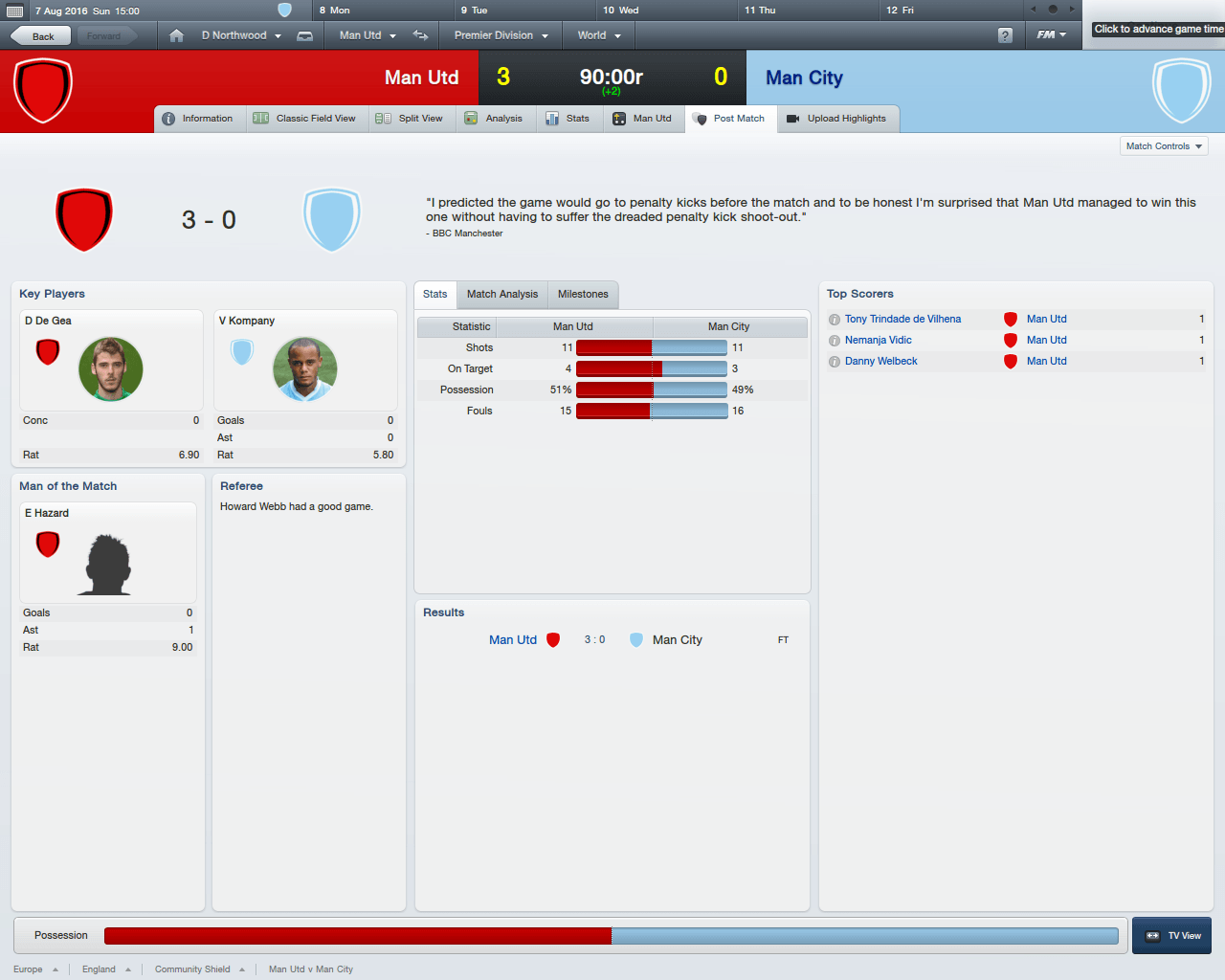 crisrko
8 years
Curently the progress has been great, we can be abit more incisive infront of goal in the league, but we're doing incredibly well in Europe. I have proven my replacement at Steaua is a goof ball, after saying I'm not suited to Man United, damn bastard. 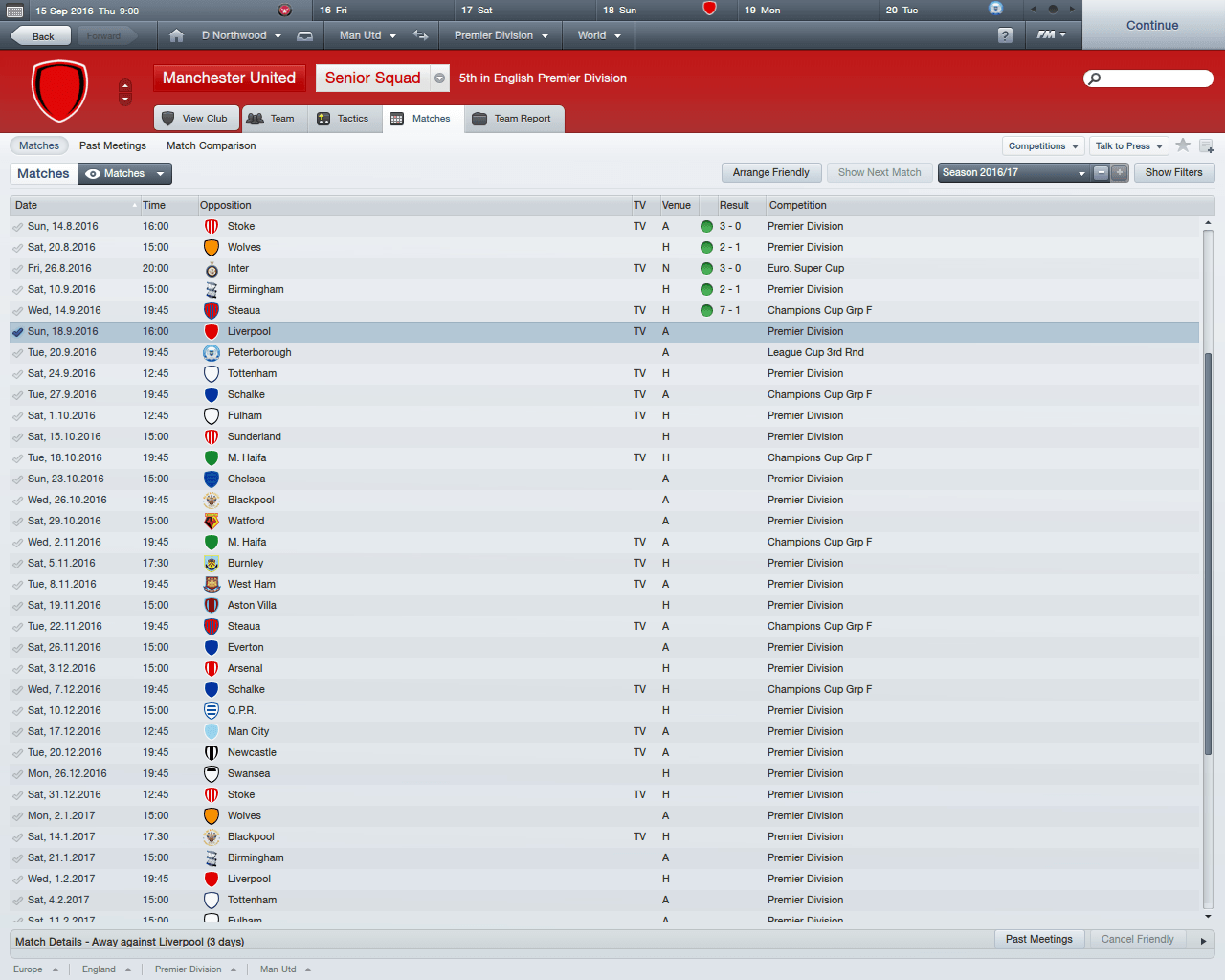 Rooney has four goals in the league, Hernandez is one poor bastard in a slump, and Welbeck is great, 9 goals in three matches in Europe. Hattrick against Inter, Five goals against Steaua and one more goal that I don't remember where from XD
Login to Quote

Akash
8 years
A perfect start to the season, but it won't last long. The AI always finds a way to get you down to loss against the worst possible team. Of course, I'm hoping that doesn't happen to you. 50 Million for Eriksen - he better not flop!
Login to Quote

crisrko
8 years
This morning, the media has once agained roamed around Manchester United's facilities, in look for the young manager, Darral Northwood. Northwood was calm this morning, seeming concentrated on who to pick for the next match.
Reporter : "Mr Northwood, your side faced defeat last night against Steaua Bucharest, your old club, how do you feel about this? Were the players affected?"
Northwood : "Well, what can I say. I always believed in the ability Steaua has always posed, especially in this sort of matches. Wallyson was the dangerman last night, and it really proved his incredible goalscoaring ability. We suffered defeat at his and Delph's hands. The players were affected like they always are when they loose. They were overconfident due to the great results, and that affected our game. Now if you excuse me, I have a team to pick up". And Northwood left the scene in a swift manner, leaving the reports shouting different questions to him. 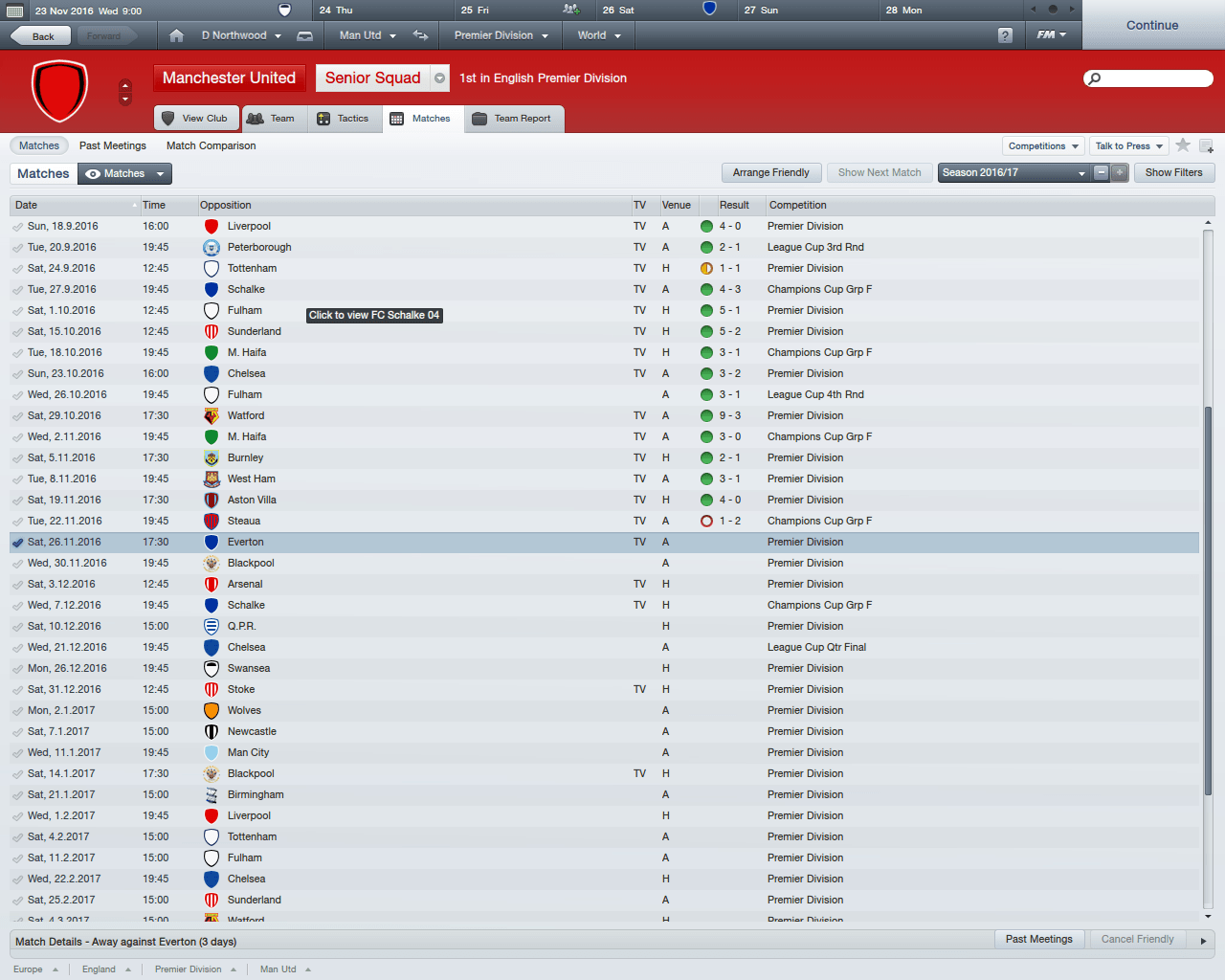 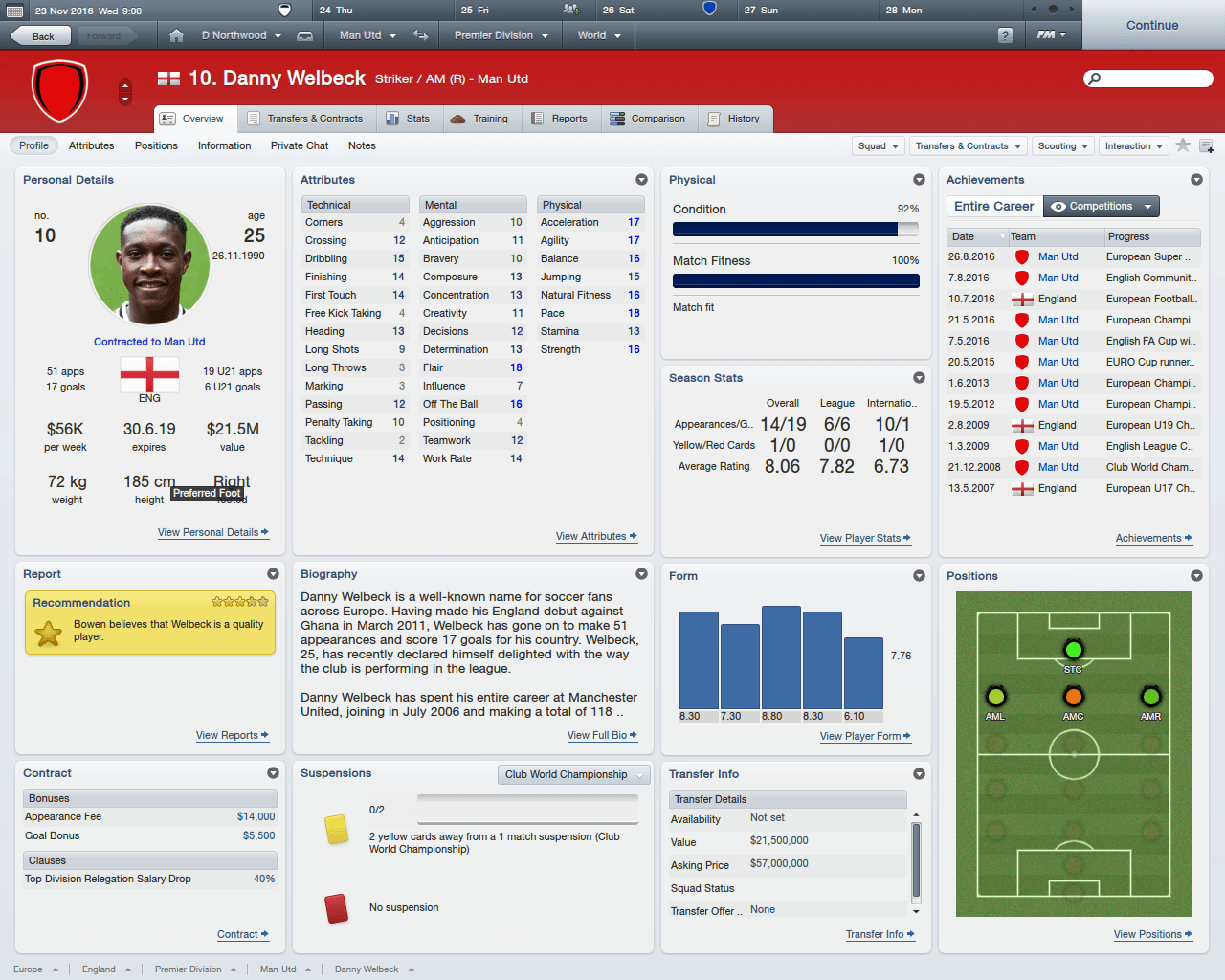 Hernandez will leave to Chelsea in January for 35 milion dollars. He was too poor to be ever considered in the first team role. Quality and scouting wise, he's good, but his performances...
Login to Quote

The FM Rookie
8 years
35 Million Dollars!! That isnt a bad deal. I wish you all the best with a team that I do not like so much. Well done in the community shield btw
Login to Quote