Kiwi
7 years
We start the new season against the team who we beat convincing 2-0 to take the title, Karvina.

Quite pleased about that.

Kiwi
7 years • Edited
I need to say that I am none to happy about my Board objectives, with the minimum requirement being Europe qualification (ie top three place finish).

Setting the bar as low as I can and see where it takes me.

I am also disappointed that the wage budget doesn't see an progressive increase either! 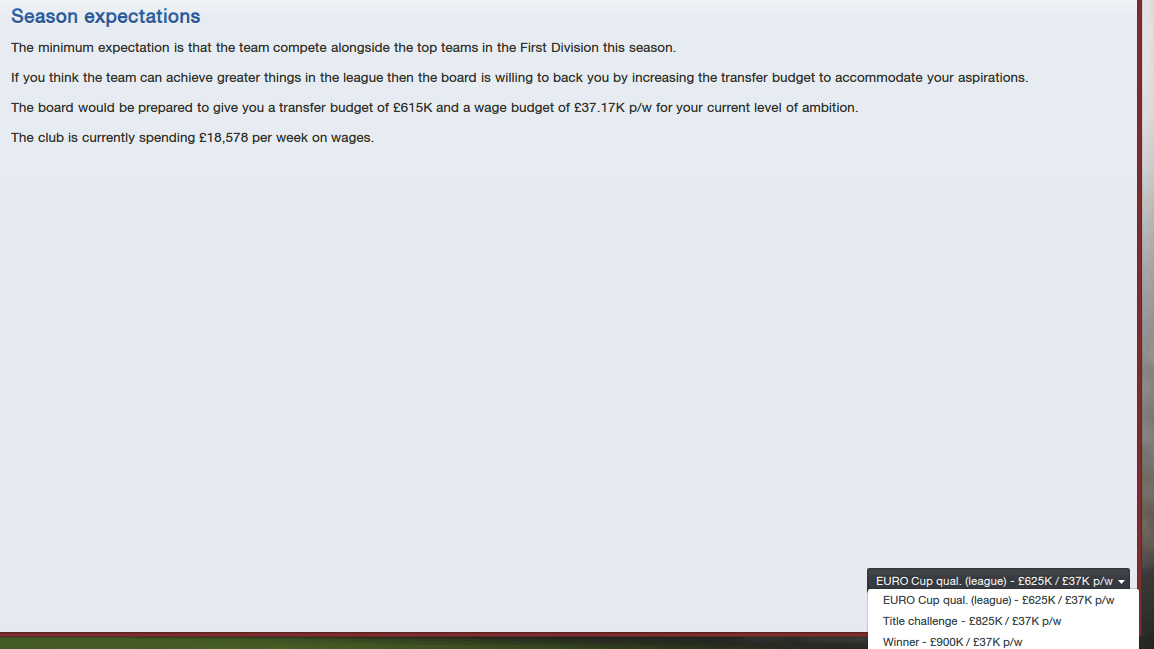 The FM Rookie
7 years
It will be a long, hard season. No doubt about that. However, you haave produces miracles before and I reckon there are plenty more cats in that mighty hat of yours

Kiwi
7 years
At the moment, I am feeling like the cat from Norway that got stuck in the doorway, rather that the Cat with the Hat from Green Eggs and Ham.

The beginning of the new season did increase the number of players who were willing to discuss terms - with most of them coming off contract. I've expressed interest in a couple of them, scouted thirty or so, and we'll see what comes of it.

I'm looking to make an approach for a Brazilian Portuguese utility who has great captaincy potential as my other target had the stones to choose Wigan over us......

As is my want, I have started peeling off the rubbishy "deadwood" players, and have secured the services of thirteen (!!) younger, cheaper players who I believe will have talent to burn. Best of all, these players were available on frees.

The Portuguese utility has come to his senses after initial discussions were not anywhere near close, and he will arrive in Dec. I'm still short of talent in the midfield and right defender areas, so am looking to plug those gaps.

The club made profit last year, but that was only due to the selling off of players, so I will need to find a way of making rain this season.

One feature I do like about the new FM is that when you are offered a new contract, you can elect the least expensive option. So I have signed a new three year deal, on GBP375 per week.
Login to Quote

FOSEBALL
7 years
Even if the club is poor I always go for the most expensive as it affects your rankings.
Login to Quote

Kiwi
7 years
Thanks Foseball, I must admit that is not an aspect I had considered. I am (at the moment anyway) focusing on getting the club back onto a firm financial footing. I'm hoping that my success in the league last term will allow us to increase ticket prices and sales, but we haven't had any season ticket updates as yet.

Kiwi
7 years
Brazilian Hudson is off to Bohemians 1905 for GBP425K. He is looking forward to the cosmopolitan lifestyle in keeping with his image.

I have no idea what that even means, but I am grateful because I can bank 425K.
Login to Quote

Kiwi
7 years
As the deadwood leaves, my Director of Football has been entrusted with two transfer targets which I couldn't make headway with. He is currently nought from two as one rejected our contract offer and the second target we couldn't agree on a value with his club.

I'm quietly glad that the first target failed, as we offered over the odds by way of transfer fee.

I may then need to rethink the DoF position!
Login to Quote

Kiwi
7 years
Another one of my English defensive targets has signed a two year contract extension with his current club.

Kiwi
7 years
My Ass Man is waxing lyrical about the improvements that Medina has made in the last little while.
Login to Quote

We are the home team, so it would be fair to say I am feeling pretty confident.
Login to Quote

Kiwi
7 years
My DoF is now one from three as we have moved to shore up our midfield and have secured another promising youngster.

The backroom boys thought it would be prudent if I praised two of my young transfer targets. The Irish utility is willing to come, it is just a question of how much do we need pay and his club Cliftonville are unrealistic in their demands, as they have knocked back a GBP200K offer from us. Phelan, for his part, did say that he had to take notice when I offer my opinion. Pity he is under contract until 2018!

My other target, was less interested. Norwegian midfielder Gorm, did react positively, but it did seem he was reluctant to comment, but he did appreciate the comments. Again, he is contracted through until the end of 2017!
Login to Quote

Kiwi
7 years
We have taken huge steps forward with out reputation! Norwegian striker Ygnve Sørum has agreed terms (in principle anyway) after spurning our advances earlier.

He has been available on a free for over seven months!
Login to Quote

Next year, depending on how the youngsters blend in and learn the language, there will be a change.
Login to Quote