Donatt
9 years
Great to see that you signed an albanian

p.s you're doing an awesome job ,keep it up !
Login to Quote

p.s you're doing an awesome job ,keep it up !


I was wondering when you'd resurface to comment on it! Thanks btw

Pirlo: The End Of An Era 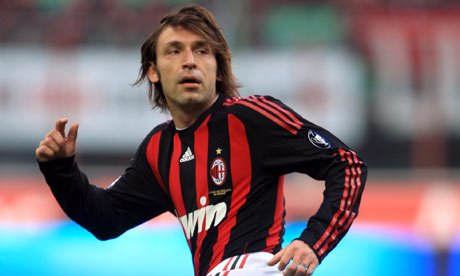 Fans are mourning the end of an era for Italian football, after midfielder Andrea Pirlo announced his retirement from professional football at the age of 35. The midfielder is a true legend of the game, having played for the three biggest teams in the Italian game.

Pirlo started his career off at Brescia, back in 1992, where he made his name and secured a move to giants Internazionale, from the capital Milan for £5.5m in 1998. He failed in the black and blue of the Nerazzurri, making just 22 appearances in three years at the Giuseppe Meazza. He also had loan spells at Reggina and former club Brescia. He may have failed at Inter, but it was at his next club where he really shone.

After failing at Inter, Pirlo made the shock move across Milan to big rivals AC Milan for £10.75m in 2001, where he stayed for ten years, and making over 280 appearances for the Rossonneri and winning several trophies. He was part of two Serie A wins and two UEFA Champions League, as well as being on the receiving end of Liverpool's famous comeback in Istanbul in 2005, where Milan were leading by three goals at half time, before throwing it away in the second half, and losing the final on penalties. He left Milan at the end of the 2010-11 season, and joining Milan's rivals Juventus on a free transfer.

He stayed in Turin for the final three years of his career, making 54 appearances in the last three seasons. He only made six last season, in Juventus' title-winning campaign, and has decided that it is time to call time on his wonderful career.

He has spoken of his desire to remain in football, favorably as an assistant manager. Rumours in Italy say that former club AC Milan want to appoint him as an assistant to their youth team manager. Whether these rumours have any substance to them remains to be seen, however Matthaus has set about revamping his backroom staff at the San Siro, including signing Sporting Lisbon legend Liedson as a coach. It is clear Pirlo would be valued as part of this backroom team in Milan.
Login to Quote

BeanyUnited
9 years
Noooo not Pirlo whos beard will we be able to admire now!
Login to Quote

Jamesg237
9 years
When Pirlo retires in real life it will be a sad day for Italian football as he is just pure class and a legend of that nation. You have managed to give him a good send off here Blue, well done!
Login to Quote

Not Pirlo.
Login to Quote

Blue
9 years
I know guys, he's a legend, but get over it

Arvind
9 years
Apparently he's going to go spend time in his winery after he's retired. They produce 4 types of wines there or something. No idea why I know this.
Login to Quote

Matthaus: "We Will Win The Title"

Lothar Matthaus has enhanced his reputation as a manager who boldly states his intentions by claiming that his AC Milan team will win the Serie A title this season, despite pre-season not even having finished yet.

The German was speaking in a press conference ahead of their friendly away to Olympique Lyon, and got asked what he thought his team's chances were for this coming season. He replied "I know this will seem bold or whatever, but I think we will win the title this year, without a doubt. Juventus won it massively last year, but I wasn't here for long enough. We've started making improvements to the squad already, and we're going to continue to until the window shuts next month. The players we've signed already, and the money we've got from selling players so far reassures me we've made the right decisions to reach mine and the club's priority of winning the Serie A once again."

Lothar Matthaus' side are predicted to finish as runners-up to Juventus once again, but the side from the San Siro are determined to prove that they are once again bigger than the Bianconeri.
Login to Quote


Based on the players I've signed (which you'll see later), and the form against big teams last season, I think we'll be fine. If I'd joined Milan a couple of months earlier, I think I'd have won the title then too.
Login to Quote

mike22122
9 years
nice blue, any under rated players on the right you tried on this?
1
Login to Quote