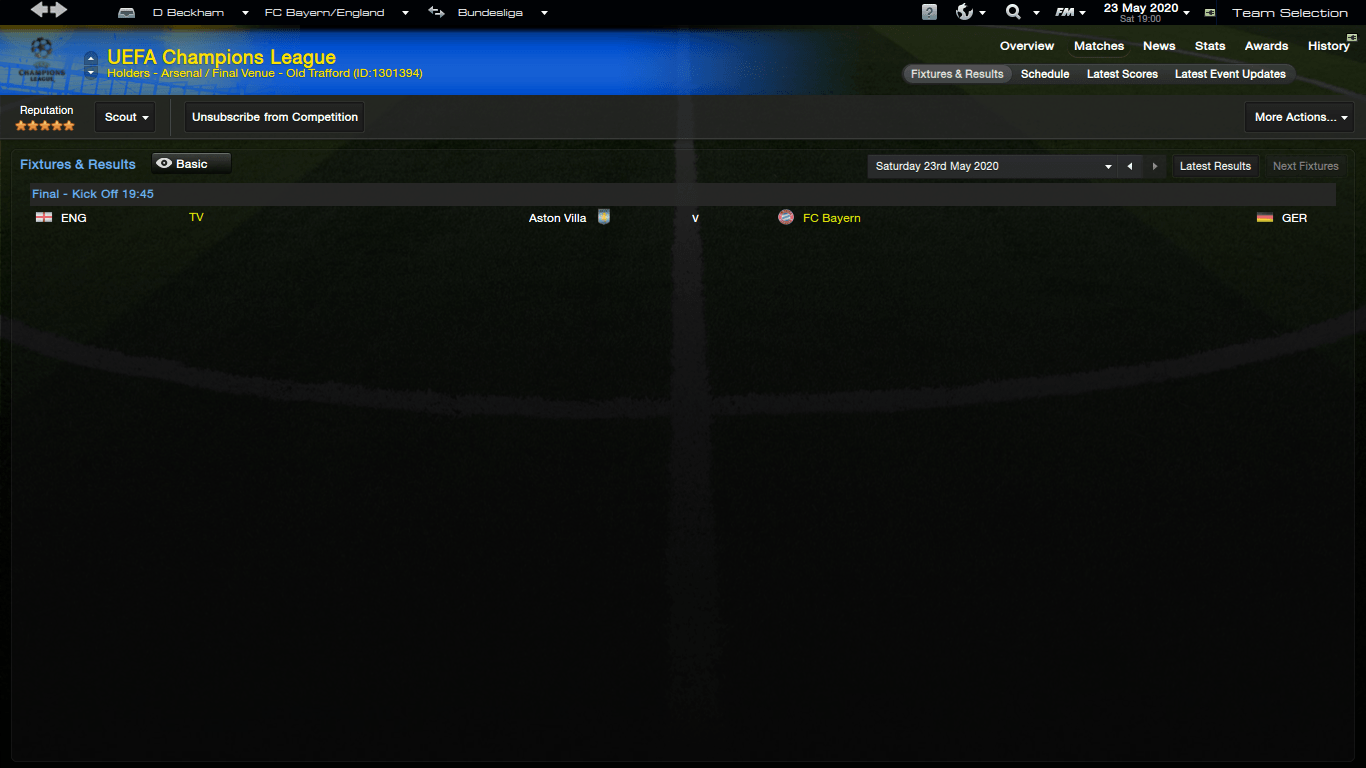 Krupesh Shah: Hello, and welcome to the Champions League Final. I'm here at Old Trafford today to cover the entire match - be sure to follow our live coverage here at Eurosport.

There he is now, walking around the pitch and applauding both sides' fans. Oh, here comes the team line-ups, let's take a look. 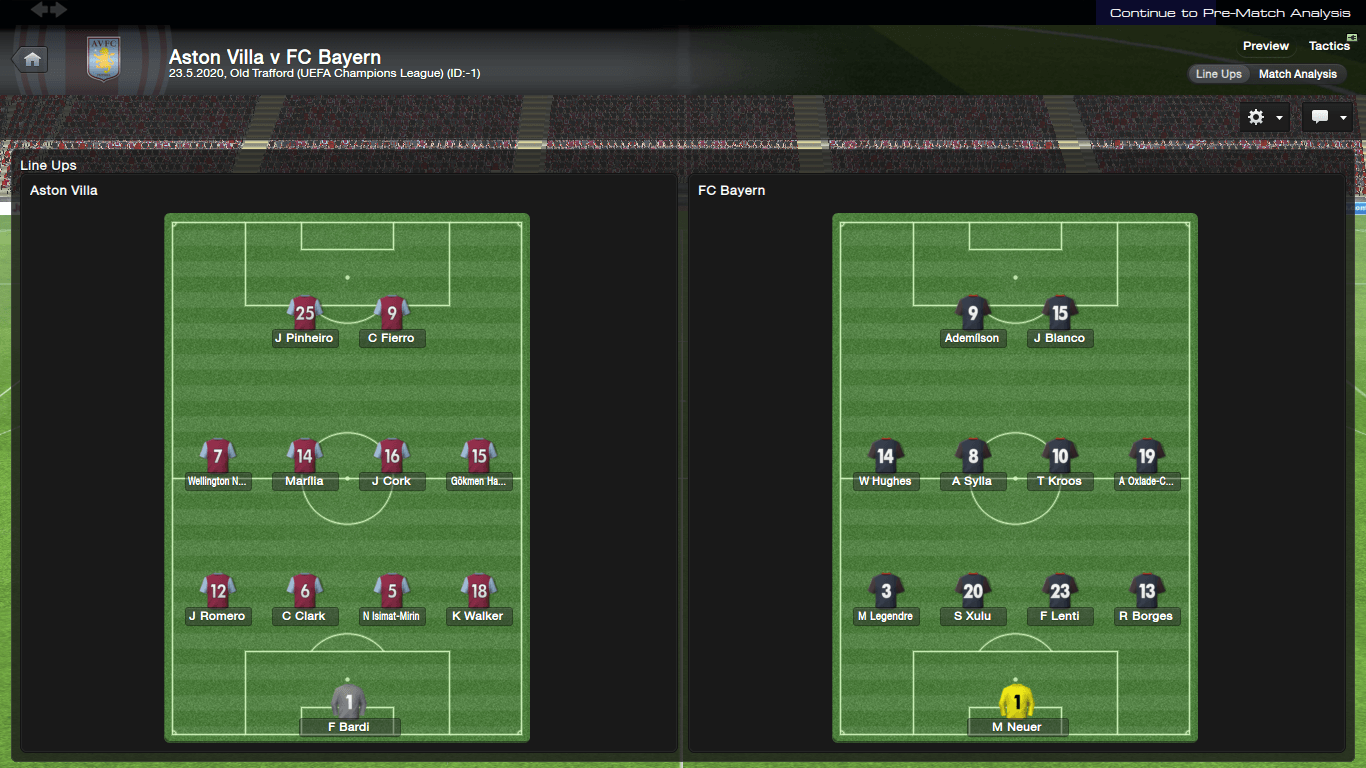 Let's take a look at the Bayern Munich line-up. Interestingly, four out of eleven in the Bayern Munich starting XI are Aston Villa old boys, and like Beckham, they will be facing their former club. Manuel Neuer in goal as usual, with Rodrigo Borges filling in for the injured Ryan Garland like he did in the DFB Pokal Final. Martin Legendre also starts at left-back, with Eneko Diez strangely relegated to the bench.

Legendre was brought in to Aston Villa in 2015, but never got his big break into the first team, but he certainly has at Bayern Munich, having made 45 appearances over 2 years.

Alex Oxlade-Chamberlain is on the wing for Bayern, with Will Hughes on the left - both formerly key players with Aston Villa. Abdoulaye Sylla and Toni Kroos mans the central midfield.

In the side of Aston Villa, there is another interesting fact - only 3 of their starting XI were brought in by Malky Mackay, the rest having been signings of Beckham when he was at Villa Park.

Francesco Bardi starts in goal for the Villans, and Kyle Walker will also be dealing with the speediness of his England teammate Will Hughes at right-back. Nicolas Isimat-Mirin will partner Ciaran Clark in defense today with the unfortunate absence of Daniel Montero through injury, and John Romero will be at left-back as usual.

Gokmen Hacieyupoglu has really shone since Chamberlain's departure and here he is now, on the right wing for Bayern Munich where he will come face to face with his former teammate Legendre. Wellington Nem is on the other side of the midfield while Jack Cork and Marilia will be in the center. Up front is Carlos Fierro and Jose Pinheiro, two strikers very capable of getting important goals.

Overall, a very strong squad fielded from both sides. Let's see what they can do now.

1' - We kick off here at Old Trafford, the Theatre of Dreams. Bayern Munich and Aston Villa will go head to head, their second time clashing in a Champions League Final since 1982, where Villa won their first European Cup. Bayern will be hoping things are different this time.

- Jose Pinheiro and Carlos Fierro combine, with Fierro lobbing it up for Pinheiro to get to it, and the Bolivian striker hits it past Manuel Neuer to give Aston Villa the lead!

- Will Hughes plays the one-two with Jesus Blanco and the Paraguayan international manages a strike which foils Bardi, superb play from both of the Aston Villa old boys. All square now.

- And Bayern Munich are quickly 2-1 up, thanks to the efforts of Ademilson this time. Martin Legendre crosses the ball - a beautiful cross, may I add - and Ademilson gets to it, striking it fiercely past Bardi.

31' - With Aston Villa's Marilia injured, Miguel Marques will come on to replace the defensive-minded midfielder.

32' - Wellington Nem crosses it for Carlos Fierro, and it almost seems like the Mexican will head it into the net, but Manuel Neuer rushes out, grabbing the ball first, relieving the Bayern fans on edge and disappointing the anticipating Villa fans.

34' - Aston Villa try again, but once more, Wellington Nem's cross is stopped by Manuel Neuer, just before the ball can get to Carlos Fierro.

45' - Half-time here at Old Trafford, with Bayern Munich leading 2-1, with Aston Villa are trying relentlessly to even the score. As of now, Bayern are on course for their sixth Champions League title.

45' - And the players are back out the tunnel, with Aston Villa looking more determined than ever.

52' - Gokmen Hacieyupoglu's free kick finds Wellington Nem but he is unable to do anything as Martin Legendre dispossesses him with a perfect tackle.

54' - Wellington Nem hits a free kick, a fantastic one, into the box, but Ademilson gets his head to it, knocking it clear before anyone else can.

55' - With Aston Villa having been attacking with vigour, it is Bayern's turn to respond, with Will Hughes darting past defenders with ease to finally finish his moves with a shot at goal, but Francesco Bardi blocks the shot!

62' - Abdoulaye Sylla is back on the Bayern Munich bench, with Thiago Alcantara coming on.

- WHAT A FINISH! Jesus Blanco gets the ball, and left unmarked, has no trouble running down the pitch to the Aston Villa net, where he eventually lobs the ball superbly over Francesco Bardi! Holy moly! What a shot! His second goal of the game! Magical stuff from the former Villa man!

74' - Carlos Fierro is in a dangerous position and intends to strike it, but Siyanda Xulu is there just in time, dispossessing him.

85' - Aston Villa make a change with Wellington Nem coming off for Martin Olsson.

90' - AND THAT'S IT! Bayern Munich have won their sixth Champions League title! What a brilliant display from Beckham's boys, and what a disappointing result for Aston Villa! Great stuff here at Old Trafford! 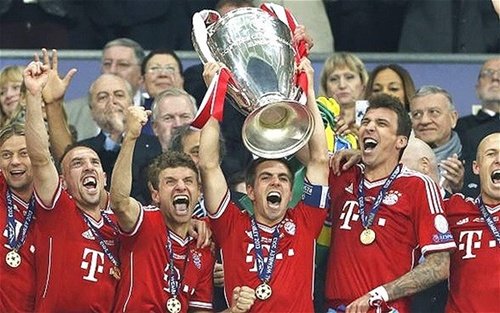 Krupesh Shah: Both the players and the fans of Bayern will be partying throughout the night! Their sixth Champions League! Amazing!

David Beckham is also a great manager, there he is now comforting the Villa players instead of partying with his team - what a man.

Alright, that's it from me for tonight. I'm Krupesh Shah, reporting for Eurosport. Good night.

The New Kings of Europe 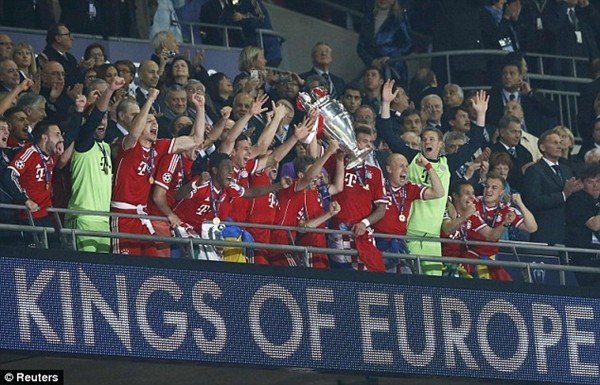 Deleted
7 years
Oh it had to be didn't it? Congrats man! I bet Krupesh paid you big bucks to commentate the big final.
1
Login to Quote

k1rups
7 years
What a great update! Even though I commentated alone it certainly didn't feel like it with the noise from the Bayern fans

Glenn T
7 years
Paddy: He did!

Louis: Mr Hasan is just taking a break and he will be back to commentate on another cup final sometime soon due to popular demand.

Hahahaha. Glad you enjoyed it.
Login to Quote 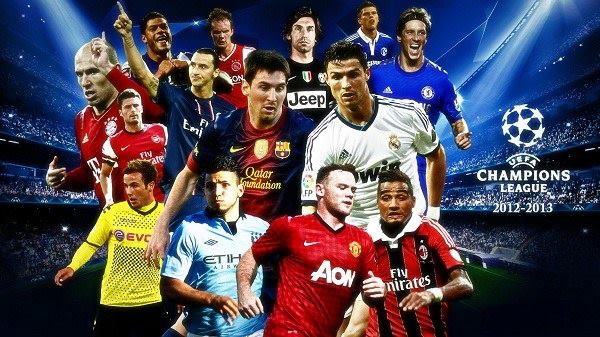 The Brazilian international managed to score 13 goals in 13 appearances in the Champions League and also grabbed 3 assists. 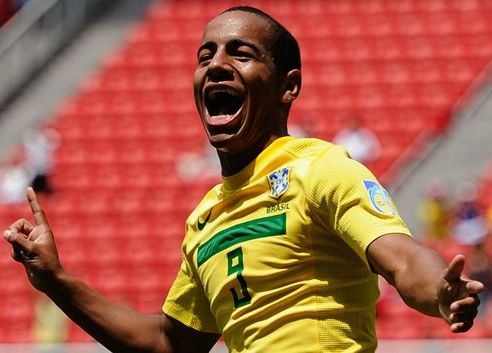 Ademilson joins a list of star names to have won the award, like last year's winner Jack Wilshere and other great players like his fellow teammate Toni Kroos and Barcelona forward Lionel Messi.

The 26-year-old, who is also tipped to win the Best Player in Europe, has expressed his delight at winning the award.

"I'm very happy to win this," Ademilson said, beaming and speaking to assembled German journalists. "It's proof of what I've managed to achieve this season. My teammates helped me a lot as well and I dedicate this award to every single one of them, and also my manager, David Beckham." 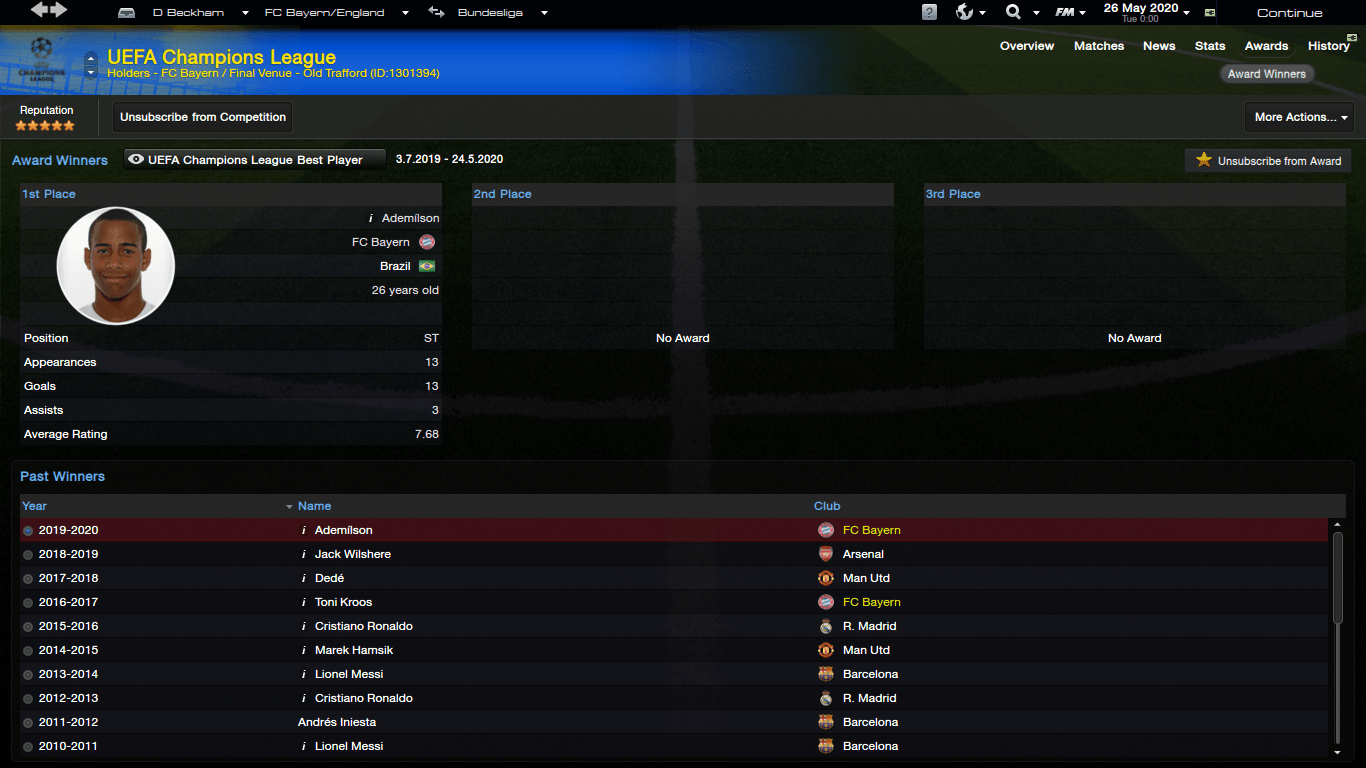 He was also 2nd-placed for the Champions League Golden Boot, losing out only to Aston Villa's Carlos Fierro, who scored 15 goals, 2 more than him.

The former Sao Paulo player was also named in the Champions League Dream Team along with teammate Eneko Diez.
Login to Quote 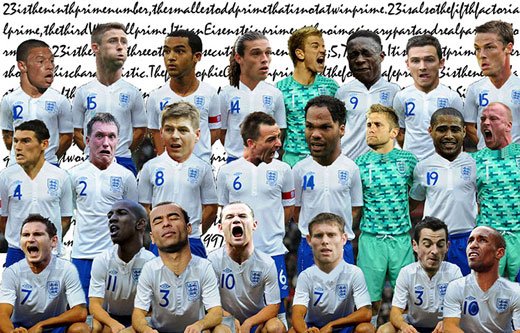 The 28-year-old has 21 England caps to his name but his impressive season for the Reds in the Premier League, where he made 33 appearances, has failed to win him a place in the national team. Instead, Fedele Lenti of Bayern Munich and Martin Kelly will back up first-choice central pairing Phil Jones and Ryan Shawcross. 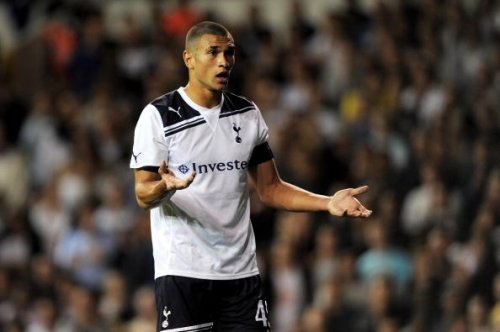 Blackburn winger Jack Grealish and Chelsea defensive midfielder Tom Huddlestone have also failed to make the final cut. This could spell the end of Huddlestone's England career, with the Blues midfielder already being 33.

Grealish, however, still has plenty of time to show Beckham he has a place in the nation's footballing team, but despite being at the young age of 24, could find this a difficult task. Since returning to England and signing for Blackburn in January, Grealish has looked nothing like the player that turned out regularly for Bayern Munich.


Southampton pair Ritchie Rix and Ron Poole have also failed to make the final cut, but both youngsters will be delighted they managed to make the preliminary squad at all. Both have zero caps for England, and although excluded from Euro 2020, will definitely have chances to prove their worth on international level soon.

Instead, Beckham has gone for experience, calling up the likes of Wayne Rooney and Leighton Baines for the final squad despite their obvious drop in quality throughout the season, with age finally catching up to them.

Veterans like Baines, Rooney and Joe Hart have no doubt in their minds that this could be their last major tournament on international level, being 35, 34 and 33 respectively, and all three will want to go out on a high.

Hart will be 35 years old when England contest the 2022 World Cup in Qatar, although if all goes well the Manchester City stopper will still have a chance of being first-choice keeper for the Three Lions at the world tournament.

Okikos
7 years
Seems like a strong squad. Good luck at the EUROs

ME NO HAPPY GLENN!!!
Login to Quote

Neal
7 years
I can't believe I was sacked :'(
Login to Quote

Rab: Rix will have his chance in the World Cup

Neal: As I said, you're not sacked