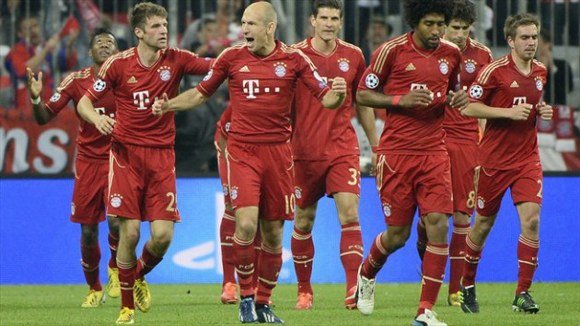 Bayern Munich and David Beckham have made history with the club being the first squad of players in 57 years of the Bundesliga to complete the season with zero losses. The German league have gotten their very first Invincibles team.

Die Bayern won 30 games and drew 4 in 34 league games - their status as an Invincibles club being confirmed after they played their last league game of the season, a 5-0 win against Aachen.

As Bayern Munich players celebrated their title win at the end of the match, Beckham took the time to speak to the press on the pitch of the Allianz Arena.

"I think we can now proudly say that we are the best team in the world currently," said Beckham. "Only two clubs in Europe have made it through a season without a loss, and now we're right up there with them.

"If people still don't believe that we're the best club in the world, we are going to prove it soon by winning the Champions League.

"Some people say Barcelona and such, but no. They will get their chance to be the best club once they've won the quadruple, the Champions League, and finish a season unbeaten."

These are bold words from the former Aston Villa manager, with his Bayern side still having yet to contest the DFB Pokal Final and the Champions League Final. However, it appears the Englishman is confident of his side's chances. 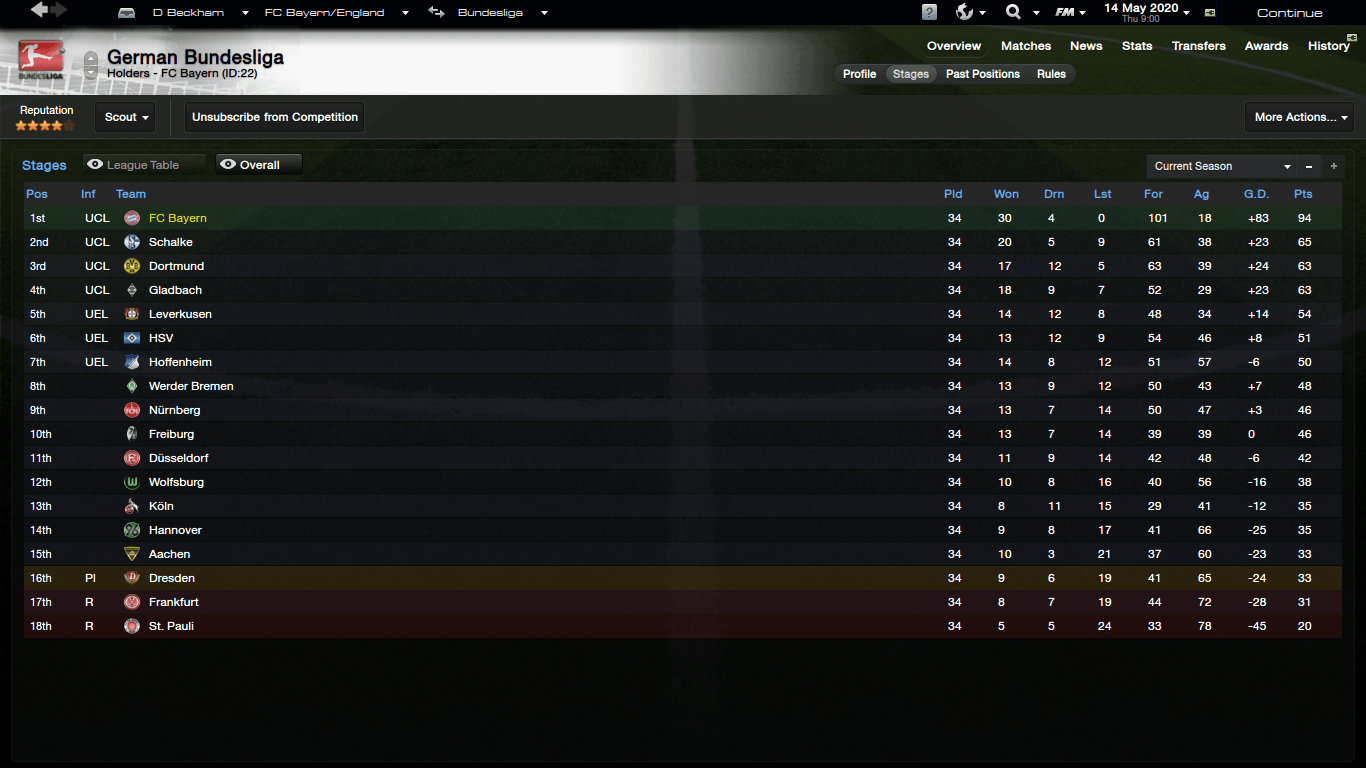 Toni Kroos also managed to live the dream of a Bayern Munich supporter as he lifted the league title as captain of the club for the first time.

The 30-year-old's season has been hampered by injury and fitness issues and Kroos only made 24 league appearances throughout the campaign. However, he still managed to contribute 3 goals and 11 assists.

"I've always dreamt of lifting the league title with Bayern Munich as their captain. Now I'm essentially living the dream. It's great," said Kroos. "But we can't rest now because there's still two other Finals coming up and we want to complete our fantastic season with a quadruple. We have a very real chance of winning both the DFB Pokal and the Champions League." 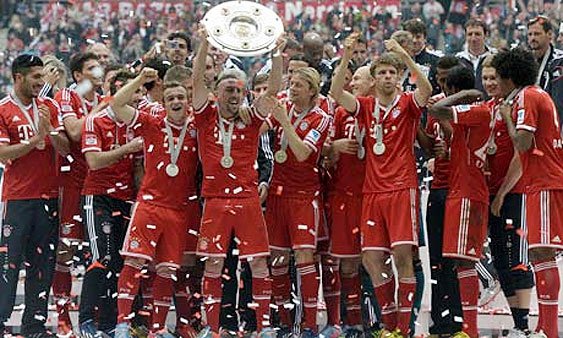 Deleted
7 years
Congrats! Being Invincible is one hell of an achievement no matter who you are. Hope you pack the Champions League away too. In my eyes, if you lose to Villa, all that hard work you done there isn't yours anymore

2013-06-15 16:51#112433 KingPadster : Congrats! Being Invincible is one hell of an achievement no matter who you are. Hope you pack the Champions League away too. In my eyes, if you lose to Villa, all that hard work you done there isn't yours anymore

Jamesg237
7 years
A wonderful achievement that you definitely deserve! Always the possibility of doing it a second time in a row!
Login to Quote

Glenn T
7 years
I have tried to do the next update but I have accidentally deleted all of my work TWICE when I was nearly done with it. The first time, the page fucking refreshed on it's own. The second time, I don't know why but the fucking Google Chrome window fucking closed.

Do not fret for the update will still come out, but for now I need some place to vent the intense anger I am feeling.

Thanks! Ignore that, the update will come out soon enough because I am feeling better now.
Login to Quote

Paddy: Exactly! What the fuck is wrong with my fingers 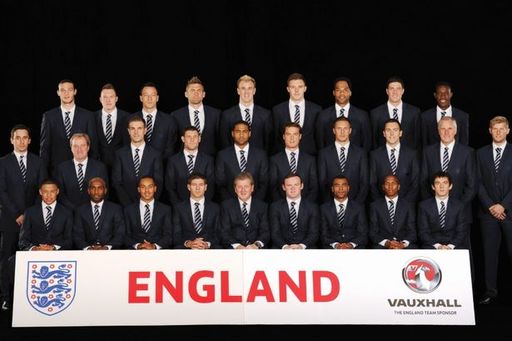 England manager David Beckham has named his 30-man preliminary squad for the European Championships taking place in Turkey this summer.

Euro 2020 will be the 16th European Championship tournament and England will be looking to build on their success in Euro 2016 - where they were only beaten to the Euro trophy by Spain in the Final.

A successful Euro 2020 will cap off a great year for the Three Lions where they jumped from 9th to 3rd in the FIFA World Rankings.

Bayern Munich's Leighton Baines has been one of the surprise inclusions to the preliminary squad. The England veteran, who has 97 international caps to his name, made only 13 league appearances for Die Bayern this season, and although age has caught up to the 35-year-old, it seems Beckham still has enough faith in the former Manchester United left-back for one more major tournament. 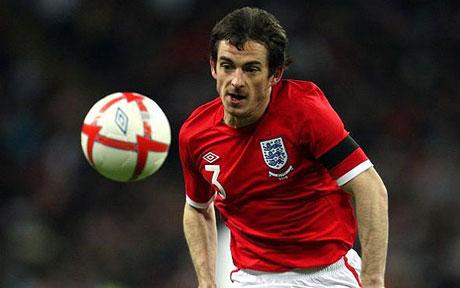 There are various other unusual names included in the squad, including Blackburn winger Jack Grealish and Chelsea midfielder Tom Huddlestone.

His blistering form around the end of the season appears to have failed to revive his faltering England career, with Jack Cork not even making the preliminary squad. The former Southampton captain was a vital squad member when England won the World Cup in 2014, but has seen his international career fall to pieces following poor form and non-importance at Aston Villa - having not been called up to a single Three Lions team since 2018, a year after he joined Villa.

England captain Wayne Rooney has also managed to be called up, even though he made only 4 appearances in the Premier League last term for Manchester United. This will almost certainly be the 34-year-old's last major tournament with England, and he will desperately be hoping he can end his tournament record with England on a high. 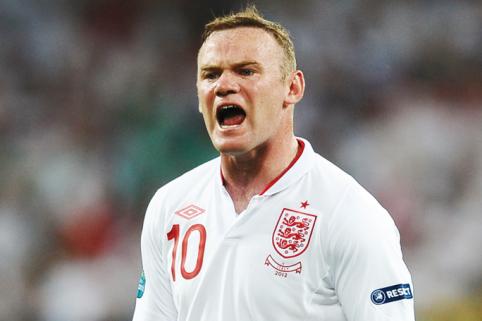 Beckham has also gone for youth with Southampton midfielder Ron Poole being called up instead. The 21-year-old is on loan at St. Mary's from Arsenal and has had a slightly above-average season, but prior to this, has no experience with the senior national team, despite being an established England Under-21 international.

Naturally, the zero-capped midfielder is seen as one of the favorites to be part of the unlucky seven cut out of the final 23-man squad. 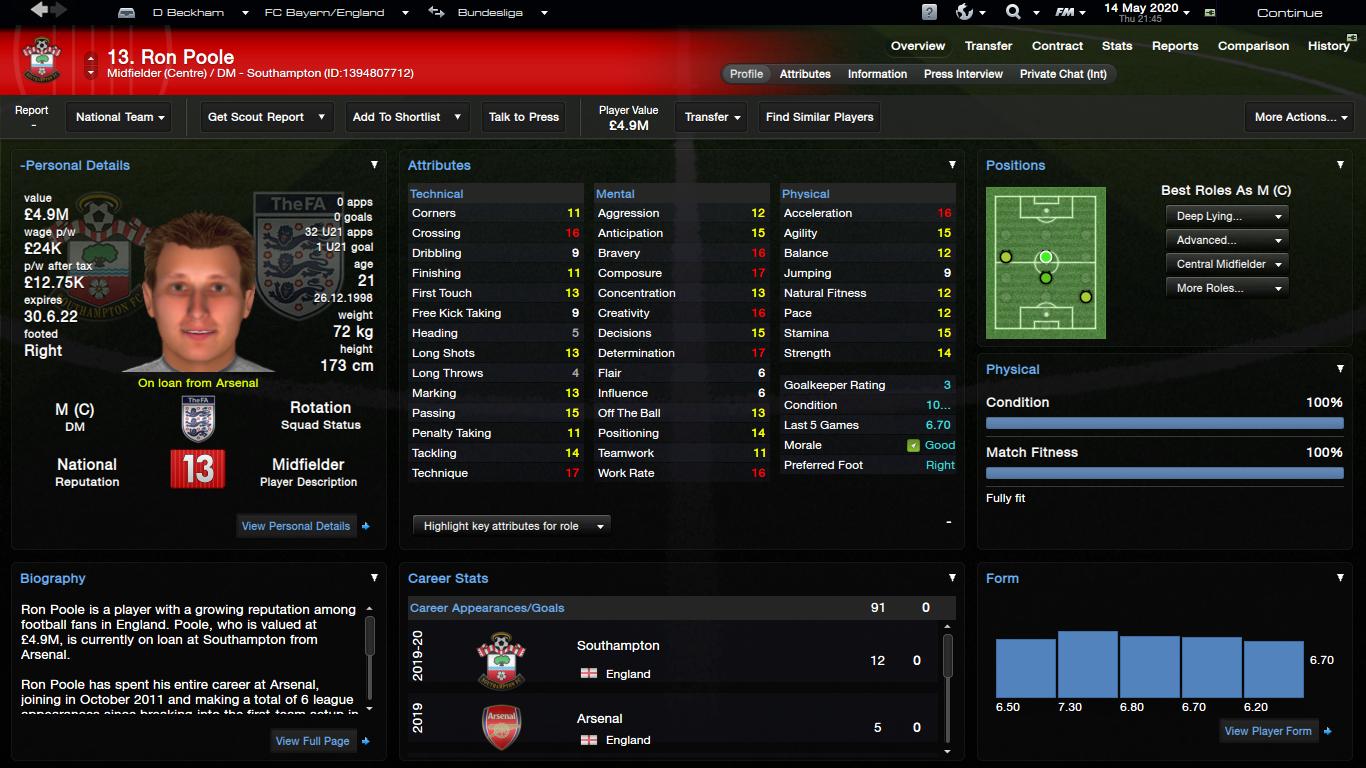 Poole is joined by Southampton teammate Ritchie Rix on the squad list.

Although seen as the future of England's left-back position, 23-year-old Rix has been constantly overlooked for the national team despite having been a fantastic player for England Under-21s, due to the presence of Kyle Naughton and Leighton Baines. But with Baines aging, Rix is ready to make his entrance into the England set-up.

Like Poole, Rix has no prior experience with England, but is seen as someone with more of a chance to make the final cut as Beckham's squad lacks much-needed youth and quality at left-back, something Rix can provide. 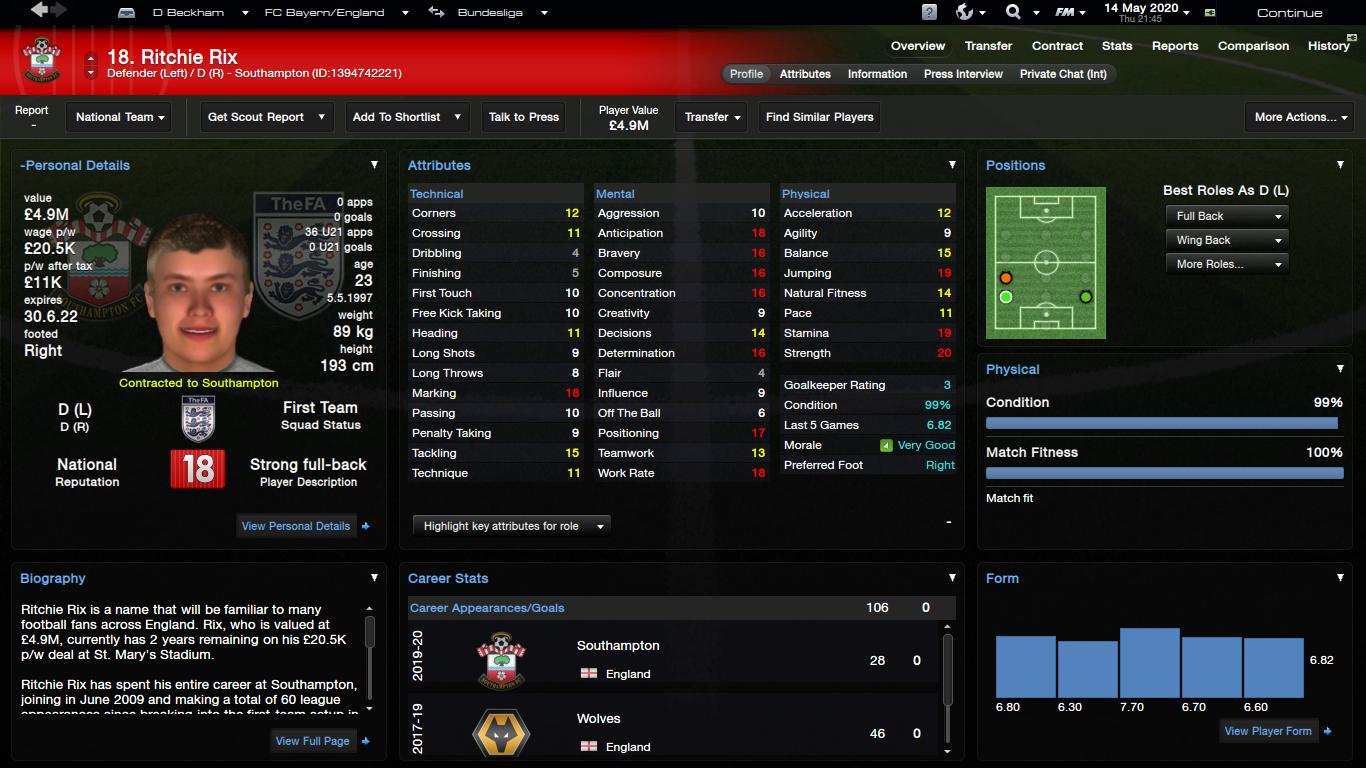 Louis O.
7 years
Mason Bennett should be higher than Stoke. Since he isn't, he is crap, so Y U PICK HIM MR.BECKHAM?

Actually, Stoke might be quite good on your save, so GOOD CHOICE IN PICKING MASON BENNETT, MR. BECKHAM!

Actually, Stoke might be quite good on your save, so GOOD CHOICE IN PICKING MASON BENNETT, MR. BECKHAM!

You should remember that this is the preliminary squad

Also, England don't have any quality strikers at all

Surprising about Baines
1
Login to Quote

Inq: I wanted him to have one last tournament. He's also a personal favorite of mine

Inq: I wanted him to have one last tournament. He's also a personal favorite of mine