Capital One Cup 2017: Road to Wembley

Aston Villa are back at Wembley for the Capital One Cup Final for the THIRD consecutive time, and they will look to defend their trophy last year against the Bluebirds - Cardiff City, who are going to be playing in only their second Capital One Cup Final in their 118-year-long history. How did Villa pave the way to Wembley again though? Let's find out.

Aston Villa entered the competition at the Third Round and their first opponents were Crewe Alexandra, who did not put up much of a fight. 17 shots later, the Lions scored 2 goals through young Irish striker Jim Lawless and Brazilian midfielder Mattheus. It was not an impressive performance, but a passable one at least. 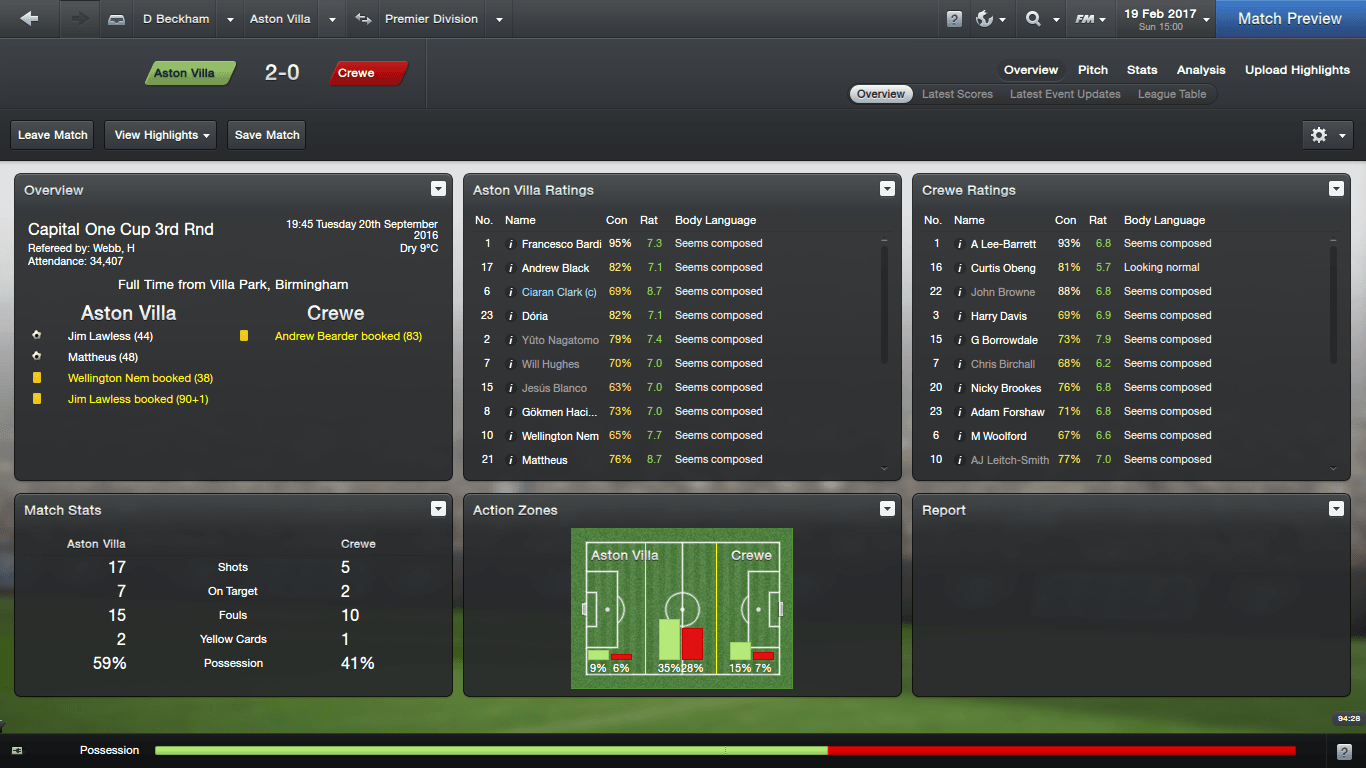 To their dismay, Villa were drawn with Premier League giants Manchester City for the Fourth Round, but went into the match with a winning mentality. They forced City into extra time with brilliant defensive displays, and it was up to Fabian Delph to score in the 113rd minute to prevent the match from going to penalties, as well as seeing his side advance to the Quarter Finals. A brilliant match and a fantastic showing from Villa. Villa came up against Stoke, just two weeks after being defeated by the Potters in the Premier League. The feeling of revenge was strong among the squad and both Mattheus and Carlos Fierro struck to deny Stoke the chance of progressing on to Wembley Stadium and the Semi-Finals. David Beckham's men did not expect Reading to put up a good fight in the Semi-Finals, but underestimation almost proved costly as Aston Villa edged the Royals 2-1 in the first leg, with Greek midfielder Fotis Kalogiannidis bagging a fantastic brace. It was a close match but the squad was more than happy to settle for a scrappy win. 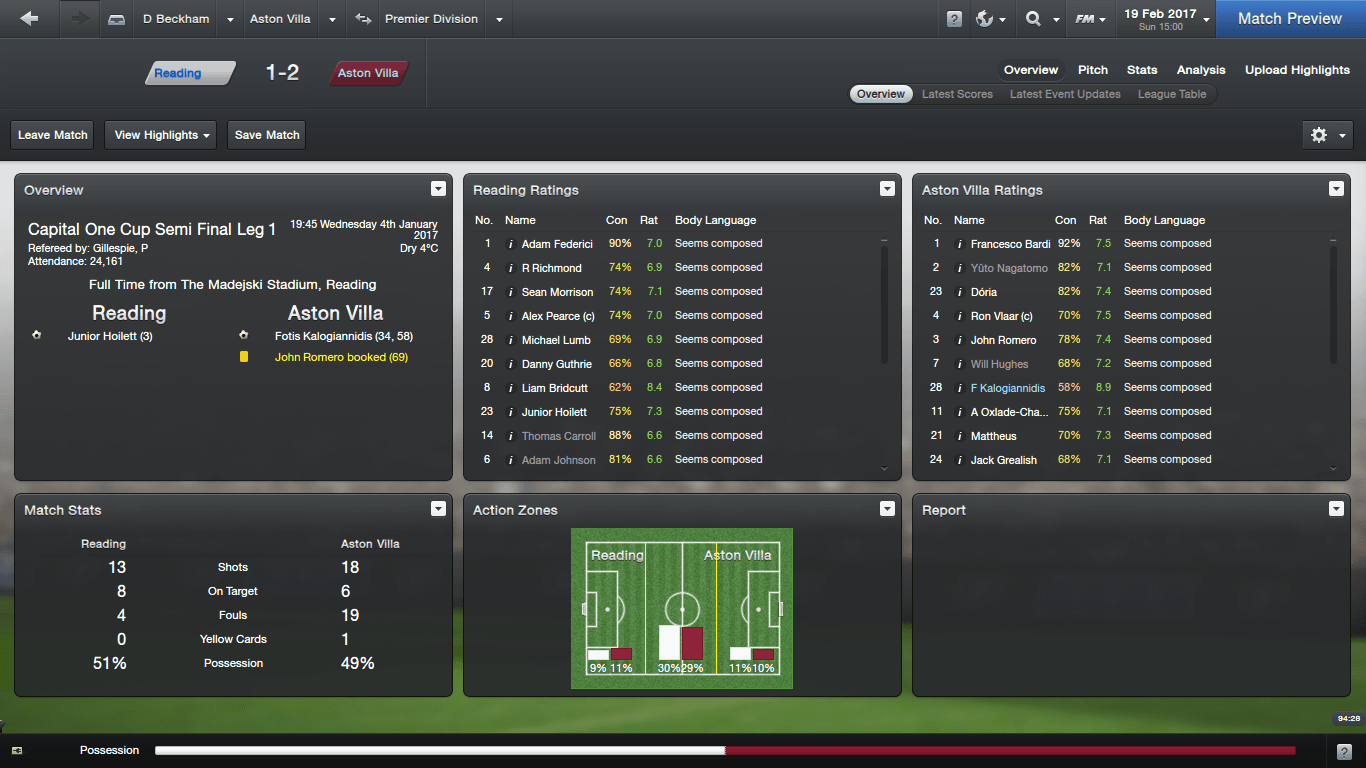 It was left up to Villa to finish up the job in the second leg, and they did that spectacularly, spurred on by their supporters at home in Villa Park. Crushing Reading 3-0 with goals from Fierro and Mattheus, the Villans move on into their third consecutive Capital One Cup Final with high spirits. 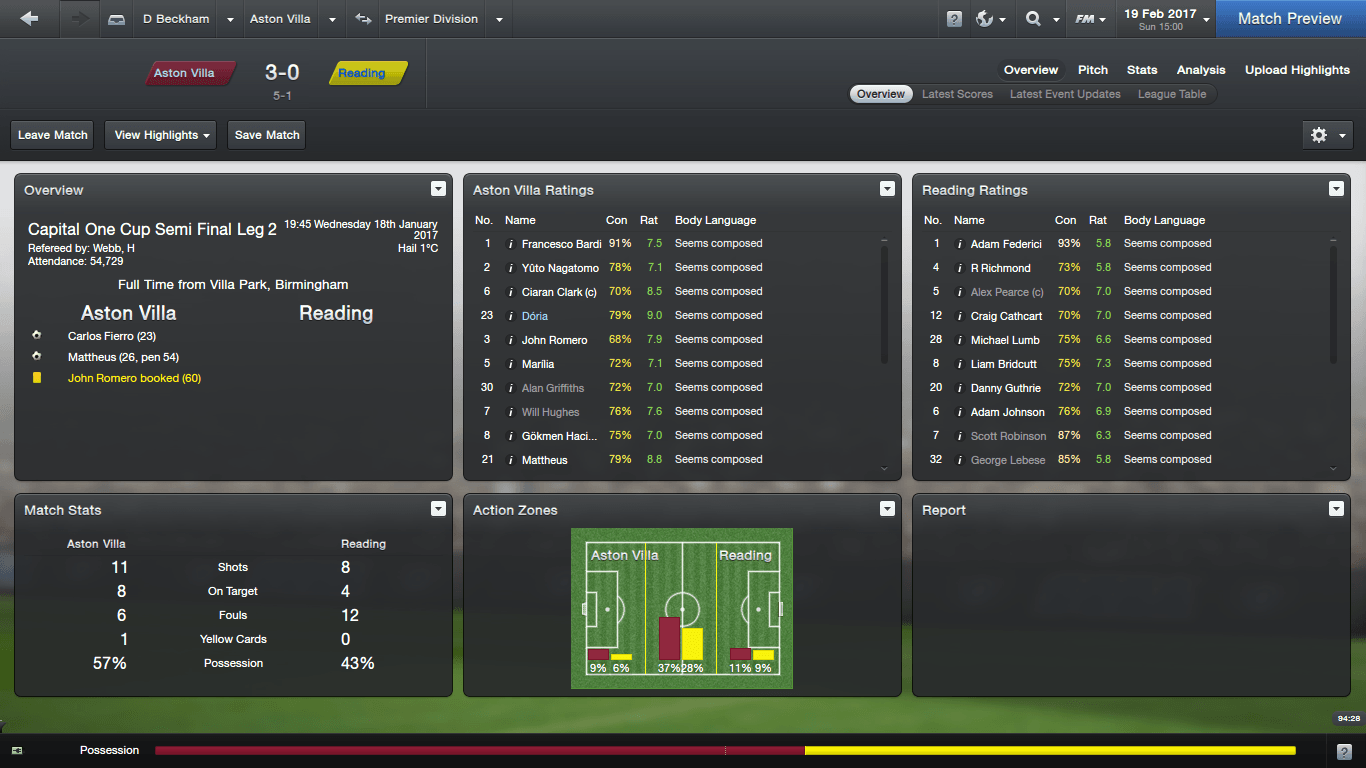 Cardiff, beating fellow Welsh club Swansea 5-1 on total aggregate in the Semi-Finals, will be looking to win their first ever League Cup, but will they be denied by the current holders of the cup?

See all of you at Wembley. 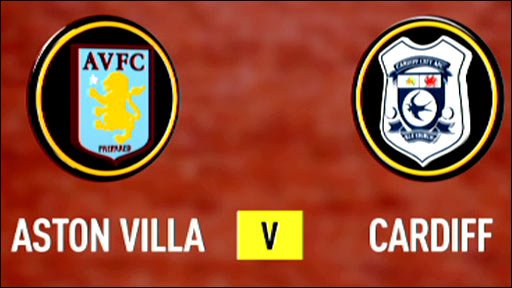 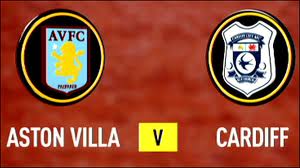 Martin Tyler: Welcome to Wembley Stadium! Today, the great home of English football hosts two sides - Aston Villa, and Cardiff City, for the prestigious Capital One Cup Final. Villa will be looking to defend their cup, having won it last year against Norwich, while Cardiff will hope to secure their first ever League Cup history today. Beside me here, for this interesting match, will be Sky pundit, England coach, and former Manchester United captain, Gary Neville.

Martin Tyler: Let's look at the line-ups for the Final! 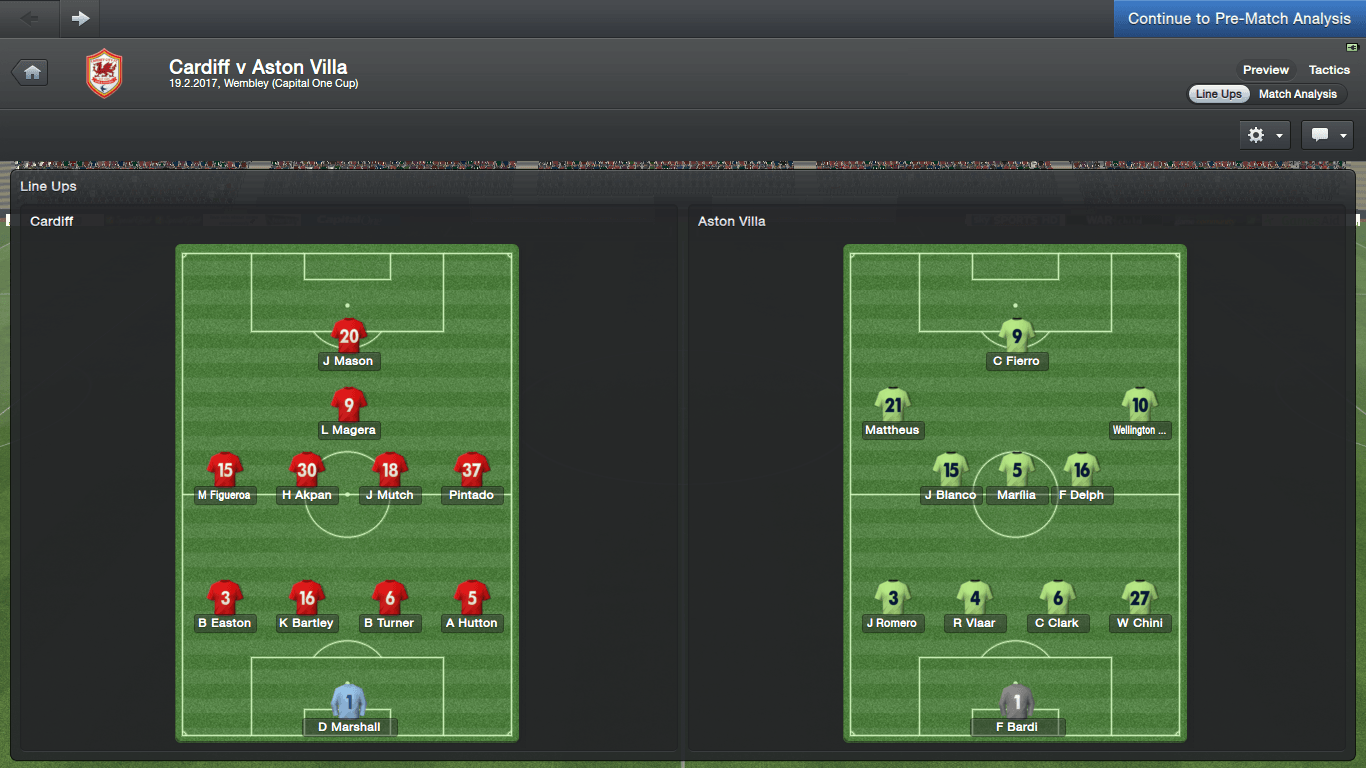 Martin Tyler: Cardiff have chosen to field one of their strongest eleven. David Marshall, always vital for Cardiff between the sticks will keep goal as usual today, and former Aston Villa player Alan Hutton will start for Cardiff. Ben Turner and Kyle Bartley have established themselves as one of the best defensive partnerships in the Championship and it'll be up to them to stop Carlos Fierro today. Lastly at left-back we have Brian Easton, who can cause massive problems for wingers on his day.

Gary Neville: Pintado, on loan at Cardiff from Napoli this season, has bags of potential and has been used as nothing more than a rotation player at Cardiff this season, but he'll be starting the match, an interesting decision from Michael Appleton. Jordon Mutch will be key for Cardiff in central midfield today and interestingly, his midfield partner of the day will be Hope Akpan who hasn't played a single Championship game for Cardiff since his arrival in the summer. Maynor Figueroa will be at left midfield for the match and the Villa full-backs will have to watch out for him.

Martin Tyler: Lukas Magera has been in amazing form for Cardiff this season despite being at the age of 34 and it's no wonder he's playing today. It'll be his last chance to get a trophy with Cardiff. He's set to leave when his contract expires in the summer.

Gary Neville: Spearheading the attack will be the fearsome Joe Mason, whose finishing ability is feared throughout the Championship!

Martin Tyler: Moving on to Aston Villa, Francesco Bardi will have the chance to win his first trophy with Villa. Ciaran Clark, Ron Vlaar and John Romero start in defense. 18-year-old youngster Walter Chini is also set to play his first ever game for Aston Villa with the absence of Andrew Black and Yuto Nagatomo through injury.

Gary Neville: A trophy in his first game, that would be brilliant.

Gary Neville: A three-man midfield of Fabian Delph, Marilia and Jesus Blanco has been fielded, and these three will be causing a lot of problems for Cardiff. Wellington Nem and Mattheus will be playing on the wings while Carlos Fierro is in the striker position as usual. Some great squads being played today!

Martin Tyler: Let's move on to the match.

1' - Welcome to Wembley Stadium, for the Capital One Cup Final clash between Aston Villa, and Cardiff City.

- WHAT A HORRIBLE MISTAKE BY FRANCESCO BARDI! The Italian goalie saves a shot from Jordon Mutch but lets the ball slip from his grasp, and Joe Mason is there to apply the finish! What an early goal! We have a feeling Bardi won't be getting any nice words from David Beckham at half-time!

39' - Brilliant run from Jesus Blanco as he goes round three Cardiff men to strike the ball towards goal from 30 yards, but David Marshall pulls off a magnificent save to deny the Paraguayan.

45' - HT: Cardiff 1-0 Aston Villa. A horrible showing from Villa so far, and their confidence seems to have been drained from Mason's goal and Bardi's mistake. It'll be up to Beckham to revitalize the team at half-time.

45' - Welcome back to the Wembley Stadium. Villa have made one change, with Turkish international Gokmen Hacieyupoglu coming on for Wellington Nem, who has been playing below average so far.

48' - Great passing football from the Villa players and it ends with Carlos Fierro firing a shot, but David Marshall saves!

60' - Will Hughes and Adam Campbell come on for Fabian Delph and Carlos Fierro respectively.

64' - PENALTY! Brian Easton brings down Gokmen Hacieyupoglu in the box! A chance for Villa! Jesus Blanco will take this penalty. Will he score?

- YES HE WILL! A fantastic penalty as Blanco slots it coolly into the bottom left corner! Villa have equalized! Game on!

90' - Welcome back for the first half of extra time. Cardiff come out with their first two substitutions, with Joey O'Brien coming on for Lukas Magera, who has had a wonderful game so far, and Jose Fonte coming on for Kyle Bartley. 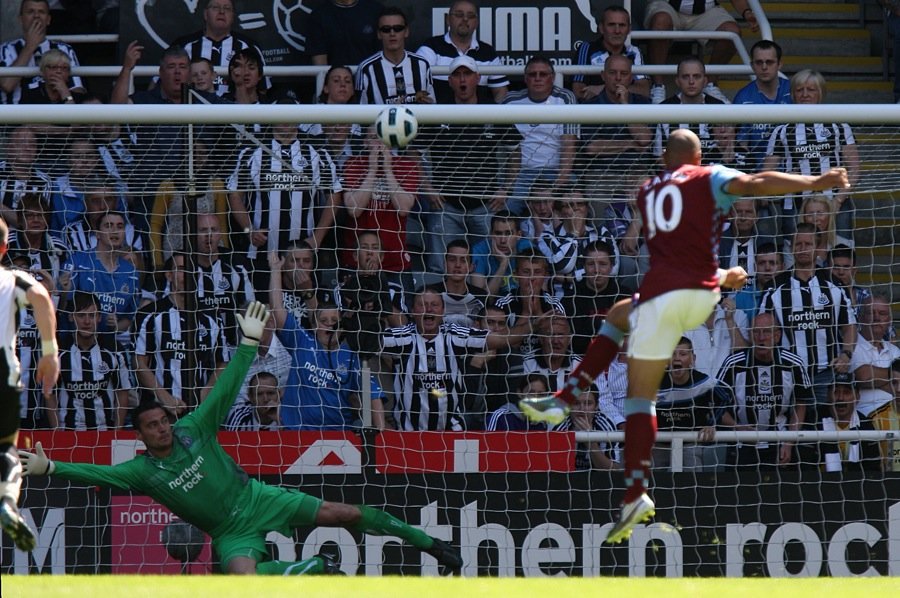 120' - Alright, the players are scattering from the center circle. David Beckham and Michael Appleton have decided their first five takers. It's on! Cardiff will go first.

- Ryo Miyaichi shoots it... into the crossbar!

- Gokmen Hacie does not waver and scores his first penalty for Aston Villa. Sublime finish.

- Jesus Blanco repeats his heroics from earlier, fooling David Marshall for a dive to the left before hitting it fiercely to the right. Great shot!

- Cardiff finally get their first shot in thanks to Joe Mason, who beats Bardi to shoot the ball into the top left.

- John Romero is up next for Aston Villa, and David Marshall pulls off a superb save to deny the Colombia international.

- Bardi tries to put Jose Fonte off, but fails as the former Saints defender hits it cleanly into the bottom right.

- Will Hughes hits it into the center of the net as Marshall dives to the right.

- Hope Akpan's penalty is SAVED by Francesco Bardi, AND THAT'S IT! 2-3 ON PENALTIES! ASTON VILLA HAVE WON THE CAPITAL ONE CUP, FOR THE SECOND SEASON IN A ROW! WHAT A BRILLIANT SAVE BY BARDI, AND HOW VITAL IT WAS! VILLA FANS WILL BE PARTYING THROUGH THE NIGHT! 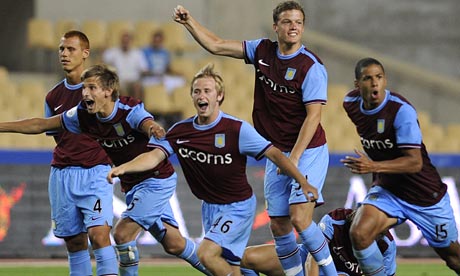 EDIT: That's my 500th post. Surely I could have wasted it on something better than a Gary Neville weird noise video.
1
Login to Quote

Glenn T
9 years
Thank you for the nice comments LJ, and that hilarious video 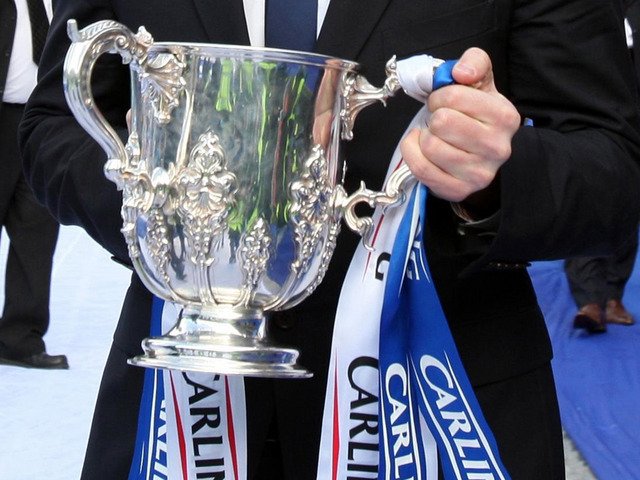 "It's absolutely fantastic to win it two seasons in a row and it's a magnificent achievement. It goes to show how we have been improving.

"The lads let themselves down in the first half but they were brilliant after half-time. They knew that they had to win, and not let the supporters down. I'm very proud of them.

"We may have won only through penalties, literally, but every one has their lucky day and it doesn't make the win any less worthwhile." He also applauded Walter Chini, who was making his first ever appearance for the senior team at Aston Villa.

"Walter did very well in his debut. He's developing very quick and I will have to start looking at putting him in the first team soon. I think he's going to be a very good player for Italy, and us, in the future."

Beckham has also encouraged his players to accomplish what they'd done with the Europa League.

swag
9 years
Hmm, targeting the Capital One Cup? I do that all the time.
1
Login to Quote

Aston Villa have 1 win and 1 loss from 2 Premier League games played this month but the focus is more on the cup games, as David Beckham led his Villa squad to Capital One Cup glory, the Sixth Round of the FA Cup, as well as the Second Knockout Round of the Europa League. They will battle against a familiar face - Arsenal, in the next round of the Europa League, after beating Sevilla on away goals. Meanwhile Liverpool will be doing all they can to stand between Villa and the FA Cup Semi Final. After a fairly good February, a tough March beckons for the Lions. 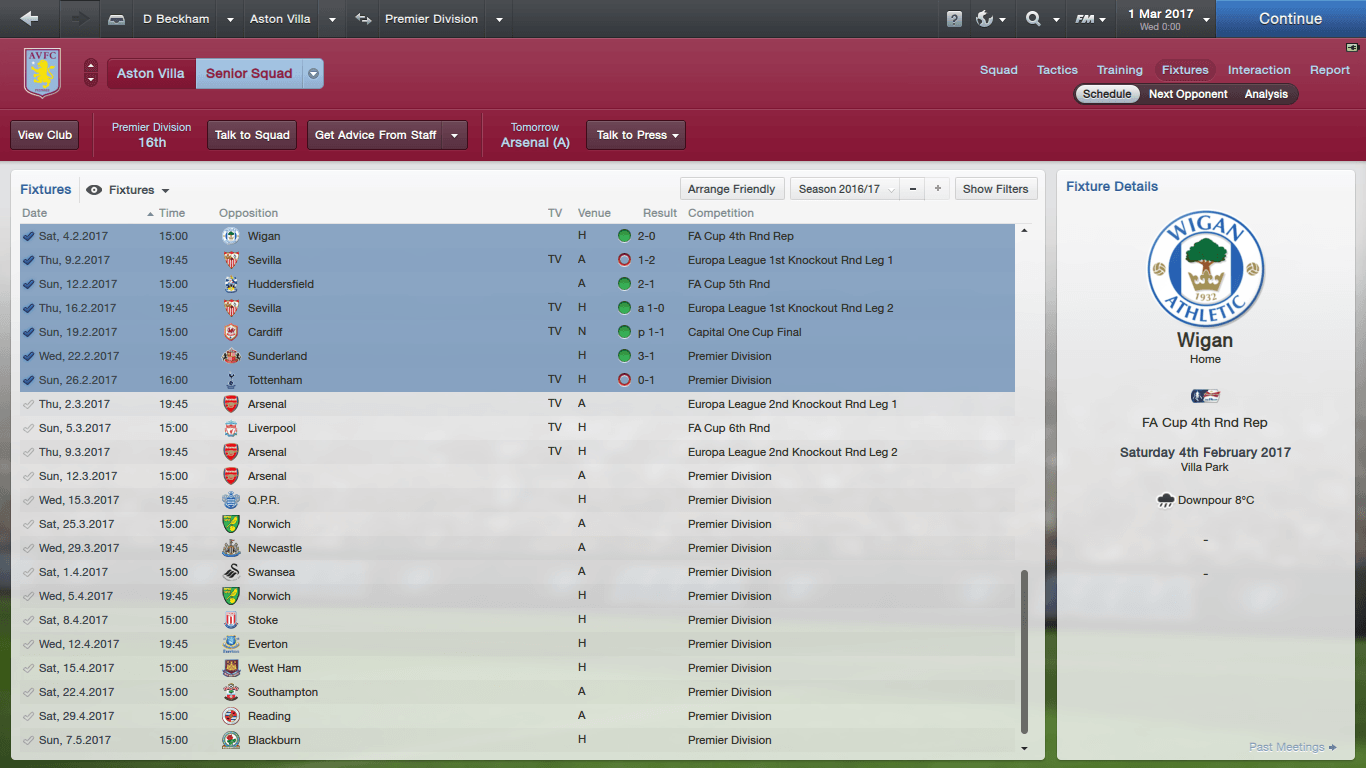 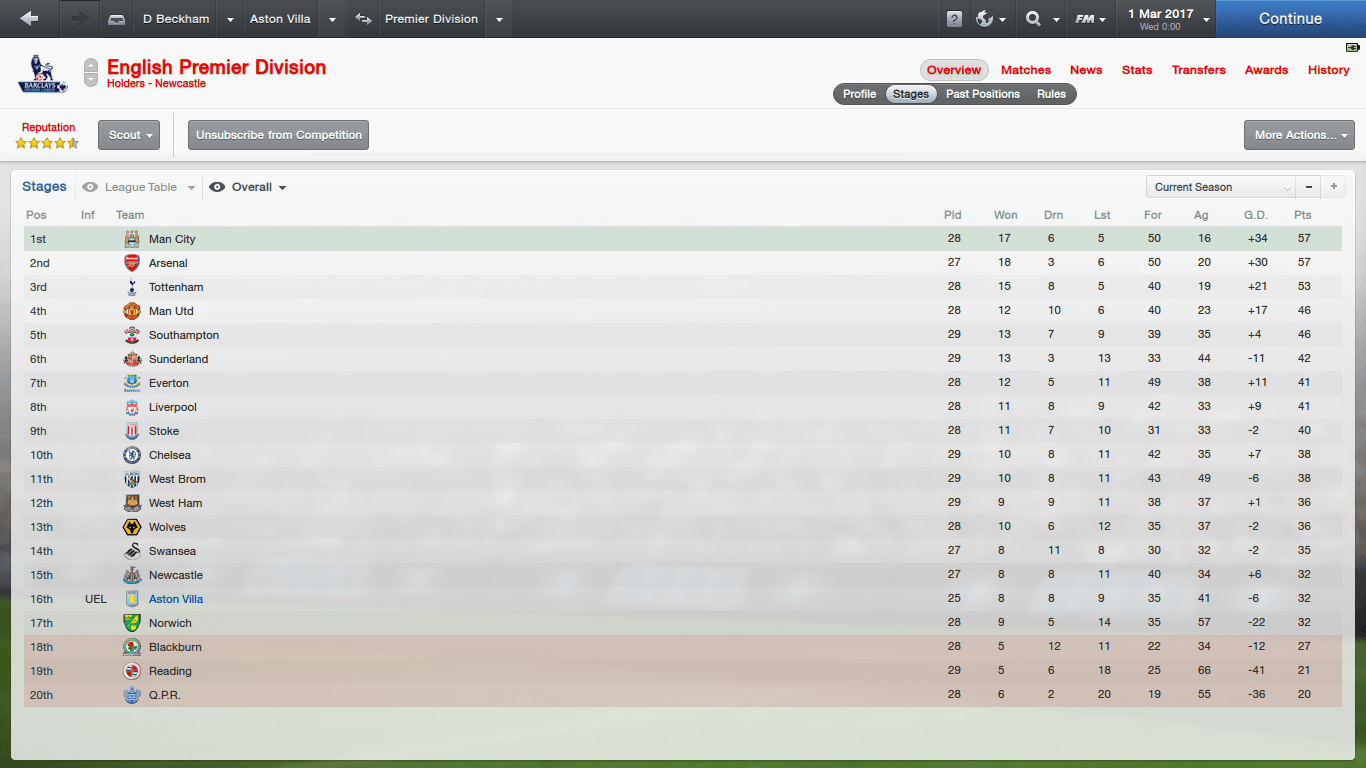 After a series of performances that kept Ron Vlaar out of the team, Daniel Montero has been duly awarded the Young Player of the Month award, beating Ryan Garland of West Ham's winning streak of the same award. 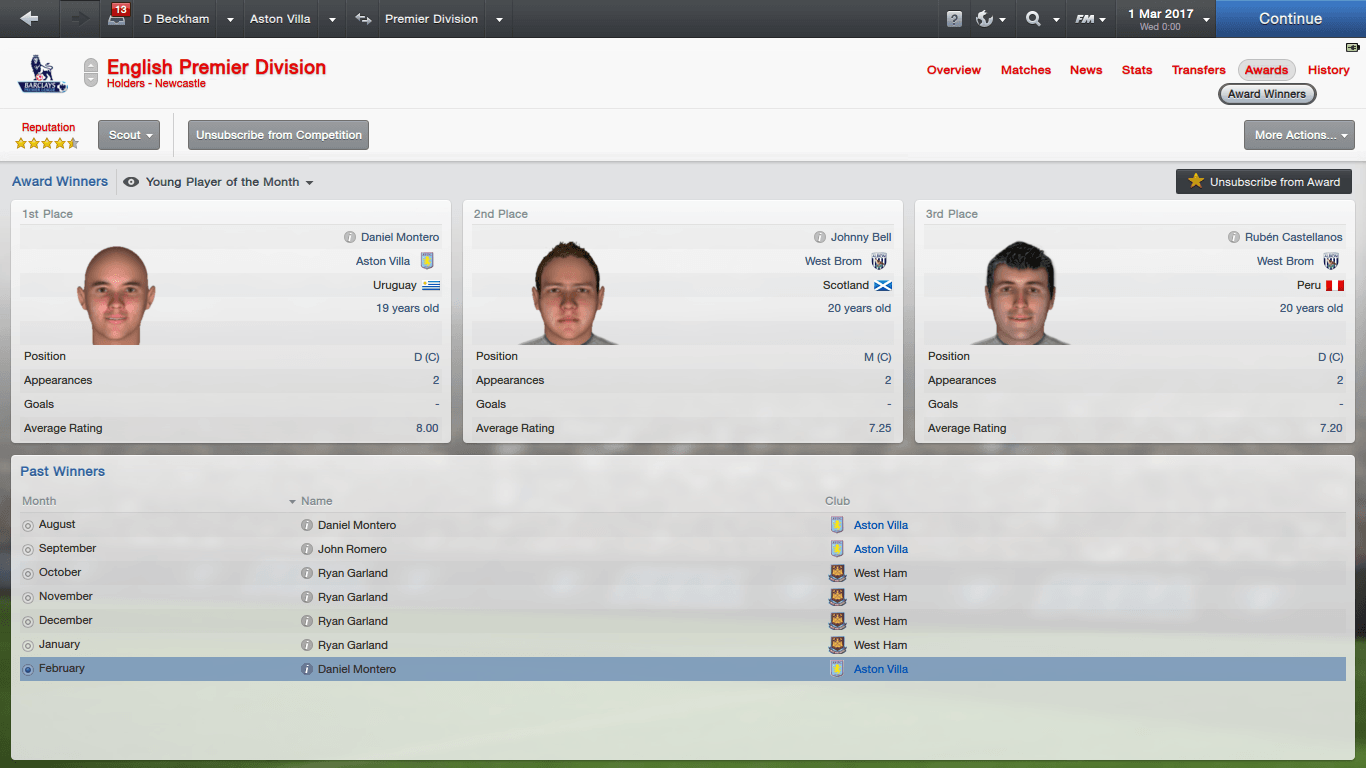 What are you talking about? Football Manager IS real life