Seni
9 years
Glen this has been a brillaint story, are you going to stay with Aston Villa?
Login to Quote

Glenn T
9 years
Thanks for all the nice comments, all will be revealed in the next few updates.
Login to Quote

Aston Villa left-back Stephen Warnock has announced his intention to leave the club after his contract expires in June. 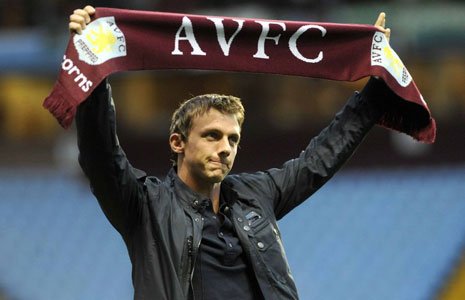 Warnock fell out of favor and was sent on loan to Bolton before current manager David Beckham took over the reins at Villa Park last year. He returned in January, with Beckham announcing his desire to keep Warnock in the squad and how the once England international fitted in his plans for the club.

However, negotiation failures will see Warnock leave the Lions next month, ending his five year association with Aston Villa.

Reports claim that Warnock wanted a guaranteed first-team spot, but Beckham was only keen to play him as a rotation option.

In his last six months as an Aston Villa player, Warnock made 12 appearances and managed to score one goal.
Login to Quote

I knocked on the door of the boardroom anxiously. I wanted to know why they wanted to see me so much. Randy Lerner had insisted that it was "urgent" and to "come immediately". I recognize Randy's voice as he shouts "come in", and I enter to be greeted by a sea of unfamiliar faces belonging to Aston Villa board members.

I walk towards the only available seat.

Randy Lerner: The board has called a meeting here today to discuss your future at Aston Villa.

I blinked, considering the possibility of getting sacked today. Then, I remember the contract I signed at the beginning of the season only lasted a year.

Randy Lerner: As you know, the contract we offered you at the start of the season expires next month.

Randy Lerner: Ok, let's get down to business.

He brings out a file and reads it.

Randy Lerner: For us, we were disappointed in your performance as manager over the season. However, it was a fantastic turnaround to get us to 12th place and we'll overlook this error for now. It was, at least, an improvement from last season although we want to see better from you next time.

There are murmurs among the board members and some nod in agreement.

Randy Lerner: We are giving you a chance to keep your job.

Randy nods towards the Managing Director of the club. Paul Falkner walks forward, presenting me with a contract.

He winks, and I take the pen gratefully, skimming over the details of the contract. 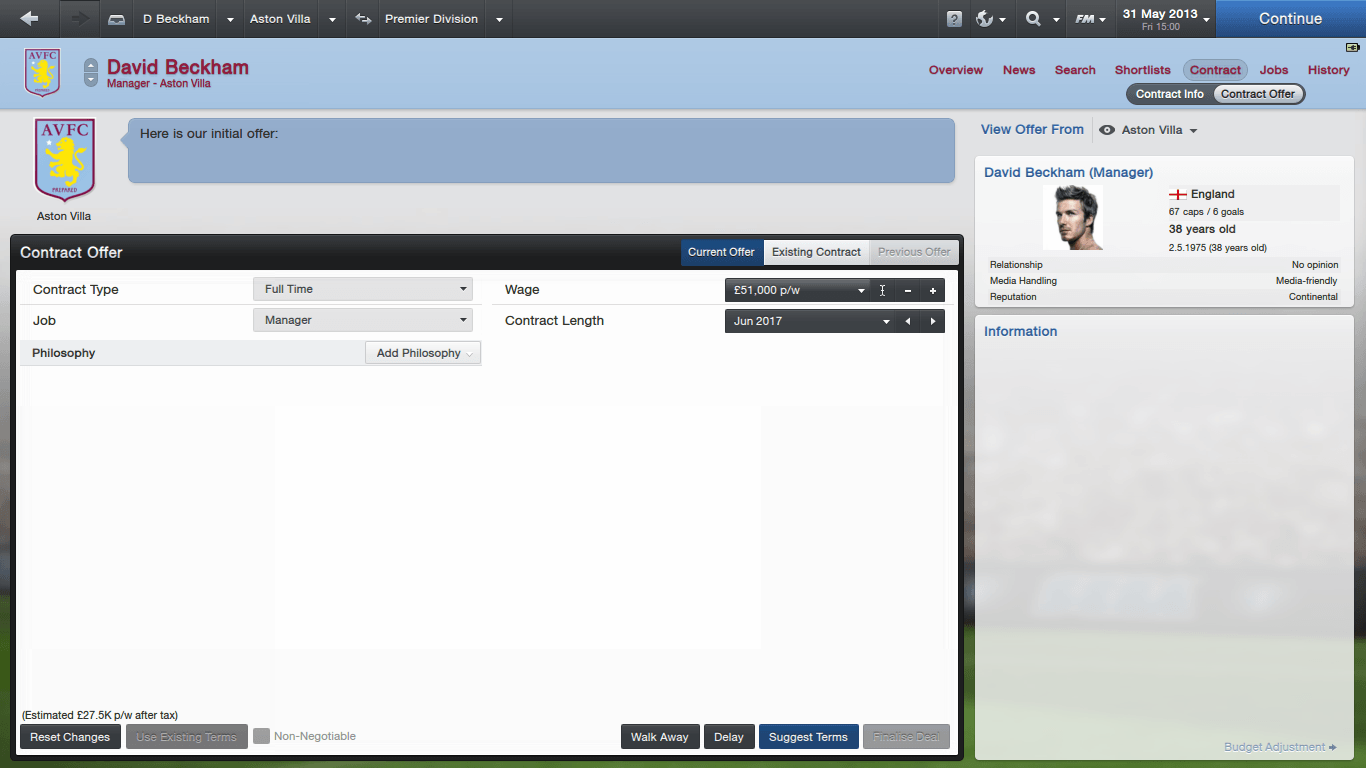 This was an amazing offer. It didn't compare to what I earned at the Galaxy, but it was good enough. With the swipe of my pen, I bound myself to Aston Villa for four more years. 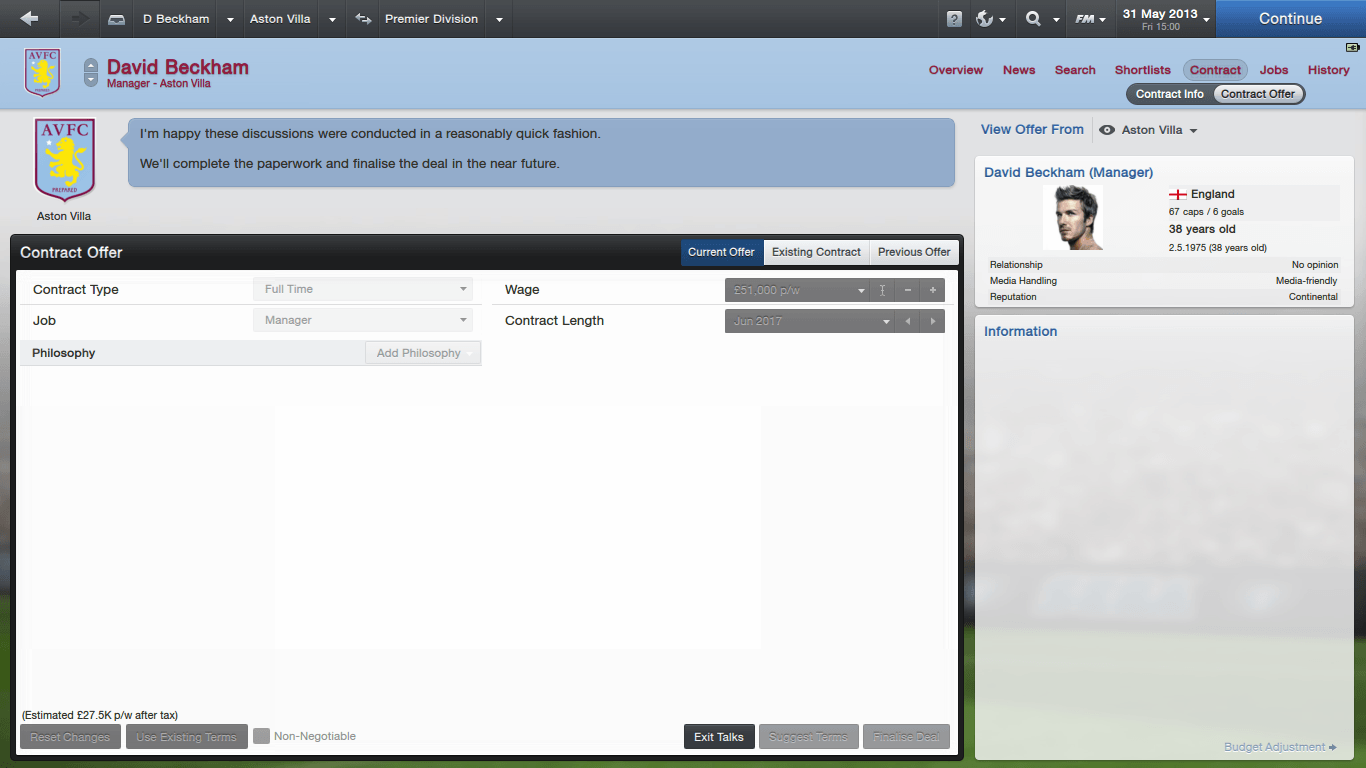 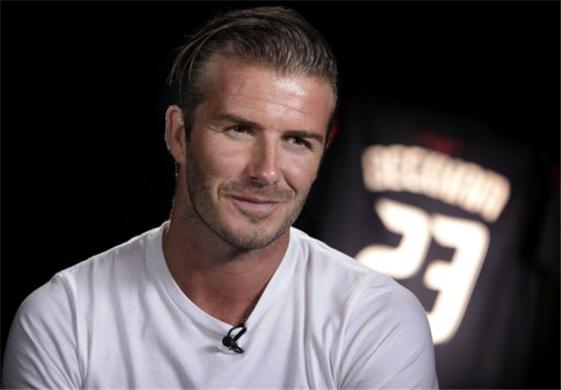 Aston Villa have announced that current manager David Beckham is set to sign a contract extension to his original one-year deal. The 38-year-old gaffer will now be under contract at Villa Park until June 2017. 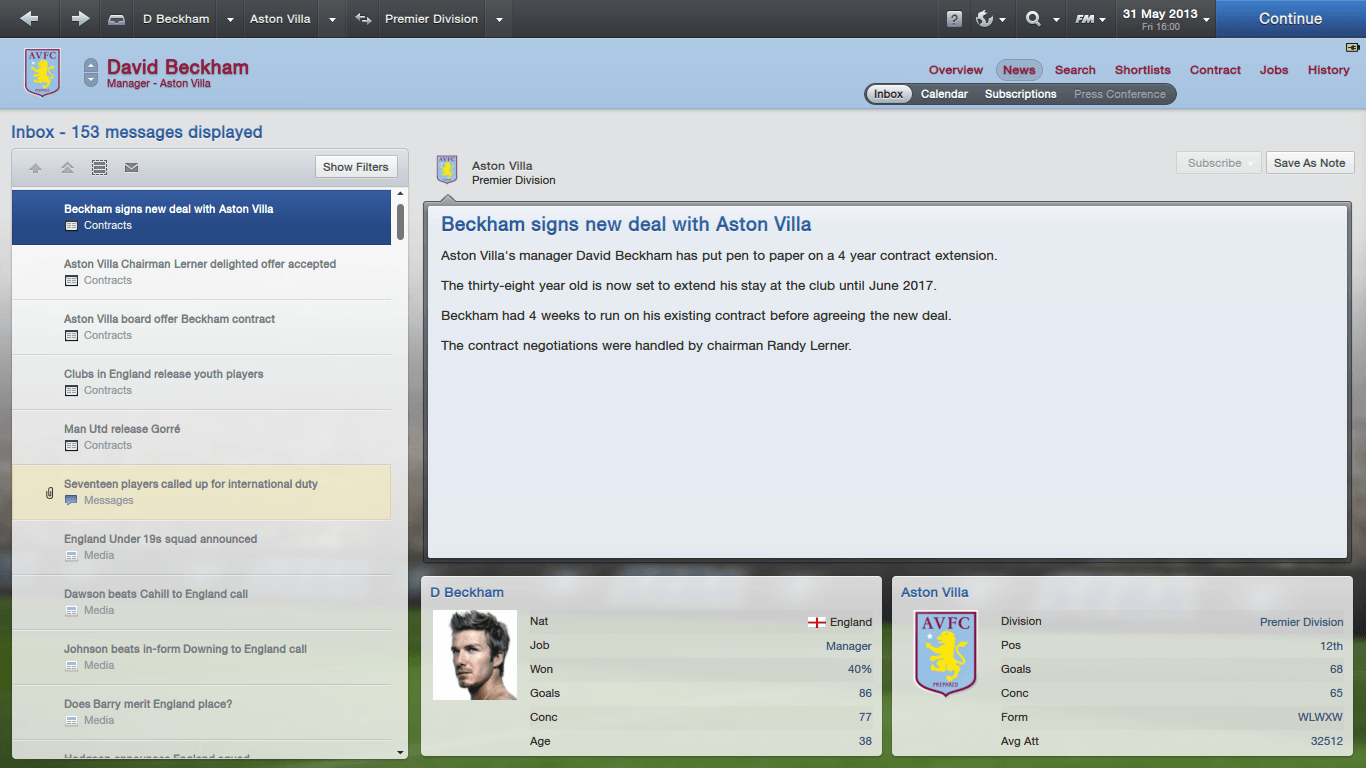 The move has pleased players and fans alike. Aston Villa's Wellington Nem revealed in an interview with the Daily Star that to have Beckham committing his long-term future to the club is "brilliant" and that the players could now "stop worrying".

Chairman Randy Lerner has also revealed his "delight" at Beckham signing the contract extension, as he revealed on the club website. 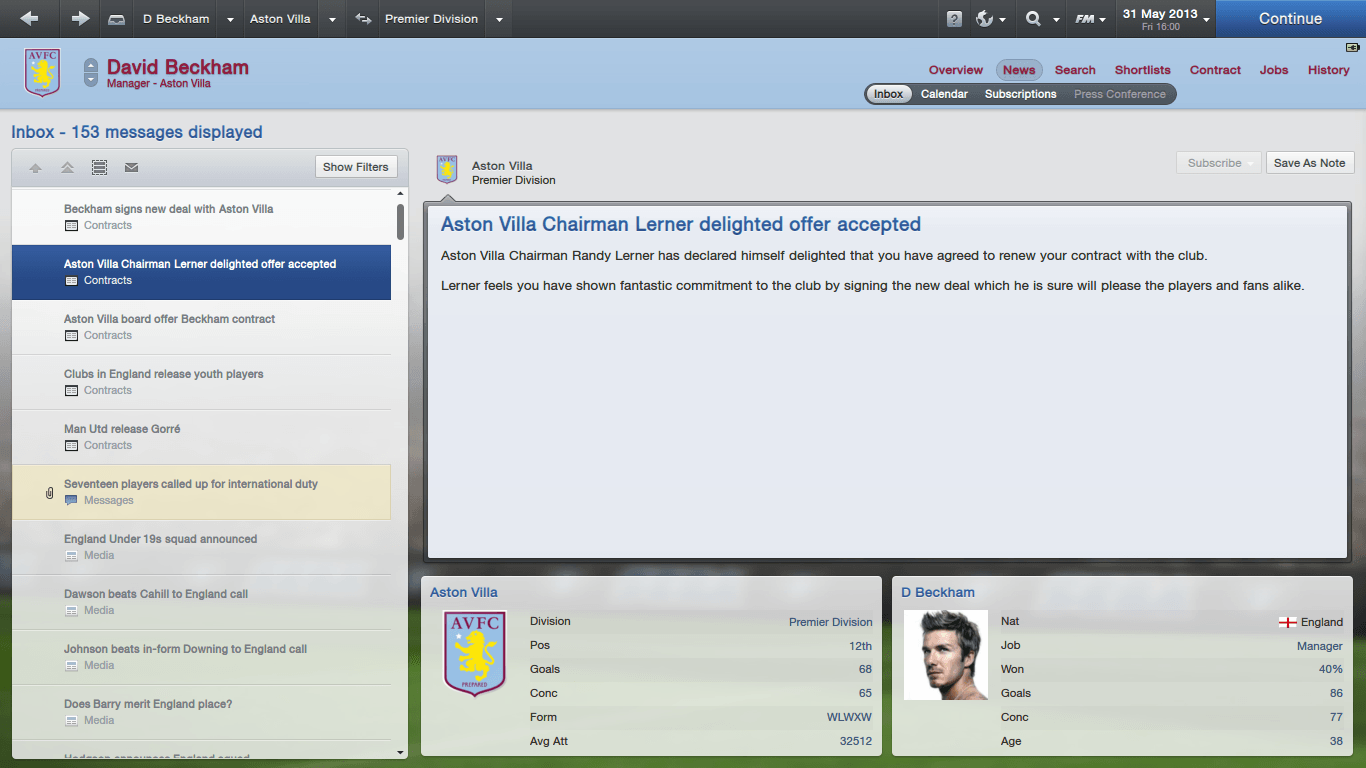 "David has been a very good manager and a nice guy to work with during his time at Aston Villa this season. He might have made some errors but he is a first-timer in the job and we are willing to give him a chance - thus the reason we handed him that contract."
Login to Quote

Jer
9 years
That link! Hehehheh! Great updates from you Glenn. This season can be yours and own the pL title. Sad to see Warnock go, but he shall regret it later!
Login to Quote 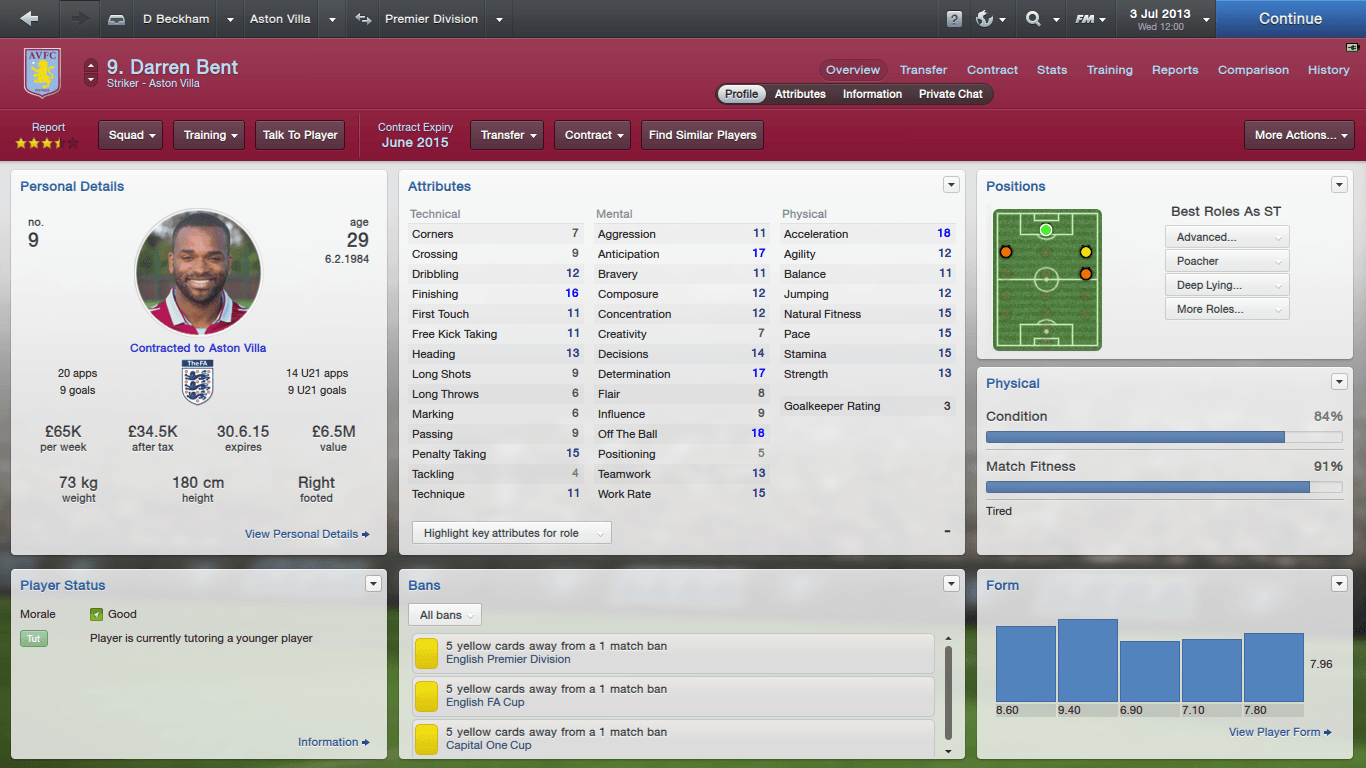 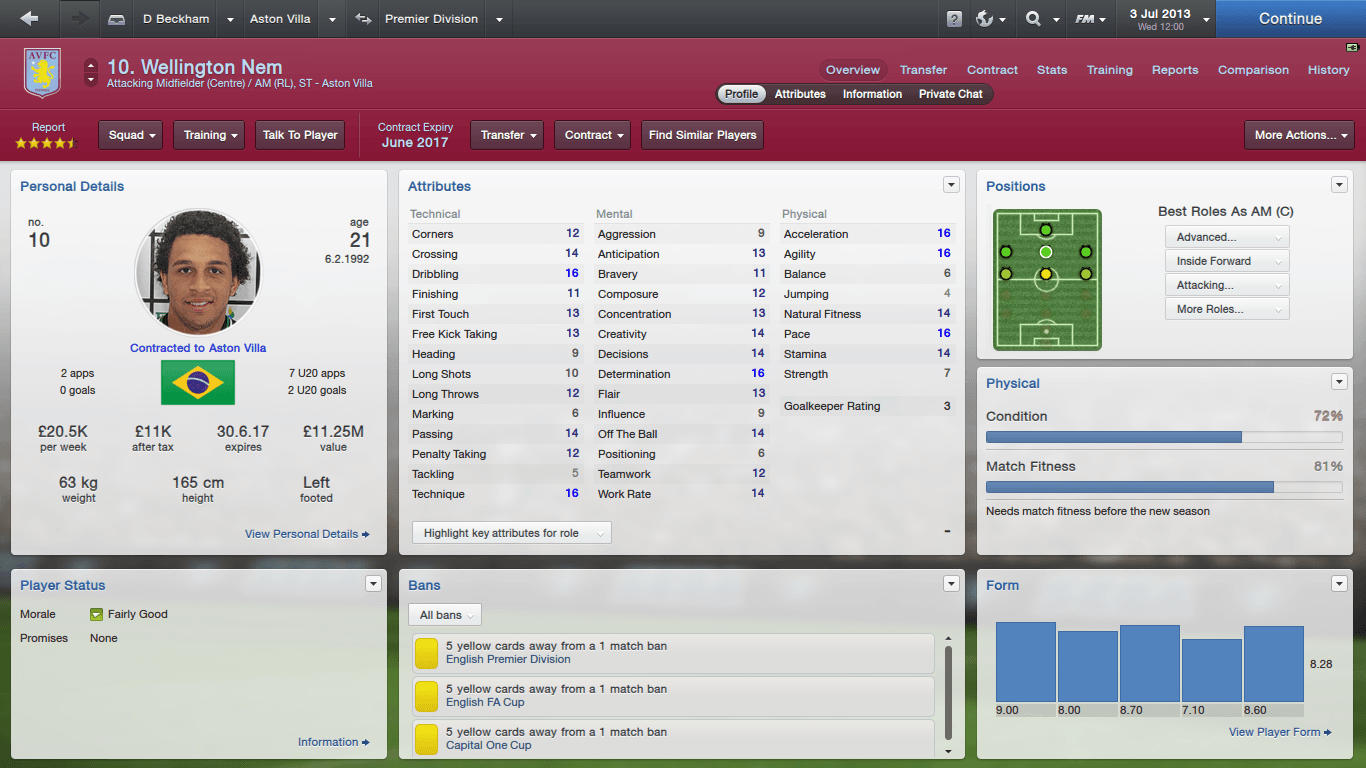 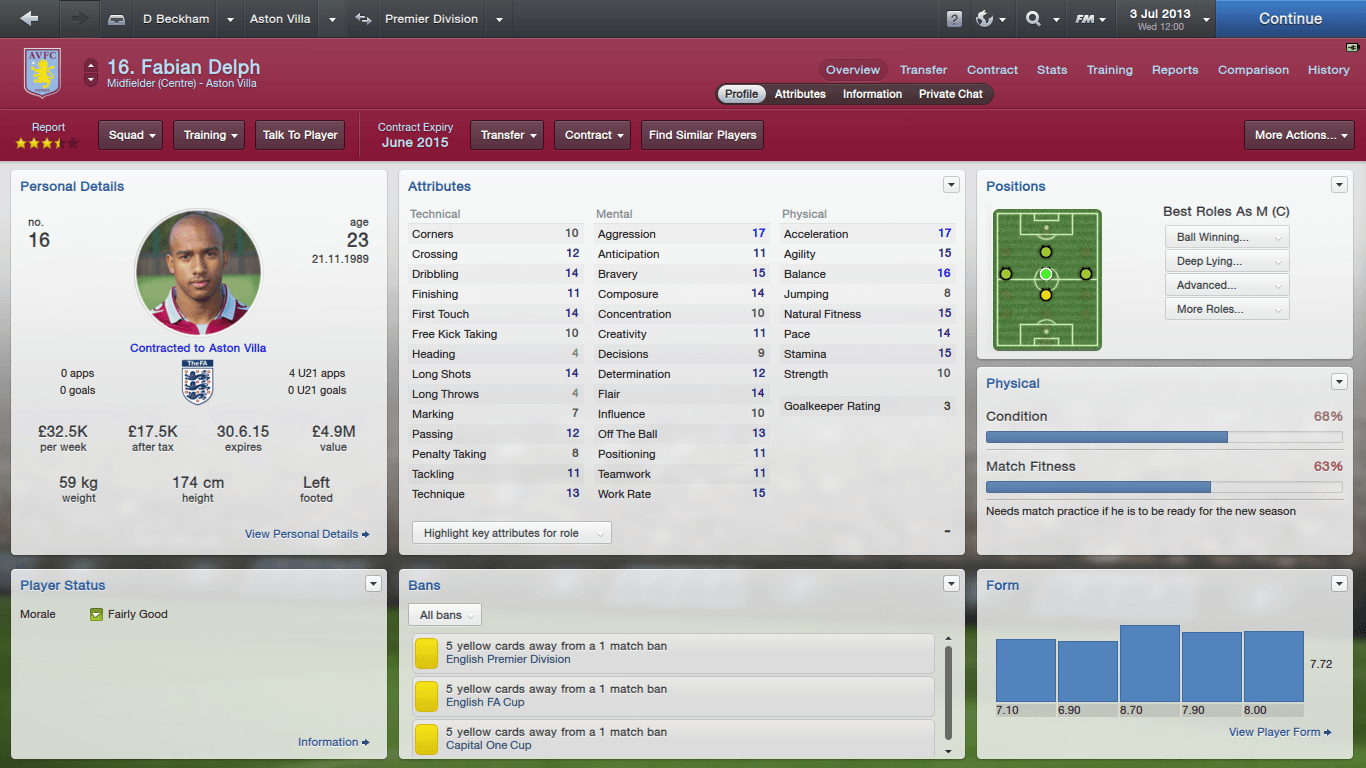 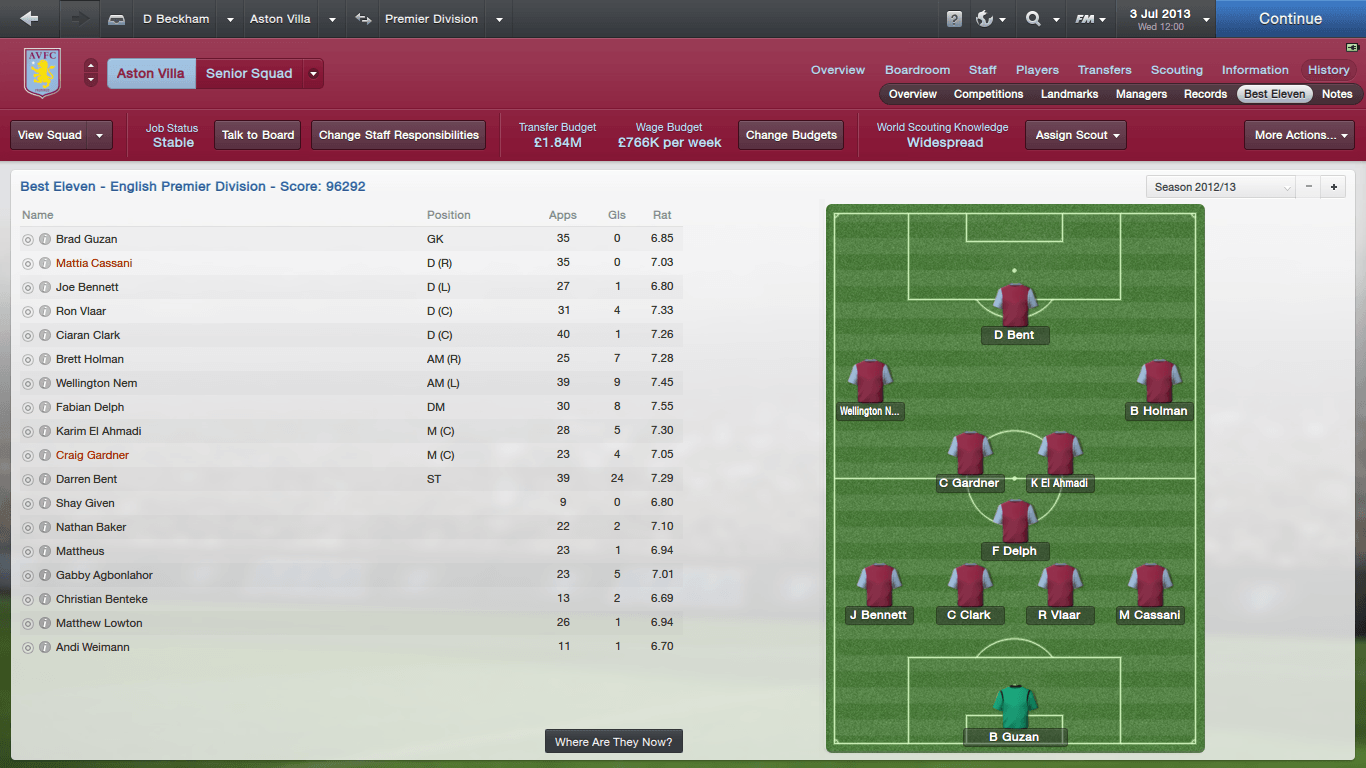 No1VillaFan
9 years
Being a villa guy i thought about starting a story to do with villa but i wouldnt be able to contend with yours, this is awesome
1
Login to Quote

Thanks a lot mate! 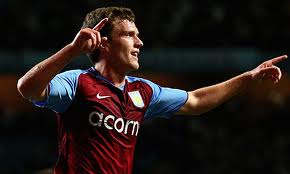 Craig Gardner and Mattia Cassani have both returned to Sunderland and Fiorentina respectively, after their loan deals with Aston Villa ended at the end of the season. 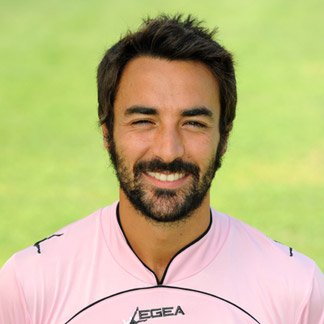 Both have had fantastic seasons with the club, although the former of the two, Gardner, eventually lost out on a first-team place in the second half of the season to the fearsome partnership of Karim El Ahmadi and Fabian Delph, both whom are expected to carry on the duties of first-choice midfielders this season.

Although Gary Gardner has previously expressed a desire to see his sibling return to the club as a permanent player, manager David Beckham does not seem too keen.

"I did contemplate getting Craig in for another season or permanently, but he is too good a player to remain on the bench," said Beckham. "If he comes here again he will only get a few games, be a rotation option, and we're also moving in on other targets."

However, Beckham did hint that Cassani could return to the club.

"Mattia had a brilliant season with us and he was really great to work with. I wouldn't rule out the possibility of him returning. We've only got one right-back at the club in Matthew Lowton after all."
Login to Quote 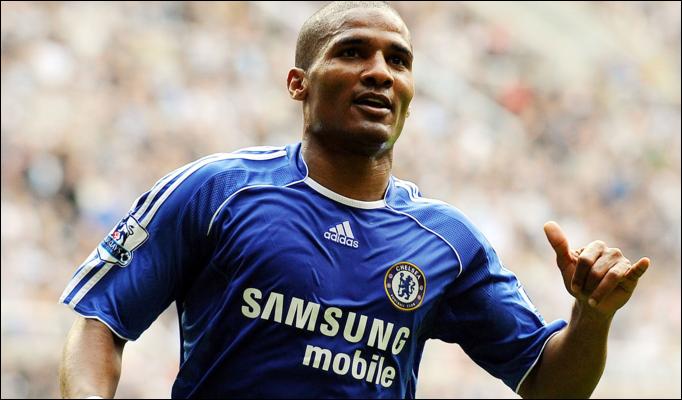 The 33-year-old left winger was released from Chelsea in the midst of last season, bringing an end to the illustrious six years he spent at Stamford Bridge. Despite being a first-team regular for the Blues since his arrival from Lyon in 2007, Malouda has been reduced to a mere benchwarmer since the start of 2012-13. However, he still remains a valued member of the France national team. 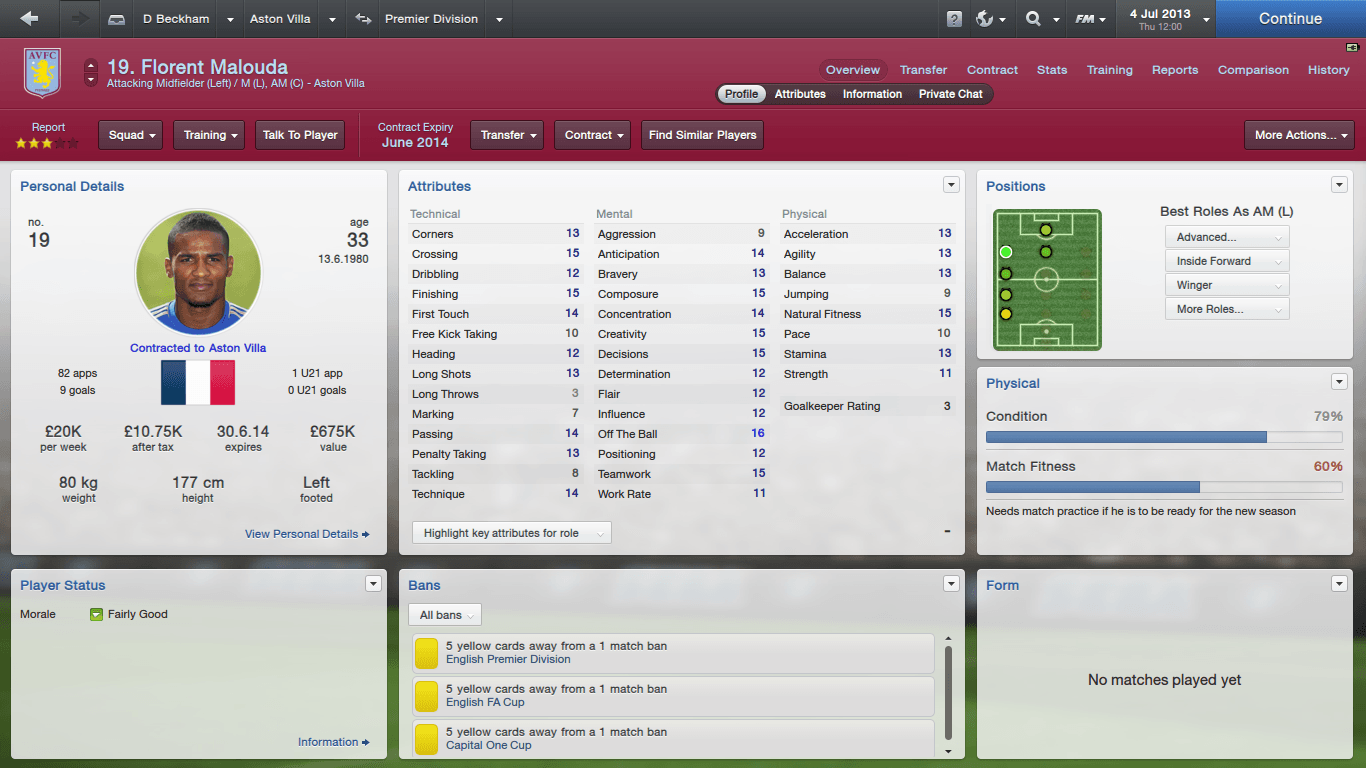 Villa manager David Beckham did well to convince him to reduce his wage demands, and from earning hundreds of thousands at Chelsea, he will now be getting 20,000 per week at Aston Villa.

That has not stopped Malouda from joining the club, however, who states that he is just happy that he can "play football again".

"It's great to finally belong to a club," said Malouda. "I am 33 but I still feel young. Hopefully I can contribute to the team this season."

The Frenchman is under contract at Villa Park until the end of the season.
Login to Quote

The first of them is Portuguese youngster Miguel Marques. The 16-year-old defensive midfielder agreed to sign a pre-contract with the English club, joining the Lions from hometown club Atletico CP. An emerging young talent, he has already been tipped to be the next Miguel Veloso. Marques will play in the Under-18s this season. 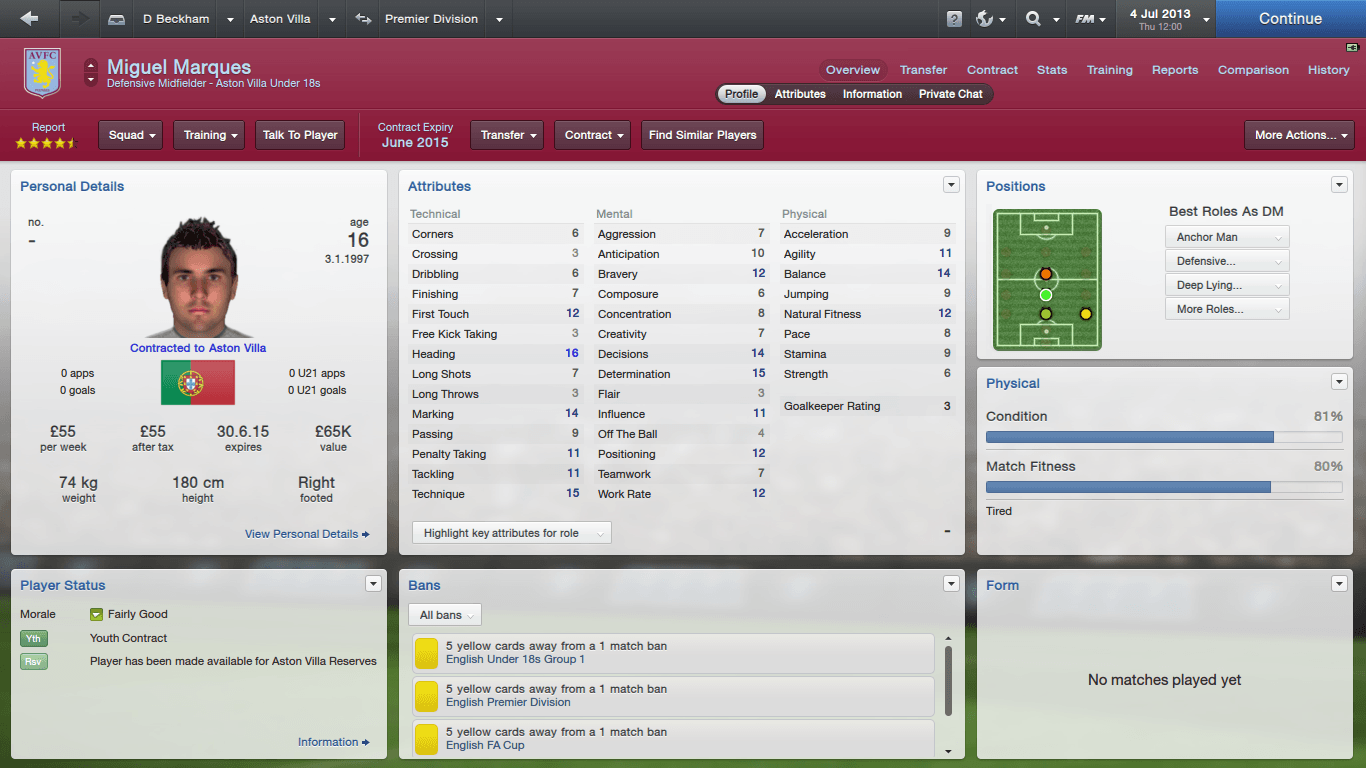 Will Hughes has also agreed to join Aston Villa from Derby in a spectacular 6 million deal, believed to have wiped out most of David Beckham's transfer budget. 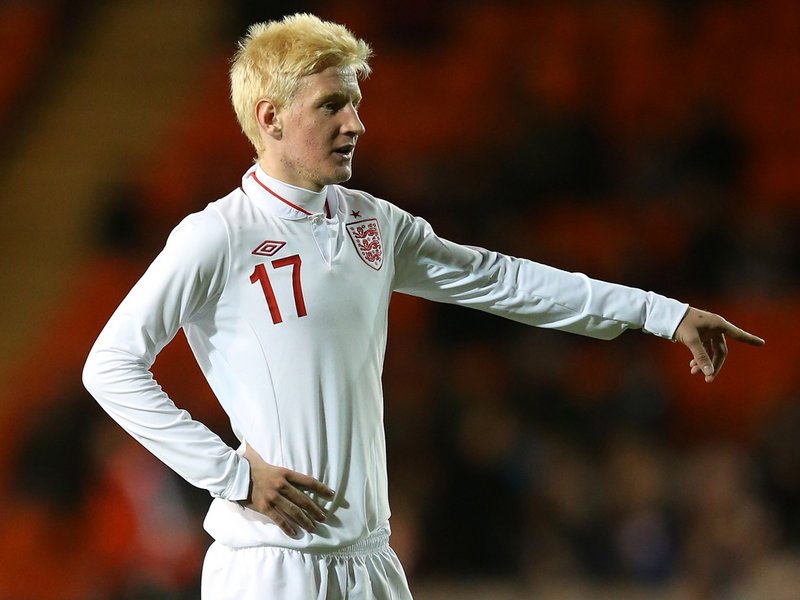 The up-and-coming midfielder is only 18 but made 44 appearances in the Championship for Derby last season and brilliantly impressed. The self-admitting Liverpool supporter will now look to take his Championship talents to the big stage of the Premier League, and has been awarded the number 7 by Beckham. 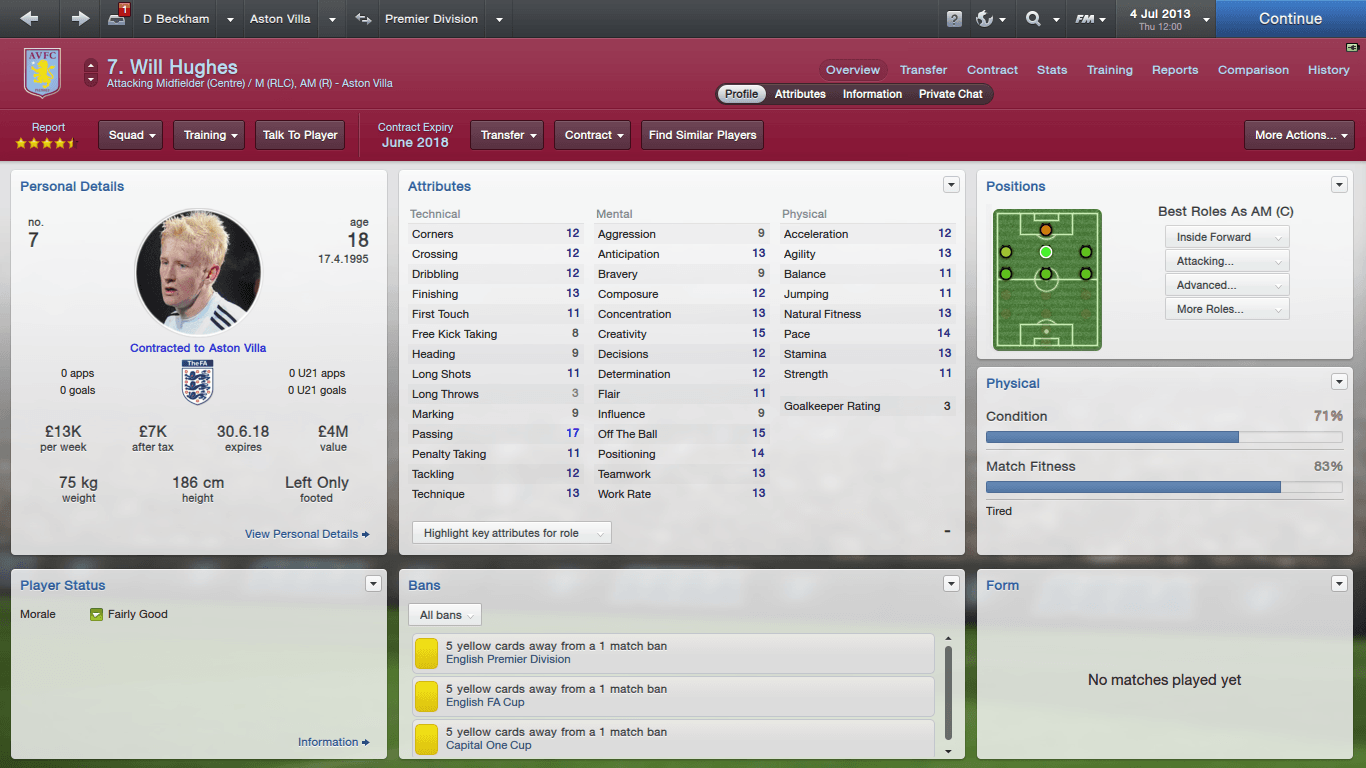 The last of the three is young Italian striker Mattia Destro, who has joined Aston Villa upon the expiry of his contract at Genoa. 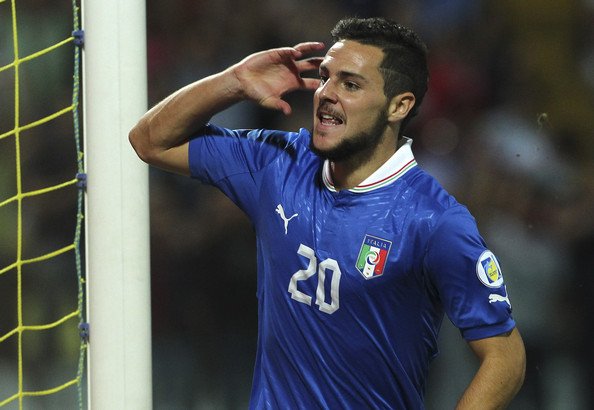 Coming from the youth academy at Inter Milan, 22-year-old Destro soon joined Genoa in 2010. However, it was on loan where he impressed, scoring 12 goals in 30 appearances during a loan spell at Siena. He was also farmed out on loan last season to join Roma, where he made 29 appearances and scored 11 goals.

Unfortunately for Genoa, the promising young poacher was not interested in continuing his time at Genoa, and jumped at the opportunity to play in England once Aston Villa offered him a contract. 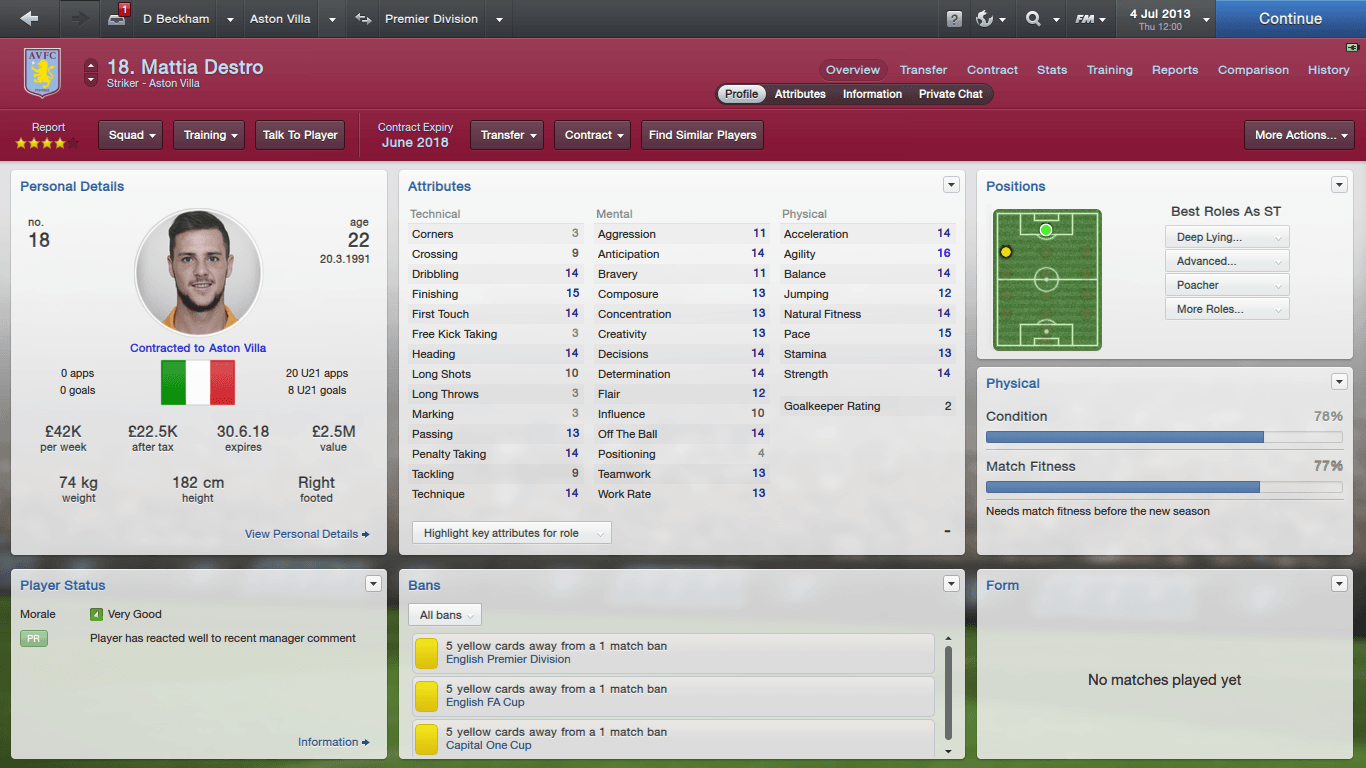 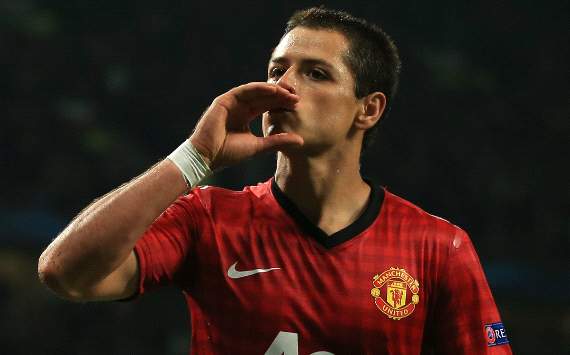 Manchester United striker Javier Hernandez, or Chicharito as he is known by, has agreed a deal to join Aston Villa on loan until the end of the season. 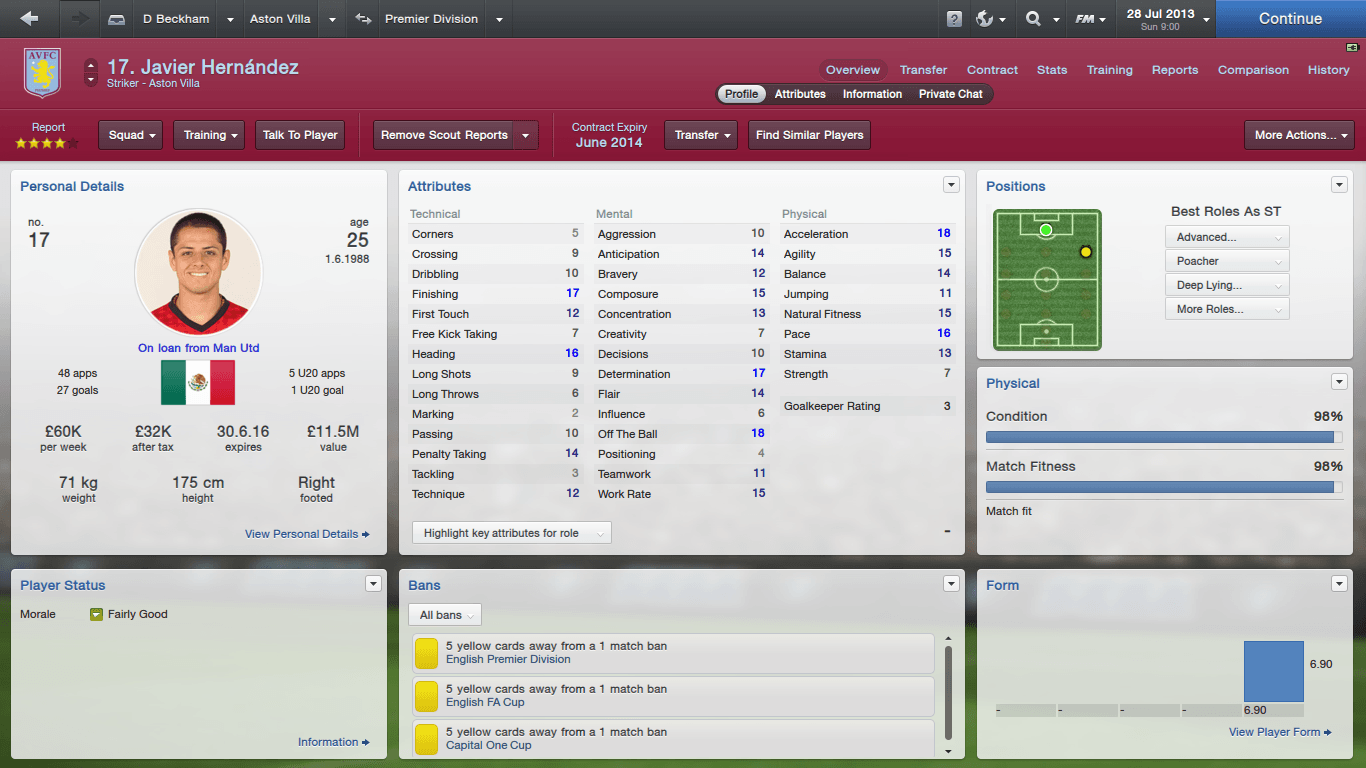 The Mexico international has been unable to get much playing time at Manchester United since the start of last season, only making 2 Premier League appearances before agreeing a six-month loan deal in January to play for Atletico Madrid in Spain, where he flopped, scoring 3 goals in only 8 La Liga appearances.

Chicharito will hope that his time at Aston Villa will go more smoothly.

"My hopes in being here is to secure first-team football and hopefully prove to Alex (Ferguson) that I have what it takes to be a Manchester United player," said Chicharito.

"The negotiation talks with Fergie was a pleasure to go through. Chicharito is a fantastic player and I have watched him for United. It will be great to have him on board."

With the arrival of Chicharito and earlier summer signing Mattia Destro, last season's top scorer for the club Darren Bent will be under severe threat to keep his place as first-choice striker for the team.

Christian Benteke and Andi Weimann are also set for the Aston Villa exits.
Login to Quote