Cheers it felt so awesome beating Germany on the way

Jamesg237
9 years
You have managed to achieve a lot in that season! Big congrats. Really good to see a "lesser" team making progress in the Premier League even if you had to beat to destory Liverpool FC along the way. Well done the World Cup Win, shame it will never happen in real life so enjoy your moment!
Login to Quote


After the success of the previous season the squad were back for pre-season in a rather upbeat mood. However, Patrick having looked at the squad knew changes need to be made in the playing staff as some were simply not good enough and coughing up big wages. Soon a few first team players notably Park Ji Sung and the thug aka Barton entered the office with nervous looks.

PM: Good afternoon fellas. I hope you've had a good time off and I know you're feeling fit for the new season. However I have some rather bad news for both of you as well as a few others. I'm afraid I am going to have let you go. Barton. you're nothing but a complete and utter thug and I do not want players like that in my team so you can jog on. Park, you've served QPR well and we will miss you but you just won't be part of my plans as I am looking for younger talented players. I wish you all the best, except for you Barton.

Thug: Well screw you. *Headbutts the boss and leaves the room*

Park: Fair enough, boss. I'm not entirely happy but I understand where you're coming from and you're right I will want to play more regular and if not here then best elsewhere. Would you like anything else?

PM: If you could send in Anton Ferdinand please, otherwise that'll be all, thank you for everything.

Anton: What can I do for you boss?

PM: I just want you to f*** off out of here, you're a useless twat and a bloody cry baby especially after that whole JT issue. *Literally chucks Anton out the room and slams door*
Login to Quote

Justice
9 years
I love a bit of drama, looks good

The drama continues as Barton shows up with a bat


After the drama from the previous day, Barton showed up only for him not to be let in by security. Barton was later seen entering the office and smashing up the office completely from top to bottom and left it in a complete state. Patrick entered the office later on and could not believe what he had seen.

The boss immediately knew who it was and has since then tightened security furthermore by adding guard dogs and more security guards. McKeown called the police but could not do anything due to *sufficient evidence.*
Login to Quote

QPR kicked off the season against Man City in the Community Shield. After everything that happened in the last week, the players did not feel up to it and it showed as they failed to really turn up. However Park, on his debut scored soon before half time with a lovely curler far out of Hart's reach. City started to continue their domination as they pressed QPR and finally they equalised when Belgian, Boyata scored his first Man City goal with a powerful header. They soon went in front as Man City went on the counter and Aguero scored a memorable goal as Silva flicked the ball in the air and Aguero thumped the ball into the top corner. An outstanding goal with even Patrick applauding the goal. Dzeko killed of the game ten minutes later with a close range finish. The result and performance showed Patrick still has a long way to go with QPR and hopefully in the next season or two can learn a few things.
Login to Quote 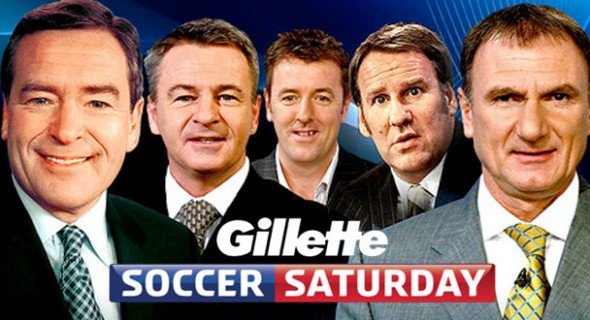 The five lads were back with us for another season to talk about the big headlines, keep us up to date with results and plenty of banter. Jeff Stelling a proud Hartlepool fan was joined by the following, Paul Merson, Matt Le Tissier, Phil Thompson and finally Charlie Nicholas.

Jeff: Good morning football fans for another long but entertaining season. Here back with me today is the old, lazy well they don't need introducing. You know who they are.
*Paul and Matt chuckle*

Jeff: First thing's first. What did you make of the bust up between Barton and McKeown?

Matt: It was unbelievable. After the incredible season they had you would have thought this would be the last thing to have happened. I think that McKeown was right to get rid of Barton but maybe over-reacted. Hopefully the dust will settle quickly because QPR will need to have another good season. They've brought in some quality players-sorry going off topic. I'll carry on-like Henderson, Park Chu Young, Downing for quite small fees so Patrick has done well in bringing in players

Thommo: I agree but Barton doing what he done, trashing the managers office was an atrocious reaction. He should not even be playing the beautiful game. Why Blackburn bought him, god knows why. He's not a footballer, he has been rightly named a thug.

Jeff: Just 10 minutes to kick off As you know its another season which means another season of Super 6 where you make predictions of selected EPL games. It's absolutely free to play so please sign up if aged 18+. And the last of todays super 6 is Fulham vs QPR and this is what the lads have gone for:

Jeff: Phil will be watching the Fulham-QPR game.

Two and a half hours later:

Jeff: So QPR grabbed the 3 points, Phil. What did you make of the game? Did they deserve to win?

Thommo: I'd say so. They really got stuck in and the new boys many of whom were starting impressed for their new club. I was really impressed with Bosingwa who is usually weak in defence but today he was superb getting an assist and scoring the winner. He certainly made the difference today. It's nice to see some high profile players for QPR as they will face a rather tough season with them competing also in the Europa League and with the experience of Defoe, Cissokho, QPR can certainly have a successful season.

Half an hour later.

Jeff: Well that's it for this weekend. I hope you had plenty of fun, your team won and enjoy the rest of your weekend.
Login to Quote

When is he never pissed off

You are reading "The Rise of the Three Lions".