JT: "Okay, let's get to our first meeting of The Development Saga! I appreciate that you two decided to not take a holiday this year so we can make a start on our development plans for the club. Our first point is to address our scouting network and our club affiliates. Do either of you two have any questions before I fire away with the long, boring speech I've had planned for weeks?"

JT: "Okay, I'll briefly address club affiliates, as there is not much to talk about on that matter. We currently have one affiliated club, which is Stirling Albion from Scotland. We've established a good loan system there, which will help us as we have a high amount of Scottish youngsters in our ranks. In terms of new club affiliates, myself and Kevin will take it upon us to research a new potential club affiliate every six months or so, depending on what criteria we are looking to fulfill. It would be nice to just get a huge amount of affiliates just like that, but these things take a lot of time and will only happen slowly. I can promise you that we will be trying our best to gain the best possible affiliates for the club. Any questions?"

PH: "Are you and Kevin looking in to another club affiliate at this time?"

KJ: "No we aren't for now. Our primary focus is to get all the planning done before we execute it. I can promise you that we will be trying to get a new affiliate before the new season starts, but it is still a big maybe."

JT: "Okay, let's move on to the scouting network. Myself and Kevin have discussed which nations deserve the full focus of a scout in, and what regions we should have other scouts look at. Here is the full list of nations and regions that we should have scouts for, with one scout per item."

JT: "I know it looks like such a daunting task to get a team of that size together, and it is not one which we will assemble overnight. We will look to perhaps hire ten scouts this year, and then add to that tally as we go on. I suppose for now it is not too important as to which nation or region is covered, provided we have Wales and Northern Ireland covered for the upcoming season. Luckily we already have England, Scotland and Ireland covered, which will save us some time... I think that's it for this meeting, tomorrow we will discuss your transfer targets for next season and what price range they will most likely cost."
Login to Quote 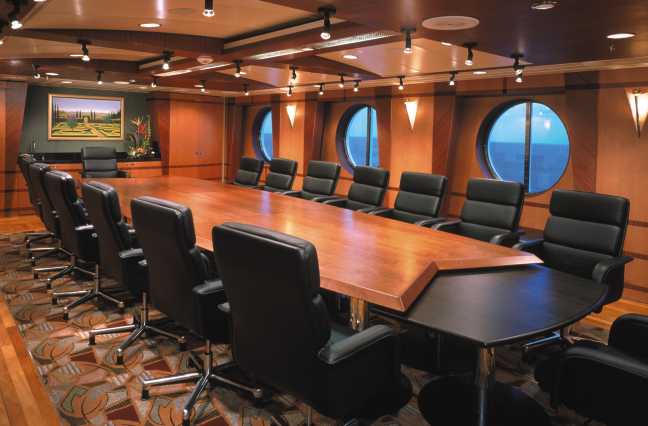 
JT: "Good day gentlemen, so we are here to discuss your transfer targets and what I am willing to spend on each transfer. I have looked at the finances and as a football fanatic, I would love to give you the whole £30M that we have in the bank, but unfortunately that isn't the case. As a chairman and a business man, I need to look at the most viable option for the club, which isn't easy. You are looking at a budget of give-or-take £20M, not including what you earn from selling players. I hope you two can work around this figure and bring in the players you would like to bring in. So, who are your planned transfers?"

GM: "Myself and Paul have compiled a list of possible list of transfers for each spot we need filled. Right now, we are looking to fill in six spots in the first team squad and we have a number of targets. We need to sign two goalkeepers, two center backs, a left back and a right winger. I myself am happy with the budget you have given us as we are looking to sell one or two players who don't quite fit in to the squad, and not to mention the wages saved on releasing Osbourne and Co."

JT: "Paul, is this a fair assessment?"

PH: "Well obviously I would have liked a little more money but as you rightly pointed out, we have to think about the club when we are spending big fees on players. As Gareth said, there will be a couple of departures which will hopefully aid our cause to sign our planned targets." 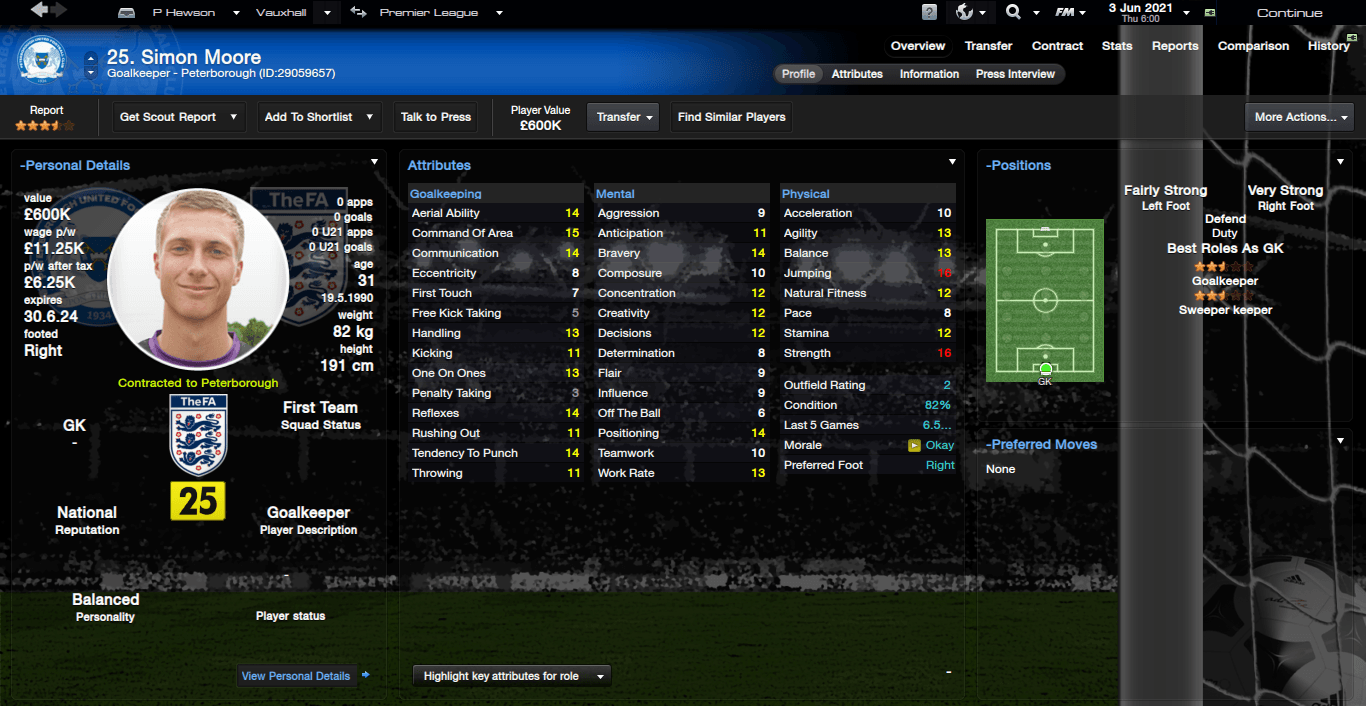 A rather unknown, but very experienced goalkeeper. Simon Moore is a very good shot stopper and would provide great cover for our primary goalkeeper target. He is a very consistent 'keeper and is a smart choice to have on the bench, in case of emergency. He is a great commander from the back and he can get the message across to his defenders well. He is also very tall, which means crosses aren't so much of a problem for him to reach. His positioning and reflexes are very good too. He is a Premier League quality goalkeeper. 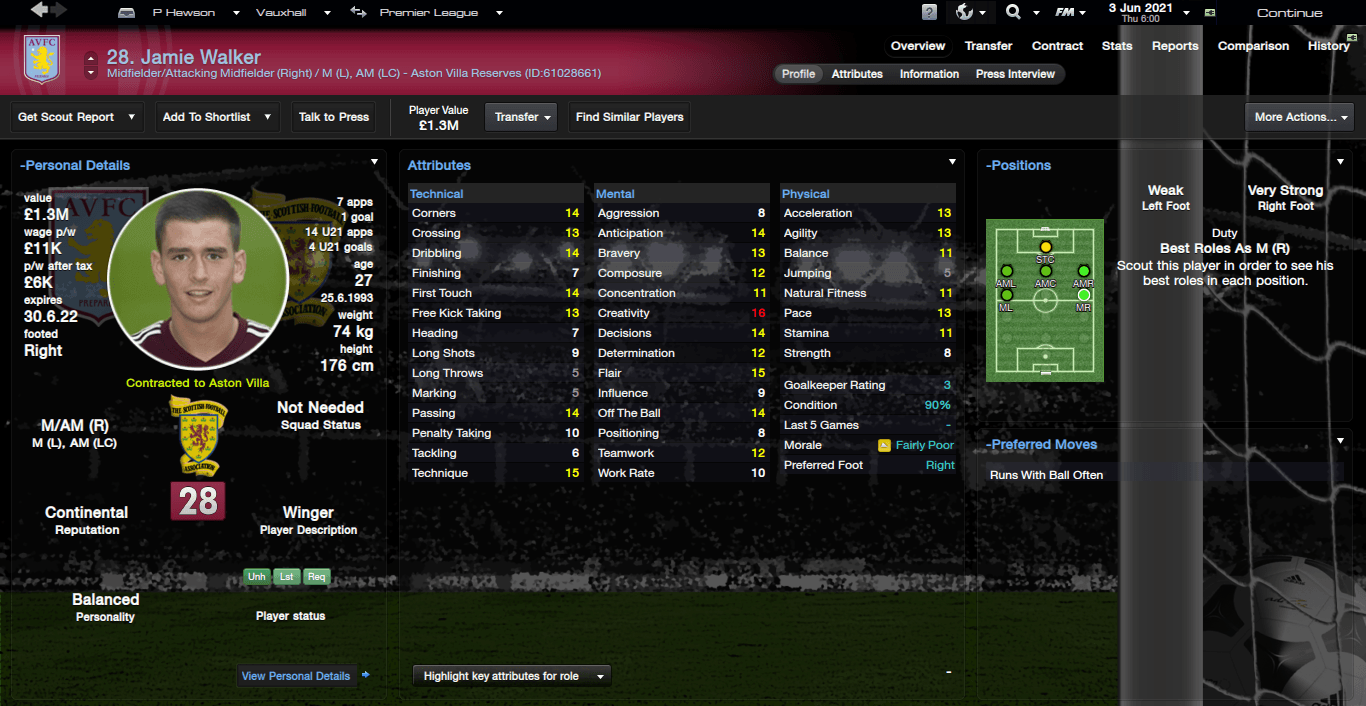 A very well-rounded Scottish winger. Jamie Walker has represented his country on seven occasions, which is no easy accomplishment. After falling out with Aston Villa boss Pat Boner, Jamie Walker has been on the transfer list for a while. He is a quality player and would play well in the Premier League. He is skillful and he is good on the ball. He is also a very creative player, and his passing is quite good too. He is a great thinker and understands the game very well. Another benefit is that he is a former team-mate of Gary Gardner, which means they have experience playing alongside each other. He might not be good enough to start for us, but he would certainly fill the gap that we need. 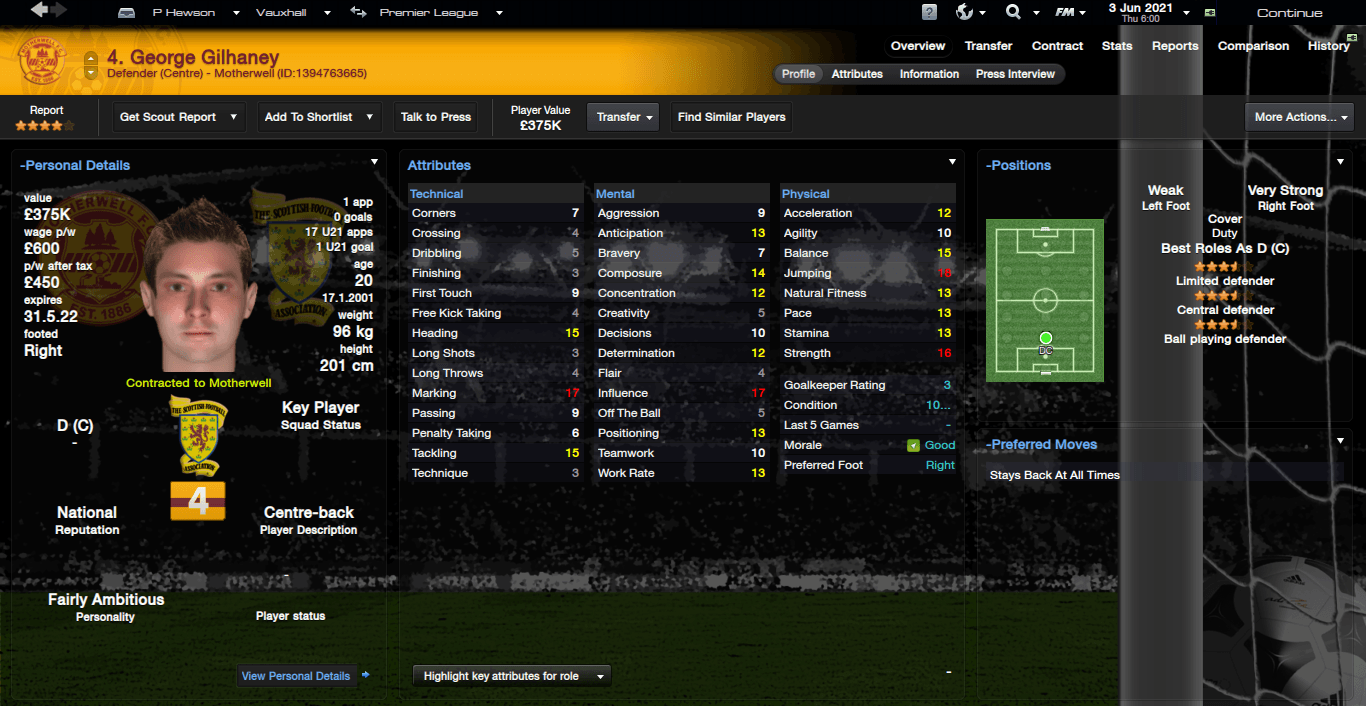 A very influential young defender. George Gilhaney already has a Scottish cap to his name and he has been Motherwell's best center back for three seasons now. My new scouting network discovered this gem and recommended I sign him up before anybody else do. He is a colossus in defence for us, standing over two meters tall. He is a great tackler and brilliant in the air. He is also rather fast for a defender, especially for one of his height. He is also very strong and has good stamina. He has great composure and is a great leader. He would be a wonderful signing for us to make and would fit in very well. 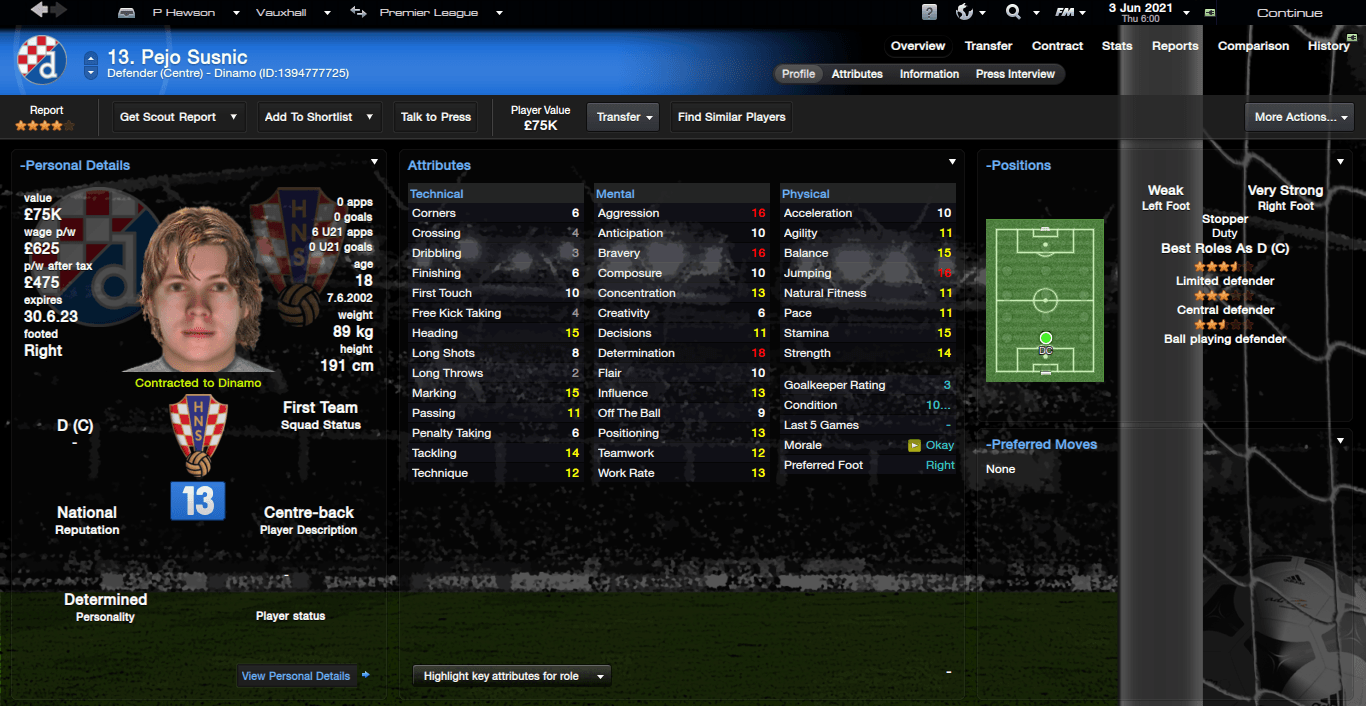 A very promising youngster from the Dinamo academy in Croatia. Pejo Susnic is a player who was only just recently brought to my attention by my new scouting network, who deserve a lot of praise already. Pejo is already a very capable defender, despite only being eighteen years old. Luckily he is eighteen years old so he fits in to our guidelines for foreign purchases. He is a very determined and a very brave defender. He is also very tall and possesses a great jump. He isn't the most technical defender around, but that can be bred in to him when he arrives. He is very strong and has good stamina. He can become a very good defender for us. 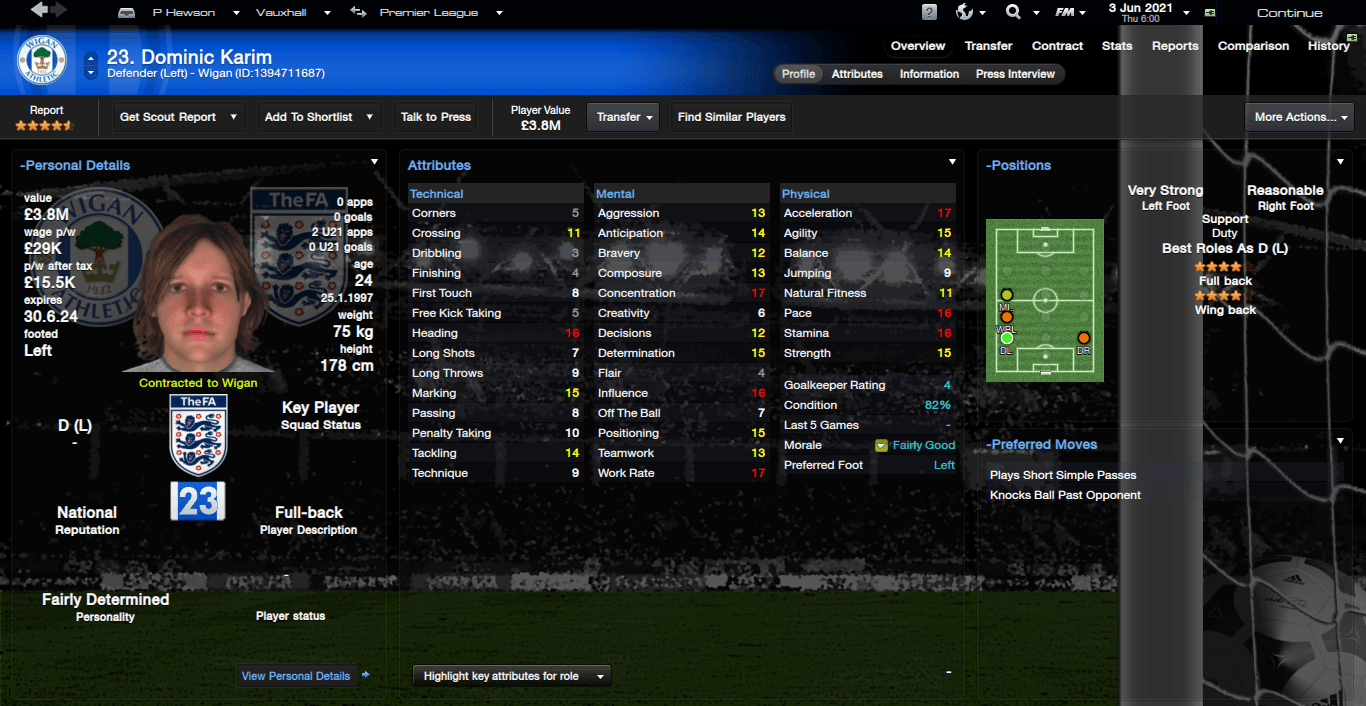 Wigan's star in the Premier League last season. This guy has pace to burn, and lot's of it. His pace, stamina and strength makes him a rather scary player to come up against. He is also a very good tackler and his positioning is fantastic. He has great concentration and is also very influential. He is a very determined person and will work very hard for the team. Unfortunately he is not very technically gifted but just like with Susnic and Gilhaney, that can be worked upon when/if they sign for Vauxhall. Karim would be a fantastic inquisition for us, although he could be quite costly. 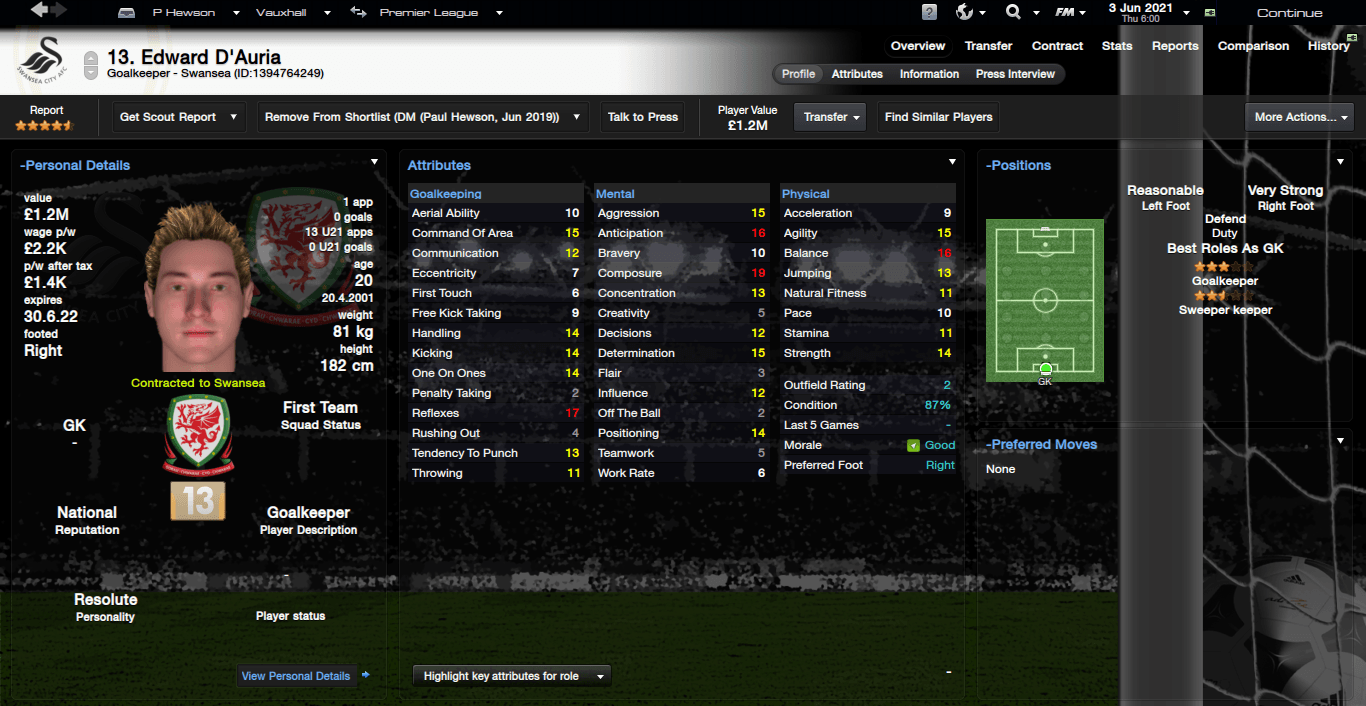 One of the hottest goalkeeping prospects in the world. Edward D'Auria has already become Swansea's starting keeper, and he also has a cap for Wales. He is a little on the short side, but more than makes up for it with his great composure and positioning. He is a wonderful shot stopper and is a good kicker too. If we can get our two goalkeeping targets, Simon Moore would be a great tutor for Edward D'Auria to develop him to the next level. Edward would probably become our best goalkeeper and would be the best signing we could possibly make in this transfer window.

JT: "So we're looking at spending anywhere from £18M to £27M. That is rather steep, if I'm honest gentlemen. Okay, I'll see what I can do to make these transfers happen and for as cheap as possible. In the mean time, please ready your list for the Prospects meeting tomorrow."
Login to Quote

Neal
9 years
Some nice looking targets there that could really help Vauxhall, hopefully you can sign them all without a problem
Login to Quote

Glenn T
9 years
D'Auria looks amazing and so does his name! Sign him up!
Login to Quote


Yeah, hopefully I won't have to overspend on any of them


He's the next De Gea, of course I'll sign him up!
Login to Quote

Caelis
9 years
good luck on the signings and good luck on building the team further
do not forget to scout Belgium :-p
Login to Quote


Yeah, they're all good prospects


How could I ever forget to scout Belgium?

quality keeper on Fm and in real life! good luck for the season ahead

quality keeper on Fm and in real life! good luck for the season ahead

Well I haven't signed them yet but hopefully I will soon

GM: "Good, good. I've got the youth prospect list from the scouting network along with reports on each player here for you, Paul."

PH: "Good stuff, but we have one small problem. James (Talbut) called me earlier and our transfer targets for the first team will cost us £36M rather than the £25M that we hoped it would. This means we have a lot less money to spend on youth prospects than we had hoped. Even so, we should have the first team targets signing up for us soon and James is personally travelling to London to meet with some of the players' agents."

GM: "Ah okay. Well I have eleven names here, and they do have some good potential. I suppose we should just spend what we have to get as many talents as possible in to our youth squad. Our academy team is very poor at this moment so we need to do what we can to strengthen that up."

PH: "I completely agree with what you said there and I think we really do need to strengthen our squad. So, show us the list and reports and we will see what can we do."


GM: "I think that if the clubs want more than the estimated fee, we should not pursue that player any further. The players who I think we should definitely go for at the start are Manzella, Fırat, González and Peña."

PH: "Okay, let's have a look at the reports and then see who we can sign." 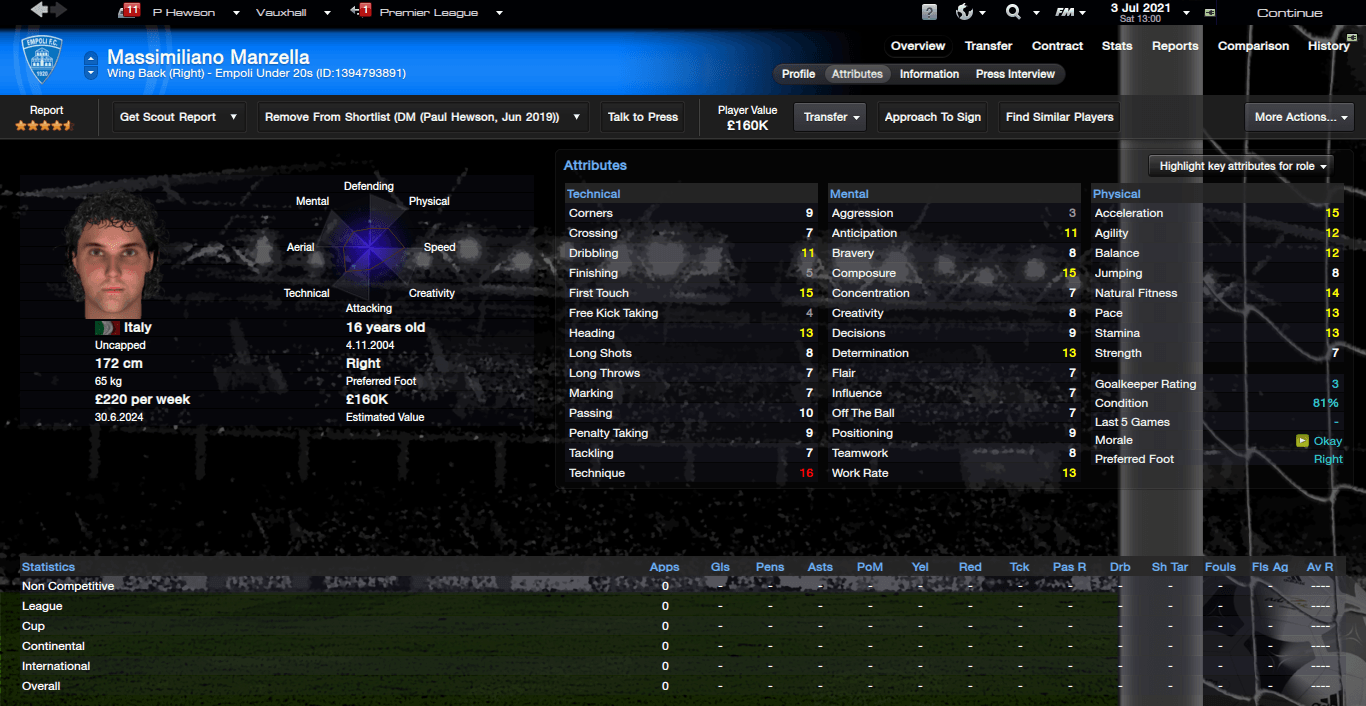 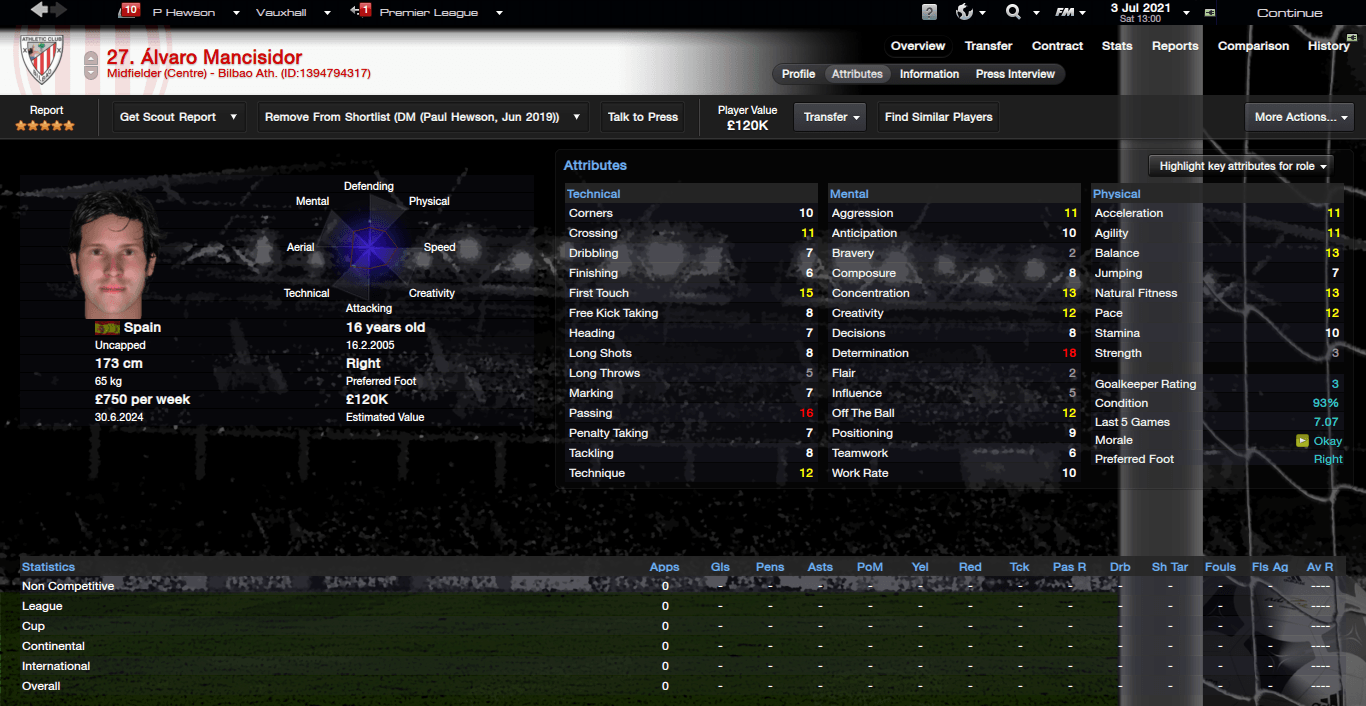 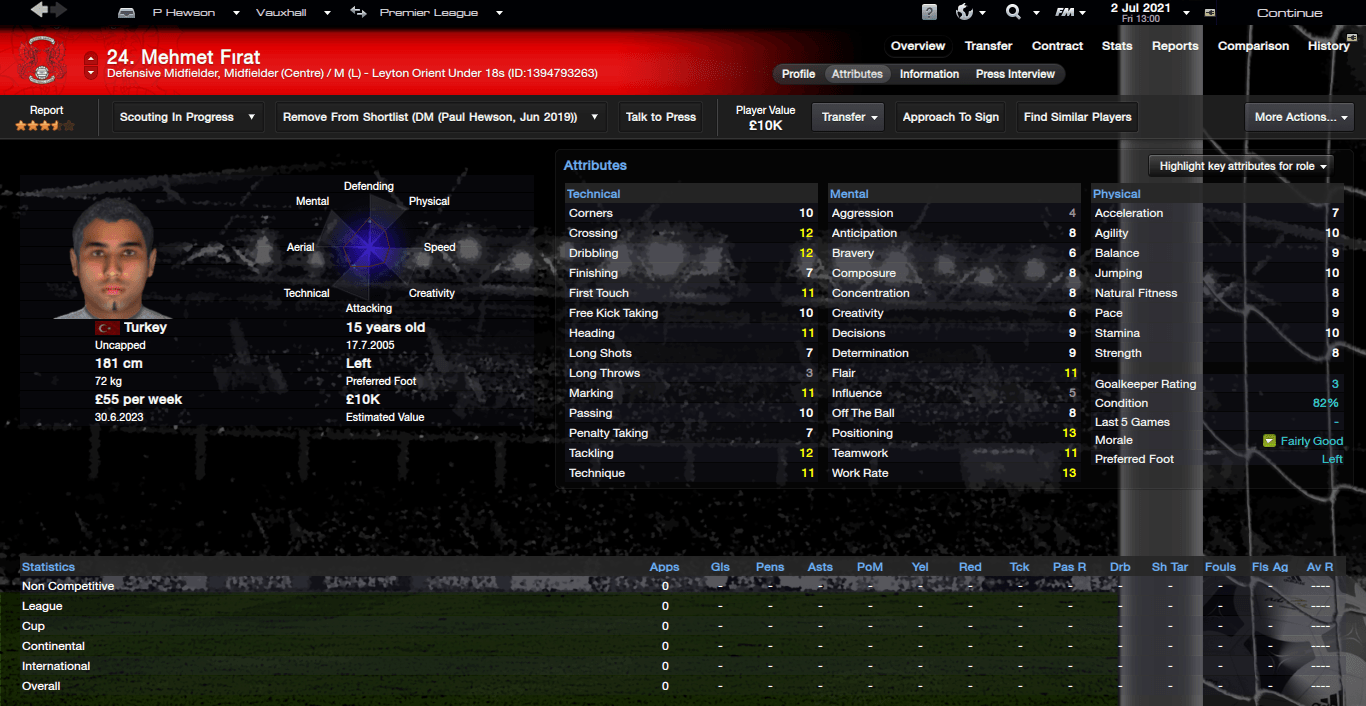 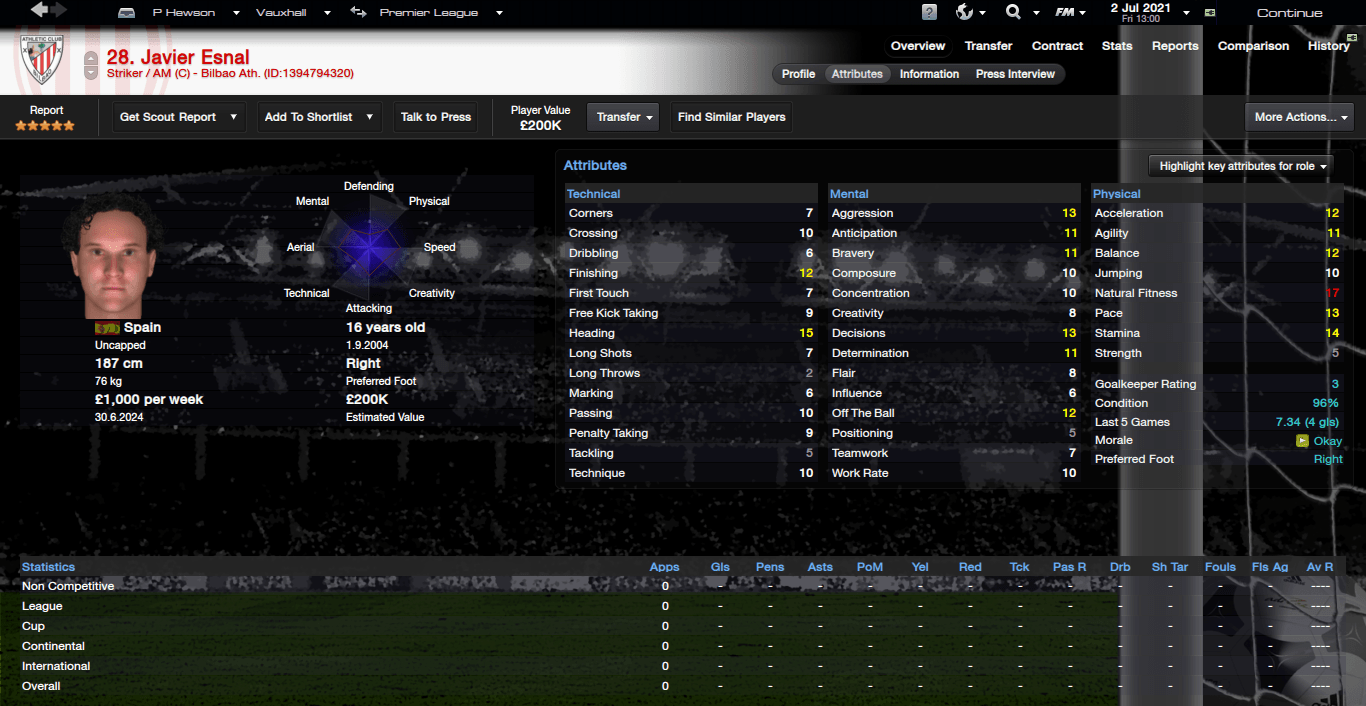 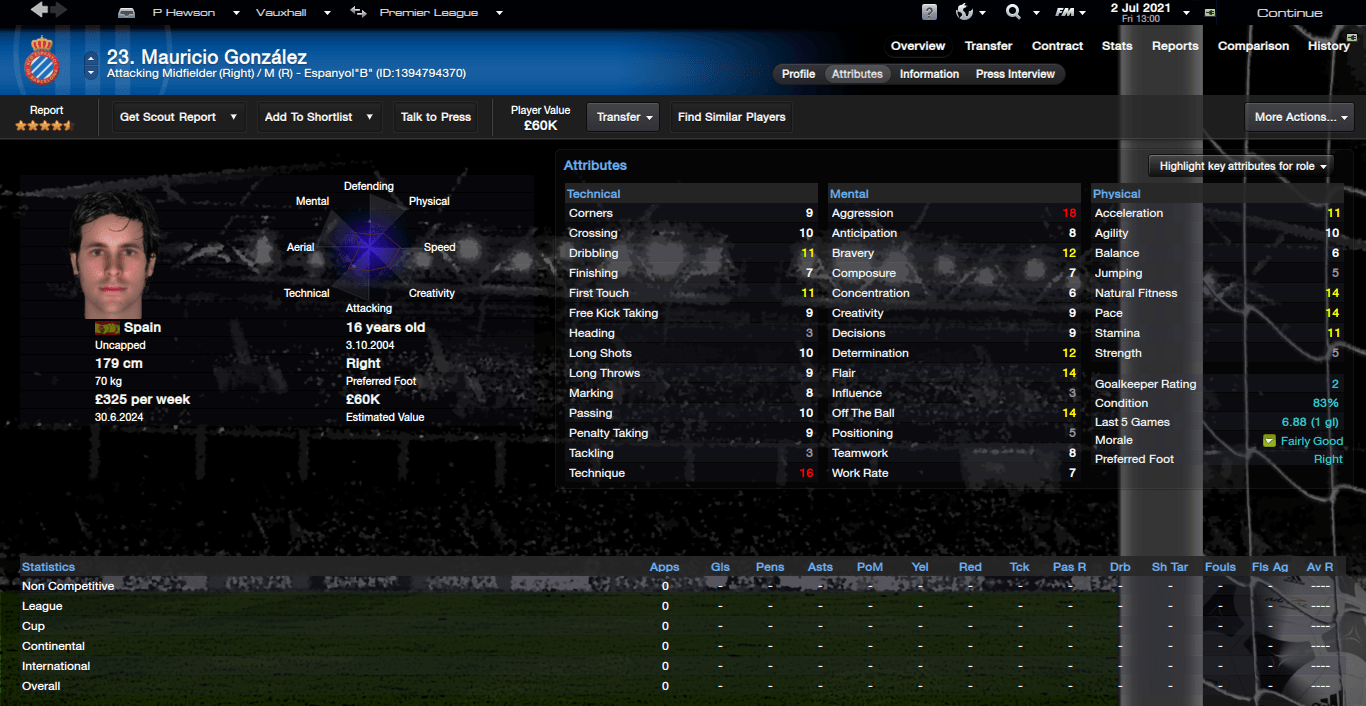 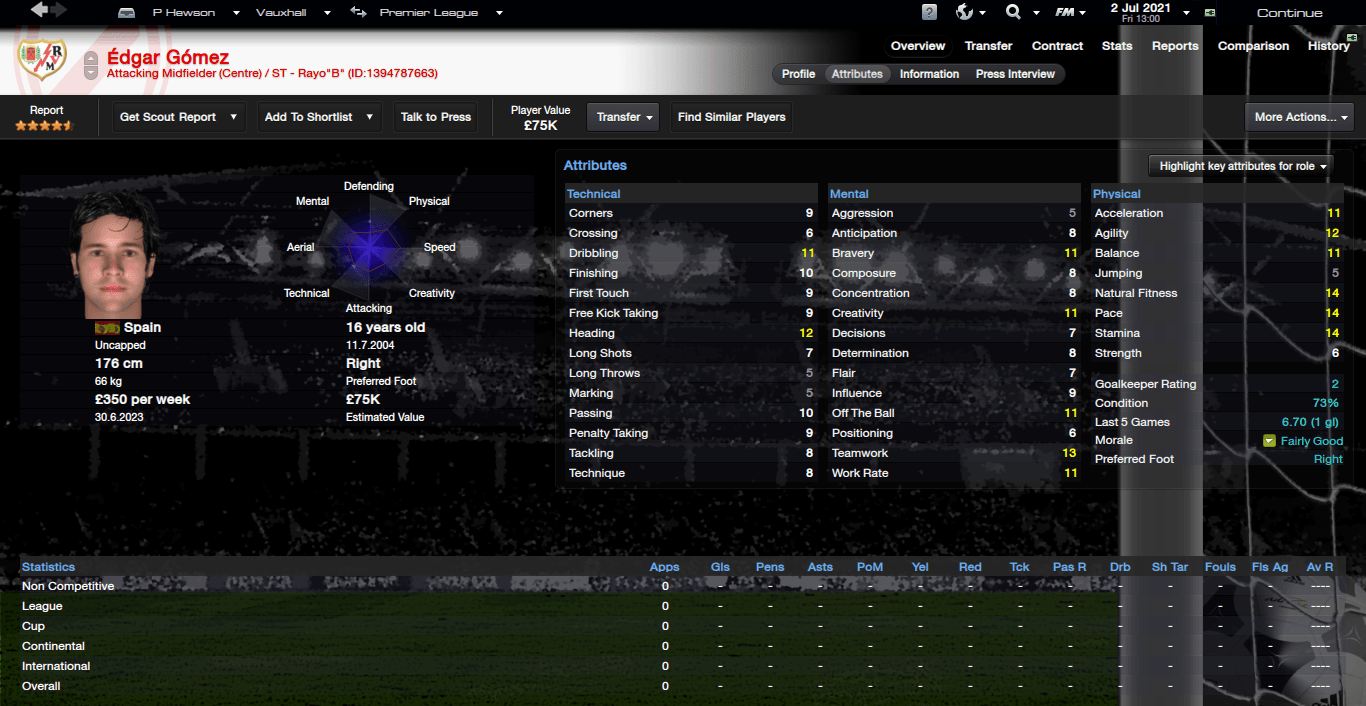 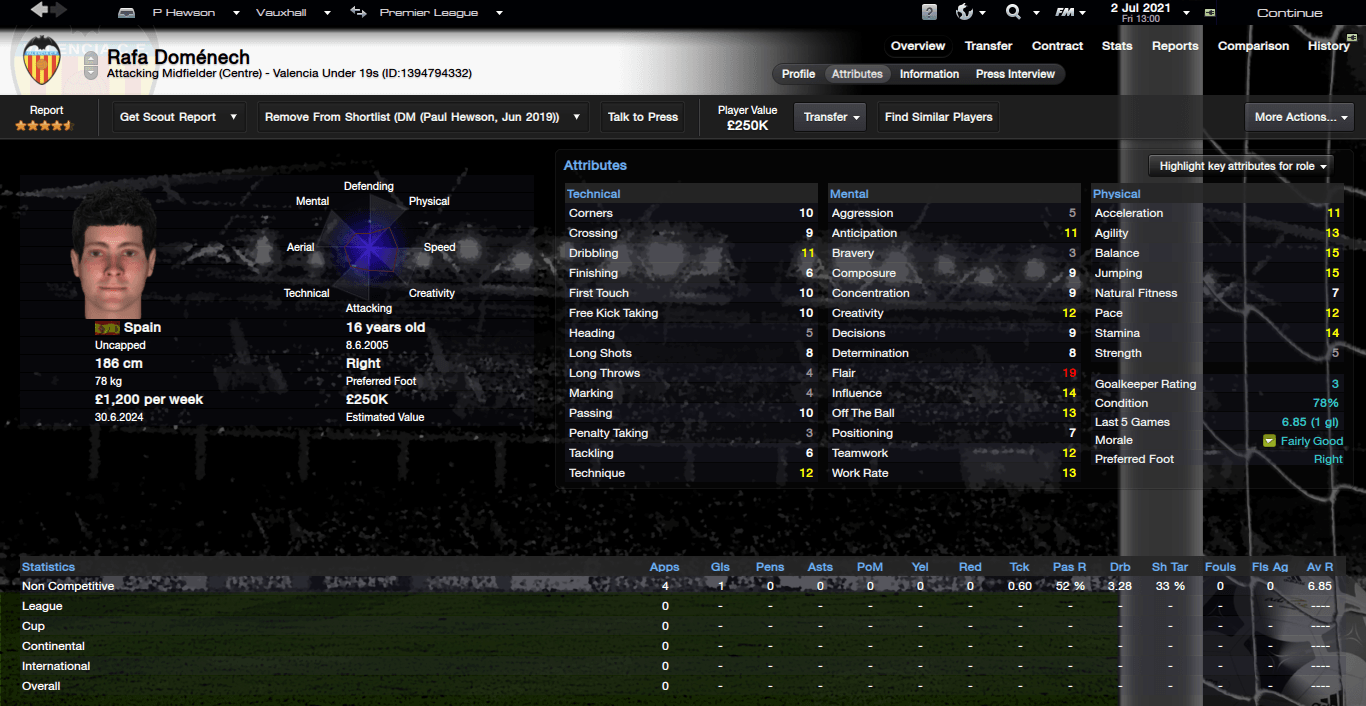 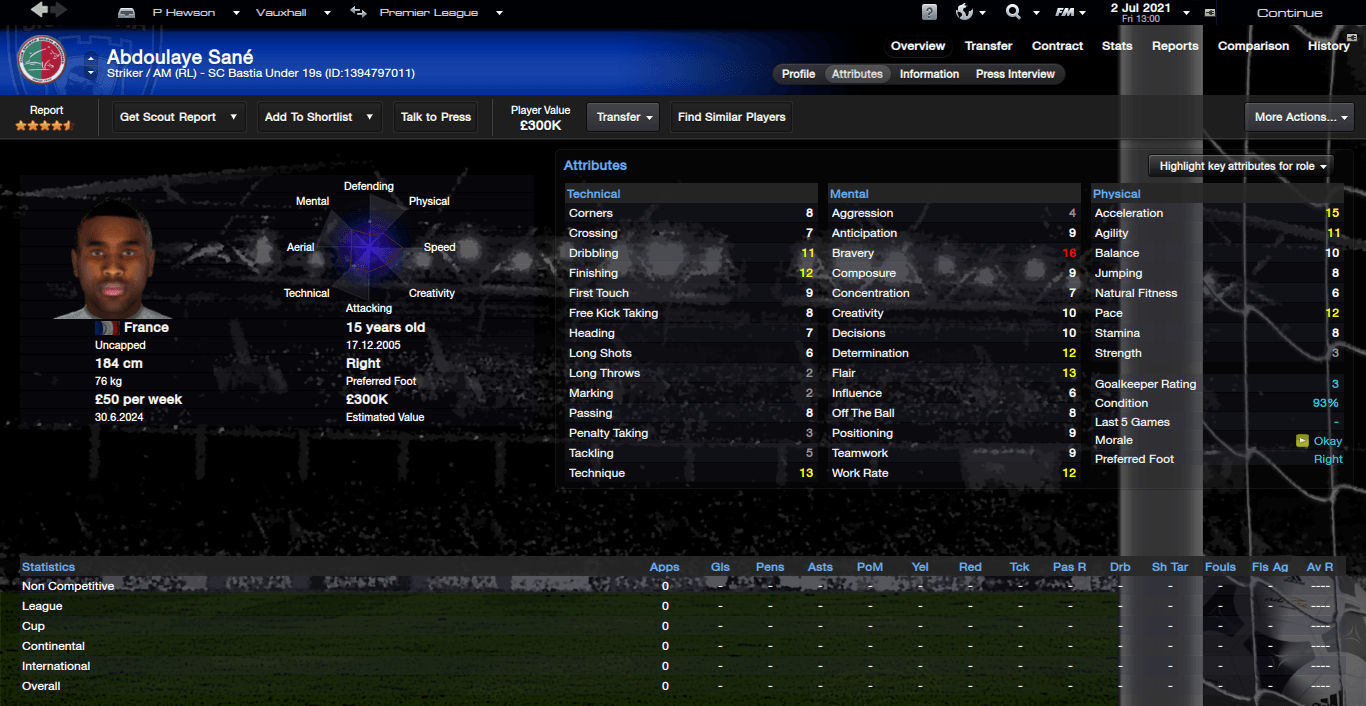 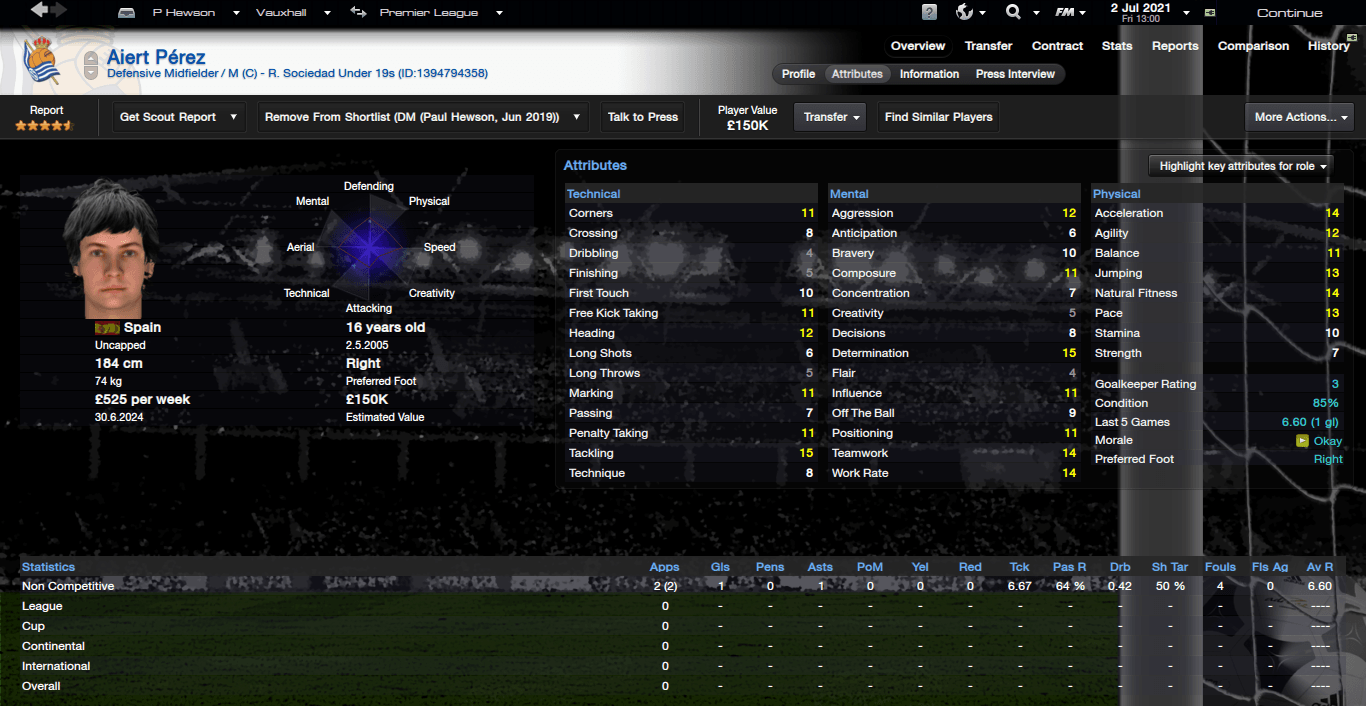 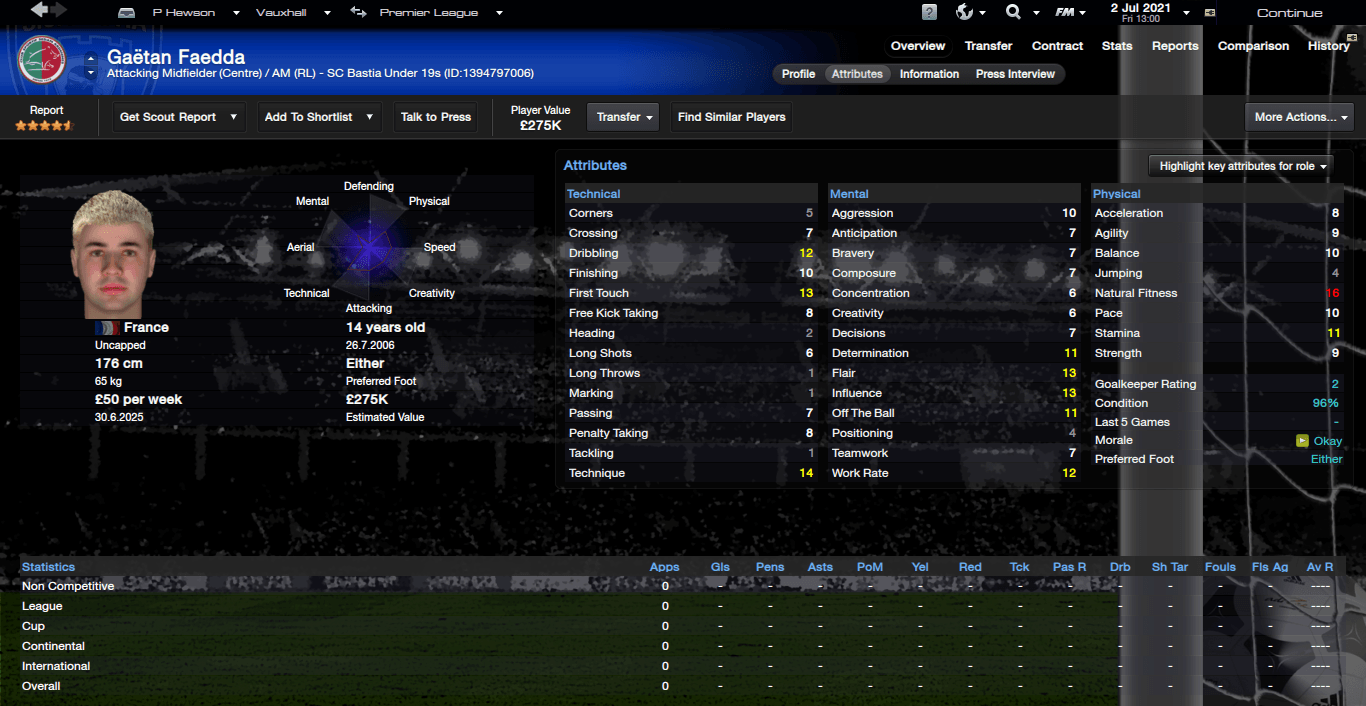 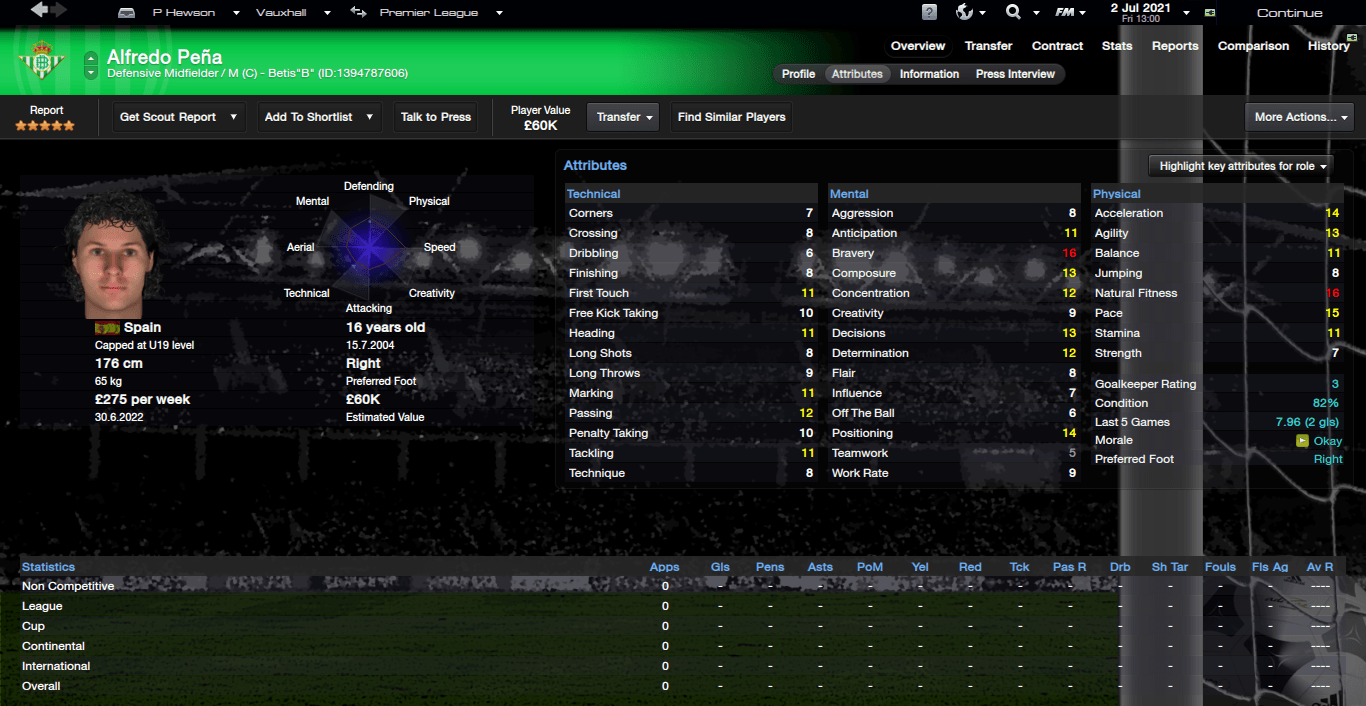