An amazing five Manchester United players have been named as Candidates for the 2012 World Golden Ball Award. Robin van Persie, Robert Lewandowski, Nemanja Vidic, Wayne Rooney and Rio Ferdinand have all been nominated for the World Golden Ball award. Many fans around the world would expect to see the likes of van Persie, Rooney and Vidic on there, but many fans are shocked, but happy, to see Lewandowski and Ferdinand up there.

Due to Lewandowski's recent mega move to Manchester United, many thought it would take time for the German to settle in, but he has proven them all wrong with 12 goals and 7 assists in 18 games for the reds. Meanwhile, Ferdinand was being questioned about his fitness a few seasons ago, and whether he was at the standard to play, but has had an exceptional start to the season, getting him a place on the shortlist.

Real Madrid have the most players on the list, with no less than seven squad members being nominated for the award. However, it is Barcelona magician Lionel Messi who is favourite to win the award. Other stars tipped for success include Cristiano Ronaldo, Neymar, Yaya Toure, Mario Gomez and Xavi, all favoured by many to win the award. Robert Lewandowski is also included in the list of the favourites to win, being placed at 5/1 to win the award.

The award is voted for by managers around the world. Each manager gets three votes, one worth 5 points, one worth 3 points and one worth just 1 point. Managers are not permitted to vote for their own players, but can vote for anyone else. This year the list features 35 of the best players in the world, with the winner being announced later in December, next month.
Login to Quote

BeanyUnited
9 years
Hopefully one of ours win it!
Login to Quote

Blue
9 years
How does Ferdinand get on there?

Blue: He's had a blistering start to the season. Someone Kompany got on it!

Jer
9 years
Wow, Devil this story is awesome in every aspect, you totally deserve it. 1250th post for you

XD I was about to ask the same thing hahaha

On another note awesome updates there Devil. Good results in November and a couple of nice updates on Wilson and Golden Ball. I've tried using Wilson in a previous save and he ends up as a player to increase squad depth and add to home-grown players. Hopefully you get more out of him

Jozef
9 years
FERDINAND? What is happening to our world?
Login to Quote

EDIT: Notice how I said 1251th rather than 1251st. I'm so dumb. And notice how I am so lazy I only edited this one, not any of the others

Pauker: Thanks so much, I'm honoured!

k1rups: If anyone finds out I will use them in an awesome update!

Thanks buddy, I hope I can get the best out of Wilson, or at least make a little bit of money out of him!

The Special one: I thought the same thing. Somehow he's been class this season. When I compared form with all the contenders, he's second best, 0.03 behind Messi! Unreal! 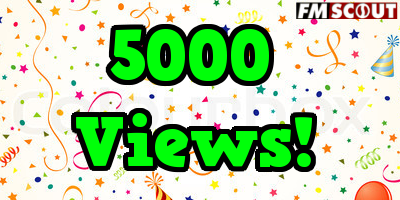 I can't believe how quickly this happened, I must had had about 600 views over night, it's brilliant! Thanks to everyone who has read, or even clicked on my story, you're the ones who make it great. 10,000 here we come!
Login to Quote