shylax
9 years
I thought we played very well throughout all that, but you know, USMNT-quality finishing and random lapses in defense. I'm really excited that they did come out and play when their backs were to the wall.
Login to Quote

Deleted
9 years
Enjoying it so far but it would be nice to see some call-up drama if you know what I mean? Some news article style of who is in or out of the USMNT. Keep it up though
Login to Quote

shylax
9 years
I'll try to do that, I thought it might be too hectic to do that each time but I don't have to send in squad sheets that often so I'll give it a shot.

Notes:
- Brad Guzan, Clint Dempsey, and Mikkel Diskerud are notable omissions due to injury
- Fabian Johnson isn't in the best of form, and the media is decrying that pick, but I pick the best players for my squads.
- Michael Bradley is out due to a fitness squeeze, and has no complaints about the decision to leave him out.
- Big controversies are Ream over Bocanegra and Chandler over Cherundolo.

A popular rumor over the past few weeks is that United States manager Nathan Limior is in the mix for several Ligue 2 and even a Ligue 1 job, but Limior said his sole focus was on the 2014 World Cup. "I rejected a job offer from Girondins Bordeaux because I am that focused on my duties as an international manager. I am a servant to US Soccer, and I might reconsider after the 2014 World Cup, but for now, I am not managing any clubs."
Login to Quote

It might have been an expected victory beforehand by the media, but the United States squad showed great character in winning on the road in Scotland and coming back from an early goal deficit created by a penalty kick. Maurice Edu committed the foul which gave Scotland the penalty, the goal, and the early lead. However, Chris Wondolowski was on form today, scoring two goals, the first on a diving header and the second after a great long pass from Tim Howard which created a one on one with the Scottish goalkeeper. Other than the penalty, the American defense had a great game, only allowing 8 shots and 1 on target for the game. The American fans were jubilant over their team's victory and hope it creates a springboard for them in the CONCACAF Hexagonal. 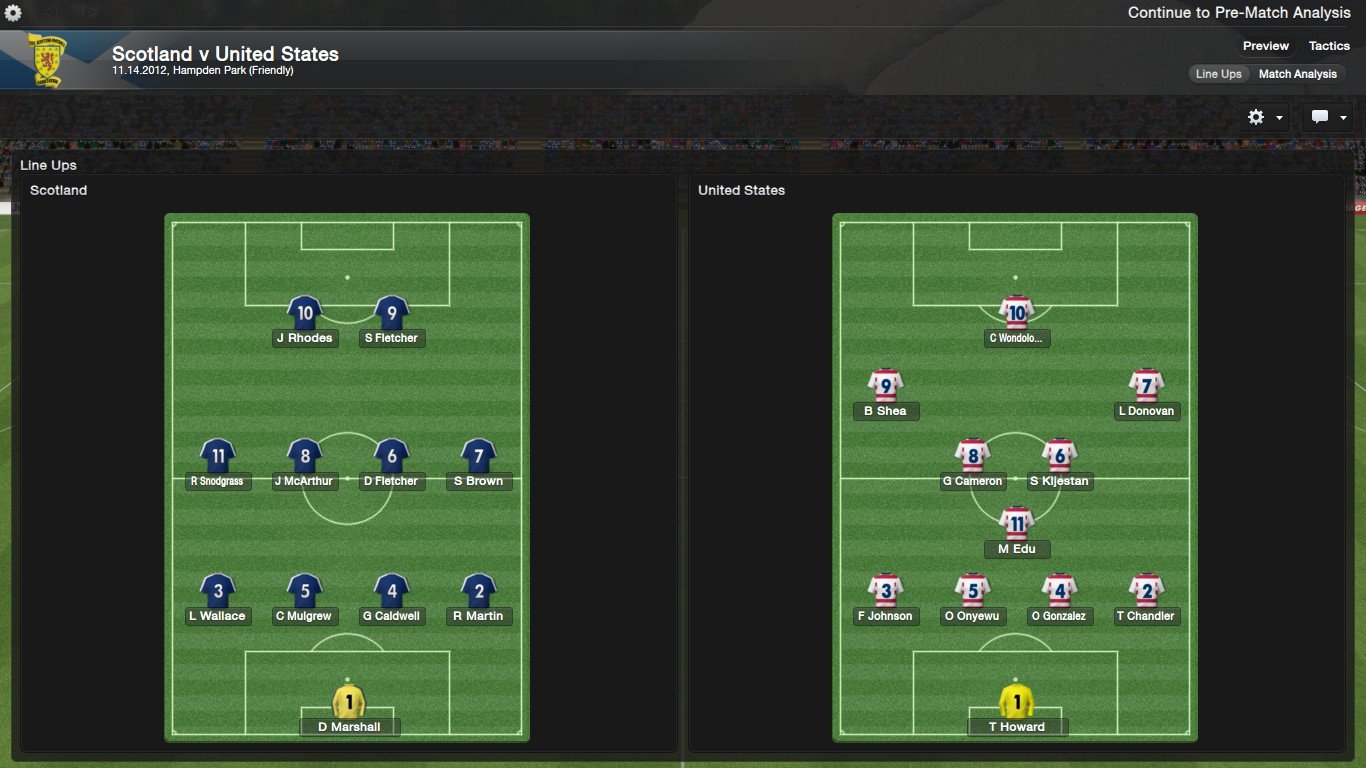 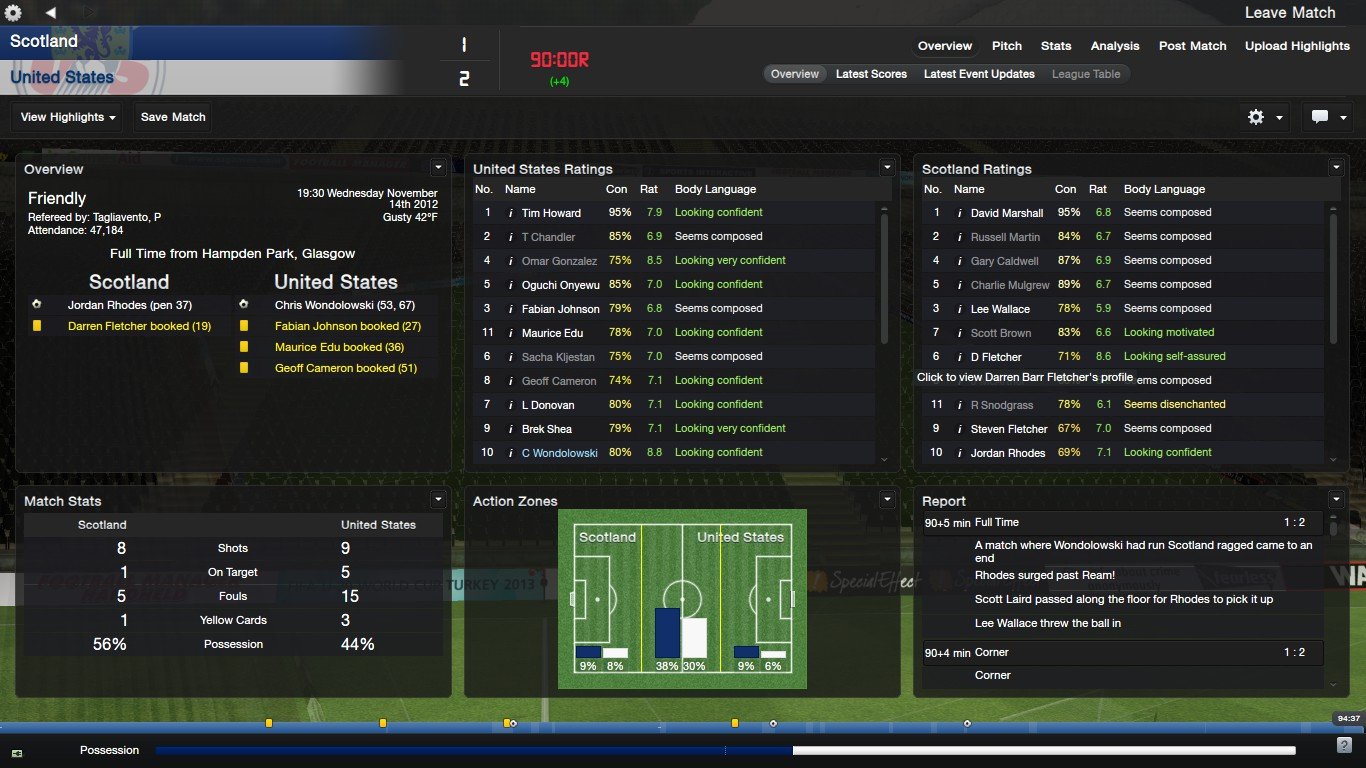 Okikos
9 years
Good win, good luck for the rest of the campaign too!

Italian Serie A club Inter offered Nathan Limior a contract, reportedly five years, $46,000 a week, but Limior once again rejected the suitor, citing his focus on the World Cup preparation. His insistence is sure to not keep teams from trying to get them with their club, as he is seemingly a hot ticket despite his inexperience in helming a team.
Login to Quote

93:20
9 years
Love the story, easy and quick to follow. Not the best so far results wise but you will pull through and hopefully make the World Cup.
1
Login to Quote 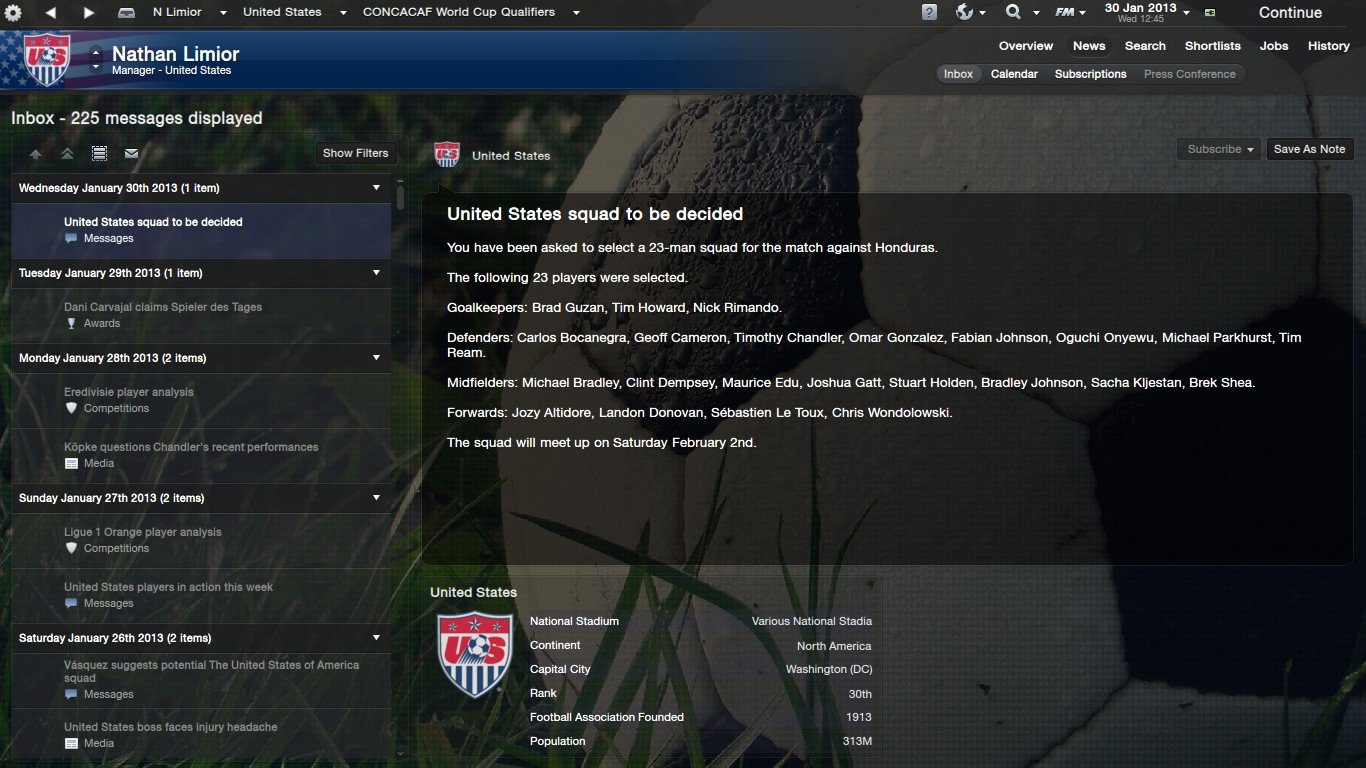 - Guzan, Dempsey, Bradley, and Bocanegra are back in the mix
- Garza and DaMarcus Beasley have had concerns about their international futures. Beasley is on the cusp of 100 caps, but with the way the squads have been lately he'll have to rely on on an injury to get there.
Login to Quote

A Disappointing Win is Still a Win for the US

Despite struggling against a weakened Honduras side who was left to 9 men due to poor discipline and an injury, the United States eked out a 1-0 victory over Honduras amidst the flares from passionate United States fans at Rio Tinto Stadium in Utah. Honduras' Nery Medina picked up his second yellow card in the 60th minute, and in the 71st minute, Jozy Altidore scored the winner from 21 yards. Wilson Palacios was forced off the pitch during injury time in the second half and Honduras was unable to field a replacement. In the other Hexagonal games, Costa Rica was able to come away with a huge 4-1 victory against Trinidad and Tobago, and Mexico dashed the hopes of Jamaica's fans as they won 2-1 in Kingston. 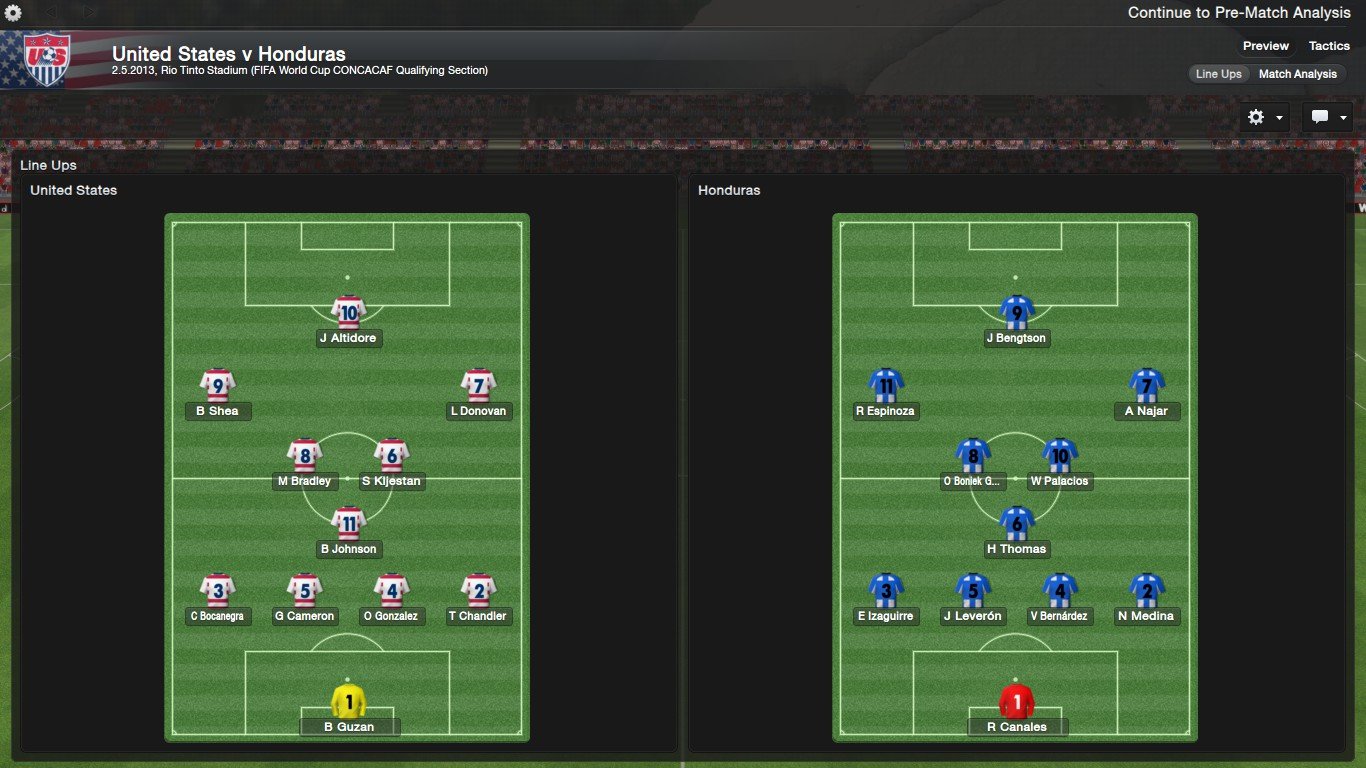 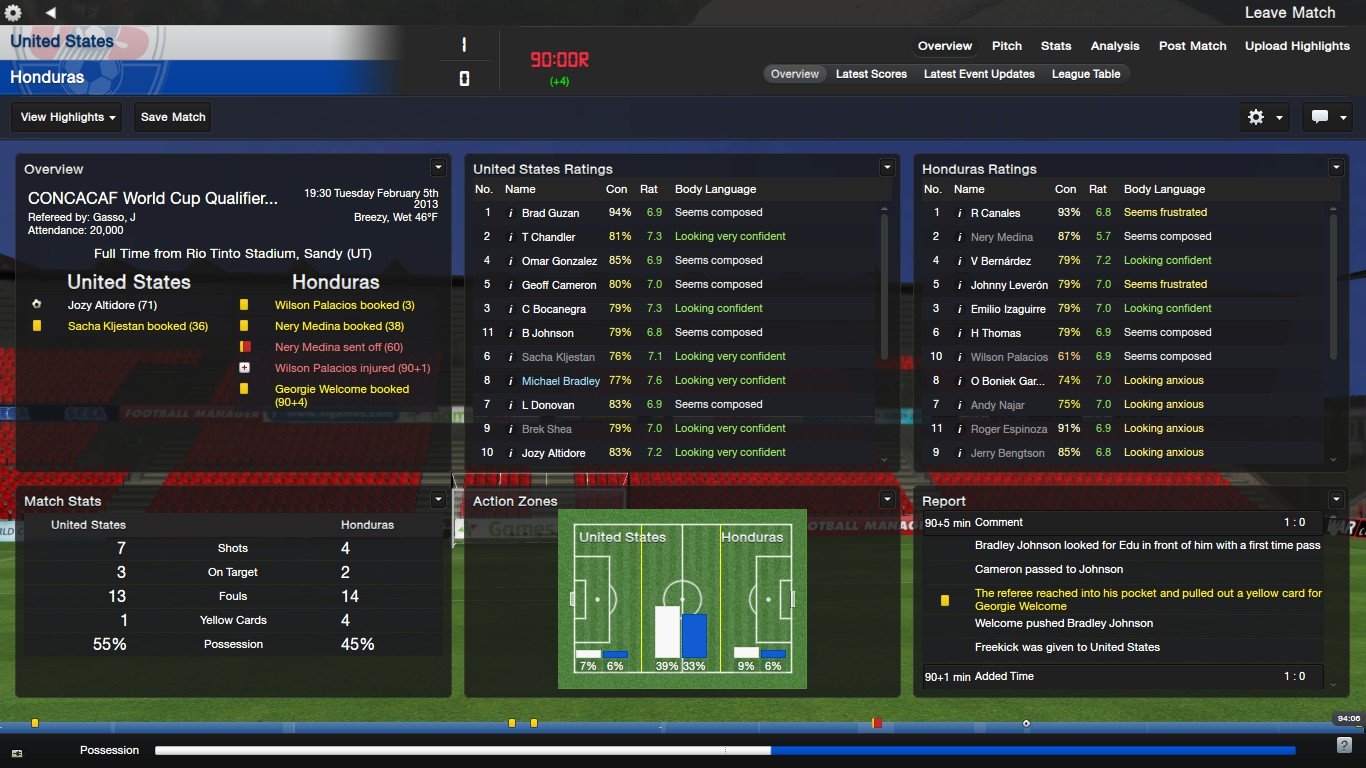 k1rups
9 years
Nice story so far keep it up. Looks like the team could be playing a bit better though
Login to Quote

The President of US Soccer, Sunil Gulati, was proud to announce today that the United States would be playing two friendlies in between Hexagonal qualification and the Gold Cup. The US will play Argentina on June 23rd, and then they will travel to Nigeria to play the Super Eagles on June 29th.
Login to Quote

US Squad Against Mexico and Costa Rica 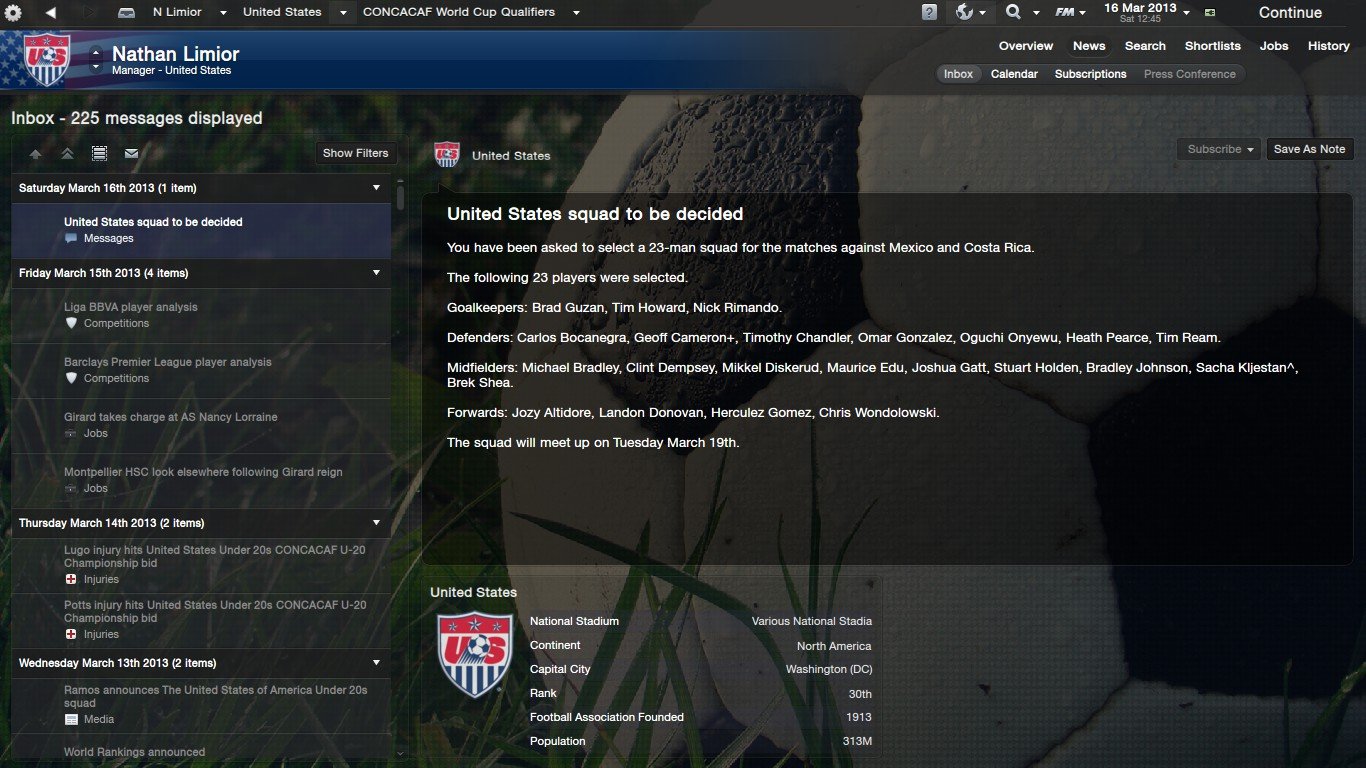 (The great thing about FM is that when you go to Azteca, Mexican fans don't throw urine at you and shine laser pointers at your face.)
Login to Quote

Nathan Limior has done an adequate job of coaching the United States national team so far, but he's been hearing various sniping in the media that his results could be better. Hopefully, after the United States' 3-1 win over Mexico at Estadio Azteca, the naysayers will shut up for a while. Jozy Altidore, Clint Dempsey, and Brek Shea were all on form for the United States, putting the screws to the Mexican defense and their offside trap. Hector Herrera pulled one back for Mexico but it was too little, too late. In other CONCACAF action, Costa Rica pulled a 2-2 draw out of Honduras, and Trinidad and Tobago utilized their home advantage in a 4-2 defeat of Jamaica. The United States is in sole possession of first in the group. 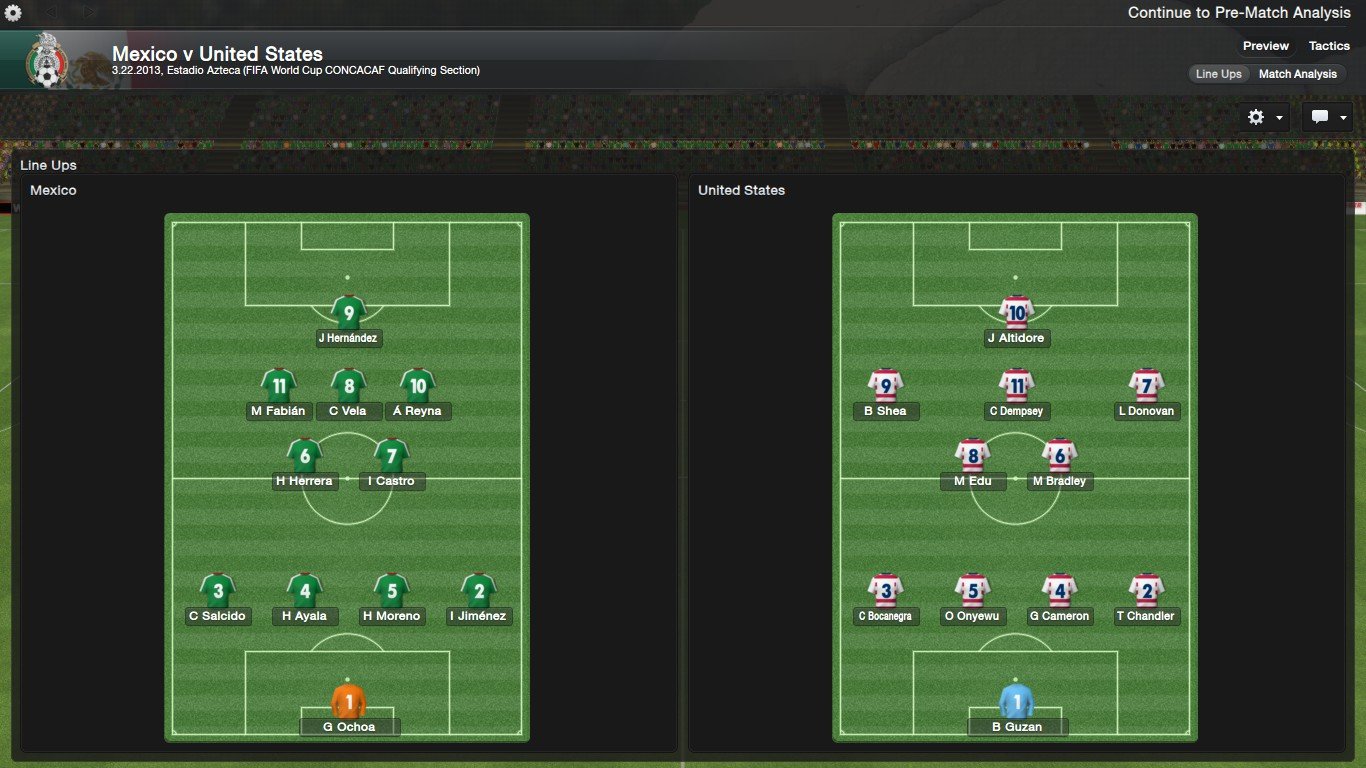 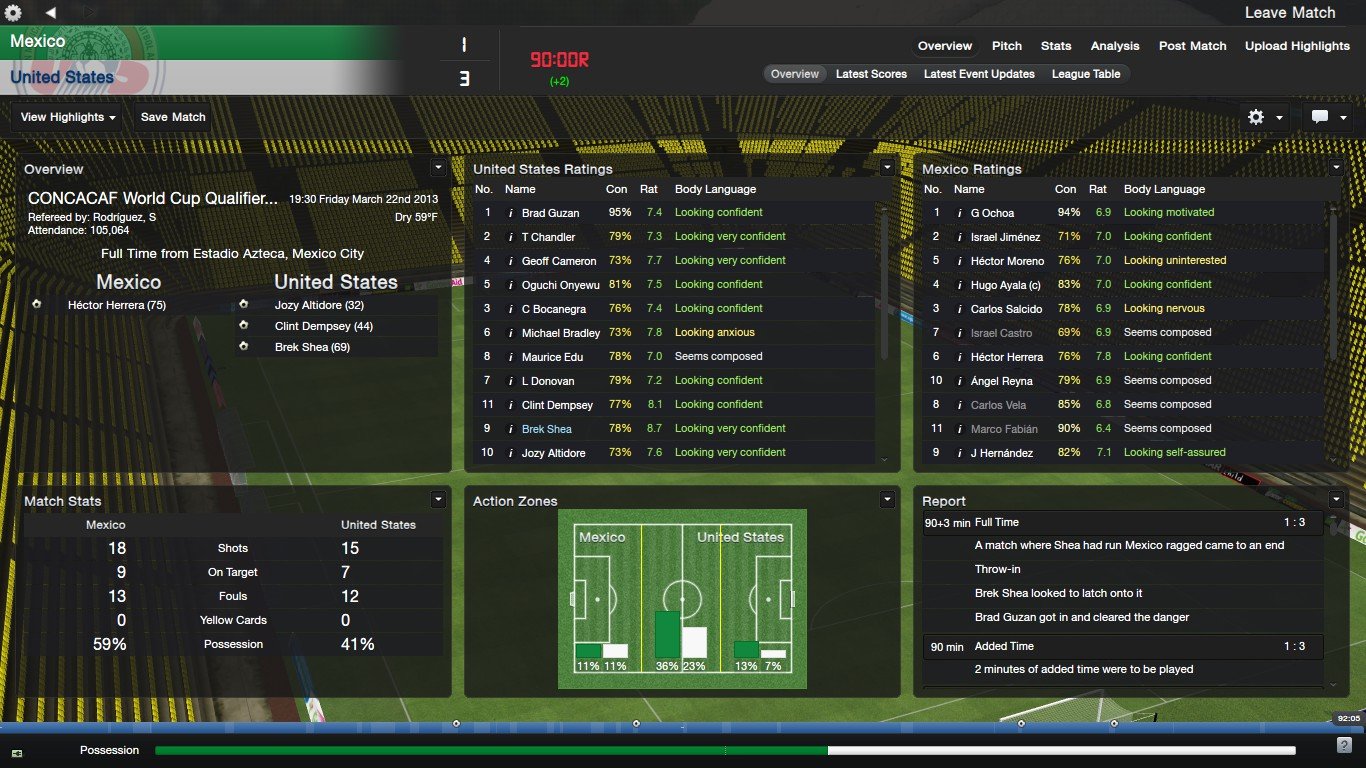