United States midfielder Mikkel Diskerud has fallen ill and will miss the next match against Costa Rica. Nathan Limior has called up Jermaine Jones as a replacement.
Login to Quote

Deleted
9 years
What a sweet win v the Mexicanos! Loved the comment in the previous post about the fans haha
1
Login to Quote

The US Dominates Costa Rica

The United States continue to roll along in World Cup qualifying, defeating Costa Rica 3-0 at Columbus Crew Stadium. Brek Shea had a goal but Landon Donovan really put the defense to the sword, scoring two goals. After the first half, the US cooled down but were still firmly in control. The US has 7 goals scored and only 1 goal conceded so far in the Hexagonal, although there are still seven matches left. In other matches, Honduras and Jamaica had a scoreless draw, and Mexico beat Trinidad and Tobago 2-1. 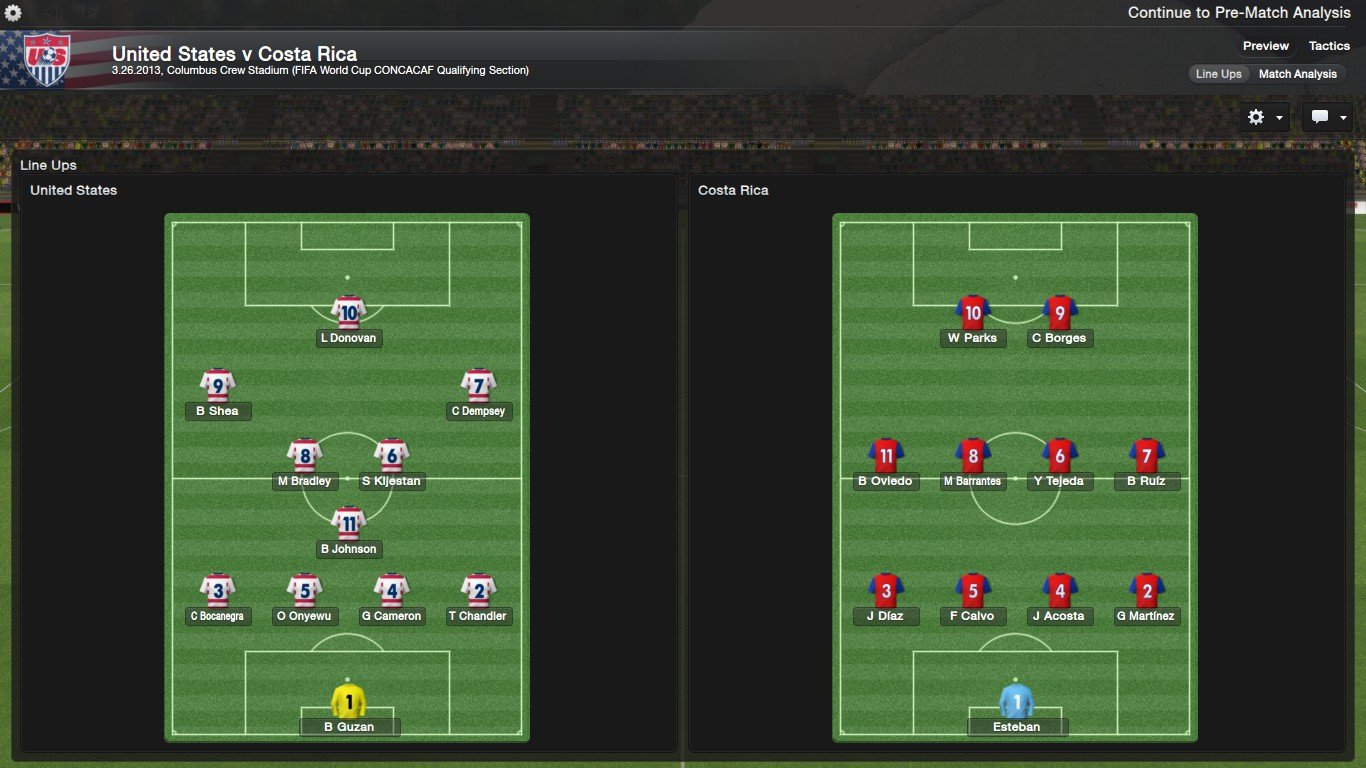 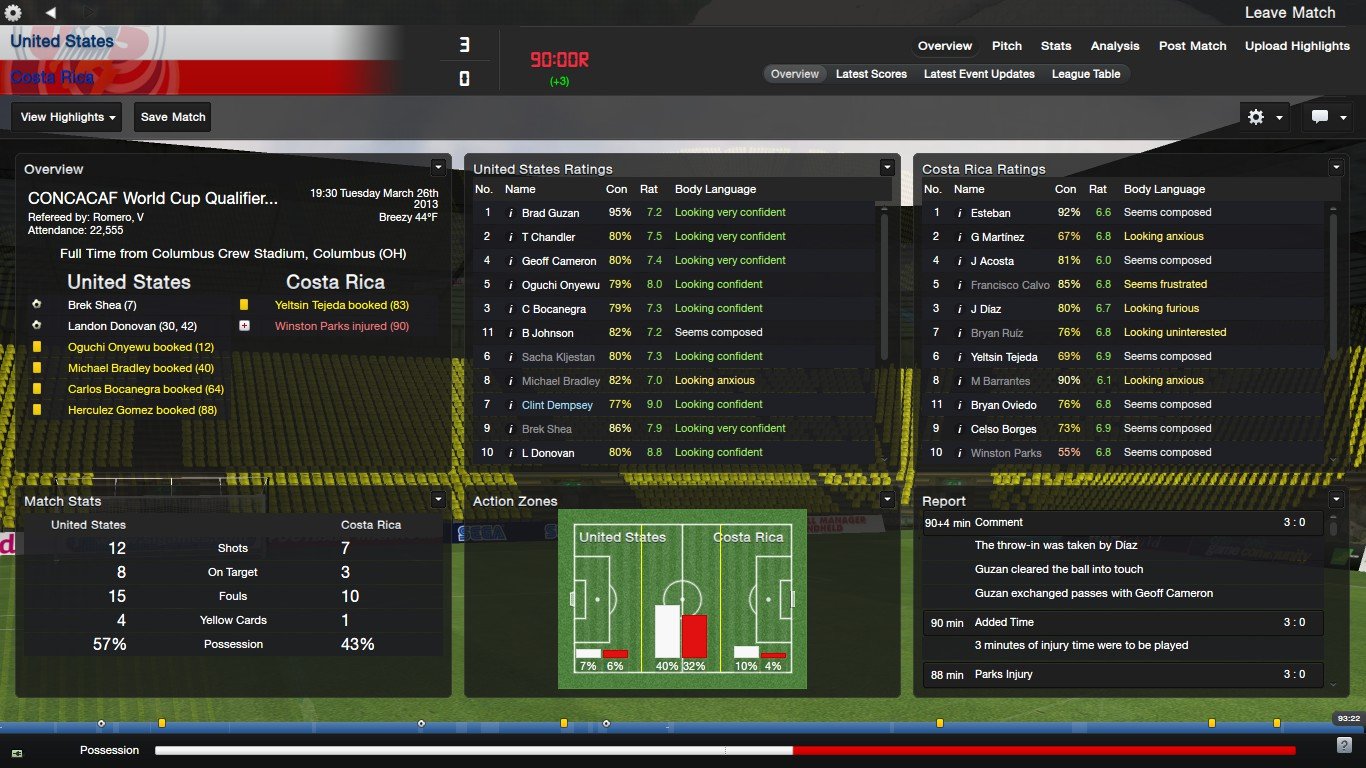 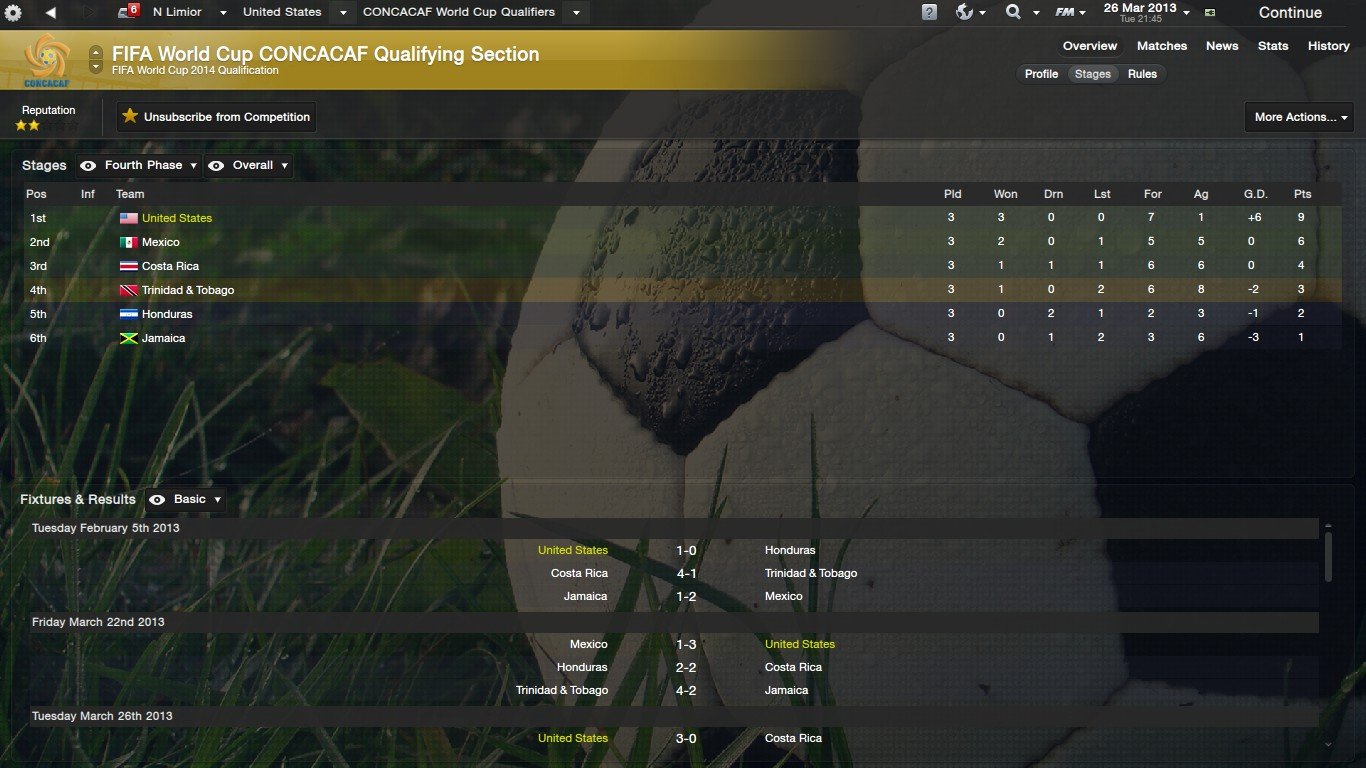 Here is the squad list for the United States' matches against Trinidad and Tobago, Honduras, and France: 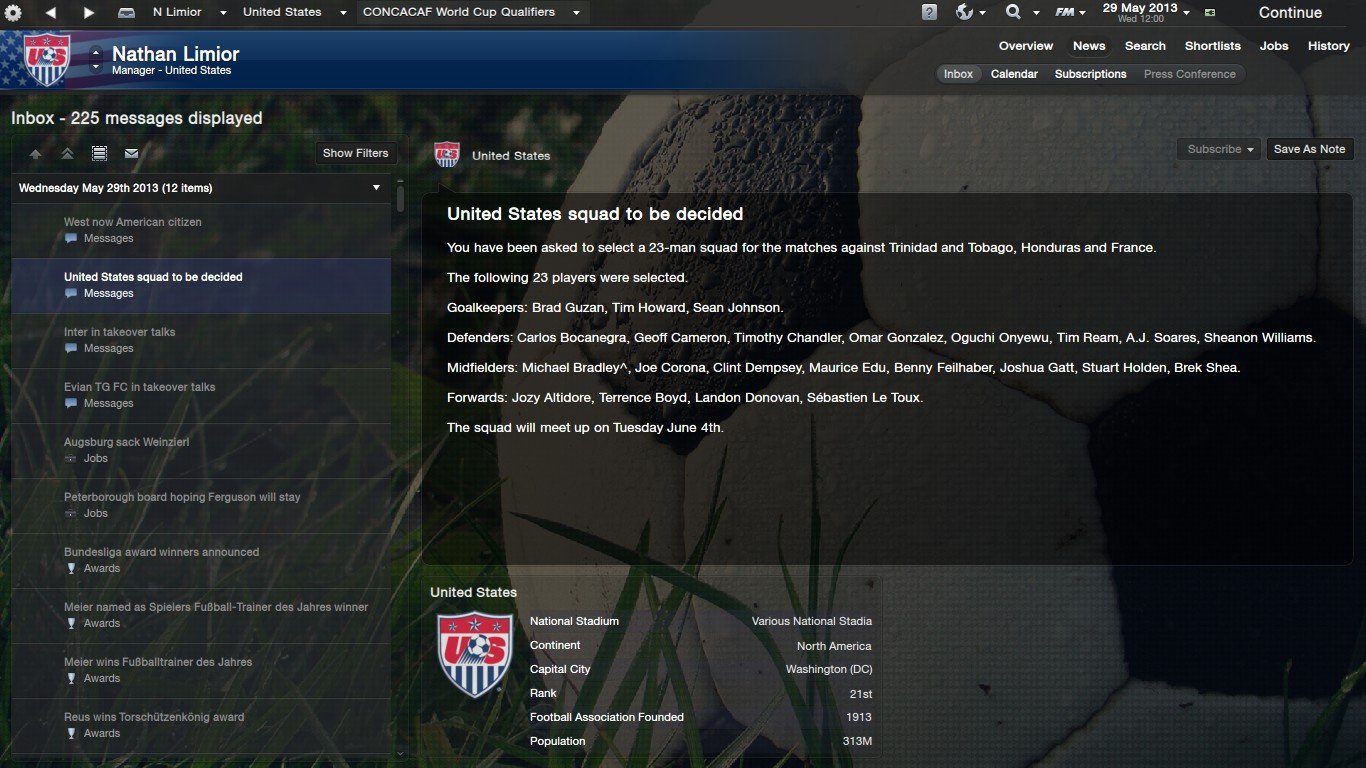 - Fabian Johnson missed out on the squad due to injury, this gives an opportunity to Sheanon Williams.
- Joe Corona enters the lineup for the first time, he was an overlooked talent but he will be great for us.
- The media is fickle, questioning the inclusion of Sean Johnson after relentlessly clamoring for his inclusion.
- Sacha Kljestan is a notable exclusion, but I feel he will be back sooner rather than later.
- Michael Parkhurst left out in the cold once again.
Login to Quote

Neal
9 years
Looks like a good squad, should be able to get some wins!
1
Login to Quote

Star American winger/striker Landon Donovan suffered a bruised head and will be unable to play against Trinidad and Tobago. Donovan's place in the spot has been replaced by Sacha Kljestan. The US fans are disappointed at this turn of news but are sure the US can get results without him.
Login to Quote

shylax
9 years
He hasn't really broken into the lineup much due to injury and illness, but I'm sure he'll be back in the fold soon enough since he's good at being an Advanced Playmaker, Kljestan is my first choice in that role, but I can see Diskerud getting some playing time in the future.

He DID score a goal in the friendly against Norway, though.
Login to Quote

The US, Perfect So Far

So far, the biggest surprise of the CONCACAF World Cup Qualifying is the perfect record of the United States team through 5 games. Only conceding 2 goals, and scoring 10, the US features an iron clad defense as well as an opportunistic attack. The US supporters have completely forgotten about Klinsmann, and have hailed Nathan Limior as the savior of US Soccer. The US need 10 points from the last 5 matches to win the group, and are sure to qualify long before then. Mexico is also a favorite to qualify, although wounded early and embarrassed at home by the US, they have beaten Jamaica 5-2 and are second in the table with 9 points. Costa Rica is in the third automatic qualifier spot. Honduras, Jamaica, and Trinidad and Tobago are in precarious situations, in danger of having to play a playoff for a World Cup spot, or not qualifying at all. 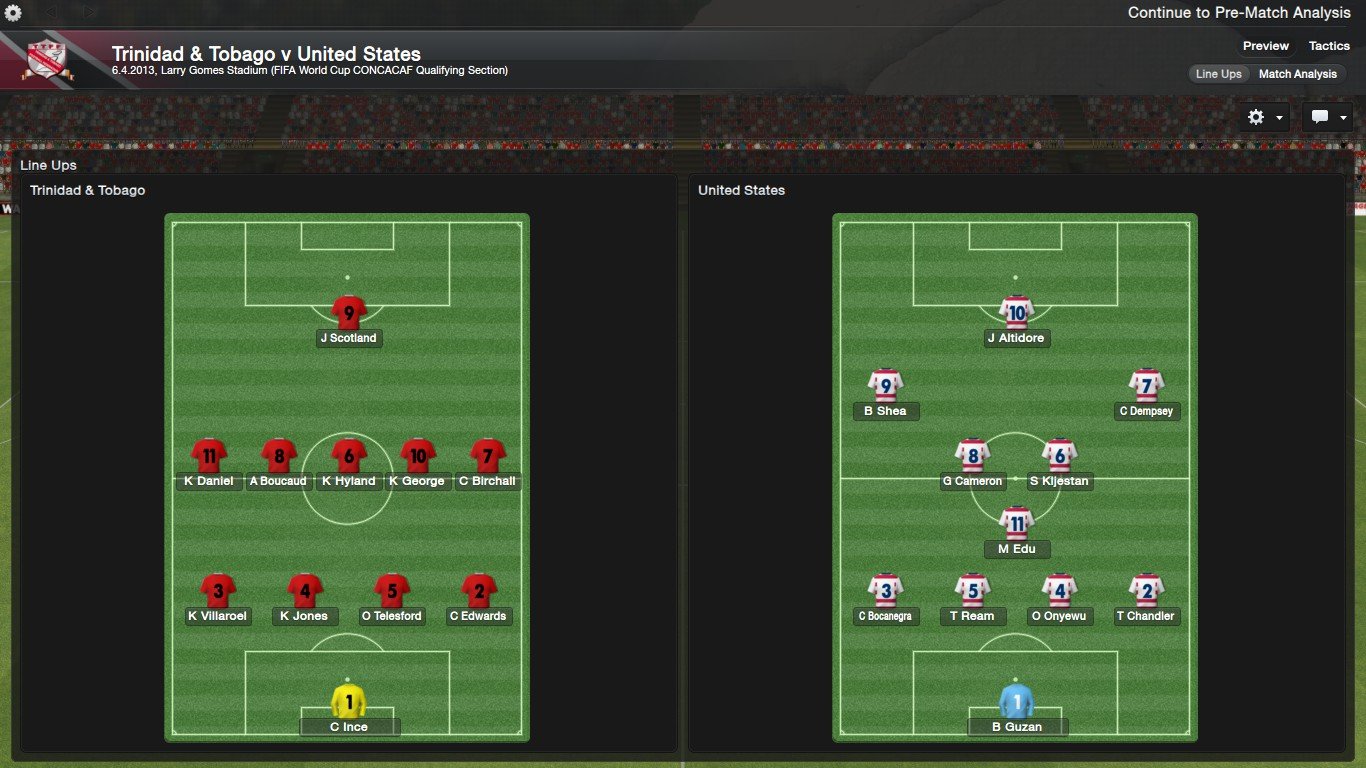 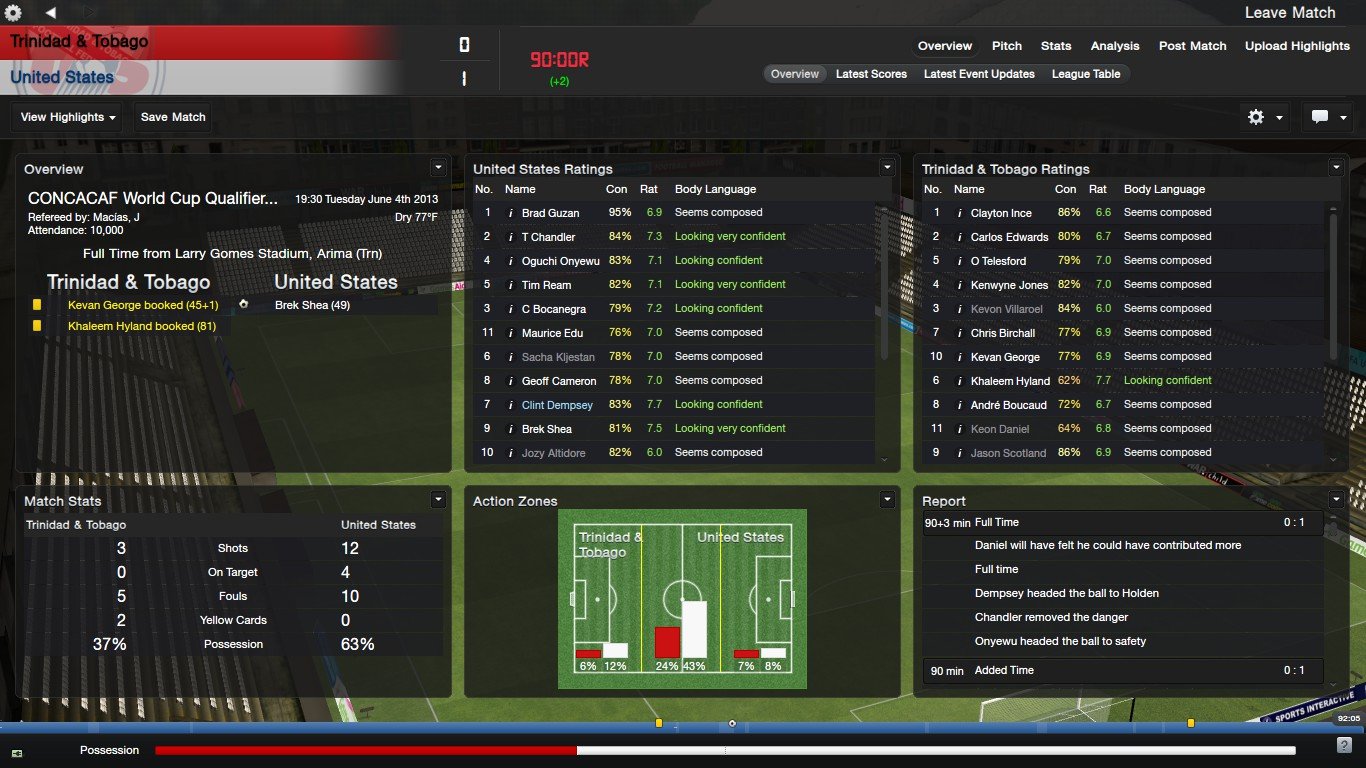 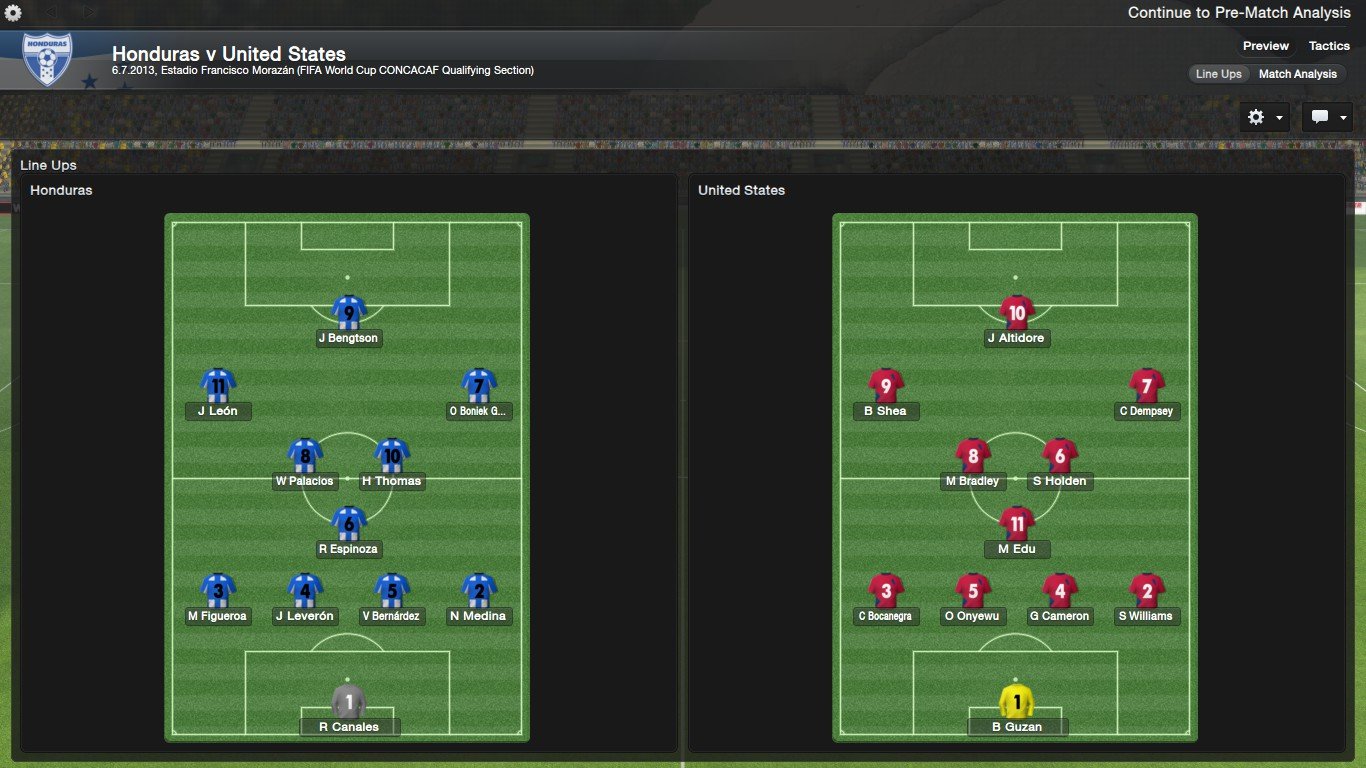 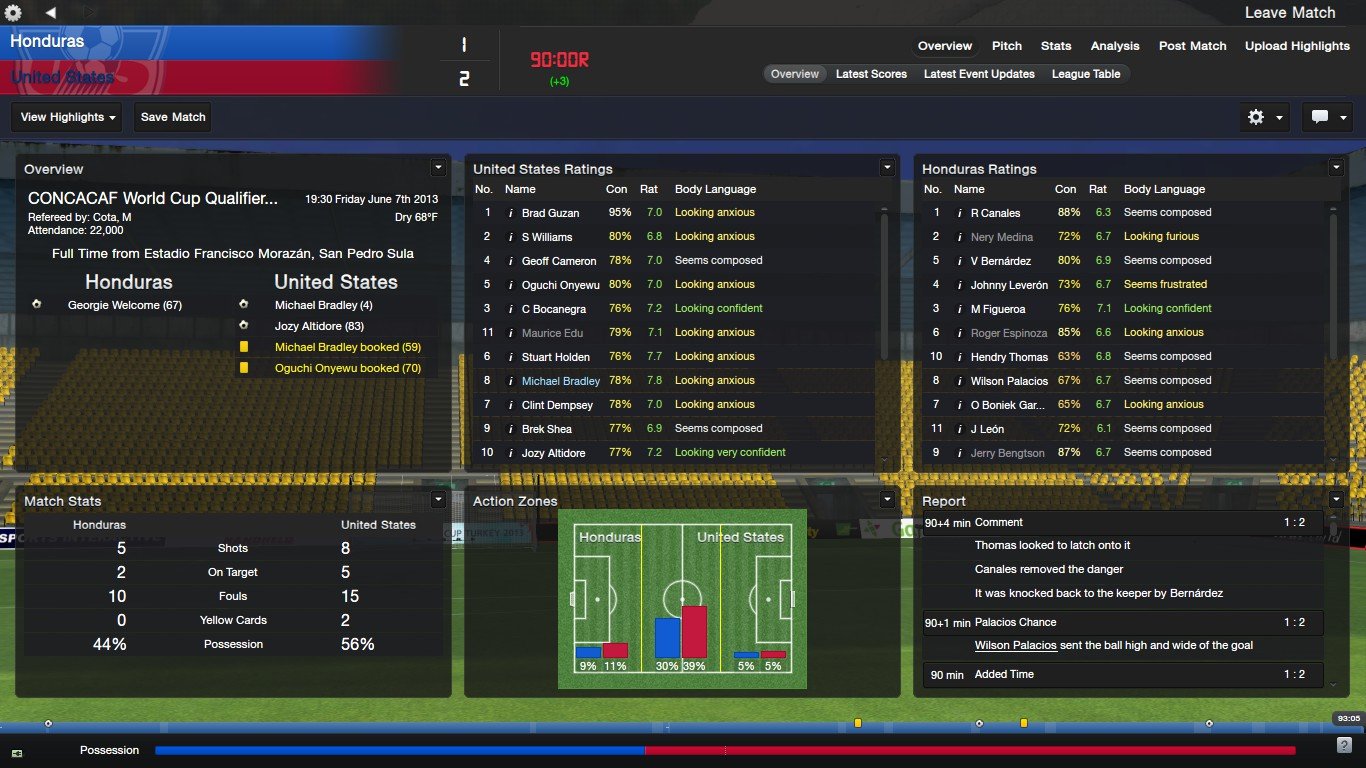 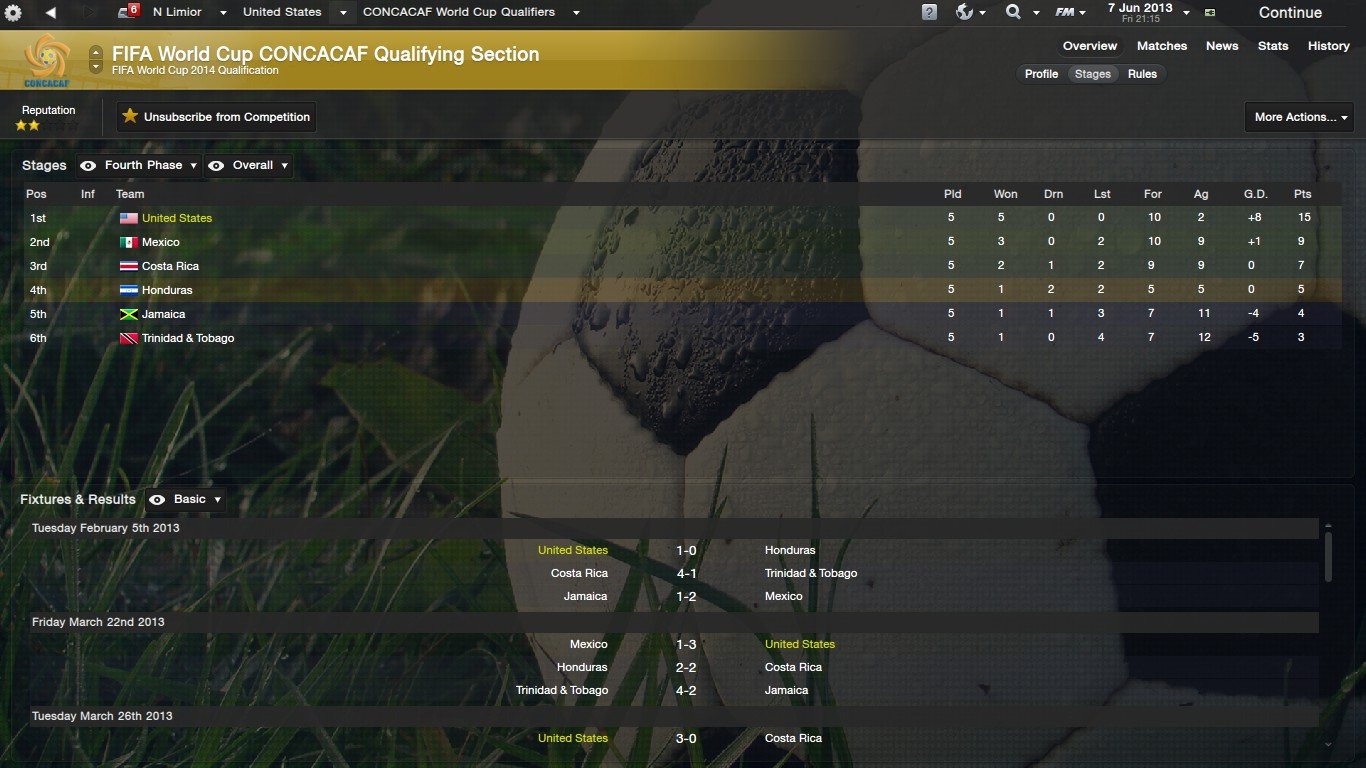 Neal
9 years
Nice results in qualifying mate, keep it up!
1
Login to Quote

Giroud's Class is the Difference

http://static.guim.co.uk/sys-images/Football/Pix/pictures/2012/6/12/1339491946934/Olivier-Giroud-is-thought-008.jpg
The United States' incredible seven game winning streak has been snapped, but it is no shame to have come in such a close-fought battle against France. Although France had the pick of the chances, and Olivier Giroud's amazing goal early on to get the lead, France struggled to bury the United States, and the US team came close to creating an equalizer. Nathan Limior was quoted as saying "I can easily see this being a Round of 16 or Quarterfinal matchup in the World Cup. We kept it close, but we still have a lot of work to do, but I know that on another day, and on a neutral field instead of in France, we have a shot of stealing one from France." 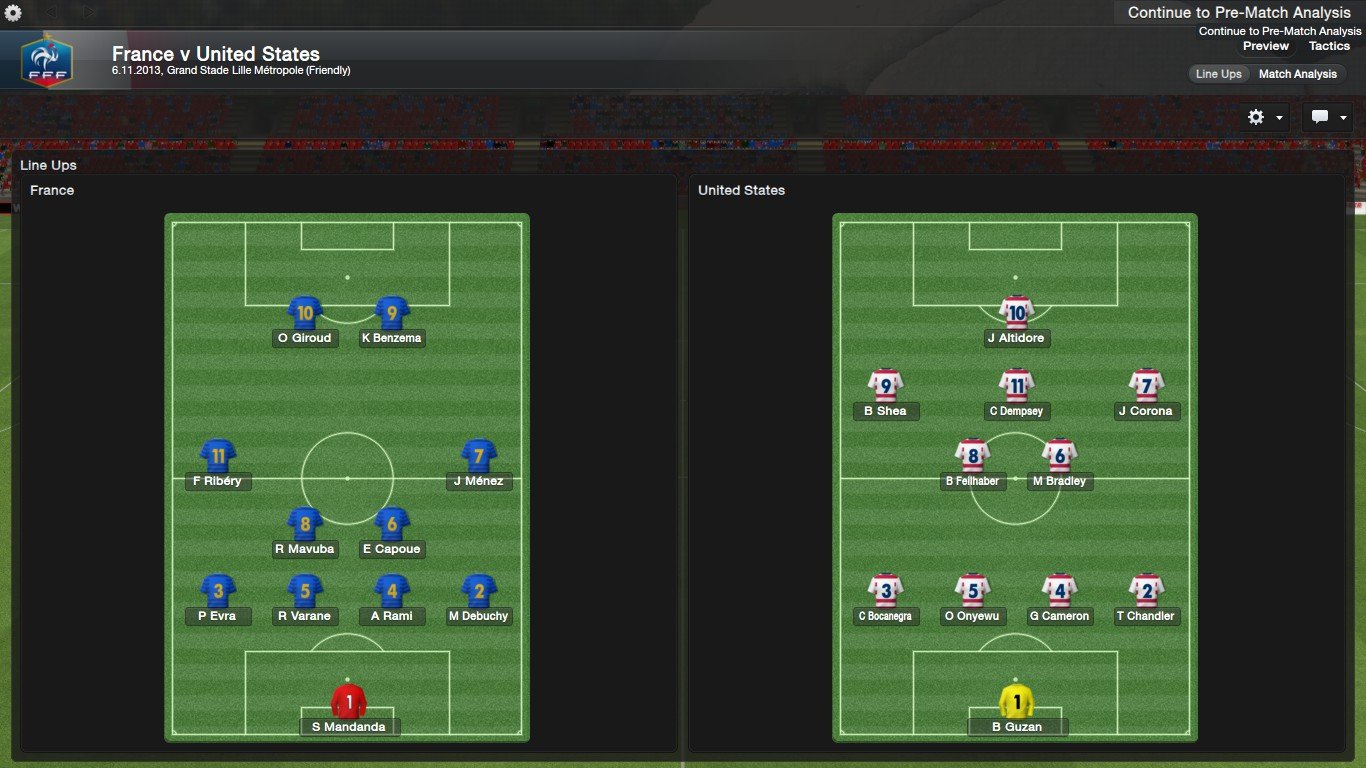 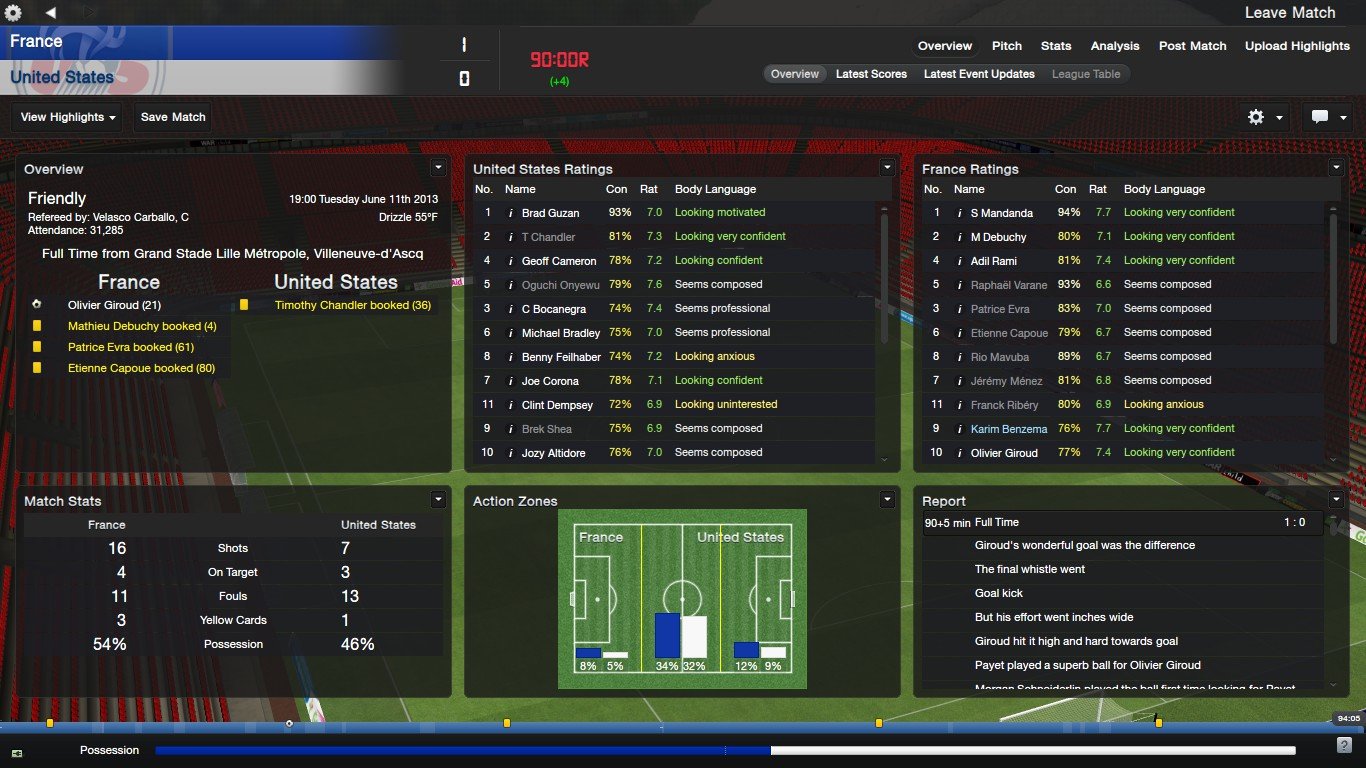 
Nathan Limior announced the preliminary squad for the CONCACAF Gold Cup. It is a little light on defenders, but some of the midfielders can play defense, too. As well, it is a little more star-studded than expected.

Mikkel Diskerud makes his long-awaited (well, in some circles) return to the United States squad, and Joe Corona will be set to see his first live fire in a United States shirt.

Notable exclusions are Matt Besler, Terrence Boyd, Chris Wondolowski, and Jermaine Jones. Pundits are lambasting the inclusion of Oguchi Onyewu, since he is starting to show signs of age.

BREAKING UPDATE: Oguchi Onyewu has been cut from the roster, since I had one too many players.
Login to Quote 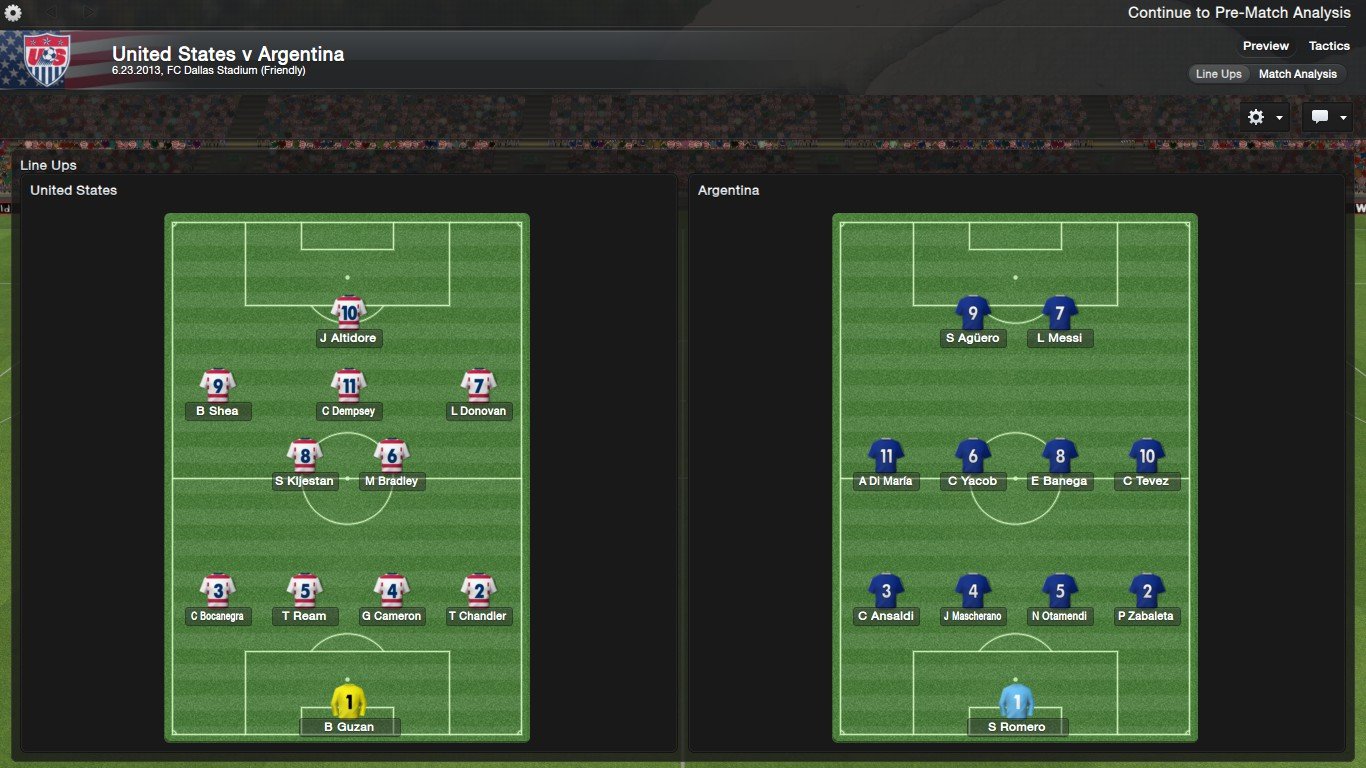 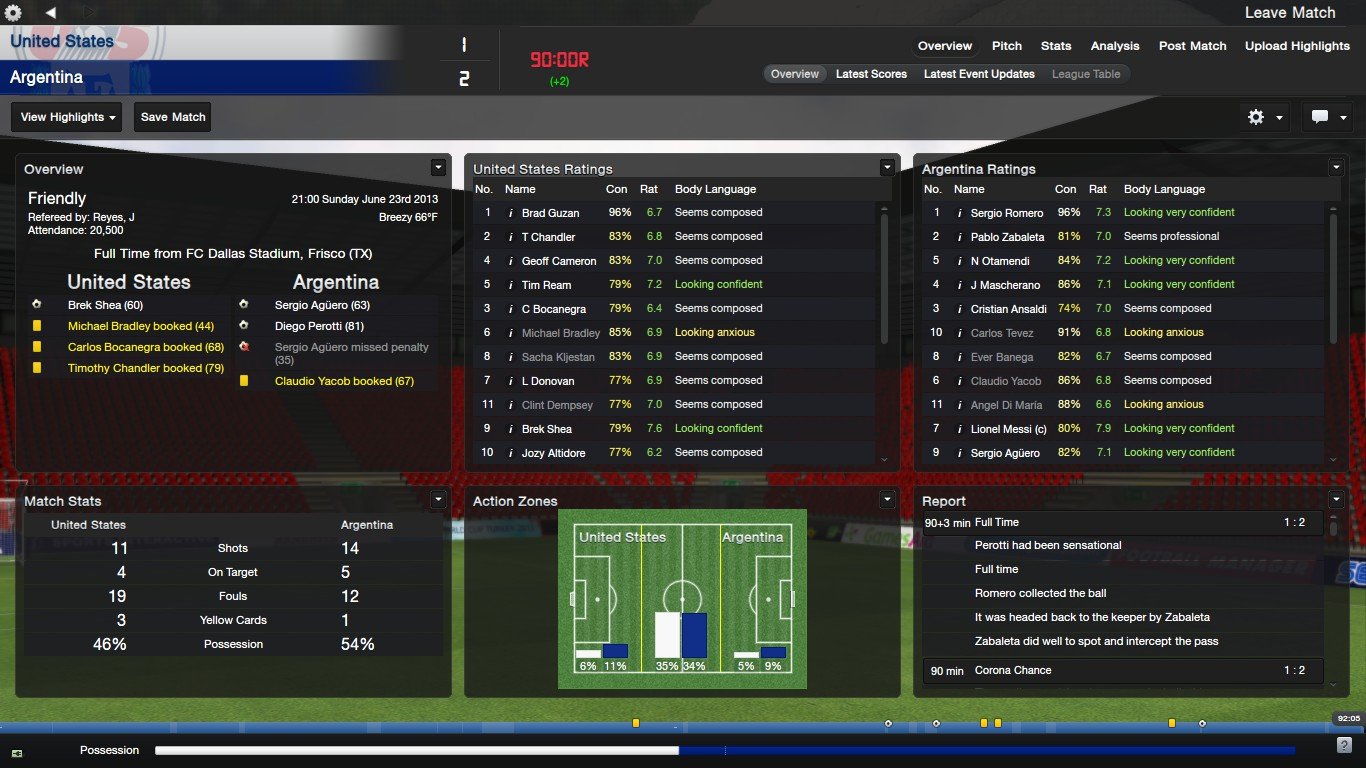 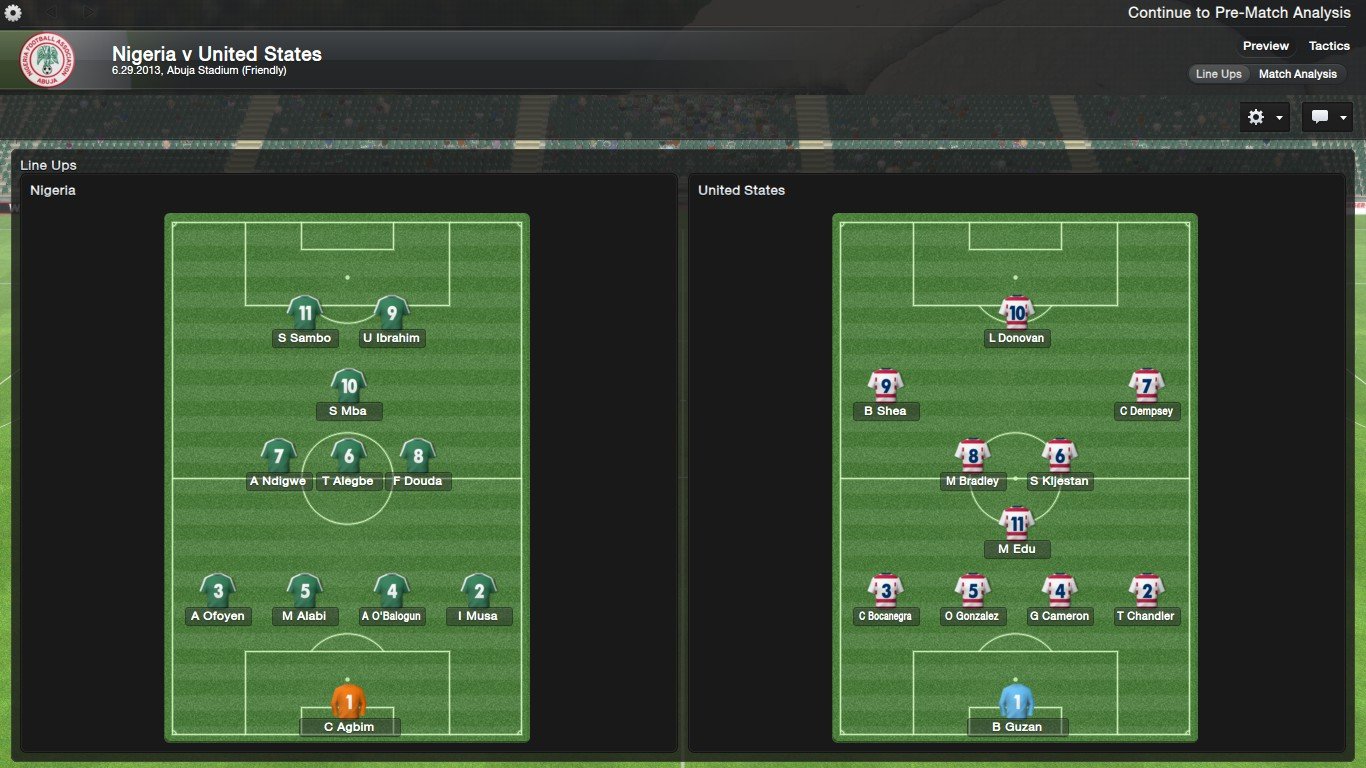 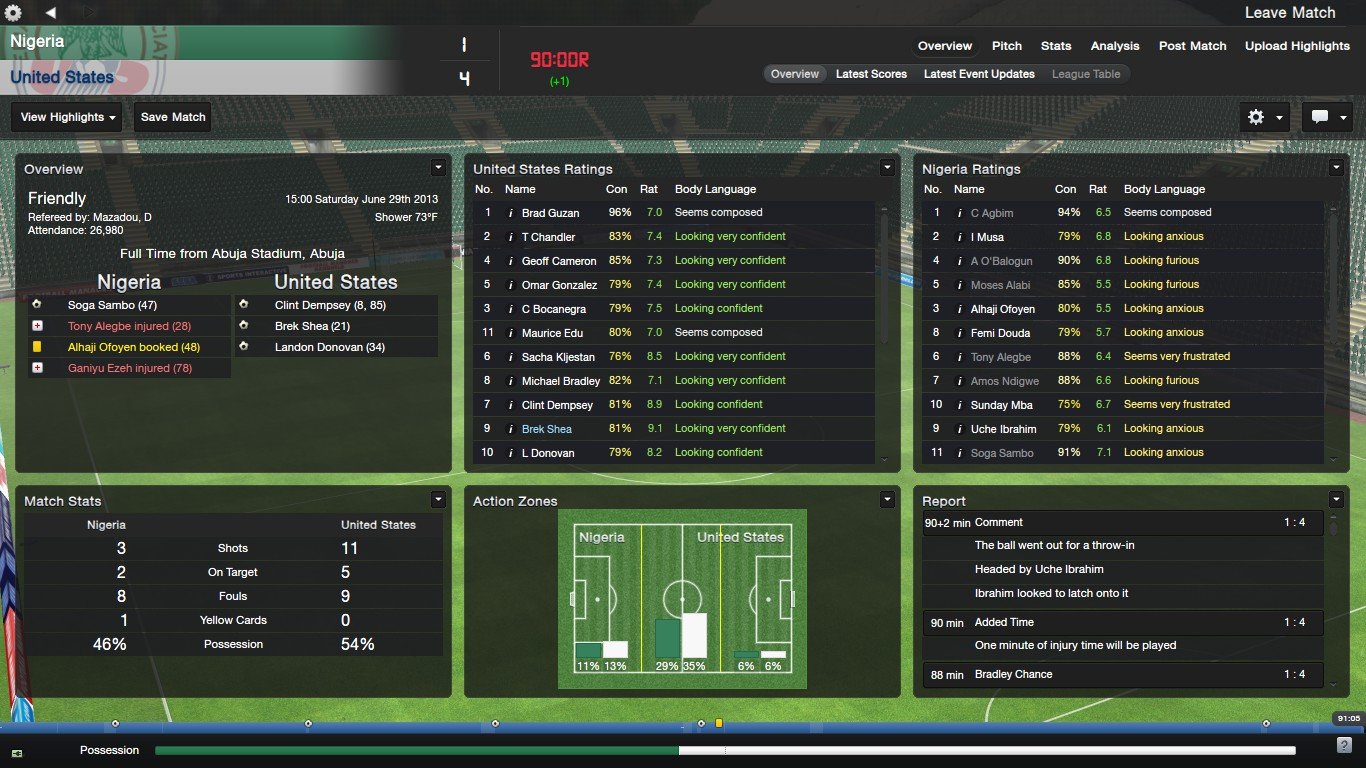 After a grueling slate of friendlies against France, Argentina, and Nigeria, the United States is ready for the Gold Cup. Nathan Limior's squad has to be considered the favorites since Mexico is sending a B team, but victory is not assured and the US must remain professional if they are to win the tournament.
Login to Quote 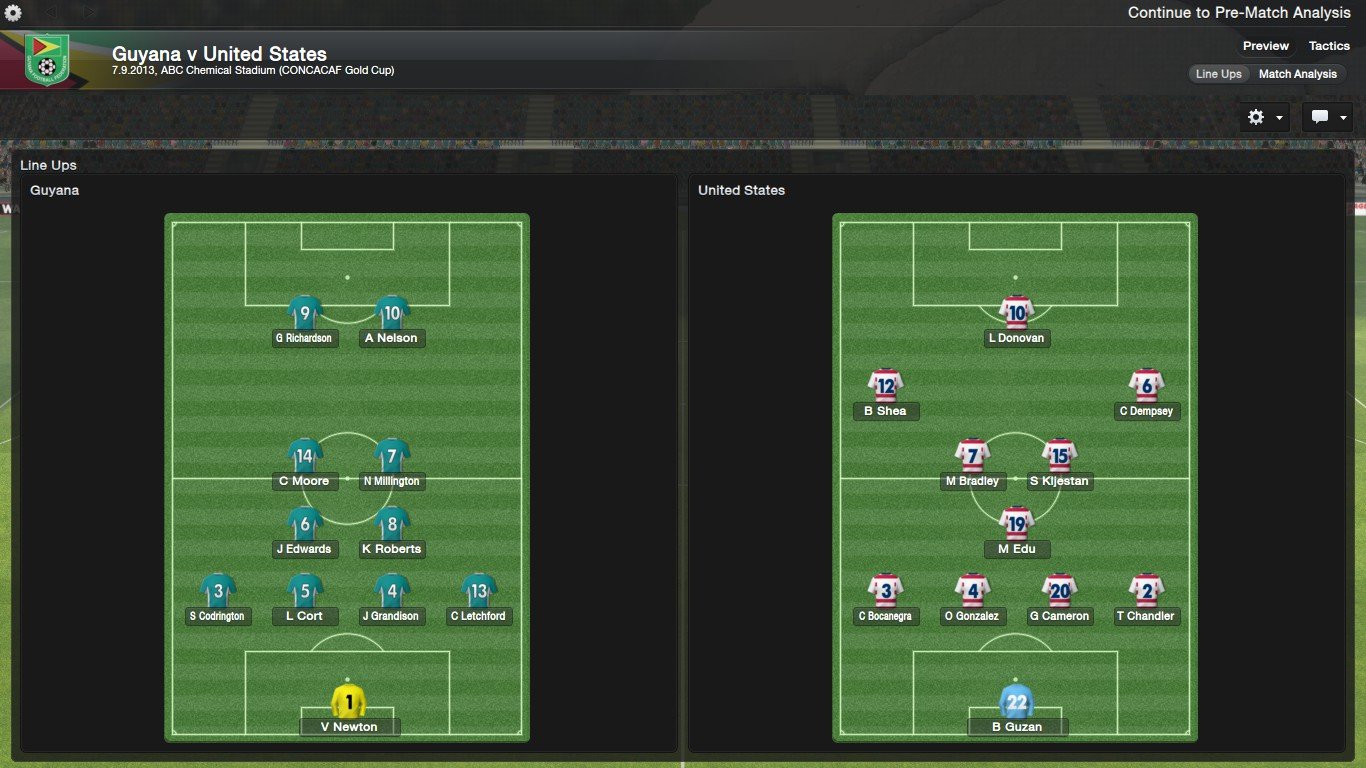 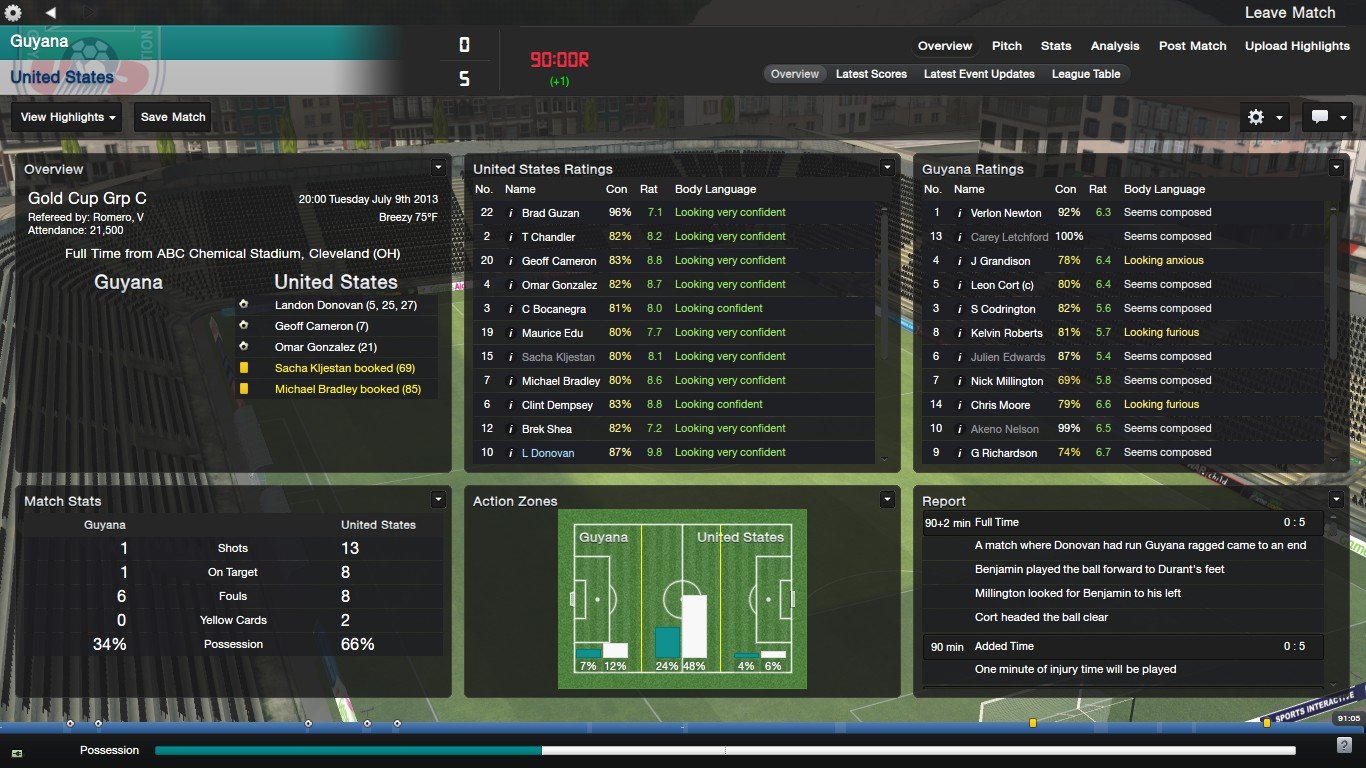 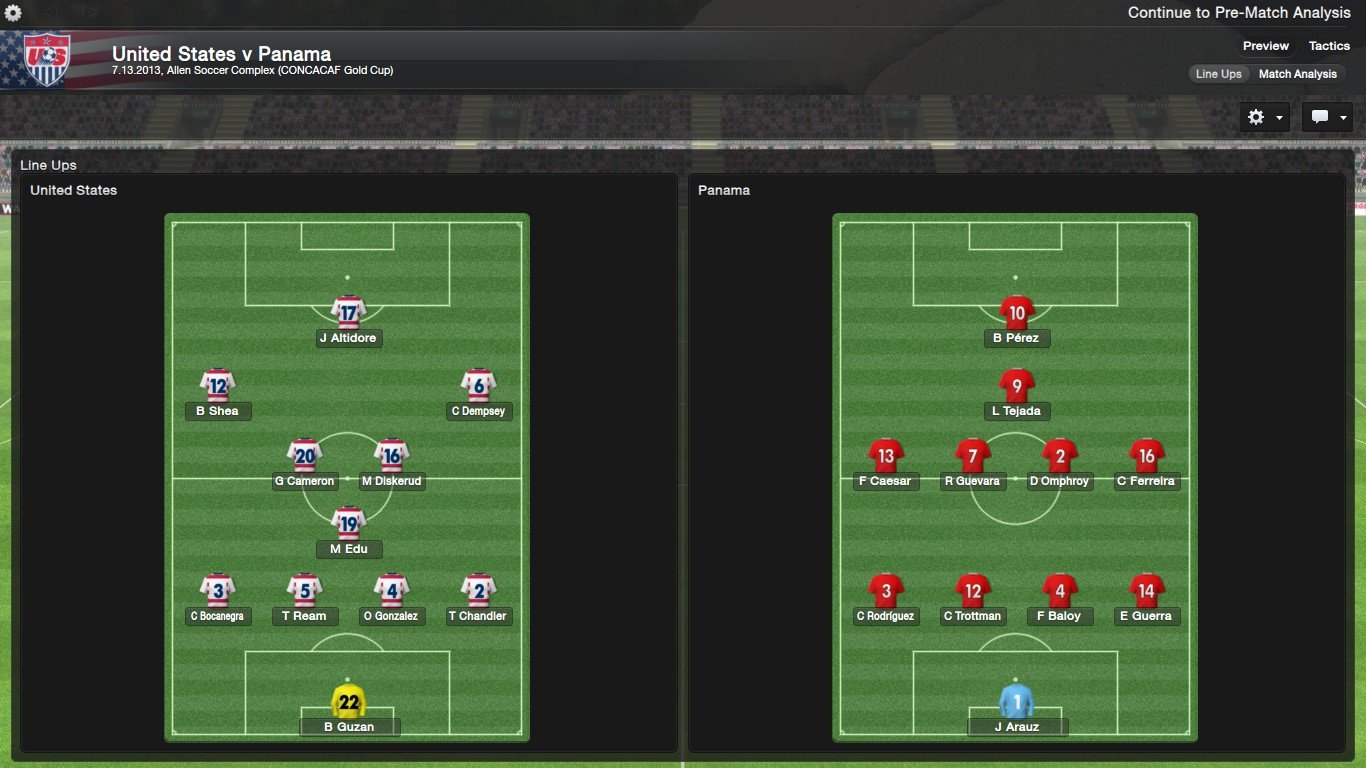 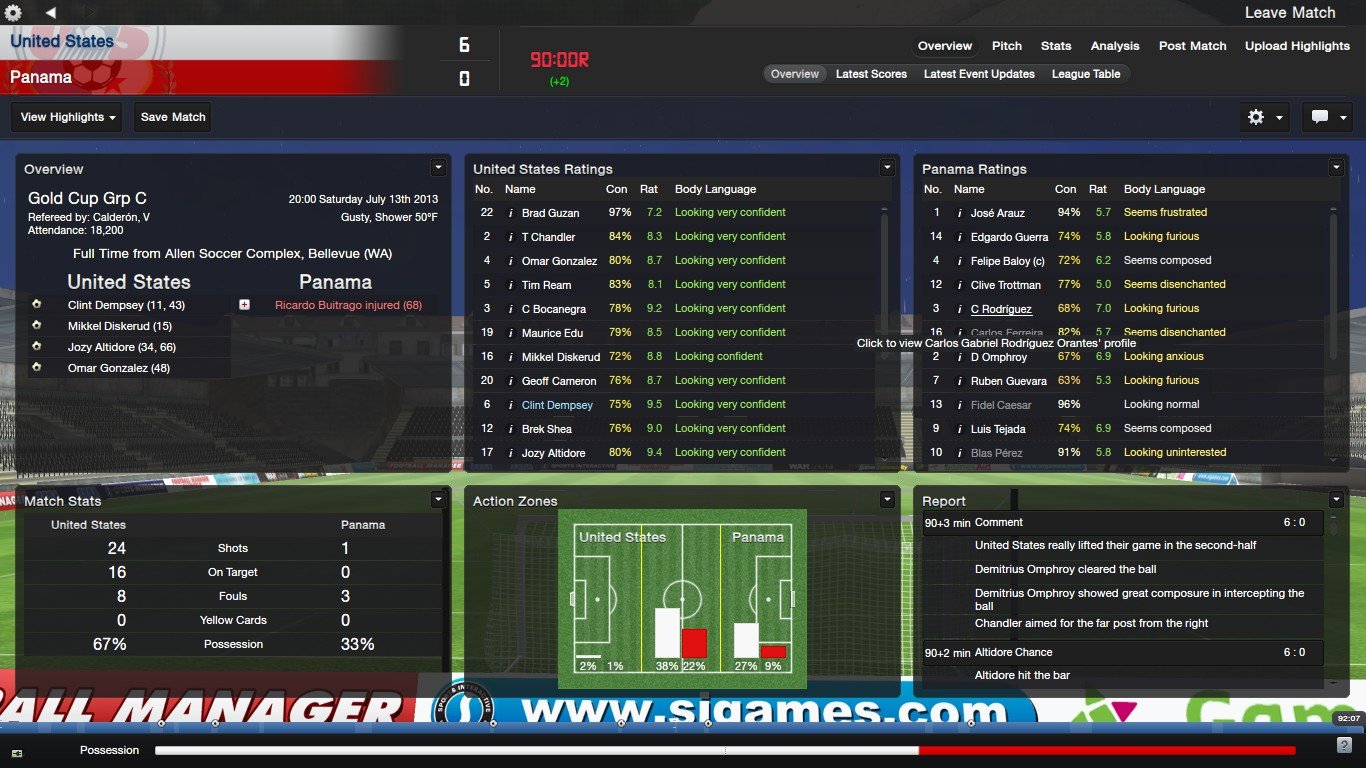 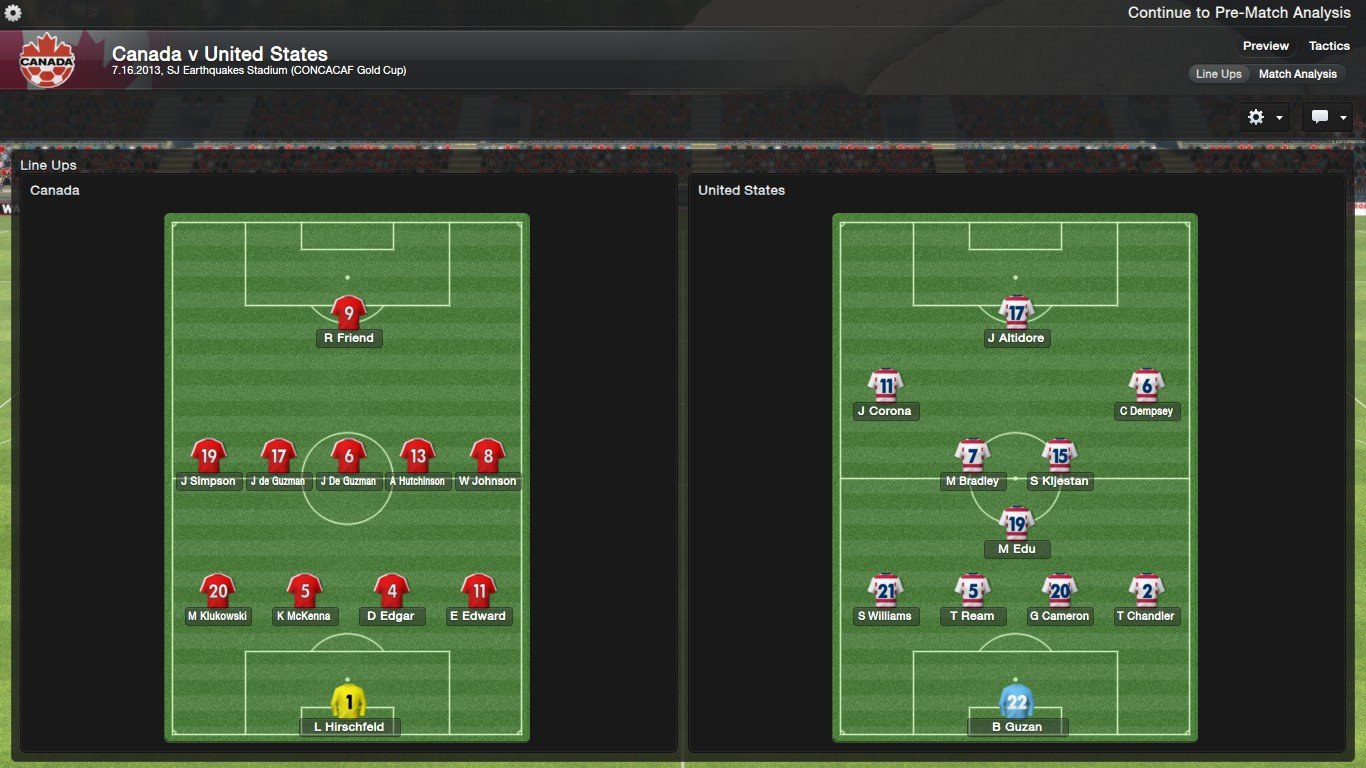 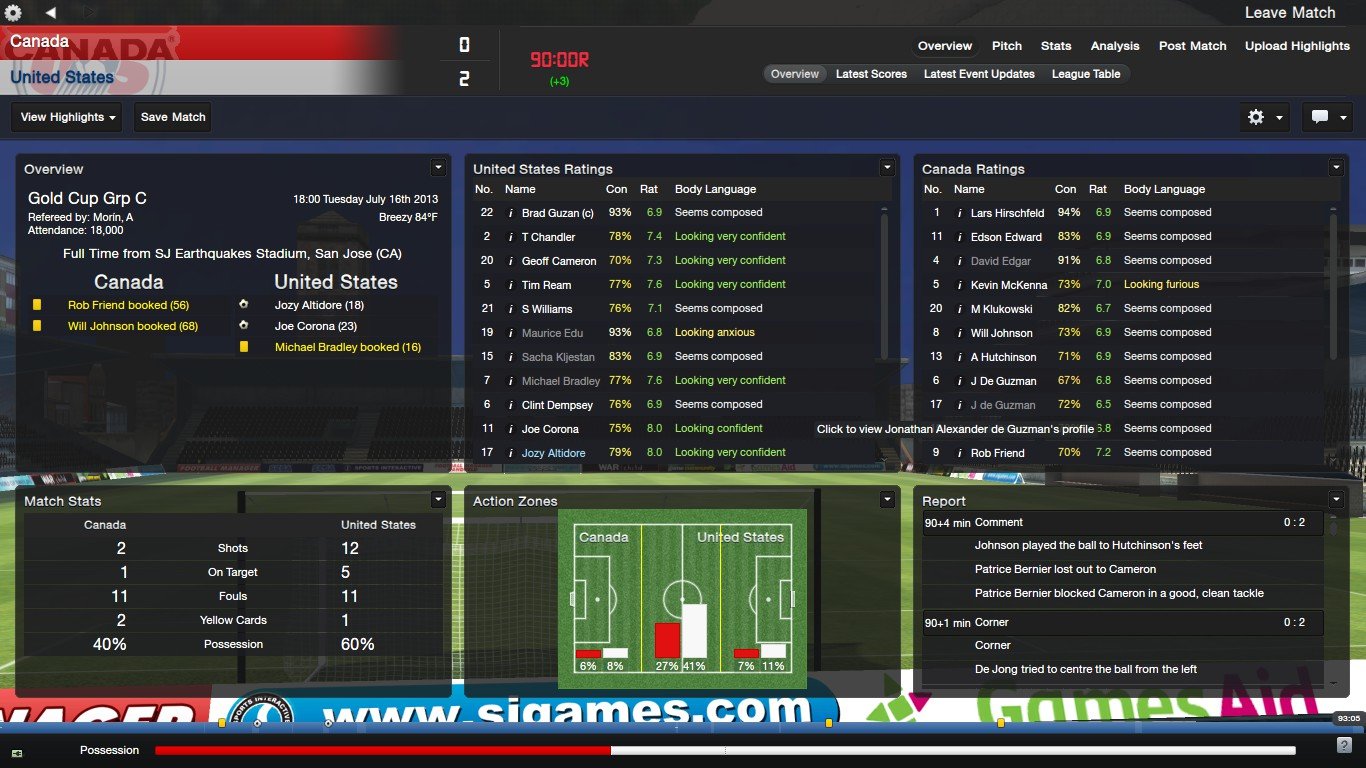 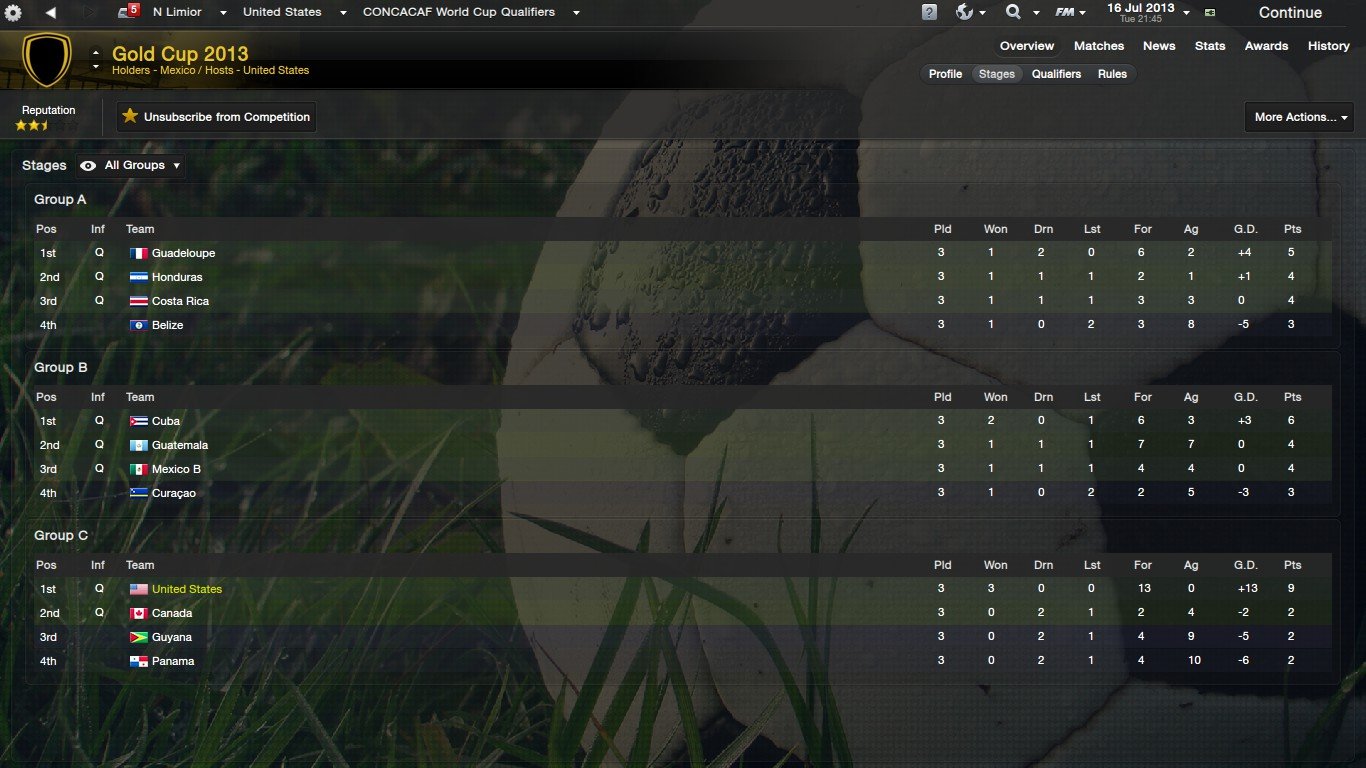 As expected, the United States easily qualified for the Quarterfinals. What might not have been so expected, was the dominance the US displayed. 13 goals, 0 conceded in the group stage, they look like the team to beat everyone was predicting beforehand.

k1rups
9 years
Some very strong results mate and narrow losses to France and Argentina is decent!
Login to Quote