CThack9
9 years
Great updates, hard to believe Canada was so close to winning the Gold Cup! haha
1
Login to Quote

Jozef
9 years
I must admit I haven't heard of some of those players, but the ones I have heard of are really good. Also I love the style of your updates, keep it up.
1
Login to Quote

With a 3-2 victory at the United States and an astounding 7-0 victory over Trinidad and Tobago, Mexico has reasserted itself within the CONCACAF and have gained qualification into the World Cup. As well, Honduras ensured themselves of at least a playoff berth. Nathan Limior was fuming after the US blew an apparent 2-0 advantage to lose 3-2, "What the f[bleep] was US Soccer thinking, putting this game in California? That was practically a second road game for us! Seattle, Portland, Columbus, anywhere but the Southwest!" 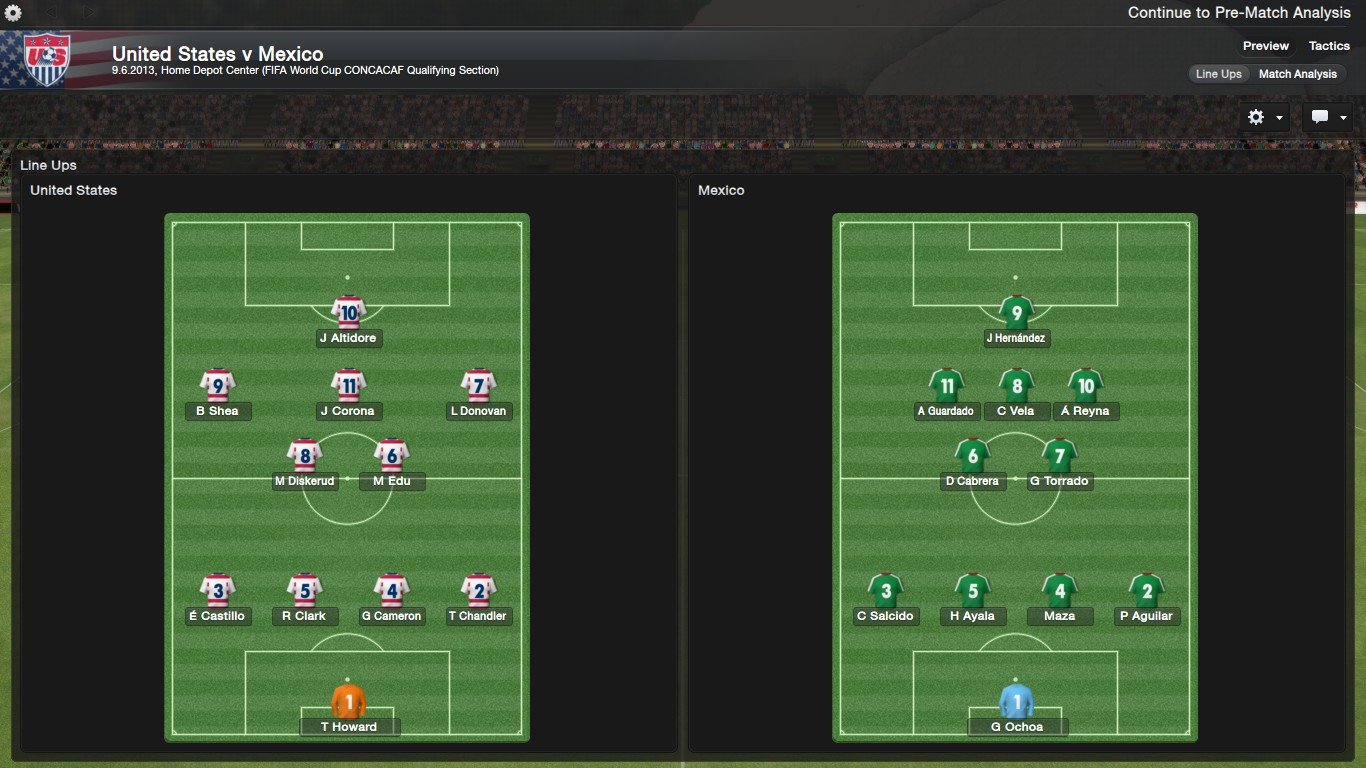 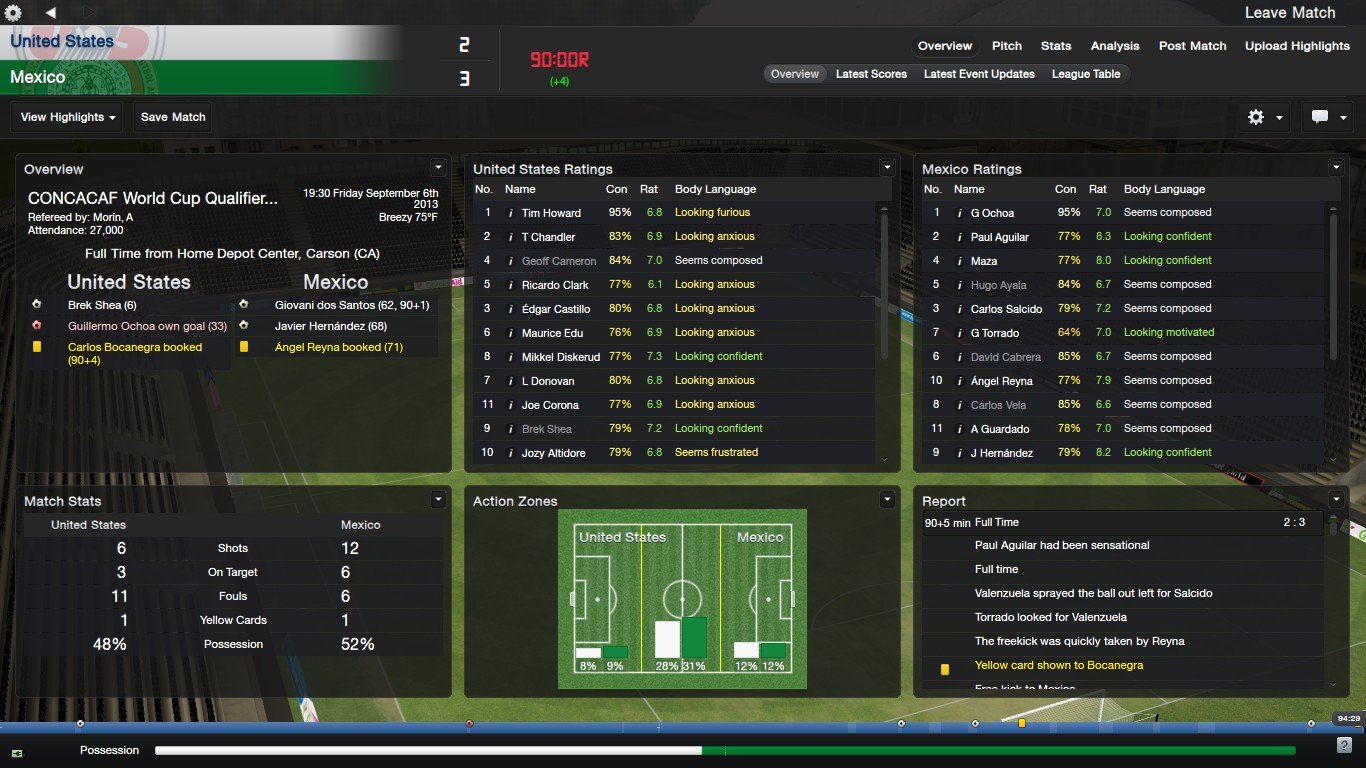 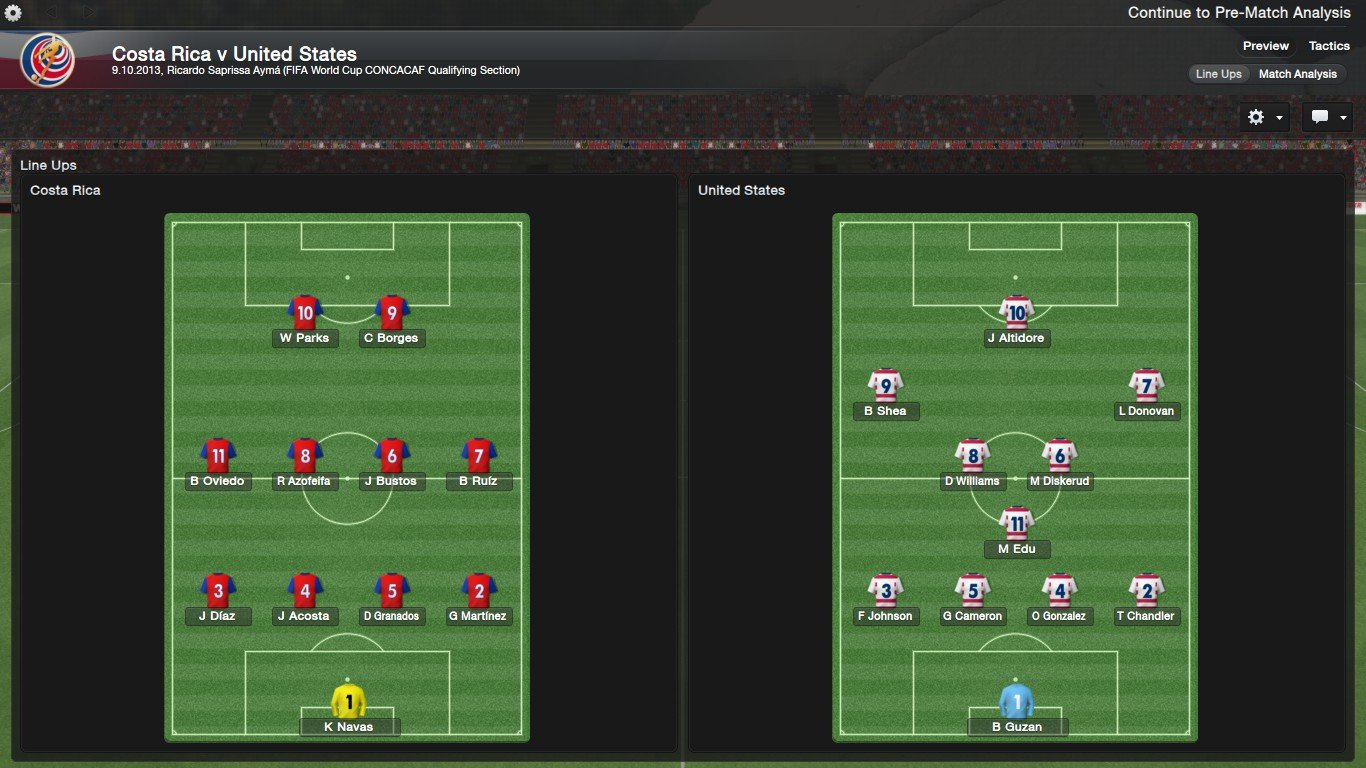 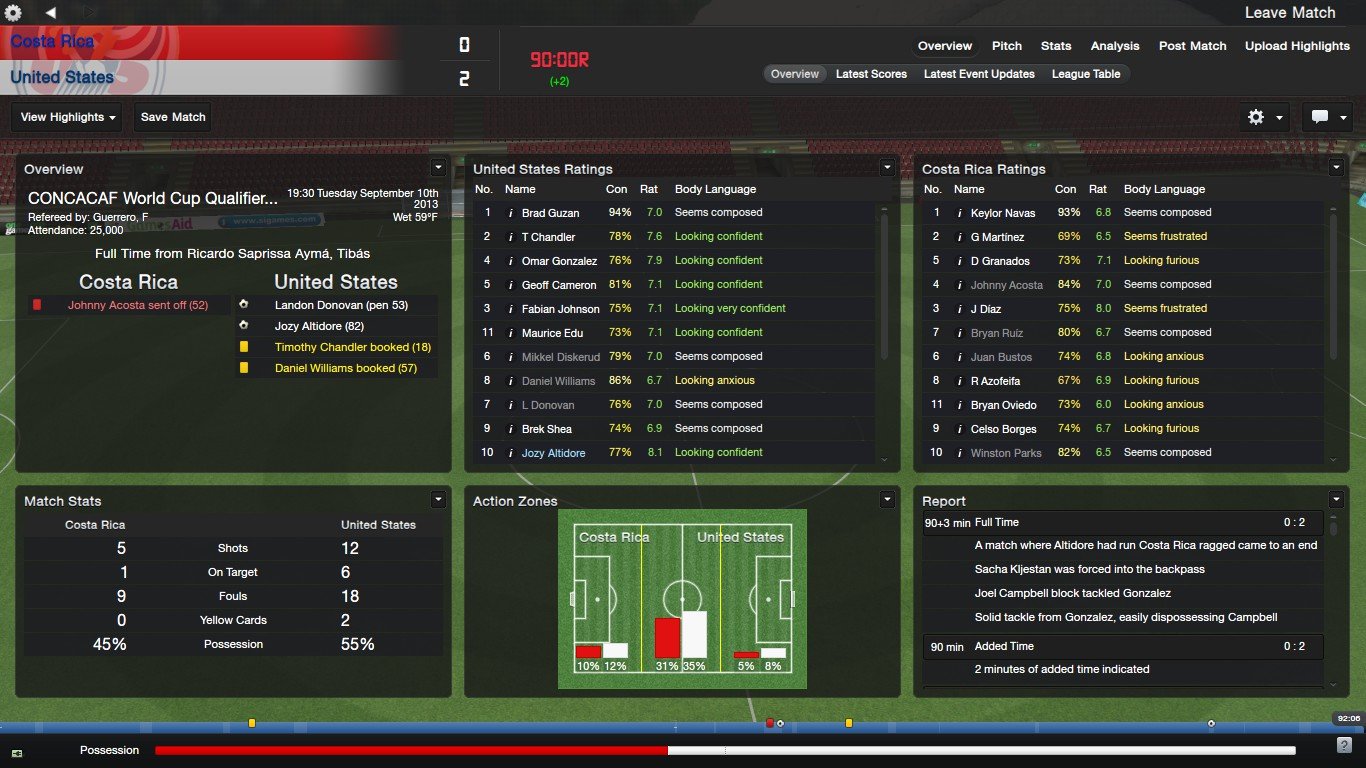 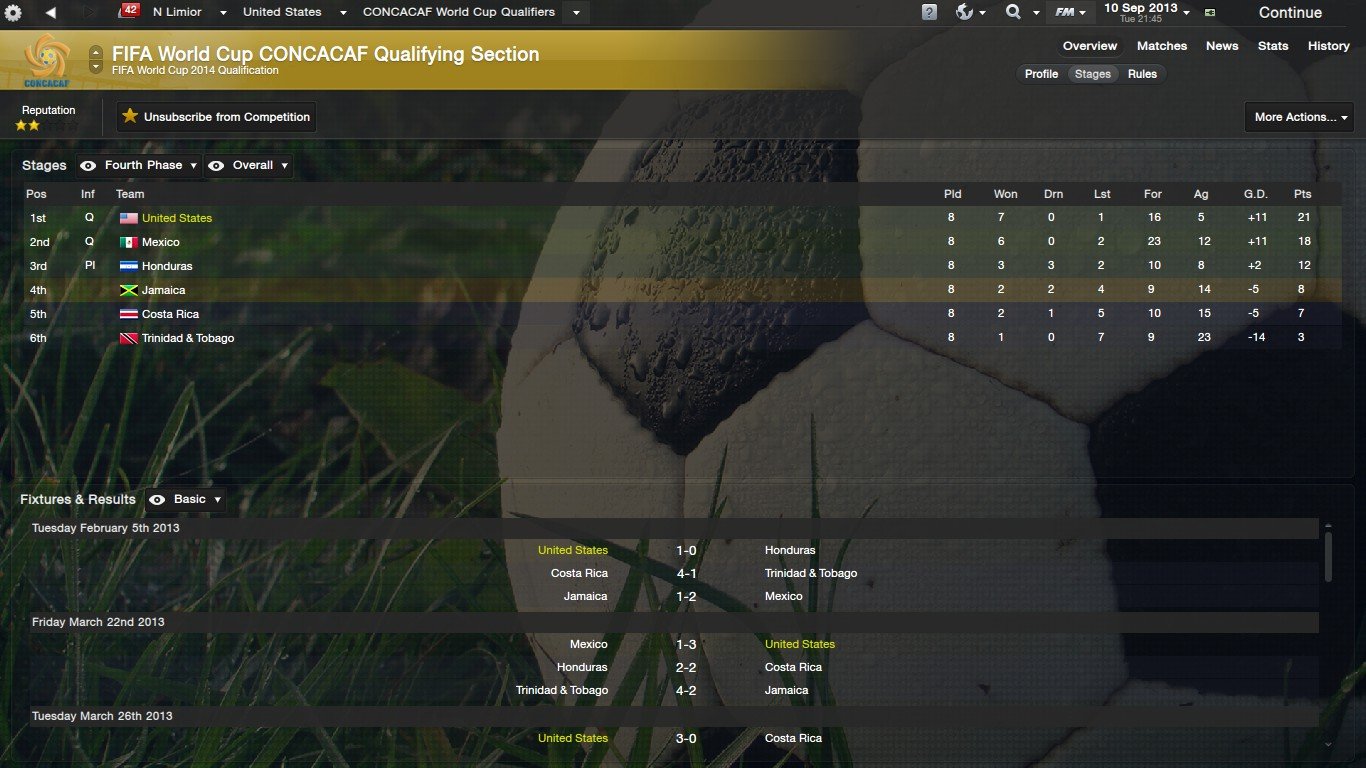 Deleted
9 years
Really enjoying this. Keep It Up
Login to Quote 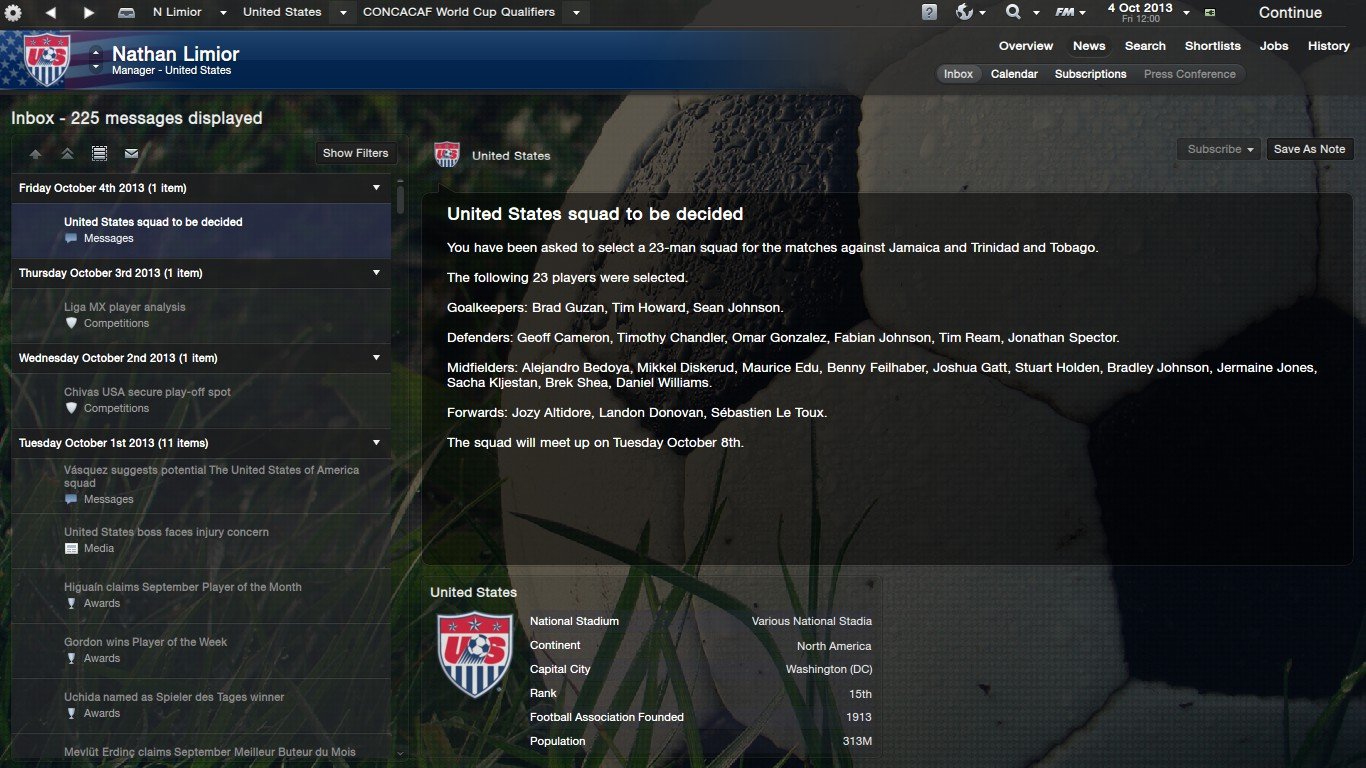 - Onyewu and Bocanegra are on the decline, so I want to get used to playing without them it what amount to glorified friendlies.
- Only three forwards this time, because I don't need four. Donovan doesn't really count since I usually deploy him on the right wing, anyway.
Login to Quote 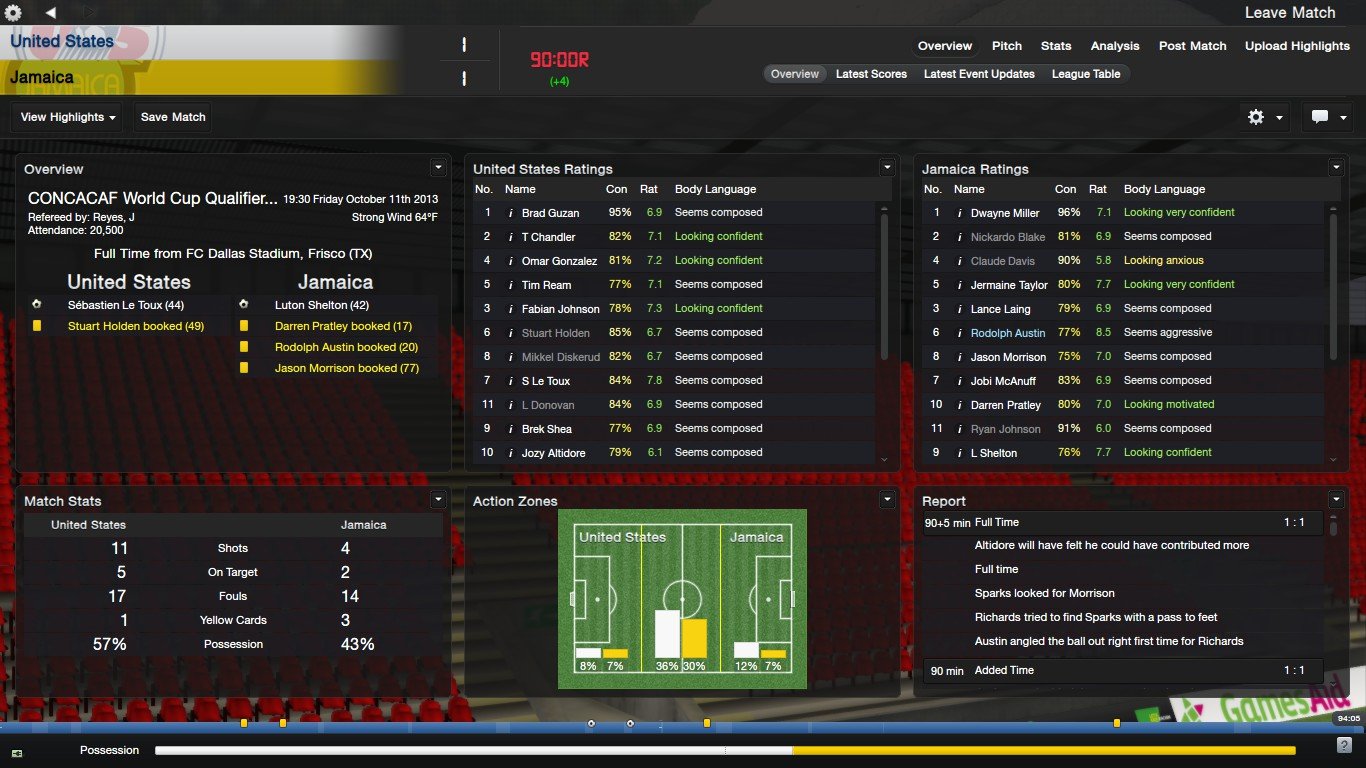 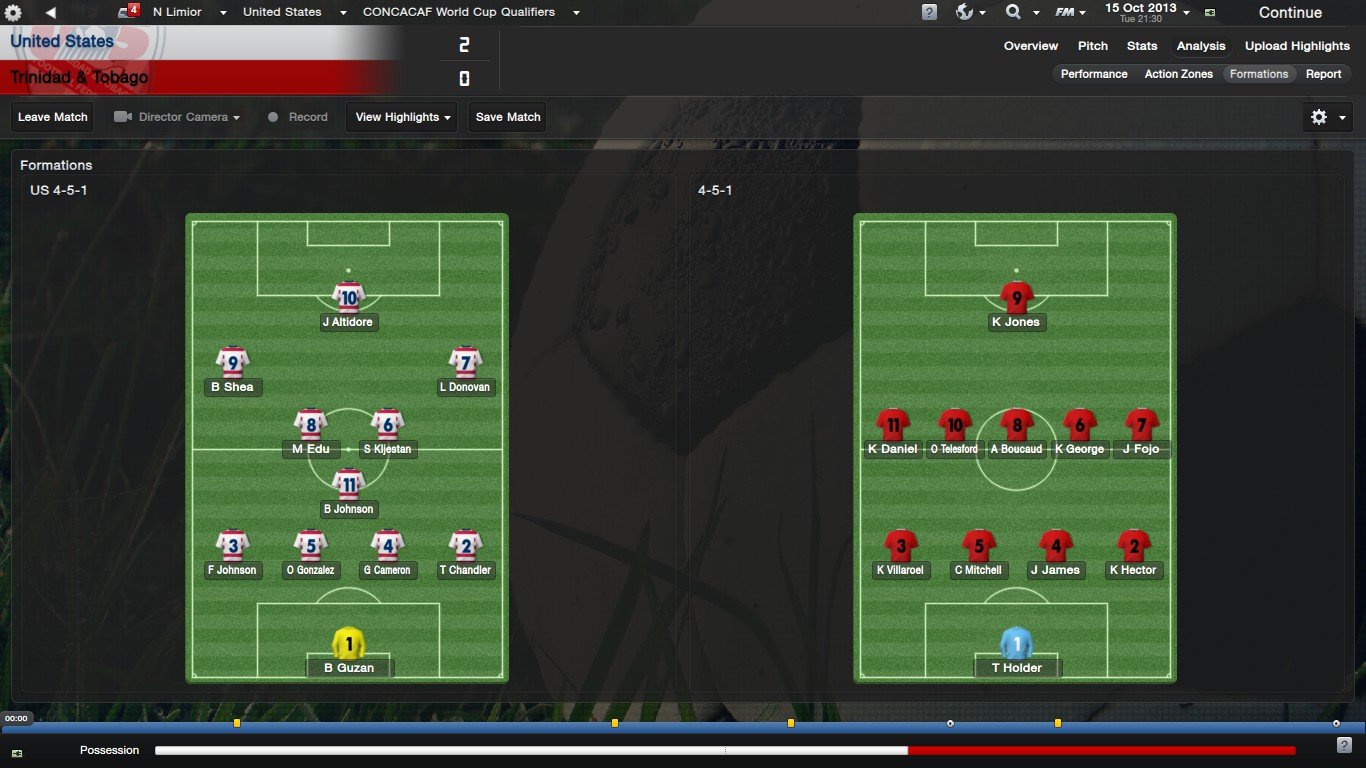 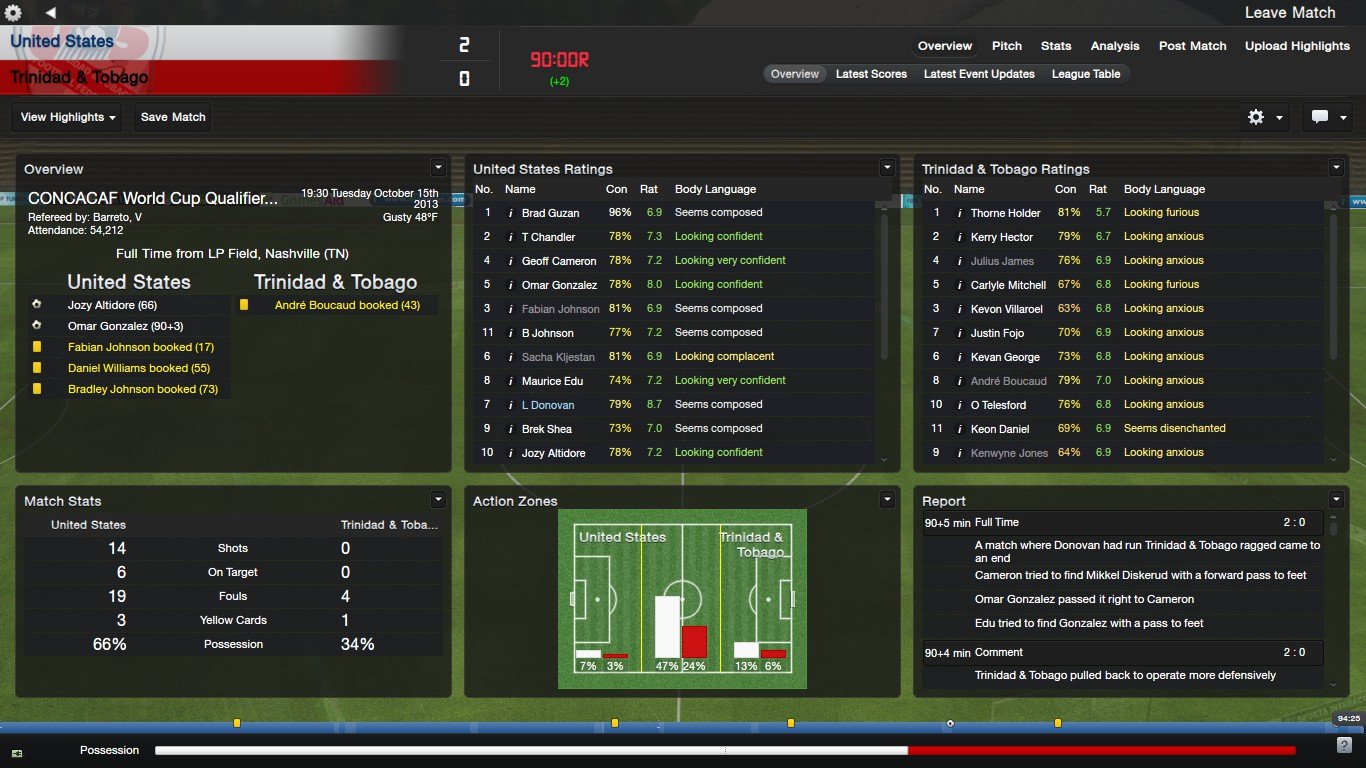 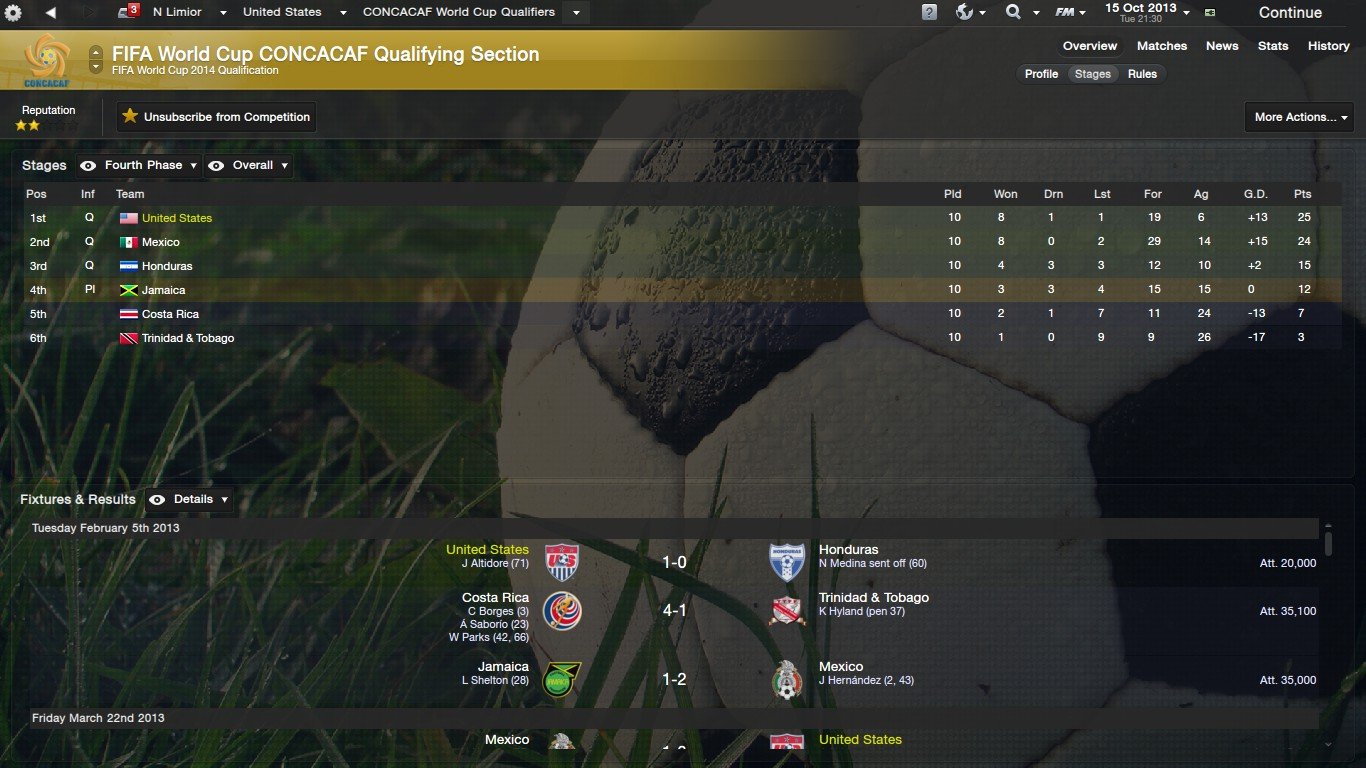 The United States, Mexico, and Honduras automatically qualify for the World Cup, while Jamaica can qualify with a victory in the playoff against Oceania. The US have friendlies scheduled against England and Germany in the run up to the World Cup.
Login to Quote

Feel free to make your predictions for who makes it out of each group!
Login to Quote

Can't Belgium never made it.
1
Login to Quote

Glenn T
9 years
USA should do just fine, it's England after all 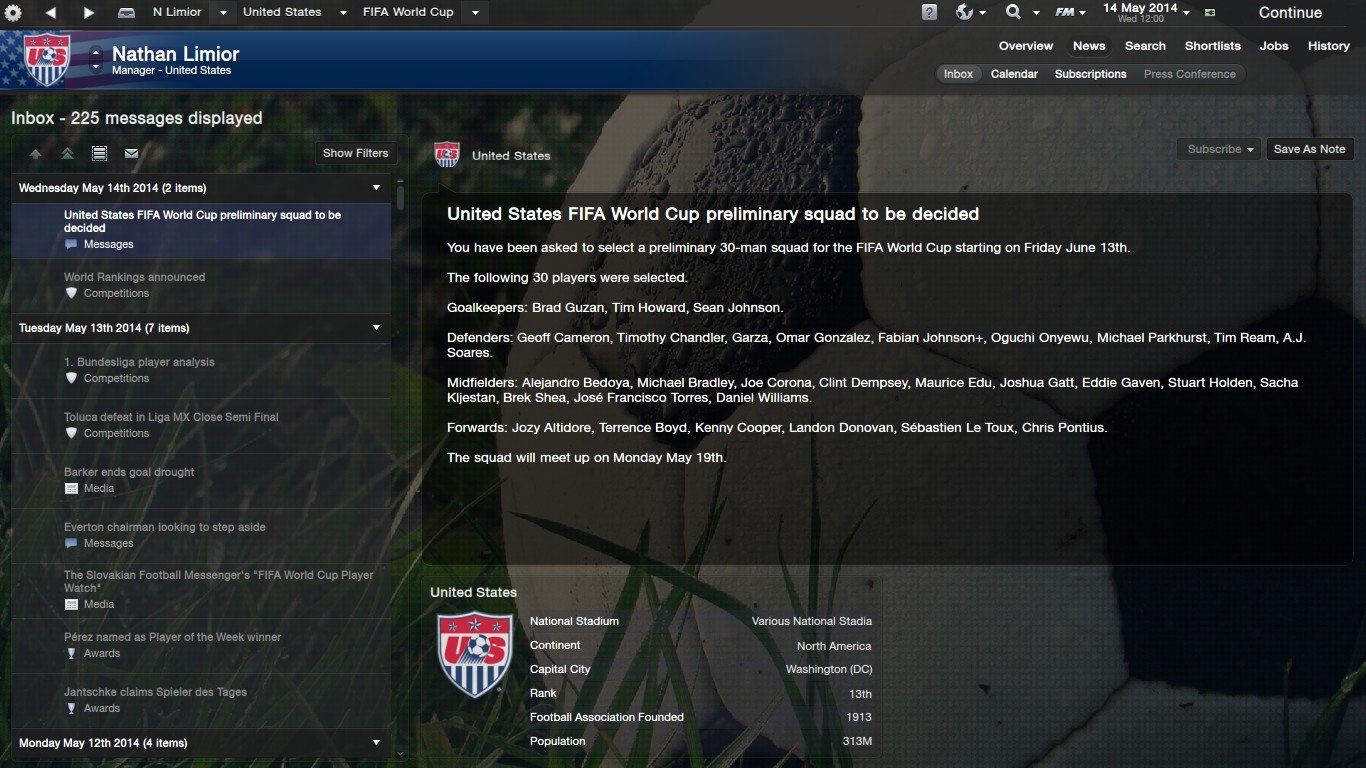 Here's what I will be rolling with in friendlies against Switzerland, Germany, and France, and the World Cup. I think I'll have to cut down to 23 later though, and that'll be an incredibly tough cut. 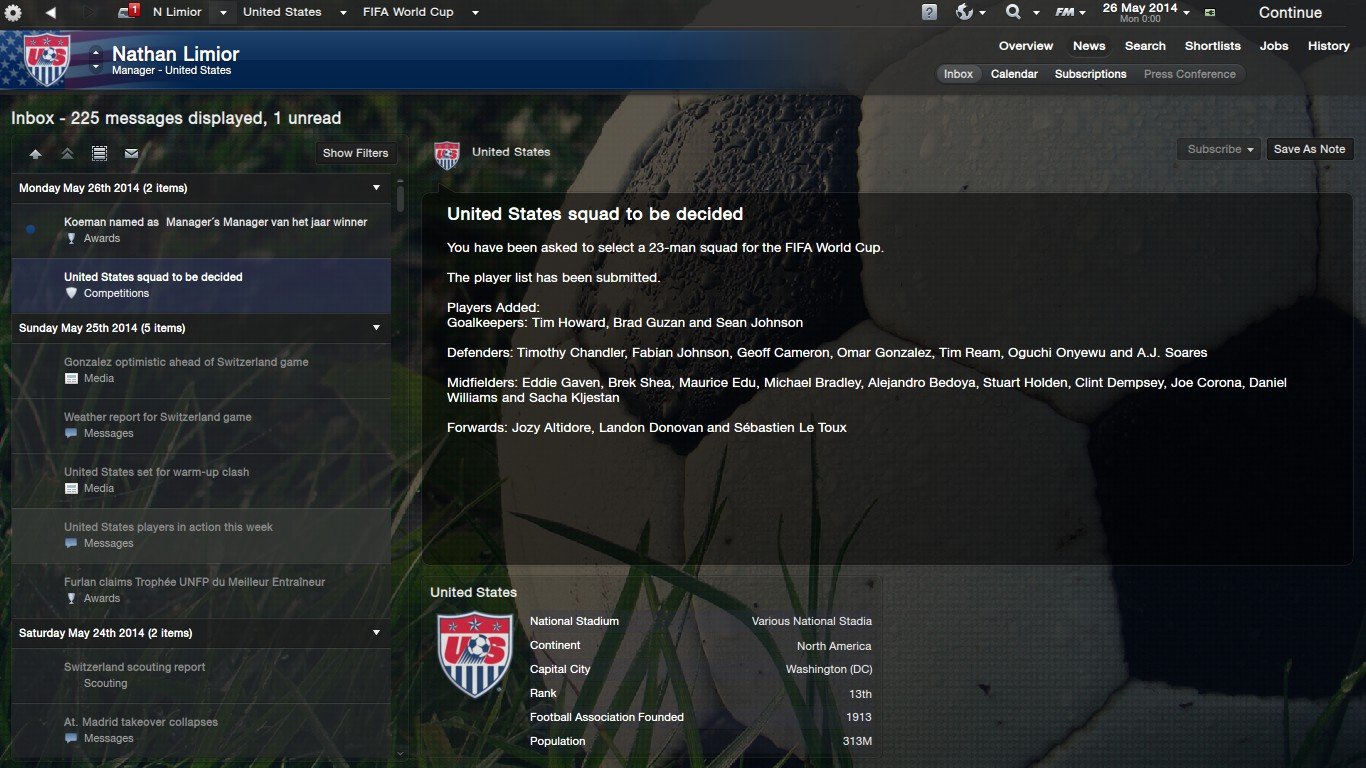 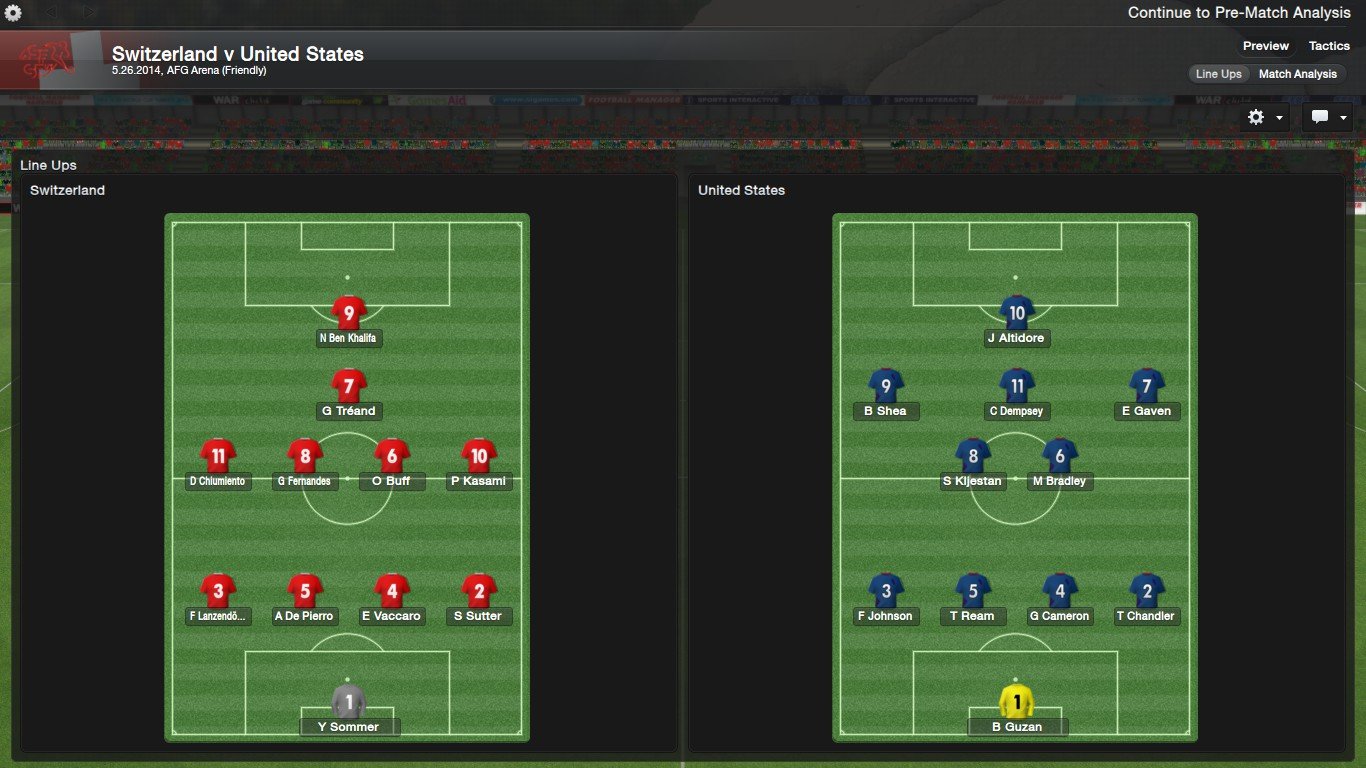 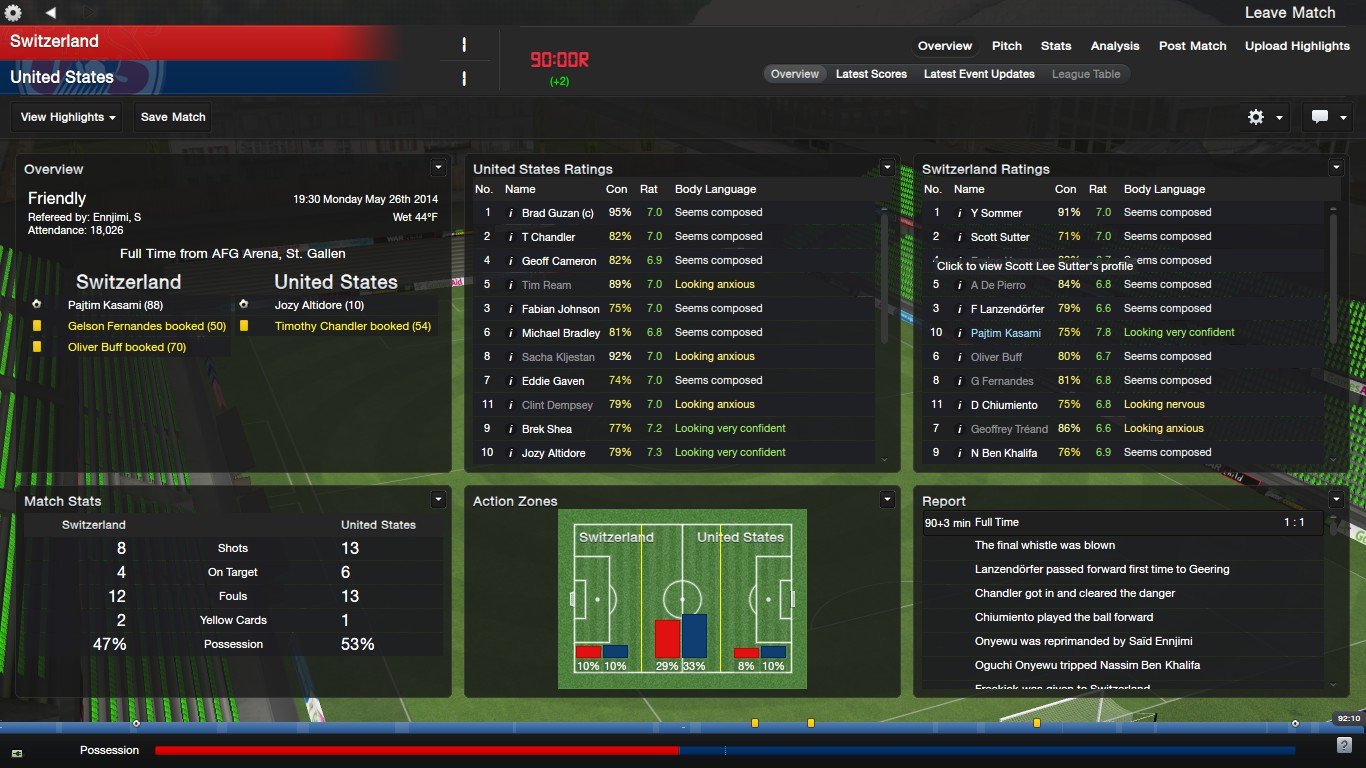 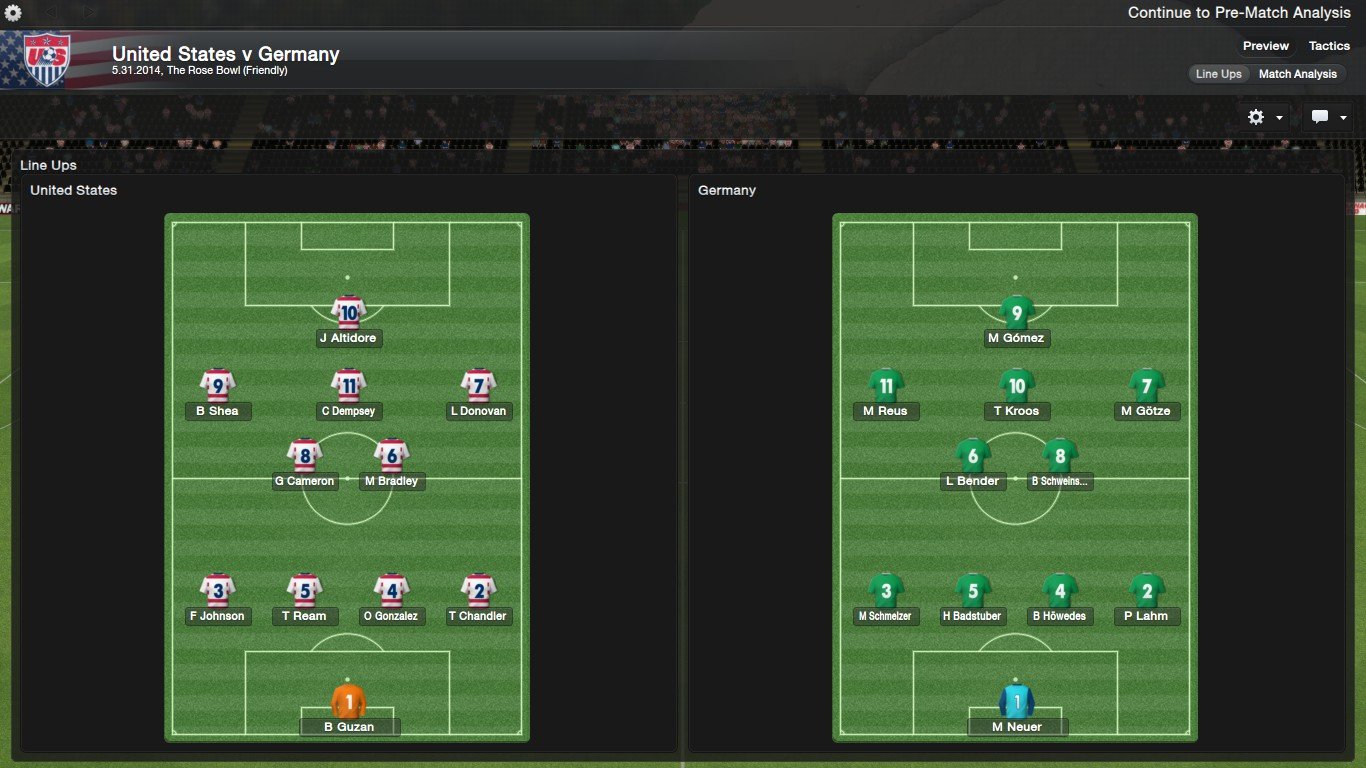 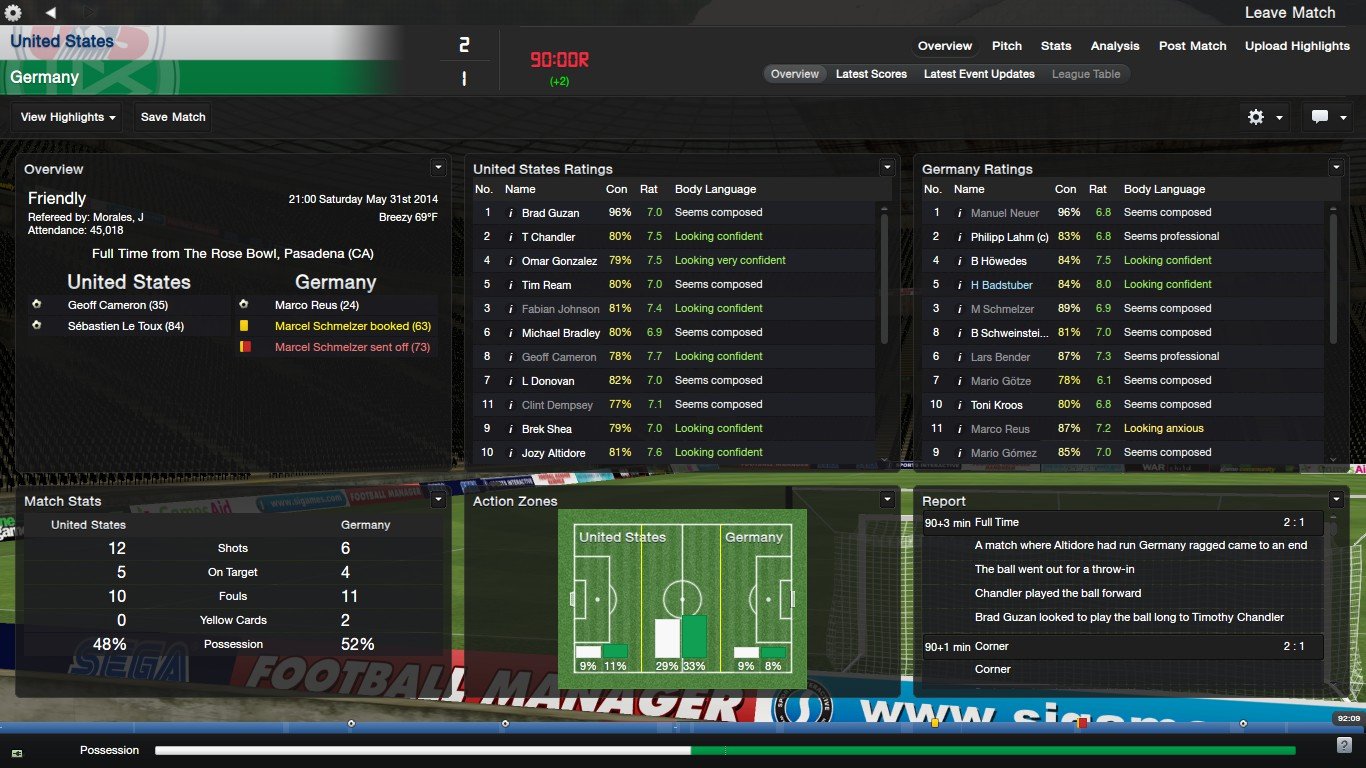 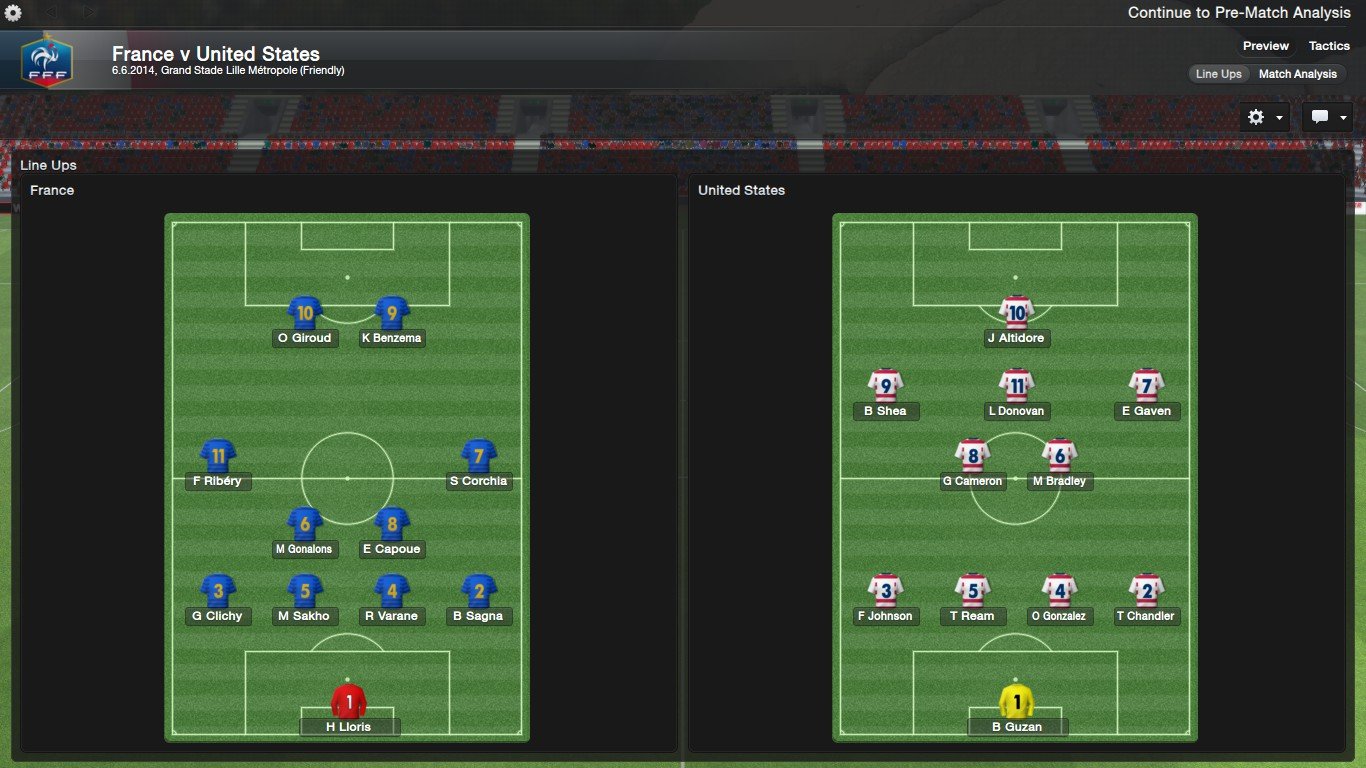 American fans have an unstated optimism leading into the 2014 World Cup in Brazil. Despite being drawn in with Peru, England, and Netherlands, fans think that the United States will be able to qualify from that group, but don't want to say it, as if it will jinx the US hopes. Nathan Limior stated in a pre-World Cup press conference, "We played some great European opposition, since we have great European opposition in our group. I wanted to instill the belief in my players that we can go in and beat top sides, that we can boss them around. I thought we could win all 3 games, since we had leads in two, and just blew them. My players and I hopefully have learned some lessons from the gauntlet of friendlies and apply it to the struggle ahead."
Login to Quote 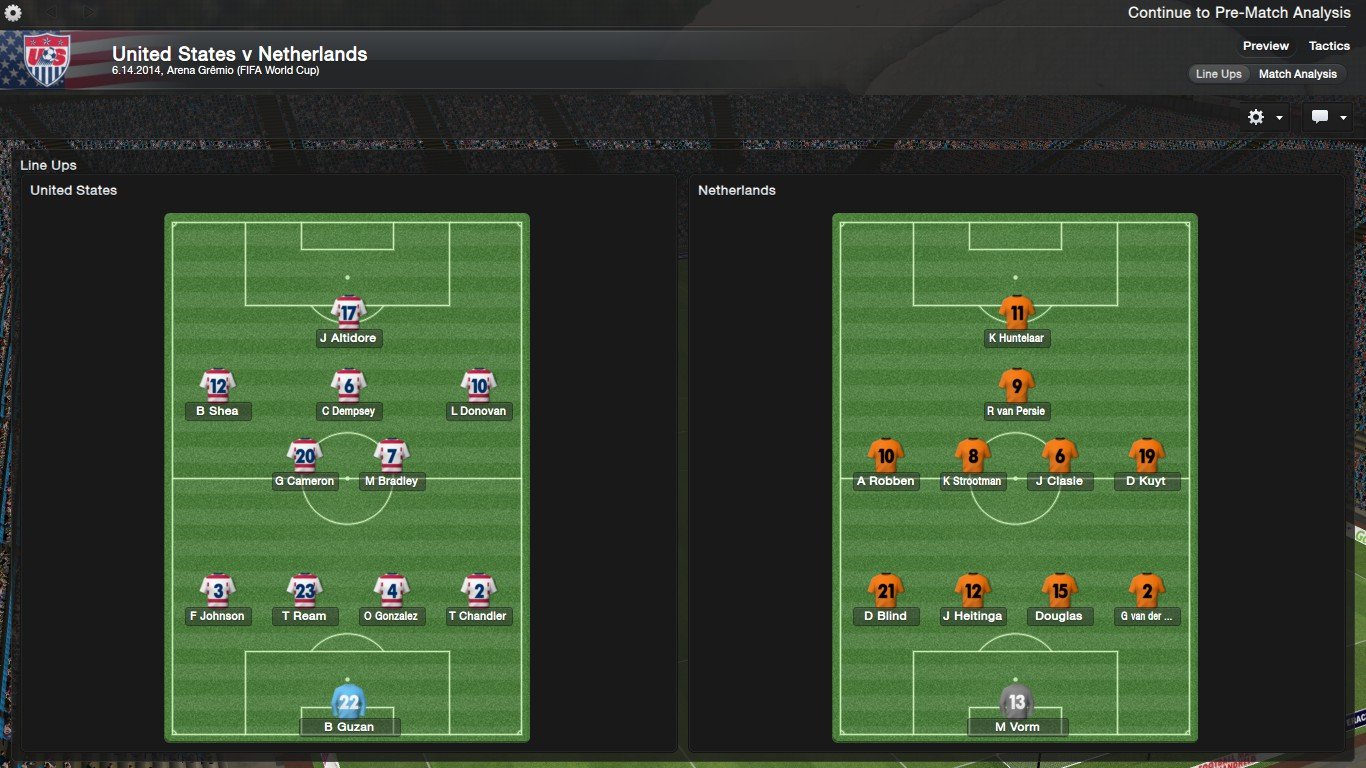 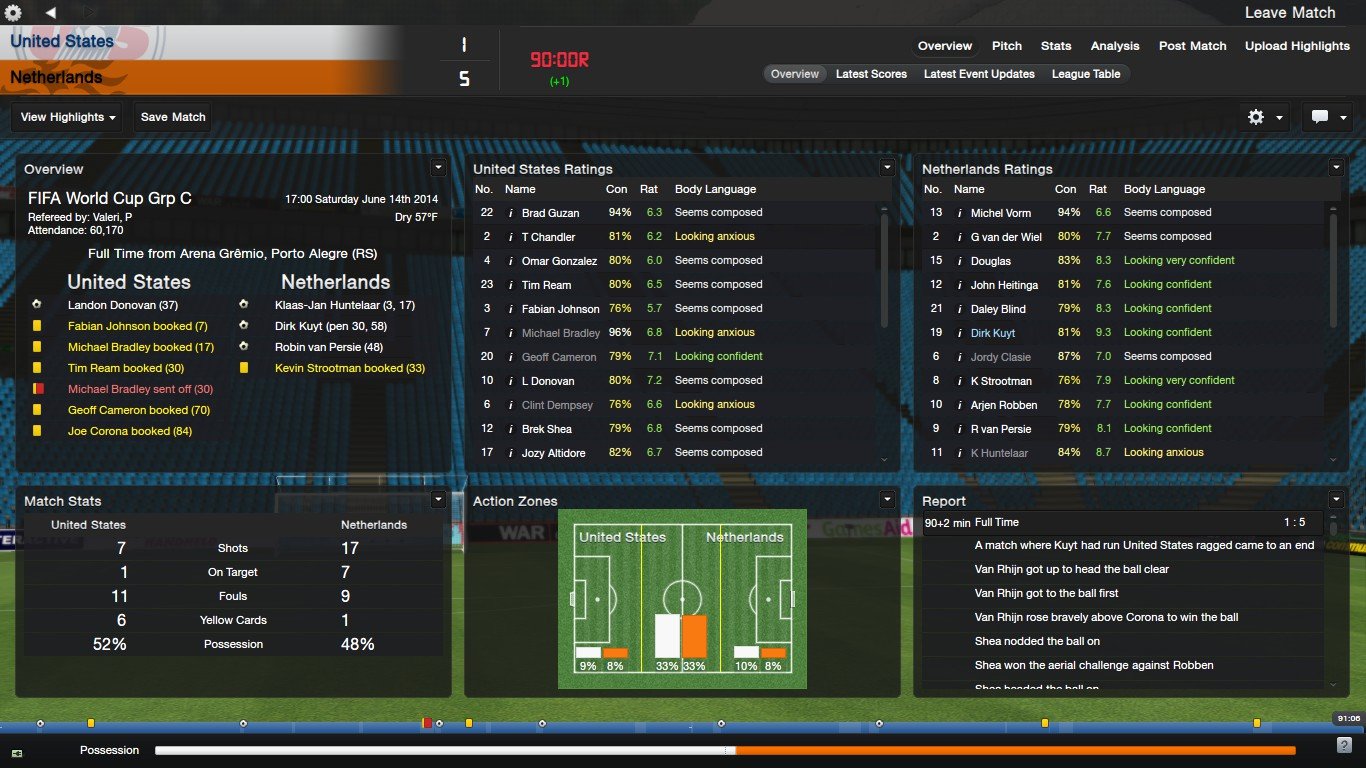 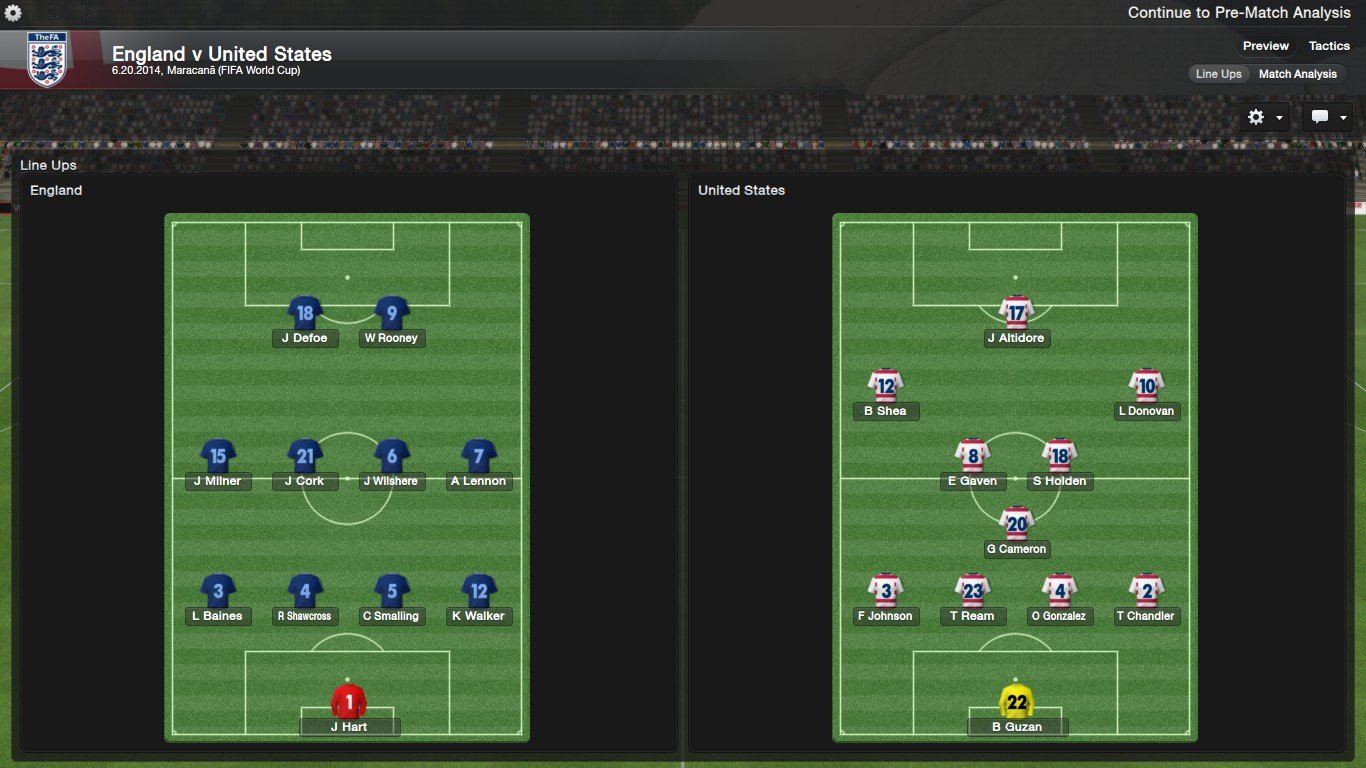 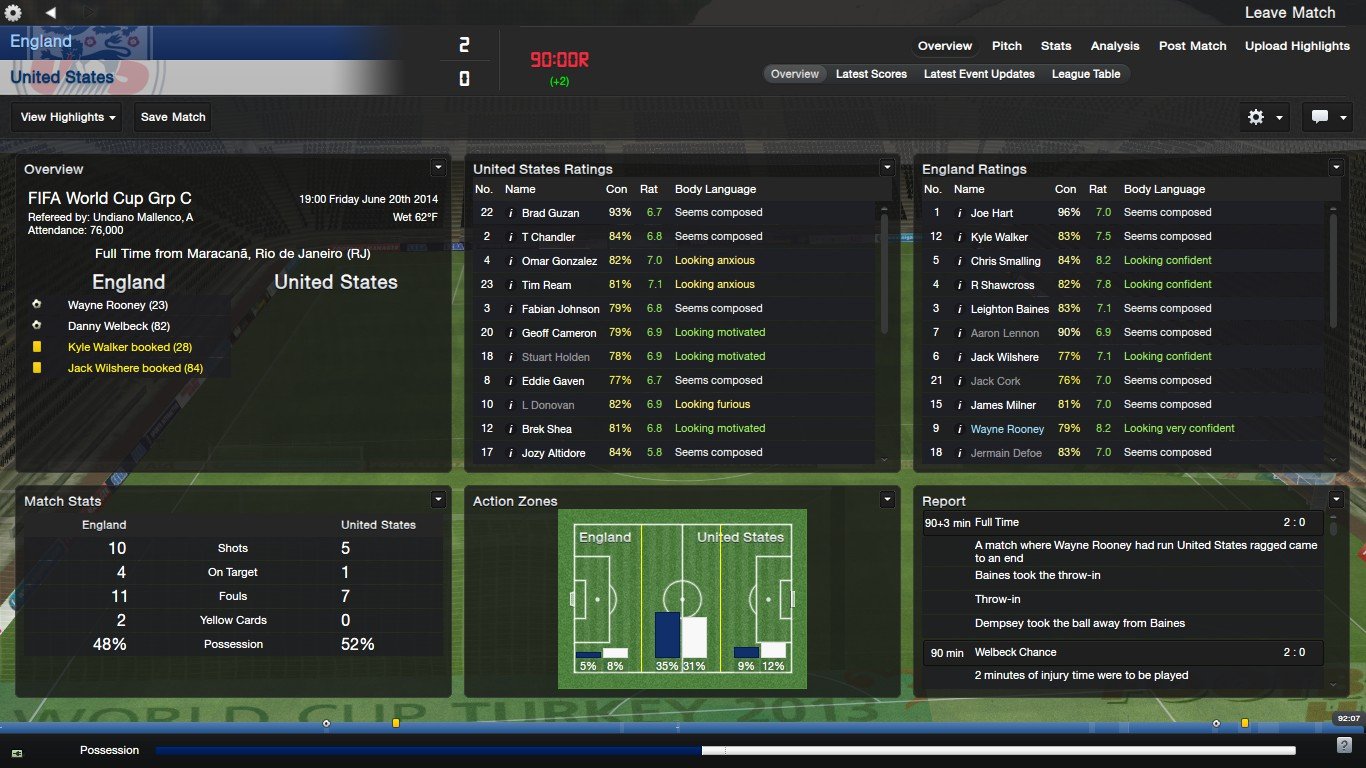 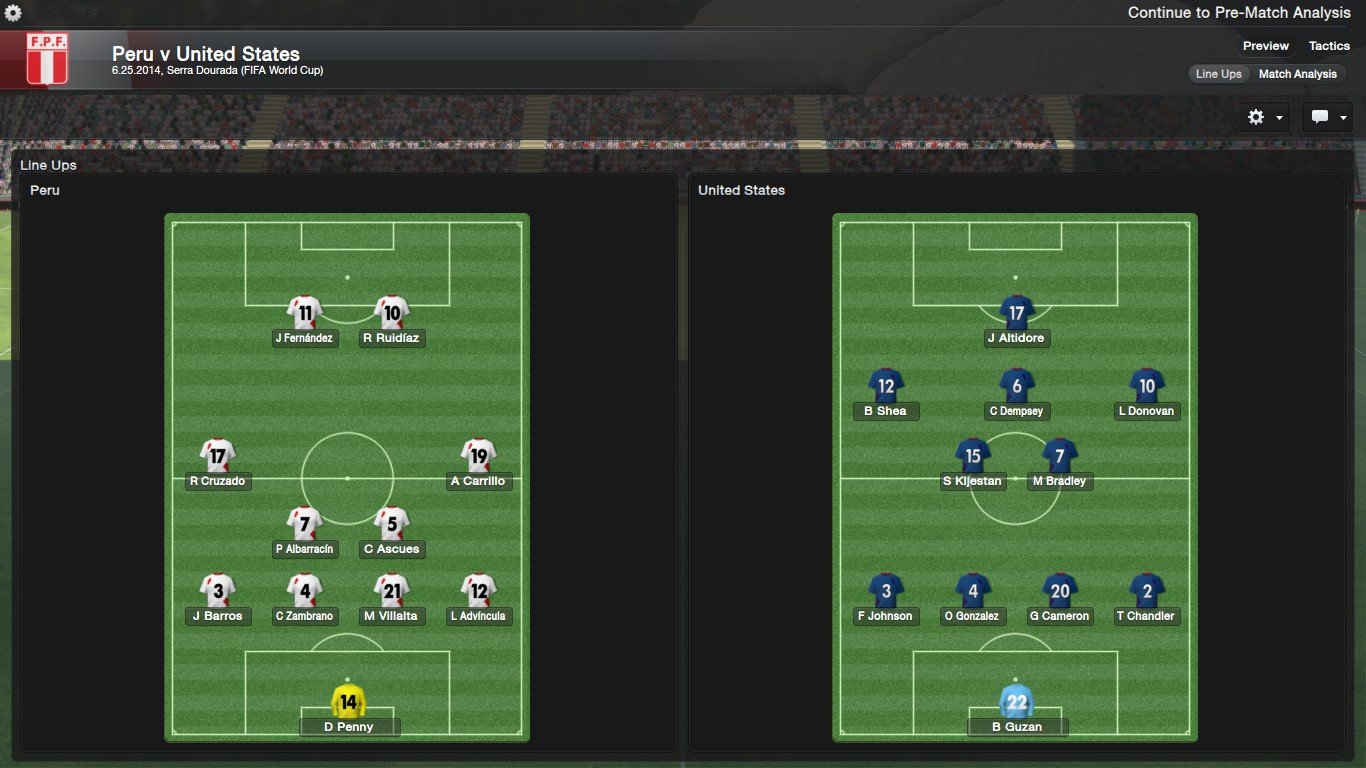 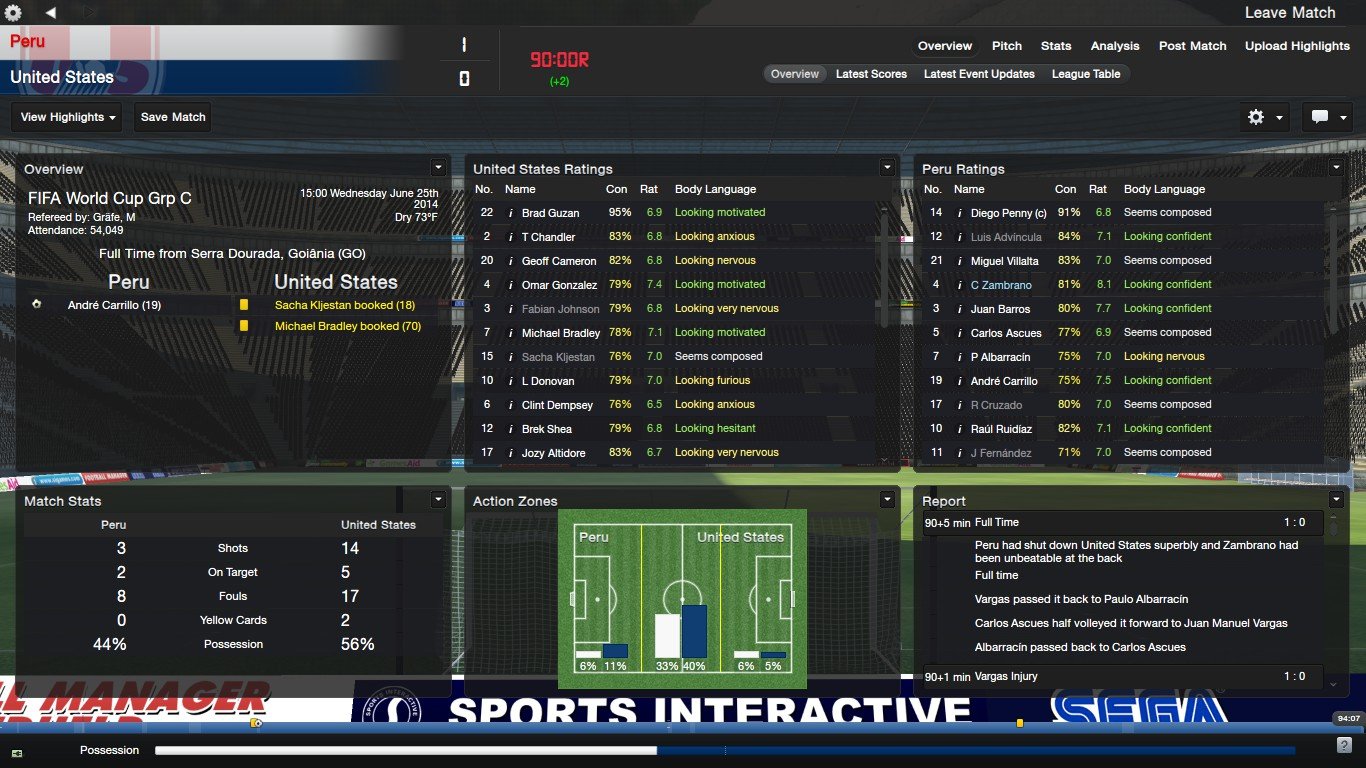 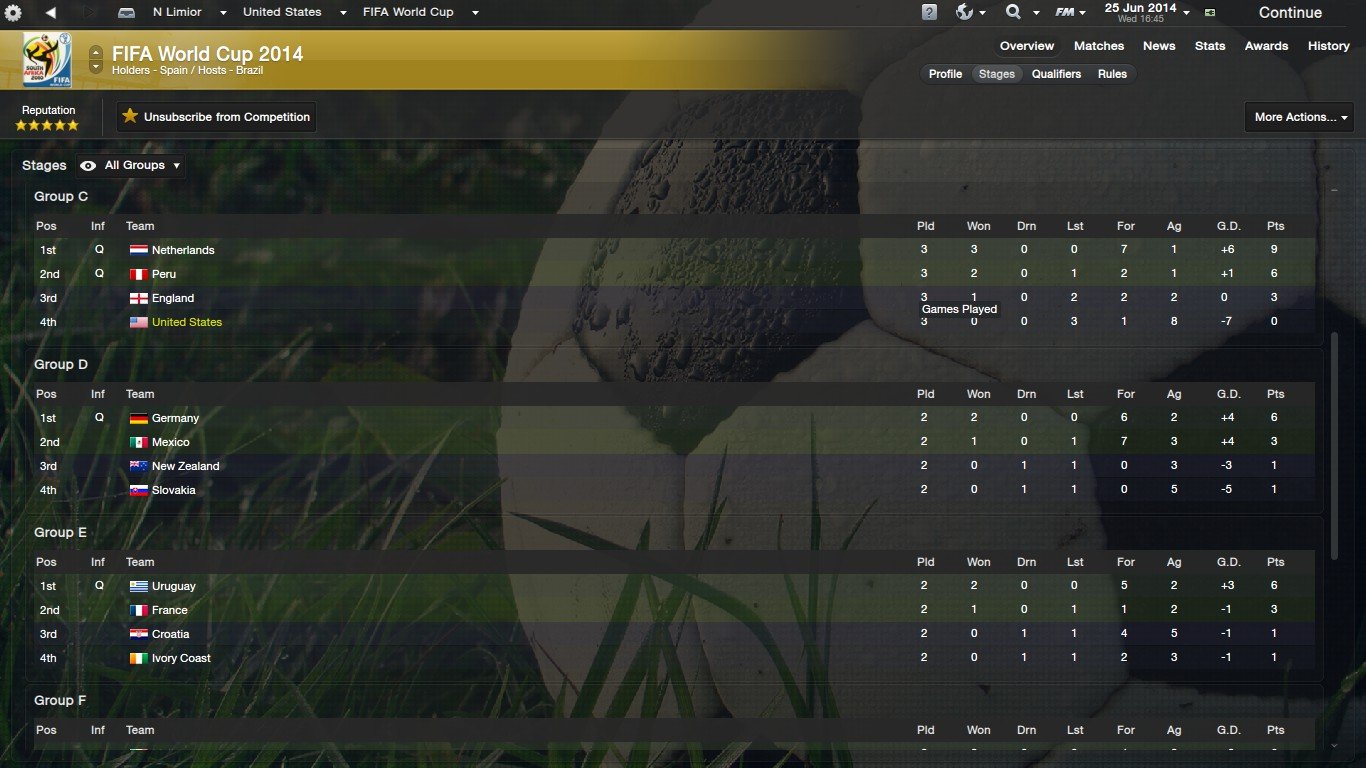 Netherlands and Peru qualify, and you can see what happened to the US. We failed to take a single point! Very disappointing, but I knew something like that could happen in our group. No excuses though, we still failed. So...

Should Limior resign the US job and move into club management? Should Limior focus on the 2018 World Cup only? Should he do both? If he takes a club job, where? I'd like to hear your ideas!
Login to Quote

Rablador
9 years
Ouch, some horrible results there. Stay as manager by all means, though. Onwards and upwards!